I ventured out of Edinburgh for a hike this week, instead heading west to the Loch Lomond and Trossachs National Park. This is a beautiful area of Scotland, well worth exploring. I’ve been before, but there’s always new parts to see, and I don’t get to go that often, as it’s difficult to access much of it by public transport. I was going with a friend who drives though – I very much appreciated her driving me places like this! The weather forecast was pretty wet and overcast that day, so we picked a hike that wasn’t too long or strenuous, as we didn’t want to run into any potential problems, stuck halfway up a mountain in the pouring rain! So this Callander Crags route seemed to fit our criteria well.

We started off from the Bracklinn Falls car park (further up the road than the Crags car park!), as it’s very easy to combine both these routes into one. This is just a few minutes outside Callander, a small town on the eastern edge of the Trossachs National Park. The route is easy to follow, and it’s a well trodden path to the waterfall. We were wearing hiking boots anyway, which proved to invaluable when we reached the crags later on, but Bracklinn Falls themselves are very easy to get too. We arrived pretty quickly, and spent some time taking photos of them, and of the bridge spanning the river, which had a pretty cool design. The path then took us round to the top of the waterfall, before veering away into the foliage.

We continued up a narrow pathway, through trees and bushes, which rapidly climbed higher up the hillside. This part felt pretty strenuous, as it was a fairly quick ascent! Then we joined a much wider, paved path that led us through a thick pine forest. The rain started to come down pretty heavy at this point, so we were glad the forest provided some coverage – but of course, we were well equipped with raincoats and umbrellas anyway! We soon emerged from the forest, and realised we were pretty far up the hillside by this point. The view ahead opened up to more hills, and a valley stretching between them, though it was pretty misty from the rain and cloud, as you can see from these photos. 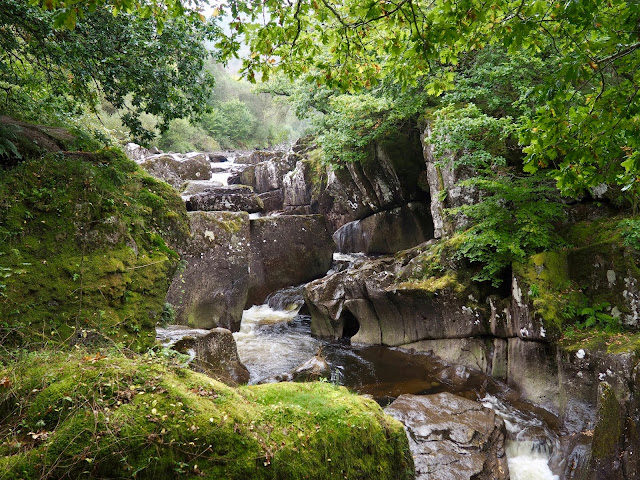 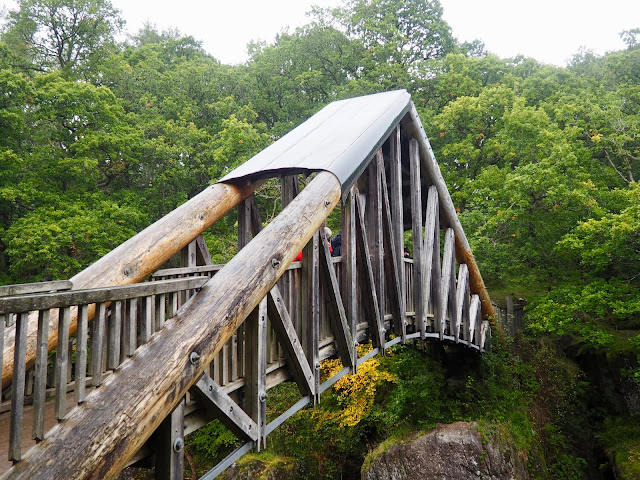 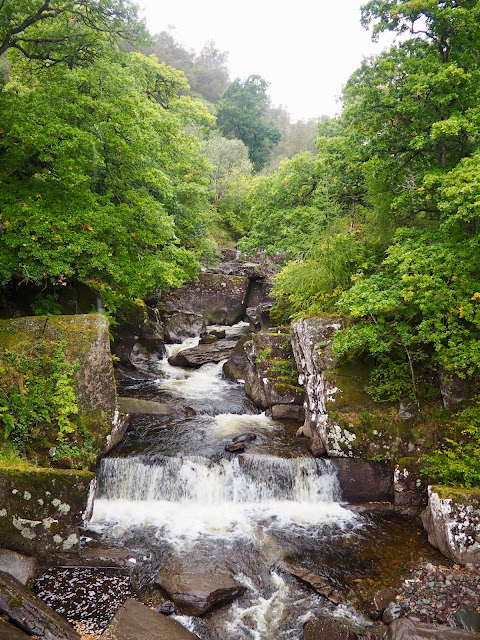 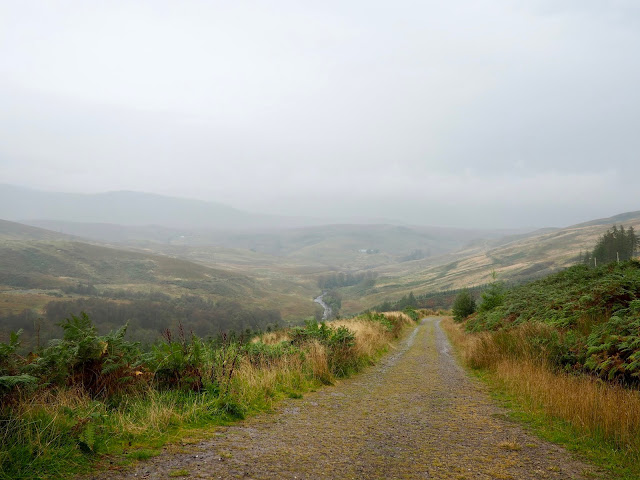 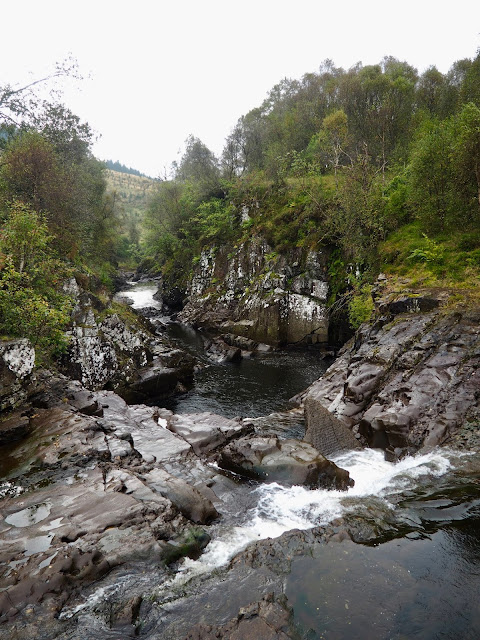 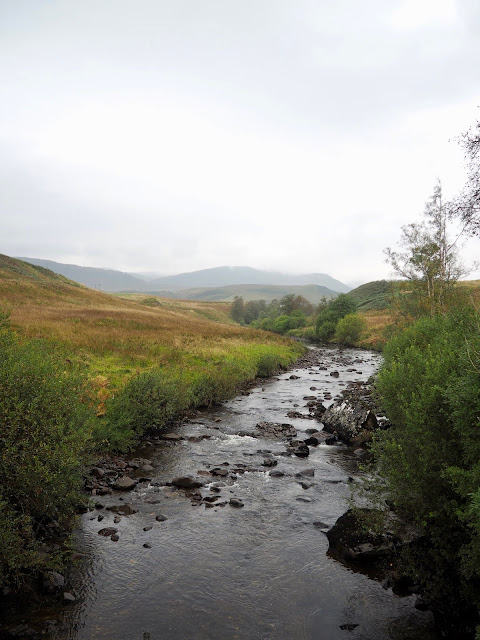 We followed the path down into the valley again, sticking to the left where it forked, to the river, Keltie Water, again. There was a much smaller waterfall (Scout’s Pool) with a bridge over the top of it. There was a small path that would take you to a viewpoint below the falls, but it looked pretty muddy so we gave it a miss. We climbed a little ways uphill again on the other side, before reaching a paved road, where we turned left. The route stayed pretty level for a long time here, as we meandered along the valley, between all the hills. The rain had let up by this point, but our views were hit and miss, with the clouds sitting so low, and drizzle starting up from time to time.

There were also a few cows around the area here, which largely ignore walkers like ourselves. However, we did encounter one very pregnant looking cow who was coming down the path pretty quickly, and mooing loudly – we’re pretty sure she was just looking for her friend, but we got out of her way just to be sure! Luckily, we were turning off the main road at this point anyway (near telephone pole 34), to follow a narrow path leading uphill to the right. This would take us to the top of the Callander Crags. The ascent itself wasn’t too strenuous, but the path is narrow, muddy, and rocky – which is the case pretty much all the way along the top of the crags too – so you do have to be careful as you go. 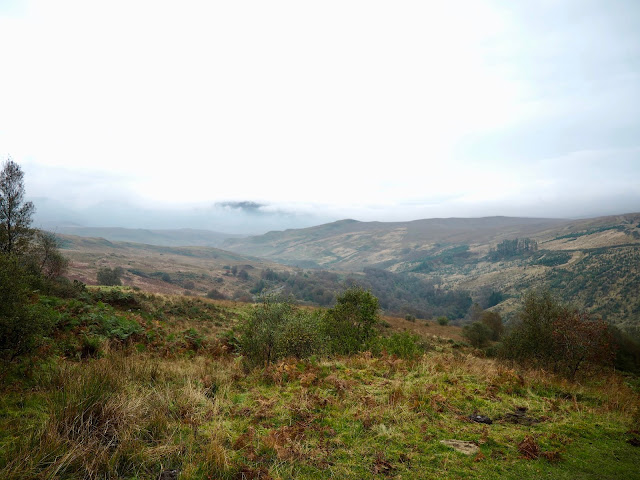 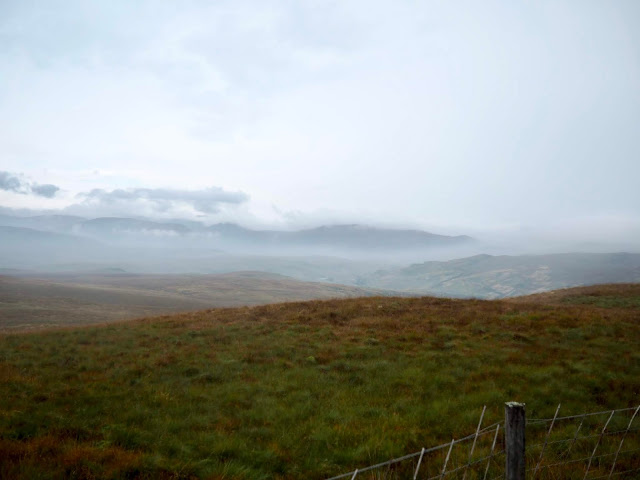 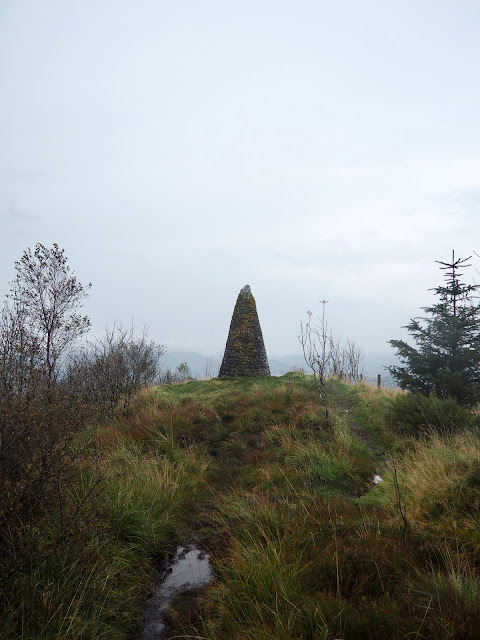 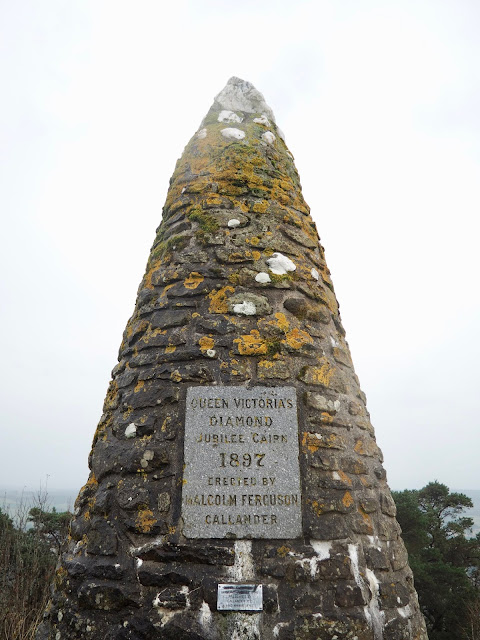 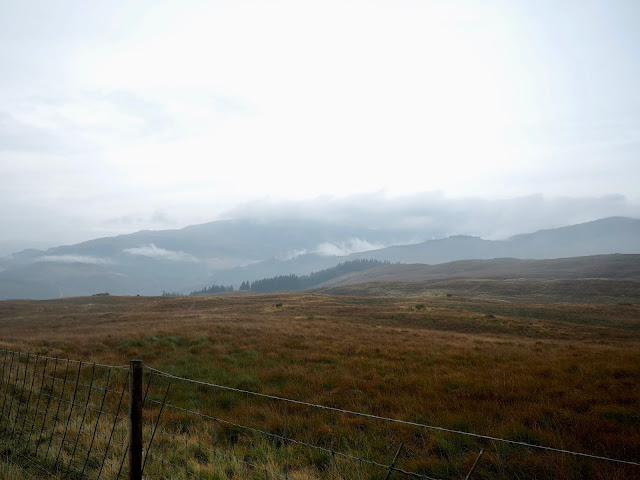 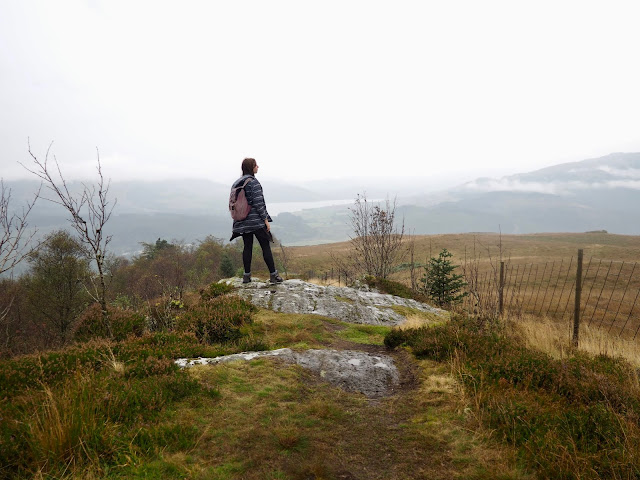 As we approached the top of the crags, we were able to see more of the views again, with some atmospheric looking clouds sitting on top of the hills. The largest visible hill is Ben Ledi, on our right, though there are plenty more smaller ones around the area too. The crags drop down steeply on the left hand side, and through gaps in the trees here we could see back down to the town of Callander. On a clear day, apparently you can see as far as Stirling and the Wallace Monument, but it was too overcast that day for us. In the middle of the crags there is a cairn, which was built in the 19th century to celebrate Queen Victoria’s Jubilee. As we continued along the top, we could also see over to Loch Venechar, one of the smaller lochs in the national park.

Not long after the cairn, there is a steep path down to the left, which you can take if you want a shorter walk. However, we opted to keep going straight ahead, all the way to the other side of the crags. As the path starts to descend again, we soon found ourselves in a forest once more, though this time deciduous. The path got wider again, but be aware, there are some rocky scrambles down in places, which are slippery in the rain! It was pretty tough going on my knees actually, which don’t cope well with steep descents. The descent was quite fast though, and then the path curves back around on itself to the base of the crags. From here, you can walk to the main road and through Callander to get back to the car park. 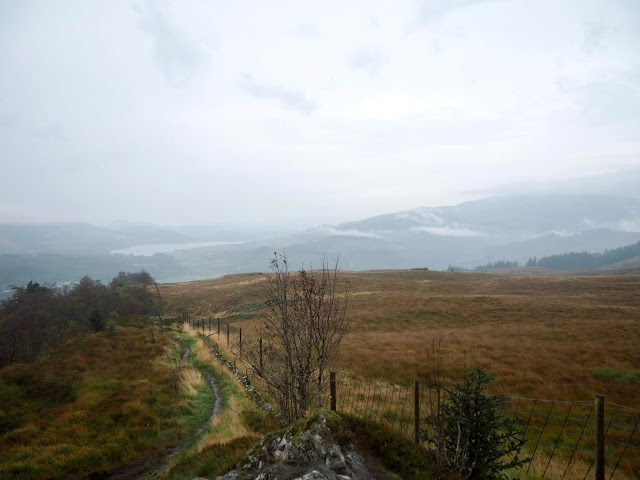 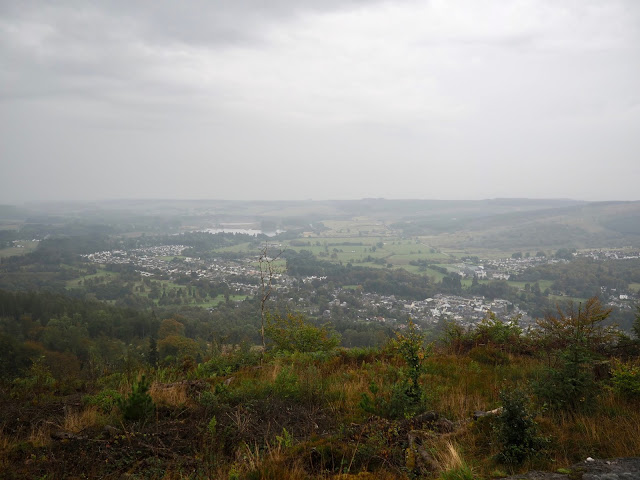 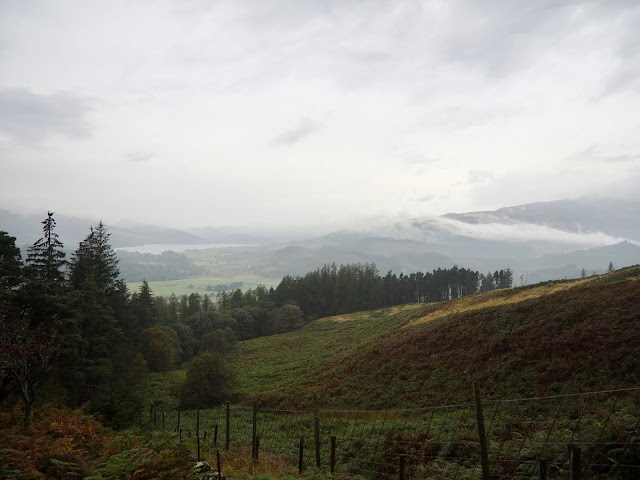 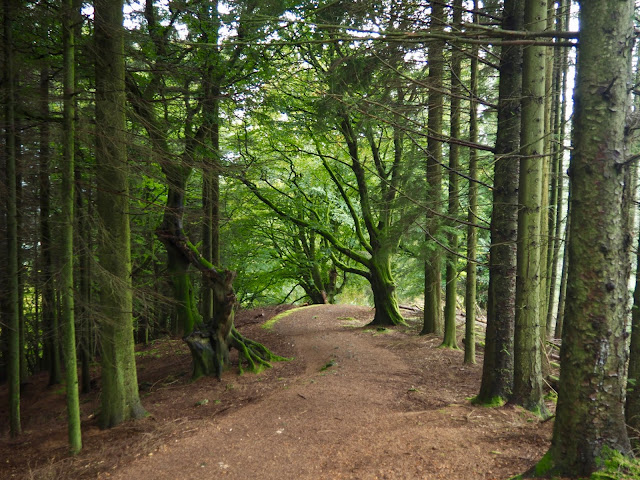 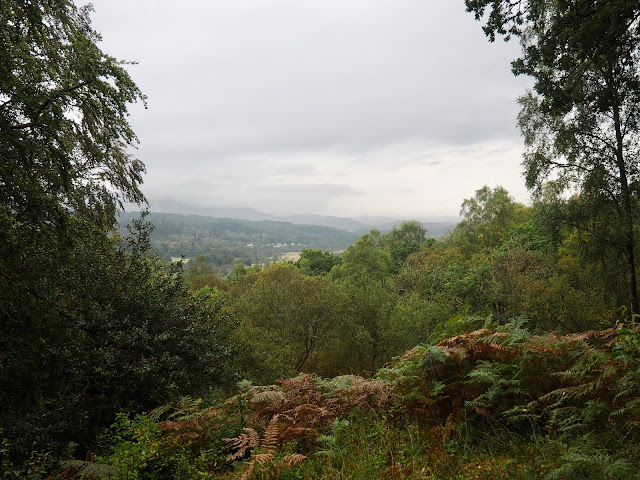 Or, do as we did, and take the lower crags path through the forest instead. We had assumed this lower path would be a flat, level walk through the trees, but instead we did have another ascent in the middle of it again! Nothing unmanageable, and this path is wider and more trodden than the upper paths were, but it did come as a bit of a surprise when we were starting to get tired anyway! It’s an easy path to follow though, with just one small viewpoint by a bridge over a gully where the trees open up. Mostly, it’s under the cover of the forest though, and it soon led us to the Callander Crags car park. From there, it was a short walk up the side of the road – note that if a car comes along, it’s best to step down off the side of the road, as it’s quite narrow for them to drive on! – to take us back to Bracklinn Falls car park.

We headed down into Callander after that, to stop in a quirky little cafe called ‘Fat Jack’s’ for a coffee, and to rest our feet and warm up again. We wandered through the town as well, which is worth doing if you can, as there are lots of small, interesting local shops to check out. Mostly we were just browsing, but we did end up buying a couple of things – I even