I finally had a full day off work last week, so I used it to get out Edinburgh for the day! We finally had some summer weather too, so I was eager to check out a new hiking route. Well, to be honest this route is pretty level so it was more of a long walk than an uphill hike. Though it also sounds mad that given that I walk hours every day at work, I used my day off to do even more walking! Anyways, I’ve never done any part of the Fife Coastal Path, which runs all the way around Fife and would take several days to complete the whole thing. I just chose one section for this day, stage two, which is supposed to be from North Queensferry to Burntisland, but I did it in reverse, and opted to stop early at Inverkeithing instead. 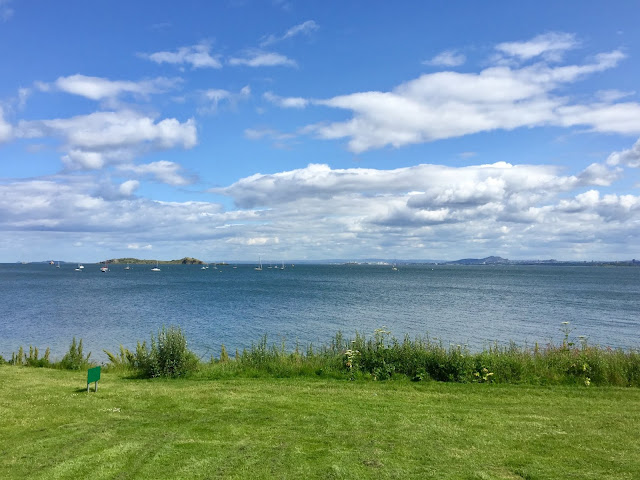 I started by taking the train from Edinburgh to Burntisland, a journey which only take about half an hour or so. The Fife Coastal Path is pretty well signed throughout, so it’s not too difficult to find and follow. I had to walk through Burntisland first, which is a small town I hadn’t really heard of before, but reminded me of the small town I grew up near. It’s a little unclear where the path is as first, when you’re just walking through town streets and counterintuitively moving away from the coast, but you just keep an eye out for the markers and you’ll find it! It follows alongside the railway tracks at first, with houses to the other side, before eventually leaving the town and winding through a woodland area.

Through breaks in the trees, I could see the railway again, and I was pretty close to the coast again. The woodland was pretty calm and quiet – I passed a few other people throughout the walk, mostly going in the opposite direction, but overall it wasn’t that busy. At one point, shortly after crossing underneath the railway, I took a detour down to a pebbled beach to look out across the water. This is the north side of the Firth of Forth, so Edinburgh is on the other side, and on a clear day like this I could make out Arthur’s Seat and the Castle, as well as the larger Pentlands behind it all.

The path emerged from the woods a little, running even closer to the water on well paved path. I could soon see Silversands Beach up ahead, just outside Aberdour. Although it was a weekday, it’s now the school summer holidays, so it was full of children playing. It still took a little while to reach, but it was a nice view to be walking towards. Just beyond the beach, the path wound uphill to a headland area, where you can climb over a stile to stand on the clifftop. On the other side of the headland, you can look down to Aberdour, and all the fishing boats anchored there, and the Forth Crossings and Inchcolm Island become visible further up the Firth of Forth. The views of Edinburgh were still there too, with planes coming in over the water to land at the airport. 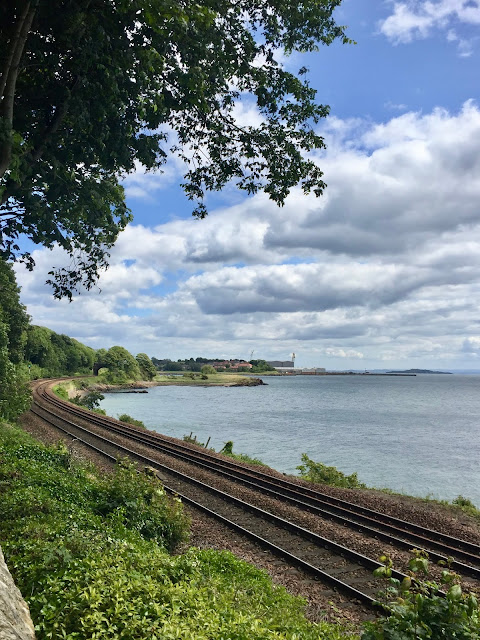 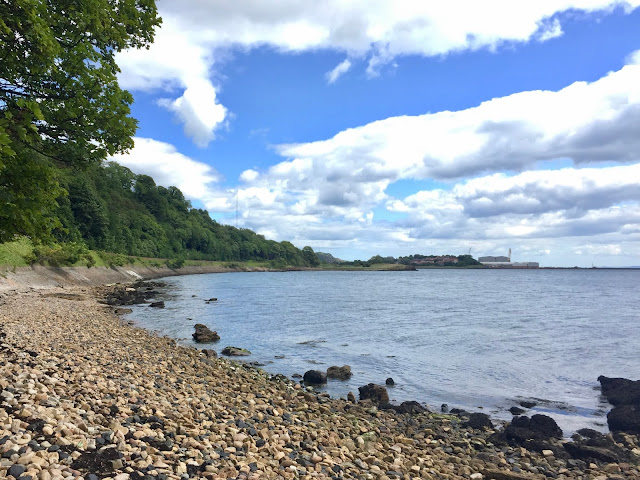 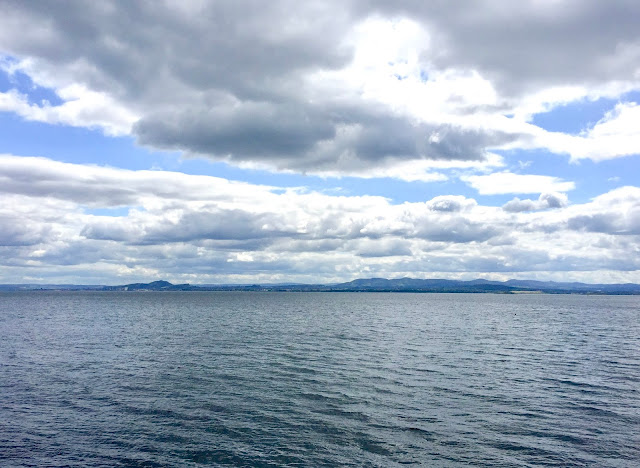 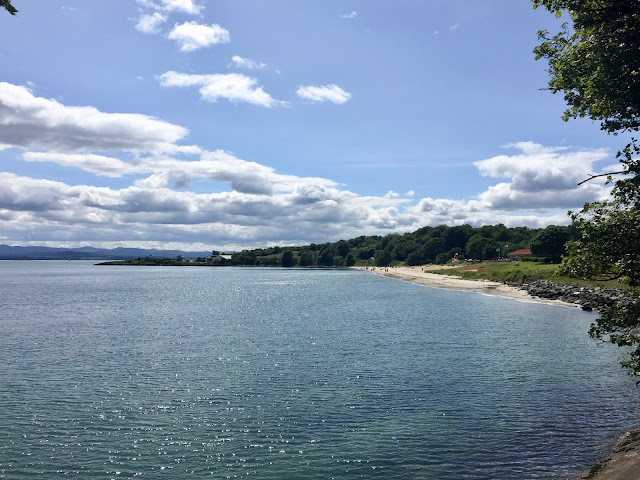 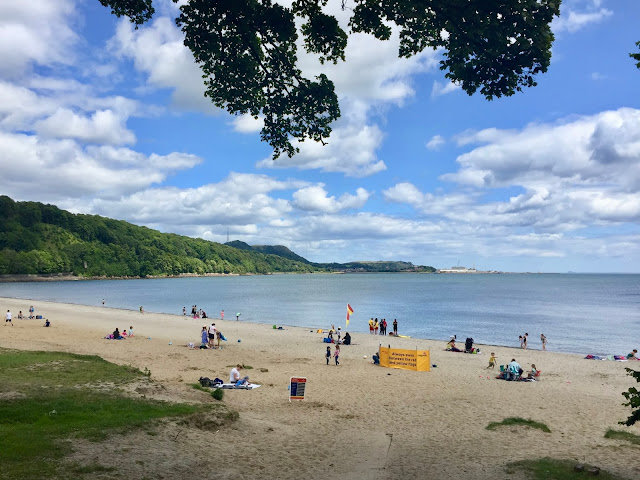 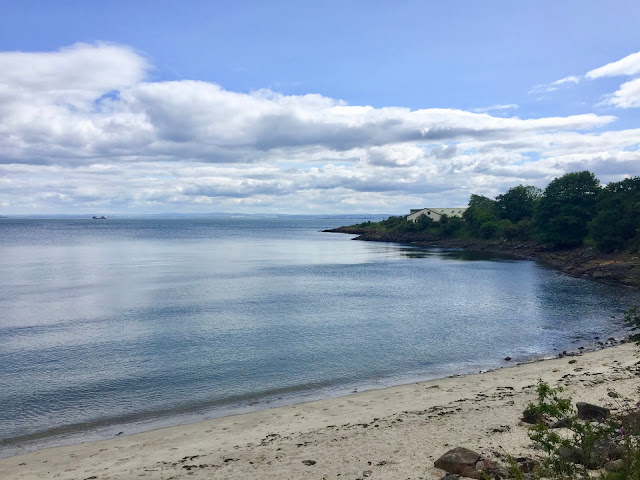 As I came down the other side of the hill, towards Aberdour, I did take a wrong turn. There’s a slight fork in the path as you go some stairs which lacks a Fife Coastal Path marker, and I turned right along the more level path. I soon realised my mistake and doubled back to go left, continuing all the way down the stairs. I carried on around Aberdour’s harbour area, where all the fishing boats are, and into the town itself. There’s another beach here, smaller than the first, before the path veers right and through the town itself. I was a little worried I’d taken a wrong turn again, but you just keep going straight uphill and another marker appears eventually.

The headland near Aberdour is actually a golf course, so the path takes you around the edge of it, which makes sense! Although it is a ‘Coastal Path’, there are points where it cuts around headland areas instead of hugging along the coast the entire time. This continues on the other side of Aberdour, when after the golf course, you pass by a lot of farmland, with fields of newly shorn sheep in the summer weather. While I love coastal walks, which was the whole reason I wanted to explore this route, I did enjoy the changing scenery around me, with something new to see all the time so it didn’t get too repetitive.

I wound back down closer to the sea eventually though, and came across the ruins of St Bridget’s Kirk, dating back to the 12th century. It’s empty and abandoned, with no roof, leaving it open the sky, and is surrounded by gravestones. You can go through the gate though to explore, as the stairs have been maintained, so I had a look around the building, and the kirkyard, which had more excellent views over the Firth of Forth. Shortly after that, the path circled the edge of a wide, flat bay, where I went down to the edge of the rocky beach to take a rest while having my late lunch. I had been walking for just over two hours at this point, so my feet were certainly starting to feel it! The good part about this section of the Fife Coastal Path is every town has a train station, so you can stop early if you want, whereas other sections of it have more limited public transport. I wasn’t done yet though, and continued on after my break. 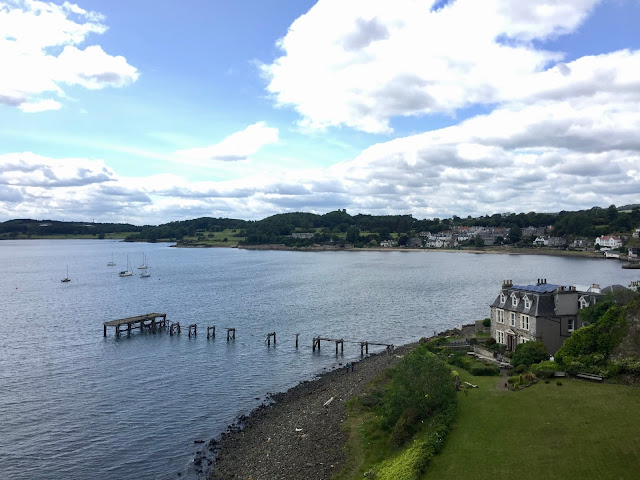 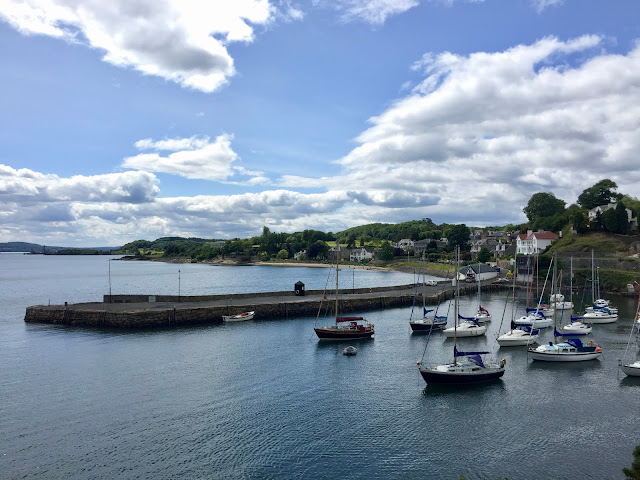 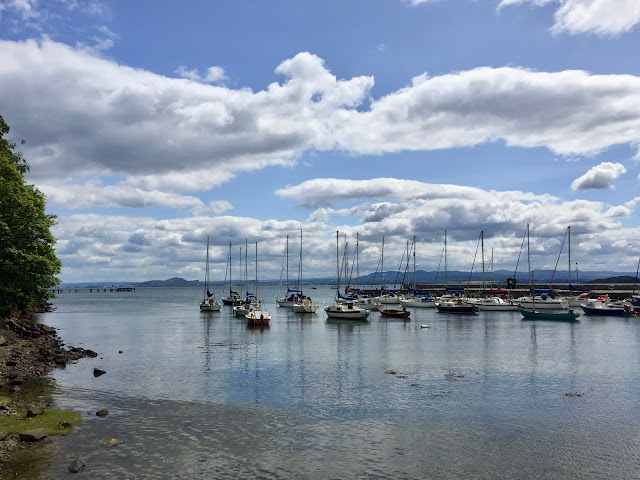 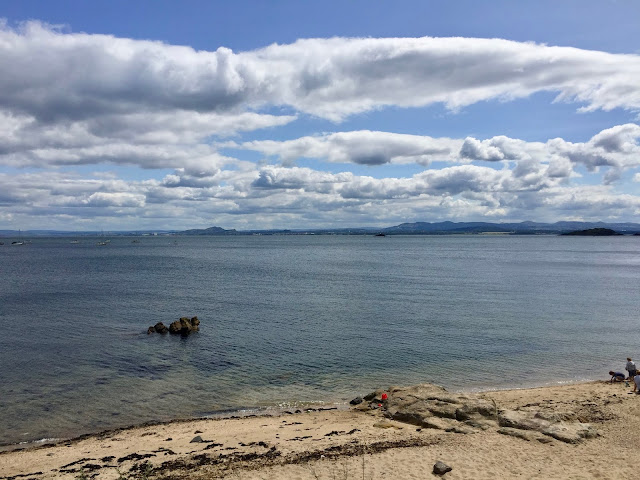 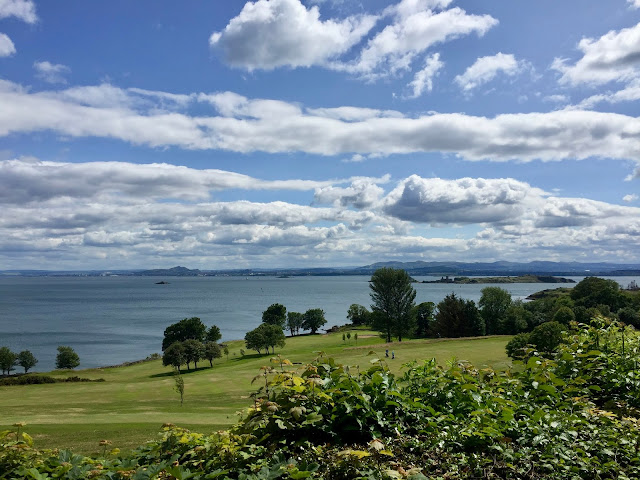 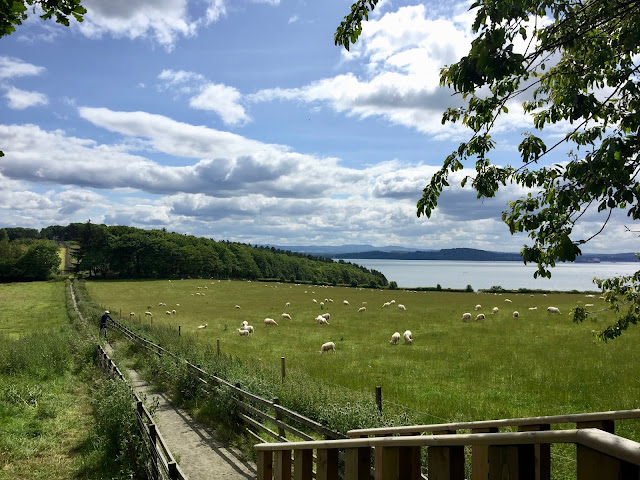 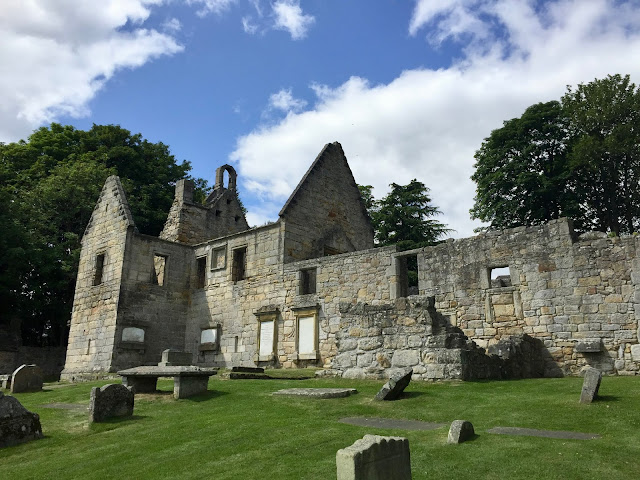 I soon reached Dalgety Bay, and was very quickly enamoured by the houses here. Unlike in the other towns I’d passed through, every house here was different, individually built instead of mass developments, and they were just beautiful houses. Add on that incredible view – I think Dalgety Bay has the best views along this section of the route! – and I could absolutely see the appeal of living there! There’s well maintained park areas along the waterfront as well, to sit and soak in the views. You get a full panorama at this point, all the way from Arthur’s Seat and Edinburgh, right around to the Forth Crossings. The town was a little bigger than I’d thought at first, with newer developments further around, beyond a small stretch of woodland. There’s good views of Inchcolm Island here as well, and you can make out the ruins of the abbey there.

As the path continued out of Dalgety Bay, Edinburgh started to disappear into the distance, but I was getting closer and closer to the Forth Crossings, with the railway bridge visible clearest at the front. I continued past a small stretch of beach on the outskirts of the town. However, beyond that things were a little less scenic. I started to hear some loud machinery noises, and soon spotted large construction type equipment across the water, on the stretch of land between Inverkeithing and North Queensferry. The best of the coastal views were behind me now, and I was walking along past sort of scrubland, before quickly reaching Inverkeithing, another small town similar to the previous ones.

This was the point when I opted to end my walk here. Initially I’d thought I’d perhaps continue on to North Queensferry, but I was pretty tired at this point, having walked over 3 hours by now, and it would be another 40 minutes to get there. I think it would have made the difference between ‘that was a nice day’, and ‘bloody hell, I’m exhausted’. And that heavy machinery that lay in between the two towns was a bit off putting, so I didn’t think the views and scenery would be any better than what I’d seen so far. So instead, I followed the town signs towards the train station instead, and only had to wait ten minutes or so for the next train back to Edinburgh. 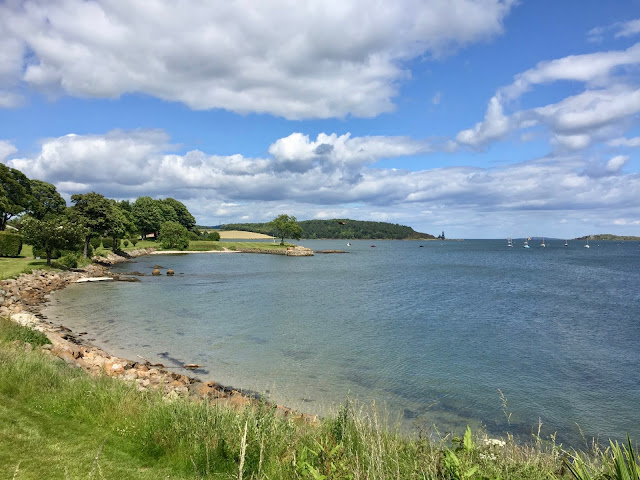 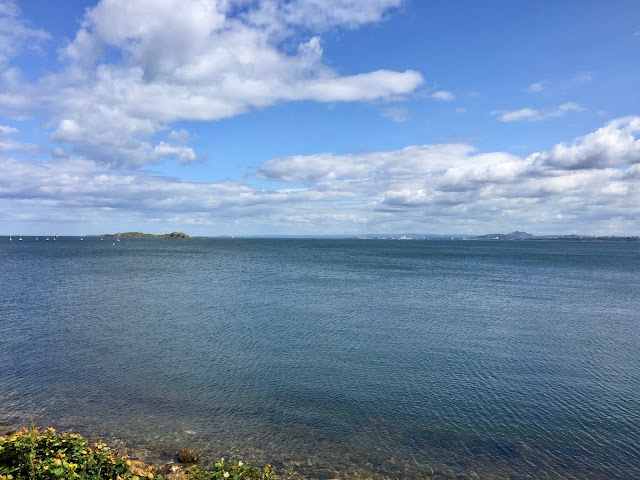 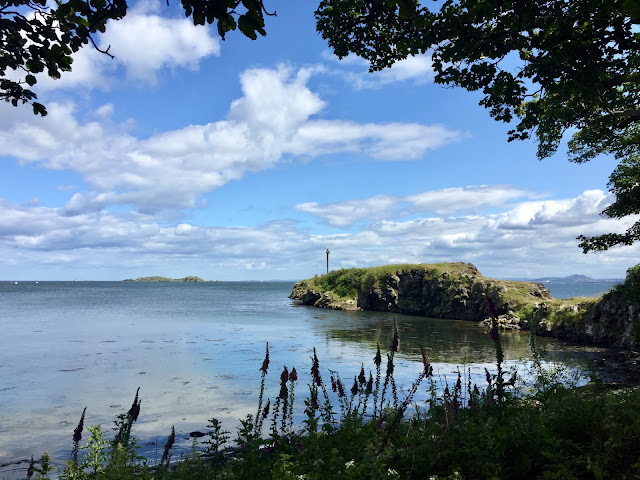 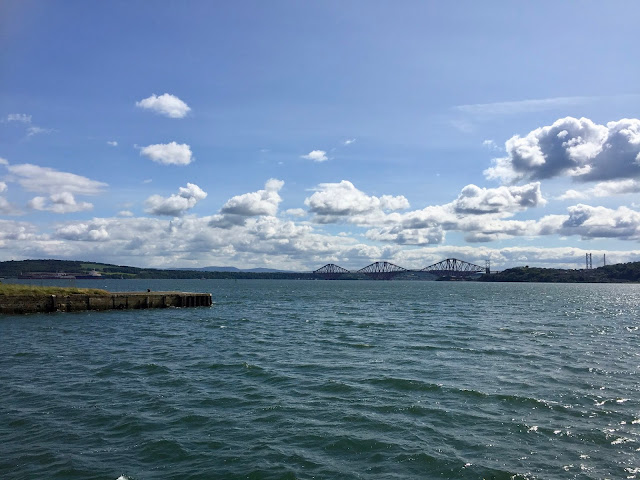 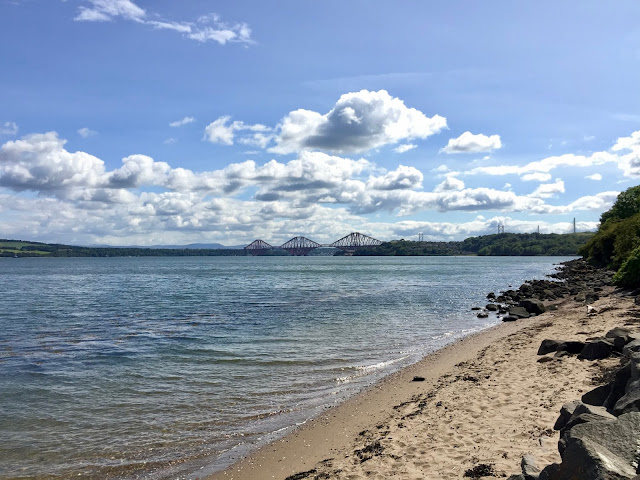 It was a really nice day out overall, and I got lucky with great weather for it. I was definitely tired by the end, and my feet hurt even in hiking boots, but it was that good, satisfied kind of tired. I like going on long walks and hikes like this, and I do a lot of thinking and reflecting, as well as plenty of daydreaming on them! I always enjoy being by the coast – I do like hills and mountains for hiking too, but the coast is always my favourite – and the views here were just fantastic. I was amazed by how many details I could see in Edinburgh from that distance, but it was such a clear day! This was my first venture along the Fife Coastal Path, but there’s plenty more of it, so it probably won’t be my last!