Musings from a Tourist Town

The cobbled streets weave in and out of each other, a never-ending maze where every corner looks the same yet entirely different. The buildings stand tall on either side, towering precariously high overhead, their rough stonework marked with centuries’ worth of stories. Behind each set of dark wooden shutters, dozens of families have lived and worked and loved and toiled, generation after generation calling these streets their home. 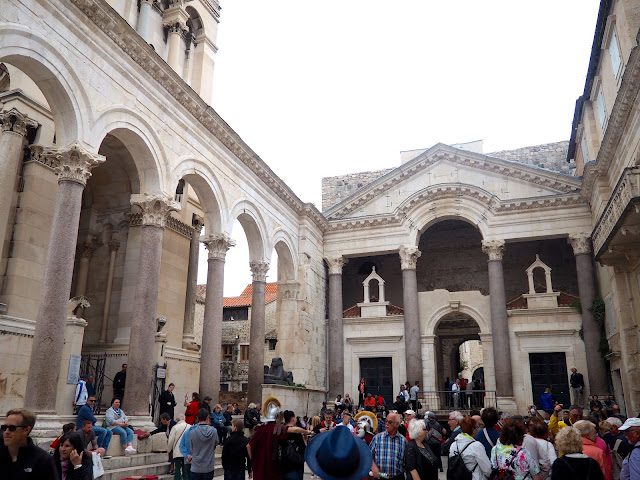 In the centre of town, lies yet more history. Buildings of grandeur and splendour, homes of statesmen or houses of God. Intricately designed creations, that took years of dedication and labour to construct. Monuments to human ingenuity and passion, built to stand the test of time, to be seen and admired and marvelled at by thousands over the years. Old and worn and used, but still spectacular and beautiful and awe-inspiring. Here was where the ruler lived; here was where they made state decisions; here they came to pray; here they defended their city; here they met and talked and traded and sold; here they lived.

A white flag bobs on a metal stick through the ancient, majestic streets. A microphone lies beneath it, yammering in a non-stop stream in some foreign language. A horde of headphones follow along, only half listening to what they’re hearing, while they snap photo after photo, and spill away from the group, swelling out and blocking the path, ignorant of anyone else trying to get by. Another group with another flag, in another language comes from the other direction, and they all squeeze past each either, neither considering stopping to let the other by first.

Below the shutters, under the stone arches, sits shop after restaurant after shop. This one sells t-shirts and shot glasses; that one sell shot glasses and t-shirts. This one has pizza and pasta; that one has pasta and pizza. The windows are ablaze with colourful stock, and laminated menus with unrealistic photos of food rest on stands outside. Everything starts to blend together into one long mass of commercialism.

It’s loud and it’s crowded. People shout to their family members, screaming down the streets in every language under the sun, or hold obnoxiously loud conversations that everyone in the vicinity can eavesdrop on. They barge along in a stubbornly straight line, never side-stepping anybody, or push their way through to the front of the crowd and ignore any concept of queueing. There are waterproof ponchos and a million DSLR cameras and flip flops slapping against the cobblestones and bum bags for days.

And then three hours later, they’re gone. Hustled back onto their coaches and cruise ships, off to see the next destination. The streets are calm. The shops and restaurants all pack up for the day, breathing a sigh of relief before it all starts again tomorrow. The town’s inhabitants cautiously venture out of their houses, nodding and smiling to their neighbours, the families who have lived next door for years. They tread the same paths as their ancestors, reliving their memories, and then casting their own new stories into the stone of the streets. Life goes on, as it always has.

Inspired by recent trips to Dubrovnik and Split, Croatia.