The other day I wrote the first post about my trip to Dundee a couple of weeks ago, involving a stop in St Andrews on the first day. I was visiting my cousin, who will tell you firsthand that there isn’t loads of things to see and do in Dundee itself (though we did wander round town to see some of the main sights, like the Tay Railway Bridge and McManus Galleries). However, for the other full day I had there, we decided to get out of the city again, and take another day trip, this time even further north, to the town of Stonehaven, and the nearby Dunnottar Castle. 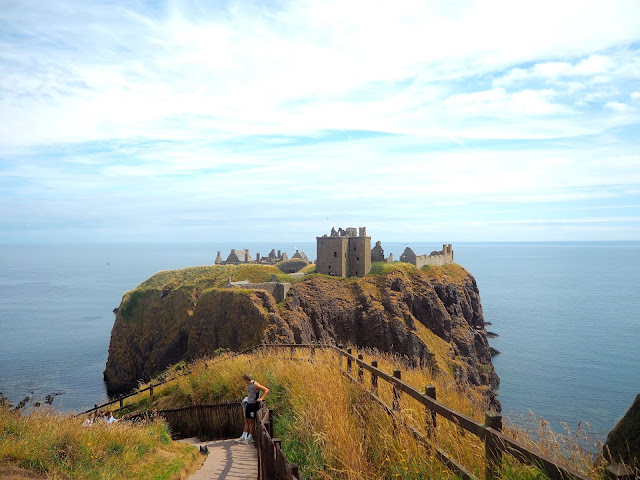 Stonehaven is easy to reach, as its on the main railway line between Dundee and Aberdeen, so there’s plenty of regular departures throughout the day. We arrived late morning, having gone out for breakfast in Dundee first. Stonehaven is a pretty quiet place, a sleepy seaside town on the east coast, by the North Sea. We made our way down through the town, until we hit the coastline, and the pebble beach there. As we walked along the beach, we came across these little metal sculptures dotted around the shore, featuring boats and a lighthouse, to suit the town itself. They were incredibly detailed, and there was even furniture inside the lighthouse!

After the beach, we reached the town’s harbour, a little port full of fishing boats and lined with pubs – which we took note of for later! It was a quaint area though, obviously with some modern boats, but overall it felt very traditional and old-fashioned, mainly because it was so small. It’s the kind of fishing town you’ve probably imagined or read about before, and here it actually exists. However, we made our way past the port, and followed the path leading us uphill, away from the town itself, following the signs for Dunnottar Castle. We did an excellent view looking back over the harbour, after the initial ascent, where there is a little clearing beside the road with a bench, looking down on the town. 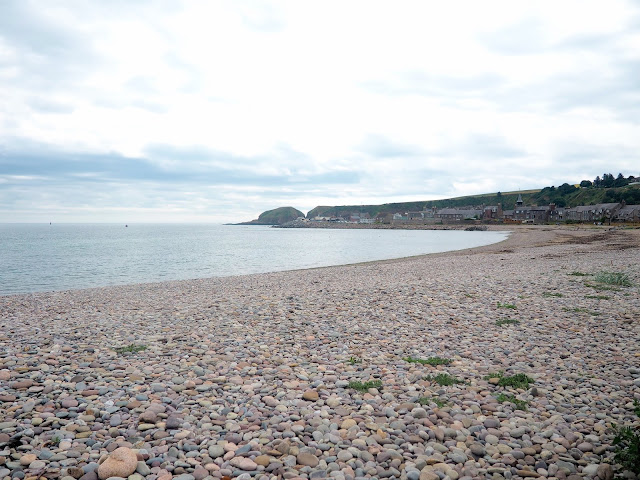 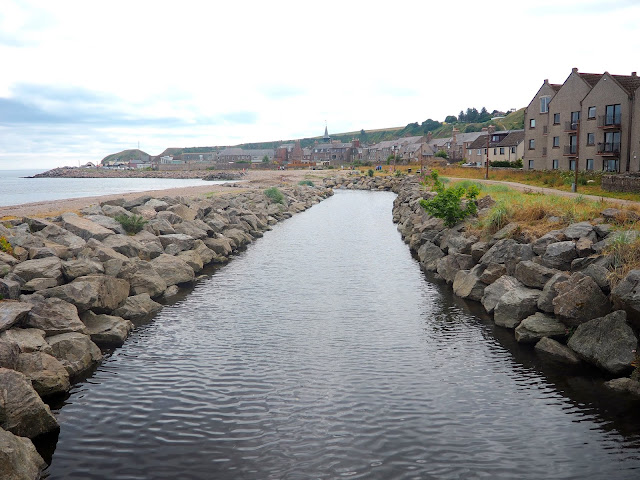 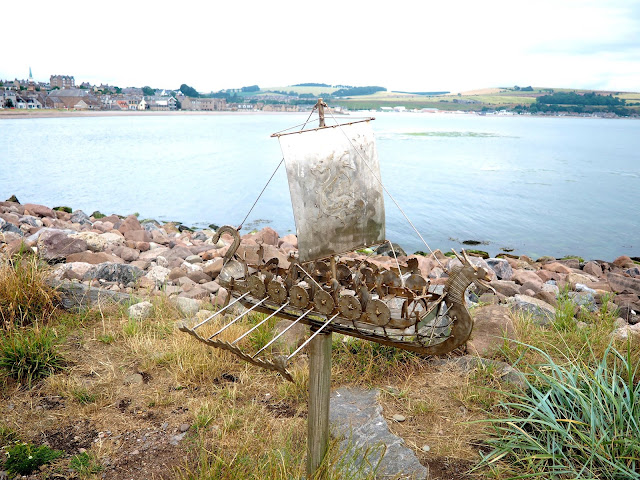 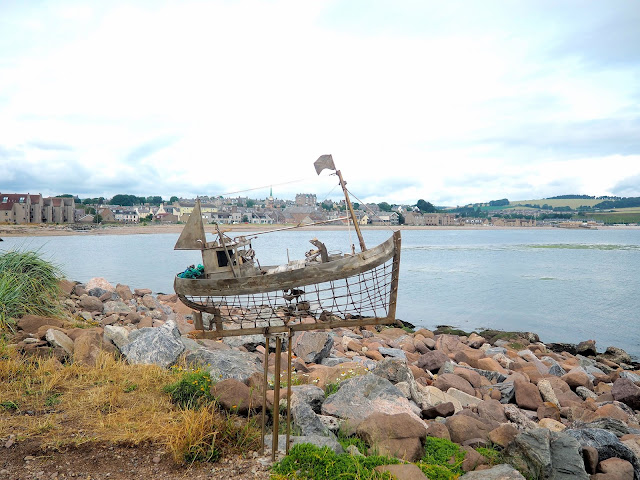 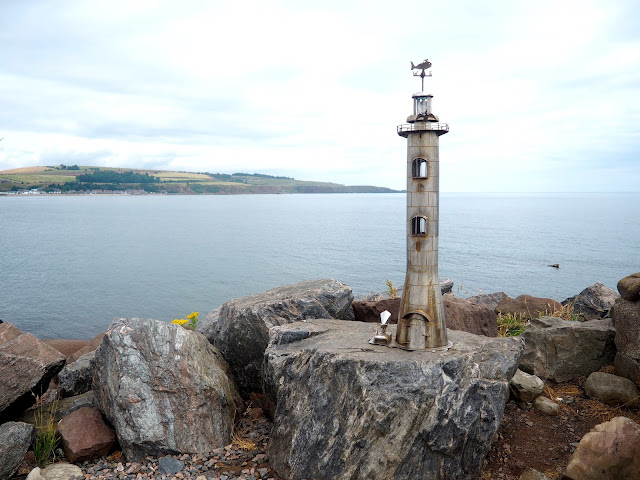 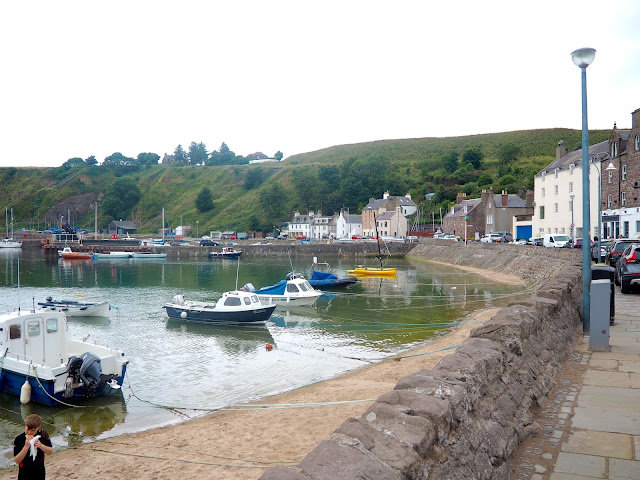 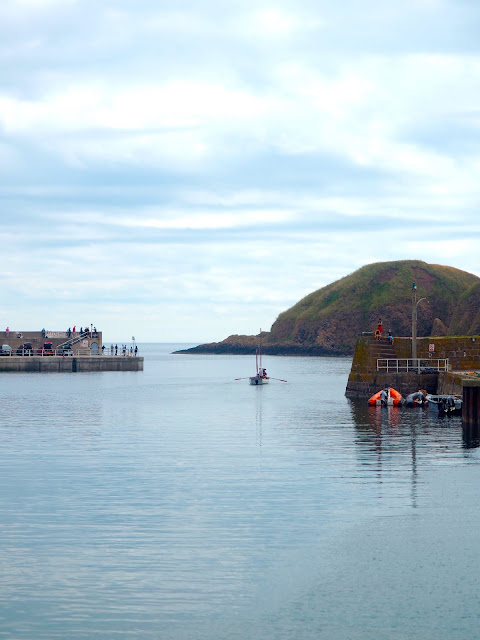 The walk then took us along the tops of the cliffs, around the coast to where the castle is situated. Before reaching it, we also passed a war memorial, this circular temple structure on the hilltop. We had to patiently wait for another group of tourists to move off the steps to get decent photos, as they were just lounging around on them, but our patience paid off in the end. It’s a pretty impressive monument up on the hill where it is, standing guard over the surrounding lands. It’s a small detour to get to the monument, and although it looks like there’s a shortcut to rejoin the main path, it involved a scramble down a steep hillside, so we doubled back to the main route.

The cliffs and views around the area were suitably impressive, that rugged sort of coastline that Scotland is known for. It’s very beautiful of course, but also quite rough and a little bit intimidating, on these wild, remote stretches next to the cold North Sea. The castle was in view from quite a distance back, but as we approached, we could truly appreciate just how magnificent it is. The buildings themselves are largely in ruins now, but the whole thing is perched on a rocky outcrop, nearly isolated entirely with the sea surrounding it on three sides, and connected to the mainland only by a narrow strip of land. You can see why it was built here, being an excellent defensive location to hide oneself away in, and a great lookout point to the sea. But it’s also a stunningly beautiful and unique location, making it easy to see why so many people come to snap photos of it. 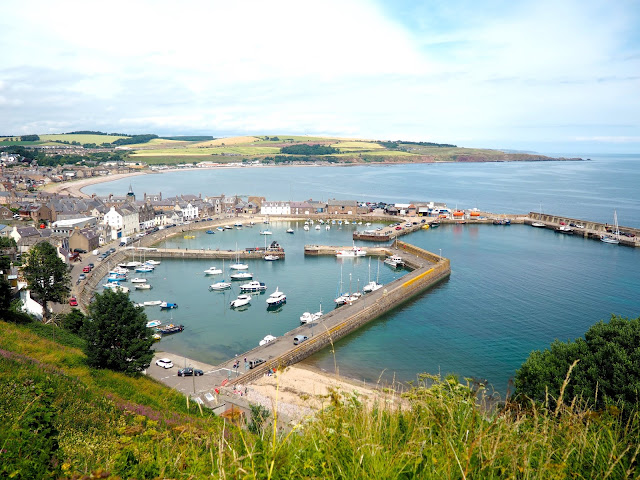 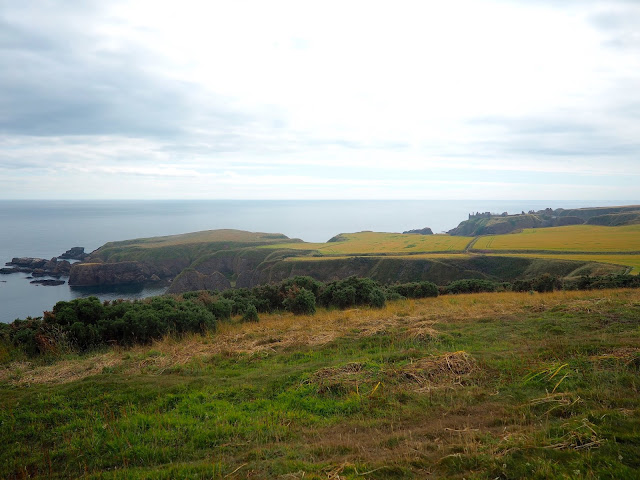 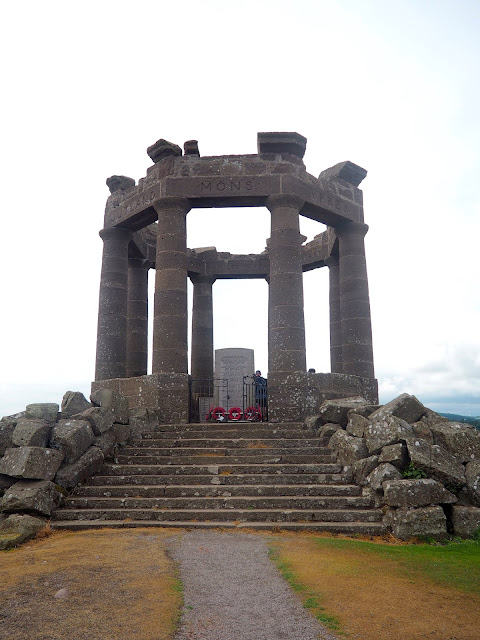 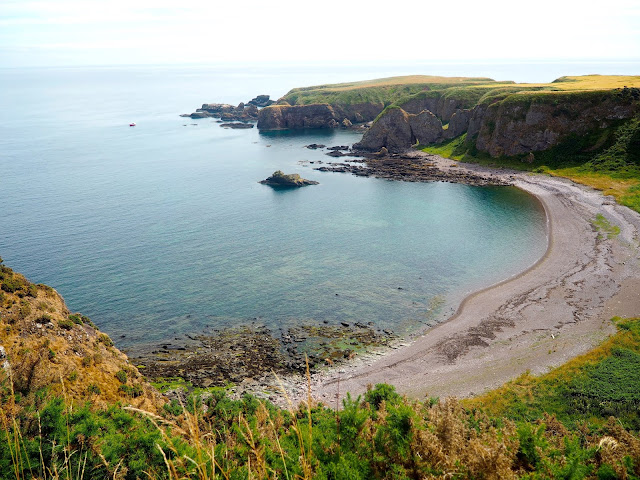 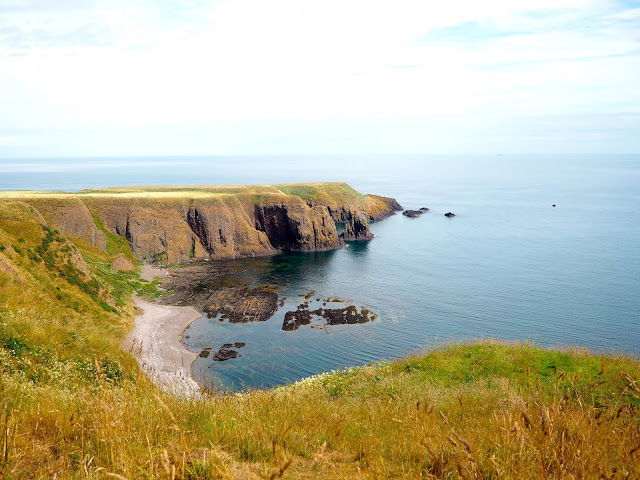 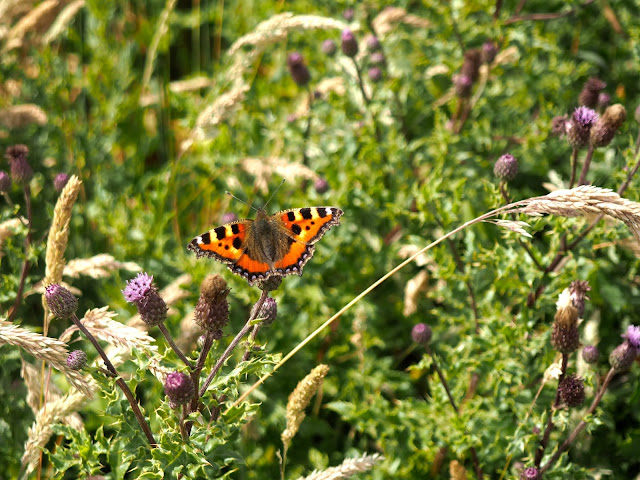 We opted not to pay the entrance fee to go inside, since we’ve both been to plenty Scottish castle, ruined or intact, before, but we did climb down the stairway to get closer to it – yes, that connecting strip of land involves going downhill, then up again to enter the castle. This took us on to the little patch of beach next to the castle, which wasn’t much to be honest, and then we had to haul ourselves all the way back up the stairs. We spent a good while admiring the castle from many angles though, wandering up and down the cliffs, and luckily the sun chose this moment to emerge, so the whole thing was beautifully lit, and the sea looked so clear and blue around it!

We retraced our route over the cliffs again, heading back towards Stonehaven, and ended up taking some of the same photos we had earlier again, now that the sun was out and the lighting was better – we couldn’t get over how blue the sea was! Once we returned to the town, we headed back to those harbour front pubs and managed to snag ourselves a seat outside to have some lunch and a drink. We also had to note the CDs dangling over the seating area, which are to scare away the seagulls, who will absolutely come snatch your food if you aren’t careful – definitely a good idea! 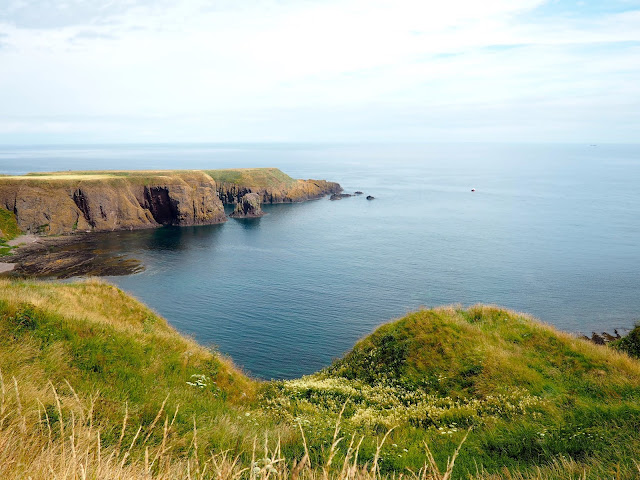 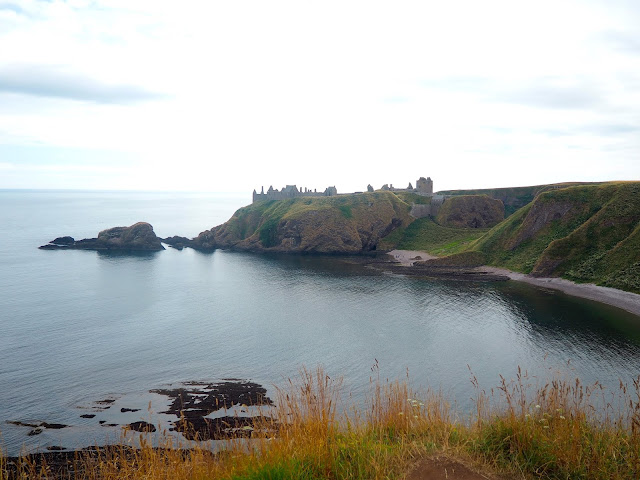 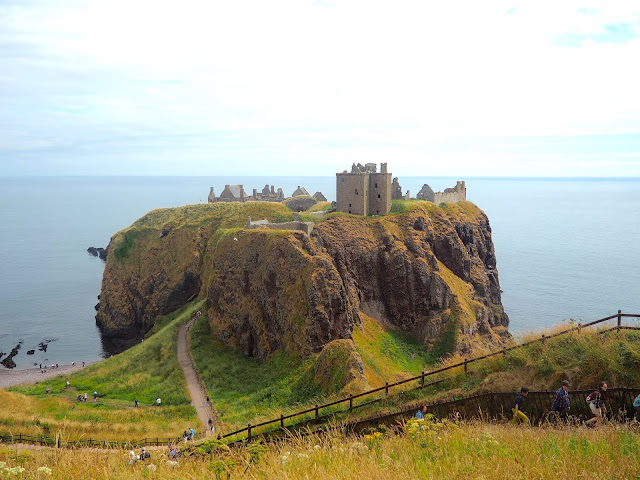 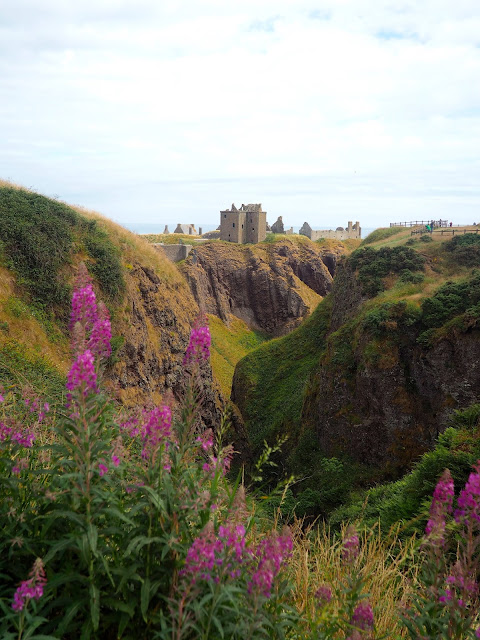 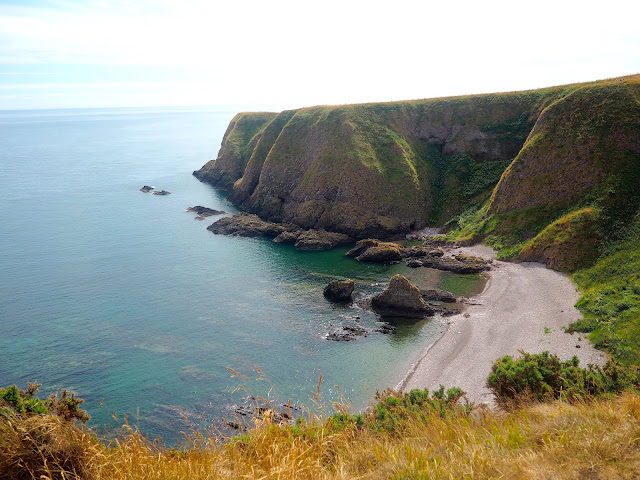 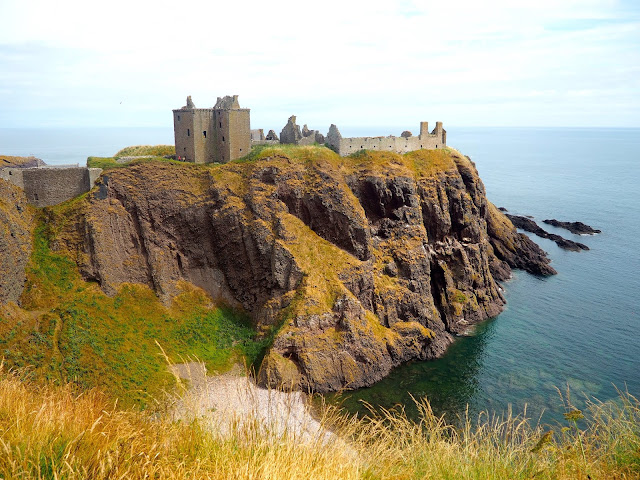 We had a little post-lunch stroll back along the beach, walking the length of the town more or less. Not many people were on the beach, since pebbles aren’t the comfiest to lie on, but the outdoor pool at the far end was pretty busy! Eventually we wound our way back up through the town, to catch the train back to Dundee. It was a nice day trip out, with Stonehaven being such a peaceful and picturesque town, and then Dunnottar Castle is simply breathtaking in such a spectacular location. I liked as well that these places clearly do attract tourists, but not as many as other parts of the country, since they’re a little bit more remote. A very enjoyable outing for the day!