Apologies for the long blogging absence readers, it’s been a busy few weeks! I just returned from a trip to South Africa, on which I was mostly camping, didn’t take my laptop, and had limited internet connection. As with all my previous trips, I fully intend to blog all about it, but due to all those factors, I realised it was going to be really tough to blog it as I went along. So instead, I decided to take a blogging break – which I was quite grateful for actually, to avoid stressing over no internet connection! – and keep a handwritten diary while I was there, which I’m now going to turn into posts! I’m estimating 8 posts in total, spanning a 16 day trip, so, let’s get to it! 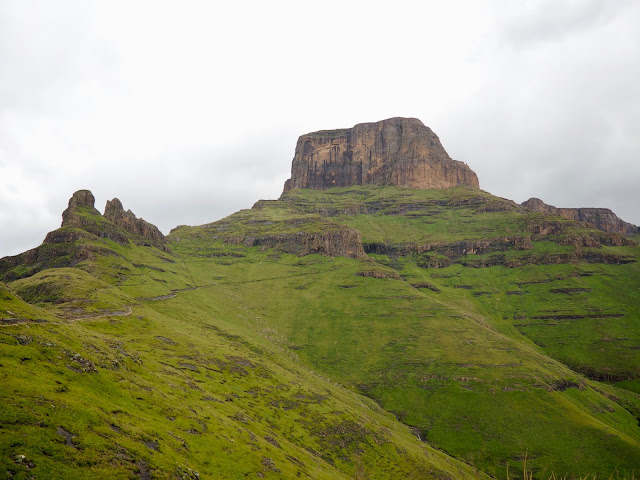 My trip actually started in Durban, where I was able to get a direct flight into from London. I was joining an Intrepid group tour, and Durban was the meeting point. I’m not writing a post about the city itself, as I only spent an afternoon there, and to be perfectly honest, I didn’t much like it. I walked up and down the beach front, which was fine but nothing special, and driving through the rest of the town from the airport left me with no desire to explore further. It’s a convenient meeting point for the group, with its international airport, but otherwise not really worth visiting I’d say.

After meeting the rest of the group (16 of us in total) on that first night, we departed Durban early the next morning to travel inland, to the mountainous region of Drakensberg. Most Intrepid tours use public transport, but for all their African trips, we go in specially built overland vehicles, big white trucks, with plenty of storage for all the camping and cooking equipment, and lockers for our valuables. The drive also gave me my first real look at the scenery in this part of the world. January is summer in South Africa, but also rainy season, so there were some grey, overcast days to come. It was very hilly, mountainous landscapes, quite green from all the rain, and almost a little reminiscent of Scotland! We passed many villages, or townships, on the way too, many of them poor areas composed of very simple houses, and populated predominantly by black people – the evidence of apartheid was fairly apparent throughout this trip. We arrived at our accommodation, Amphitheatre Backpackers, a lodge rather than camping, and definitely one of the nicest places we stayed during the trip, in the early afternoon.

The trip included a guided hike that afternoon, with our entrance into the Drakensberg National Park, led by our trip leader. The truck drove us up to the start point, and then we made our way along the ‘Cascade’ route, towards a waterfall. As hikes go, this was fairly easy going, since it has to suit all fitness levels within the group, and it only took about an hour and a half, there and back. It was a cloudy day, but we were surrounded by lush green scenery, with forest and grassy hills close by, and towering mountains encircling us further off. The region is named for the resemblance between these mountains and a ‘dragon’s back’. Our route followed the river mainly, crossing it back and forth over rope bridges and narrow arched stone bridges. We even got to see some Bushman paintings on a rock wall, centuries old, left by the early settlers of Southern Africa. We stopped to take plenty of photos by the smaller cascade, around halfway along the hike, and then again at the larger falls that we finished at. The route back was the same path in reverse, and the whole thing was a nice introduction to the region, but only a glimpse of what was to come the next day. We returned to the lodge, and had our group dinner in the communal kitchen area – the trip included all breakfasts and dinners, cooked by the trip leader. 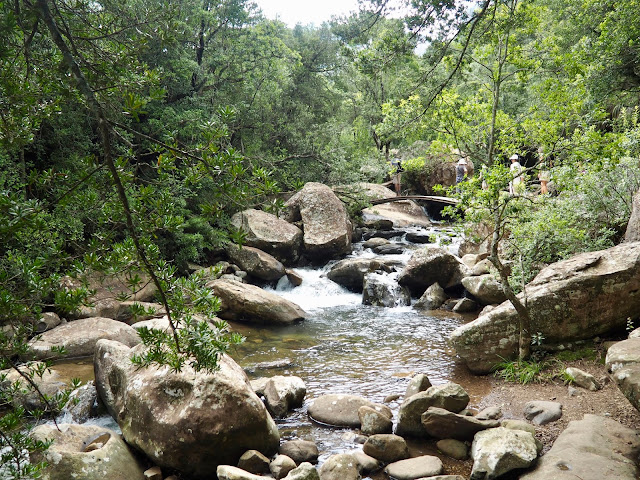 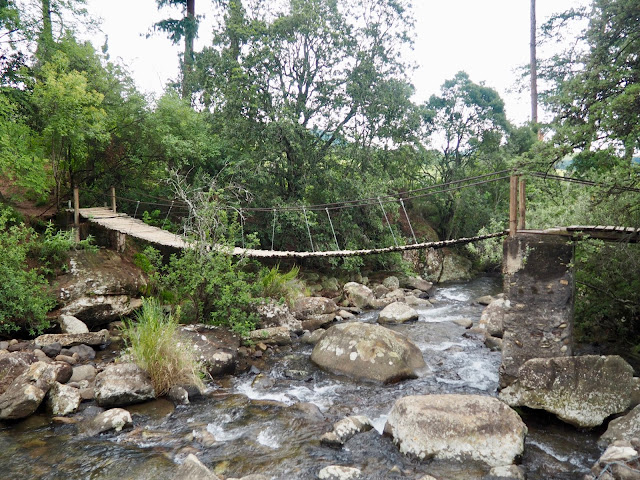 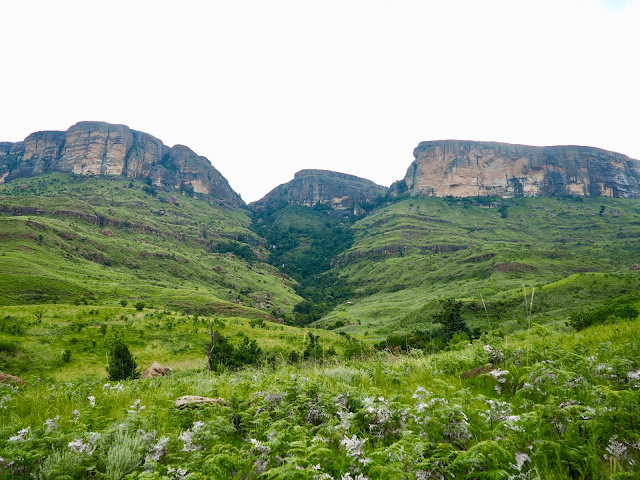 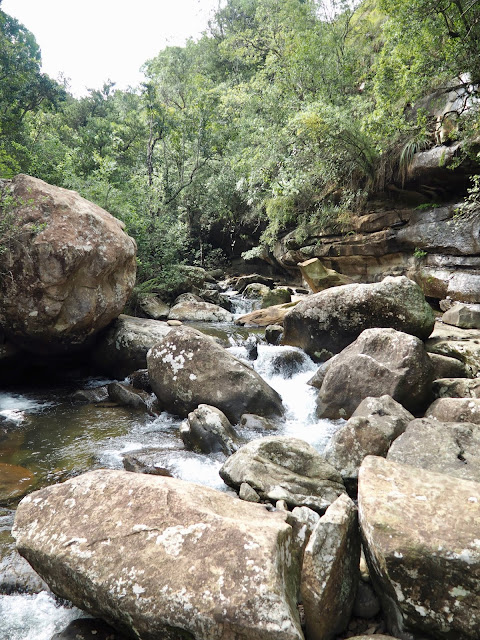 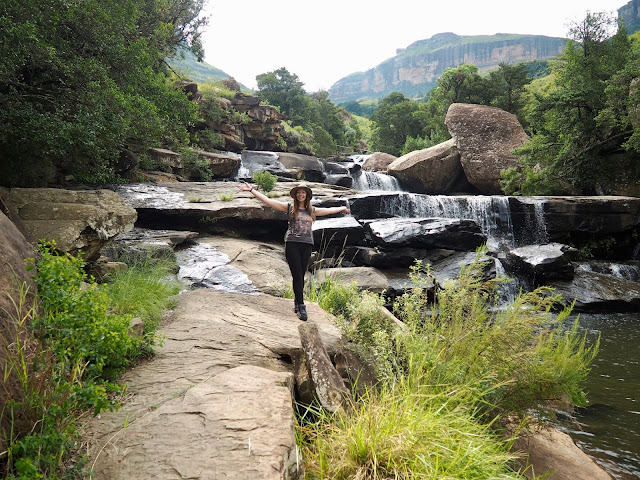 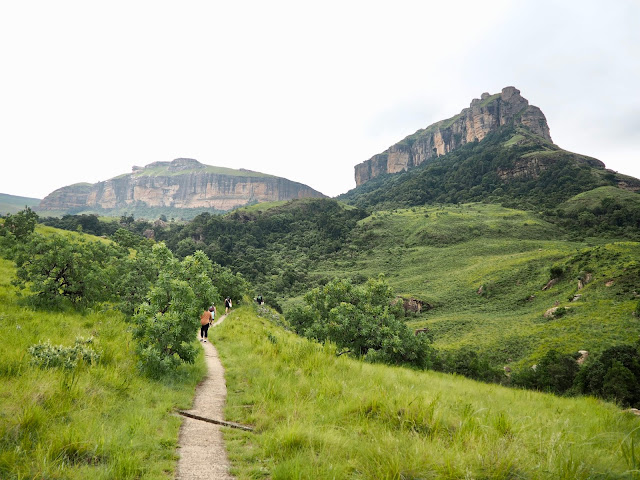 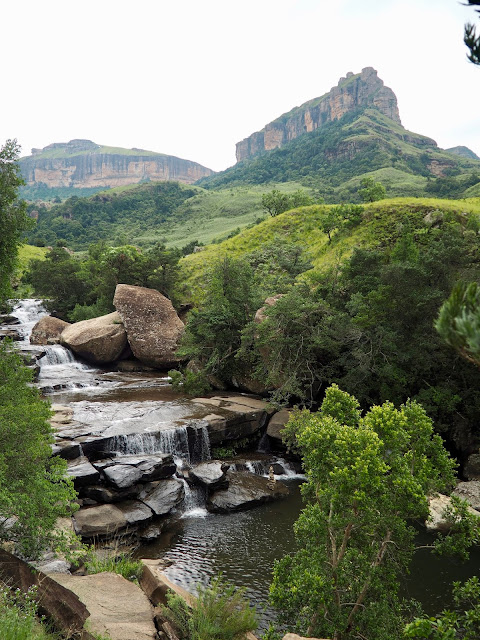 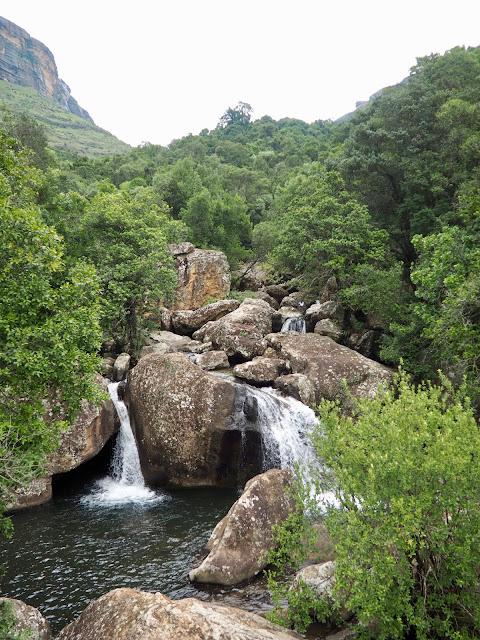 The next morning, we set off early again for our full day hiking experience in the Amphitheatre, the most iconic part of Drakensberg, a mountain range forming a half circle that resembles an ancient amphitheatre. We had to drive for a couple of hours to reach our start point first, a staggering 2500m above sea level, from which we would be taking the route to Sentinel Peak. We entered the national park again, and admired the beautiful green mountain scenery we were passing through. The last part of the drive was what we called an ‘African massage’, as the vehicle rumbled over bumpy, stony paths, and we all bounced out of our seats continuously! We had a local guide with us too, who was great – very friendly, enthusiastic and attentive, clearly an expert on the route, as he hikes it almost every day, and he had plenty of jokes to throw around!

The first portion of the hike was a zig zagging route up the hillside – we were ascending fairly quickly, but the path was mostly paved, and we took plenty of breaks to accommodate everyone’s fitness levels. The drop to the side was slightly alarming, being quite steep, but a lot of the time it was obscured by clouds. The weather up here is very changeable, so we got pockets of sunshine, revealing the sweeping mountain scenery around us, but for most of the time, we were walking through the clouds. After a while, the path levelled out a little, as we curved around the mountainside, instead of going up. This part was a lot rockier though, and we had to take care over some sections, though the guide was there to give us a hand (literally) over the trickier parts. The hardest part was yet to come though, as we soon reached the rock gully. This was a 250m rock scramble, going up almost vertically to the summit, and required all four limbs to traverse it. It was tough going, and took quite a while to get up, with lots of breaks along the way. Looking up was intimidating, as you couldn’t really see how much further you had to go; but looking back opened up to views of the amphitheatre, a breathtaking sight… at least until the thunderclouds came and hailstones started falling!

At the top, we were met with a ledge overlooking a sharp cliff face – needless to say, my fear of heights meant I stayed well back from the edge! I’m mostly ok to stand on mountains and such, as long as I feel like I’m on something solid and I’m not too close to an edge like that one! I was still able to take in the views though, hills and mountains stretching out to the horizon, and there was even snow visible on some of the distant peaks! We’d reached the highest point of the hike, Sentinel Peak, a whopping 3100m above sea level! However, our lunch break looking over the view was quickly interrupted by the arrival of a thunderstorm – and being so high up, put us at greater risk of lightning strikes! These were equal parts impressive and terrifying to see as they sparked their way down to earth. Our guide made us scatter over the cliff top, to reduce the risk, as we started walking over the plateau. Up here, they actually use it as farmland, with cattle, sheep and goats grazing the land, bells hung round their necks to help the shepherds find them again. The plateau is so wide, you could almost forget how high up we were once we moved away from the edge. 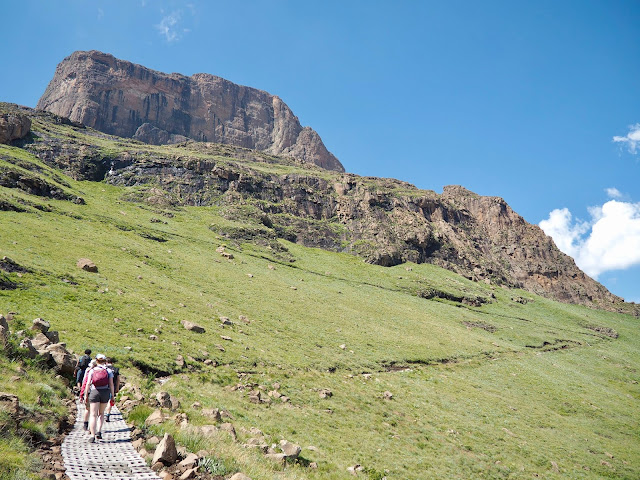 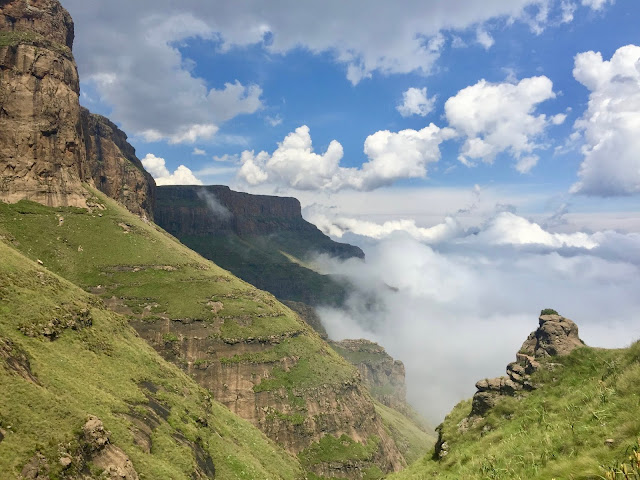 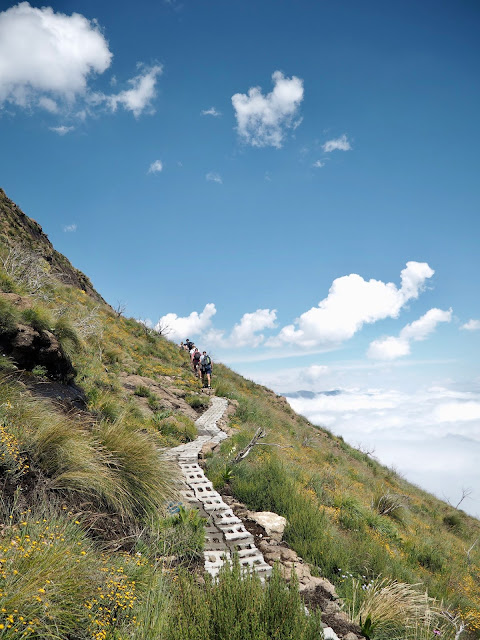 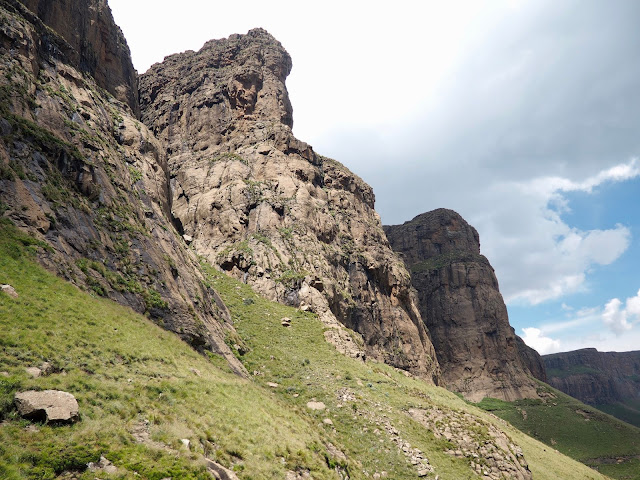 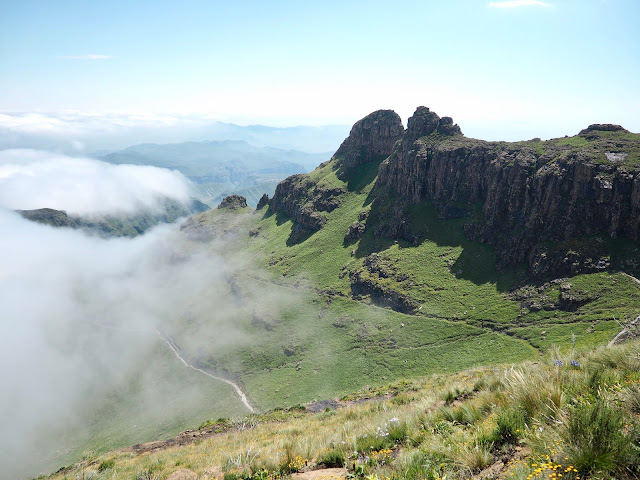 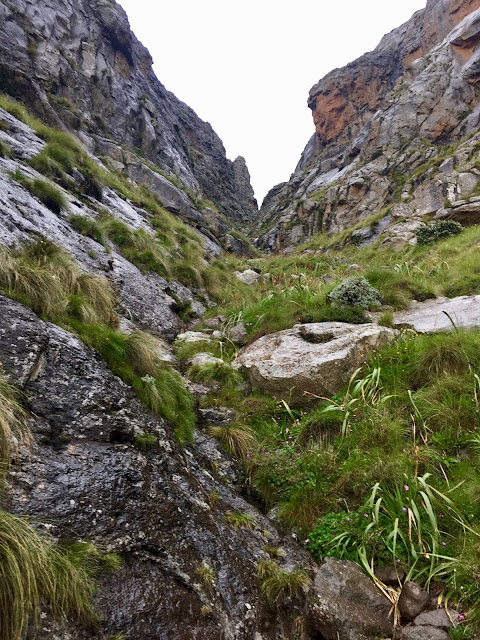 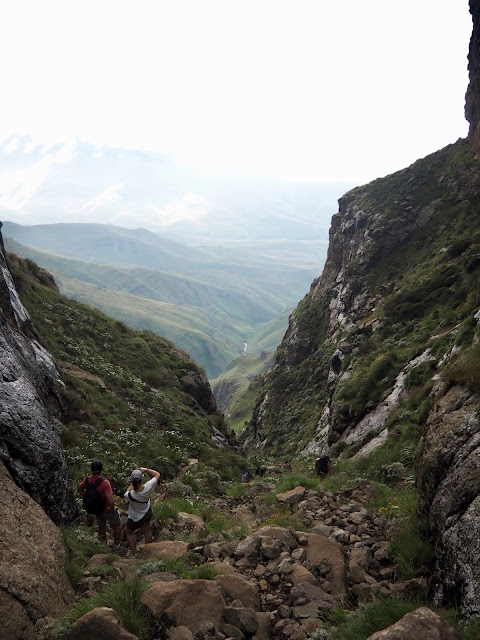 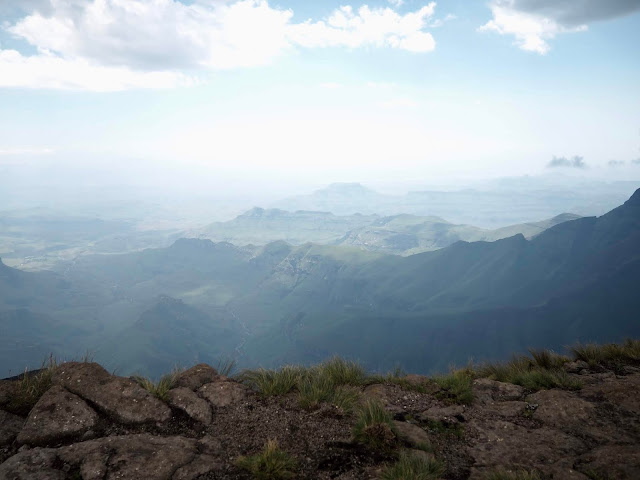 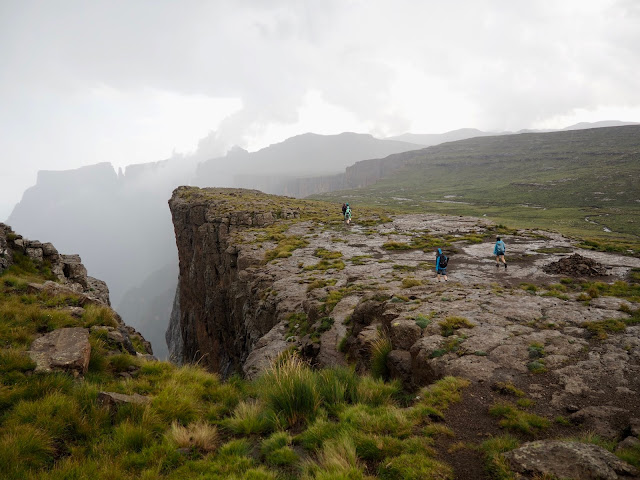 We slowly made our way back to the edge though, to see the waterfall that tumbles down almost 1000m over the cliff face. This is Tugela Falls, the second highest waterfall in the world, after Angel Falls in Venezuela. In better weather, we would have been able to swim in the pools at the top of it, but we were so cold and wet after the thunderstorm, that no one fancied stripping off. Instead, we marvelled at yet more scenery, snapping photos of it – though again, I stayed well back from the ledge! The next wave of rain was about to hit though, so once we were satisfied, we quickly made our way over to a shepherd’s hut nearby, to seek shelter for a while, along with another hiking group, and the shepherds themselves. They were dressed in simple woollen cloaks, and the hut was little more than a stone shell, but we were grateful to escape the cold wind and rain for a time.

After the storm finally abated, we crossed back to the other side of the plateau, over the level grassland. Little did we know, we were about to see the best view of the entire day! The storm had caused the cloud level to lift up above us at last, so when we reached the edge, we were rewarded with remarkable views looking out over the Amphitheatre itself. This was the same scenery we’d hike up past earlier, but without the clouds, we could fully appreciate the beauty of the scene before us. The mountains dramatically dropped away to the valley below, which itself was made up of rolling hills, encircled by the higher mountain range. There was the town and lake further out in the centre of it all, and the clouds bathed it all in a gentle light filtering through. To descend from this point, we had to take the chain ladders, which dangle down over the rock face. I was pretty terrified of this part, as it forced me to face that drop down. Fortunately the ladders aren’t too long, and you can make it down both of them in less than ten minutes. I was clinging on tight though, and moving only one limb at a time, and staring intently at my feet, too afraid to look down any further and see the drop below me!

I was glad I made it though, as I’d nearly skipped the whole day when I’d seen the photos of the ladders back at the lodge. I would have kicked myself for missing out on such a great hike, and such spectacular views though, for the sake of just a few minutes of white knuckle fear. From the ladders, we curved our way back around the mountainside again, to the bottom of the rock gully, where we linked up with the path we’d come up. Although it was the same route, it felt very different going down, now that the clouds had lifted and we could fully appreciate the views around us! Most us stopped to take photos at the same places we had on the way up, simply because it looked so different going down in the aftermath of the storm. I say aftermath… we did get another wave of rain on the way down, leaving us all freezing and soaking by the time we got back to the van! The drive back to the lodge was less fun, as we were all shivering and a little smelly from being so damp, and we all quickly hit the showers when we returned. 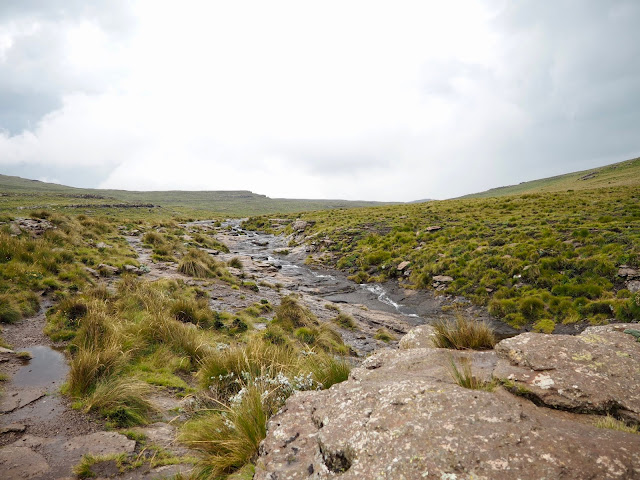 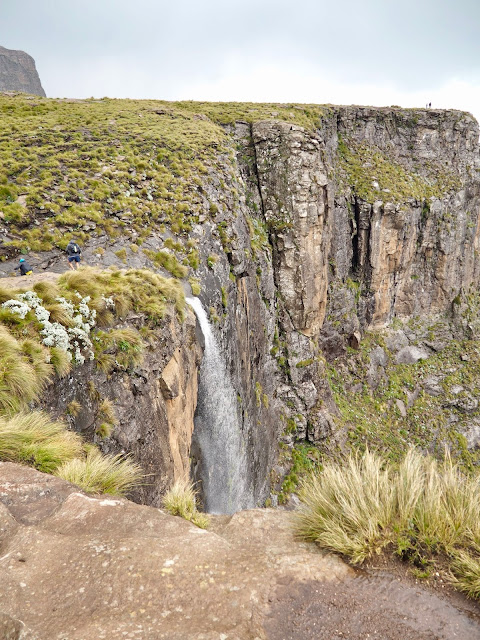 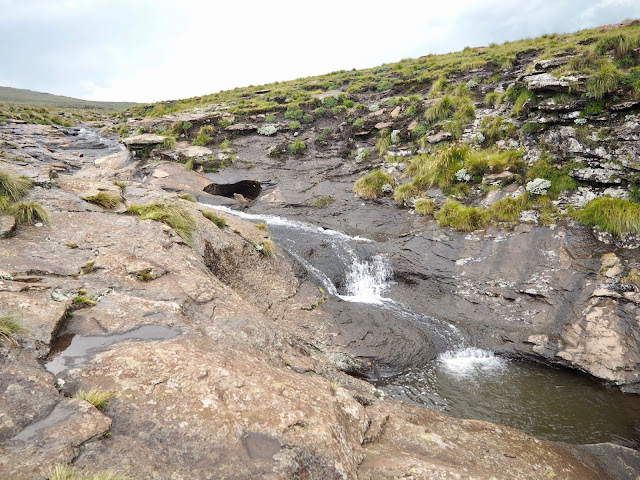 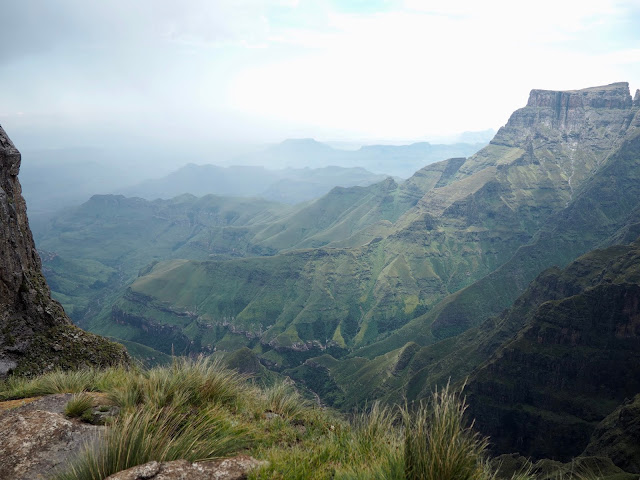 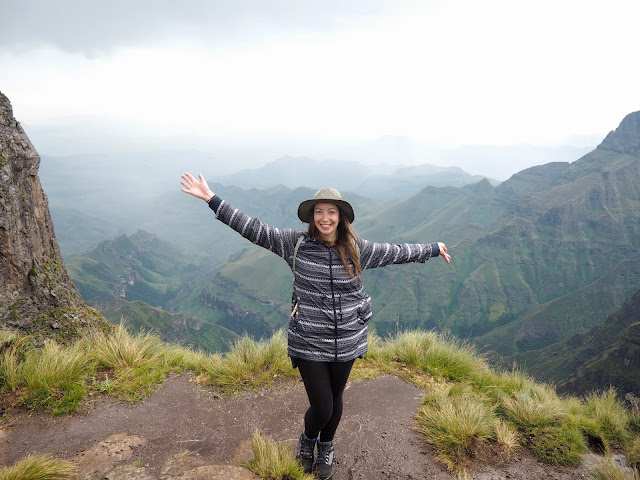 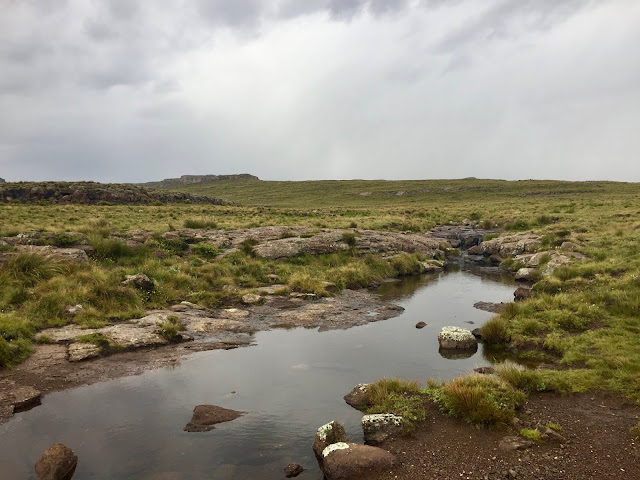 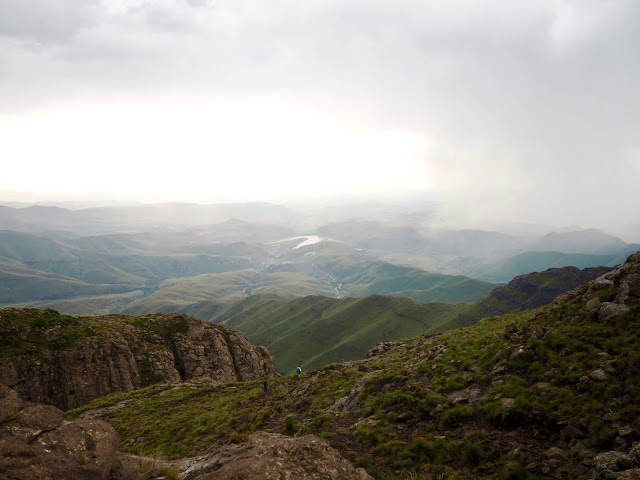 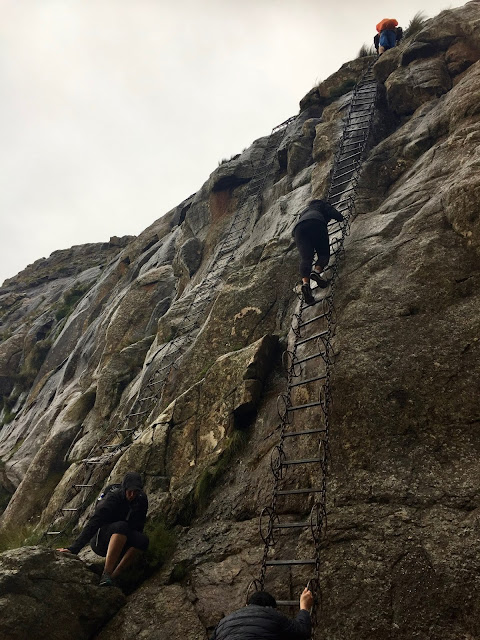 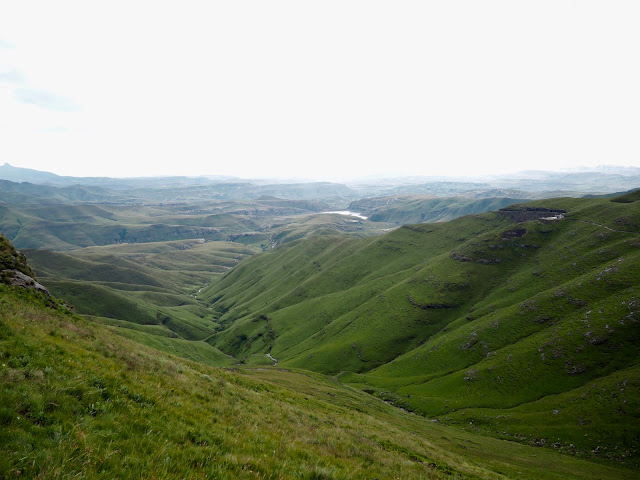 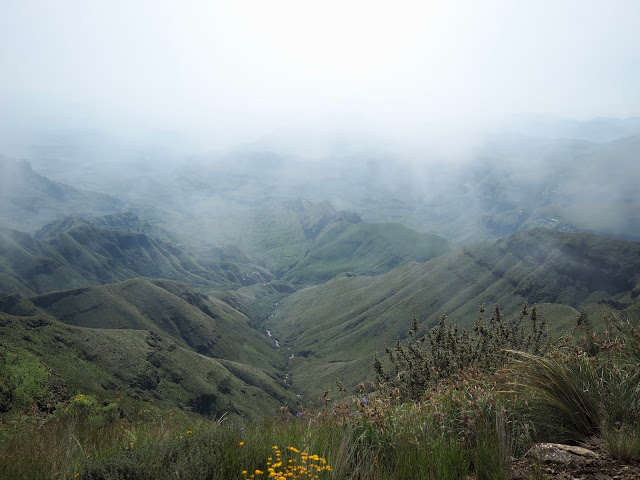 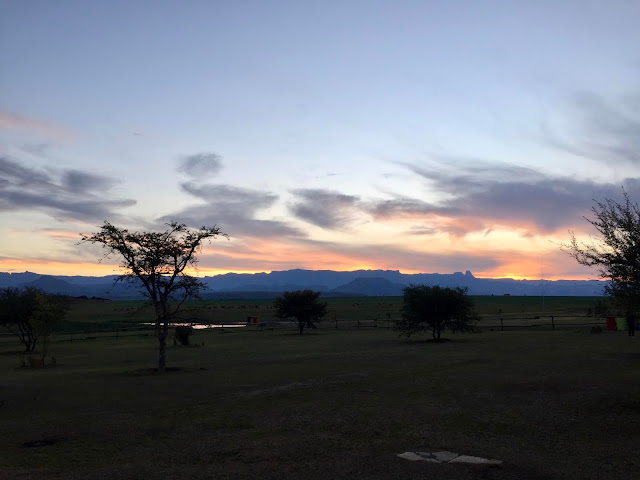 The evening was spent having dinner and drinking at the bar, taking in a gorgeous sunset as well. I had been looking forward to hiking on this trip, but never expected such scenery as we got in Drakensberg. Despite the weather conditions – although they sort of added to the whole experience and the story! – it was a fantastic day out, in a beautiful location. The hike is certainly not easy, but is also not impossible, so most people with intermediate fitness could handle it I think. While I was looking forward to the coastal portion of the trip later on, I was so glad that this was included in the inland portion, and would absolutely recommend it to any other hikers!