Two years ago, we were gifted with ‘The Force Awakens‘, Episode VII in the Star Wars franchise, and the start of a new sequel trilogy. Now, here we are at Episode VIII, the second instalment of the new trilogy, entitled ‘The Last Jedi’. How does it fare alongside its predecessor, and the existing franchise thus far? Some mild spoilers ahead, but no explicit reveals! 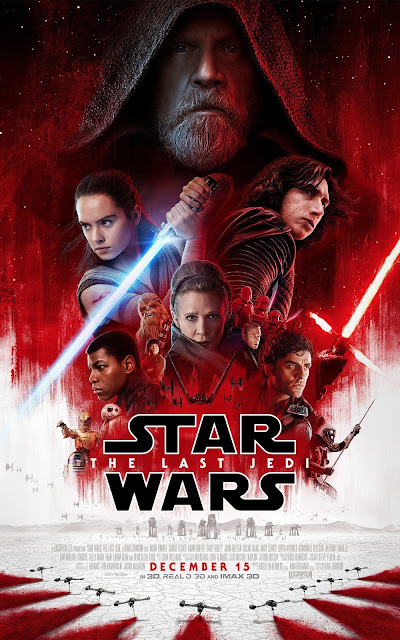 ‘The Force Awakens’ brought us a whole host of new characters to the franchise, who were all back for the next round, and continue to cement themselves as fan favourites. Rey is still our strong female lead, establishing herself as a powerful user of the Force, something we’ve rarely seen in a female character before – except when Leia occasionally uses it. The relationship between Rey and Kylo Ren (or Ben Solo) was a particularly fascinating part of this film; it was astonishing how quickly I could switch between hating Kylo, and rooting for him, so Adam Driver definitely needs to be applauded for that performance! He and Rey are almost two sides of the same coin, each facing their own sort of conflict. It’s easy to peg Rey as the hero and Kylo as the villain, but the reality is far more complicated than that, as we watch Kylo destroy his Vader-like helmet, pulling away from his dark grandfather, and Rey plunge headfirst (literally) into a dark temptation. The previous films have always talked of the need for balance in the Force, and that duality of good and evil, light and dark, is explored even further in this film, as Rey and Kylo are faced with both options, and it’s not always clear which side each of them is veering towards. More than just this struggle though, there is also this electric chemistry between them, creating the possibility of dangerous, intense romantic storyline, one which we can’t help but ‘ship’, even when we know we shouldn’t – yet the film manages to avoid portraying a toxic relationship, but making sure that Rey holds on to her agency and power, and making sure she keeps her priorities in order. Saving the galaxy is a far bigger concern for her, as it well should be.

The re-introduction of Luke Skywalker to the franchise is also a large part of this storyline, as his struggle with balancing the Force is a major component in the development of Rey and Kylo. Luke is initially reluctant to get involved again in the Resistance, as he’s been hurt and jaded in recent years, and leaves viewers feeling puzzled and hurt at first, by our hero’s change in attitude; but ultimately, he gets the big hero moment again. This could be frustrating, when it’s characters like Rey, Leia, and Rose (more on her in a second) who are constantly telling the men what the right things to do is, but overall, it’s nice to see our original hero and protagonist have his moment again. And I’m quite certain Rey will get her moment in the final film of this trilogy! It’s always nice to see familiar faces returning too, and I’m glad that characters like him are still a major part of the story, not just cameos. There was also a lovely callback to a scene from one of the original films, played out between Luke and R2-D2, which I’m sure many fans will enjoy.

There’s a couple of storylines that play out throughout the film, and while Rey is learning about the Force from Luke, and she and Kylo are exploring their dual natures, the rest of the Resistance has their own battles to fight, and this brings about some nice character development for many of them. Finn is as loveable as ever, and continues to demonstrate his morality and bravery. He finds a new friend in Rose, a girl whose life has mostly been lived in the background up until now, but she steps up the plate admirably. She’s a great addition to the cast, and I very quickly became a big fan of hers – especially through her sense of right and wrong, as she teaches Finn more about the universe. Poe is dashing and reckless as ever, performing some astonishing stunts in the opening sequence, and continues to be a fan-favourite. There’s some nice development for him too though, especially through the way he clashes with Admiral Holdo, as he starts to learn not to rush into things, and to see the bigger picture and alternative plans – even if ‘jumping in an X-Wing and blowing something up’ is still one of his preferred options! It’s an interesting exploration of gender politics, as his cockiness clashes with Holdo’s stoicism, and he is forced to learn that others – especially his female superior officers – may know better than he does. I also really loved the little moments between him and BB-8, who is still the cutest droid ever, and his relationship with Leia is really nice to watch, as they clearly care about each other, even when they argue about strategies. The General is as formidable as ever, yet again proving her resilience and determination in the face of evil, especially when that evil takes the form of her own son. Her performance is all the more poignant when it was Carrie Fisher’s last, especially the scenes alongside her daughter, Billie Lourd, whose character returns, still sporting that same iconic ‘cinnamon buns’ hairstyle. I’m sure I’m not the only one who was moved by the film’s closing dedication; “In Loving Memory of Our Princess, Carrie Fisher”.

I thought ‘The Last Jedi’ felt a little different to some of the previous films, as there was a lot of psychological, emotional, and thematic exploration going on, especially with the idea of balance between light and dark, and maybe less battle sequences (not that I keep count). I did appreciate that some of the battles felt different, like the salt plain scene, so it’s not all fighter ships and lightsabers. The battles are crucial for exploring another of the film’s themes though, about war and its casualties, as we see so many innocents lose their lives in battle, in service of the cause they believe in, so every victory is bittersweet. It is a long film; there were a couple of moments where I thought it was getting close to the end, only for another scene to unfold. It’s definitely a second film though, picking up almost immediately where the first left off, and leaving us with plenty loose ends to be resolved. A few questions and histories from the first film were explained, but often quite quickly, without excessive explanation, and with limited flashbacks, so it’s a film firmly taking place in the present moment. At first I was a little disappointed, as there are backstories I wanted to know more about, but I was also glad to not dwell too much in flashback and lose track of the current conflict. My only qualm was the lack of explanation of Snoke; in the previous film, he was this mysterious figure pulling the strings, and this time I felt he was less sinister, and there was no explanation of who he is, how he came to be in his position, and how he met Kylo Ren, all of which I’m still very curious about!

Finally, although the film is largely very dramatic and emotional – honestly, it ripped my heart out, or came close, on so many occasions, so brace yourselves – there are moments of humour and joy to be found. Aside from the themes of balance and war, hope is the other overarching theme, as we watch many of her characters face bleak uncertainty, stripping them of their hope at times. However, they hold on to it somehow, reminding us that even the smallest spark can ignite the flame. There are witty one-liners scattered throughout, and some of my favourite moments are Chewie interacting with the Porgs, who are utterly adorable! The film is once again soundtracked by the inimitable John Williams, who has created a powerful, moving score, of course using that iconic theme tune again. And much of the editing and transitions resembles that of the original films, keeping in with the aesthetic we’ve all come to associate with the franchise.

So, overall, I thoroughly enjoyed the film. I love explorations of theme and psychology and the like, so Rey and Kylo Ren’s storyline was the most fascinating for me. I liked seeing the development in other characters too, and the new characters were wonderful additions to the film. There are moments when I laughed, and moments when I was close to tears. Some of my earlier questions were answered, but there’s still a lot to be unpacked, explored, and resolved in the final film of this trilogy, which is exactly what a good mid-trilogy film should do – it left me satisfied, yet eager for more. And it’s clearly a 21st century film, with important explorations on the casualties of war, on gender politics, and on female power and agency, serving up strong characters and relevant storylines. Now, do I really have to wait 2 more years for the next one?