Yet another superhero movie. The Marvel universe has been expanding for years, and now other film companies are jumping in on this success and launching more superhero films of their own. I love a good superhero movie, but I’m worried we may all get sick of them in the coming years. So what makes Ant Man 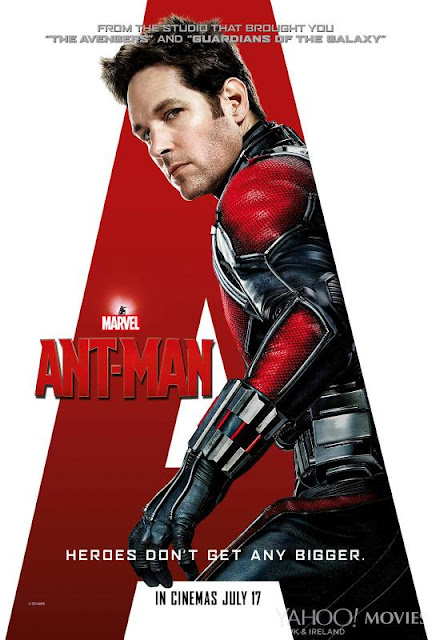 For starters, I love that Marvel has backtracked a little with this one, and given us a film about one superhero, with an origin story, that can stand alone. I enjoyed Avengers: Age of Ultron, but it did feel a little over-populated with characters, and I have the same concerns about the upcoming Captain America: Civil War, whose cast list looks like it might as well be Avengers 3. But Ant-Man goes back to basics, cutting down to a regular sized cast. There are references to the wider Marvel universe, of course, and I especially love it when we get to see Peggy Carter! I also enjoyed the other big cameo scene (without giving much away) – it could feel a little forced to some, but does serve as a lead-in for Ant-Man crossing paths with the Avengers in the future. I’m glad this was a stand-alone origin though, because it allows us to get to know the character of Scott Lang, establishing himself clearly before he gets swamped in amongst other characters – I felt some of the new characters in recent films didn’t get much introduction or backstory, but we did this time around. It felt like one of the earlier Marvel films in this respect, and I still got excited about the little nods to other films (including a tiny, potential Spider-Man reference), since they didn’t overwhelm this story.

As a film on its own, this story works very well – you don’t need to have seen the other Marvel films to understand this one. As a protagonist, Scott Lang is very funny and relatable, and everyman down on his luck, but with a degree of intelligence required to allow him to become a hero. His is a redemption story, proving that a criminal background doesn’t mean you’re the bad guy, and he possesses heroic values, without being excessively noble, or having any god-like powers. And honestly, who doesn’t love Paul Rudd? I liked Hank Pym as the older mentor type, which we haven’t seen too much of before, and his strained relationship with SHIELD and Stark proves that the world isn’t black and white, instead exploring the moral greys, and perhaps hints at what’s to come in Civil War. Hope was strong and fiery, and a bit of a bad-ass, and Cassie was simply adorable, but neither was a strong enough female presence in the film for my liking – much as I enjoy Marvel films, the feminist in me gets pretty frustrated at times! The villain, Darren Cross, was also lacking a little – he was unpleasant, yes, but ultimately didn’t seem like that much of a threat in the grand scheme of things, and was nowhere near as scary as others we’ve seen – to be expected I suppose, after the alien powers seen in Guardians, or the game-changing disintegration of a government organisation in The Winter Soldier (still my favourite Marvel film so far).

The other thing I really enjoyed about this film, was for much of it, it didn’t follow a traditional superhero movie formula – large chunks felt like a heist film, which makes sense given Scott’s criminal background. It’s important to have things like this, to make a superhero film more unique, when there are so many out there these days. I love seeing all the important details and planning that goes into their mission, rather than just fight scene after fight scene. And while it’s not the game-changer that The Winter Soldier was (still my favourite Marvel film), with the disintegration of a government organisation, we still continue to explore the grey areas, as Scott commits a crime to save the day, and Hydra’s presence continues to be felt. The special effects were as good as ever – admittedly, the ants freaked me a out a lot at first, but grew on me over time (except the big one, no thanks!), though I still wouldn’t want to spend as much time with them as Scott does!

Overall, it’s an enjoyable summer superhero film. The change of pace after the most recent Avengers film is certainly refreshing, and while the supporting cast may get lost in future films, Scott Lang will definitely be able to hold his own in amongst the other Marvel heroes. It’s not a ground-breaking or game-changing film by any means – it makes efforts to be unique within the Marvel franchise, but at the end of the day, it’s a superhero movie, with a fairly predictable resolution. It’s not my favourite film in the franchise, but it’s far from my least favourite either; it’s funny, smart, with plenty of action, and a nice return to a simpler stand-alone story. Stay tuned for the end credits scene though – oooh I got excited about that one!