A Day in the Life | Juggling Jobs

So if you read my recent ‘Life Update‘ post, where I filled everyone in on what I’ve been doing since I moved back to the UK, then you may know that I’ve been juggling a couple of different jobs recently. Basically, none of them could guarantee a full 40 hour working week, and all are hourly salaries, so I need more than one to sustain myself at the moment. In some ways it’s interesting, because no two days are the same for me right now; however, it can also get a bit complicated and frustrating trying to coordinate shifts between the two of them. I can’t give one hard-and-fast day in the life, since my shift patterns are constantly changing, but I’m going to give you a couple of examples of different working days for me – these are both busier, double shift days, whereas other times I might be off all day and only work 5-8 hours at night in one shift. Also, days off are kind of at my own discretion now; sometimes my shifts land so I get one off anyway, other times I have to decide myself to not take shifts that day and give myself time off, and other times I end up working like 10 days in a row without anything off! 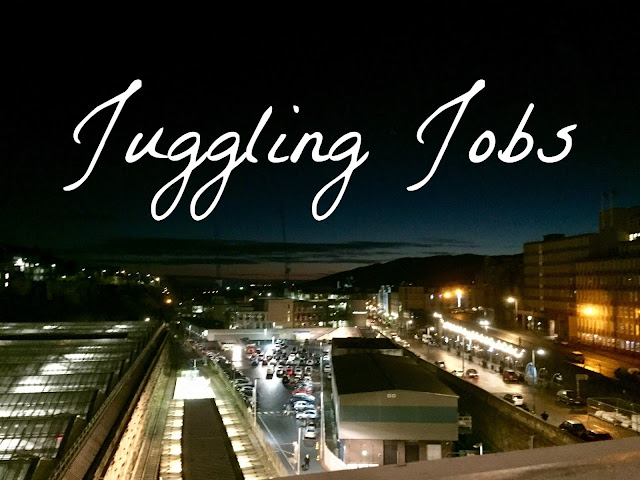 9.00am – Wake up. Thank goodness I no longer have breakfast shifts since leaving the hotel job! I’m staying with a family friend until I move into a new flat next month, so there’s usually at least 30-40 minutes travel time I need to allow.
11.00am – Waiting shift (agency job). Recent day shifts have mostly been Christmas lunches, in venues such as the EICC or Edinburgh Castle. This tends to start with me showing up at the venue and spending ten minutes trying to figure out how to get in, and where I sign in! This is generally around a 6 hour shift, often with no break (unpaid if I do get one), and spent running around on my feet, trying to figure out where the hell anything is. Upsides to this job is working in different venues so it’s always interesting, and especially when I get to work alongside other agency staff I know; downsides are not knowing where anything is in each new venue, and having to deal with managers and the venue’s own staff who don’t tell you a damn thing. Oh, and annoying customers, but that’s true of all hospitality jobs.
5.00pm – Finish waiting shift. Look at my phone to see a million emails from both jobs about availability; shifts cancelled, people asking for cover for theirs, or replies to me asking to change or cancel shifts. I probably spend at least half an hour each day looking at my various shift apps and calendar, trying to keep track of everything.
6.00pm – Get home – eat some food, change (no uniform required for the tour company, yay!) and freshen up. Scroll through what I’ve missed on the internet. Accept that I will see spoilers, as I’m at least 2 weeks behind on the TV I normally watch. Maybe write half a blog post, though that’s rare.
8.00pm – Pub crawl shift. This is definitely one of my favourite shifts to work. I do have various responsibilities, mainly leading the group from place to place, ordering their free drinks, and taking photos and noting email addresses to send them the following day. A large part of the job though, is to socialise with the group – something that sounds absurd, given how shy I used to be, but which I actually do fairly easily these days! It’s certainly more fun, and less exhausting than hospitality shifts, though I do finish quite late at night…
00.30am – Finish pub crawl, and make my way home. If I finish the crawl sharp, I can catch a bus and be back just after 1am… if I’m running late on it, or I choose to stay with the group in the last club a little longer, then I miss that bus and have to wait another hour, or pay more for a taxi or Uber. The other night, my phone died so no Uber, and the taxi queues were stupidly long, with few taxis showing up, and the bus was 45 minutes away… I ended up getting McDonald’s, then waiting for the bus, getting home after 2am. This will be much easier once I move next month!

8.00am – Wake up. Different shift patterns means all kinds of start times! Some days I can sleep till noon, if I’m only doing an afternoon or evening shift at either job. It’s rare I’ll be up earlier than 8am, unless I have a morning waitressing shift.

10.15am – Meeting Point Coordinator shift. This is my other role within the tour company, staying at the meeting point for the tours to give information to customers, hand out tickets, divide up groups between guides, and taking photos of them. I like both my roles within this company, and I think this one plays to my strengths in organisation and management, as I’m good at keeping on top of everything. The downside is having to stand out in the cold at this time of year! Between tours, I also do promotion on the street or taking flyers to hotels, but my favourite is when I get to write blog posts for the company’s website, which is usually during my evening meeting point shifts!

1.15pm – Finish shift, and actually have some free time to myself! Lately, this time has been used for Christmas shopping or flat viewings, though both of those will be over with shortly. If my evening shift has an earlier start, I’ll sometimes just go to a cafe and try to do some blogging, and grab a quick bite to eat. If I have longer, I’ll go home again in between, to change and hopefully relax a bit. I’ll have to change into uniform if my evening shift is with the agency, and I’ll also probably have to do some scheduling and emailing about my upcoming shifts in this time too!

6.00pm – Bartending shift. This could also be a waiting shift, depending on the event, but recently I’ve had a couple of bar shifts at large Christmas party events. I’d only done a little bit of bar training before starting this job, so it was daunting at first, but also a good way to practice bartending – fortunately, I don’t need to know cocktails or anything too fancy at these shifts! Lots of shots and jagerbombs though! These can be very intense shifts, as the functions are generally for several hundred (even over a thousand) people, who are naturally out to get drunk at a party night! I’ll get a break and food somewhere in the middle, but it’s more or less non-stop serving drinks. The last hour or so is clean up and bar breakdown, after the event finishes and the guests leave – definitely my least favourite part, as it’s so messy and I’m exhausted by then, but it’s a necessary evil.

2.00am – Finish shift, taxi home. Most venues provide taxis after midnight for staff, or at least give a contribution towards them – annoyingly, I can rarely split mine with anyone because of where I’m staying for the moment, so I often lose my last hour’s wages on the taxi fare, as the contribution doesn’t cover that much, if it isn’t fully paid for by the venue. I immediately crash into bed when I get back, especially if I have a morning shift the next day – you can see why I couldn’t keep doing the breakfast shifts, when I had to wake up at 5.30am!

If you compare these days with my previous ‘day in the life‘, when I was unemployed and job hunting, you can see that I’m much busier these days. I like the variety in my work, as no two days are the same, and I much prefer being out and about, actively doing things, meeting people, and going to different places, instead of being stuck in an office all day. You’ll also notice that I have less free time, and hobbies like piano (not that I have access to one presently) and yoga have fallen by the wayside. I’m hoping to get back to some things in the New Year though, when the agency work will be less busy after the festive period, and I’ll be living more centrally and not need to spend as much time travelling to and from work – I can hopefully pop home and do yoga between shifts or something! It’s also harder to maintain a social life, as my couple of friends in Edinburgh work regular day jobs, while I’m more often working evenings and weekends, and coordinating shifts can get frustrating. I need to work enough hours though, to sustain myself, so I’m making this work just now. I don’t want to work in this way forever, but it keeps me busy and not bored for now!