Oh I do love a public holiday! Last week it was Ching Ming festival, a traditional day of tomb cleaning for the Chinese, which meant a day off work for all of us! The good weather from the weekend had stuck around, so we decided to head back towards Sai Kung Peninsula (after having spent all of Sunday hiking there). We opted for a different activity though, instead of hiking, so we were off to rent kayaks for the day instead. 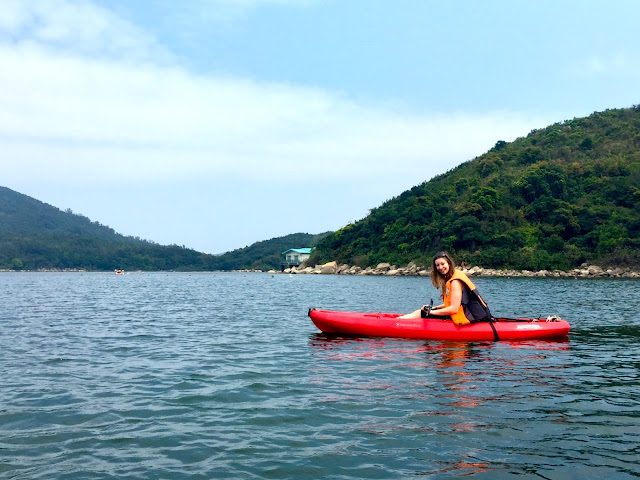 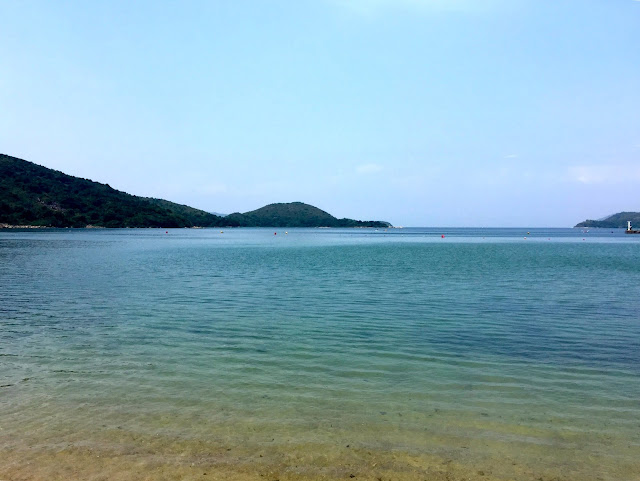 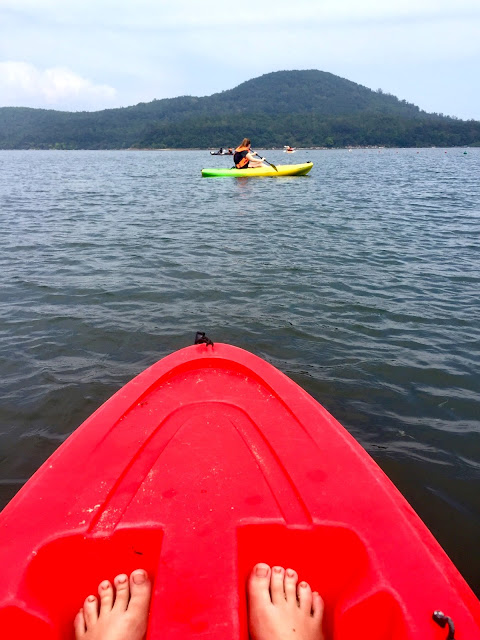 My friend was in charge of organising this time, since I had researched Sunday’s hike, so on someone’s recommendation we were going to the village of Hoi Ha for our kayaking adventure. We jumped on the 7 minibus in Sai Kung, which took maybe half an hour to get us to the north side of the peninsula. Hoi Ha is a tiny village, just a handful of houses, and there seems to only be one place that rents kayaks there, a little restaurant that you pass by on the way to the beach, impossible to miss really. We had paused to read their advertising sign, when the elderly couple running the place immediately began asking if we were interested in kayaking. They spoke very good English (surprising for their generation in this are of Hong Kong, if I’m being entirely honest), and we paid our $100 each for a kayak, plus another $30 each to rent lockers, as there would be nowhere to keep our stuff dry in the kayaks – I only managed to take these photos with my phone by being super careful and stashing it in a plastic bag, then inside the zipped pocket on my kayak’s seat! They gave us paddles and life vests, then we were taken down to the beach where the kayaks were stored. There was no time limit imposed, though the woman suggested we come back around 4.30-5.00pm since we had to journey home again. 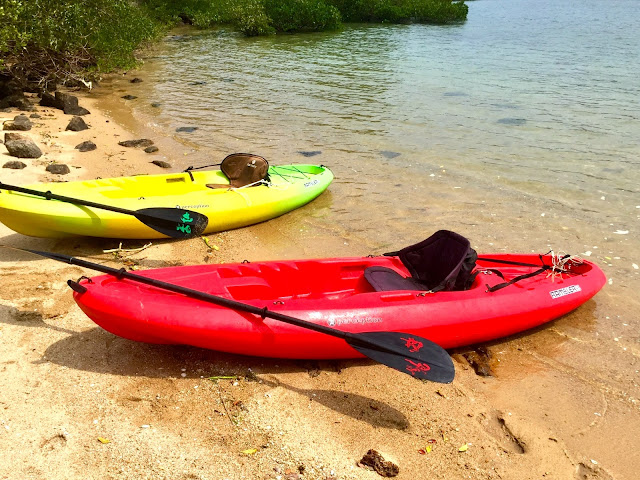 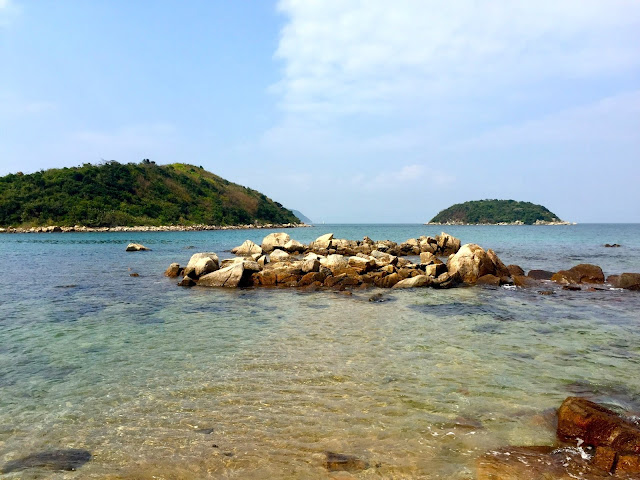 The beach was small and quiet, part of a large circular bay, on which we could see a handful of other kayakers already. I haven’t done much kayaking before (the last time was in the Philippines I think), and since I do a lot of walking, most of my strength is in my legs – my upper body strength is terrible, so it didn’t take long for my arms to start aching! The currents and the size of the bay were frustrating me too, as I felt like I wasn’t getting very far very fast, and kept getting pushed off course by the currents, so it took me a little while to get into the swing of the whole thing. I got there eventually though, and quite enjoyed it in the end – though my shoulders didn’t thank me the next day!

We paddled across the bay, slowly making our way over to a patch of sand we could see on the far side. It took a while, with the currents trying to pull us in the other direction, but we made it to shore eventually. There wasn’t much there, other than a boat of people setting up for a picnic, and it was a tiny stretch of sand. We took a rest, and I pulled off my leggings, which were already drenched, and I didn’t have a change with me – I was wearing a bikini underneath, but my legs did get a little red by the end of the day because of this decision! We hopped back into the kayaks pretty quickly, and set off back into the middle of the bay. Initially we were heading towards the right side of the bay, where we could see more sand, but as we got closer we realised it was similar to what we’d just left. Instead, we spent a while just drifting on the water, resting our arms and soaking in the sun. It’s a very peaceful place to be, in the middle of the bay like that, with hardly any noise or any other people around. 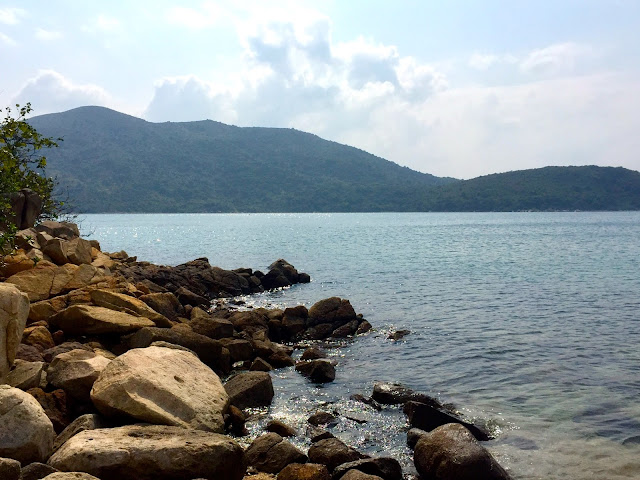 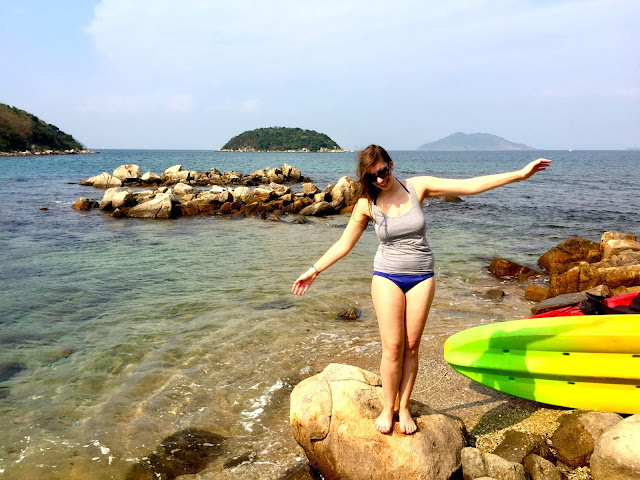 We then chose to head towards some tiny islands on the edge of the bay, near where the peninsula jutted out, separating this particular bay from the next. We paddled around, and eventually pulled ourselves ashore on the far side of one of them. I checked Google Maps later, but it doesn’t have a name, being a deserted patch of land, composed of foliage and rocks. There was no sand or beach, so we hauled the kayaks up amongst some rocks to secure them, then sat on the rocks ourselves. Not the comfiest spot perhaps, but we had a stunning view of the clear turquoise waters and another remote island ahead of us, a sight only a few other kayakers have seen I suspect. We also spent a while fooling around taking photos on the rocks – some came out better than others of course! The sun was starting to get low after a while, so we began our journey back to the shore.

I’d hadn’t quite realised how far we’d come, and was fairly impressed with my own stamina actually! It took a while to get all the way back, but we weren’t in too much of a rush, so we were fairly leisurely about it and took a few brief rests along the way. We considered stopping at the beach next to where we’d picked up the kayaks, but since we had a long journey back to Kowloon ahead of us, we just went straight back to where we started. This proved to be the right choice, as once we returned the kayaks, dried off and changed, then made our way up to the bus stop, we were met by a very long queue of people, and the news (via our phones) that traffic around Sai Kung was extremely jammed up – which shouldn’t have been surprising on a public holiday of course! We had to wait for the fourth bus to come along, which was probably at least 45 minutes later, and then we got held up in traffic both on the way back to Sai Kung, and from there on our way back to the MTR, on the 92 bus. From Hoi Ha all the way home took almost 2.5 hours that day! 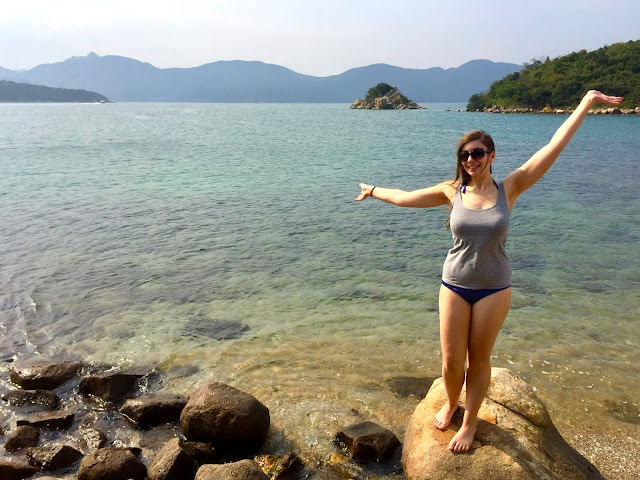 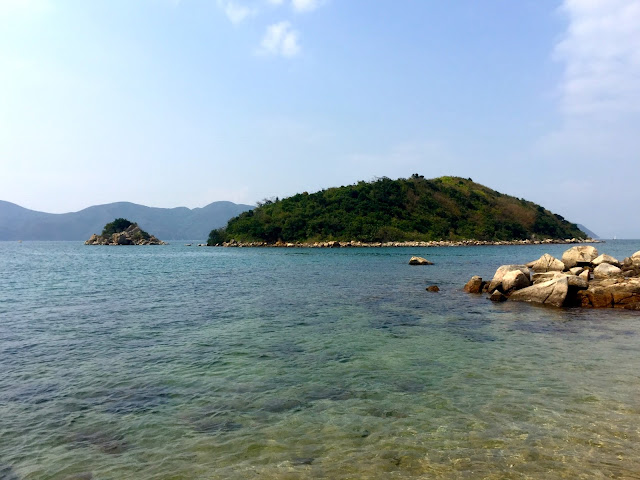 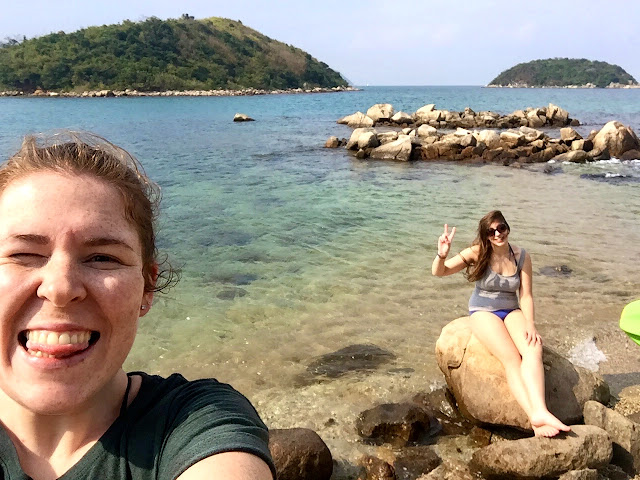 It was a hectic return trip, but overall it was a good day out. I’m glad I tried something a little different – yes I’ve kayaked before, but it’s not an activity I’d think or choose to do very often, but I ended up quite enjoying it. The currents and my lack of arm strength did make it frustrating at times, but it was also so peaceful out on the bay, and a lot of fun discovering hidden corners, like on that tiny island, which are otherwise inaccessible. I doubt kayaking will become a regular hobby of mine, but I’m definitely not opposed to doing it again, and Sai Kung is such a beautiful location for any outdoor activities. How long until the next holiday now?