We seem to be getting a last wave of summer for the year this week! And I had days off, so I headed out to the Pentland Hills, for a quick hike to make the most of it. To be honest, it was a bit overcast and cloudy for the first half of this, but it brightened up later on. I chose Turnhouse Hill, a route I hadn’t taken before, but not too long or strenuous, as I wasn’t planning on going out for the entire day. 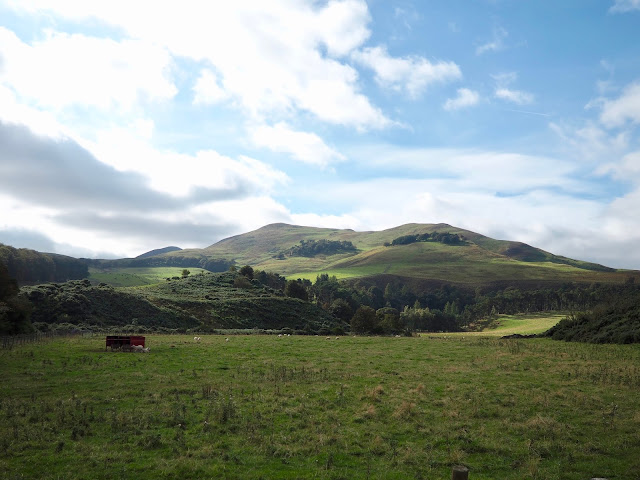 The route starts by Flotterstone Inn, which can be reached from Edinburgh on the 101 Stagecoach bus. The bus only runs every hour or so, meaning I was conscious of my timings for the day, as if I missed one bus back into the city, I’d have a long wait for the next. Which means I did do this hike in fairly quick time, but you could spend longer on it, if you wanted. Anyways, from Flotterstone, I followed the path further into the park – there are route maps available next to the information centre at the car park! The paths are pretty well signed though, and I took a fork to the left, following the ones for Scald’s Law. This is the highest peak in the area, and not my final destination for the day, but Turnhouse Hill is on the way there.

The path soon started to climb upwards, and I could see the peak of the hill in front of me. That initial scramble up is probably the steepest part of the whole thing, more or less straight up. It was tough, and I stopped a few times to catch my breath on the way, but it’s not a very long climb. The hill sort of has two plateaus, before the final peak. After the initial climb, I passed under some trees, blown sideways by years of wind, and then followed a more level path. To the right, there’s a dip that reveals a view of Glencorse Reservoir down below, which I would end up circling around later on. 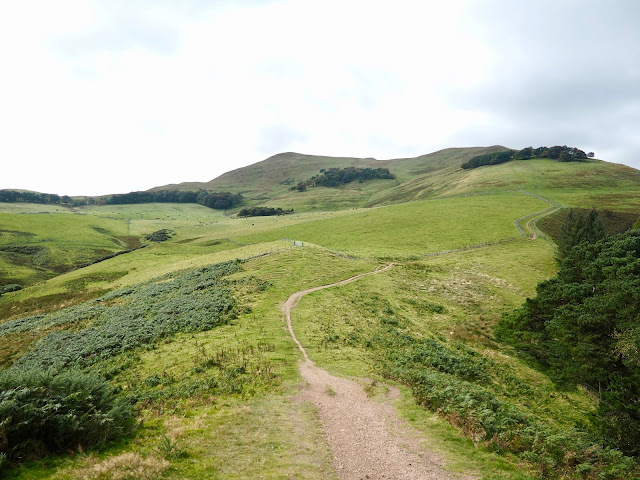 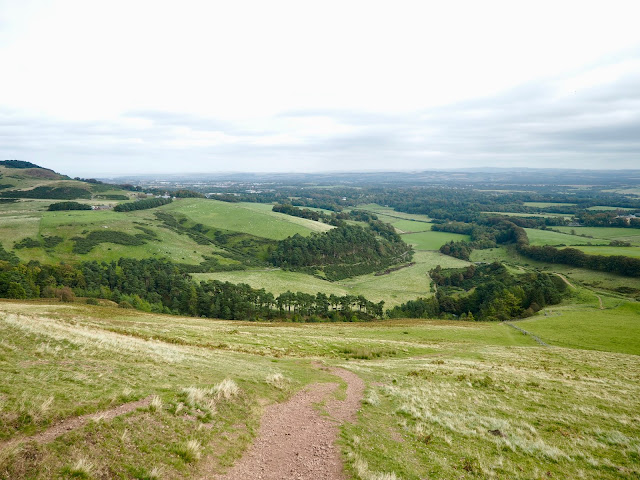 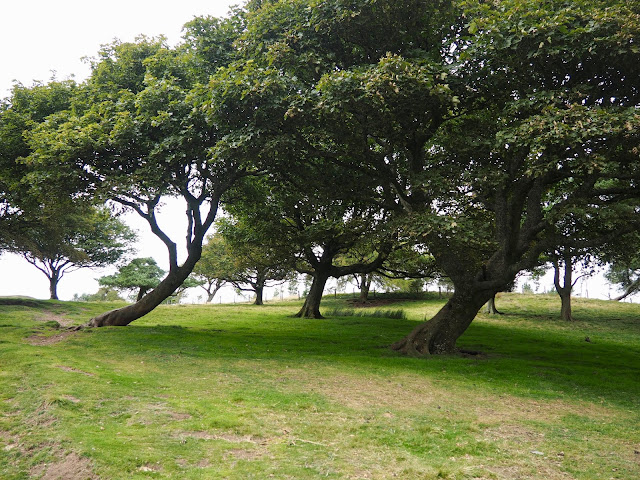 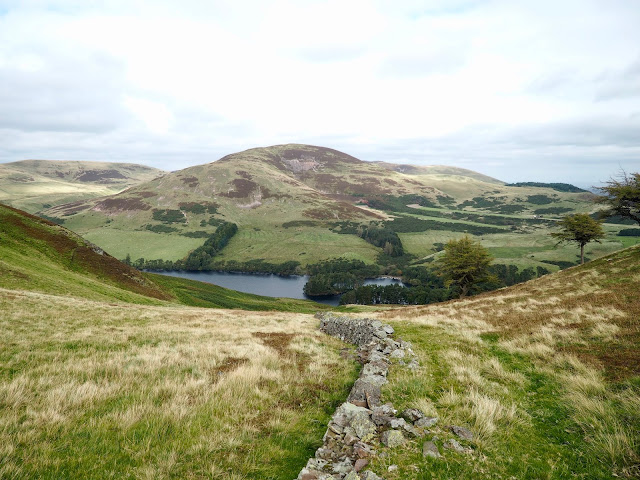 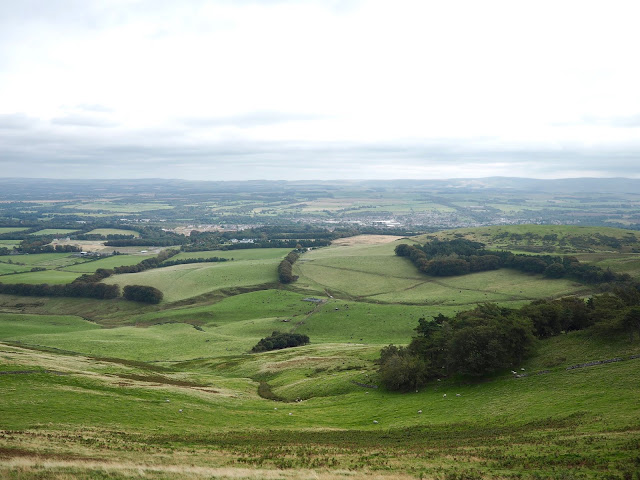 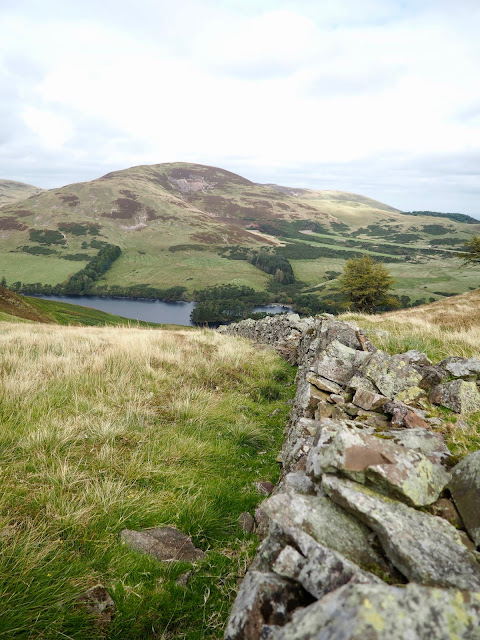 There is a second scramble here, which was a little rockier and muddier than the grassy slope I’d come up on the first part. It’s probably worth noting that there are clear paths the whole way, so you’re highly unlikely to get lost, but the condition of them varies. I was lucky given that it was a dry day, but I imagine they do get slippery at times. To the left, there were open views of the surrounding towns and countryside, and I could even just make out North Berwick Law in the far distance. Although the sun was hidden behind clouds, it was still a pretty clear day to see so far! The second scramble wasn’t that long either, and then I followed a more level path around the hillside and along a plateau.

The final ascent is actually the easiest, and the shortest, to reach the peak of Turnhouse Hill. It took me about an hour from Flotterstone Inn to reach the top I think. It was extremely windy though, which did lower the temperature somewhat – although my bigger issue was the way it made my ears hurt! Because of this, and the aforementioned time constraints, I didn’t linger too long on top. As it was a weekday, there were only a handful of other people around – most seemed to have done this in reverse to me as well. From the summit, you can see the peaks of several of the other Pentland Hills, and even between the gaps back towards Edinburgh and the Firth of Forth. The sun was starting to emerge as well, which made for some nice lighting on the hills! 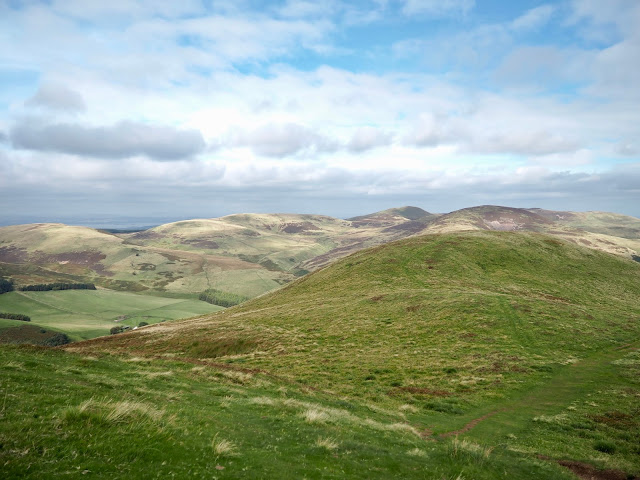 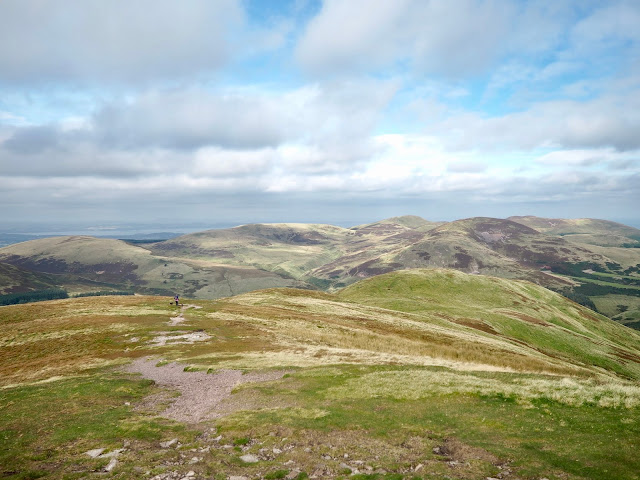 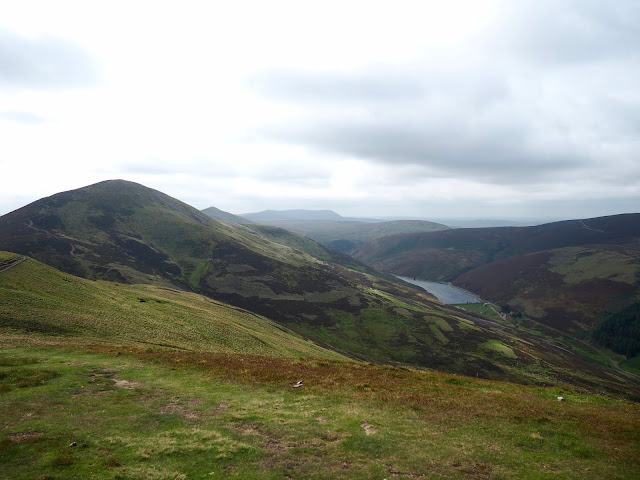 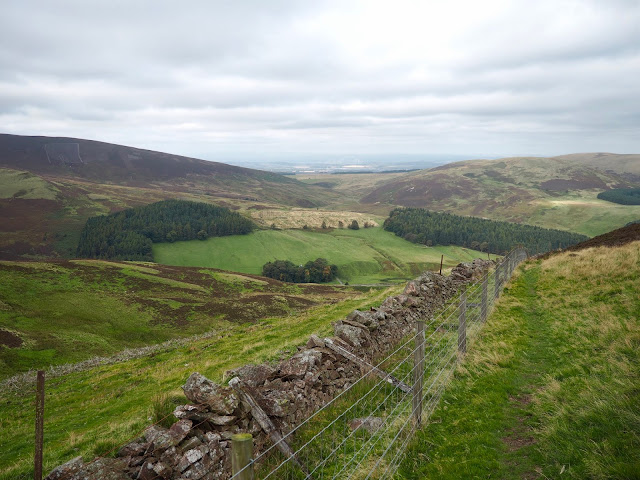 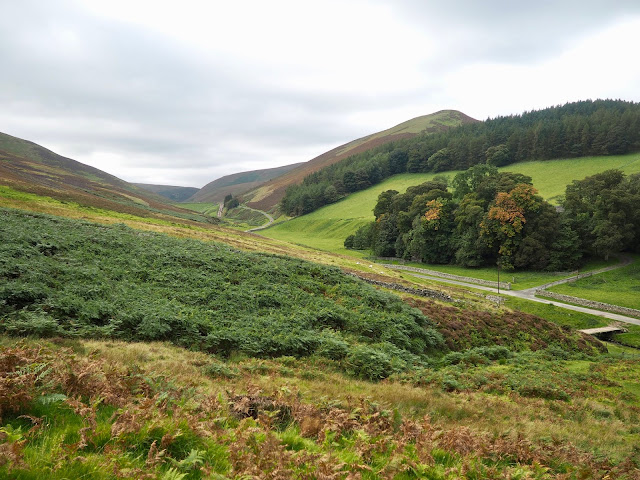 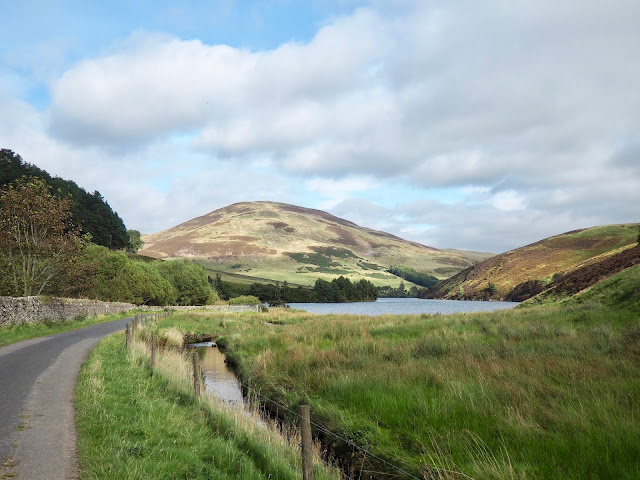 Over the top of the hill, there is a small dip before it immediately joins on to Carnethy Hill, which in turn connects to Scald’s Law. So you can do all three of them in the same hike, each one progressively taller than the last. I wasn’t doing the whole lot though, so I started my descent. This isn’t actually marked on the route map from the information office, but it’s easy enough. There is a gate between fields in the dip, but instead of passing through, I turned right, and followed a rough path alongside the fence and through a field, to eventually rejoin the road below. As in much of the Pentlands, there were sheep in this field, since most of the area is farmland, but as long as you don’t bother the sheep, they’ll just move out the way as you approach.

The ‘hiking’ part was pretty much done now, as the rest of this was a flat walk around Glencorse Reservoir, to get back to Flotterstone – part of which I had done before on this walk. This is all paved roads as well, so it’s a very easy, leisurely walk, past Castlelaw Hill. The sun came out at this point though, so I got some nice views across the water as I went. It was also pretty cool to look over at Turnhouse Hill and realise that I had just been on top of it! If I’d had more time, I could have easily gone slower and sat by the reservoir for a while, but I wanted to make the next bus back into the city. It was a nice countryside walk though, surrounded by such picturesque scenery, and a relaxing way to end my outing, after the more strenuous hike at the beginning. 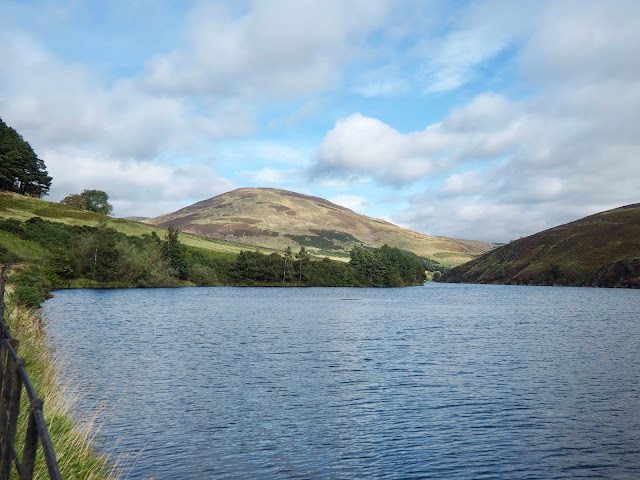 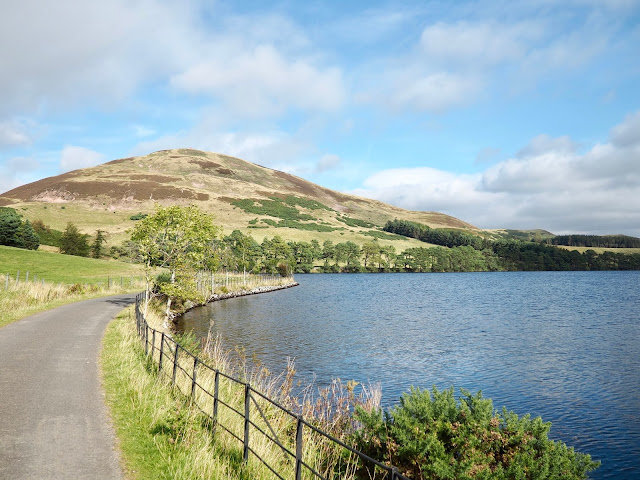 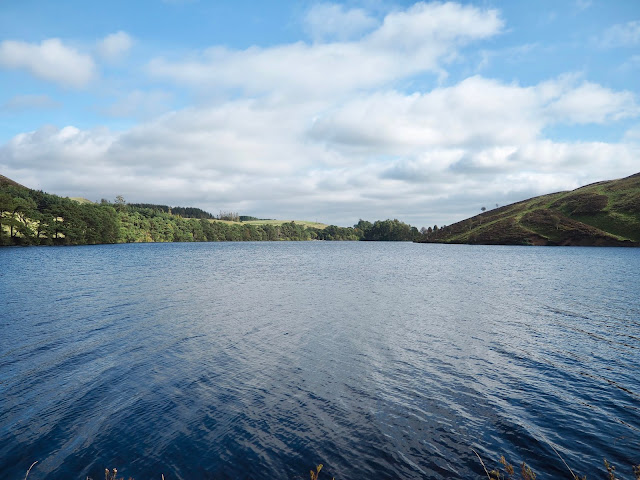 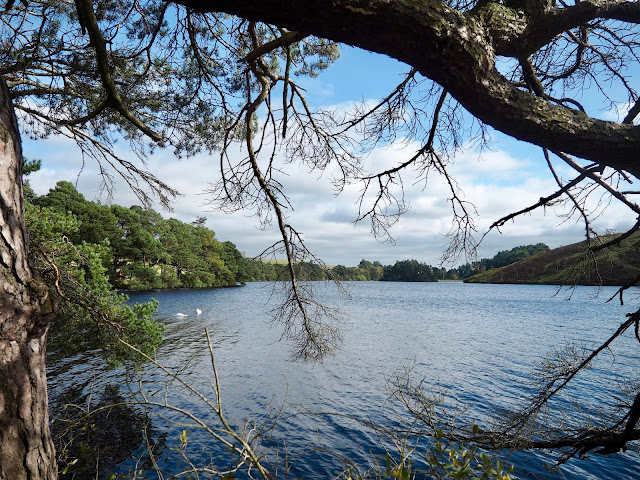 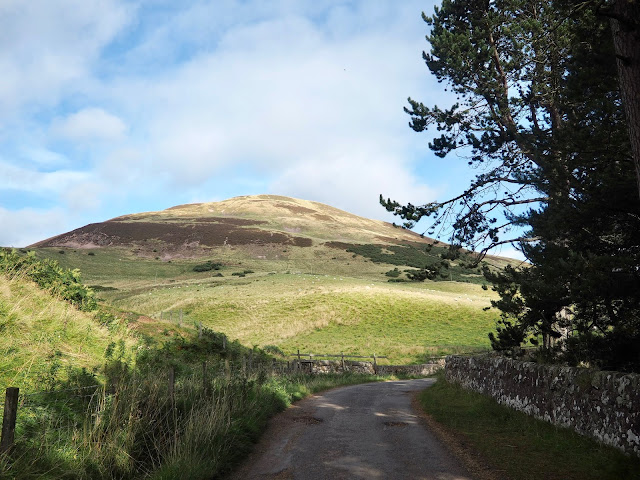 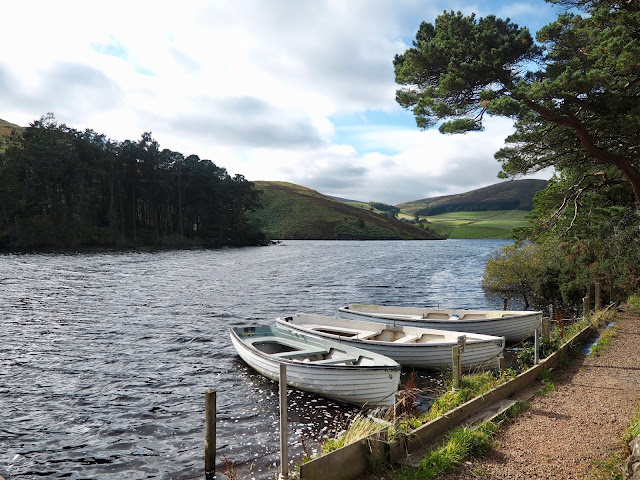 This is one of the great things about the Pentlands, is the variety of routes available, of different lengths and difficulties. Turnhouse Hill isn’t the highest peak, and you can do this route in just a couple of hours. But you still get a bit of a workout on the ascent, and some excellent views around the area from the top. I’ll certainly be back to do it again, and add on Carnethy and Scald’s Law some other time, but it was a great route option for getting out the city and some exercise in the sun for a few hours.