We finally got some good weather here in Edinburgh recently, so a friend and I made the most of our day off last week to go on a little day trip. I’ve been enjoying seeing more of my own country on these sorts of day trips in the last year! We actually meant to do this last year and ended up cancelling for some reason, so I’m glad we finally got around to it. The plan was to take the train to Falkirk, just west of Edinburgh, to visit the Falkirk Wheel and then walk along the canal to reach the Kelpies. The day was as much about the walk as it was the sights themselves! 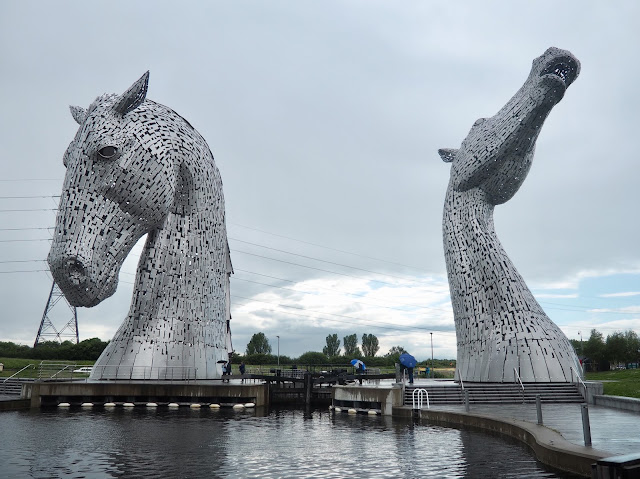 There are two train stations in Falkirk, but a return ticket is valid for either of them. We took the train to Falkirk High first, as it is slightly closer to the Falkirk Wheel. From the station, we had to walk about 40 minutes along the Union Canal to reach it. The wheel was built to connect the Union Canal, which runs from Falkirk to Edinburgh, to the Forth & Clyde Canal, which bisects the narrowest part of Scotland between the Firth of Forth and Firth of Clyde. Along the Union Canal, we had the water on one side and the railway tracks on the other. It was such a sunny day, and there were only a fewer other people around (it was a Monday), so we ambled along. Well, I say ambled, we both have a naturally fast walking pace, so we probably did all this in less time than other people might!

We soon reached a few locks in the canal, which descended down to the Falkirk Tunnel, the longest canal tunnel in Scotland. It’s very dark inside, with light coming in faintly from either end. It turned out that it’s very close to the Antonine Wall, from the Roman era, but we didn’t take the path to see that as we didn’t realise this until later on. Instead, we continued straight on towards the Falkirk Wheel. The Union Canal is the upper section, with the Forth & Clyde down below. The Wheel is kind of what it sounds like, a giant wheel that connects the two canals to allow boats to pass from one to the other. We both agreed it’s a little like a ferris wheel, but with only two ‘carriages’, so two boats can switch places at the same time. It is the world’s first, and currently only, rotating boat lift, and is a fairly new addition to the area, built in 2002. We arrived just in time to see it turning, but it is very slow – even taking a video on time-lapse mode, it still looks slow!

There’s a visitor centre next to the Wheel, and various activities in the area. The main option is to take a boat ride on the wheel, but that takes 50 minutes and was a little pricey so we didn’t bother. We had a look around the area, taking photos from different angles. Initially we’d planned to eat later during the day, but it such nice weather at this point – which never lasts long in Scotland! – so we decided to make the most of it and have lunch outside. We got food from the café inside the visitor centre, and managed to get a table outside. We were basically right under the Wheel, so when it turned we ended up in the shade, underneath the ‘carriage’ for a few minutes each time! We spent about an hour having a leisurely lunch in the sun, before heading over to the Forth & Clyde Canal and start our walk west. 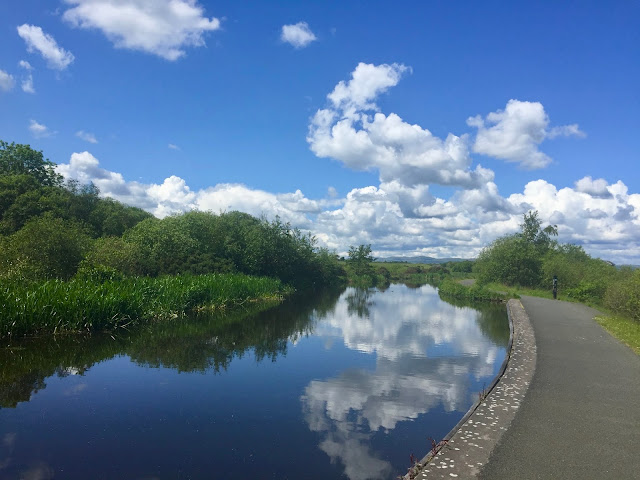 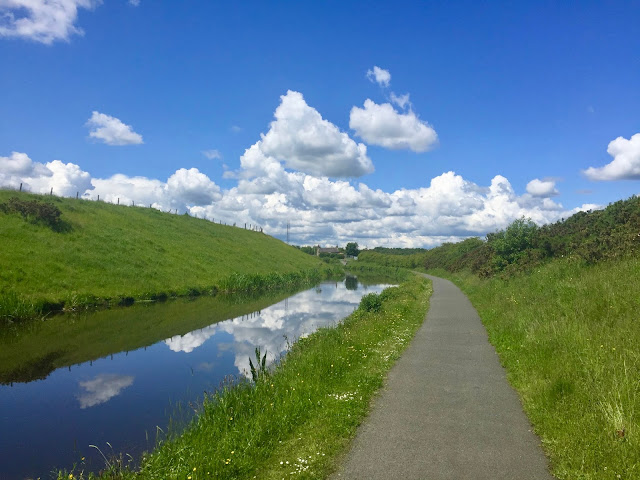 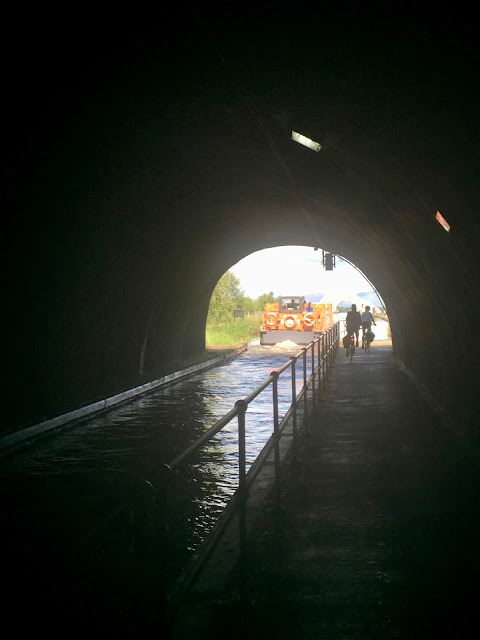 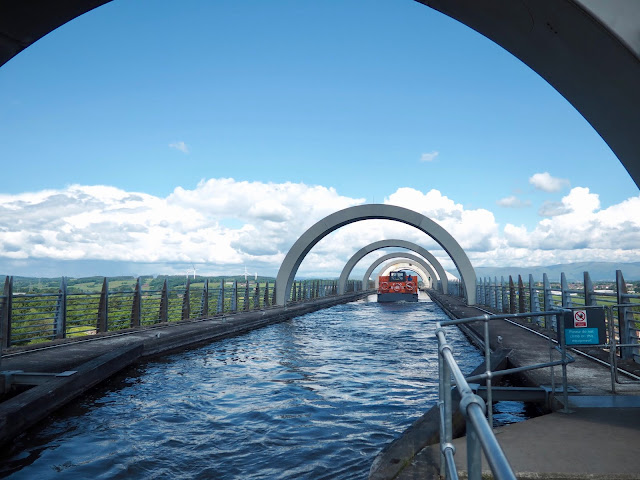 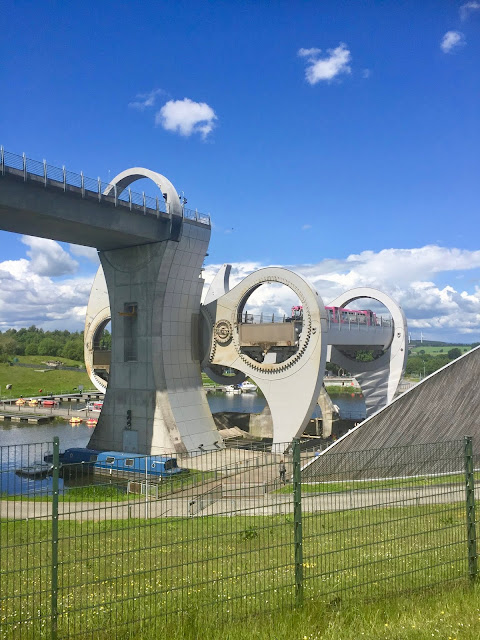 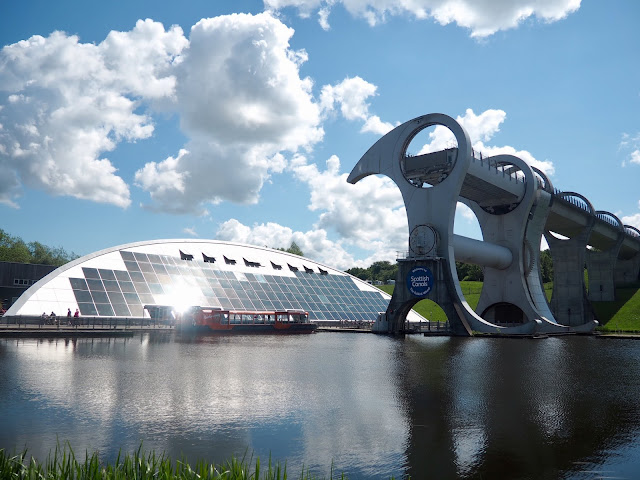 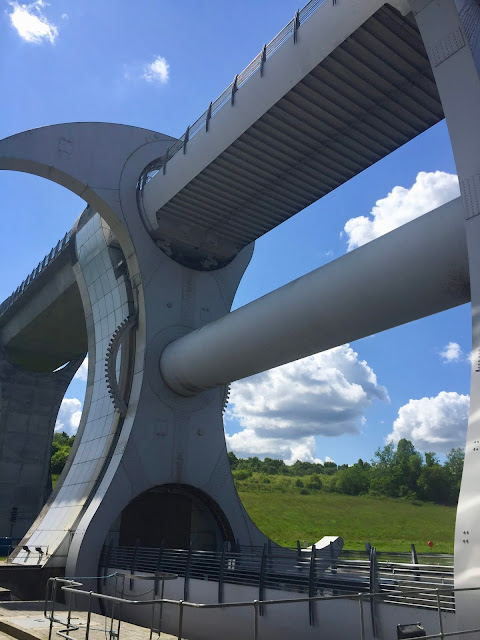 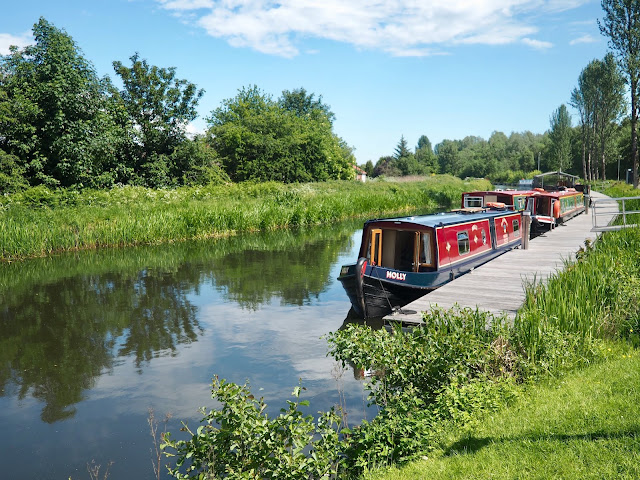 The internet told me it would take about an hour and 20 minutes to reach the Kelpies, which was pretty accurate. It’s a very pleasant walk, alongside the water under the sunshine! Along the way, there are a couple of points to look out for, as part of the canal’s ‘#Wheel2Kelpies selfie trail’. We don’t take many selfies, but these points taught us a little more about the region than we might have known otherwise. One had figures of famous people from Falkirk, including the guy who invented Irn-Bru – what a legend! – and another indicated an old distillery site, that the canal company plans to redevelop soon. We also passed plenty more locks in the canal, and saw quite a few swans along the way

The canal passes through parts of the town itself, though not right through the centre, but we could see plenty of the houses along the way. Being at the junction of the two canals, and central to Lowland Scotland, the town thrived during the Industrial Revolution. However, heavy industry has declined in recent years, so tourism has become an important industry for the town. As well as the Wheel and Kelpies, there’s the Antonine Wall, Callendar House, Blackness Castle, and the Bo’ness & Kinneil Steam Railway for visitors to check out – we might have to go back again for some of those!

As we got closer to our destination, the sun started to disappear behind thick, grey clouds. By the time we arrived, it started pouring with rain so we quickly dashed into the visitor centre next to the Kelpies for a cup of tea while we waited it out. It was nice to take a break anyway, and we could sit and look at the Kelpies in the mean time anyway. These are two, 30m tall, horse head sculptures, installed in 2013, the world’s largest equine sculptures. They are to commemorate the role of horses in Scotland’s heritage and industry, who would have pulled the boats along the canal, amongst other jobs in various industries. The name ‘kelpies’ refers to mythological creatures of Scottish folklore, half horse and half sea serpent creatures, who live in the lochs and shape shift into horses on dry land.

I’ve seen the sculptures from the road before, but never up close like this. Once the rain stopped, we went for a closer look, and you can see how they’re actually quite complicated, crafted from thousands of pieces of steel slotted together in a specific pattern. We wandered all around them, and up close you can also appreciate their size as well! The canal was actually extended to run right along behind them, to join the River Carron and continue on to the Firth of Forth, but we weren’t going that far. We turned back on ourselves and wandered through The Helix, the parkland area around the Kelpies. It’s a large green space, with walking and cycling paths, and where many activities take place for the town to enjoy. 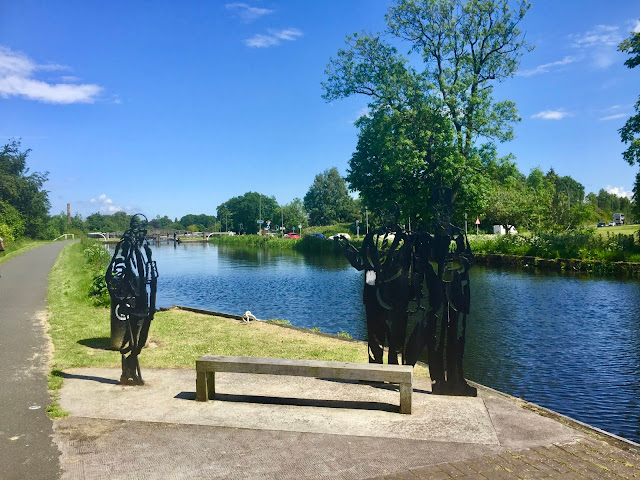 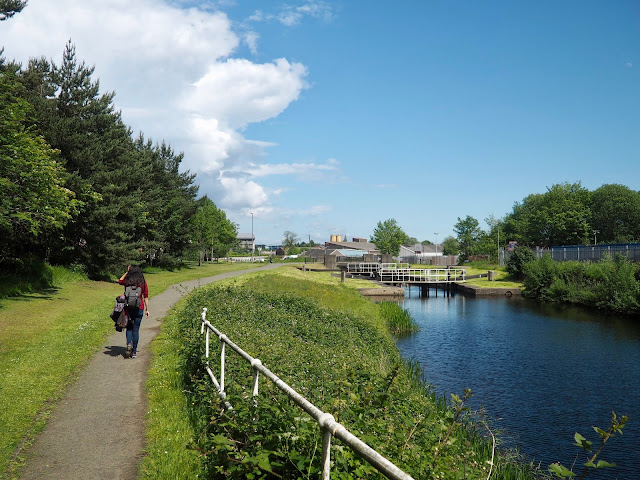 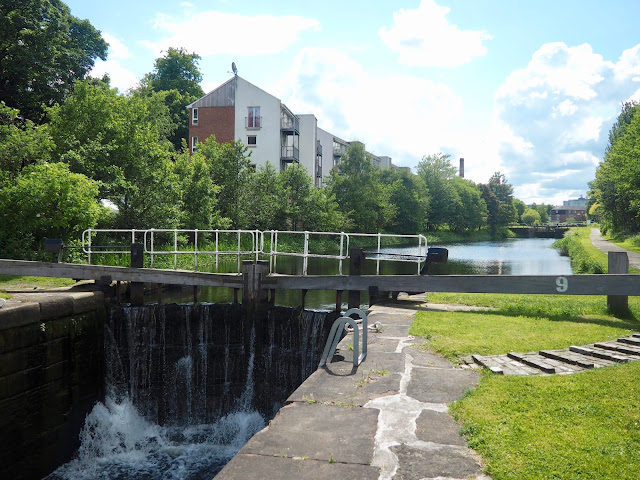 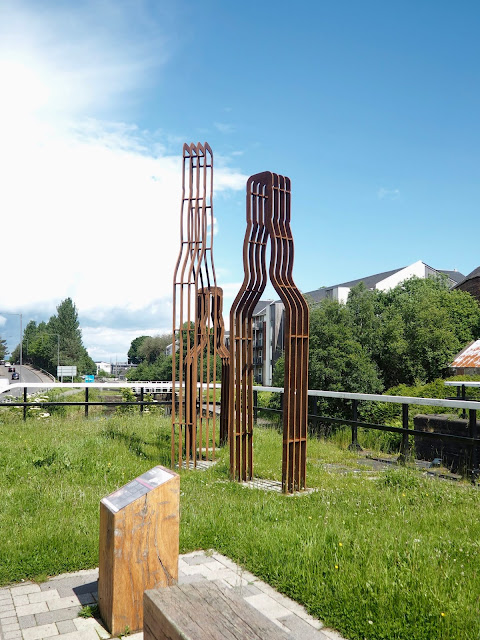 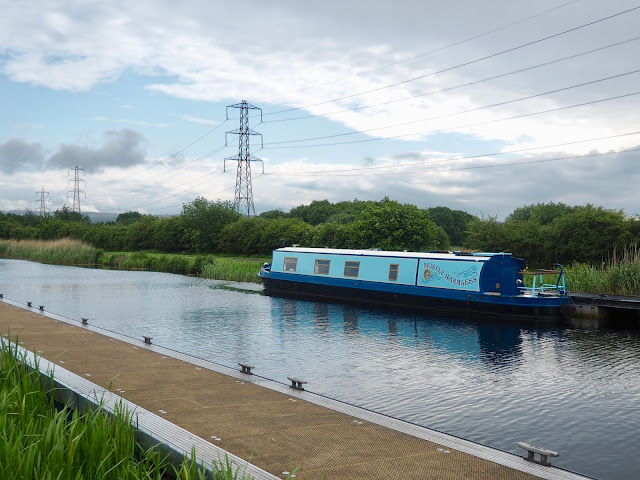 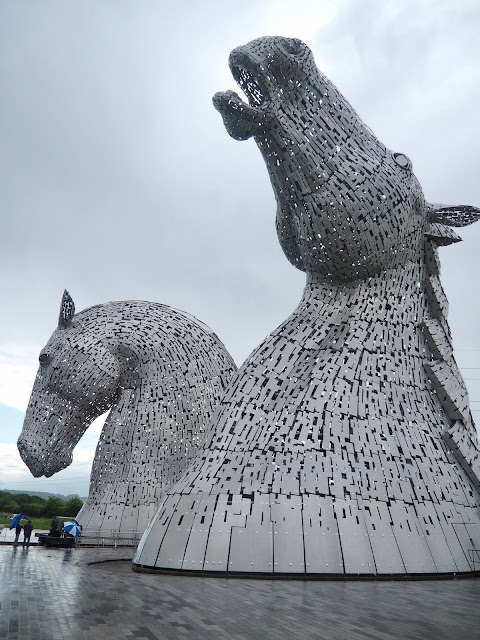 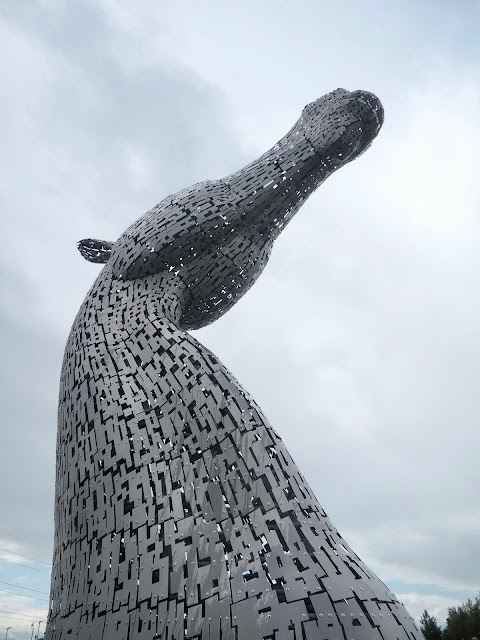 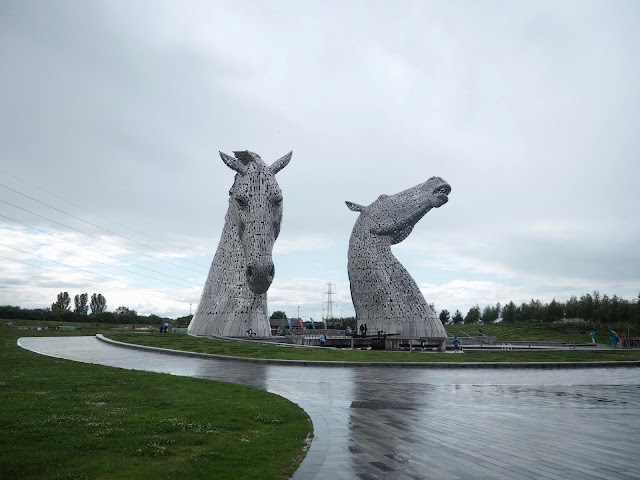 It took us about 45 minutes or so to make our way through the park and the town to reach the second train station, Falkirk Grahamston, which is slightly closer to the Kelpies. This was less scenic than our canal pathways, passing through the streets of the town instead, and the weather was much greyer by that point. We’d also walked a lot already, and were getting a little tired by then, so I think we were glad to reach the station and sit down on the train again, for the quick 20 minute journey back to Edinburgh. It was a nice day out, and a good chance to see another part of my own country that I hadn’t really been to before. The Wheel and the Kelpies are certainly unique attractions, and the canal walk was perfect on a sunny day