Europe’s been having a bit of a heatwave this week, which in Scotland translates to about 20 degrees celsius. I know, doesn’t sound much compared to other places, but for us, that’s fantastic. Everyone is going around in summer clothes, soaking up the sun for the few days we’ve got it (it’s pouring with rain again as I write this…). So anyways, I decided to make the most of it and go for a hike the other day, to the last one of Edinburgh’s ‘Seven Hills’ that I hadn’t been to yet. Technically, Craiglockhart is two hills, western and eastern, but they get grouped together as one for purposes of the ‘seven hills’, and it’s easy to climb both in the same excursion. 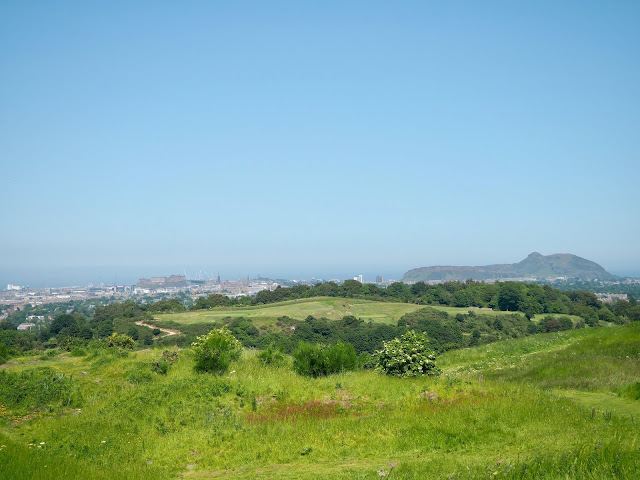 The hills aren’t that big, so it’s unlikely you’d get lost, but I roughly followed this route, as it’s not a part of Edinburgh I know very well. I started near Colinton Road, which is actually walkable from where I live, so my first half hour was just following the road there. I went down to Craiglockhart Pond first, to enter the nature reserve, walking through the rushes to peer out over the water. The path took me around the back of the pond, and I could see the gardens of houses overlooking it – definitely seemed like nice places to live, especially on a sunny day like this.

The path went along the edge of the forest, partially shaded by trees with the light streaming through the leaves, and skirted round the back of a sports centre. I was basically going around the base of the Eastern hill, in order to reach the Western one first. The Western is the higher of the two, so I was getting the steeper climb out the way first, while I still had energy. The path was pretty level, with only a few stairs at one point, and one fork, where I kept to the right, on a straight line. I eventually emerged on Glenlockhart Road, next to the Napier University campus. You could also start from this road as well, but I preferred walking through the forest first, rather than alongside houses.

I crossed the road and went through the fence into the Western hill’s park area. The Western hill is taller, but not as wide as the Eastern, so it covers a smaller area. The ground around the base of both hills, on either side of the road, is actually a golf course, so be aware of flying golf balls! The Braid Hills have a golf course too, and I encountered one last year on the way from Cramond to South Queensferry, so I do kind of wish we’d stop doing this to Edinburgh’s green spaces… I’d much rather hike hills and fields than around the edge of a golf course! Anyways, after I went through the gate, I was basically following a path to the left, and through the forest, which ascended the hill pretty quickly. None of the seven hills are that high, not compared to the likes of the Pentlands anyway, but I reached the top much faster than I’d been expecting! 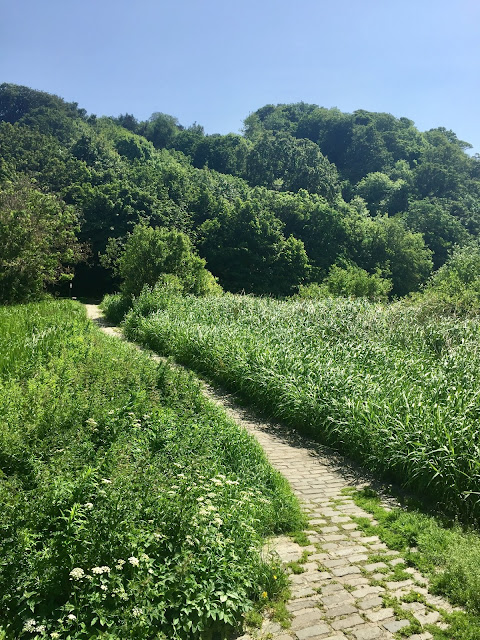 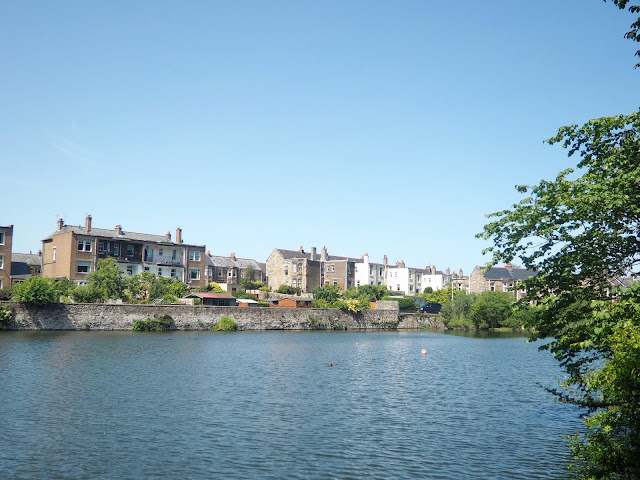 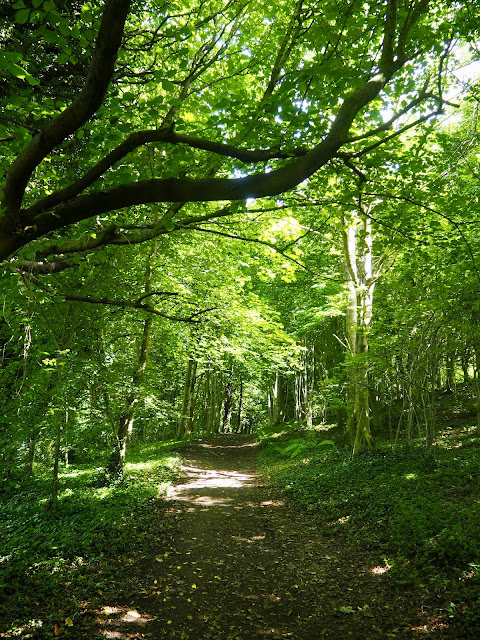 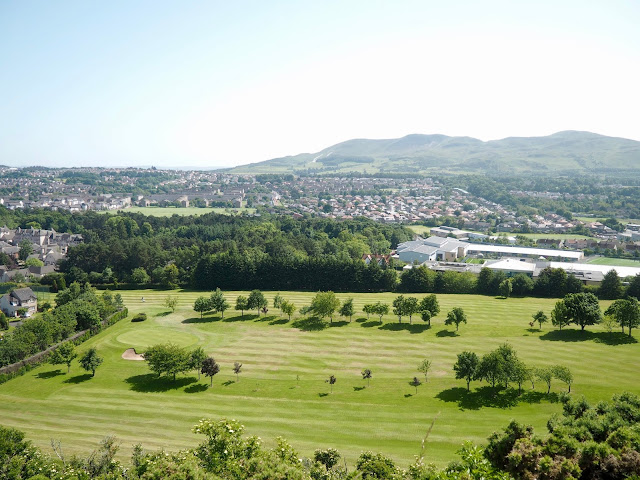 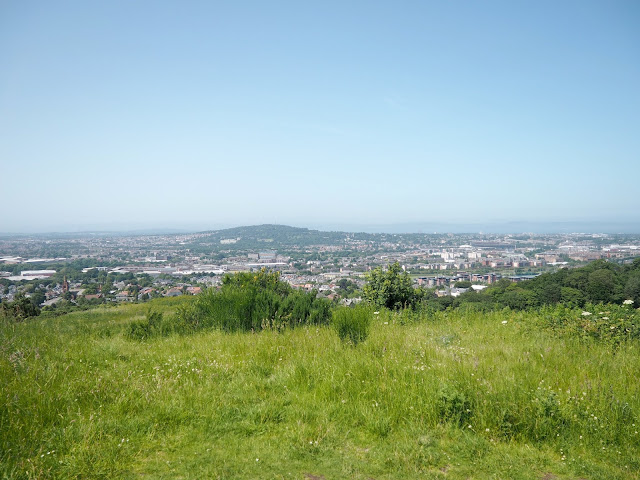 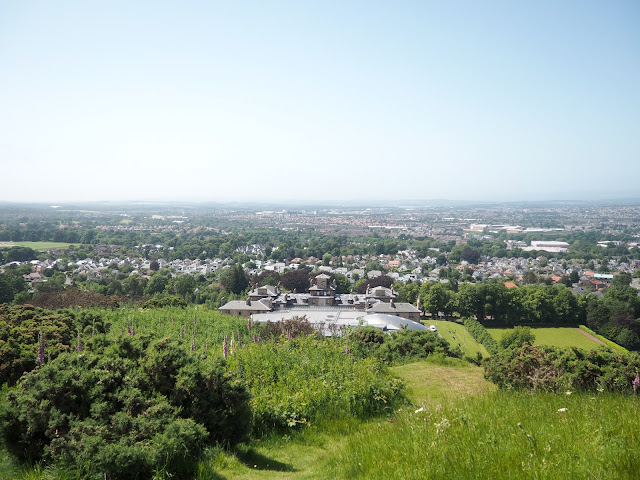 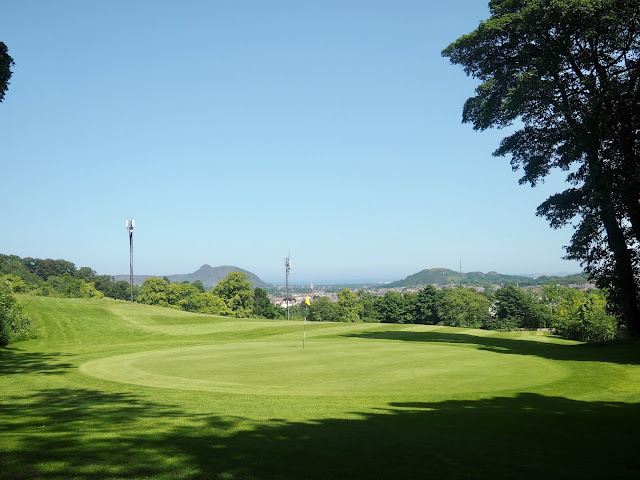 I emerged from the tree line, bearing to the right to reach the summit of the hill. The views from up here are brilliant, a full 360 degrees all across Edinburgh! You can see all the other seven hills, plus the Pentlands, except Calton Hill as it’s hidden behind the castle. Craiglockhart is in the south west of Edinburgh, so you can see all around that side of the city, including the likes of Murrayfield Stadium, plus over to the Firth of Forth, and even more hills way, way over to the distance in the west, since it was such a clear day! There’s good views from all the hills in Edinburgh, but this is certainly one of the best for a full 360 panorama! The summit is fairly small, so I wandered around it for a little bit, before heading down again.

I retraced my route back to the forest, but then took a different path back through the trees, veering to the right instead. This took me to the edge of one of the golf course holes, so I had to skirt the edge of that, and then reemerged on to Glenlockhart Road again. I followed that to the left, back around the base of the Western hill, to reenter the Eastern area at the same point I’d left it. I’d hoped taking a different route back down would have been interesting, but honestly, it’s a golf course and the road, I’d have been fine to take the same route as I’d come up really.

Back in the Eastern area, I followed the path back to the fork I’d come through earlier, and this time took the path to the right. This took me through the forest, and up quite a lot of stairs, though they were quite low and wide, or you can take the sloping path next to them instead. It wound up gently through the trees for a while, not as steeply as the other hill this time. Eventually I reached this unusual wooden sculpture thing – I’m still not really sure what it is? – and at this point, my route advised me to go right, down the stairs and through a gap in the wall, to come out of the forest, and reach the summit. 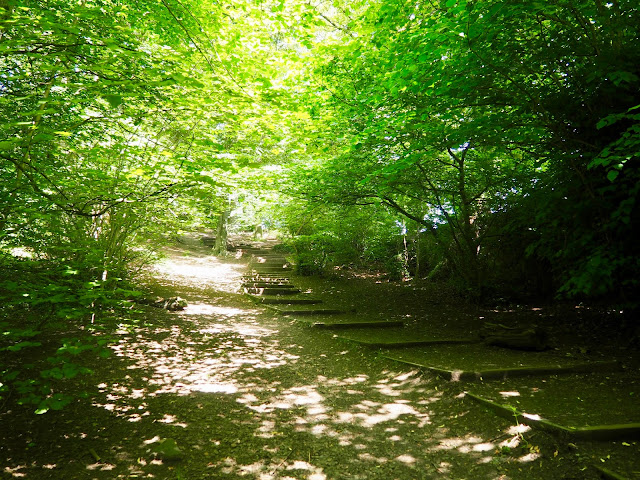 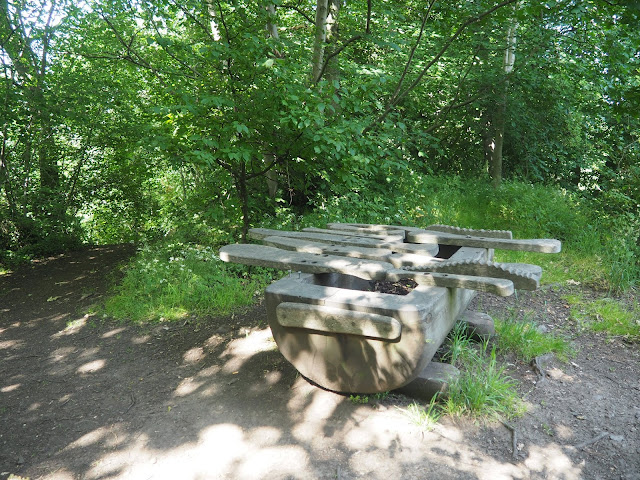 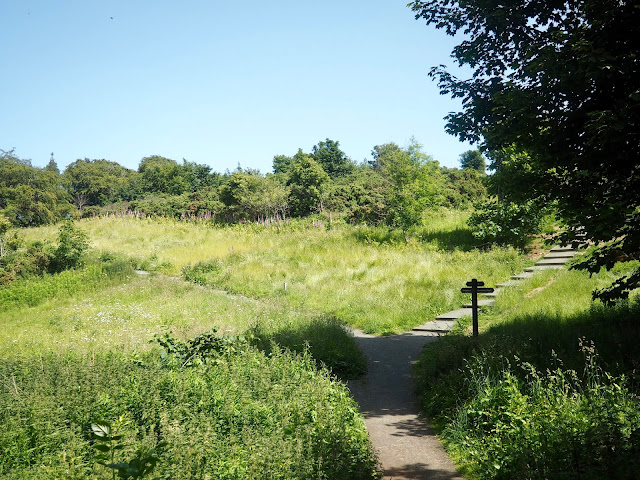 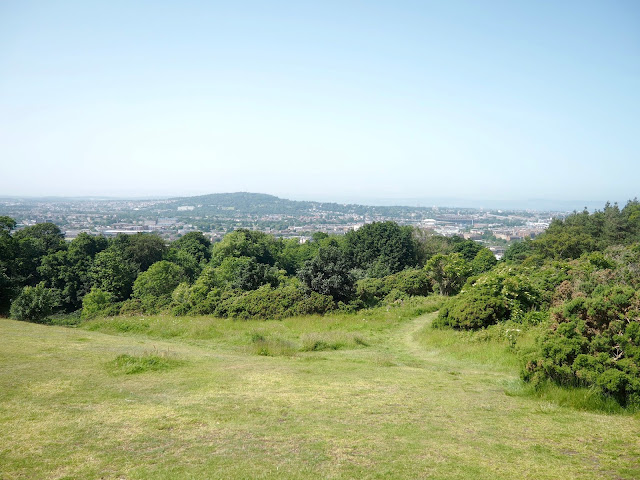 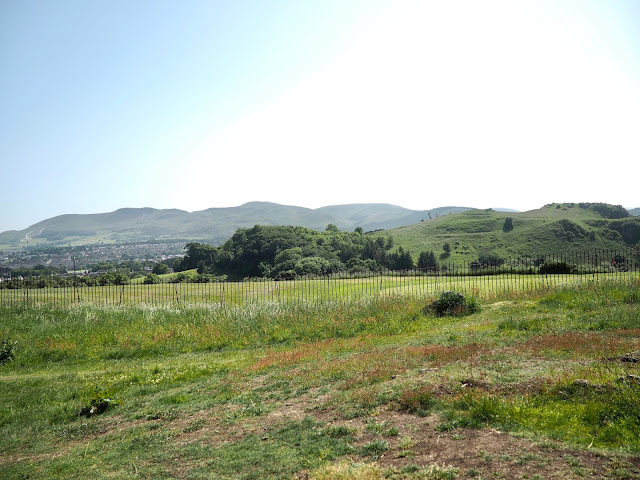 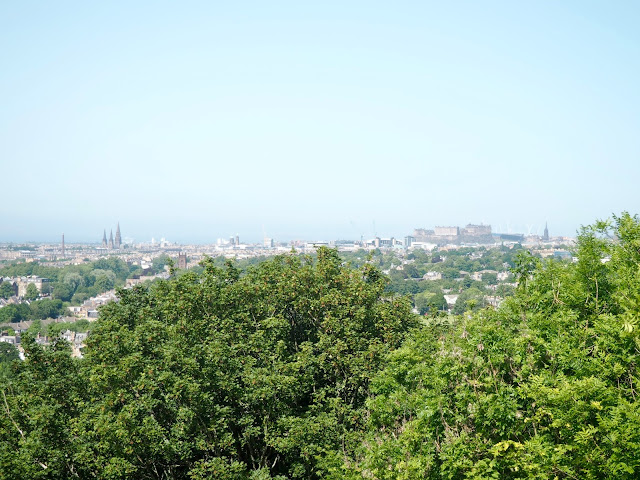 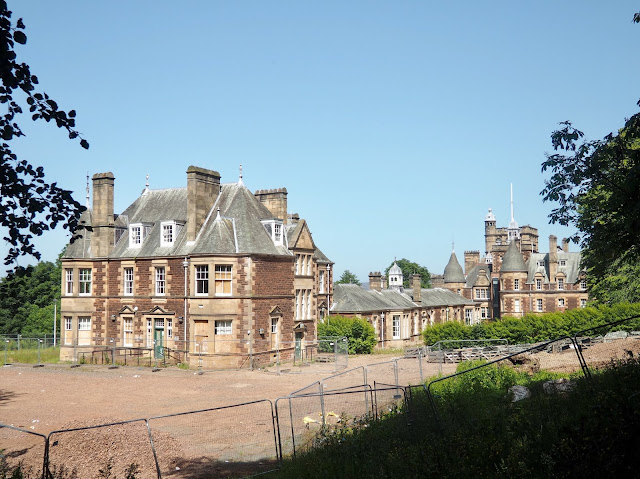 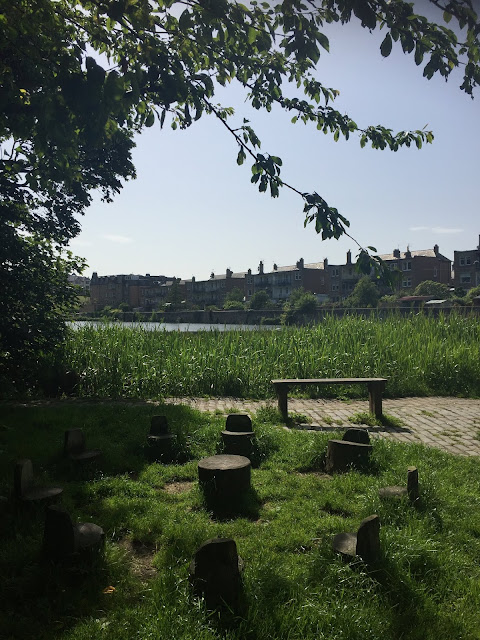 There was a junction of paths, and sticking to the right will bring you up an open, grassy verge, and on to the wide, sloping top of the Eastern hill. There were a few people relaxing and sunbathing up here, and I took the opportunity to take a break on a bench for a while. The view isn’t as panoramic from this hill, as the city centre is obscured by trees, but you can see the Western hill, with the Pentlands behind, as well as to the north, where Corstorphine Hill is. I sat out in the sun for a while, but the wind was bringing a chill to the air, so I soon continued on again. I headed over the slight ridge of the summit, and reentered the forest through another gap in a wall. Going to the right would have taken me downhill but not to the side of the hill I wanted, so I followed the path left, curving back in the direction I’d come from. At one point, there’s a clearing with some old houses being renovated, in a rather unusual architectural style, which looked pretty nice.

The path was leading me back to the junction I’d been at earlier, but I took a detour to the right before reaching it. There’s a rocky outcrop – beware of the steep drop below! – from which you can see over towards Edinburgh Castle, through a gap in the forest. The castle looks pretty small from so far away though! I rejoined the path, and at the junction, I turned right, to go downhill and back through the forest. There are several ways to get in and out of the nature reserve, and most of the forks in the path are signed, so I was making for the pond again (not Craighouse). I took a few sort of ‘shortcuts’, down some switchbacks and some stairs, eventually finding my way back to the start again. I hadn’t noticed on the way in, but there’s a tiny set of wooden chairs around a table under a tree next to the pond, which immediately made me think of fairy circles!

From there, it was then just a case of retracing my route back along Colinton Road and home again. As I say, none of Edinburgh’s hills in the city are huge, but this hike was quicker than I’d expected, given that there are two summits to scale. It was certainly a nice day for it, with clear weather to make the most of those panoramic views. There were a few other people around in the area, but certainly far less than in other parts of the city on such a sunny day. And I’m pleased I’ve ben up all seven hills now!

Hi Charlotte. I live in Fife and have done most of the Edinburgh Hills. Still got Craiglockhart and Braid to complete. Thanks for the interesting accounts of your wanderings around the city. Brian.