For the third destination of my African trip, we left Lesotho again to return to South Africa, headed for the coast. Specifically, the Wild Coast, a stretch of unspoiled, remote land in the Eastern Cape, between Port Edward and East London. Chintsa was our specific destination, a small beachside town. When I book these group tours, I don’t do too much research into the exact destinations I’m going to, as I like to be surprised, and it makes it easier to go with the flow of the trip, and not get hung up on wanting to do specific things. However, looking at the Wild Coast now, in retrospect, I would have liked to have spent more time exploring different destinations along it, as we only saw one area of beach, and there’s so much more on offer. I think if I go back to South Africa again, it will hopefully be with a friend from there (they both currently live in Hong Kong though), and we’d drive it ourselves – once I relearn how to drive, it’s been years! Anyways, Chintsa was still very beautiful… 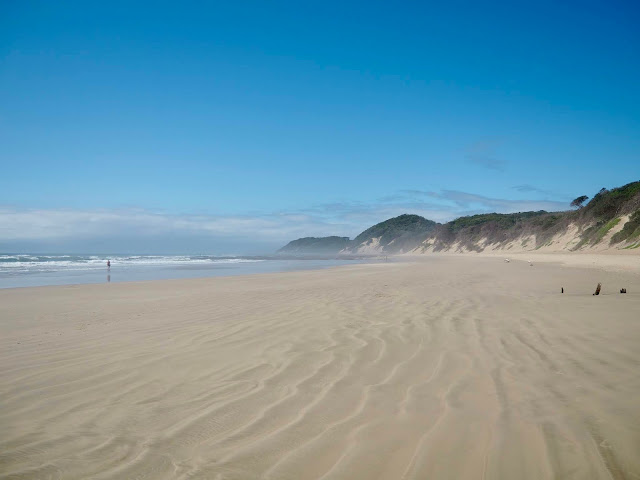 To drive from Lesotho to the Wild Coast takes about ten hours or so, meaning that it wasn’t a particularly exciting day for us – this is why I think we could have driven somewhere higher up on the coast (Port Edward or Coffee Bay maybe) first for a night, then continued along the next day. But hey, I put all this in my feedback for the trip. We had to exit Lesotho again, passing out though a different border crossing this time, a fairly easy process again. We stopped off for lunch in Queenstown – very different to the one in New Zealand – where we noticed massive queues of people waiting in line for the ATMs. Our trip leader informed us that this was the day people received their state benefits, and most prefer to take it out in cash that same day. As we continued to drive south, the land became noticeably greener again, less rocky and dusty though still plenty of hills, and we noticed more evidence of wealth, with fancier houses and cars appearing, a stark contrast to the village we’d seen in Lesotho.

We arrived at our accommodation, Buccaneer Backpackers, late in the afternoon, and had to set up camp for the first time – the rest of the trip would be camping now until Cape Town. The campsite also had lodges where other guests were staying, and we could use the bar, pool, and lounge areas. There was a communal kitchen by the campsite, where our trip leader would make dinner, so once we helped chop the vegetables, we still had some free time before it would be ready. We decided to wander down and check out the beach. We’d caught a glimpse of it as we’d driven down to the campsite, which was set into the hillside, and it turned out to be only a short walk down to the shore.

We passed a large estuary, the water of which was quite murky so didn’t look very appealing for swimming, but there were canoes available at the shore. Across the water we could see the town, so we were actually staying quite far outside it, since you’d have to walk all the way round the estuary to get there. The houses all looked very nice, and we wondered if they’re probably holiday homes for many people. We had to pass some sand dunes to actually get to the beach itself, with large hills sloping up behind it on either side of the estuary. The sun was low in the sky, and there was a cool breeze bringing in a lot of mist from the sea, so we couldn’t see all that far in either direction. There was a huge stretch of sand before you reached the water, where large waves crashed down – it’s not called the Wild Coast for nothing, and we certainly felt it as we stood there in this vast sandy landscape, wind whipping by us. We were able to see some of the sunset, against the hills behind us mainly, before returning to camp for dinner, and spending the remainder of the evening up at the bar (the 6 Nations started that night!). 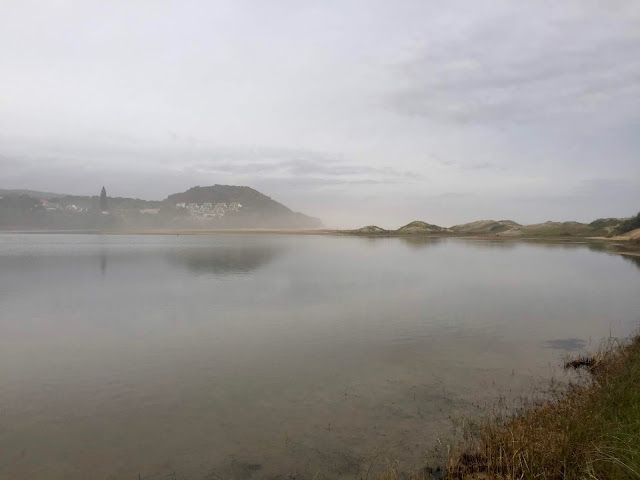 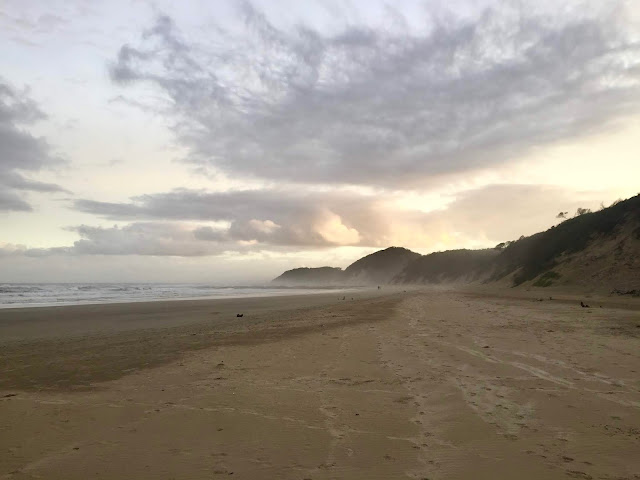 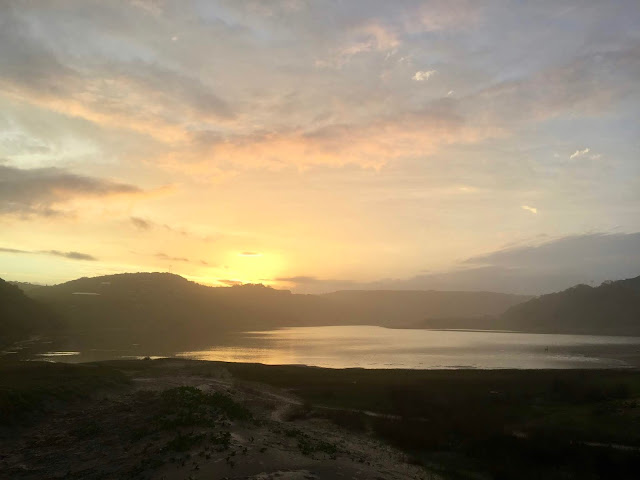 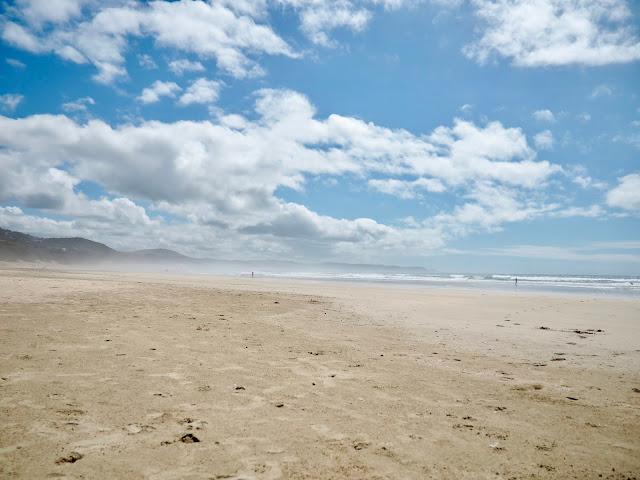 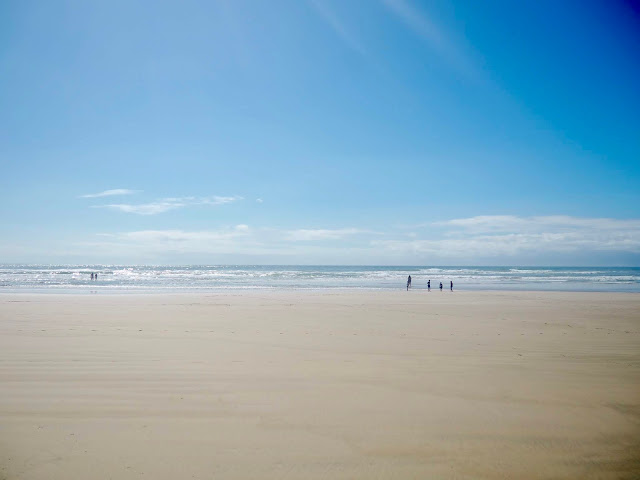 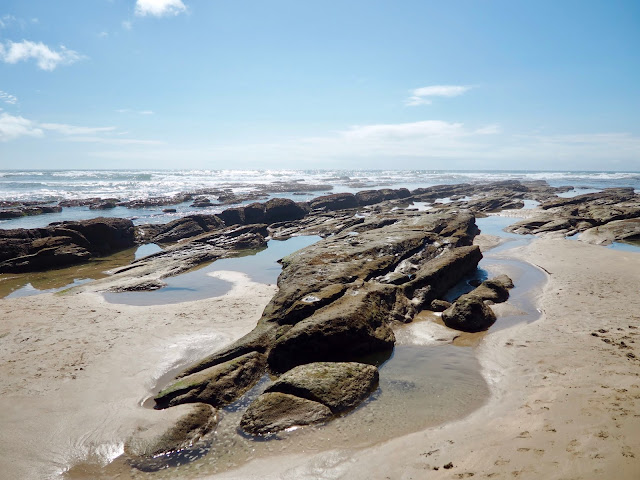 The next morning, we had no activities planned, but there was no chance of sleeping late when we heard children shrieking at the pool at about 6am, plus the sun shines pretty brightly into the tents. Breakfast was a bit of an experience though, as there were a couple of monkeys scrambling back and forth over the roof, looking for any chance to snatch some food, so we had to be pretty careful! Afterwards, we headed for the beach again, ready to make the most of the warm sunshine – we’d finally gotten away from the overcast thunderclouds from the last few days! We grabbed a couple of bodyboards from the lodge as well, and sure enough, when we got to the beach, the waves were as big as we’d remembered. Only now, in the sunshine, everything was bright blue, instead of pale grey. The sea spray was still there, so although we could see slightly further along the shore on either side, it was hard to tell how far it went on, though we’d been told it was for miles apparently! It was one of those days though, that was so hot it makes you a little lethargic, so the thought of trekking along the sand wasn’t that appealing.

We did venture along to the rock pools though, where the water was much calmer, and carefully picked our way over the slippery rocks. We didn’t see very much aquatic life in any of the pools, but it was a very scenic spot, with clear, turquoise waters shining in the sun, against the backdrop of steep green hills. We returned to the spot we’d chosen to lay out our towels, not far from the estuary and path we’d come along, and then hit the water. We were sharing the bodyboards between us, which was totally fine by me, because as fun as they were, it could get a little tiring pushing back through the waves into deeper waters after each surf, and the boards were a little scratchy. The water was freezing at first, and I did that ridiculous thing where you go in really slowly, squealing as the water climbs higher up your body. Jumping in would have been a better approach probably, which is what I did when I went back in later! Yet I never seem to learn that lesson. Anyways, once I was in and got used to the water, it was really fun to surf in on the bodyboards, or to splash in the waves. There wasn’t much scope for just relaxing or drifting in such turbulent water, and between the waves and the temperature, it left us pretty breathless after a while. We dried off quickly in the hot sun though, so we were in and out the water a few times, to keep cooling off. 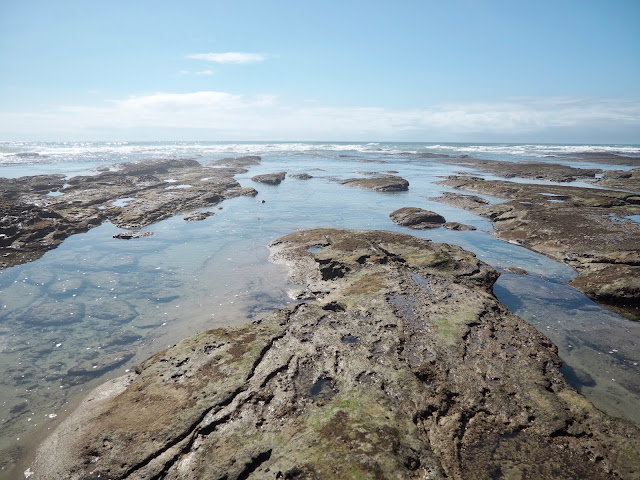 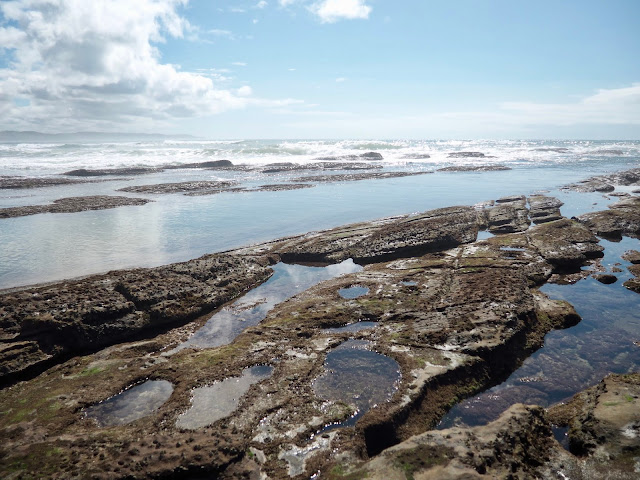 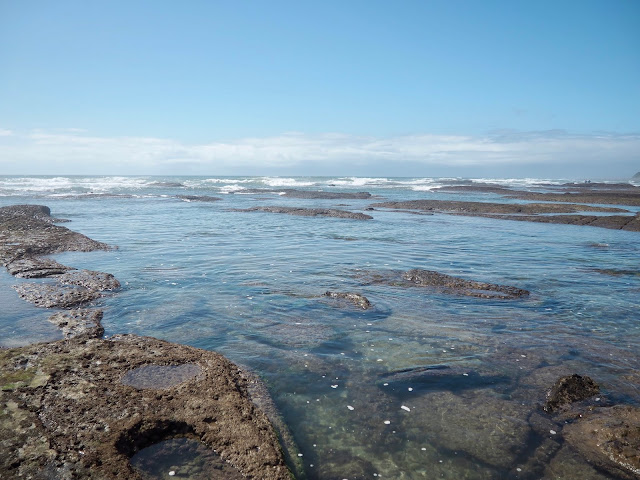 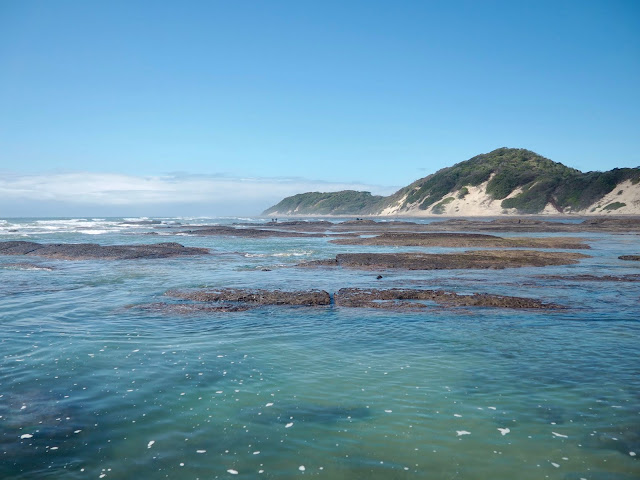 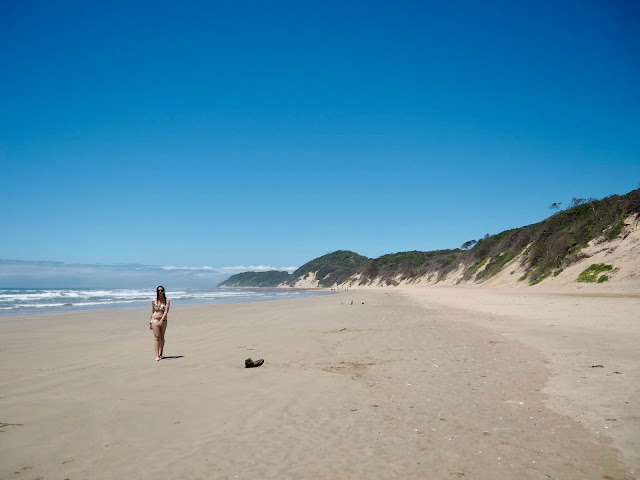 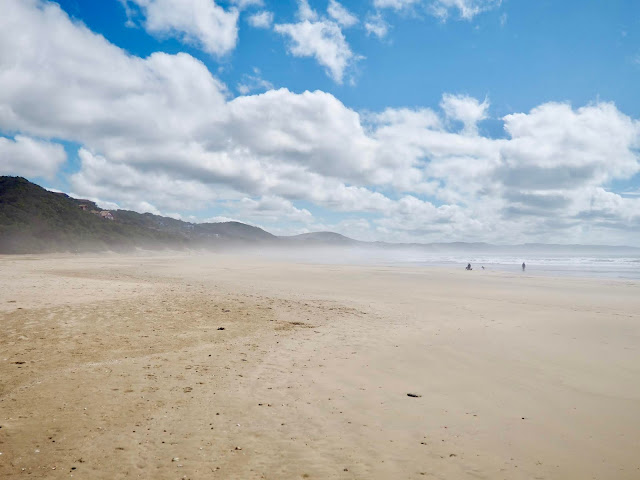 By around midday, we were getting hungry, so we returned to the lodge for lunch, at the poolside bar. The sun was beating down hard by now, so I spent most of the afternoon in the shade. I used to tan well when I was living in Asia, and my skin was used to the sun, but back in Scotland, I don’t get as much exposure to it. I usually burn at the start of the summer, then it fades to a tan over time, but with only two weeks in Africa, I didn’t have much time. And down in the southern hemisphere (especially with that ozone hole over Australia), especially in their summer, the sun is very strong, so I was taking extra care to not burn too badly – I did on the very first day in Durban, and didn’t want to repeat it! The pool water was a bit cloudy too, and I don’t much like chlorine, so I relaxed in the shade, eating lunch and drinking a few beers, while some of the others went in the water. It wasn’t the most exciting of afternoons, but it was hard to know what else to do when the lodge was so far removed from the town or anything else, and I think we were all in need of some rest time after all that hiking over the last few days.

Later in the afternoon, a few of us returned to the bar to watch the next 6 Nations match, which happened to be the Scotland one, so I was particularly invested in it! There was no one working yet, but the reception staff let us go behind the bar to turn on the TV, and we were able to get drinks from them too! I was very pleased Scotland won, of course, and then we dashed back to the campsite for a quick dinner before the second match – our trip leader had very kindly scheduled dinner for us during this break! By the time the second match finished, it was only about 9pm (South Africa being two hours ahead of UK time), but I was pretty tired, so it was time for an early night.

I enjoyed Chintsa, and the beach was very beautiful – the hiking over the last few days had been amazing, but the coast and its scenery was one of the things I’d been looking forward to the most on this trip. As I’ve said, our accommodation, as nice as it was, was a bit removed from anything else though, and I definitely would have liked to have been able to explore a few more areas along the Wild Coast, to get a real feel for it, instead of just this one stop. It was good to have a relaxation day as well, but I perhaps could have maximised my time a little more, though my skin might not have thanked me for it. A corner of the world that I might have to explore more again some day!