One day, I had just one day to see as much of Xian as possible! Honestly, like most people, the Terracotta Army was my main reason for coming here, but since it wouldn’t take up all my time, I figured I’d try to squeeze in some other sights. Technically I was here for two nights, so I did have half of the second day, before my early afternoon flight back to Hong Kong. However this was the last stop on my trip, and after how busy I was in Beijing and Zhangjiajie, and considered I was straight back into work the very next day, I just used my last morning to sleep in and have a little more rest. This just meant that my one full day in the city was pretty jam packed! 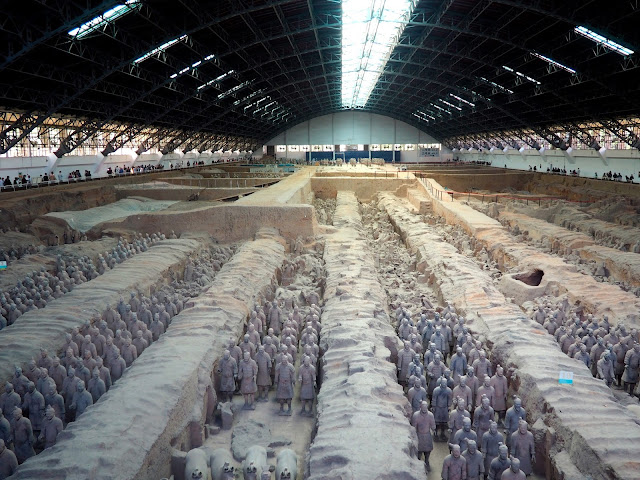 I arrived very late at night, as my flight from Zhanjiajie was at midnight, and then got delayed. However, I met a nice American couple in the airport – the only other foreigners on the flight – who invited me to share their car transfer with them, since the airport is almost an hour from the city, and our hotels weren’t too far apart. Their hotel even called me a taxi to get to mine – thanks guys! I did go to bed really late after all this though, so I wasn’t quite able to be up super early, as I’d initially planned. I rolled out of bed at probably around 9am, and got ready to head to the Terracotta Army. There are plenty of tours available, and most hotels will advertise them, but it’s actually very easy, and far cheaper, to visit on your own. I walked from my hotel to the train station, where just to the right as you pass under the city wall, I caught bus 306, which drops you off right outside the Mausoleum at its last stop. You then have to walk a ways to the entrance, passing by dozens of food stalls and people selling all kinds of stuff, and many people offering guided tours inside, but eventually you will reach the actual ticket office and main entrance. 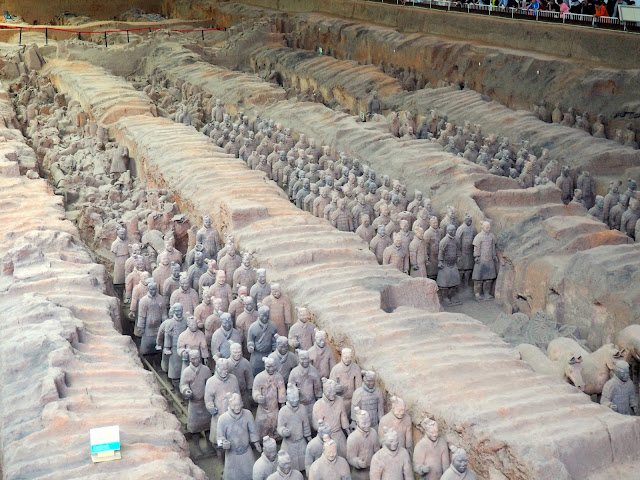 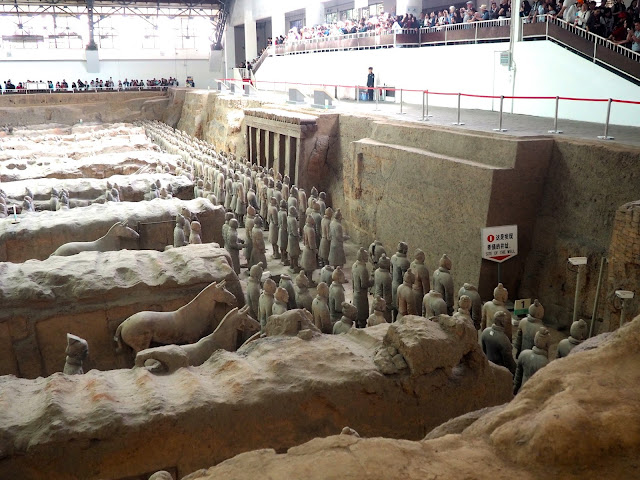 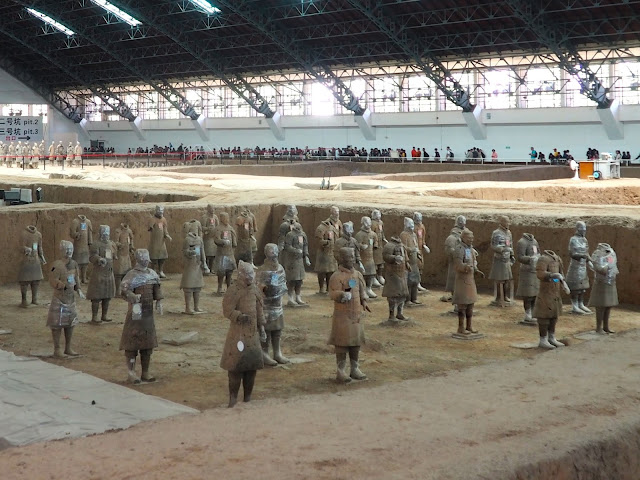 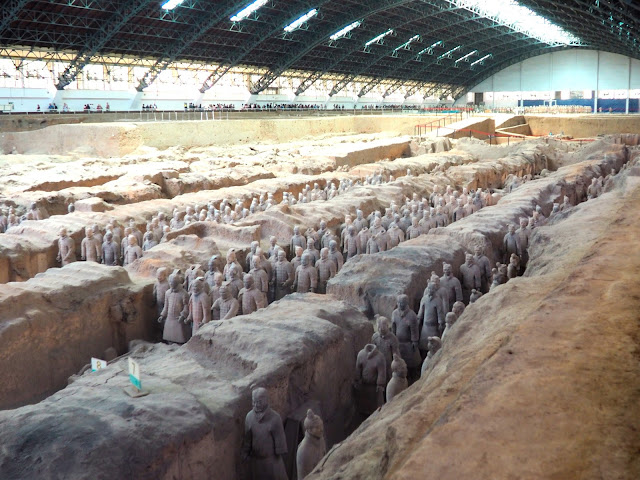 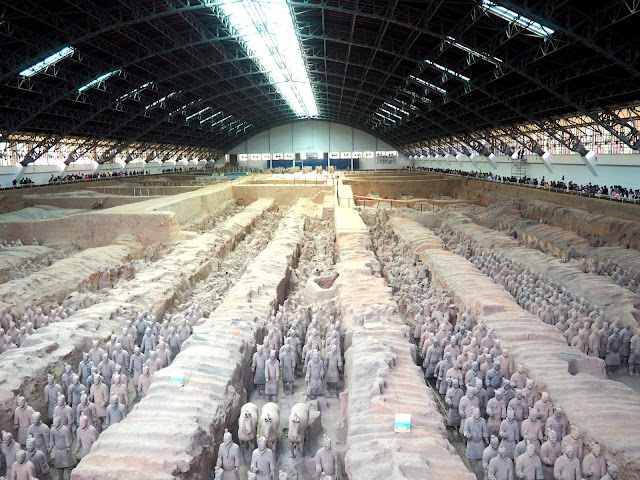 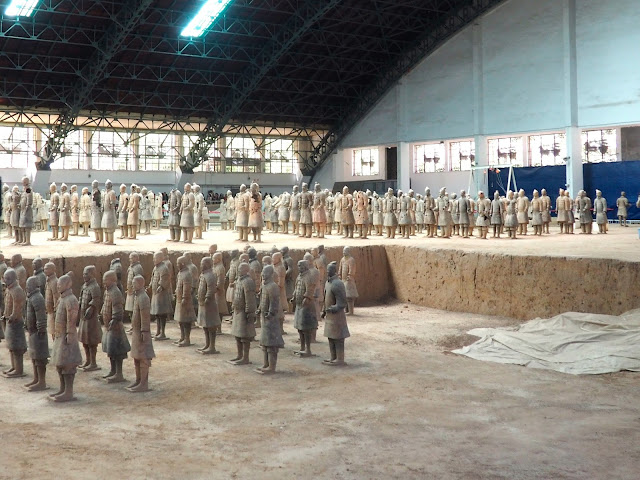 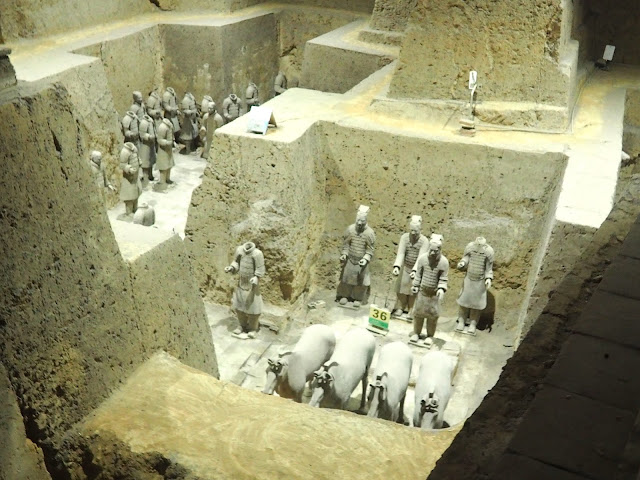 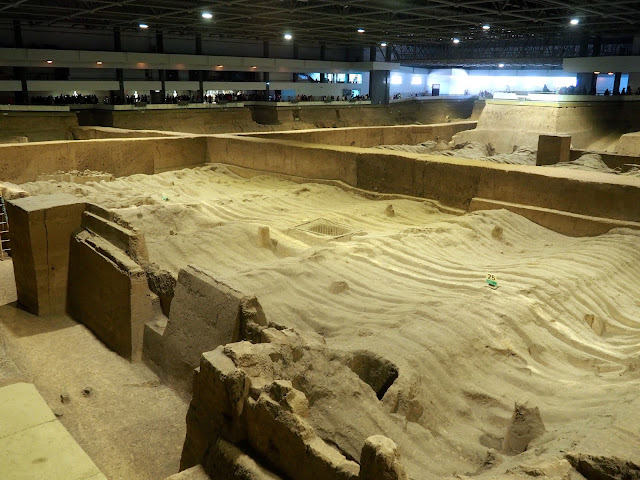 The Terracotta Army is divided between the 3 pits and the exhibition hall. To give some context, and really appreciate how incredible the discovery of the army was, the figurines date back to the 3rd century BC, and the mausoleum took over 700,000 workers to construct, yet was only discovered in 1974, which is why so much is still to be excavated. There are an estimated 8,000 soldiers, along with horses and chariots, and the sites uncovered so far are actually part of a larger necropolis, almost 100 square km in size. The figures represent the armies of the first Emperor of China, and were buried with him to protect him the afterlife. Of the three pits, number 1 is the most well-known, and happened to be the one I visited first. There were a fair number of other tourists around, but it wasn’t too difficult to squeeze my way to the edge of the pit, and hang on to my spot for a while. This was the first pit to be discovered, by accident, when local farmers were trying to dig a well, which you can still see in the pit, and as a result, this is the most thoroughly excavated so far. Its inside a huge hall, and you walk in and look down to be met by thousands of figurines lined up in the earth below. It really is quite astonishing to behold just how many of them there are. Most face forwards, but there is a line facing outwards along each side of the pit. And each figure is unique, carved with different features, and with different heights and uniforms to determine their station. Towards the back of this pit, there are more soldiers standing on a higher level, still being restored. It was easy to spend quite a while in this pit, partly just to walk around the sheer size of it, but also to admire the army from all sides and angles.

I visited Pit 3 next, just a it happened to be along the way, which is the smallest of the three. It seems much deeper than the first, but that may just be because of its size, and only a handful of figurines, including horses, have been uncovered. I didn’t spend very long here, as it’s somewhat underwhelming after the first pit. Pit 2 was more interesting though. The pit itself is barely excavated, but it’s interesting to see how all the tombs look when buried, as intended. The figurines are positioned along corridors, with walls between them to support the roof structure covering the whole thing. Pit 2 also has display cases featuring some of the more notable figurines, allowing you to get a closer look at them. There are some soldiers of higher ranks, and a solider with his horse featured, as well as the kneeling soldier, one of the most unique figurines as nearly all the others are depicting standing; he was kneeling while holding a crossbow it’s thought, though the bow is now gone. Many of the soldiers were buried with real weapons, but these were looted or have rotted away. Finally there’s the exhibition hall – I assume some of the rooms here will hold exhibitions in future, as there were lots of doors and signs that were closed off. The main attraction here are the bronze horse and chariot figurines, unearthed alongside the army, and constructed to be half life-sized. There are also various other items and weapons on display here, but I definitely found the chariots to be the most interesting! All i all though, the entire Mausoleum and Army are just fantastic to see, firstly because of the sheer number of warriors, and their individual features, and they are even more incredible when you remember that they are over 2,000 years old – definitely a must-see sight on a visit to China! 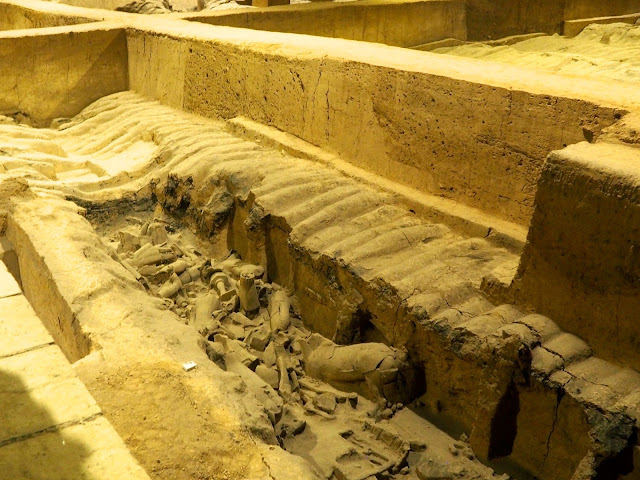 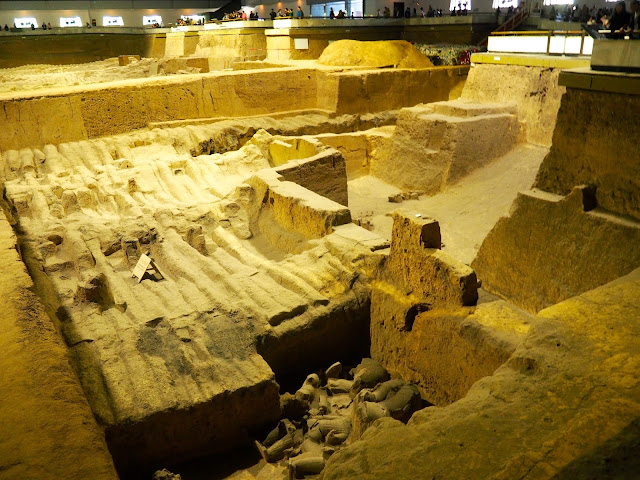 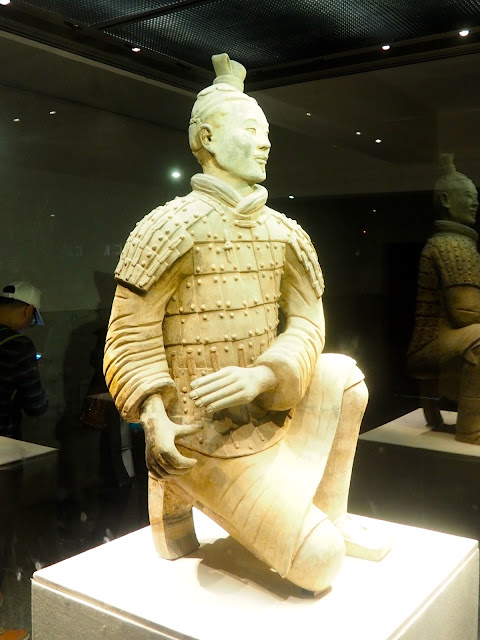 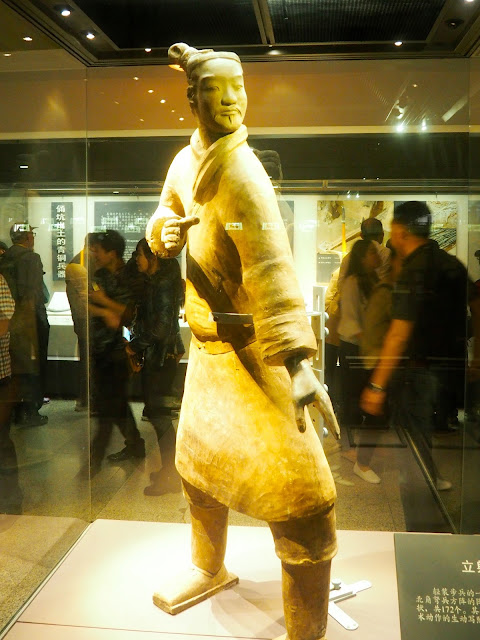 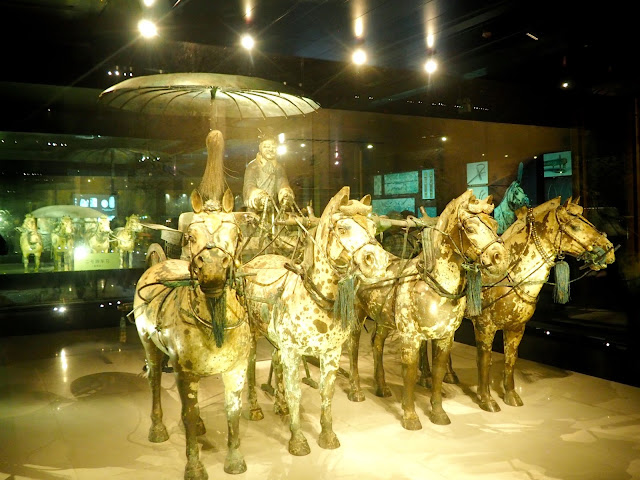 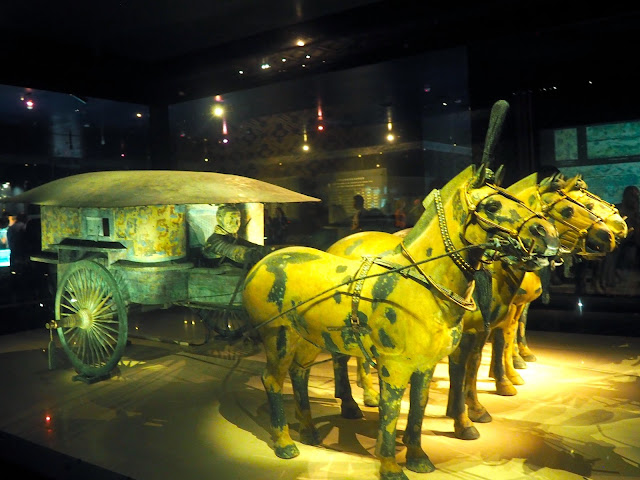 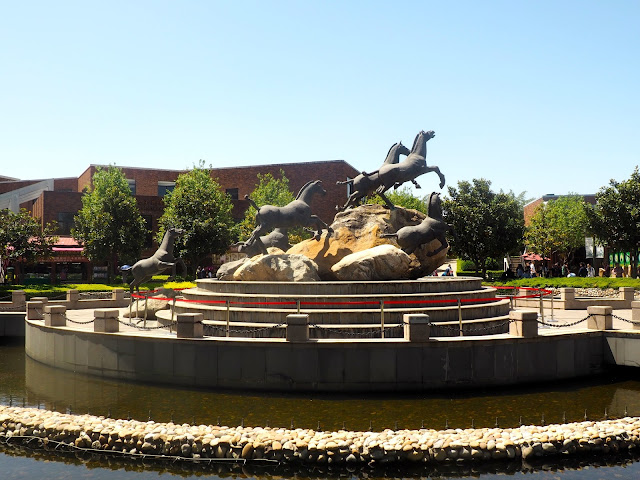 I caught the bus back to Xian, and still had a few more hours to spare, so I decided to see some of the sights in the town centre. There are actually quite a few, more than I had time for, so I skipped over the city walls (which I saw briefly from the 306 bus) and the Shaanxi Museum. I headed for the Bell and Drum Towers, hopping on the subway to speed up my trip. The Bell Tower is in the middle of a roundabout, accessed via a tunnel under the road, so going into the tower itself offers pretty good views of the city. It’s not a tower like the huge skyscrapers I see in Hong Kong, but rather a much smaller, squatter structure. It’s elaborately, beautifully designed though, with bright colours and intricate designs all over. The eponymous bell is situated just outside the tower, and is suitably impressive in size. Inside, there is a museum display about the tower’s history, but only a few of the placards have English translations. The Drum Tower is just a short walk away, and the two are visible from each other. While the Bell Tower has one large bell, the Drum Tower has dozens of drums, lining the outside and inside of the tower, and there are performances there a few times a day, but my timing was off to catch one. Both towers also have various classical Chinese figurines and paintings, all very beautiful.

My last couple of stops in Xian were the Small and Big Wild Goose Pagodas. The Small one was up first, located in its gardens just a few subway stops south of the towers. It may be called Small, in comparison to its larger counterpart, but it was still pretty big when I hadn’t seen the other one yet! I assume the pagodas share their name due to their similar designs, as you can see from the pictures, although their surroundings are quite different. The Small Pagoda is in a small, leafy garden, sheltered by foliage. There’s a nice pond nearby, which I would have spent some more time beside if I’d had the time. There’s also a huge bell next to the pagoda – bigger than the one at the Bell Tower! – which you can pay a few yuan to ring yourself. By contrast, the Big Pagoda is (obviously) much bigger, and in a much larger, more open space. There are various shops and restaurants along the sides of the square it’s situated in. The most impressive view though, is definitely from the north side, where I exited the subway, from which you can view the Pagoda with the fountain display in front of it. It’s a huge square of fountains, which turn on and off in various sequences and patterns, and you can walk amongst them if you’re not afraid to get wet! I’ve read about a music and lights display with the fountains at night, but I was too exhausted to stick around or come back later on. The southern view is quite impressive too, with the statue of the monk in front of the pagoda. I ended up not paying to go inside, partly because I cannot begin to explain how tired I was by this point in my week, and partly because I thought I’d probably seen the most impressive views of it already. It was definitely worth seeing what I did though. 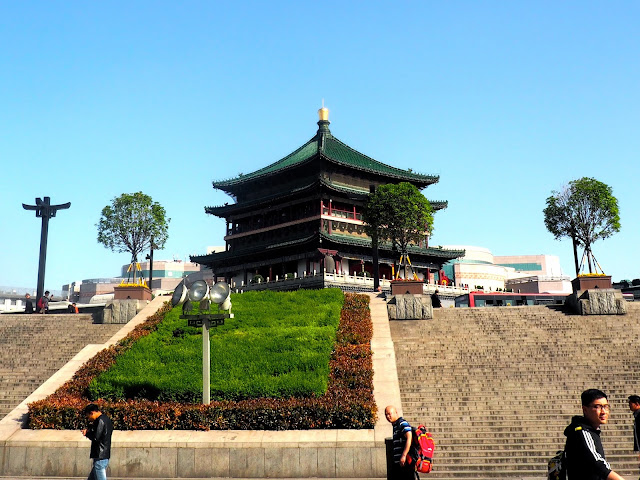 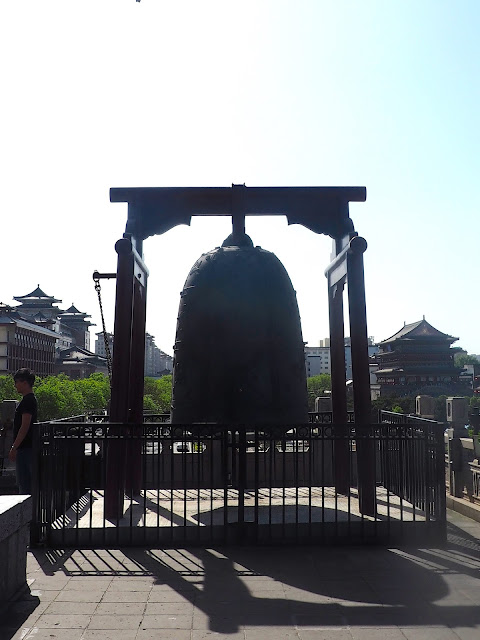 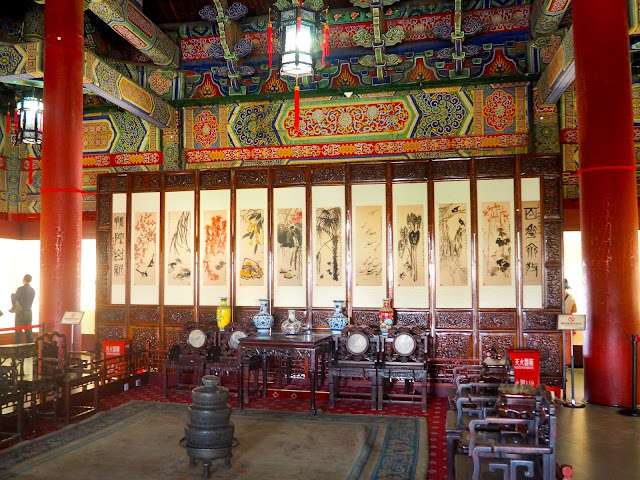 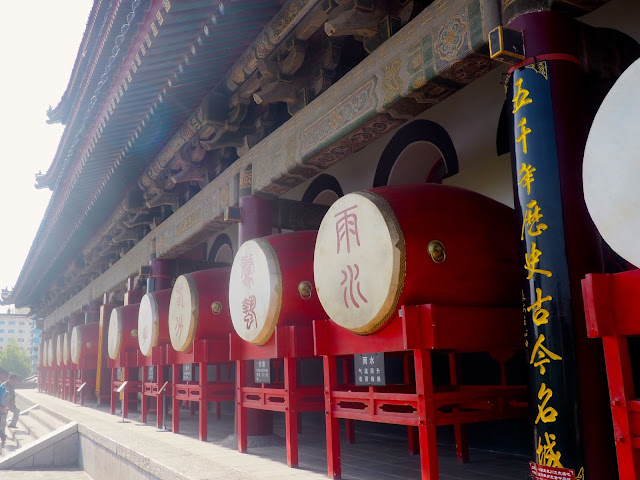 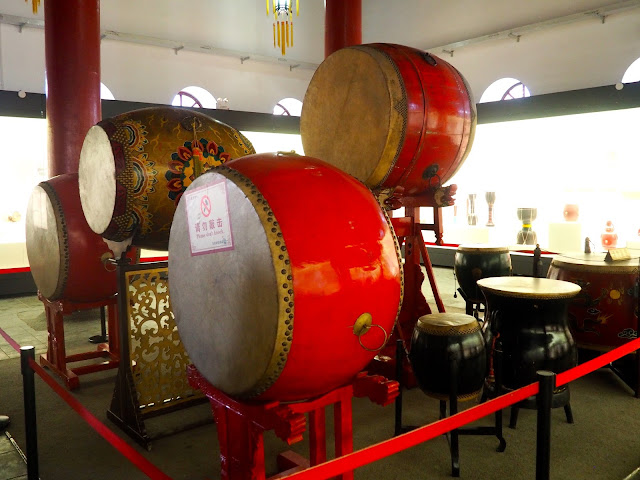 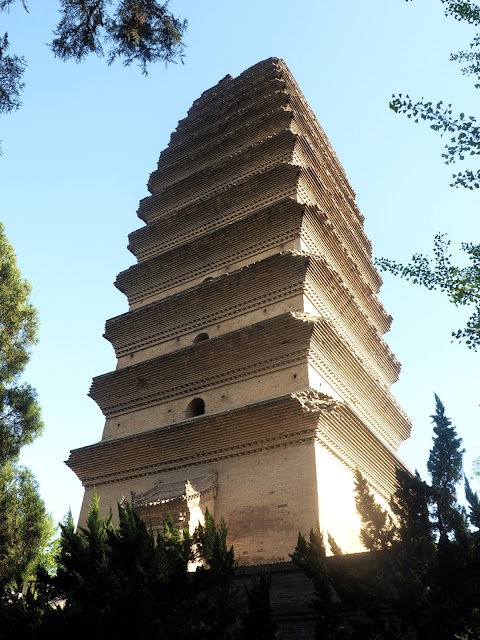 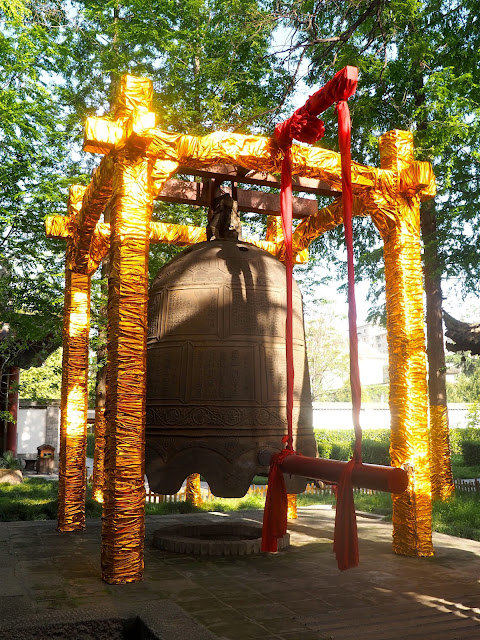 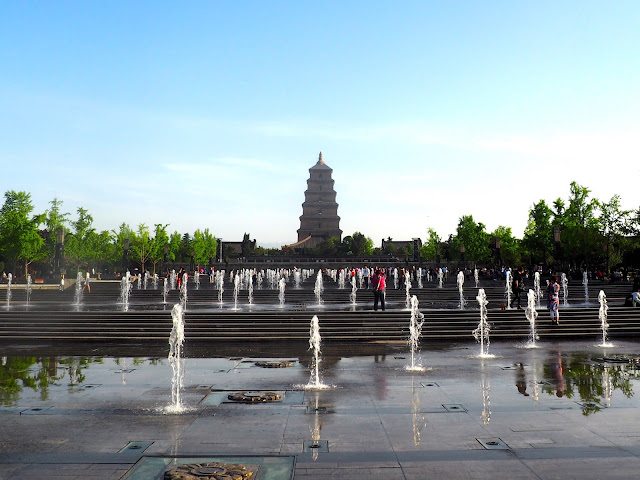 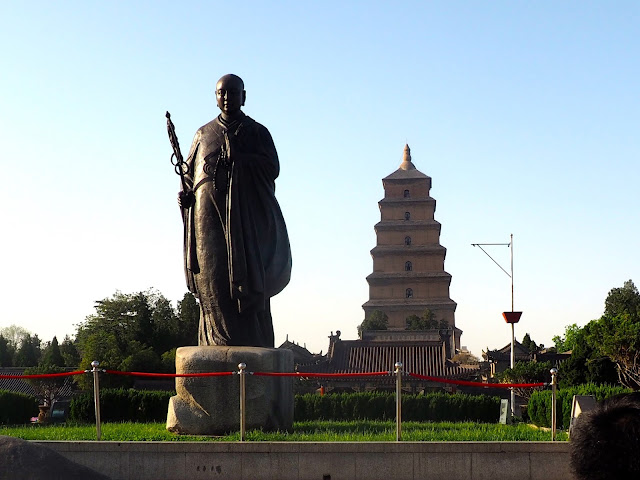 And then my trip came to a close! I headed back to my hotel for the evening, and as I mentioned, slept in a bit the next morning, before catching my flight back to Hong Kong (which involved a connection, so it was a fairly long day). All in all, I’m very happy about how much I saw and did in the week. Yes, it was a little rushed at times, but I think I’d have regretted skipping out on any of the places I saw. I doubt a longer trip would have been anymore leisurely either, as China has so much on offer, that I would have just crammed even more in! While it’s not a country I’d choose to live in, as I do in Hong Kong, for various reasons, there is so much fascinating history and culture there, that I’d highly recommend a visit to anyone! And what with my double entry visa, I’ll be returning some point soon!