So considering this was my first trip to Africa, I had to try to see some animals, right? Now, safari was not the main focus of the trip I had booked, rather it was more about landscapes and natural scenery and hiking etc. But, there were still some animal opportunities to be had. Some of these will come in a later post, but this is the first part. We spent one night in Addo Elephant National Park, squeezing in three game drives while we were there! And yes, there are lots of elephants there, but they’re not the only animals living in the park. So, what else did I see? 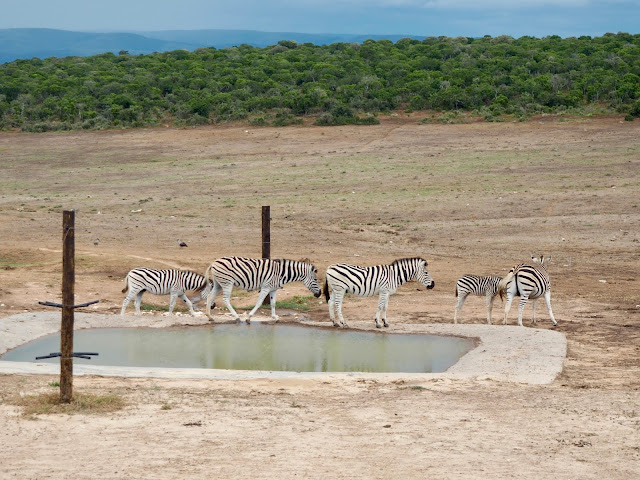 As on most of our travel days, we were up and away first thing in the morning. The drive from Chintsa to Addo wasn’t actually that long – four or five hours maybe – but we were trying to get there as quickly as possible to have time for our afternoon game drive. For the remainder of the trip, we would basically be travelling west, slowly heading towards Cape Town. Addo took us further inland again, away from the Wild Coast – I was slightly disappointed that we didn’t have more time on the coast during this trip. We’d have a few nights there again later on, but there just wasn’t enough coastal driving for me! On the way to Addo, we passed through many other nature reserves on the way, some of them signed as ‘private’. The higher mountains fell away to low, rolling hills, covered in scrubland. I was somewhat surprised, as when I hear ‘African safari’, I picture flat grassland plains, with patches of forest and lone acacia trees dotted around. This landscape was very different to what I’d been expecting, but it turns out that that’s just what it’s like in Southern Africa, and those landscapes I’d envisioned are further north – I’ll certainly have to visit more of Africa in the future anyway!

Once we arrived at Addo National Park, we quickly set up our tents – most of the other campers seemed to be in caravans, quite different to our simple tents! It was much busier here than anywhere else we’d stayed so far, and the camp restaurant and shop were definitely fancier looking too. Staying in these national parks isn’t cheap though! We hurried back on to the truck then to start the first game drive. Afternoon isn’t usually the best time for seeing animals, as they tend to seek shelter and sleep in the hottest part of the day, and are more active in the early mornings. But, any game drive at any time of day and year, carries no guarantee of seeing anything. These animals are roaming free in vast areas of land, thousands of hectares (though there is an electric fence around the perimeter), and the game drives only pass through a small portion of it, so you can never be sure of seeing anything. This did mean that on all three drives, there were plenty of long, boring stretches of driving around and not seeing anything. 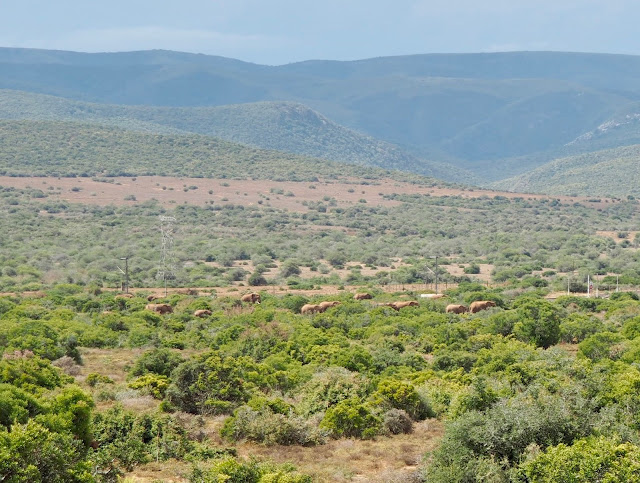 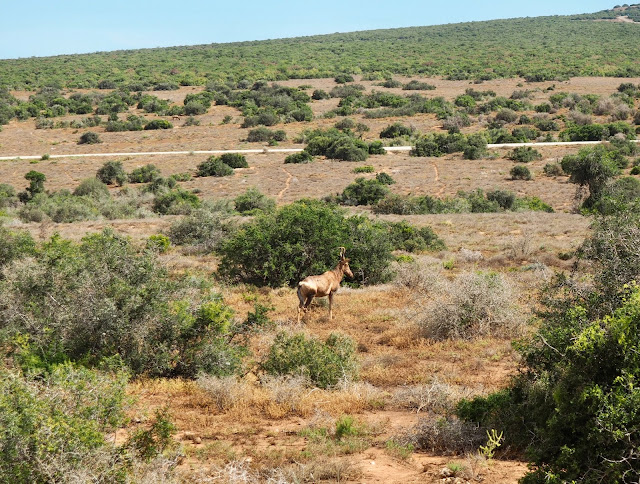 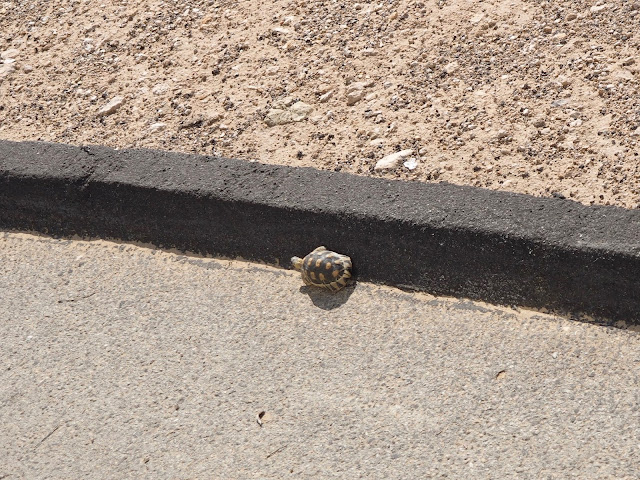 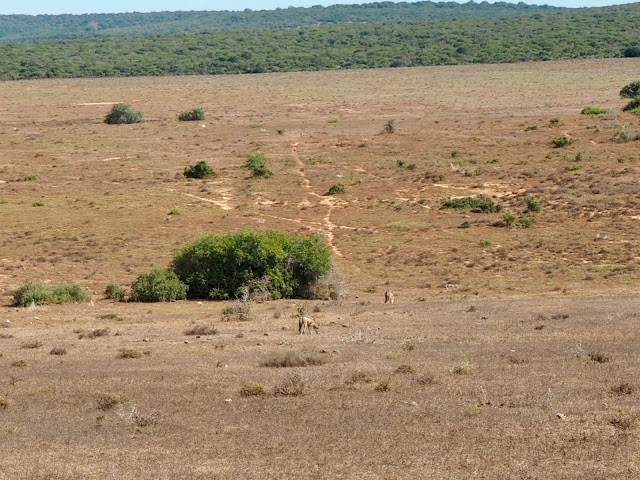 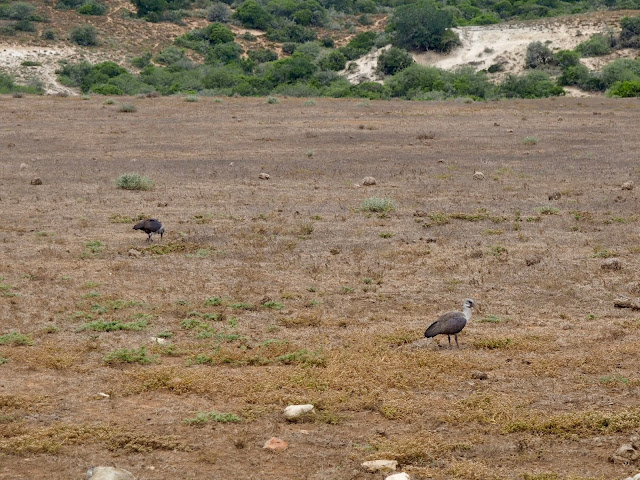 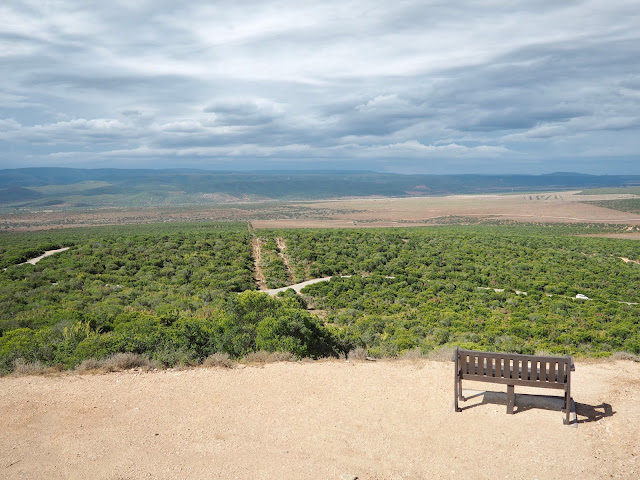 We didn’t see nothing though! Not long after entering the park, we spotted a herd of elephants ambling through the brush in the distance. My camera is pretty good, but I don’t have a long zoom lens, so it was hard for me to capture great photos of any animals so far away. Hopefully you can get an idea of it all though! From there, we were inundated with sightings of antelope, particularly kudu, which live in the park in abundance. Eventually we stopped calling for the driver to stop when we saw one, as there were plenty and we didn’t need to every single time. We saw lots of different bird species as well, but I definitely don’t know what exactly they all were! There was then a tortoise attempting to climb the curb at the side of the road, and we had to be careful not to drive over it! Meanwhile, on the other side while we were stopped, we saw the flightless dung beetle, a species only found in this region! We also stopped at a viewpoint on top of one of the larger hills, for views overlooking the park.

We saw some jackal in the distance on one of the more open areas, and a warthog ran alongside the truck at one point, but it was moving too fast to capture. We came across another elephant as well, this time much closer to the road than we’d seen earlier, a fairly large male – African elephants are much bigger than their Asian counterparts I’ve encountered before! Then we found a small herd of zebra by a watering hole as well, and lingered for quite a while watching them. We started to drive back towards the campsite by this time, having spent about 2 hours in the park, and saw a few more kudu on the way back, and another herd of zebra grazing higher up. The whole time though, our trip leader was telling us lots of facts and information about each animal we saw, which definitely helped to add to the experience. 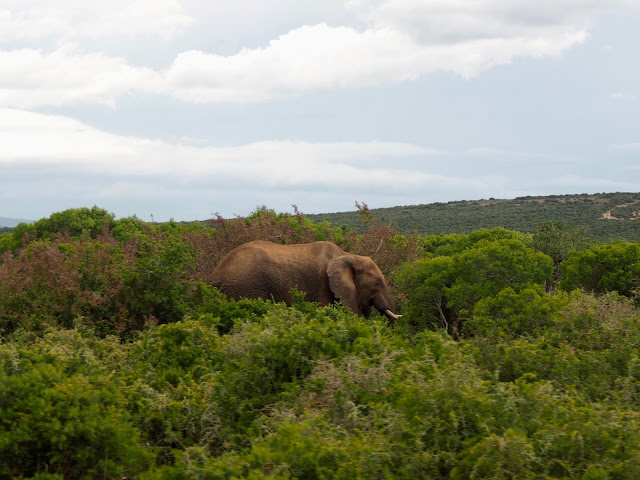 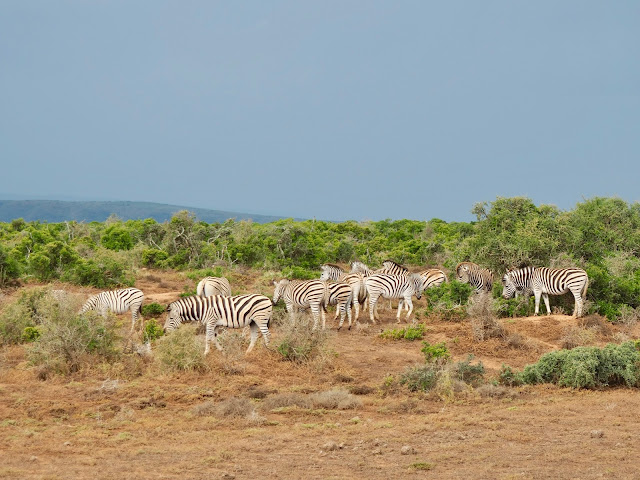 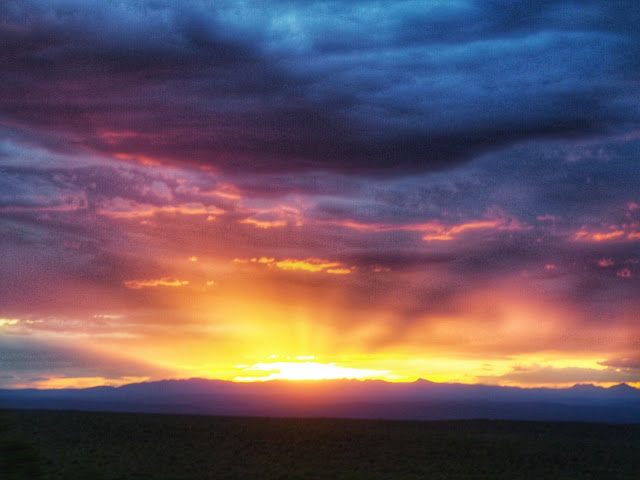 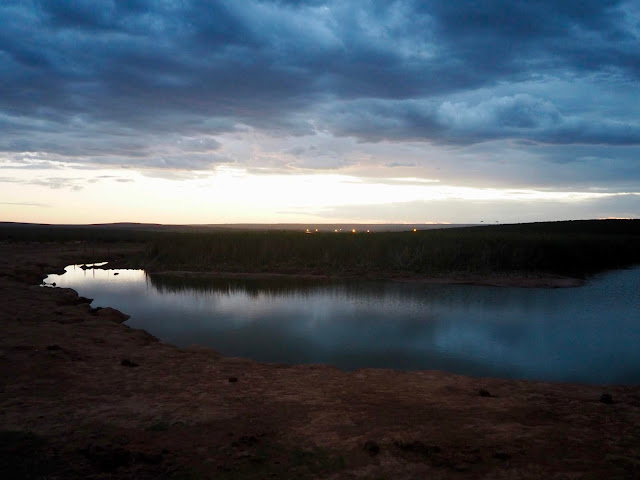 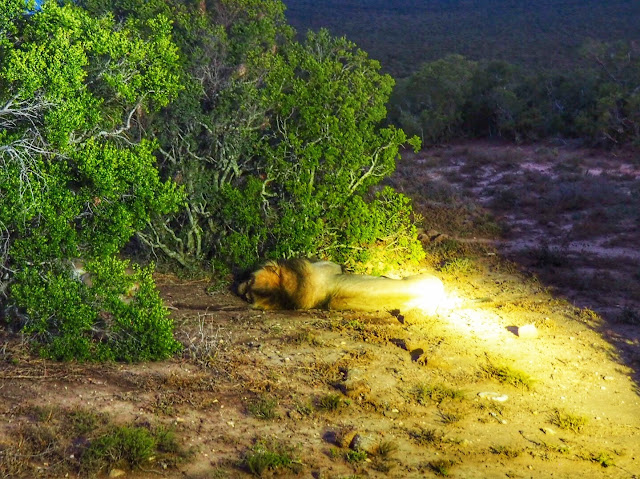 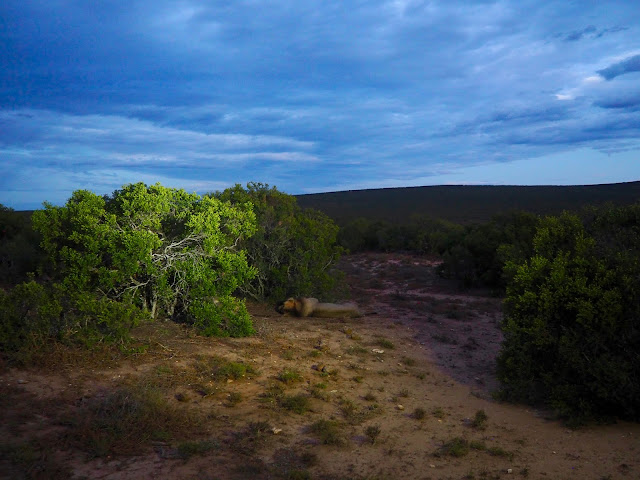 After dinner that evening, we headed out for the second game drive, a night one, to look for the more nocturnal animals. Whereas our afternoon drive was just for our group, in our truck, this one was operated by the park rangers, who are allowed into the park later than the general public, in one of their trucks instead. They know the park better than anyone else, so he had a few places in mind to look for certain animals. After dark, you can see species that are harder to find in the day, but you have a much more restricted field of vision, only a few metres on either side of the truck, with the spotlights. Our main goal was to find lions, so the first 40 minutes or so was just driving around towards the area where he thought they might be – we were also able to go onto tracks that are marked ‘no entry’ to the public. We got to see a spectacular sunset on the way though, the best of the trip so far.

Eventually, we did find a pair of male lions, asleep under some trees. They took little notice of the truck, but obviously you have to stay inside the vehicle, just in case. Mostly they just lay there, still asleep, while we took our photos. However, one decided to be a bit of a joker, and every time the driver started up the engine, he would move a little, making us stop again to see if he got up… but he never did. He did this at least three times before we eventually left them. After that, we encountered a hyena running along one of the tracks – again, too fast for a photo in the dark really! – and some more kudu. There was a lot of time spent driving without seeing anything – it was a 2 hour drive in total – but then we suddenly got everything at once, when the drive stopped beside a patch of land where there was a herd of antelope, an ostrich, and a family of porcupines, mother and two babies, running past! The driver said he hadn’t seen porcupines in a long time, so that was quite exciting, though it was too dark to get a decent photo. We didn’t see anything else after that, but we were able to admire the night sky – away from any city lights, the stars were shining brightly here, and it was spectacular really. I even spotted the Southern Cross, a constellation I don’t see up here in the northern hemisphere! 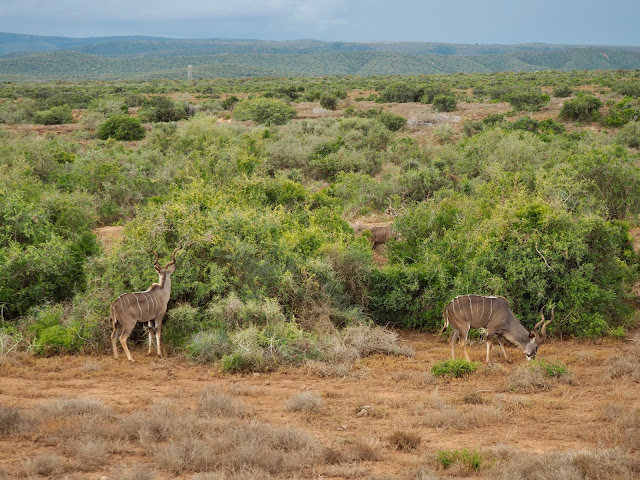 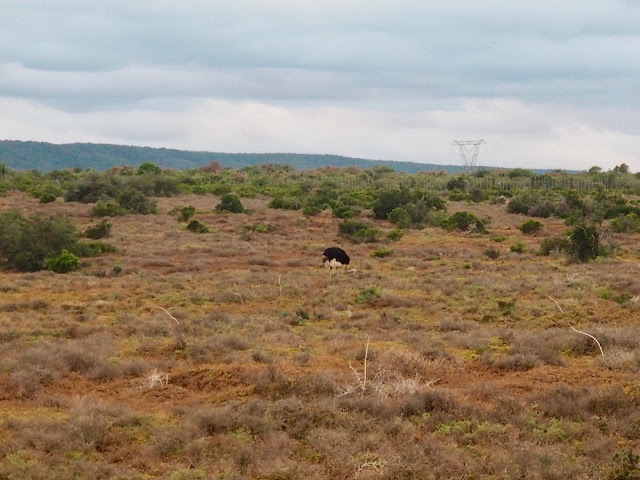 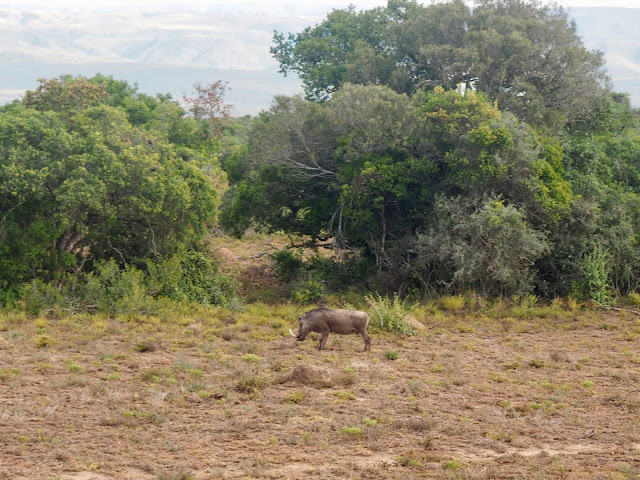 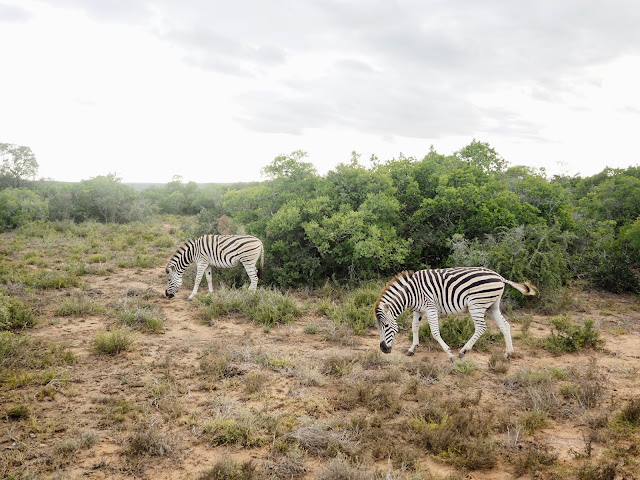 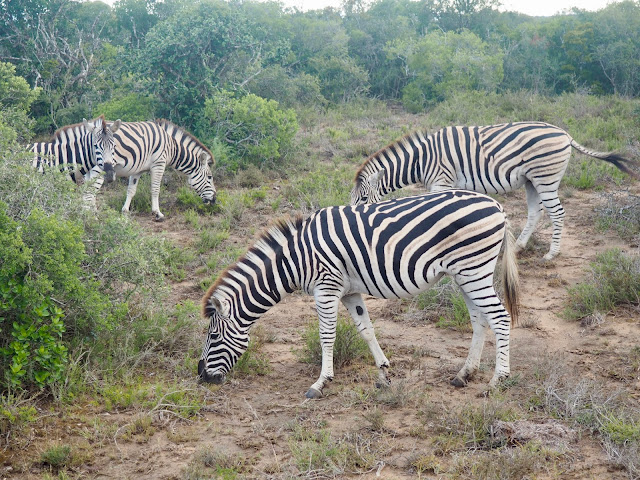 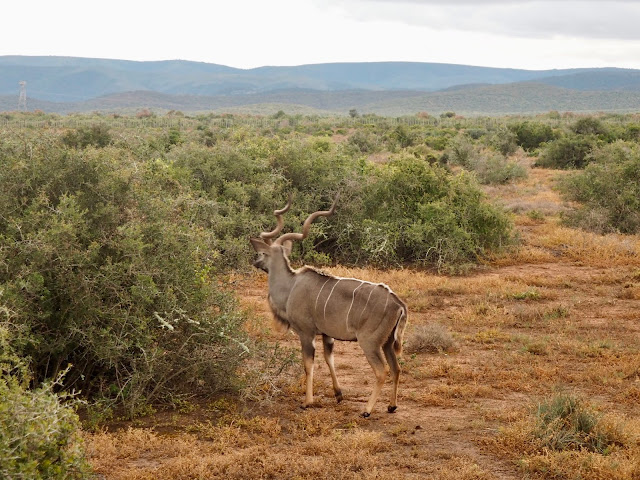 Once we returned to camp, we all headed straight to bed, as we would be up again early the next morning for our third and final game drive, starting just after 5am, when the park opens. This is a recommended time to go, as the animals are usually starting to wake up at this time, once the sun rises, and we were aiming to spend 2-3 hours in the park, which ended up being about two and a half. I think a lot of us nodded off to sleep at times during this, since it was so early, and again, there were long stretches without seeing anything. We did find a few animals though, including an ostrich, and then more antelope, zebra, jackals, warthogs, and hyena. We didn’t see anything we hadn’t already, but some of them were very close to the truck this time, particularly the hyena that came strolling up the track towards us, and the zebra grazing right by the road. That’s part and parcel of game drives though, you have to take the chance of seeing something as you never know what you’ll come across, and I would have hated to miss out on anything! I would have liked to have seen other species, like rhino, hippos, or giraffes, but that was not to be on this trip. We returned to camp by about 8am, to pack up, eat breakfast, and leave Addo to head to our next destination.

Overall, it was interesting for me to get to see all these animals out in the wild, but it was a bit frustrating to drive around so much and not see anything for long periods of time, and not see that many different species. From talking to other people in the group, who had done safaris and game drives in other African countries, there are better locations out there, so hopefully I’ll visit those one day in the future, and get to see a bit more. As I’ve explained though, there’s never any guarantees, even if you go to highly populated parks at the best times of year, so I was glad to see what we did. However, in terms of trip feedback, most of us felt this location could have been skipped in favour of spending more time on the coast and the upcoming Garden Route, since that’s what most of us had chosen this tour for. Still, lions and elephants and zebra were definitely cool to see!