Musings from the Fringe

The streets are rammed. Bodies jostling past each other, bumping elbows and shoulders and legs, slowly shuffling their way down the pavements. They squeeze past the stages and roped off corners, where the performers clamour for their attention, and past the gigantic towers, standing high above the crowds, slowly putting on weight as the month progresses, becoming wider and wider with layers of posters hastily taped in place. Coloured birds line corners of buildings, and the air is thick with flags and umbrellas, dancing their way over everyone’s heads. 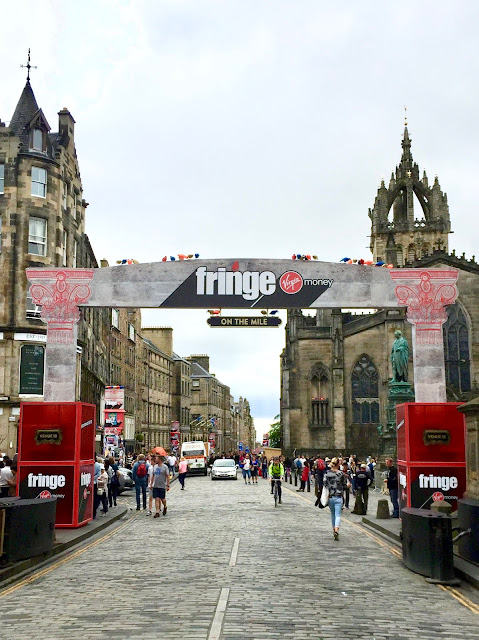 The air is filled with sounds, as all sorts of performances take place all at once. On this stage a drag queen belts out a diva level anthem, resplendent in costume and makeup. In that corner, a busker, wearing ripped jeans and hair in a ponytail, strums his guitar, reeling off the same set list of Bruno Mars and Ed Sheeran as he has for days. On another stage, a host of Victorian era costumed actors perform a ridiculously over the top comedy number. Up the street, a young man dressed all in black rolls a crystal ball up and down his arms, never letting it waver for a second. Round the corner, another stage is overrun with acrobats, flipping and jumping over each other, in time to blaring hip hop music. And over there is one of the city’s resident performers, dazzling the crowd with magic tricks and humorous repartee, having honed his craft over many years on this street.

And even more, as other performers race around the streets, desperately trying to attract their audiences for later. Flyers are brandished in all directions, and it’s scarcely possible to take more than a few steps without the next being thrust in your face. A group of girls in Grecian togas balance precariously on the bollards. Korean musicians wander the streets with their instruments, dressed in their traditional hanboks. A parody group yell ‘shame’ at their actor dressed in a nude suit, who shuffles miserably along ahead of their giant banner. A group of traffic cones runs around the street, handing out their flyers at top speed. A poster makes its way along, as if of its own accord, the person inside it totally hidden from sight.

All here to play and perform, forgetting their normal lives for a while. Who are they back home? What are their day jobs? What do they do the rest of the year?

And somewhere in the middle of the anarchy, the locals still exist. Trying desperately to continue with their daily lives, forcing their way through the crowds, dodging the never-ending stream of flyers, and clinging on tight to their sanity. Many are well practiced in their craft, heads down and earphones in, merely shaking a head at each flyer, and squeezing through any tiny gap in the crowd. Others are clearly new to the experience, at first enthralled and entertained, but then quickly becoming overwhelmed and frustrated by the whole thing.

The world comes together here, people of all nationalities and backgrounds, descending on this one corner of the planet for a month. Here, the weird and wonderful are applauded and celebrated, with each year bringing new ideas and new shows and new talents. Here, they escape from the mundanity of their everyday lives, and instead get to revel in the chaos, partying and performing, and perhaps even taking on a new persona.

For a month. And then it’s over. But the world keeps turning, and the clock keeps ticking, and life carries on. Back to normality once more.