Edinburgh is one of the most haunted cities in the world; every other street or building has tales of spirits or presences lurking in the shadows. With such a dark, gruesome, and very colourful history, it should come as no surprise that these spooky characters still roam the city streets. Especially during these winter months, where the sun only shines for about 8 hours each day, exploring the most haunted parts of the city by night can be a very eerie experience. Edinburgh’s dark and ghostly goings-on are some of my favourite stories of the city’s past – not all of them have any factual evidence to back them up, but there are plenty eyewitness accounts! – so here are 7 of the spookiest locations and stories from around the city… 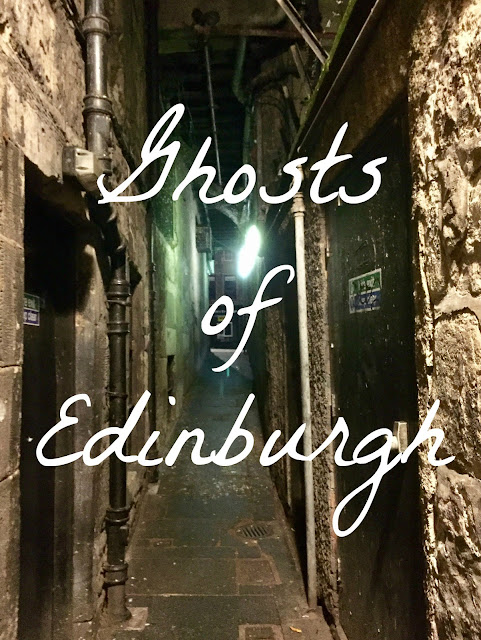 1. The Lost Piper
Edinburgh Castle is built atop an extinct volcano, with dungeons descending into the hill below it, but these chambers are far from empty these days. Several hundred years ago, some secret tunnels were found beneath the Castle, which sparked great curiosity as to where they might lead, as no one knew of them before. The entrance was too small for an adult to enter, so they sent a young boy inside with a set of bagpipes. He was instructed to play as loudly as he could as he walked the tunnels, so that they could follow his progress on ground level by listening to the pipes. They followed him down the Royal Mile, until somewhere around the Tron Kirk, when the music suddenly stopped. Rescue parties were sent to look for him, but the boy had vanished and was never seen again. Some people still claim to hear his ghostly pipes though, echoing beneath the Castle and the Mile…

2. Annie
Visitors to The Real Mary King’s Close are able to descend below the city’s surface and visit an old close which was bricked up after being decimated by the plague. It offers a historic look at how people used to live there, but you might still encounter one of its former residents. In 1992, a Japanese psychic was visiting the close, and found herself being tugged at inside one of the rooms, by a hand no one could see, and was overcome with a feeling of sickness, hunger, and cold. The psychic learned that this was Annie, a pre-teen girl who was left in this room by her family to die, when she contracted the Plague. She had also lost her doll, so the psychic bought one and left it in the room for her. Since then, countless other visitors have left their own gifts for Annie in the room, and many others have reported the same feeling of sickness and cold, or a hand tugging at them.

3. Banshee Labyrinth
This pub, located on Niddry Street, linking the Royal Mile and Cowgate, describes itself as ‘the most haunted pub in Britain’. It’s actually built inside the old underground vaults – read more on those below! – so you really do feel like you’re having a drink below the surface of the city. Its most famous spirit haunting its chambers is the eponymous banshee; a woman whose scream signals death, for those unfamiliar with such a creature. During refurbishments of the venue, some workmen heard the blood-curling scream of such a woman, and just a few hours later, one of them received a call with the news that a family member had suddenly died. There are also many stories of glasses flying off table, hurled by some invisible force!

4. Thomas Weir
Major Thomas Weir, and his sister, lived in West Bow, and he was a devout Protestant, soldier, and generally considered to be an upstanding citizen. All that changed though, when in Church one day, he suddenly stood up and proclaimed himself to be a witch; his black staff held terrible power and was given to him by the Devil, he spoke to the dead, and was carrying on an incestuous relationship with his sister, who corroborated his story. They were tried and executed – she by hanging, he by strangulation and burning – but their spirits didn’t disappear so easily. Neighbours reported lights and sound coming from their former home, and sighting of their ghosts roaming the rooms and streets, often accompanied by maniacal laughter, indicating that their diabolical revelry continued in the afterlife. The house was thought to have been demolished, but historians now claim that part of it remains on Upper Bow, and stories of sounds and sighting persist today.

5. Albert
All sorts of venues in Edinburgh have reporting of ghost sighting, from houses to hotels to pubs, and theatres are not to be excluded either. The Playhouse, Edinburgh’s most famous theatre (and a former cinema), located at the top of Leith Walk, has its own resident phantom, known as Albert. He was first sighted in the 1950s, when a police constable was investigating the cinema after a break in, and reported talking to an old man in overalls, who identified himself as Albert the doorman; but no such person worked there. No one knows for sure who he is – there are stories of him being a stage hand who died in a tragic accident, or a doorman who died alone on the premises, possibly by natural causes or a suicide. People have reported seeing him roaming the halls near a room on level 6, lights suddenly turning off, hearing doors banging or locking, or feeling a cold hand touch them on the shoulder, terrifying actors, workmen, and other staff alike.

6. The South Bridge Vaults
For a really spooky experience, descend below Edinburgh’s streets to the South Bridge Vaults, a labyrinth of tunnels and chambers hidden under the city. Edinburgh has been built on top of many times, and South Bridge was made to join the Old Town with the University buildings, with Cowgate running beneath the street. After the Bridge’s construction, it was decided the oldest resident in the area should be the first to cross; unfortunately, she died days before completion, but it was decided that she would still be the first to cross, just in her coffin instead. Locals believed that this event cursed the bridge, and many refused to use it. The vaults below were initially used as storage, but over time, they became a hotbed of crime and prostitution. People also lived in these cramped, underground rooms, mainly criminals and the poor, and many died here below the city. Allegedly, Burke & Hare, notorious murderers who sold bodies to the anatomy school, used the vaults to search for victims and store bodies. The vaults were closed off and forgotten for a time, before being rediscovered in the 1980s, and opened up for visitors. Now, there are countless stories of ghostly activity in these dark chambers, including gusts of cold air, the sound of voices, unusual shadows, and even mysterious scratches.

7. George MacKenzie
The last, and possibly the most sinister, spirit on this list is the poltergeist that haunts the Black Mausoleum in Greyfriars Kirkyard. During the 17th century, Edinburgh was rife with religious turmoil, as Covenanters rebelled agains the state approved religion, wanting to preserve their own practices. Sir George MacKenzie led a bloody persecution against them, imprisoning thousands of Covennaters in Greyfriars Kirkyard, where they were tortured and starved, and executing more than a hundred in the Grassmarket nearby. Ironically, after his own death, Mackenzie was buried in the same kirkyard, in the Black Mausloeum. In 1998, a homeless man broke into the tomb, seeking shelter, and unwittingly released the angry spirit who dwells inside. He broke into several of MacKenzie’s relatives’ coffins, until a pit opened beneath him, dropping into a hole full of the bodies of plague victims. The next day, a woman was blasted away from the tomb by a gust of cold air, and at a later date another woman was found unconscious, with bruises around her neck, as if from strangulation. Over 500 more encounters have been reported, and they are the most violent to occur in the city, including bruises, scratches, burns, and broken fingers, as well as sensations of being punched or nausea. An exorcist named Colin Grant tried to expel the poltergeist in 2000, but claimed the evil was too powerful for him, and was found dead of a heart attack just a few weeks later. The Mausoleum is locked up again now, entry forbidden, but tales of attacks by this evil, restless spirit continue, making him the most well documented poltergeist in the world – approach his tomb if you dare!