Another year over, and here we are in 2018! I was aiming to get this posted on New Year’s Eve, as I’ve done in previous years, but things got a little busy for me this weekend, as I was working long, late shifts, both pub crawl and bartending, from the 30th to the 1st, clocking in about 35 hours in 3 days. It’s been a busy year for me to say the least, with plenty of changes taking place, and plenty more countries ticked off my bucket list. I’ve moved so many times this year as well, barely staying in one place for long, which can get tiring and difficult, but has also given me so many fantastic opportunities along the way. 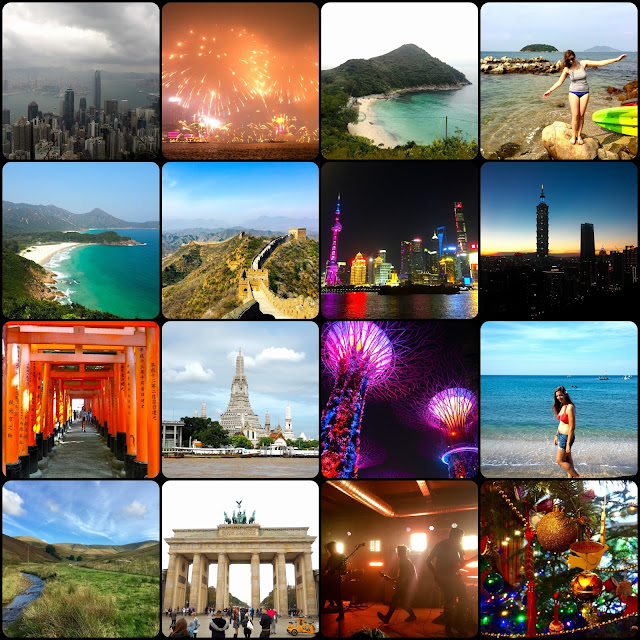 I started 2017 on a plane, as I flew back to Korea over last New Year’s Eve, to continue living and working as an ESL teacher there. My return was brief though, as while I had been at home last Christmas, I had talked my situation over with family and friends, and concluded that I was too unhappy there to stay for another 8 months. So, just a couple of weeks into the year, I flew back to Hong Kong, where I quickly was given a new kindergarten teaching position by my former agent, and found a studio flat to live in for the next 6 months – a hectic start to the year for sure!
It was definitely the right decision though, as I enjoyed those 6 months in Hong Kong far more than I would have in Korea. Hong Kong definitely feels like a second home now, and I felt so happy, grateful, and relieved when I returned. I made more new friends along the way, and was able to see even more of Hong Kong than I had the year before – there’s always another corner of it to explore! During the school holidays, I got to see the Chinese New Year celebrations in the city, and then travelled to China twice, over Easter and a long weekend, seeing famous sights like the Great Wall, and the Terracotta Army. I also reunited with Tasha, with a lot overdue trip to see her in Shanghai.
After my contract in Hong Kong ended, I embarked on my fairly epic ‘summer of travel’, to cap off my time in Asia. I spent two months visiting most of the remaining countries I hadn’t been to yet, including Taiwan, Japan, Malaysia, Singapore, and Indonesia, as well as returning to Thailand again, to explore the south. My parents and sister also joined me for a few weeks, to show my dad around Hong Kong, and have a family holiday in Phuket, before they returned home, and I carried on.
I returned home to Scotland in September; while I loved Hong Kong, and the people I met, and all the amazing adventures I had there, I never intended to stay long term, nor to be a teacher forever, so I felt the time was right to come back to the UK and figure out what my next steps will be (I’m still working on that to an extent!). I didn’t stay still for too long though, as just a few weeks after moving back, I went to Berlin to visit a friend living there, and then spent a weekend in Aberdeen visiting my sister! I was unemployed for a while when I returned, as I didn’t start looking for work until I got back. That got pretty tedious after a while, but I eventually found work, primarily for a tour company, with a second job for a hospitality staff agency to fill in other time, and have been able to move back to Edinburgh.
In terms of my goals from the start of last year, there’s been mixed results. I obviously got a lot of travelling in, but I haven’t figured out how to incorporate that in to my life long term. I know some things that make me happy, and I managed to make myself much happier in the short term when I left Korea, but again, I don’t know what a happy life looks like long term yet. I definitely did more yoga this year than last, though I’ve slipped a bit recently with being so busy working, and although I’m not sure how much healthier my eating habits were, I definitely lost some weight, especially over the summer. I have been reading more again, and I was able to start playing piano again once I moved home, but I probably do still spend too much time online!
And as for where I am right now, I’m still figuring things out. 2017 was a fantastic year for me in terms of travel, and I don’t want that to stop just because I’m now back in the UK, however it’s unlikely I’ll be going to quite as many places this coming year. It’s been a weird couple of months at the end of the year, as I’ve been forced to consider my future plans again, in terms of what I want to do work-wise, and if I’m ready to settle and start thinking long term yet. The short answer to that last one is probably not, so who knows what next year will hold? It’s been seven years since I named this blog, but it’s as apt as ever – I’m still just muddling through life!
The images are some of my highlights from the year, and some have blog posts associated with them, linked below. Numbers are left to right, top to bottom.
1. Change | Leaving Korea and Returning to Hong Kong
2. Celebrating Chinese New Year
3. Hiking Sharp Island
4. Kayaking in Sai Kung
5. Hiking to Tai Long Wan
6. Beijing Highlights | China
7. Shanghai Highlights, Part 1 | China
8. Taipei City | Taiwan Part 1
9. Kyoto | Japan Part 1
10. Bangkok | Thailand Part 3
11. Singapore in 1 Day
12. Pemuteran | Bali Part 1
13. Next Steps | Returning Home
14. Best of Berlin | Part 1
15. Deaf Havana | The Garage, Aberdeen
16. Merry Christmas