Charlotte Life, Travel
It was my birthday, hooray! Well, is it still a hooray? When you’re a kid, getting older is really exciting somehow, since you get presents and cake and maybe a party, and as you get older you get to do more things. Now as an adult, I still get presents and sometimes cake, but I can already do pretty much most things I want to. Now my birthday just means I’m getting old, haha! Let’s be real though, twenty-three is still very young in the grand scheme of things, but I do feel like it sounds a bit more grown-up than twenty-one or two did. The older I get, the more I feel like I should know what I’m doing and be less likely to fuck up – which is not true at all! Overall, I don’t feel different at all to twenty-two, and I doubt much will change between this year and last, at least in terms of how I act and live my life at this age! Anyways, on to how I spent my actual birthday… at Ocean Park of course! 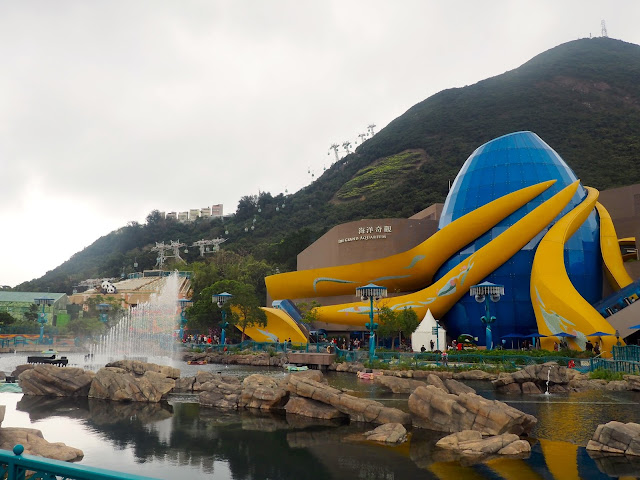 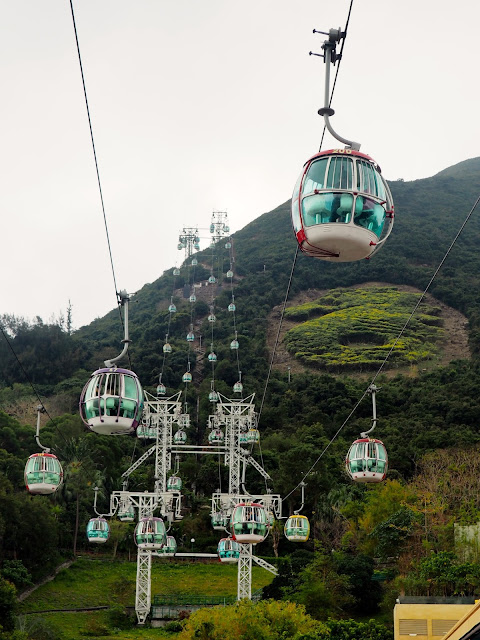 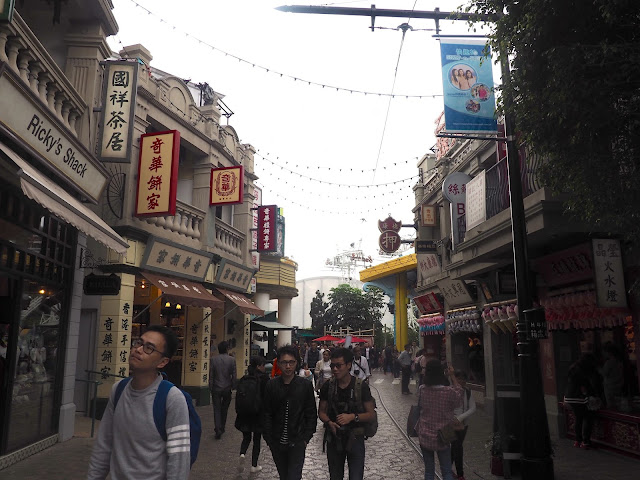 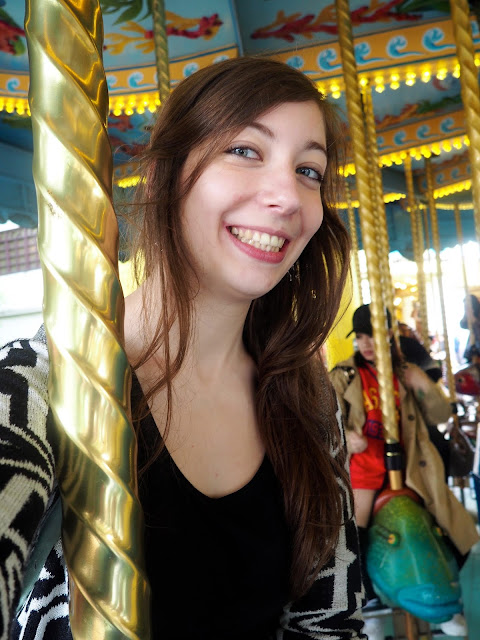 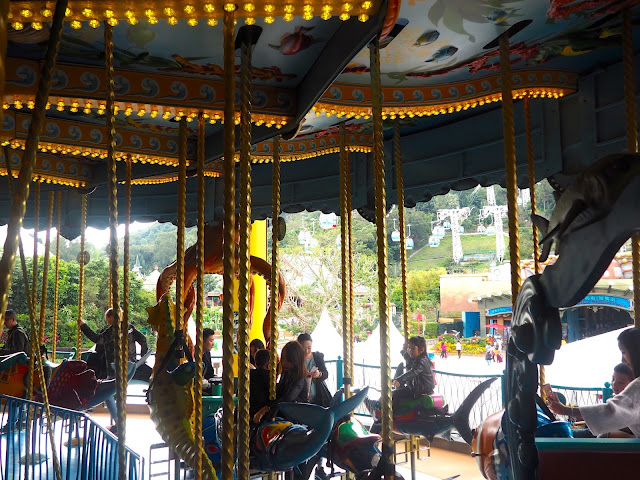 Anyone who was reading this blog last year knows that I got the Ocean Park annual pass, and went three times total – check out rounds one, two and three here! My pass has now expired, but you get free entrance on your birthday, and since my landed on a Saturday this year – AND a Saturday I didn’t have to work, what luck! – of course I had to make the most of this (especially since the prices have gone up since last year). We headed over in the early afternoon, after a nice long lie in bed, and I got to take the new MTR line there, which was still under construction last year. We started off in the lower ‘Aqua City’ area and visited the Old Hong Kong section. Having been so many times before, I’ve seen pretty much everything already, but Sandra (the friend who came along) was there for her first time. She likes the big rides, but I’m a wuss who’s scared of heights, so I insisted on some smaller ones together, starting with the carousel. It’s slow, and doesn’t last that long, but I just think carousels are so pretty, and such a quintessential fairground ride and Ocean Park is definitely an excuse to act like a kid for the day! 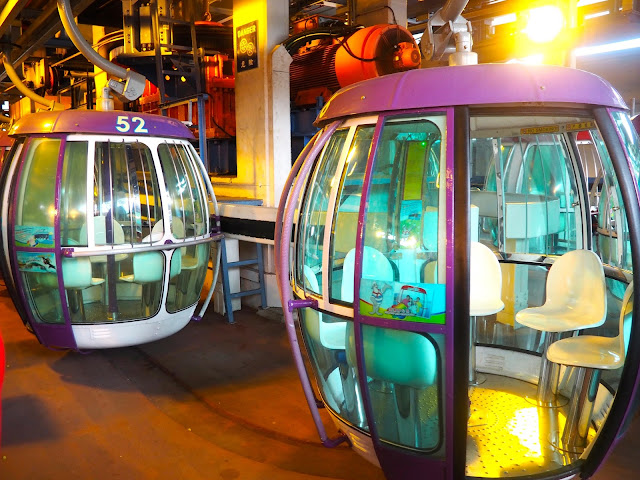 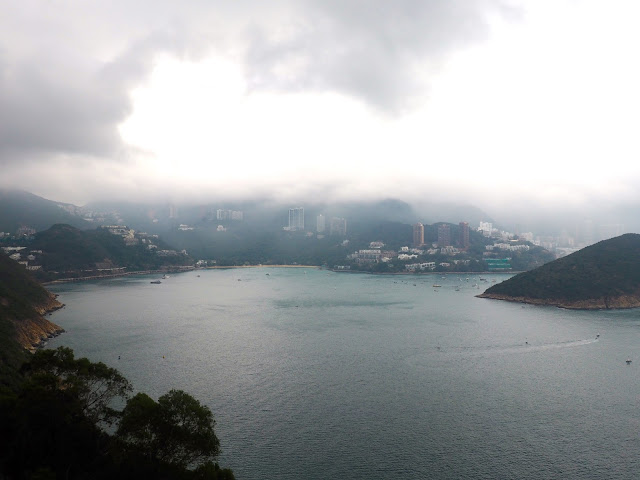 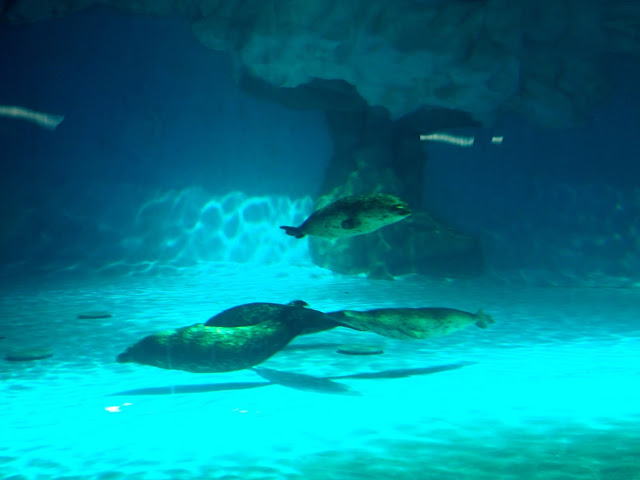 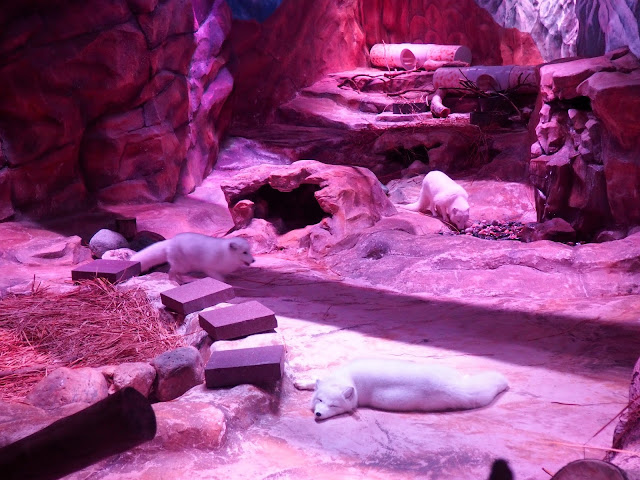 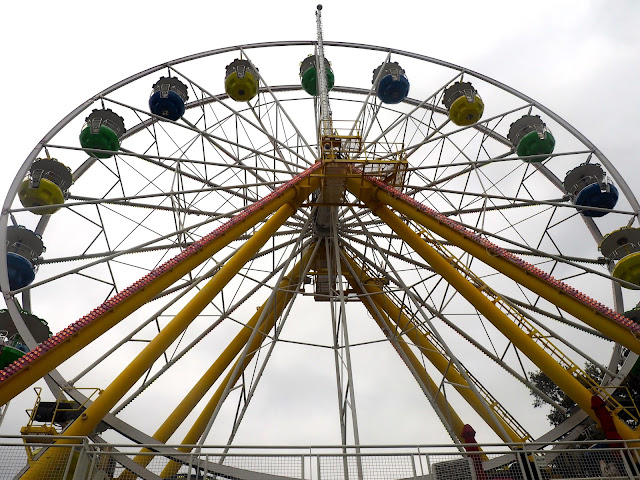 Next, we headed up the mountain. Every other time I’ve been, I’ve taken the train up, since it’s faster and as we’ve said, I don’t like heights. Sandra wanted to try the cable car though, so I braved it this time. It wasn’t awful, but I definitely had a tight grip on that pole! It took way longer than I’d realised, and there was a good portion where I had to look out one side and not the other, where the height was more apparent. We went to Thrill Mountain first, where I waited while Sandra tried the Hair Raiser, before dragging her to the Rev Booster, one of my favourite rides here. It’s just cars whizzing around in a circle, the speed forcing you into the outer edge of the car, but I laugh so hard every time I go on it! We had some lunch there too, after the rides of course – a nice healthy hot dog and fried meal, because you kind of have to eat like that at a theme park, right? The other Thrill Mountain rides aren’t for me at all, but I do like it’s fairground theme, being the most reminiscent of the fairground (or ‘shows’ as we call it) I grew up around. We stopped off at the polar animals nearby too. I was disappointed not to see the walrus this time, but the seals were frolicking around, and the Arctic foxes were the most active I’ve seen them here, running all over their enclosure. 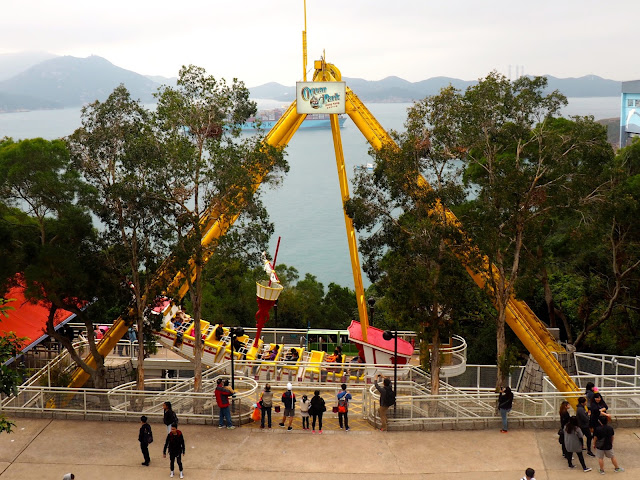 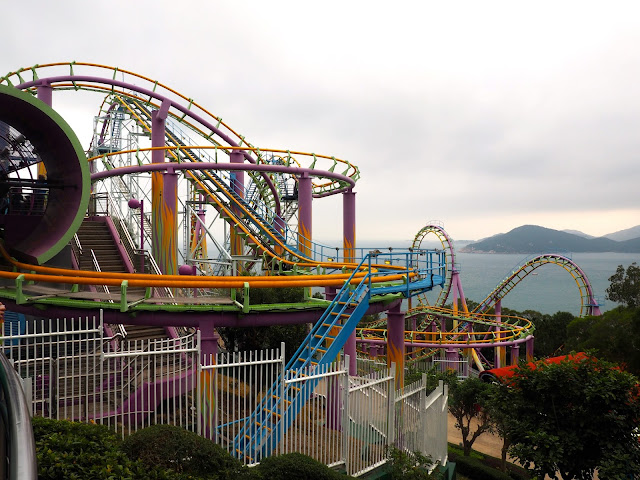 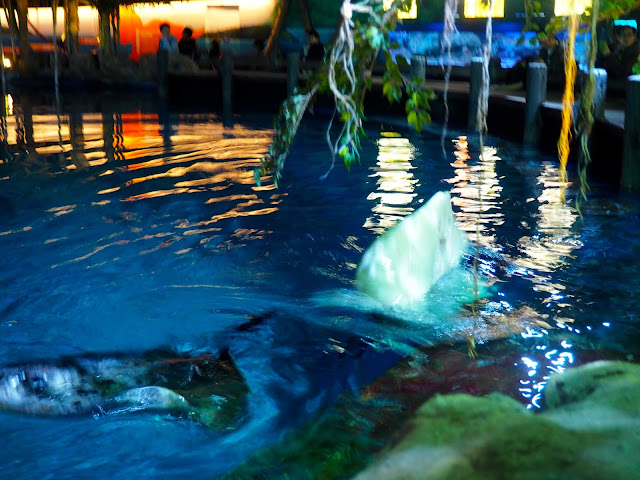 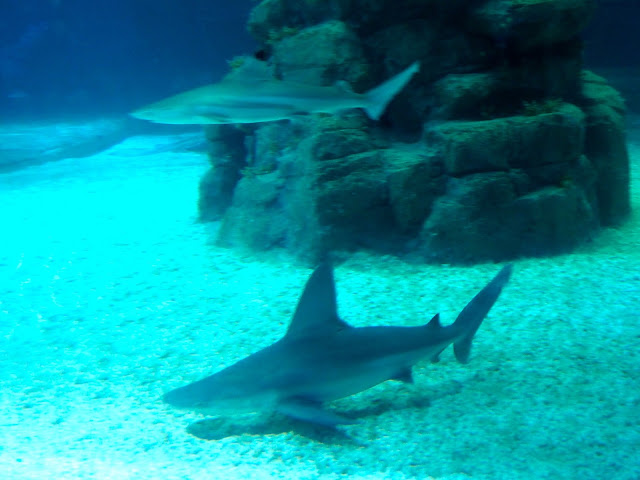 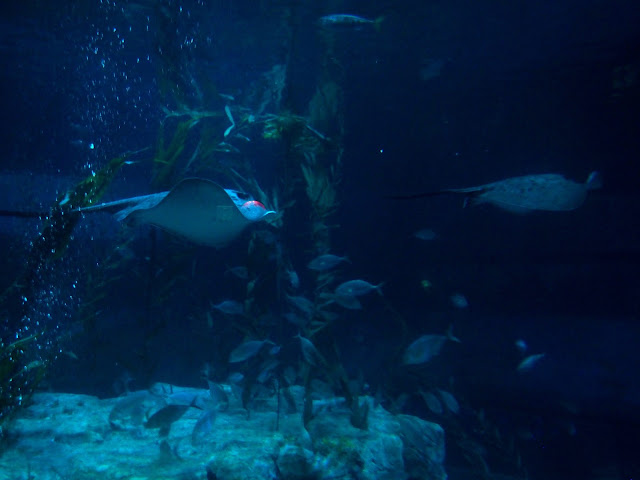 We went down to Adventure Land next, as Sandra was itching to get on the big rides. I sent her off to The Dragon, the biggest rollercoaster there I think, and then The Abyss, one of those tower drop rides – she said the latter was great, the former less impressive. In the meantime, I went for another look around Shark Mystique, since she doesn’t like sharks and rays much, and I think they’re so cool. One of the rays was popping up out the top of the tank, as if to say hello, which was a fun start. I definitely still have mixed feelings about zoos and animal exhibits and such, and am becoming less keen on them as I get older, but I still can’t help enjoying seeing these amazing animals. But having snorkelled with rays and nurse sharks in the wild, I have to say that those sorts of experiences are a million times better than places like this. Anyway, I met up with Sandra again, and decided I was feeling brave enough to try another new ride. I love things that spin of go fast, but I hate heights and going upside down. The Eagle was my next choice then – yes, it goes up in the air, but it didn’t look too high, and the spinning cars were something I thought I might enjoy. I had mixed feelings about it – the spinning motion was fine, though not fast enough to be really fun, but I had to close my eyes as soon as we started to rise. If nothing else, the cable car and this ride confirmed that my fear of heights is going nowhere anytime soon! 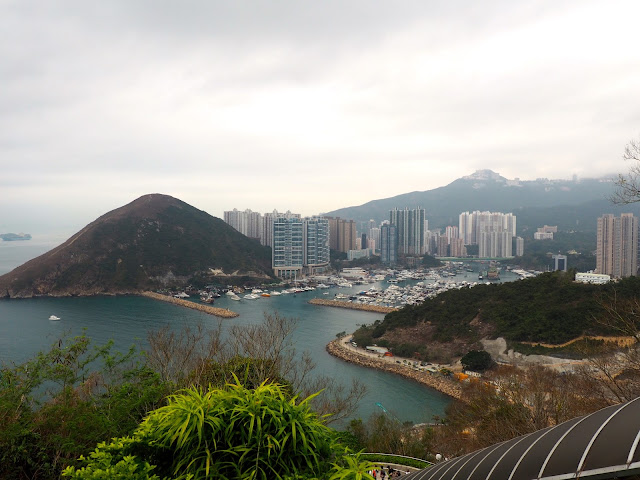 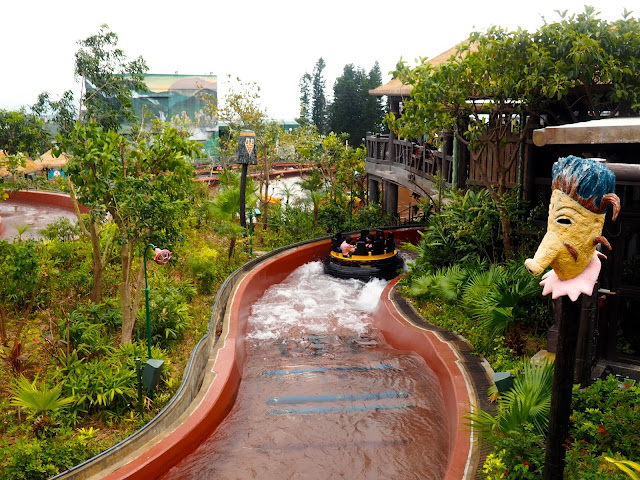 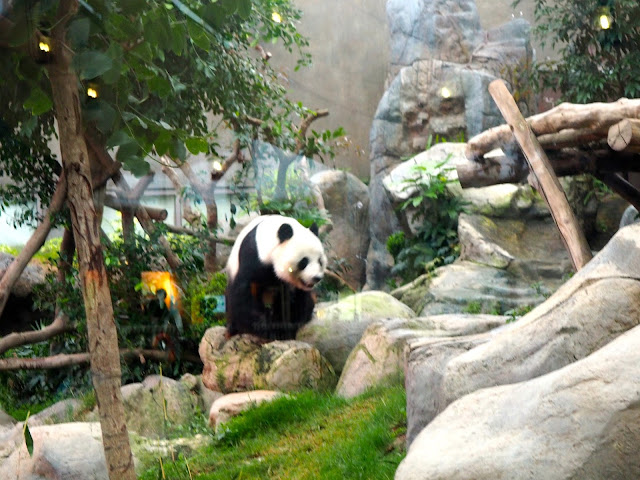 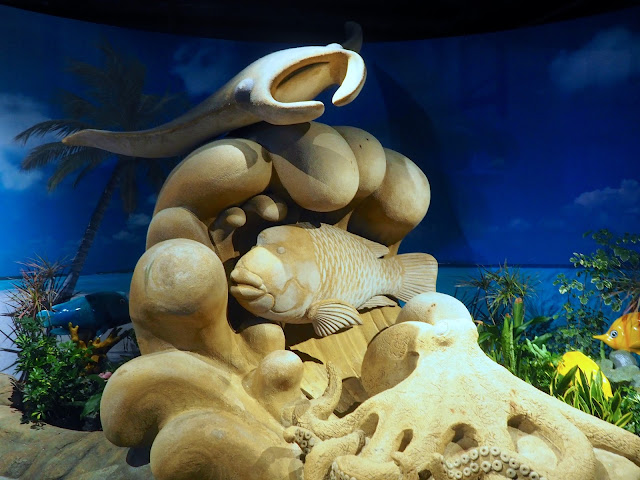 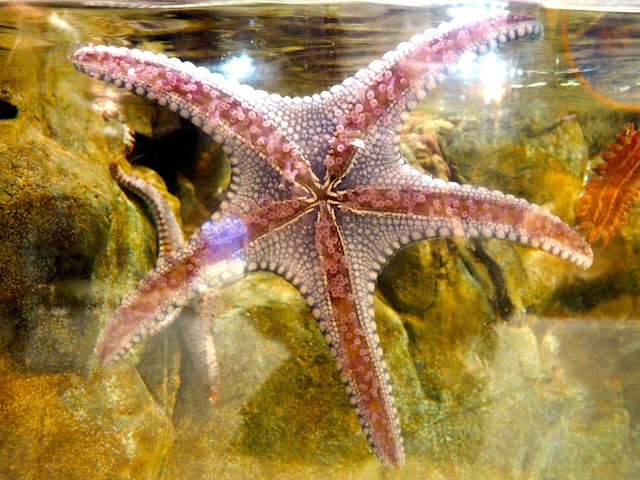 Before heading back down the mountain, we jumped on a couple more rides – first The Rapids, which is slow (I would like more actual rapids) but really fun to shriek your way around as you get soaked with water. It’s less fun when you have to walk around in damp clothes after! Then we hopped on the Arctic Blast, to try to dry off, a much smaller rollercoaster, which is pretty boring to people who like the big ones, but is the only coaster in the park I can actually handle – yes, I’m a wuss, we’ve established this! We took the train back down after, and headed to the panda exhibit. I’ve been there every time I’ve visited Ocean Park, but I do love pandas! One of them was feeling pretty active too, and I got some clips of her roaming around – the other was lounging on a log, looking so chilled out! We went to the Grand Aquarium next, which I’ve only been in once before, but I really enjoy, as you follow so many twisting halls full of different creatures – I think it’s incredible just how many different species exist in the oceans! The tunnel through the large tank is one of my favourites, as the rock formations make it look like you’re in a cave looking up through the ocean – and when one of the rays stopped on the glass, with its smiling face on its belly (not actually their face, I know) it just looked so cute! We were pretty exhausted by this time of the day, having done a hell of a lot of walking, so we took a seat by the fountain for a while, to wait for Symbio, the park’s closing show. I’ve seen it before, and took plenty of photos and videos that time, but it’s still pretty spectacular, with the combination of water, fire, coloured lights and fireworks on the go – watching Sandra watch it was also highly entertaining! 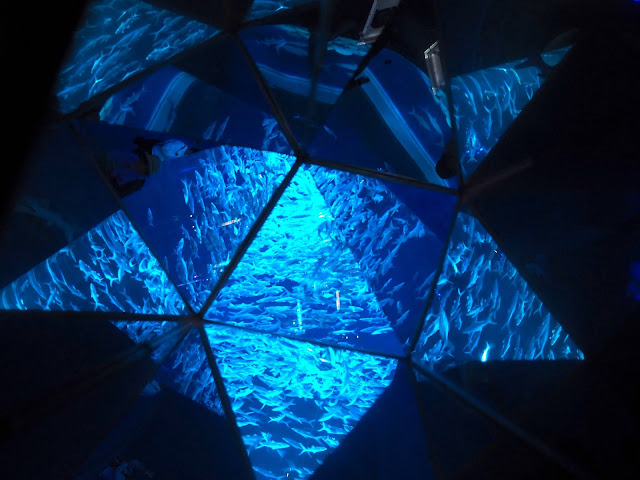 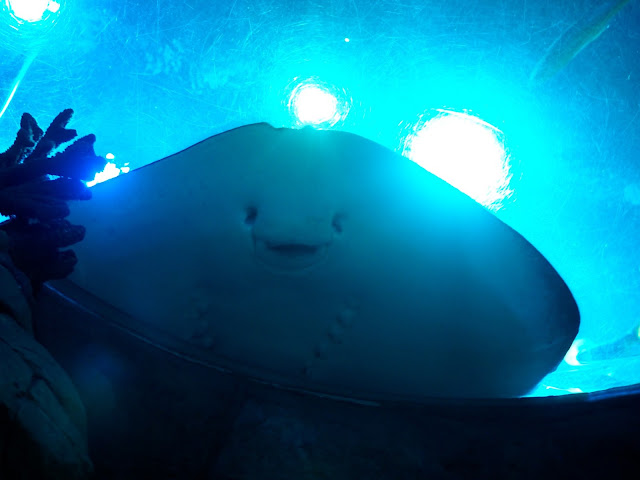 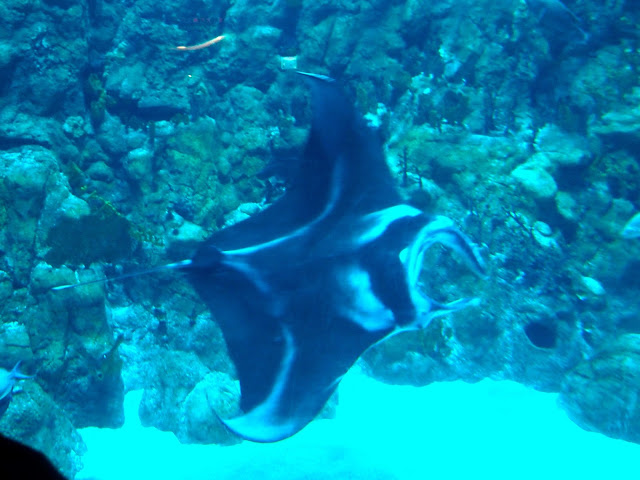 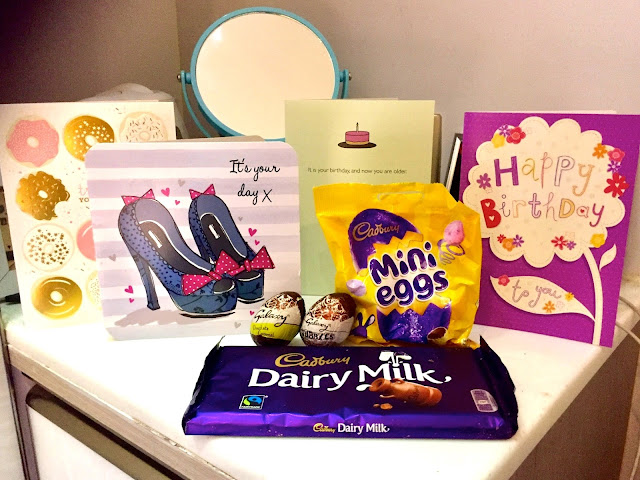 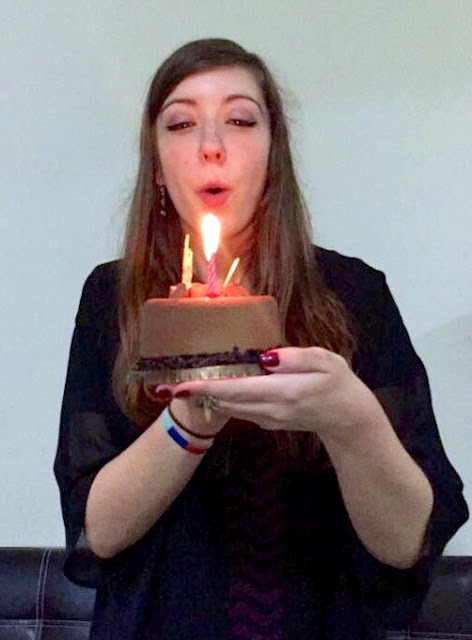 My day wasn’t over yet though! We headed home from the park, to get ready for the evening. I had a package from home waiting for me back at my apartment – perfect timing from the postal system there, since I wasn’t expecting it until a few days later! It’s so easy to send people birthday messages online nowadays, especially for someone like me who lives so far away! But I really enjoy and appreciate when I get actual cards in the post, and I like to send them myself too (Moonpig is my normal chocie!). Plus, I got lots of chocolates that I can’t get over here, so that was great, thank you! After getting ready I went to Sandra and Ismare’s for food and pre-drinks, and while I was on the phone checking in with Ismare, Sandra brought out this cake, which was a lovely surprise – and I’m currently munching on what’s left while writing this! We headed out to Central for the evening, where I insisted on finding somewhere to watch the rugby first – it was Scotland vs England, and after we beat Ireland and Wales already this tournament, I was feeling optimistic. It was not to be though, and I was pretty sour by the end of the match, but some drinks and dancing turned me around again. We spent a little while in LKF, before winding up – where else? – in Dusk till Dawn until the wee hours of the morning. And then Sunday was spent in bed!