Oh 2018, what will you have in store for me? As I’ve said in previous years, I don’t believe in starting a million resolutions at the beginning of the year that will suddenly transform you into another person, as that’s just not feasible. We don’t magically change overnight, however, you can commit to a few changes at any time of year, so why not New Year too? Generally though, this is a time for reflection for me; I’ve already taken stock of last year, so now I’m thinking ahead to what my plans are for this year. 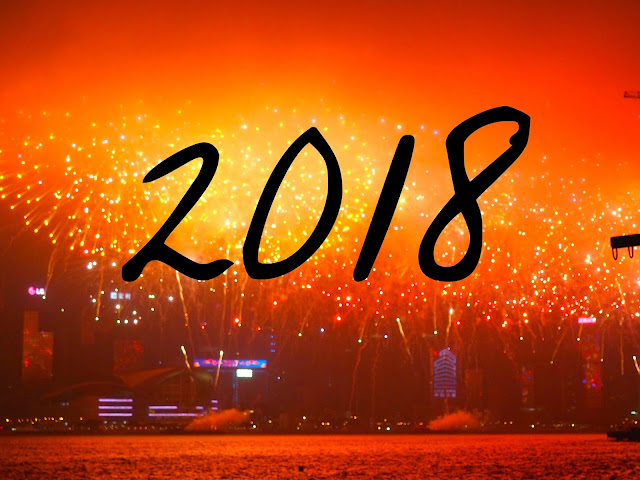 Some people say that the way you spend your New Year can reflect how the rest of the year will go. I spent it working! I was bartending on the 31st, and again all day on the 1st, as well as leading the pub crawl on the 30th and the 1st. So work and alcohol then I guess! That does sound kind of accurate though, as work is the only plans I have so far for this year. Being back in the UK, and no longer being on an academic year length contract, as when I was teaching, means my plans are more open-ended at the moment too. I’ve been working a lot lately, and I do think that’s how things will continue, as I’m trying to save money, and am about to have more expenses again when I move into a new flat later this week. The work I’m doing is not a long-term career, as I’m reluctant to start looking for ‘serious’ work, when I don’t know what kind of work I want that to be. I’ve written about this before, about how unclear my future is, and how I do feel lost sometimes when I think about it. I don’t know what work I want to do, I don’t know when I want to start settling more or if I want to travel again, and I don’t know how or where I’d travel to. It’s all very up in the air!

So I guess that’s another part of 2018, is continuing trying to figure that out, as I’ve been trying to do in previous years too. I’m certainly staying put until the end of August, as that’s how long this flat is for. I’m not sure yet if I’m saving this money in the hopes of maybe buying a flat, as I definitely don’t want to keep moving and renting forever, or whether it will go towards travelling again. Currently I’m leaning towards the latter, and perhaps this time next year I’ll head off again for another year or two, as I don’t think my adventures are anywhere near over yet! But as well as trying to figure this stuff out, I also want to stop stressing about it so much. Yes, I want to figure life out more eventually, certainly in terms of a stable enough career, and owning a home one day, but that’s still quite a way off. I tend to panic about being nowhere close to that stuff sometimes, but then I also panic at the thought of not going off on more crazy adventures, and these feelings of being lost and confusion can be quite stressful, even if I seem blasé about it all to others, when I talk about how I ‘just muddle through’. So I want to try to be more accepting of where I am in life just now, stop comparing where I’m at to other people’s lives, be grateful for the parts that I have figured out, and be calmer about living in the moment and trusting that things will work out at some point – probably not this year, but some point!

That’s the bigger picture, slightly scary life stuff out the way! As for simpler, smaller goals, I think last year’s went ok, so I do want to continue with those habits – yoga a bit more often, reading a few more books, and getting back into some other hobbies. I won’t have a piano to play again in this new flat, but I was considering a keyboard – I hate them compared to real pianos, but it would be better than nothing. I keep meaning to start sketching again too, and I’d also like to try getting back into more fiction writing again. And although I did more yoga, and seemed to have lost some weight last year, I do want to be more aware of what I’m eating – more fruit and veg, and less late-night snacks would be a good start, though the latter is easier said than done when I’m always hungry late at night after finishing the pub crawl!

I feel like every year when I write this post, I talk about the fact that my future lacks a firm plan of any sort, and every year I say I’m going to try to figure that out. But maybe that’s the truth of the matter, that I’ll never have that fully figured out – and maybe no one really does! – as no matter how we try to plan our future, we never know if it will work out until it does. And that’s a part of life that’s both terrifying, and kind of exciting. Sure, I get stressed about it sometimes, but I think I’d also be bored out of my mind if I wound up settled and doing the same thing for the next fifty years or so. Life is a journey, and all of us are constantly changing and growing as people – whether as the result of New Year’s resolutions or not! Our plans, our personalities, our situations, our relationships, our hopes, and our wants – none of these stay the same forever. So no, I don’t know where my life will be by the end of this year. But that’s ok. As long as I am moving forward, trying my best, making plans (even if only short term or not concrete yet), and finding ways to be happy, then that will do for now!

Phew, did that get a bit rambling near the end? I definitely go back and forth a lot about this wanting to have plans, but also not wanting to, and not knowing what they’d be any! Anyone else in the same boat? Anyways, happy new year, and let me know your plans, goals, or any other thoughts about going in to the new year!