Ok, I know what you’re thinking, if you’ve been reading my previous posts – I travelled from Phuket to Bangkok, to then travel south again just a couple of days later. Sounds daft, I know, but I kind of think of these as two different trips (inside my big one); one with family, the other with the group tour. And that’s just the route that the tour happens to take. Anyways, Khao Sok National Park isn’t an area of Thailand I knew much about before, but it definitely proved to be worth visiting. After the overnight train, we arrived early at our hotel, whose rooms were a group of bungalows in the forest on the edge of the national park. The ‘town’ was little more than a collection of other hotels, restaurants, and minimarts, but after the noise and bustle of Bangkok, I certainly wasn’t complaining! The National Park entrance wasn’t far from the hotel, but since we would be entering during our day trip the following day, I didn’t bother paying to enter twice. 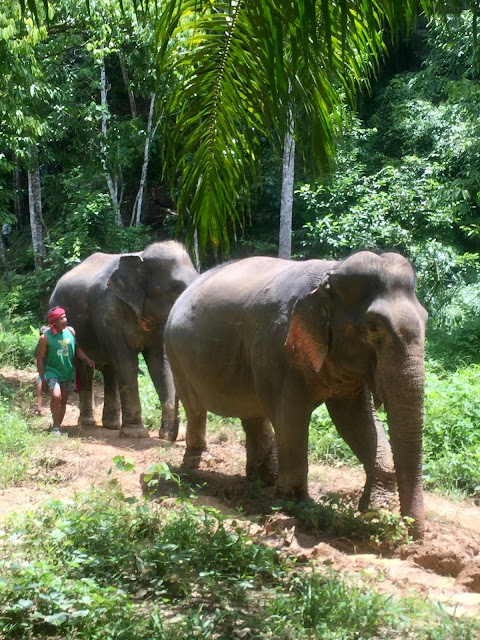 After a morning nap, since no one slept very well on the train, we got ready for our first activity – a visit to an elephant sanctuary. This was actually a surprise to me, as I didn’t know there were any in this area. The majority are in the north of Thailand, but it seems that more are appearing in the south now. I already spent time with elephants when I was in Chiang Mai last year, but this was a relatively inexpensive experience, only lasting about an hour and a half, and all the others were excited to do it. Elephants are beautiful, intelligent creatures too, so I was quite happy to get to spend time with them again. The sanctuary was only a short ride from the hotel, and there were nine of us in total, interacting with two female elephants. First, we fed them sugar cane, mostly to befriend them, which they eagerly snatch out your hands with their trunks. This was also a chance to touch and pet them, for both us and them to get used to being around each other. Then we walked with them down to the mud pool, where we all jumped in and helped to rub the mud all over them. The mud cools them down, and they seemed quite eager to splash around in the pool too. We, of course, got covered in it ourselves too, though it didn’t turn into the mud fight (nor the water fight later) that broke out with the group I did it with last year. Then we washed them off in the river, and got very up close when one of them waded past me, forcing me back into a tree to avoid her! The guides here got the elephants to spray mud and water out their trunks – an exciting thing to witness, but I know they wouldn’t do this of their own accord, and are being made to, but we were assured that there is no cruelty at this centre in order to do so. We walked back through the forest with them, watching as they stopped to snack on just about any plant that they could – elephants spend most of their days eating, since they’re so massive! We gave them some more sugar cane treats at the end, and were able to take photos with them, before they were left to return to grazing and roaming in the shade of the trees. 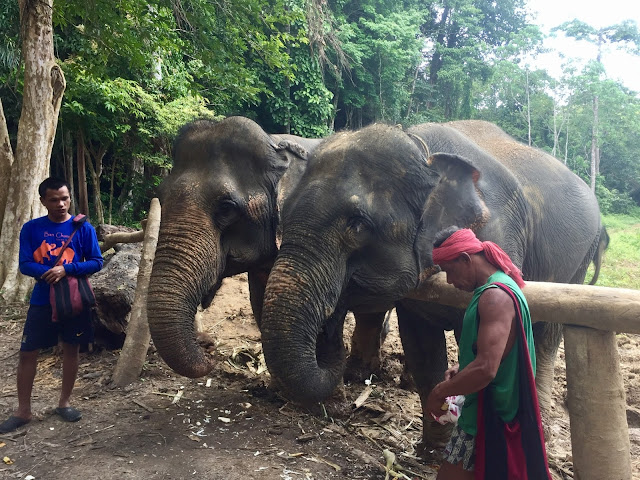 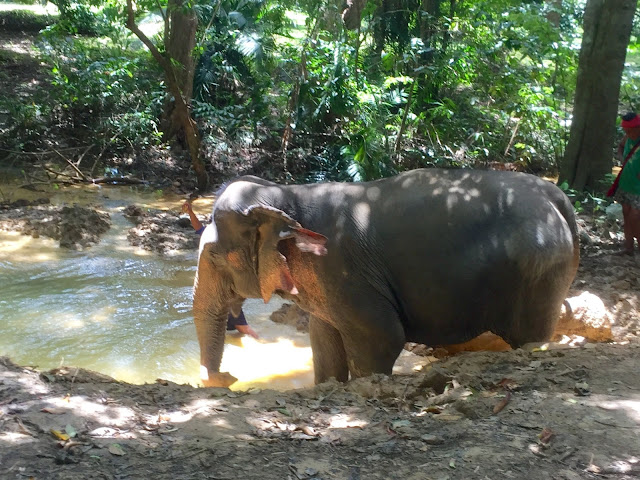 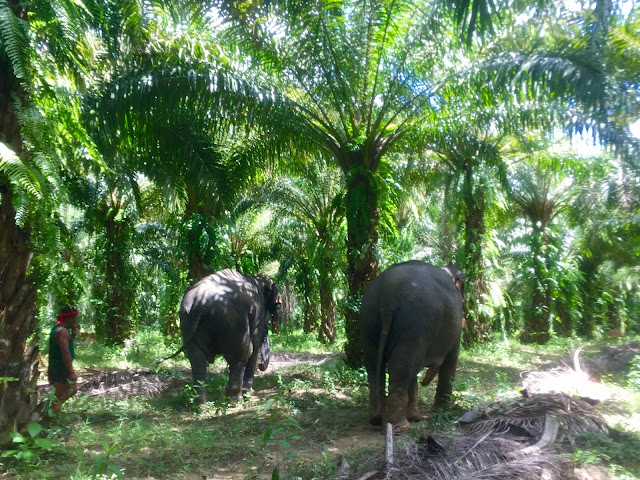 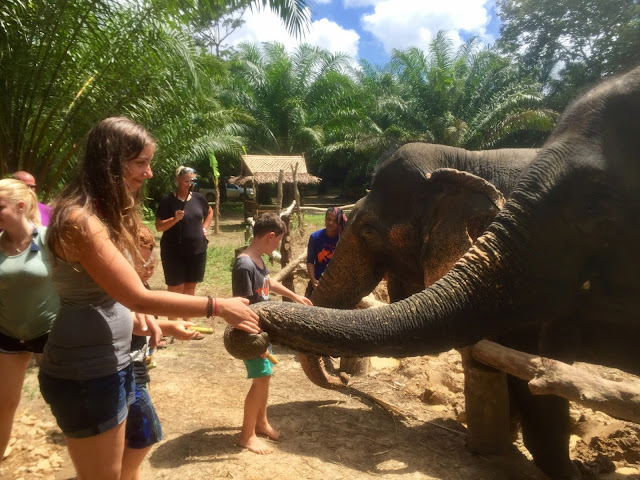 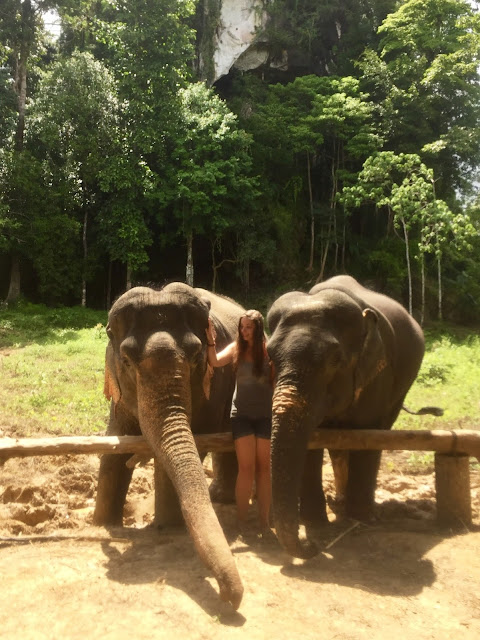 We still had plenty of time left that afternoon, and a quick enquiry with our hotel revealed that there was another river tubing outing still to happen later in the day, so we quickly signed up to join it. We had just enough time to grab some food in between these activities, before heading to the river. The waterproof phone case I got from my sister last week proved very useful that day! The staff led us down to the river near the hotel, with the tubes, and took our towels and dry clothes, which they would bring to us at the finish point. There were about half a dozen guides with us, to help guide us through the river’s currents, and make sure no one got stuck or hurt. It almost meant we could relax more in them, and not have to keep adjusting course, though we did have to paddle from time to time to stay together and on the right currents. We spent about 45 minutes on the river, passing by other people swimming outside their hotels, and a good amount of wildlife, especially monkeys perched on the rocky cliffs around river bends. There were quite a few faster currents of water along the way, making for a more exciting journey than I’d perhaps expected! It was still very relaxed overall, drifting through the jungle and admiring the scenery, and the water wasn’t all that cold either. There were one or two moments when I was in danger of drifting too close to the edge, despite my paddling efforts, but the guides were quick to grab on to anyone in such a predicament. We were met at the finish point by trucks, with our dry clothes, and water provided, which then whisked us back to the hotel. We spent the evening at the hotel restaurant, eating, drinking, and playing games, before turning in before our whole day trip the next morning. 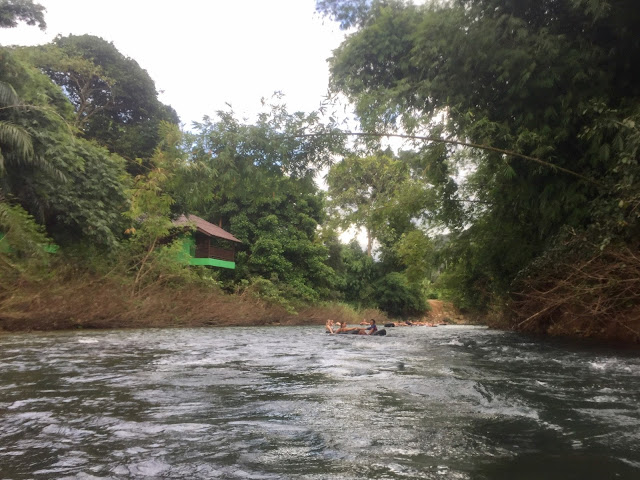 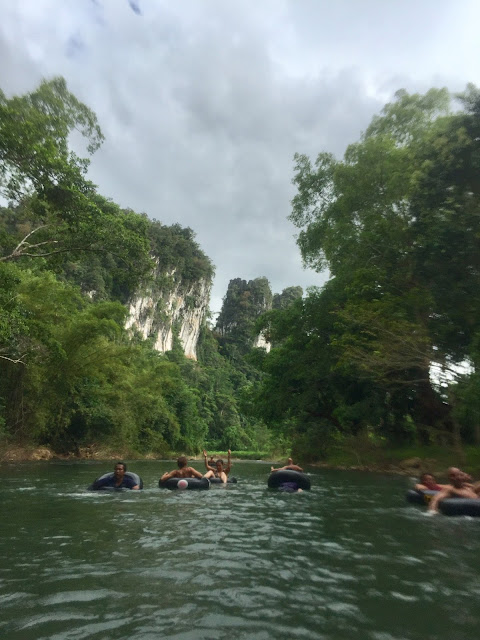 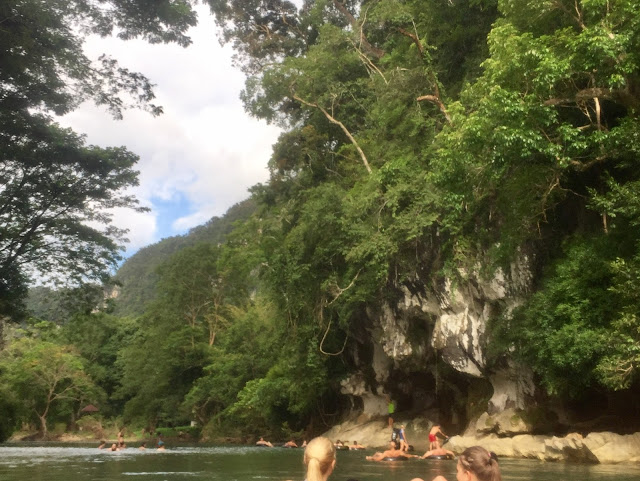 The next day’s trip was an included activity on the tour, a full day outing to Cheow Lan Lake, also known as Khao Sok Lake. It’s actually a reservoir, created about 40 years ago when the area was evacuated of habitants and flooded, and the dam was built. We were taking a longtail boat for our outing, which is definitely one of my preferred modes of transport here, since it’s what you always see in the postcards! Flowers or ribbons hanging from the front are in tribute to river or sea goddesses, to provide safe journeys. We whizzed across the lake, admiring the vast rocks towering around us, their limestone colouring the waters bright blue. The boat pulled us round to a specific formation, of three stones, which seemed smaller than many of the others. We didn’t quite get why this was a particular highlight, but apparently it resembles a similar formation in China, so many people like to see the Thai version of it. We spent about an hour travelling up the lake in this way, until we reached one of the floating villages. It’s actually a hotel, not a village where people live full time, with a restaurant in the middle and a line of cabins stretching in either direction. We had some time here to swim or to kayak as we pleased, or just sit on an available bench outside an empty cabin and relax for a while, the latter of which was what I did. The water was very deep, and a little cold too, though that wasn’t stopping some others leaping from the diving boards! We had about an hour to relax like this, before we were provided with lunch at the restaurant there. 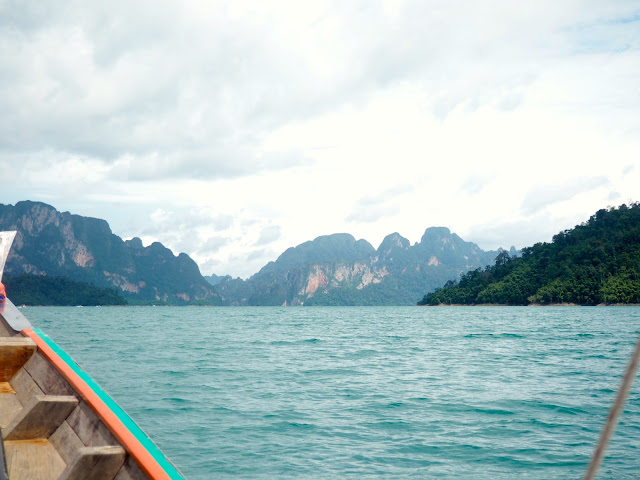 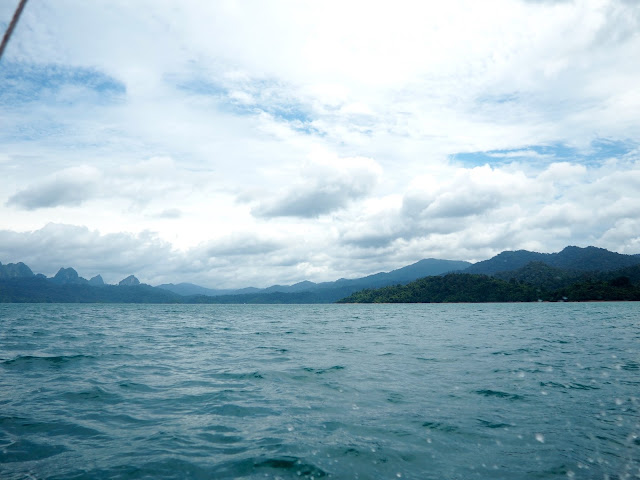 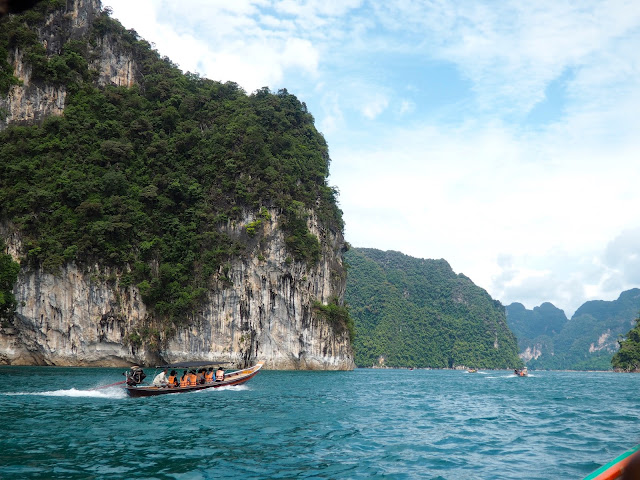 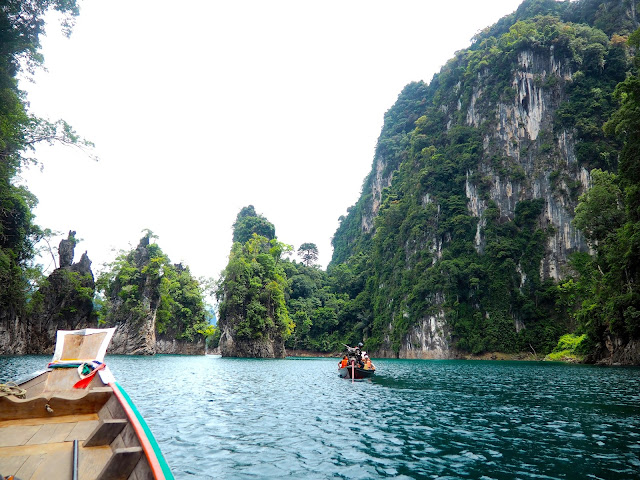 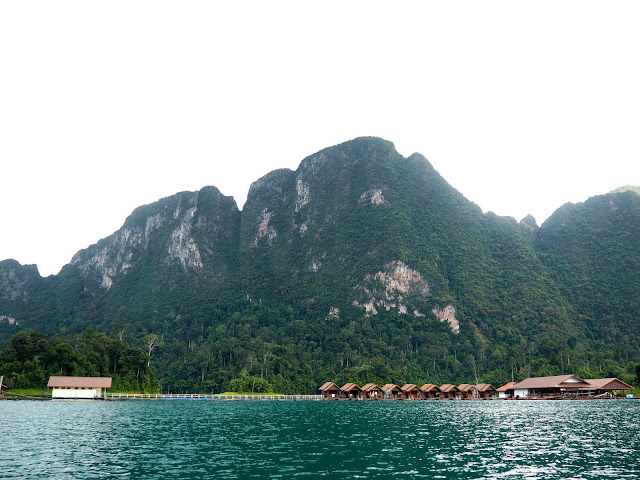 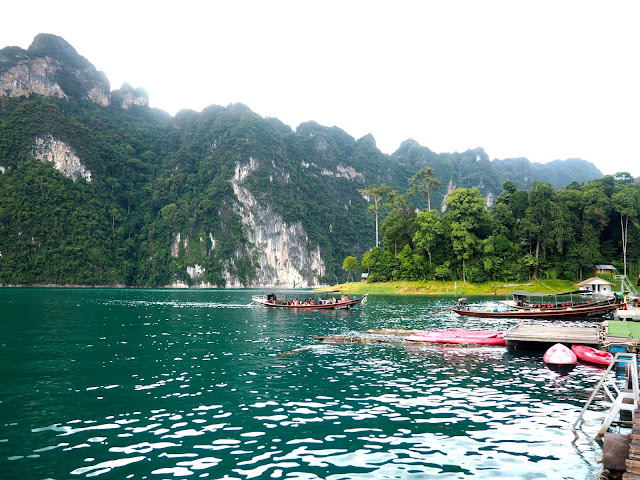 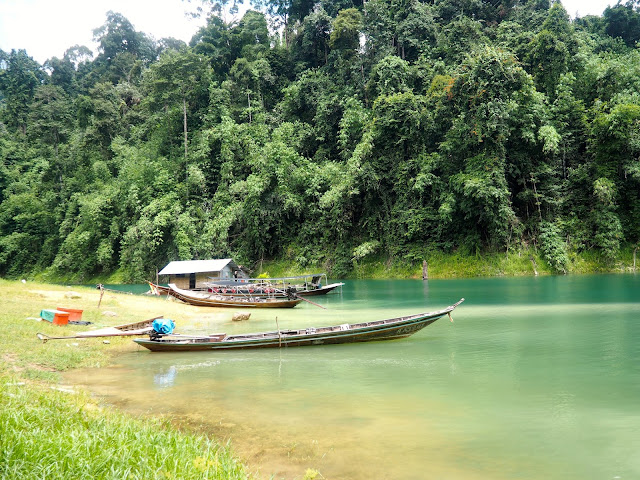 After lunch, we could either choose to stay at the floating house, or join the trek and cave visit for the afternoon. We had already paid the national park fee to do the trek anyway, so we got back on board the boat and travelled just a few minutes further away to another point on the lake’s shore. The trek was only about half an hour long, with a few steep inclines but didn’t go that high overall. The trickiest aspect was the wet, muddy path, since it had rained earlier! Our guide stopped along the way a few times to point out wildlife in the area; we saw plenty of lizards and ants, and several extremely large spiders living in holes in the ground! I’m not particularly scared of spiders, but I didn’t fancy getting too close to these ones. The trek led us to some more floating houses, with these long bamboo rafts moored outside them. A local woman there ferried us across the small body of water (an extension of the larger lake, but inaccessible for the longtail boats, hence the trek), and we were handed head torches on the way over. The Coral Cave awaited us on the other side, a mid-sized cave that would have pitch black inside without those torches! It was discovered by some fisherman, and is now a popular tourist location – thankfully the guide was warning us profusely not to touch the stalactites and stalagmites, something I knew anyway, but a cave like this could be ruined by people who don’t know that touching them stops them from growing, due to the chemicals on our hands. The formations inside were incredible though, many resembling coral, hence the name. Our guide pointed out various features, like the diamond elephant, the curtain formation, the bacon formation, and of course, the grandfather rocks. We saw some bats huddled on the ceiling, and then also found another huge spider lurking inside, even bigger than those on the trek! He got everyone to switch off their torches at one point too, to see how dark it was – very! – then used one to show us a shadow puppet monster, created by shining the light on a specific rock inside, which was very funny. 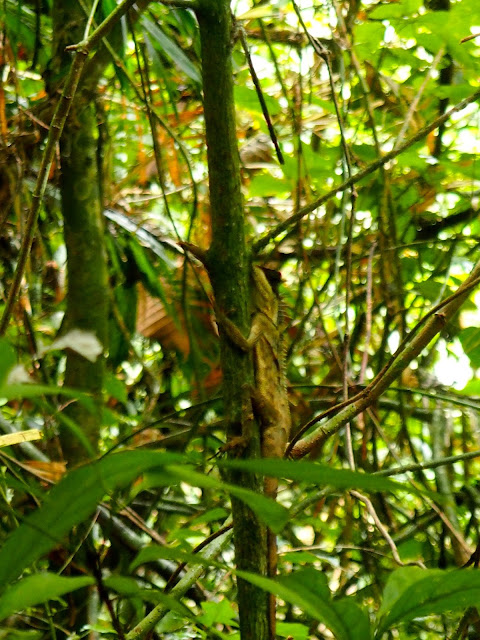 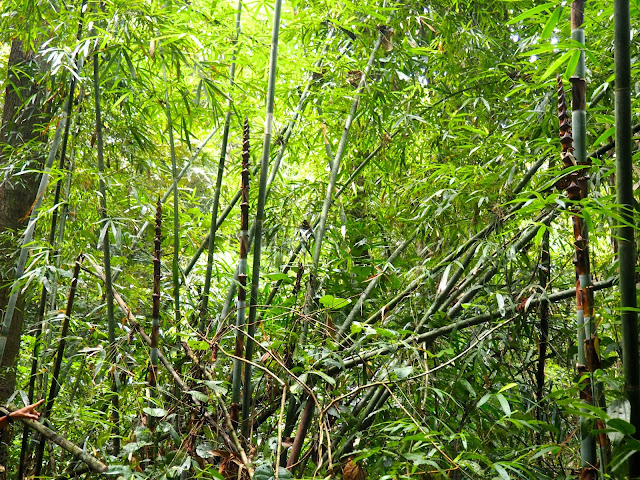 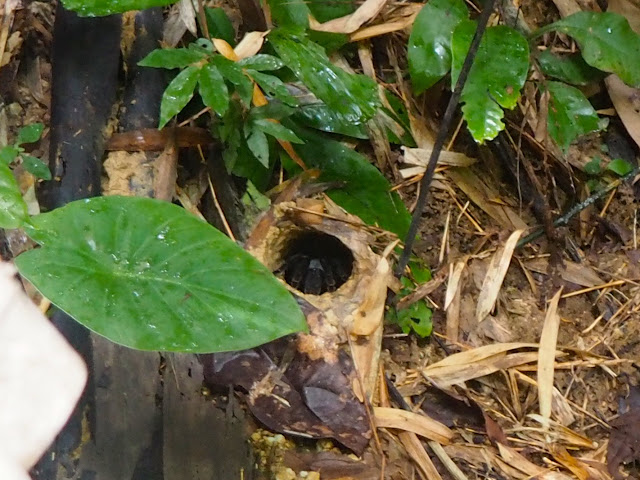 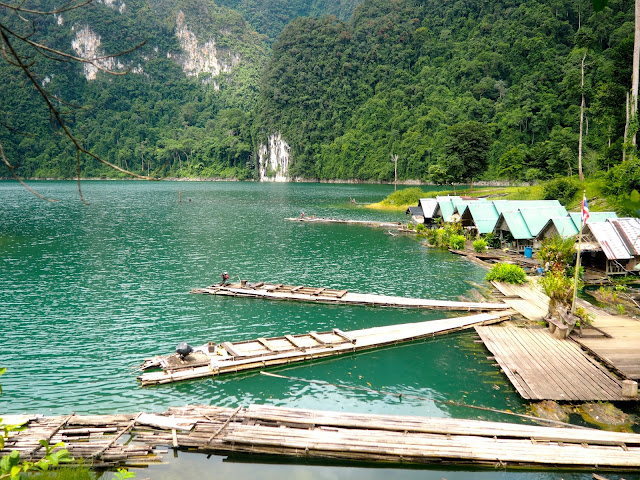 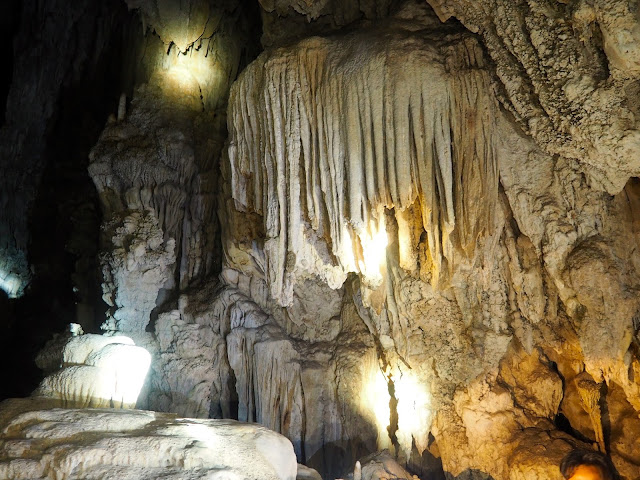 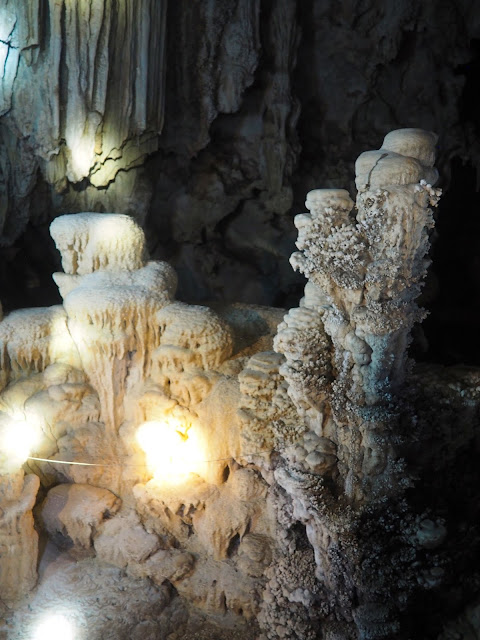 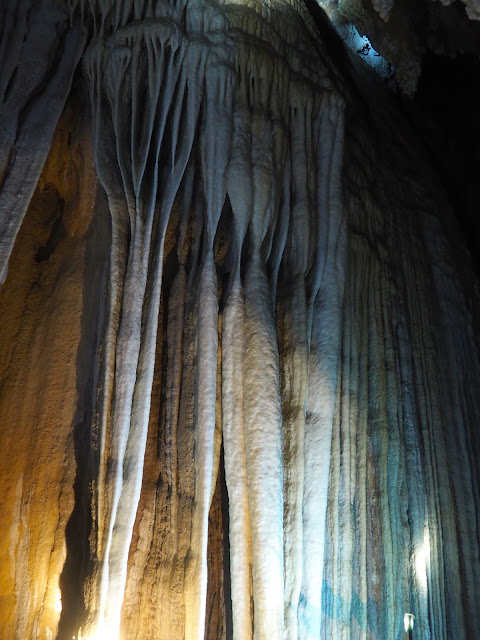 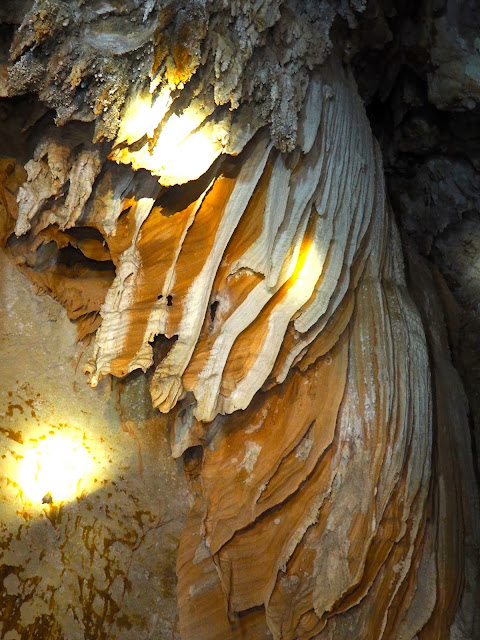 We exited the cave and returned the way we came – crossing on the bamboo raft, trekking back through the forest, and taking the longtail boat back across the lake. The return journey was much faster than the outward one, seeing as we weren’t making stops along the way this time! The boat was producing way more spray off the sides though, so we got pretty drenched on the way back. The guide also gave us some snacks, sticky rice with bananas, and monkey apples. I love sticky rice, but the monkey apples were a bit sour to have more than a couple of. He then drove us back to the hotel, where we had a quick dip in the pool, after sweating profusely during the trek – although the boat spray had probably washed us pretty well already! We had one more night there in Khao Sok, where we had dinner at another restaurant nearby, followed by a drink back at our hotel. We crammed a lot of activities into two days actually! The next morning we weren’t leaving until around lunch time, so there was time for more exploring, but I long ago learned the importance of resting while travelling too. I always want to see and do as much as possible, but without a bit of rest, I burn myself out pretty quickly, so that morning was reserved for a long lie, followed by some blogging (though I couldn’t publish when the power went out!), before we departed from Khao Sok.