Well, that’s a debatable title really, since I didn’t actually see the mountain… I was trying to though, that’s the point really. After my five nights in Kyoto (parts one and two), I was on the road again and bound for Tokyo. However, while researching Tokyo, and potential day trips out of that city, Mount Fuji was brought to my attention. I hadn’t realised that it wasn’t all that far from Tokyo, and possible to visit in a day. But seeing as I would be coming from the same direction when I arrived from Kyoto, it struck me that it might make more sense to visit it en route. Cue several hours of researching locations to view it from, and the various trains and buses it would take to get there and then to Tokyo, and I eventually had a plan in place! There are a few locations you could visit, but I settled on the Fuji Five Lakes region, specifically Lake Kawaguchiko.

Since I was travelling and doing what was essentially a long journey and a day trip all in one go, I had a pretty early start, leaving Kyoto by train at about 7am. I took the Shinkansen to Mishima, changing at Nagoya along the way, which took about two and a half hours in total. From Mishima, there is an express bus to Kawaguchiko, which is far quicker than taking multiple trains to the station there. I nearly got lost around Mishima train station, as I’d taken the wrong exit and had to get a guard to let me pass back through the ticket gates to get out the other side. This made me glad I had a good window of time to catch the bus! I had reserved my bus ticket in advance, since they’re only every hour or so, and you have to buy from the ticket office to be given a seat number if you do it on the day. Anyway, I got on the bus and it took around an hour and a half to arrive at Kawaguchiko train and bus station. The skies had been cloudy and rainy throughout this leg of the journey, as the forecast had said, but given that it had been wrong for much of my time in Kyoto, I was remaining optimistic! Sure enough, it was brightening up when I arrived at Kawaguchiko, though there was still cloud lying low. I had my big bag with me, so first priority was stashing it somewhere for the afternoon. The coin lockers at the station were all occupied, as it was nearly midday, so I turned to tourist information to ask if there were other options. A few bags were left on top of the lockers, which is probably a safe choice in Japan, but I was reluctant to risk it. The office pointed me towards a shop across the street, a backpackers place offering bike rental, as well as bag check for the day, so I trusted in the tourist office’s advice and left it with them. 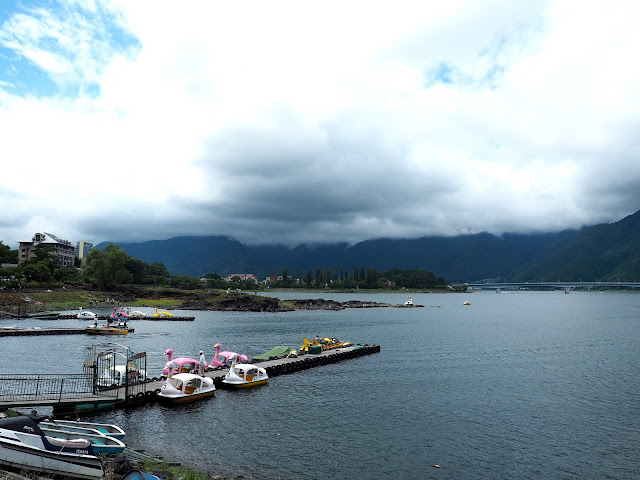 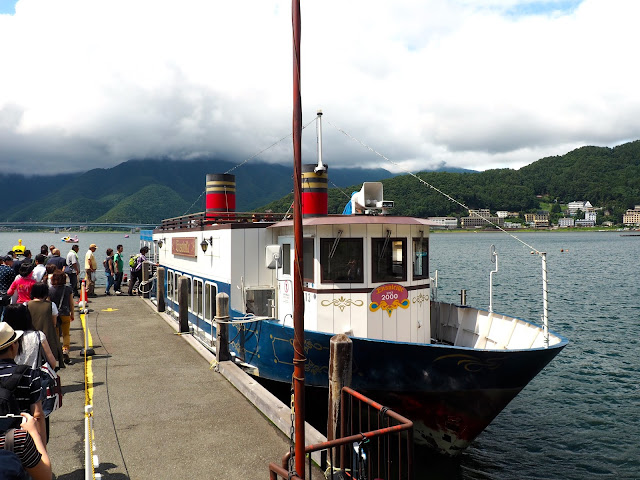 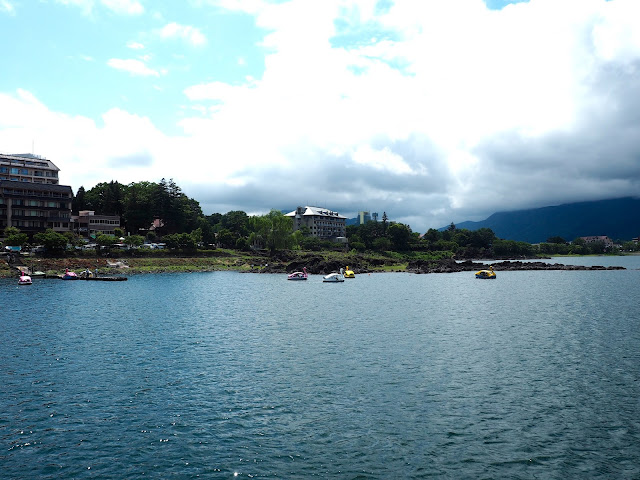 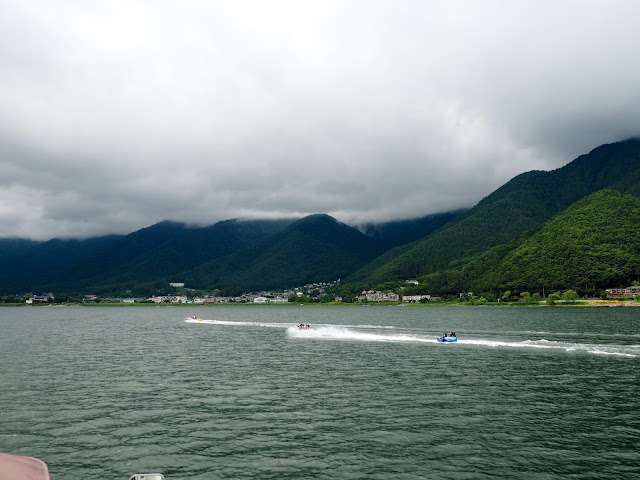 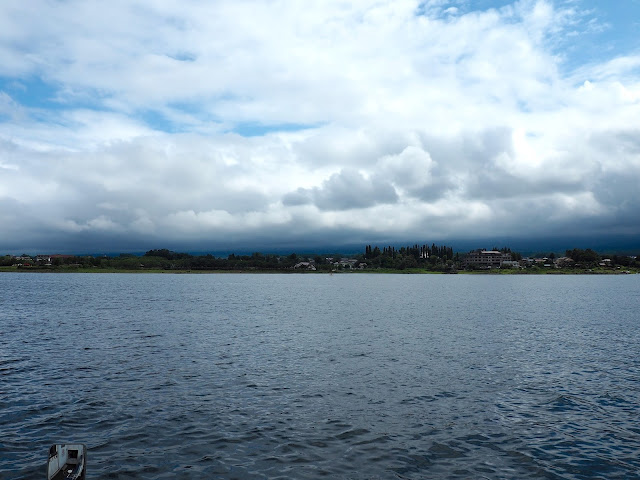 To explore the area – there was more than just a mountain to look at! – I got a ticket for the sightseeing retro/omni-bus, which has a couple of routes around the area, but I was focussed on the red route. The ticket allowed me to hop on and off as much as I wanted – initially I’d looked at the possibility of visiting Chureito Pagoda later in the afternoon, but it took longer to store my luggage than I’d thought, and that would involve another train ride a few stops away, so I decided to stay around the lake and explore a few stops on the bus route. First up, I wanted to try the boat cruise around the lake, and the stop for that would also put me in a position facing Mount Fuji – the bus station sort of pointed the other way. The entire bus route only takes about half an hour, and the En Soleil lake cruise was only about ten minutes from the station. I had to pay extra for the boat, but you can get a combo ticket with the ropeway across the road. My fear of heights meant I didn’t take that option though! The cruise take around twenty minutes, and there’s commentary telling you more about the lake in both Japanese and English – there’s been a fair few occasions on this trip where I haven’t had an English option, so I was very grateful for it! It also became apparent at this point that Fuji was nowhere to be seen. Much of the sky was blue, but the mountain was covered in a thick layer of low-lying clouds! Even the smaller peaks close to the lake were mostly obscured. I was disappointed, of course, but I had made it this far, so I wasn’t going to let it stop me having a nice day by the lake. I love going on boats any chance I get, so standing on the top deck, cruising around in the breeze and sun was still very enjoyable. 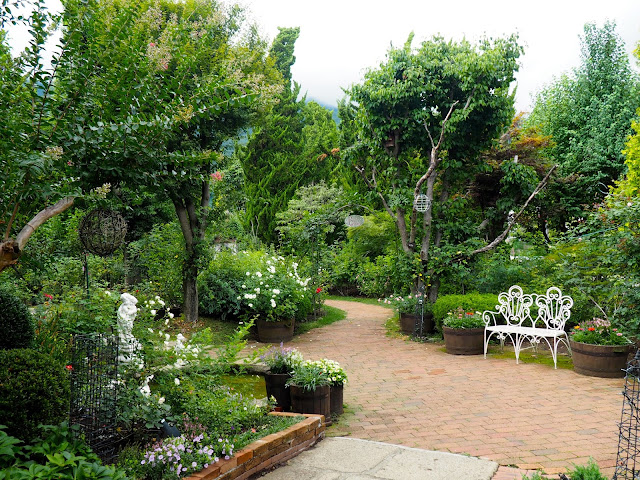 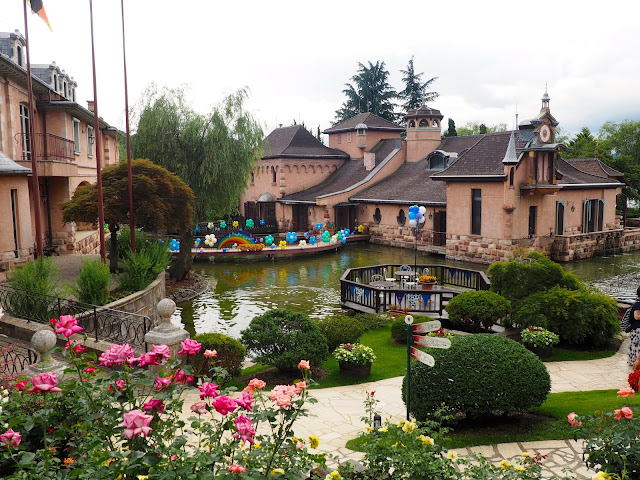 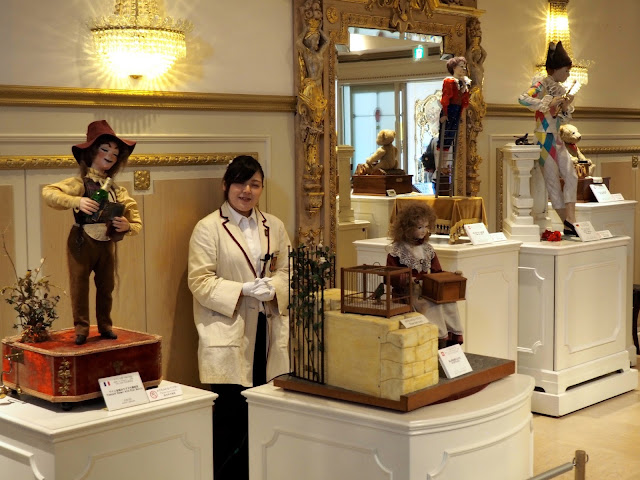 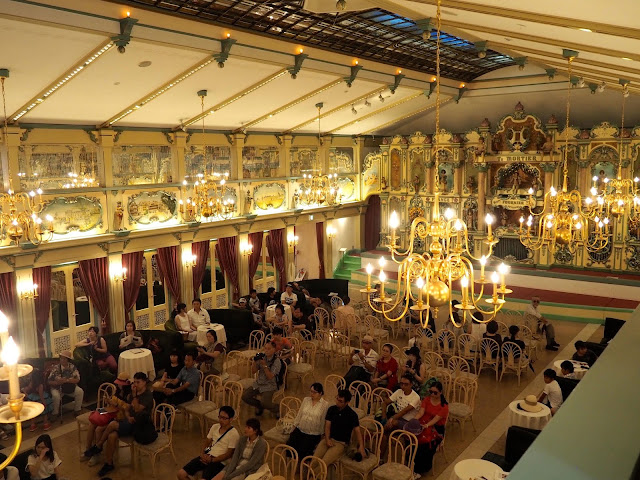 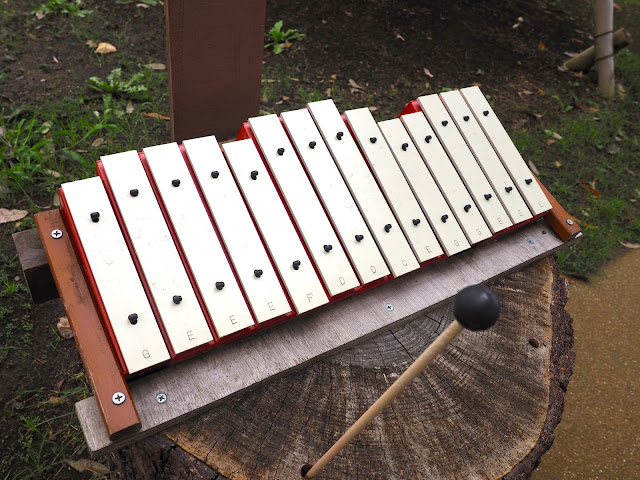 Back on land, I spent a little while browsing the shops around this part of the lake, mostly stocking souvenirs of Fuji, and grabbing some snacks and coffee to continue on with my day – I’d also had lunch at the cafe back at the bus station before getting the omnibus! I hopped back on the next bus that came along, to see what else was around the lake. The cruise was the only thing I’d decided on in advance, so I took a look at the list of stops to see what else might be of interest. ‘Music Box Forest’ certainly caught my eye, so I made that my next destination, not knowing what to expect, but certainly intrigued. It turned out to be a small museum, but partially outdoors and with a cafe and shops inside too. From the outside, I could see various sorts of sculptures and a carriage! I entered and discovered it was almost like a little European village, supplanted in the middle of the Japanese countryside. The main hall had an exhibition of music boxes, although the attendant demonstrating them only spoke in Japanese, so I ambled around on my own before moving on. The same was true for the organ demonstration next door, but it was all very pretty and ornate to look at. The gardens had a few interactive musical items – although the xylophones with notes laid out to play one specific tune only frustrated me a lot, as a former tuned percussion player! – as well as floral features, a small pond, and lots of benches to relax. It was a quite an unexpected thing to find, but it amused me to wander round for a while. The gift shop was pretty, but the perfumery and cafe were rather overpriced, I have to admit, especially when you considered what I’d already paid the entrance ticket – it was an interesting place, but a bit overpriced for sure, especially if you don’t speak Japanese! 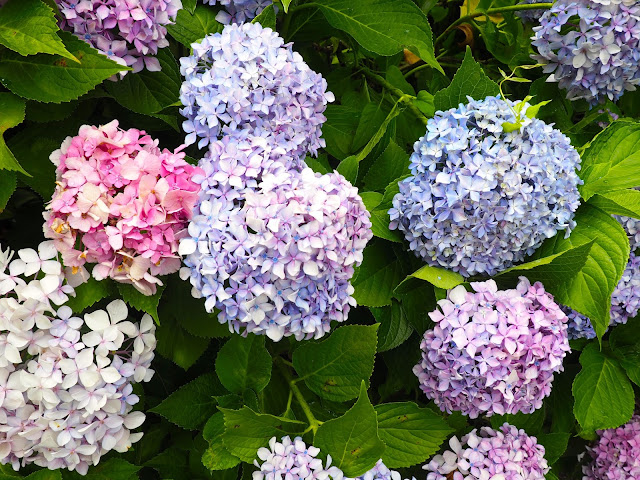 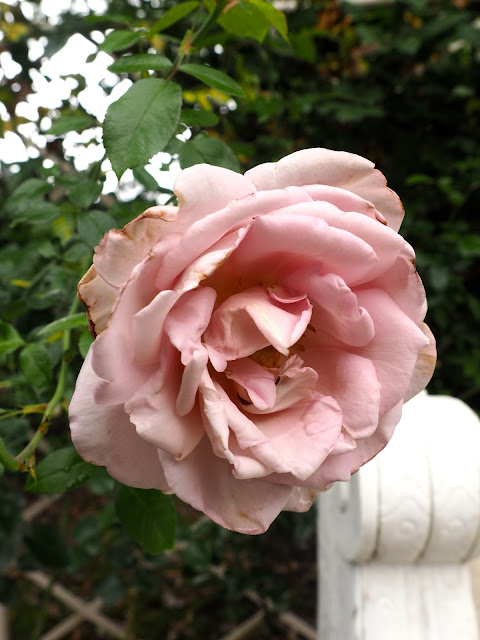 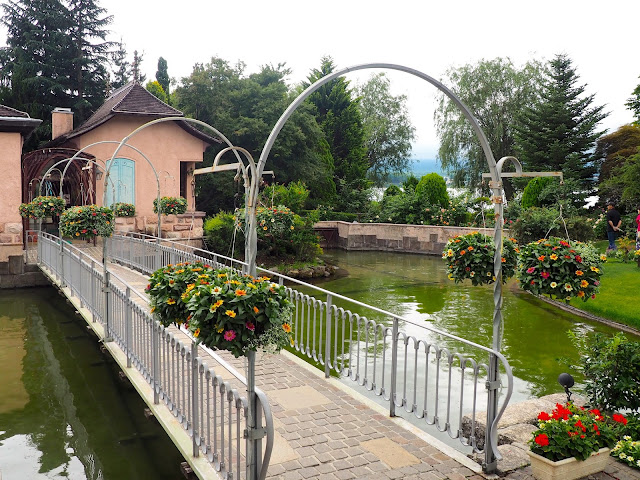 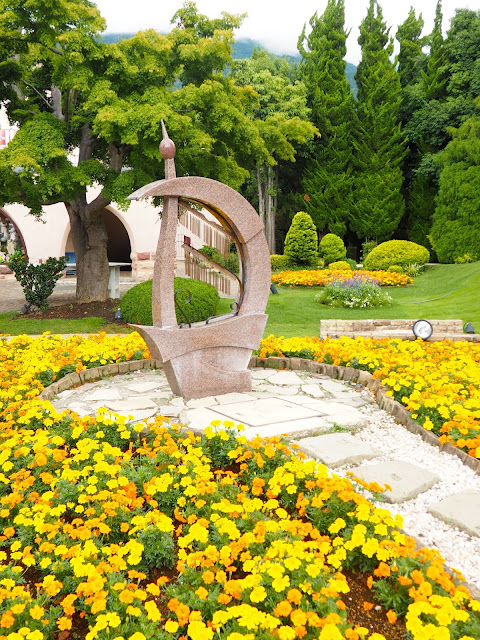 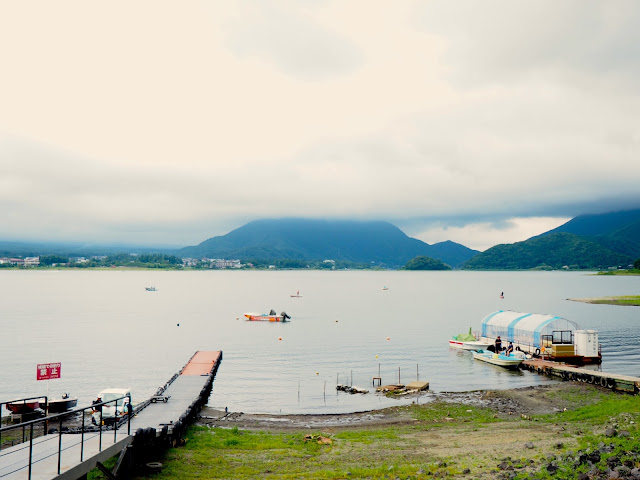 From there, I exited towards the lake, and took a stroll along its banks. This would normally be the prime viewing spot for the mountain, but it was still completely obscured, and the sky was looking bleaker by the minute. Initially I’d thought about taking the bus to near the end of its route, where there was a park, but I had a bit more time to kill, so I walked around the banks for a while instead. There were locals in small boats around, and a group that had been doing water sports on the lake earlier, as I’d seen from the boat cruise. I wandered around for a while, before doubling back on myself and finding a bus stop again. The omnibus returned me to the bus station, where I picked up my bag and grabbed some food for my bus ride into Tokyo. Again, rather than taking trains with multiple changes, I found there was an express bus straight to the city. I booked this in advance too, as I’d read it can get quite busy, which proved to be a good idea, as they’d actually put extra coaches on at the time I’d booked. It should have been around 2 hours, but ended up being over 3, as the traffic heading into Tokyo was horrendous at that time of night – I should have thought about this in advance perhaps, but oh well! Luckily my hotel wasn’t far from Shinjuku bus station, so I just had to walk ten minutes through the streets – Shinjuku at night is quite the introduction to Tokyo! – before crashing for the night, ready to start exploring the city more the next day.