Hiking: Mui Wo to Pui O

I will never get enough of public holidays! It’s so refreshing to have a midweek break, and splitting the week in half like that makes it far easier to get through the whole thing. This week it was Dragon Boat Festival on Tuesday. I went to Stanley last year to see some of the races, but when you don’t know any of the teams competing, I found it got a little boring kind of quickly. So this year I opted to skip it, and steer clear of the major racing locations (mostly on the south side of the island, or out towards Sai Kung), and use the sunshine for a hiking day. I picked one on Lantau Island, to steer clear of the holiday traffic as much as possible, going from Mui Wo ferry pier to Pui O beach. 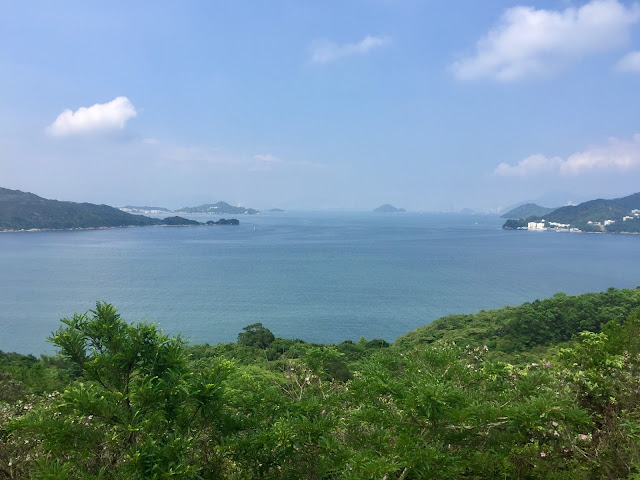 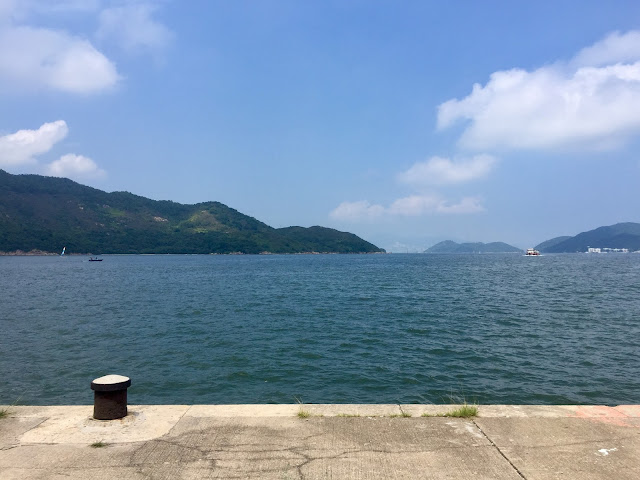 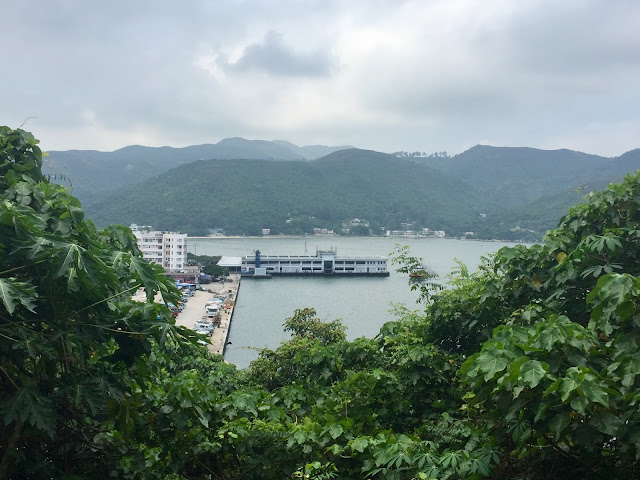 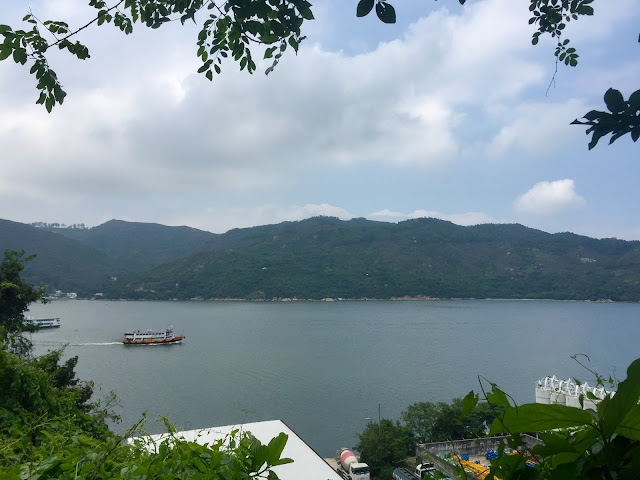 Mui Wo can be accessed by bus (via the MTR to Tung Chung) or by ferry, and I chose the latter, catching the service from Central in the early afternoon. The boat wasn’t too busy, which was a pleasant surprise, as I was anticipating a lot of people heading to the beach there. The trail I was looking for is Section 12 of the Lantau Trail, which I would actually be tackling in reverse. The start of the trail can be found by following the shore to the left as you exit the ferry; I wasn’t too sure if I was going the right way at first, since I was more or less alone on an empty road, but the trail sign appeared soon, on my right, taking me uphill and inland a little. The trail was quiet, and I only saw about a dozen others on it, heading in both directions, as a lot of people would be at the races, or taking it easy in the heat – Hong Kong’s summer humidity has well and truly arrived! – and I don’t think this is the most populated hiking trail a lot of the time anyway. I was hiking on my own too, as I was in need of some quiet, decompression time to clear my head a little. I often hike in silence when alone too, but I plugged into my iPod this time, and it was really nice to focus on the music, rather than using it as background music while doing other tasks, and I was able to connect with songs and bands that I’ve long loved again. 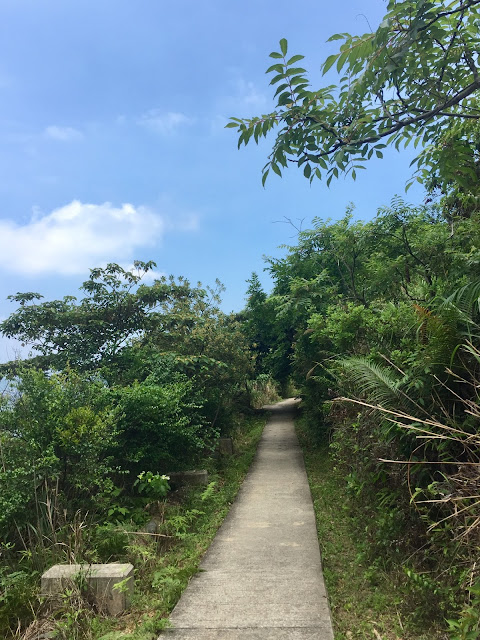 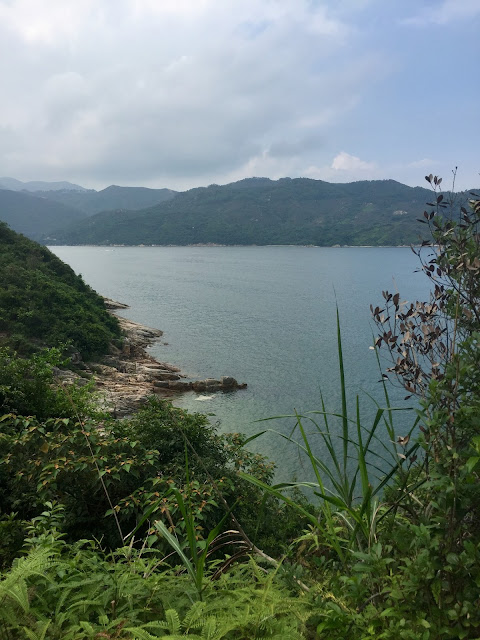 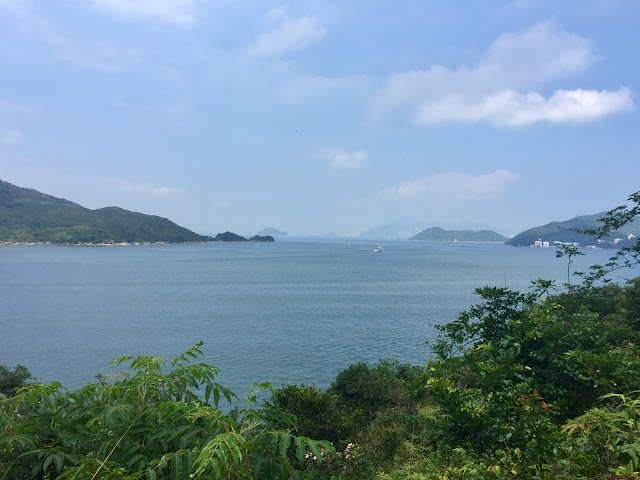 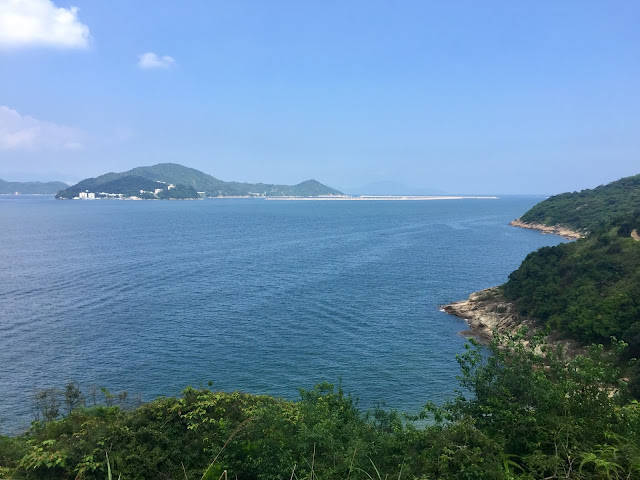 The trail wasn’t overly strenuous, but did take a little longer than I’d expected, taking nearly 2 and a half hours, rather than the just under two I’d been anticipating. The first part had some amazing views, as it followed the coastline of the island, offering views of the brilliantly blue sea and other nearby islands – I could even see as far as Kowloon in the distance. I stopped plenty of times here, climbing onto the large blocks along the pipeline in the ground (no idea what they’re actually for) to take pictures over the top of the foliage. It was very sunny, and even along the coast there wasn’t a lot of breeze, so I got sweaty pretty quickly! Not my favourite sensation, but at least I knew I’d feel this exercise! After the initial stairs, it was fairly level for a long time, with only slight ascents over the hills, so I wasn’t getting too tired just yet. After a while, the coastline disappeared, as the trail turned further inland, and was covered by more trees – which was actually somewhat of a relief, as I was covered in suncream, but still a little worried about getting too much sun exposure. The mosquitoes were out though, and even with a couple of bug spray applications, I came away with a few bites on my legs – typically they look like a dot-to-dot puzzle by the end of summer here, so this is only the start! 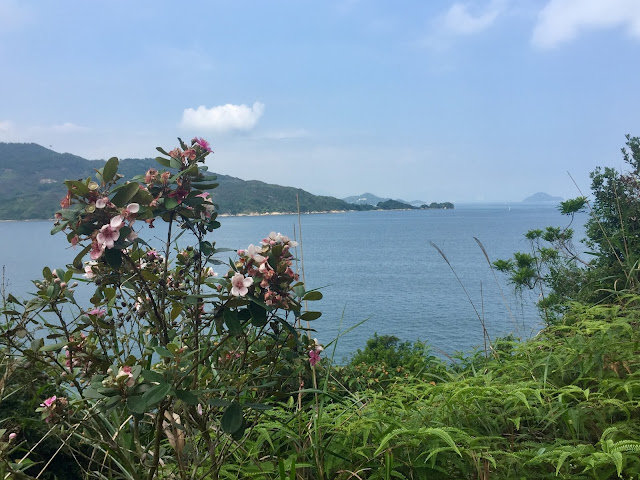 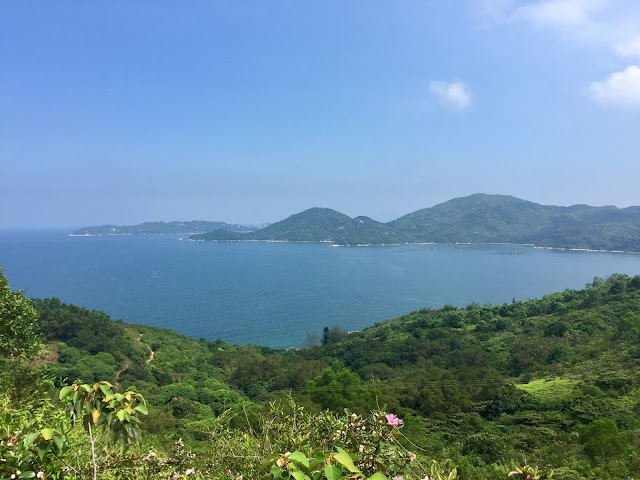 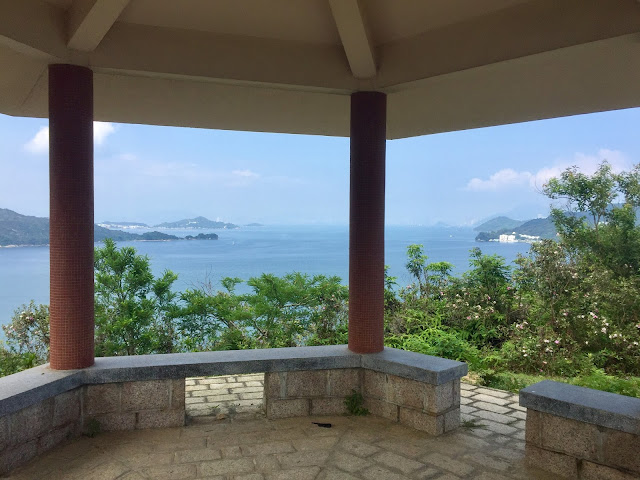 The trail stretched uphill more at this point too, and although it wouldn’t have been anything I couldn’t handle most of the time, the heat and the stillness of the air did make it a little harder to breathe, and the sweat was pooling (delightful, I know), so I was taking frequent breaks by this point. I kept winding uphill, through the trees and up the rocky stairways, heading towards the trail’s peak – easy enough to spot, with the helipad in the grassy clearing! My heart and lungs were relieved to not have to go uphill anymore, but my knees and ankles hated the downhill portion! The trail opened up again at this point, leaving the tree cover, and most of the descent was more rocky stairways. Since the ascent had been fairly gradual, I’d forgotten how far up I’d come, and it seemed to take a long time to get down again! There were some more views opening up here, with other large hills visible, and eventually I could see ocean and coastline again, with the view of what I think was Shap Long village being one of the best I’d seen all day! 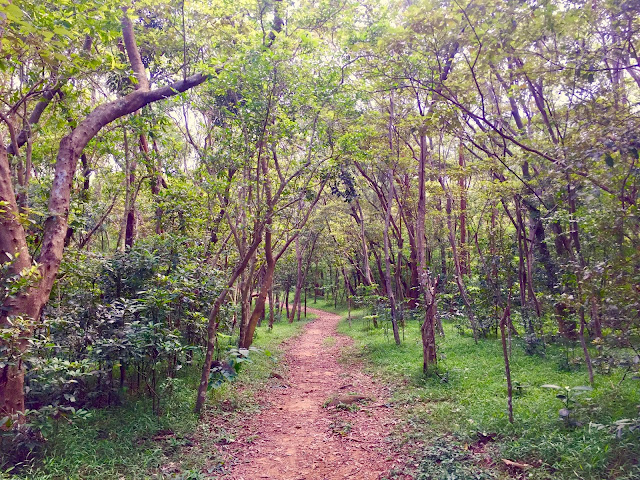 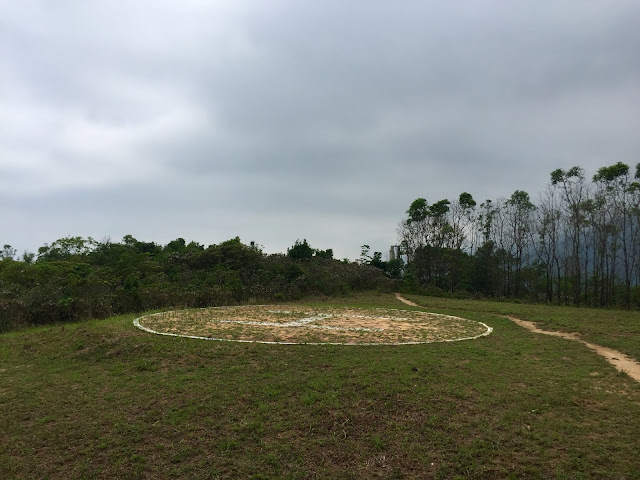 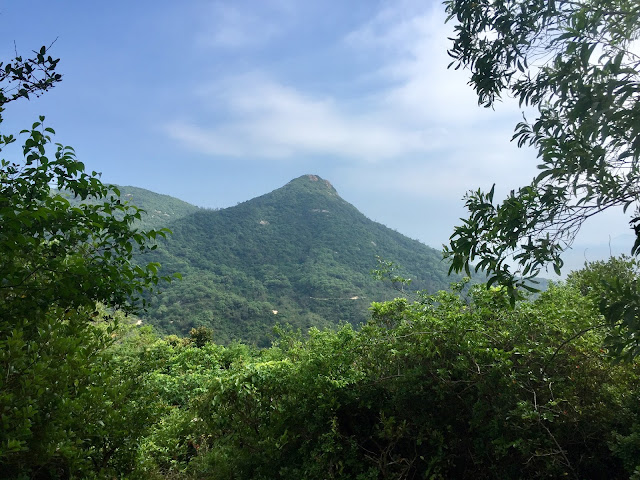 Eventually the stairs ended, meeting a road again, but it was still another 40 minute walk to get to the beach. This was along a concrete road though, so much gentler, and there wasn’t much of a descent left, so I was able to get down to the shore pretty quickly. I was actually quite surprised when I turned a corner and was met with the view of the beach, not having realised how close I actually was. It was late afternoon by this point, so the sun was getting lower over the water, making for some very pretty reflective views over the water. I’d also observed several large dungheaps along the trail, and had wondered what animal would have left them; my question was answered when I saw the buffalo meandering along the sand! Turns out Lantau has a few small, wild herds of them, which I was previously unaware of. You can take a shortcut from the path to the sand by wading through an inlet of water, but as I was wearing socks & sneakers, which take forever to get on and off, I took the long way around, sticking to the path instead. I’d been intending to stop on the beach for a little while, perhaps taking a dip to rinse off the sweat, but having seen how busy the beach was (it was a public holiday, I shouldn’t have been surprised), I decided to follow the village path straight to the bus stop instead, as I was tired and figured that the crowded beach would make me grumpy, and I’d rather stick with the good mood my hike had put me in. 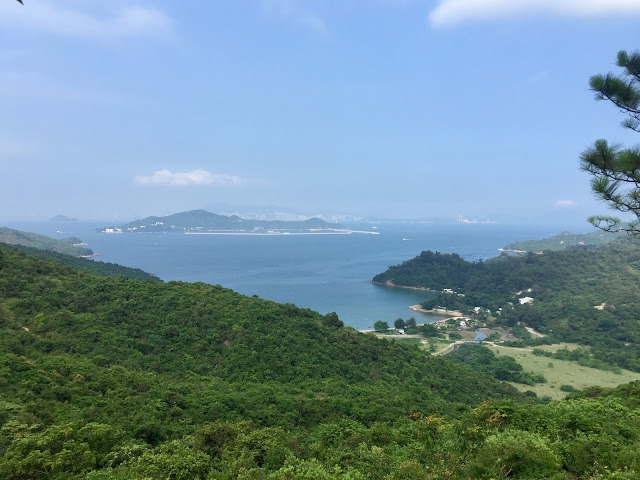 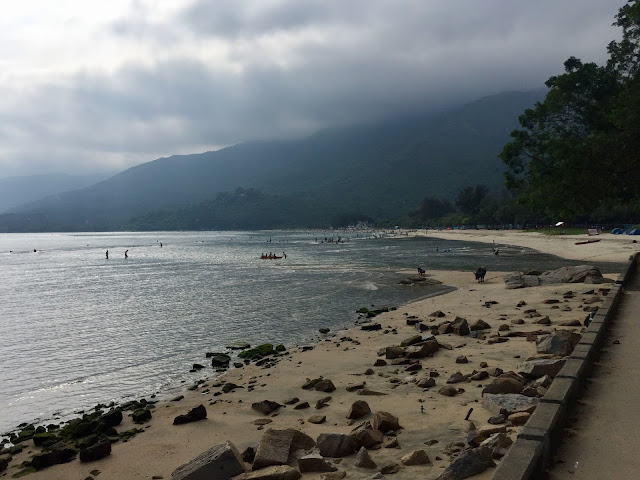 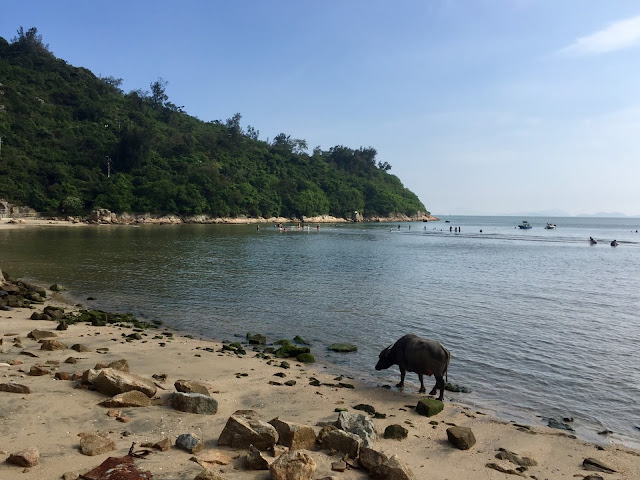 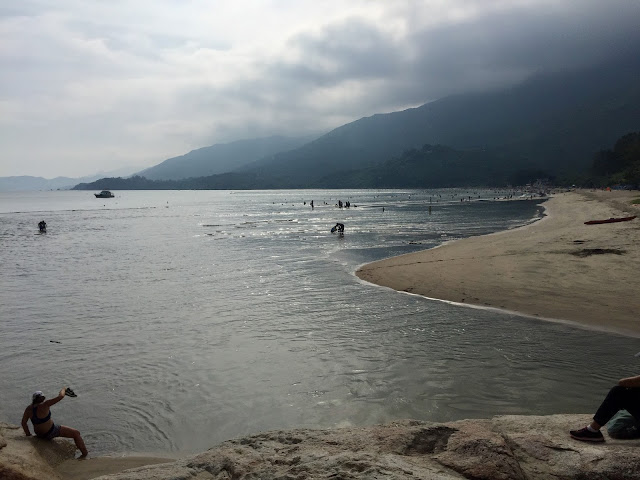 It was definitely a hike for sunny weather, as the views were a million times better than they would have been under cloud cover. It’s a good midlevel hike I’d say, with enough of an ascent to make me feel like I got a work-out (speaking as someone relatively unfit when it comes to cardio activities, hence the reason I hike rather than run or go to a gym), but not leave me aching and exhausted. The alone time, with just the countryside and my music was also just what I needed, as I finished the day feeling refreshed and relaxed – I absolutely do enjoying hiking with friends, chatting along the way, but I also value my alone time too. And taking the time to think, or even to not think and just listen to the music and soak in the views, was definitely a better way to spend alone time than at home on the Internet, as I’m prone to doing a lot! Definitely a holiday well spent – just a shame there’s no more weekday holidays for the rest of the school year!