No, not that first. This tag is about when I did various things for the first time, or do first on a regular basis. I’m so tired after a full week back at work (including a Saturday morning again, I did not miss those while in Korea!) that I couldn’t bring myself to write the post I had in mind today – I really should get back into a habit of writing posts in advance again! But I’m a procrastinator. Anyway, I’ll hopefully do that other post sometime soon but for today, you’ve got a tag post. The questions are edited together from a couple of different firsts tag posts I found, and I don’t remember where I got them all from. 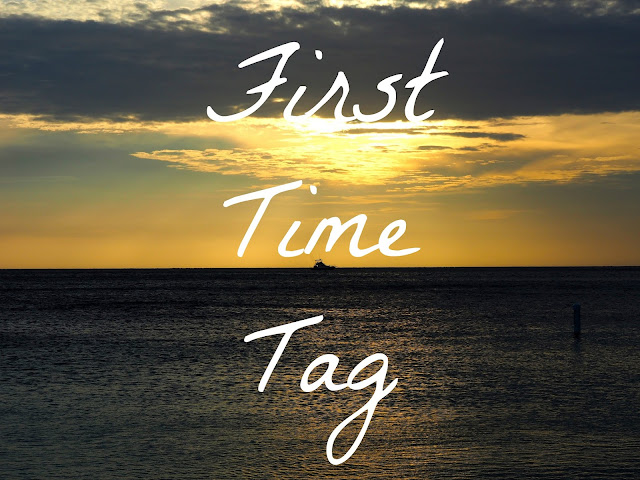 1. First pet
I remember being told that my first pet was a goldfish, who I very creatively named Goldie… Since I have no memory in the slightest of said fish, that gives you an idea of how young I must have been. I remember numerous other goldfish over the years too, though not all their names. Our dogs don’t count as pets to me, as they’re working animals, and not really ‘mine’ like the fish were.

2. First job
I’m fairly certain my first job was as a shop assistant in the accessories shop my auntie owned for a few years. It wasn’t a regular thing, as it was a small shop, but for a few years she would have me in on the Saturdays running up to Christmas for extra help, probably when I was around fifteen I think. Around the same time I occasionally was a kitchen assistant and/or waitress with the catering company my mum works for, and babysat my cousins. Both of these were just from time to time as well – my first official job, not through family, was as a waitress in a tea room on the Royal Yacht in Edinburgh.

3. First alcoholic drink
I genuinely have no idea. My parents allowed, and even gently encouraged me to drink alcohol from at least the age of fifteen, to introduce me to it gradually, rather than me sneaking it behind their backs, or getting utterly wasted when I turned eighteen (I still did that, but at least had some experience behind me). I fairly certain I started with pear cider, and then those alco-pop type drinks, before moving on to wine and hard spirits, but I couldn’t say exactly when my first was.

4. First car
I’ve never had my own. I mostly learned in the driving instructor’s car, and was insured on my parents’ car, though only drove it a handful of times, since it’s a huge 4×4 brute of a thing. I passed my test when I was seventeen, but haven’t been behind the wheel in over four years now, as I’ve just relied on public transport.

5. First kiss
I do not have any sort of romantic story here! I was seventeen, I was drunk, I’m not even sure I remember his name. I think by that age, I was very aware of never having kissed anyone, so I just wanted to get it over with. Oh dear!

6. First real boyfriend
Look, the first kiss story should indicate how shit my love life is. I’ve never had a real boyfriend, I’ve never even got that close to having one. It doesn’t bother me too much now, as I’m still young, and my current lifestyle is far easier to carry out while having the freedom of being single, but hopefully one day I’ll find someone!

7. Who was your first teacher?
I’m going primary school here, as I remember no one from my playgroup/nursery days. I went to a small village school, so my P1 teacher was also my teacher all the way through to P5 (how she taught so many ages and levels at once is remarkable now that I’m a teacher). Her name was Mrs Sinclair and I have nothing but the fondest memories of her. I ran into her shortly before moving to Hong Kong the first time round, and it was very weird seeing her as an adult myself!

8. First sleepover
I’m not very sure, but as I went to a small school, as mentioned, I know it was probably at the house of one of the three girls I was friends with at that school (one in my year, the other two were the year above us), but I couldn’t be sure which one. Or we could say it was at my grandparents’ house, as I’m sure it was the first place I stayed over at away from my parents.

9. First concert
As a kid, everyone my age either loved S Club 7 or Steps, and for me, I was completely and utterly obsessed with S Club 7. I had all the albums, I watched the TV show, and I saw the movie, I was very sad when they broke up. So my mum got tickets and took me to see them when I was six years old, and I loved it!

10. First broken bone
You know, now that I think about it, I realise I’ve never actually broken a bone. The worst I ever did was fall at an awkward angle at my friend’s place while we were playing some game outside, and ended up tearing ligaments in my hand, so I had one of those tube bandages to wear for a while, but I’ve never broken the actual bone.

11. First movie
My primary school teacher, mentioned already, would occasionally surprise us with an afternoon cinema trip (obviously she’d told our parents, but it was always kept secret from us), but I can’t remember the first thing she took us to. I probably watched my first movie at home, and it was doubtlessly a Disney classic, but I don’t remember what. The first movie I have strong memories of seeing in the cinema was the first Harry Potter film, as the books had been read to me, and I was seven when the first film came out – I remember hiding in fear when Voldemort’s face was revealed at the end!

12. First sport you were involved in
I never did much sport as a child, as I hated sports and exercise, and still do. However, the first was ballet (counting dance as a sport here), which I did when I was around four or five and remember really enjoying it, and probably would have done for longer, but the teacher moved away and there was no one else in the area that taught it. To this day, dance was the only part of PE I was much good at, but I never took any other lessons in it, which I regret a little now, but there weren’t many options in our town. I also took swimming lessons for years, which would be the only other sport I was involved in outside of PE classes.

13. First tweet
Haha, this is still so accurate though!

14. First piercing
Are we counting just regular ear lobe piercings? I got those done when I was ten, in my auntie’s kitchen. I should stress, she did them professionally, as it was a service she offered in aforementioned accessories shop. My only other piercing is the top of my ear, which I got done spontaneously, with my friend talking me into it, when I was twenty.

15. First airplane journey
I don’t remember it, but I know what it was. When I was eighteen months old, my parents took my on my first holiday abroad, travelling there and back on a plane, and it was to Menorca, the Spanish island (the little one, next to Ibiza and Mallorca), which I’ve now visited a total of seven times on family holidays.

16. First foreign country visited
This question confused me at first, as I didn’t see why it was necessary after the last one, because my first airplane ride was to my first foreign country visited – Spain! Then I remembered lots of people live in countries much bigger than the UK and may have taken a domestic flight as their first. I’ve only ever flown to London within the UK, and that was for connecting flights – I take the train if I’m actually visiting London.

17. First roommate
Bridget! And she is still my favourite roommate. I haven’t had many roommates actually, as I had a single dorm room for my first year at university, and on my third year abroad. Bridget and I were friends in high school, and ended up at the same university, and lived together in both second and fourth year. We got on well as flatmates, and did stuff like split groceries, cook meals together, and frequently did pizza and film nights, which I miss! Sometimes living with friends isn’t a good idea, but it worked well in our case. We had a lot of the same friends too, which was good for when we had flat parties. We lived with one other person in fourth year, and I had a roommate when I first moved to Hong Kong too.

18. First thing you did this morning
Hit snooze. I purposely set my alarms to allow at least one snooze before I need to get up, at which point I stumble to the bathroom and do all the relevant stuff in there first, then get the kettle boiling for the coffee that I need in order to function like a semi-regular human.

19. First person to text you today
My mum. That is partly because of the time difference though, as it was about 1am here when she sent it. It was also in relation to travel plans later this year, which is very exciting stuff to look forward to!

20. First thing you do when you get home
It varies. If I’m not going out again, bra off. Most nights I’ll start making dinner first, as I’m always hungry when I get home, then eat that while watching a TV show. Other times I might shower first, or throw in a load of laundry, or do some light cleaning – if I have any sort of chore like that, I’ll normally get it out the way, so I can relax for the rest of the evening.