Charlotte Travel
The Mekong Delta is formed of dozens of lush, green islands, broken up by a maze of narrow, winding rivulets, branching off from the main delta. Here many of the locals lead simple lifestyles, away from the larger cities, and fishing is a dominant industry. The Mekong River starts over 4000km away, and flows through China, Myanmar, Laos, Thailand, and Cambodia, before reaching the sea in Vietnam. We travelled here from Ho Chi Minh City, just a couple of hours away by bus, to explore the area, and spend the night in a local homestay. After taking the bus down from the city, we boarded a traditional wooden boat on the muddy coloured waters, brown from all the silt picked up along its way, and began our journey through the delta. 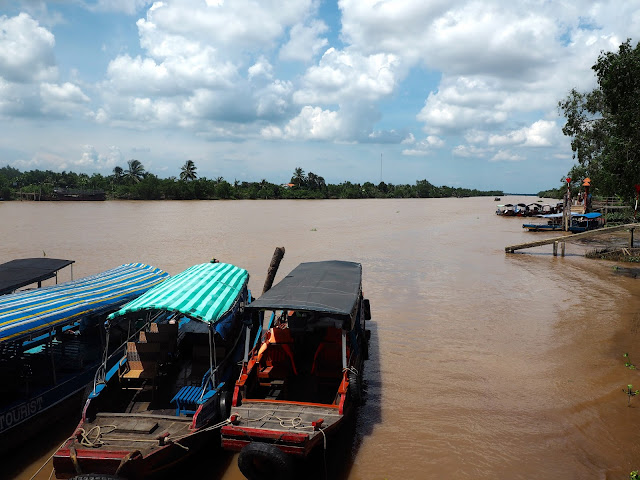 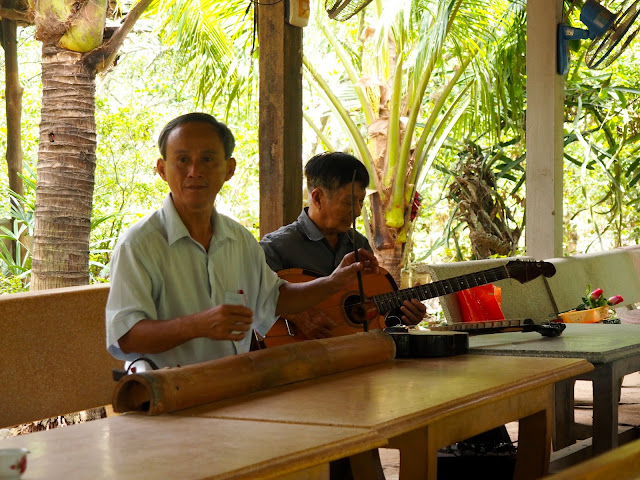 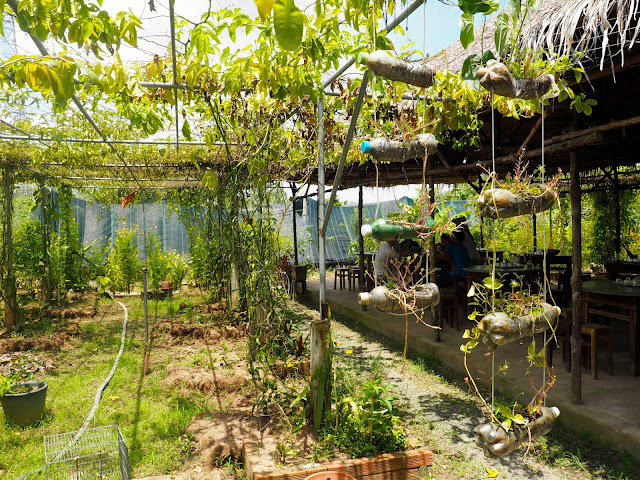 After disembarking the boat on the first island, we immediately plunged into thick green foliage, a tropical sort of jungle surrounding us, a far cry from the more built-up city we had just left behind, across the water. Some simple wooden houses and pavilions greeted us soon though, and we were give an introduction to the fruits grown in this region, such as jackfruit and dragonfruit, how they came to grow here, and what they taste like and such. We took seats in one of the pavilions and were given a selection of the fruits to try, along with tea to cleanse our palates in between, as some were sweet and others were sharper. I’ve come across some of these, like dragonfruit, before, in Hong Kong, but others were less familiar. While we munched away, we were treated to a performance by some local musicians, singing traditional songs from the area. They are mostly written about their daily lives, featuring their work and families, though they did know a couple of Western songs too, such as the ones I used to sing to my kindergarteners! We couldn’t understand the Vietnamese lyrics of course, but our guide gave us a summary of each song. What was particularly interesting was the traditional instruments they used, and we were given the chance to try them ourselves afterwards, which proved to be very difficult! The man playing them was clearly very experienced, but as our guide explained, without all the amenities and entertainment found in cities, this is how they spend their free time on many of these islands.

We continued on through the dense greenery, until we came to a small bee farm. They removed a sheet from the hive, which had dozens of bees crawling over their precious honeycomb, and we learned that if you blow gently on the bees, they will move aside, allowing a finger to quickly be stuck in to steal a taste of their honey. We were also treated to some honey tea, with pollen mixed in too, which was absolutely delicious, and were offered some royal jelly products to purchase, if we wanted. Then it was a short walk back to the boat, to continue our tour on the next island, which is actually big enough that you wouldn’t realise it was one. We sailed alongside the land for a stretch, admiring the views across the river and the other boats drifting along. The next stop was another small wooden sort of pavilion, which was the site of a coconut candy factory, another local industry, which apparently people from many other parts of Vietnam come to buy. They explained the process of making the candy, before offering some free samples and products for sale, though a few of us were distracted by the little boy chattering at us and playing around us at the same time. The candy was very tasty though, all hand-made, and with several flavours on offer, though I didn’t buy any to take away. 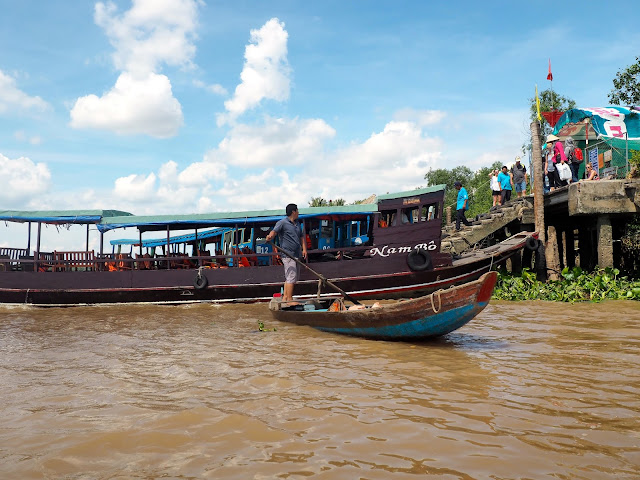 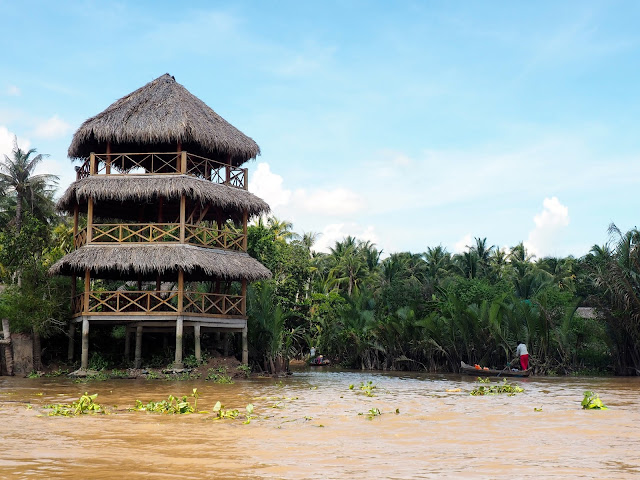 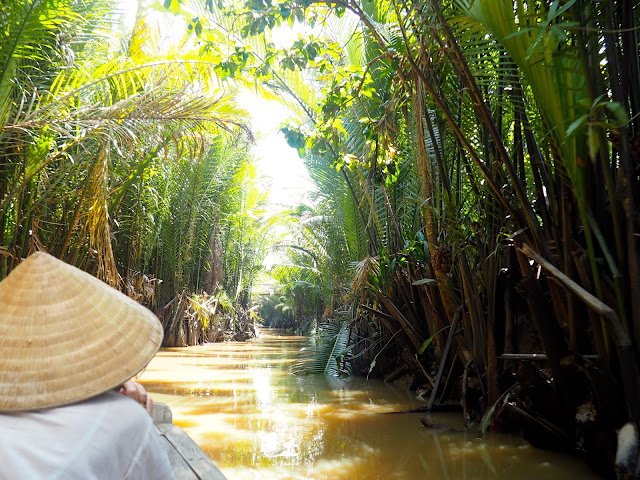 The final part of this tour involved us leaving the big boat behind, and switching into smaller vessels, with 3 or 4 of us in each one. We were then paddled up a narrow stream by local guides (though ours cheated a bit and turned on the engine, so we went a bit faster). I would have preferred without the engine, as it was more peaceful with just the paddling, but it was still a fun experience, drifting through the jungle, with stilt houses appearing every so often, and the foliage stretching overhead like a canopy. There were even some of the traditional hats on board if we wanted to wear them – my picture actually features another member of the group who was wearing one of them. It was only a short ride until we disembarked, where we led to our lunch venue. We had a variety of dishes, courtesy of some other locals, in another sort of pavilion structure, which appeared to be beside their home. The most noteworthy was the elephant ear dish, named because they serve the fish whole and stood upright, so its shape resembles an elephant ear. I’m not normally a fish fan, but made up into a spring roll, and this was quite tasty.

We headed back to the bus to continue on to our destination for the night, a homestay near a small village. My last homestay, in Guatemala, had us staying in the home of a local family, with very basic facilities, and they cooked us dinner to share with them. This was a bit different, as the group all stayed together in a dorm-style arrangement, and all ate together, a meal prepared by but not shared with the family providing it for us. There was even wifi! I didn’t feel like we got to integrate with them like last time, but it was still a fun experience. We had some spare time after arriving, so a few of us went exploring by walking around the roads. These were very narrow, basic roads, alongside tiny canals, and we passed many other houses scattered amongst the foliage, which mostly looked quite basic too, though one or two were a bit fancier. That said, compared to likes of the Guatemalan village, or places in Cambodia (where several others in our group had been just before this trip), Vietnam is a much more developed place in general, with more modern facilities throughout the country. We helped prepare our dinner, by learning how to roll up the spring rolls – some of them ended up looking much better than others, though they all tasted good! – and then some of the group helped to fry them. Our meal was lovely too, with several local dishes served up for us to share, alongside our attempts at spring rolls. We spent the evening amusing ourselves with conversation and card games for the most part, or catching up on journalling and such. 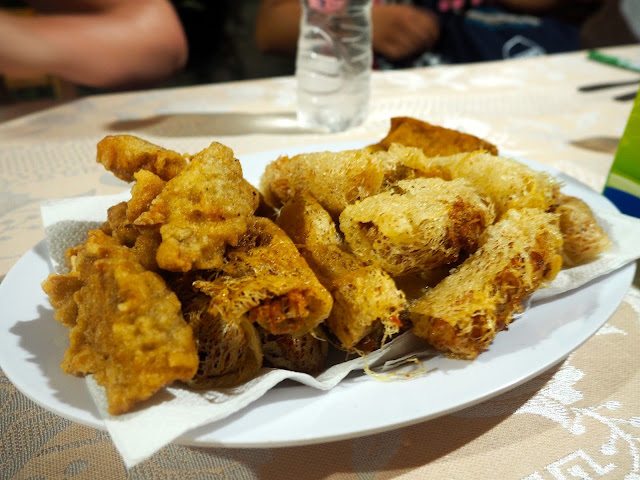 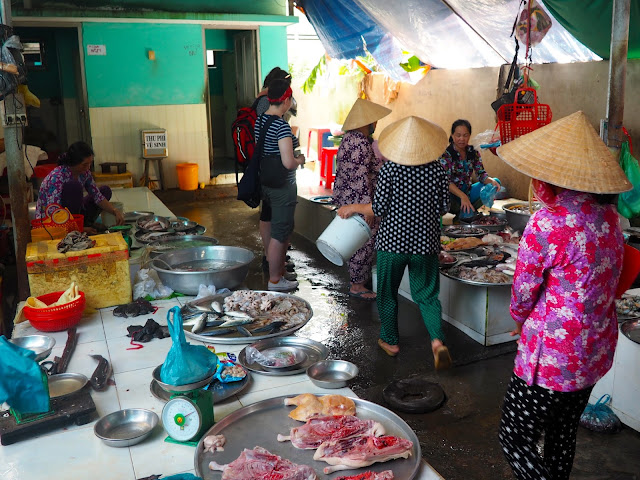 The following morning we were woken up bright and early by the roosters crowing outside. And I mean early. Four am. And I am not a morning person! It wasn’t the worst though, since I did manage to go back to sleep for a little while longer, then we were getting up for around 6.30am anyway, to explore more of the area before leaving. Our hosts provided a fleet of bicycles, to lead us on a cycling tour around the area, which turned out to follow several of the same little paths we’d walked the day before. I’m not the most confident on a bike though, since I hardly ever ride one (it had been around 2 years since the last time I think?), so I was going quite slowly and putting my feet down a lot to make it round the corners, since we frequently had the muddy canals right next to us. One member of the group wasn’t so lucky though, and lost her balance, toppling into the canal! She was able to laugh it off though, and other than a fried phone (not ideal of course, but not the worst that could have happened), she was unharmed.

We wound our way back to the homestay, where breakfast was served, including Vietnamese style coffee. I’m somewhat of a caffeine addict, so I was intrigued to try this; it’s much richer and thicker than what I normally drink in Hong Kong or the UK, and they typically add condensed milk, rather than regular milk. I usually drink black coffee, but this is so rich that I found the milk made it a bit nicer, and I’ve since found that I prefer it iced too, since it’s pretty hot round these parts! After eating, we wandered up to the village, where the market was taking place. We arrived after the busiest time, but the stalls were still open, and it made it easier to look around. Much of it was food, with fresh seafood, meats, fruit and vegetables on offer, alongside some clothes, toys and various other items. Our tour leader gave us her shopping list to buy for her too – all in Vietnamese! I watched more than I took part myself, but we had to go around all the stalls asking, in Vietnamese, for the foods she listed (we didn’t know what they were in English) and haggling down the price. It was highly amusing, both for us and for the vendors I think, but we got everything in the end, though our haggling needed some work. Although it was small market, and not one I would have bought anything from for myself, it was fun to try to interact with the locals, and even just to sit and watch them going about their daily business. It was loud and chaotic at times, but they were also very friendly and open to our attempts at communicating with them.

And then it was time to board the bus and head back up the road to Ho Chi Minh for our last afternoon there (which I already wrote about in this post). Journeying through the Mekong Delta in this way reminded me of why I chose to do a group trip such as this, as there were experiences that would have been too difficult or I would be too nervous to organise and do alone. Although we didn’t stay with families like my last homestay, we got a pretty good look at what life is like for the locals there.