Charlotte Life, Music, Other 2
Happy New Year everyone! I hope 2015 treats you all well. My last post was a look back at 2014, and there will be one soon where I look forward into 2015, but for today I want to share with you how I spent New Year’s Eve. It’s not an occasion that I usually get particularly excited about, as I don’t think anyone’s night ever lives up to the hype they put on it. However, New Year’s Eve – or Hogmanay as we call it – has long been a big deal in Scotland, bigger than Christmas for many, so I thought I’d finally give the Edinburgh Street Party a go. 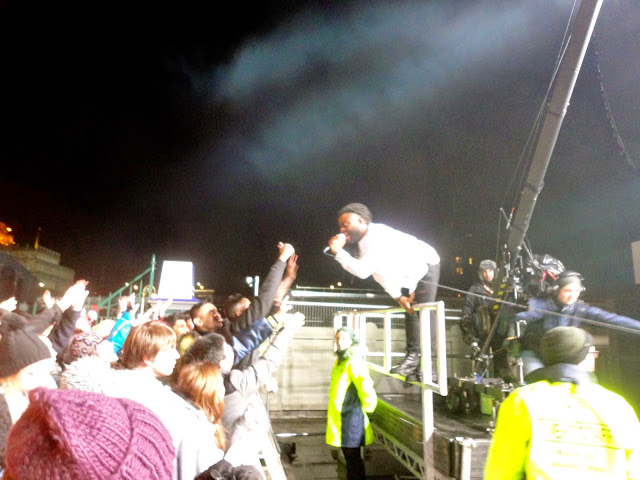 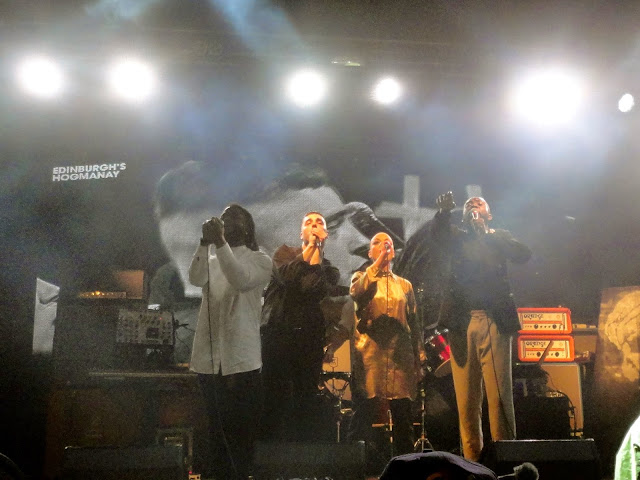 I took my sister, as she had no plans for the night either, and we both love the headlining band, Twin Atlantic. The street party covers all of Princes Street and the surrounding streets, and there’s lots of different stages and things to see. However, I knew the place would be packed, so we opted to just stick to the one stage, which was the Waverley Stage, on the street by the train station. We also arrived earlier than I’d originally intended, which meant we managed to make it to the very front, on the barrier! You can see us in a few of Twin Atlantic’s Instagram photos and it turns out, we popped up on TV a few times, during the Hogmanay Live show and the news the next day! 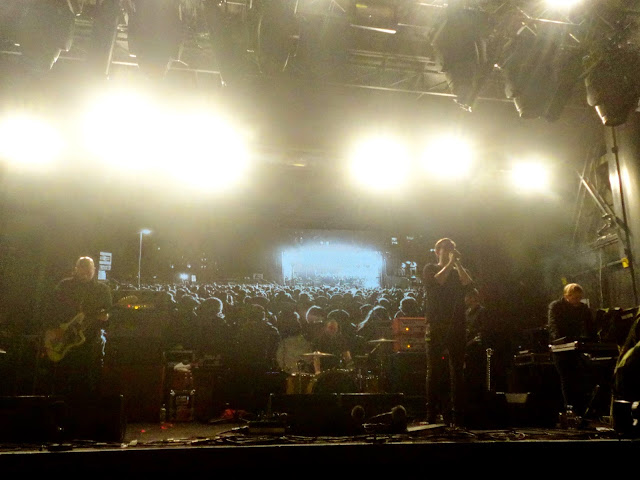 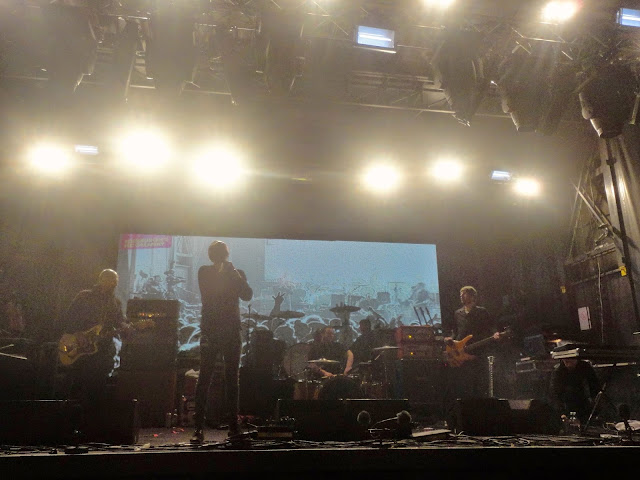 The first two bands on this particular stage were Young Fathers, then The Twilight Sad (both Scottish, as are Twin), neither of which I was familiar with. Young Fathers recently won the Mercury Prize, and while I thought they were pretty good, their musical style isn’t really my sort of thing. They also did a lot of posing on stage and staring out with blank faces, which I found a little uncomfortable – I like it when a band is honest and shows real emotion! Nevertheless, they’ll probably do pretty well in the future. The Twilight Sad were more my thing, and I ended up being a bit surprised that I hadn’t heard of them before. They played good old rock music, which I could really get in to. They also seemed amazed and overwhelmed by the size of the crowd, and I always think it’s lovely when bands appreciate these things. 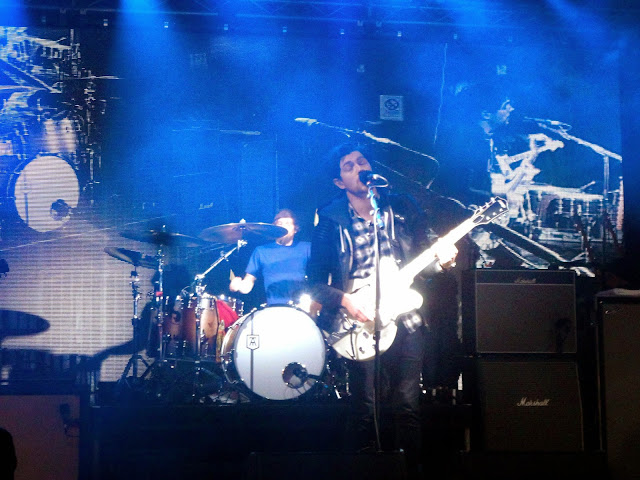 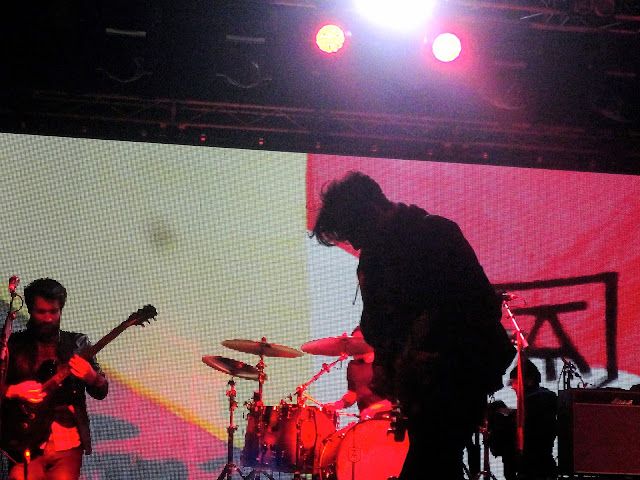 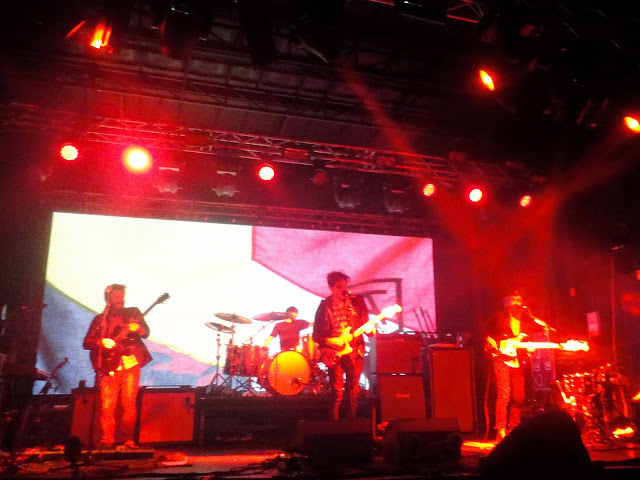 The street party doesn’t just do fireworks at midnight; they let some off every hour from 9pm, to count down to the New Year. I think fireworks are fantastic, so I was a big fan of this. The Twilight Sad’s final song also ran into the 11pm display, which made for a really surreal, breathtaking moment. The midnight fireworks were the most spectacular though, let off from both the Castle and Calton Hill, and lasted several moments. No band was one stage, but Twin Atlantic’s song ‘Heart and Soul’ was played through the speakers, which I thought was a great choice. Afterwards, we honoured the old Scottish tradition of singing Auld Lang Syne (the words were put on screen for the tourists and visitors), which is quite something when there were around 75,000 people at the street party. 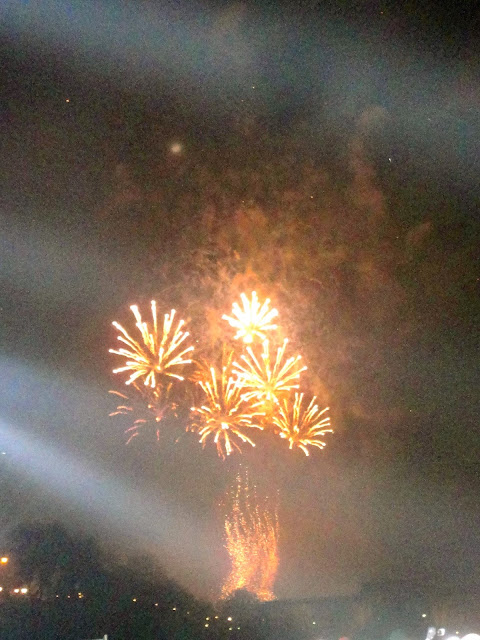 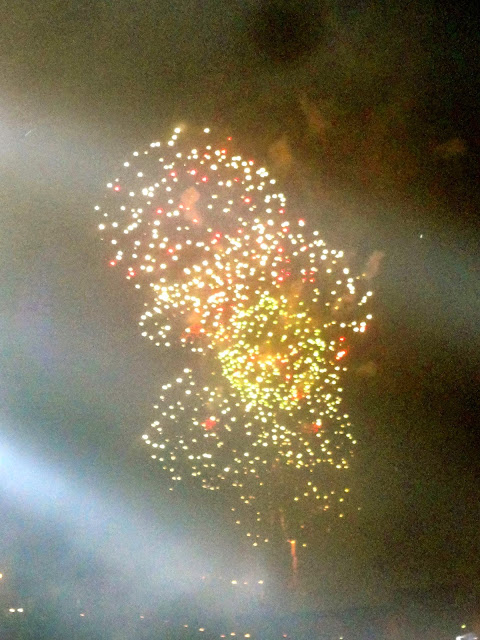 Twin Atlantic were the highlight of the night for me though (as anyone who follows me on Twitter may have guessed…), playing before and after the bells. They’re one of my favourite bands ever, so I’ve seen them live a couple times before, and they never disappoint. Their set sounded fantastic, and was so full of energy and enthusiasm for what they do. The set list had all their well known songs and lots of high-energy tracks that we were all belting out the words too. Finishing 2014 with ‘Heart and Soul’ and starting 2015 with ‘Free’ were excellent choices. I’m not sure how to explain it properly, but they are exactly what a rock band should be, in my opinion. Totally invested in the music and the fans, with no posing or egotism, and playing tracks full of big guitar solos and lyrics that resound with us all. They mixed things up a little with the slower paced tracks, ‘Crash Land’ and ‘Oceans’, and Barry played the cello for these, which is always a fan favourite. Sam climbed down to stand in the front of the crowd (I just got a finger brush, since my sister was inside of me) during ‘Make A Beast of Myself’ before finishing out the show with the quite simply perfect, ‘Brothers and Sisters’. 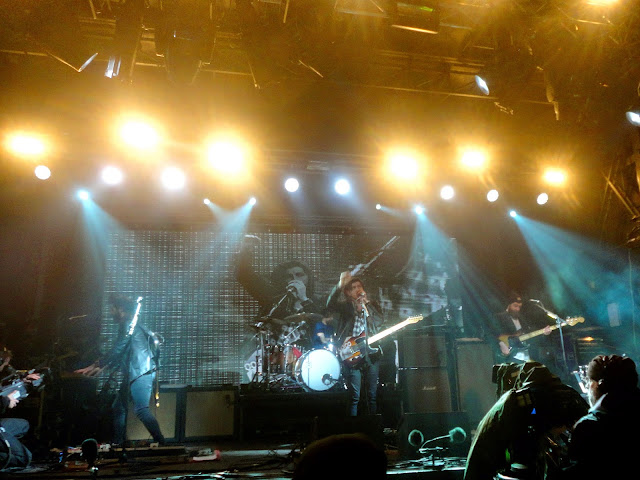 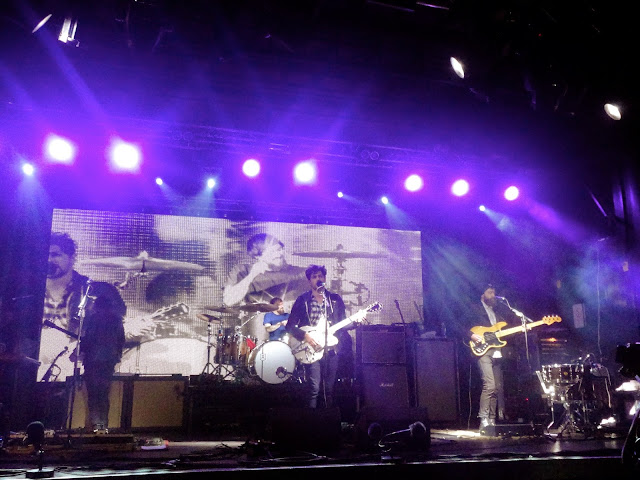 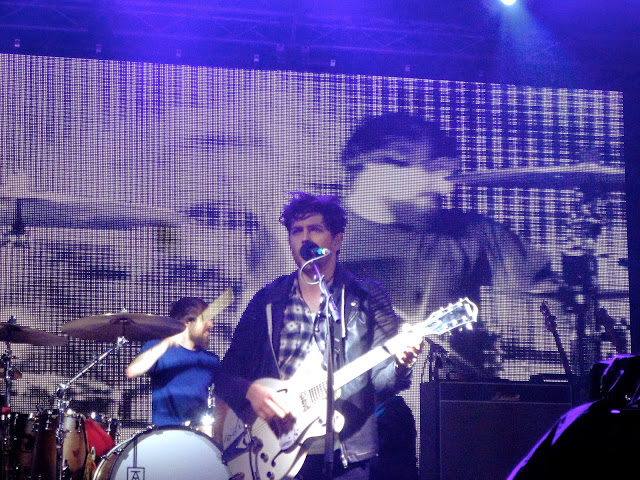 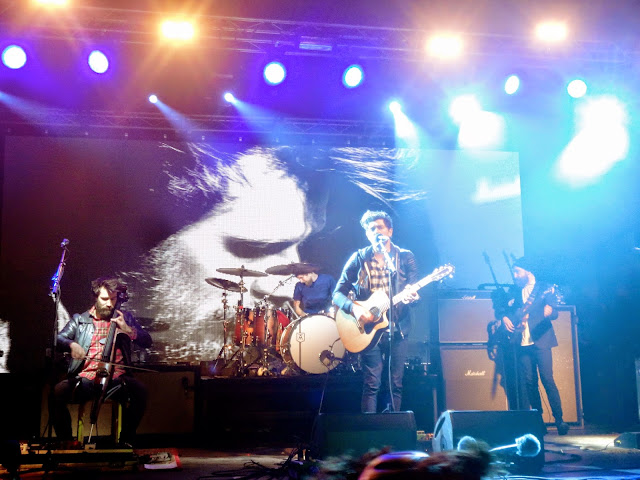 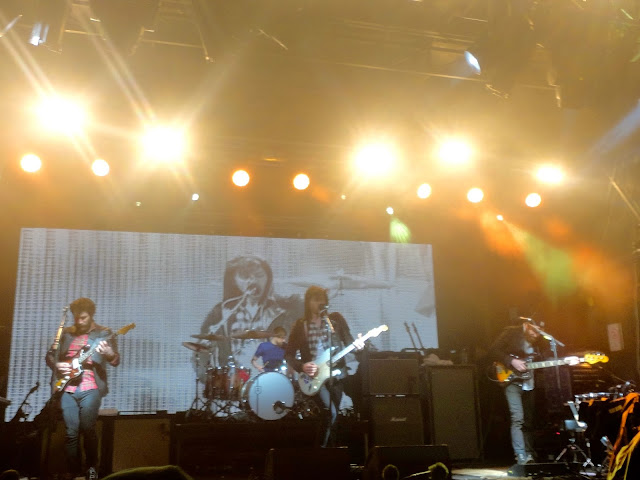 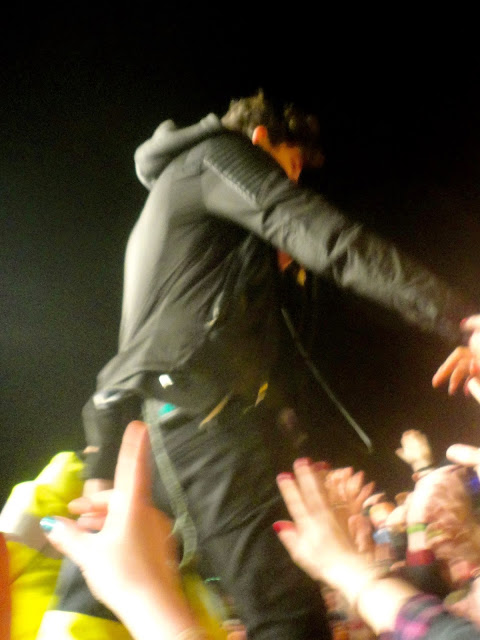 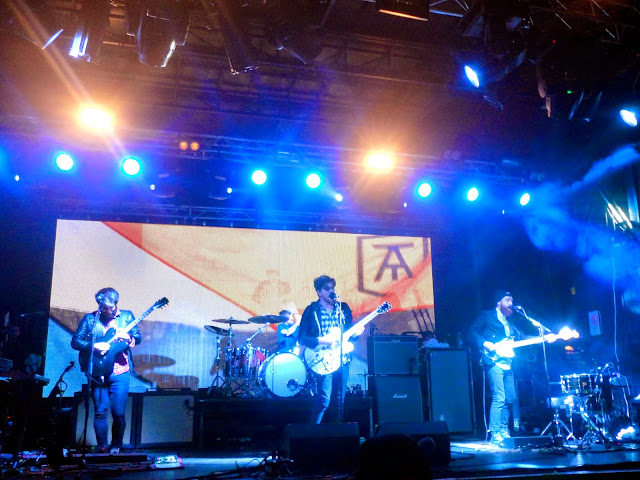 This year’s Hogmanay will definitely go down as one of my favourites ever; does it get much better than being front row for one of your favourite bands? It was unforgettable night of music, fireworks and celebration. Now I can only hope that the rest of 2015 will be as good as it started.
Are you a fan of New Year’s? How did you spend it this year?

Sounds like a fun new year's! Would have loved to see the fireworks 🙂

My Blog – FloralConstellation
My Etsy Shop

Thanks, it was great! They had really good coverage of the fireworks on the Hogmanay show on BBC iPlayer, if you have access.