My first week in Busan has been and gone now, and it’s taken some getting used to. I had thought that since I’ve already lived in Hong Kong – a big, metropolitan Asian city – that Busan would be different, yes, but not such a big change as it was moving from the UK to Hong Kong. And I guess in some ways it isn’t, since I’m dealing with a lot of the same stuff as last, particularly in terms of settling in here. But in other ways, Busan feels completely different to Hong Kong, and where the latter now feels like a second home, the former is entirely alien to me right now. I’m still getting used to my area, and have barely scratched the surface of the rest of the city. I will definitely be venturing out a bit further this weekend, and all my following weekends of course (I hardly have any pictures yet!). All things take time though, I guess.

After I was picked up from the airport on my first day, I was immediately taken to my flat to drop off my bags, and then to the school (where I had to stay for the rest of the day, until 7pm, after flying overnight… ). The apartment is a studio, so I’m living alone, and while it’s not massive, it does the job. It’s bigger than my old bedroom anyway, though the flat as a whole is smaller. I’m not loving it so far, as the gas doesn’t work, the wallpaper is hideous, and the one window is very small and high up (and I’m saying that as a fairly tall person!). It’s provided for free by the school though, and I only have to pay bills, so I’m hoping once I actually unpack properly, put up my pictures and such, and get the gas working, that it will start to feel a little better. It’s a nice commute to the school too – no 40 minute bus journey through traffic this year! – and I can either walk 15 minutes, or take the subway one stop. The subway felt a little confusing at first, since the English signs are not as clear and obvious as those in Hong Kong, but I’ve got a transport card now, instead of buying single tickets, and I’m getting the hang of it now. I’ve yet to try a bus yet, which can often be a little trickier to know when to get off, but I’ll figure it out eventually. My main irritation regarding the subway right now though, is that it’s more expensive than Hong Kong’s MTR, which I was not expecting, given Hong Kong’s reputation for being expensive. I assumed everything here would be cheaper, yet I’m twice what I used to to travel from just one station to the next. I’m hoping other things will be cheaper though (the alcohol is at least, thank goodness!). The school itself is located inside a shopping centre, which is a bit unusual, but quite handy for me, as I could buy most of the things I needed for the apartment (bedding, kitchenware etc.) in the same building. The school is very different to my old job, which is only to be expected in a different country, and with a different age range, but I’ll write more about that another time. 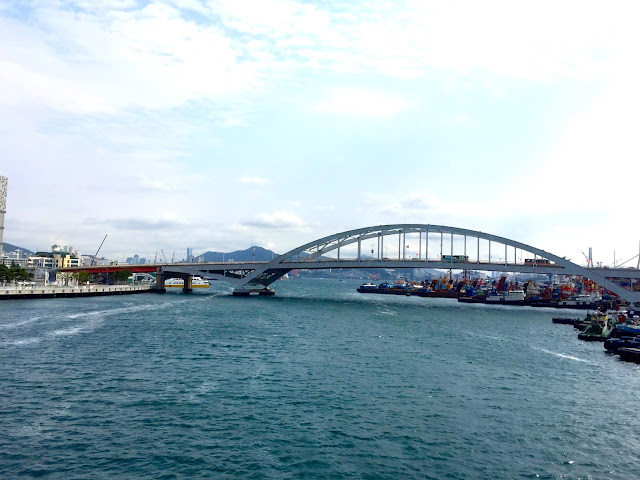 The area I’m living and working in is called Jung-gu, and it’s right by the harbour, and about 20 minutes on the subway to the downtown area (Seomyeon). I assume this will make it fairly easy to get around the city, but I haven’t ventured far yet since I’ve been at work most of the time, and took it easy last weekend. My actual area seems kind of quiet, though that could just be in comparison to the densely packed area I lived in last year, Mongkok. There’s plenty of buildings and shops around, but the streets just feel kind of quiet, especially on my actual street. The main road has lots of traffic though, and the shopping centre I work in gets pretty busy, but it’s all much tamer than Hong Kong was. It is kind of nice to not live somewhere so chaotic though, and I can actually breathe instead of being rammed in amongst the crowds. One thing I will definitely say is it feels less colourful; I feel like all I see is shades of white and grey, and while there are coloured shop fronts and signs, of course, it definitely lacks the vibrancy of HK. I’m also hoping that it’ll be easy enough to get around the city from here, so I don’t get bored, but the subway should have me covered. I’ve noticed other little differences and trends too; the shops, for instance. The streets around me are full of little restaurants and a million cafes; Korea seems to love its coffee, and there are even two chains of French style bakeries (Paris Baguette and Tous les Jours). There is Starbucks of course, and McDonalds, but I certainly haven’t seen as many Western brands as Hong Kong has, but I was aware before moving here that Korea is not as Westernised as HK is, though it does have a degree of Western (particularly American) influence, which I think is inescapable anywhere in the world. Where I’m supposed to buy anything else, I’m not sure (outside of the shopping centre at work). I’ve still got some exploring to do on that front!

The biggest struggle I’m facing at the moment is the language. I never learned Cantonese, beyond a few basic phrases at work, so I saw no need to learn any Korean either. But where in Hong Kong, absolutely everything was written in Chinese and English, and the majority of people spoke at least some English, here, it is nowhere. Everything is written in Korean, with very few English translations, and hardly anyone seems to have much in the way of English language skills. I had to get a health check at the hospital (mandatory for my visa), and had three different nurses trying to talk to me, in handfuls of broken English between them. I’ve got all the relevant addresses I need saved on my phone in Korean, and have downloaded a couple of apps, so I have to keep showing people my phone for them to understand. Going shopping is a stab in the dark half the time, since I’m just going by the pictures on the box. I was trying to buy bleach (there’s a bit of mould on my wall…) and spent a good ten minutes examining bottles for the right Korean phrase I’d already translated. Fortunately most of the Korean staff at my work have decent English, and there’s a few other NETs there (though they’ve all lived here for several years already), but overall i’s definitely making things a bit stressful so far. Apparently the hangul alphabet is pretty easy to learn, since it’s an alphabet, not like Chinese characters, and that can be a good start, but doesn’t mean you actually know the language. But others get by here without knowing much, or any, Korean, and one of the other NETs has been here six years without learning hangul, so there’s hope for me yet! 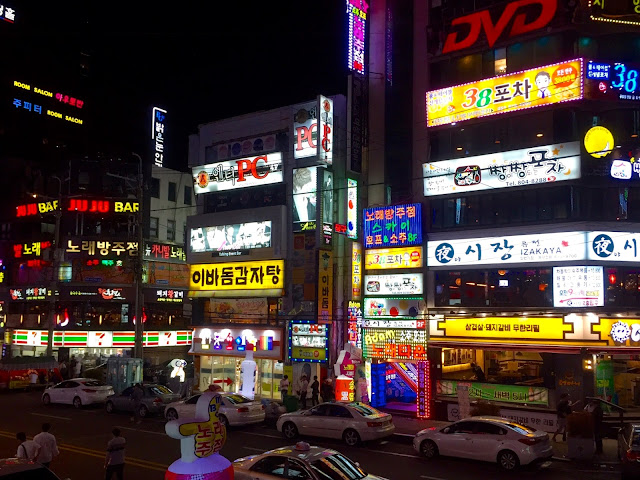 Overall, Busan is not as big of a shock to the system as Hong Kong was. It was so hectic and busy there, especially coming from Scotland, and I was very overwhelmed by it at first. I could barely get my head around jus how many people were there, how closely the buildings were together, and how high they were built. In comparison, Busan feels a bit more relaxed, and a bit more spread out, with more room to breathe (though I eventually found that in Hong Kong’s country parks and beaches). It’s still overwhelming right now though, with the language barrier being a massive concern at the moment, and just having to adapt to a new city. So far I do feel that Busan lacks the colour, character and vibrancy of Hong Kong, but I’m hoping it’s just that I haven’t found it yet, and that I’ll find it out there once I start exploring more. My other concern is that where in Hong Kong I was instantly connected with other teachers who had just arrived there, working for the same agency as me, here there is no such equivalent. And I hate having to go out and meet people… I guess I’ll have to give it a try though, especially since my friends in Hong Kong were a massive part of why I enjoyed my time there so much. There’s plenty of expats here too at least, though there doesn’t seem to be many in my particular area. Anyway, I’m not sold on Busan so far, but I’m definitely open to giving it a chance. I hated HK for the first few weeks, and wound up absolutely loving it – it’s definitely been hard leaving it, on top of continuing to miss Scotland. It’s a new adventure though, which was the whole point in moving here, so I’ll just have to wait and see!