So, my trip to Hong Kong started off with a bundle of nerves and anxieties, complete terror, and several tears – come one, moving halfway around the world is pretty daunting! However, one of the brightest moments that day came when I was in Dubai airport, catching my connecting flight. I got to the gate, handed over my boarding pass, and watched the steward promptly rip it, before handing me a new one, with the magic word ‘Business’ at the top… No explanation given, but I didn’t really mind! I’ve never flown business class in my life before, so getting an unexpected free upgrade was quite the treat! 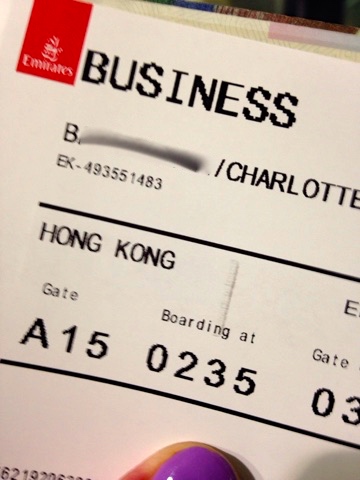 I snapped a few photos with my iPhone, which don’t really capture the whole experience, but hopefully can give you some indication! I was flying with Emirates, and the flight from Dubai to Hong Kong was on an Airbus 380, and I was already excited about that, having never been on one of those before! My newly upgraded ticket meant I could board at any time, though I still got stuck in a clamour of people who hadn’t quite understood the concept of boarding when your group was called… Anyway, once I got on board I was directed up to the top deck, which immediately seemed more luxurious than the economy seats downstairs – which are already pretty nice on an Airbus! The seats in business though are amazing, with plenty of space to stretch out, and are fairly private (especially since I had a window seat), so no irritating neighbours for 8 hours! There’s also the personal entertainment system, with comfortable headphones, and the choice of the touchscreen, remote control, or tablet to control it, and over 200 channels to choose from. The seats recline the whole way, there’s heaps of luggage storage, a small mini-bar, as well as access to the small bar and lounge at the back, a blanket and pillow, and option of a mattress, and a complementary bag of toiletries… and probably more I’ve forgotten about now! 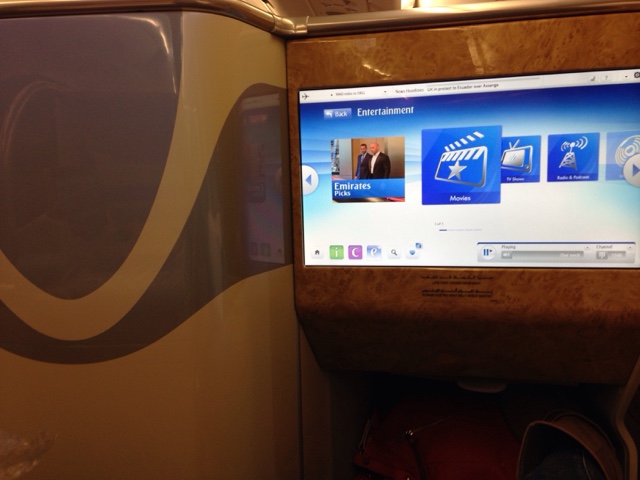 We were actually delayed in leaving for nearly an hour, but I didn’t really mind, with all of this luxury to take in! I was served a drink almost straight away, champagne of course (though I was trying to avoid most alcohol, in an attempt to beat jetlag), and a steward came to explain how everything worked, and give me the menu to peruse. I settled in to watch Ex_Machina first, which was a little freaky, but overall very good, and towards the end I was served my hot snack. It was some Asian dish that I can’t remember the name of, but was tasty! It was such a novelty to have real cutlery, and be given a meal that wasn’t in a plastic container on an airplane, but the tablecloth and salt & pepper shakers were just something else! After the film, I tried for some sleep, since it was an overnight flight, and I wanted to make the most of fully reclining seats. The noise of the plane was a bit irritating, even with the ‘noise-cancelling headphones’, and I only dozed in and out a bit, but it was probably more than I’ve gotten on a plane before. I had been given a breakfast order card at the start, so you could choose whether you wanted to be woken for it or not. I was making the most of all this complementary food (having flown Easyjet more times than not, and having to pay for every last extra), so I had ordered the full meal with omelette. I woke up somewhat blearily, and although the meal looked great, I couldn’t seem to eat much of it. Perhaps ordering five hours in advance doesn’t really work? Anyway, I had just enough time left to watch another film – Horrible Bosses 2 – though I kept drifting in and out a bit, snuggled into my pillow. 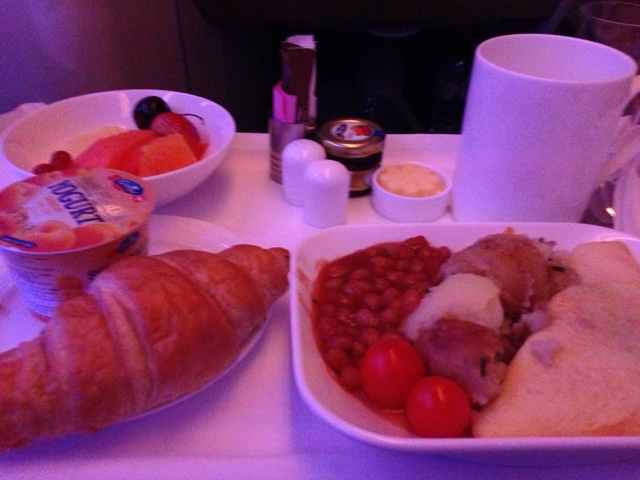 For possibly the first time ever, I was a bit disappointed when we landed, as I had been so comfortable! I was also too tired to want to deal with the faff of airports, after travelling for over 18 hours by then. Anyway, it was definitely a memorable way to start my trip, and a nice little pick-me-up after my initial bout of nerves at the start of the journey, which I was certainly grateful for. My only problem now though, is how will I ever face flying economy again?!