Lyrics To Live Your Life To

Charlotte Music, Other 1
I believe the music people listen to can tell you a lot
about them, who they are, who they want to be, who they perceive their self as
or who they think others perceive them as. In particular, the lyrics show a lot
of characteristics and traits. They may have been written by someone else, but lyrics
resonate with people, reaching out to them through shared experiences and
emotions. These are just some of my favourite lyrics. There’s probably a lot
more that I like, I just can’t remember them all right now. I’m not sure what
all of them say about me, so take from them what you will.

This is the anthem for a dying breed

Caught up to realise that I’ve been left behind

Holding on to promises and trusting a few

We were the kings and queens of promise

These lessons that we learned here have only just begun

Time to give them what they’re waiting for 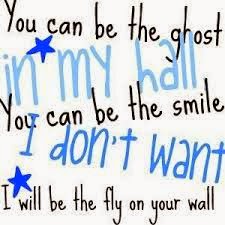 We are lovers lost in space

She had the most amazing smile

You never got to heaven but you got real close

I’m the option you shouldn’t have chosen

Life’s a bitch but I’m friends with her sister

I smile at all my enemies; I lead a life of positivity

I’m married to the music, for better or for worse

We are just the sinners, we’re condemned to death

You can’t edit me

You won’t get better than me

You were fake, I was great – nothing personal

Long live the reckless and the brave

We try to run away but end up running back

Don’t hold your breath; I’m not losing sleep over you

Good luck with killing time, you won’t be killing mine

I’d rather be anywhere but here without you

I’ve got real big plans and such bad thoughts

I’ll never know divinity; so inadequately I write in meter
and verse

Falling in love for the night

Young and in love; that should be enough

Down but not out

Go back to anything, cos I know you’ll think of me

I’m over getting older

This is my reaction to everything I feel

When it all comes down to a sunrise on the east side, will
you be there to carry me home?

We ran like vampires from a thousand burning suns

We raced the sunset and we almost won

The surface shines while the inside rots

Your voice was the soundtrack of my summer

You can be the distance in between; you can be everything I
need

Jealous minds are thinking alike, but you’re my damn damn
tie wasting all my time; you are in love

Throw it away, forget yesterday; we’ll make the great escape

The answers that we’ll never find; they don’t mean a thing
tonight

If we stand for nothing, we’ll fall for anything

I’ll do my best to always be on your mind

No one is looking for you anymore cos that was us

We’ll be the leaders of a messed-up generation

You’re not on my list of things to do, cos I’ve already done
you

Your favourite enemy and your most hated friend

Sometimes fate and your dreams can collide

You’re just a daydream away

It was your world baby and I just lived in it

i love the pictures 🙂 and i love the little intro at the top of the page 😀
Here's mine if you wanna take a look 😉
http://mustbebeautiful.blog.com