Well it’s the last day of 2018, so time to look back on the year! I quite like doing these annual reviews, just to pause and take stock of what’s been going on in my life, and see if I’ve maybe achieved anything this year! Compared to the last few years, this one has been slightly less eventful, as there was far less travelling and far less moving than there has been. That could make it a slightly more boring year, but a fair amount has still happened! 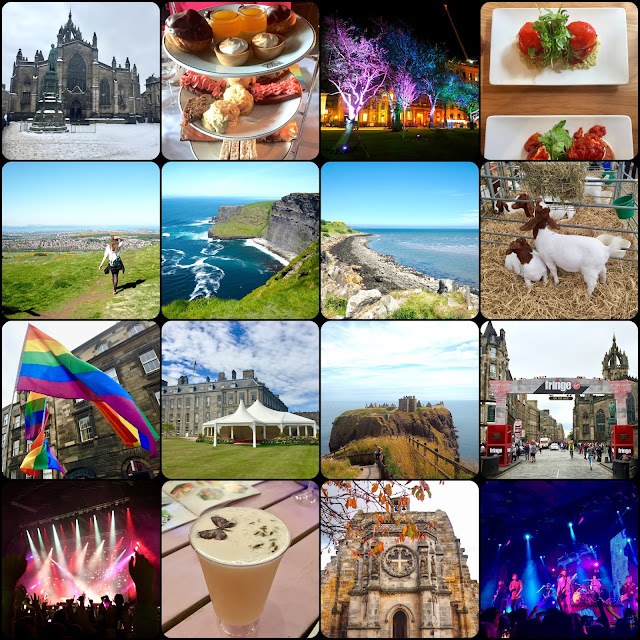 Just a couple of days into 2018, I moved into a new flat after staying with my parents and then a family friend prior to that. I’m still in that flat, which is quite unusual – I think this is the longest I’ve stayed in one place since I left high school! And it was my first time living with flatmates in a couple of years, which took some adjusting to at first, and we’ve had a few changes of flatmate since January, but overall I get on really well with the people I live with, so I’m happy with the situation for now! I continued working as the meeting point coordinator and pub crawl leader for a tour company, which I’d started back in December. At first I was also doing waiting and bar shifts through an agency, but I gave that up around February.

The company was good in that I met lots of people, other tour guides and staff both in that company and some of the competitors, and some of them are now very good friends of mine. Moving back to Edinburgh, I only had a couple of old friends still in the city, so it’s been great to make some new ones, and I’ve had lots of fun times and adventures with some of them – and probably a few too many nights out! March wasn’t the best of times though, as my Granny passed away during those terrible snowstorms, and I had to take time off work just after my birthday to go home for the funeral. She was in her 90s, so it wasn’t exactly a shock, but it was still a difficult and sad time for the family.

Then in April, I started working as a tour guide for the company, leading free historic and ghost walking tours around Edinburgh’s Old Town. Compared to when I was a teacher, I really like doing this, and while I won’t do it forever, I’m pretty happy doing it just now. I carried on working for that company up until July, when two of the Spanish guides, who are good friends of mine, decided to start up their own tour company, so I left with them to go work as their English guide. That’s kept me pretty busy, especially in the second half of the year, as I’ve been working more shifts (with smaller groups) than I used to, but I’m not too exhausted yet! I much prefer working with them, since we get along so well, and it was exciting to launch the company, and now watch them growing it.

I only managed one trip abroad this year – way down on the last few years! – which was a five day break in Dublin back in May, including a couple of day trips around other parts of Ireland. I think all my travelling has made me appreciate what’s on my doorstep more, and I’d never been to Ireland before, despite it being so close to Scotland. I’ve seen and done lots more in Scotland than I ever had before as well, using my days off to visit museums or go hiking or go on day trips to places near Edinburgh! I also spent a couple of days visiting my cousin in Dundee, and stopped in St Andrews and Stonehaven as well. Going home last week for Christmas was actually my first full days off since that trip, having been so busy with the new company! I’ve been to plenty of other events and concerts and such as well (many linked below!), plus it was my first time back for the Fringe in a few years. So although I’ve mostly stayed in Edinburgh, I’ve still seen and done a lot!

In terms of my goals from the start of the year, as usual, some worked out better than others! My year started working in a bar, and I joked that that meant work and alcohol would be the main focus if the year – and that’s been quite true! I’ve worked loads, and spent many a night partying! I’ve definitely been better at keeping up with yoga, and I’ve started a new second blog to write more, though I still haven’t read as much as I’d like to. In terms of the big goals, of figuring out my life and not stressing about it, I think I’m getting there. I won’t do this job forever, but I do enjoy it so perhaps tourism could be a potential avenue to explore. I’ve been more accepting of where I am this year though – I thought I’d perhaps only come back to the UK for a year then head off elsewhere again but I have a good job, a good living situation, and great friends, so I’m in no rush to upend all of that.

So I still don’t have solid future plans, but I’m a little less lost and a little less stressed about that than I was a year ago, which is progress for now! Right now, I’m happy with where I’m at. It’s not perfect, and there will come a point when I’ll be ready for something new or something more, but for now, I’m good. Just muddling through life has worked for me so far, so I’ll keep on doing that until I figure things out!