During the 19th century, the University of Edinburgh’s medical school (first established in 1726) became known as one of the best in the world, and around that time many great pioneering doctors lived and worked in the city, and made many great advancements in the medical field. Their legacy is remembered in the city’s medical related museums, both of which I visited for the first time this year. Surgeons’ Hall was initially a teaching resource, and is now open to the public as a paid entrance museum, housing an exhibition of the history of surgery, and hundreds of pathology specimens, while the Anatomical Museum is still used by current students in the Old Medical School building, and is only open to the public once a month, for free. 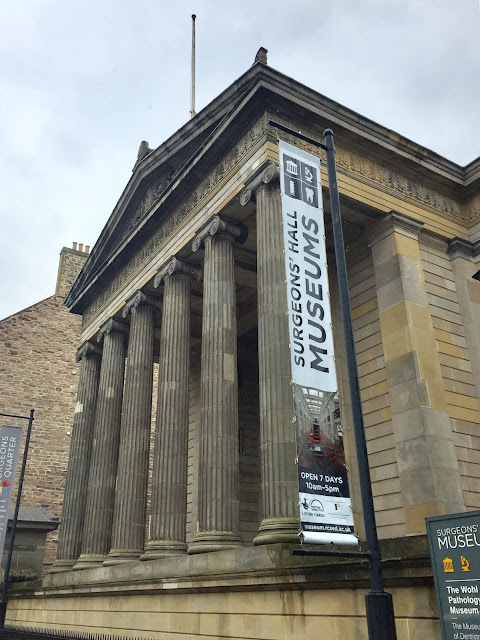 Located on South Bridge, this museum is one of the oldest in Scotland, with its origins dating back to 1699, when the collection of ‘natural and artificial curiosities’ was started as a medical teaching resource. It moved into its current location, the Playfair Building, in 1832, and later opened to the general public – I visited a couple months ago, so I don’t remember every detail of everything I saw inside! The building was also used for exams in the past, and is particularly famous for its connection to the Edinburgh Seven, the first women to be admitted to the medical school, and who were prevented from sitting an exam in the building, due to riots outside.
There are three main sections to the museum (note that photography is not permitted in any of them, due to laws about the display of human remains), starting with the History of Surgery exhibition, which shows how the science was advanced over the years, particularly with Edinburgh’s contributions. There are displays of many old medical instruments, no longer in use thankfully, and the centrepiece is a mock anatomy theatre, where projections are displayed on a plastic cadaver, reenacting a dissection.
Amongst the notable figures featured are; Joseph Lister, who developed antiseptics to sterilise medical equipment; and James Young Simpson, who discovered the use of chloroform as an anaesthetic. There are also links to other famous figures, such as; Joseph Bell, who was Sir Arthur Conan Doyle’s inspiration for Sherlock Holmes, after he studied medicine in Edinburgh; and William Burke, the notorious serial killer who sold bodies to the medical school, and then was, ironically, dissected himself after being caught and executed – the museum has his death mask and a pocket book bound in his skin!
The next section is the Dental Collection, which explores the history and development of this branch of medical care. There’s plenty more instruments on display here – as someone who isn’t a fan of trips to the dentists, this did make me a little more squeamish than the previous area! There’s also many paintings showing dental procedures, and you can find more paintings throughout all the areas of the museum, showing medical conditions, injuries, surgeries, and more… some of which are pretty graphic! This area is the smallest of the three, so took the least time for me to explore.
The third and final area is the largest, although there isn’t as much to read as in the History of Surgery rooms, so I probably spent similar amounts of time in both. This last area is the Wohl Pathology Museum, which houses hundreds of tissue specimens preserved in glass jars and cases, on dozens of shelves lining the two floors of the room. It’s a fairly impressive thing to gape at, seeing just how many specimens there are in here! You could spend hours poring over each individual one, reading all the descriptions, but I did a quicker, more general sweep! The cases are sectioned off by field, such as cardiology, neurology, gastroenterology, orthopaedics etc. Many specimens show conditions, problems, or diseases affecting that organ or other body part, some of which produce very alarming results. Near the exit, there are some particularly unusual specimens showing rare, usually genetic, conditions. There’s also one side of the room specifically dedicated to battle wounds, and shows the history of field surgery, including instruments used, and more painting of specific war wounds.
The pathology collection, in particular, is not for the faint hearted or the squeamish, as many of the samples are pretty graphic – I was doing ok until I got the foetal specimens, which are heartbreaking to see. However, I can appreciate the value in all of this for those learning about medicine and the conditions that affected these people. It’s a pretty interesting place, especially to see Edinburgh’s contributions to the science, and definitely one of the more unique museums I’ve been to!

The University’s Anatomical Museum usually opens to the public on the last Saturday of each month – but it’s always best to check their website to make sure – as it’s largely still a study space for current medical students. It’s found inside the Old Medical School, just off Bristo Square, and they signpost the way quite clearly for the public on the open days. The collection includes over 12, 000 items collected over the course of several centuries, but only a small selection are on display. 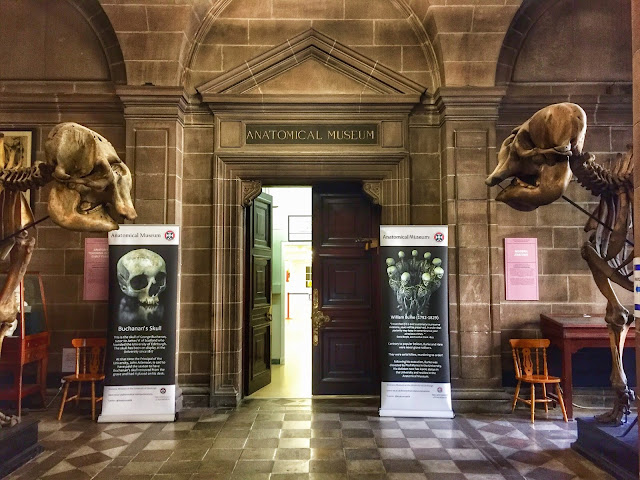 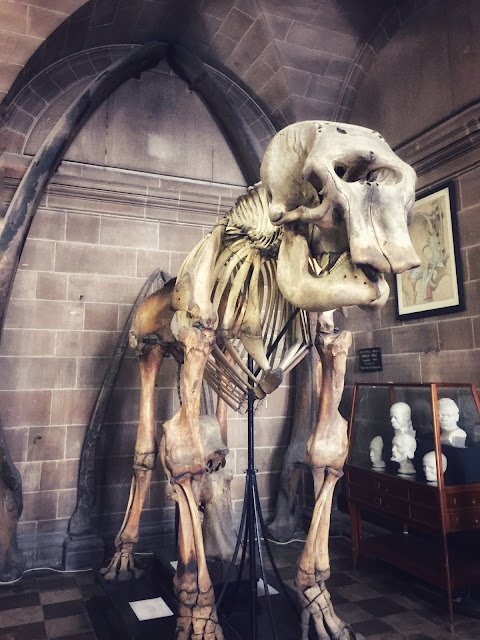 Firstly, you have to pass through the entrance area, before heading upstairs to the main room. This area is the only part where photography is allowed, due to those same laws concerning human remains in the main room. It has several busts of famous medical figures, including many of the same ones featured in Surgeons’ Hall, as well as a book containing the names of people who’ve donated their bodies to science over the years. The most prominent things in this room, though, are undoubtedly the two elephant skeletons flanking the door. They’re suitably impressive, given their size, and quite daunting to walk past. There’s also a whale jawbone on the wall behind one of them – these sorts of animal bones were collected a long time ago, and are used to show the differences between skeletons of other species.
The main room isn’t as large as I was expected, and there are several corners of desks and computers, since it’s a study space. However, most of the room is occupied by wooden cases containing the artefacts, which include both real and model specimens for students to learn from. Along the left wall, the cases mostly contained organ samples, while the central channel features bone models, often showing the changes as people age over time, and medical instruments. There was an interesting case near the entrance that shows musical instruments made of bones, a practice found in other cultures around the world. One of the most striking items was in the middle of the room, a body preserved with mercury, that had been dissected back in the 18th century!
Along the back wall is a display about the study of phrenology, a largely discredited science of the past, which thought the the shape of the skull reflected the shape of the brain, and could tell us about people’s personalities. Although the science is mostly nonsensical – the only truth is that different parts of the brain do control different things – it is pretty cool to see all these reconstructions of famous people’s faces, from different subject fields. There’s even a model of Robert the Bruce’s skull, and a reconstruction of his face, created after his remains found buried beneath Dunfermline Abbey during renovations in the early 19th century (he was then reinterred!).
The right wall displays some more models of various muscles, organs, and other body parts. Students are able to take the models out of the cases to study from, so it’s a good teaching tool for them, but the replicas were less interesting to me than the real specimens. There are also many animal skulls and bones along this wall, again, to showcase the differences between species. Some of these are staggering in their size – imagine the vertebrae of a giraffe or a whale! – or have incredibly unique structures, like in the wings of a bat.
Then we found the most exciting specimens in the whole museum: firstly, the skull of George Buchanan, who was the tutor of James VI. I hadn’t really heard of him before, but this skull dates to being over 400 years old, so I thought it was pretty mind-blowing to be looking at a part of someone who lived so long ago. And then, of course, the skeleton of William Burke (the same one featured in Surgeons’ Hall). After he was executed and dissected, it was ordered that his skeleton be put on display in the medical school, so it’s now been here for almost 200 years. A brilliantly ironic fate. I tell the Burke & Hare story on my ghost tour most nights, so it was insane to see the remains of that very person!
The Burke skeleton was the main reason we went, but the other artefacts were interesting too. Surgeons’ Hall is definitely the bigger of the two, with more things to see, and more information about the history of medicine, but the Anatomical Museum definitely has a few unique things you won’t be able to see anywhere else!