We’ve had such beautiful weather in Edinburgh over the last few weeks, so of course I’ve had to go out and enjoy it as much as possible – this is also when I’m really happy to have a job working outdoors! But on my days off, I’ve been lying on the beach or in the park, or exploring new walking routes. I chose to do this route, also known as the Dalmeny Shore Walk, from Cramond to South Queensferry, passing through Dalmeny Estate, since it’s a coastal path, allowing me to be near the ocean and see some gorgeous beaches along the way. It’s part of the John Muir Way, as indicated on some of the signage, but it’s not a rigorous hike, as it’s mainly level ground, with little to no uphill, so it’s really more of a walk, but it does take almost 3 hours, so that’s a good workout! 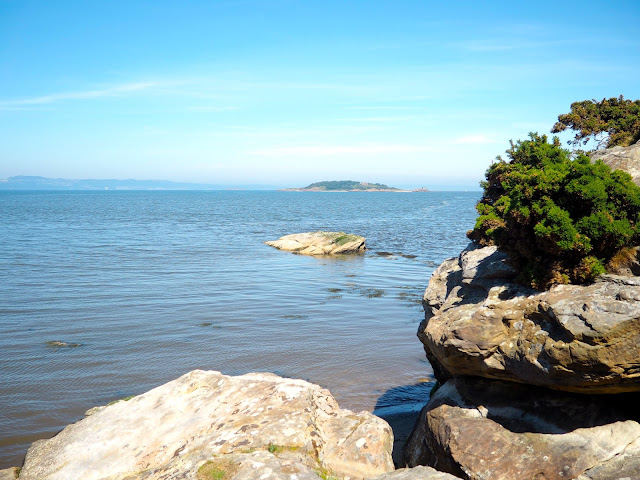 It’s a linear walk, which can be done in either direction, but I started by taking the bus (43) and getting off at Cramond Brig. This is near the main road, rather than down by Cramond village and beach, so the first part of the route is a country walk, past fields and woodland, down towards the coastline. It’s pretty easy to find the path, as there’s cycle signs – it points to South Queensferry on two of them, but the one with the shorter distance follows the main road, so instead you have to follow the longer one, to get down to the shore first. It was about half an hour to walk this portion, and it was all beautifully sunny and pretty easygoing the whole way. It emerges on a beach just west of Cramond, on the other side of the River Almond, which reaches the sea there, and I could see Cramond Island and the walkway leading there, where I was just a few weeks ago.

The main walking path winds through some woodland, heading west from that point, but there is a little detour just a bit further up, where you emerge on another patch of beach, and there you can see Eagle Rock. This is a carving of an eagle in a rock there, which is believed to date from when there was a Roman garrison in Cramond, though this is unconfirmed, but Historic Scotland keeps the carving preserved. You can also then climb up the side of this rock, where there is a stunning view over towards Dalmeny House. The historic house is across the bay, and the water was so bright and blue that day in the sunlight. As well as the house, there are also several other cottages around the estate, as well as a golf course and much farmland – even the country walk as I came off the bus is part of the estate, but although privately owned, it is open for the public to walk through, save for a few fenced off areas closest to the house itself. 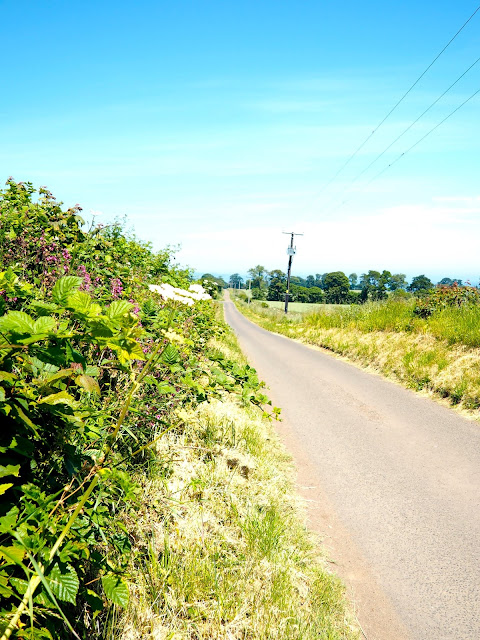 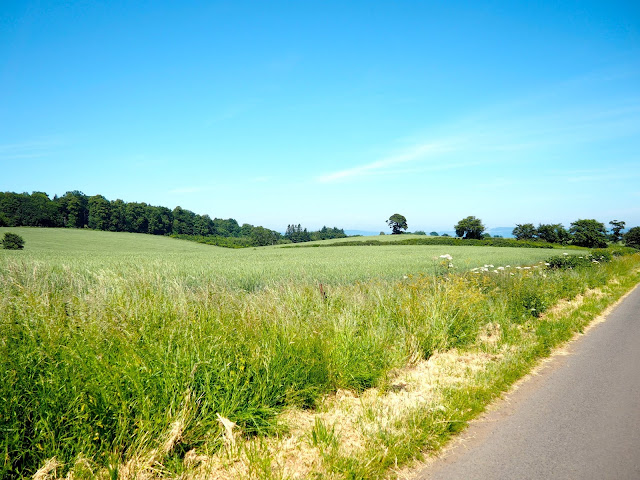 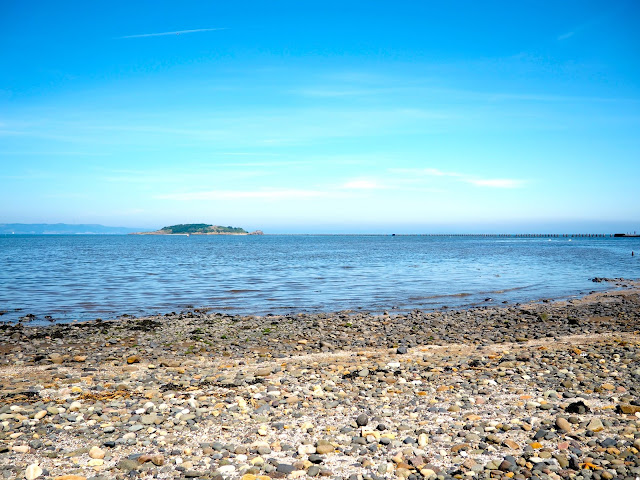 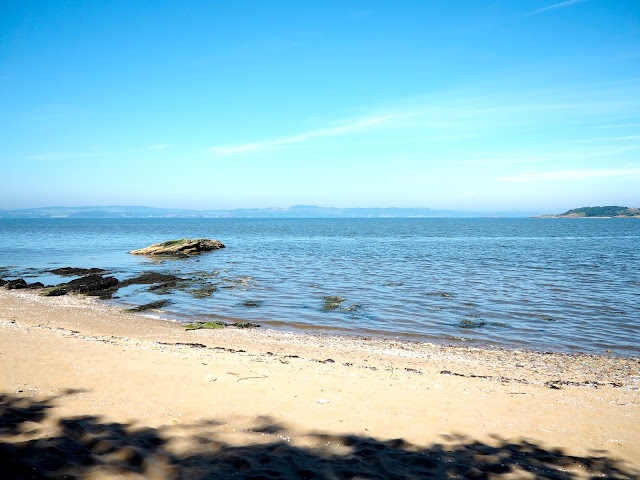 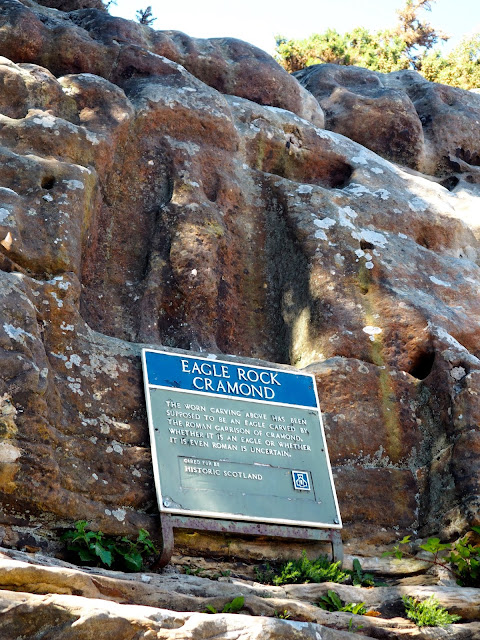 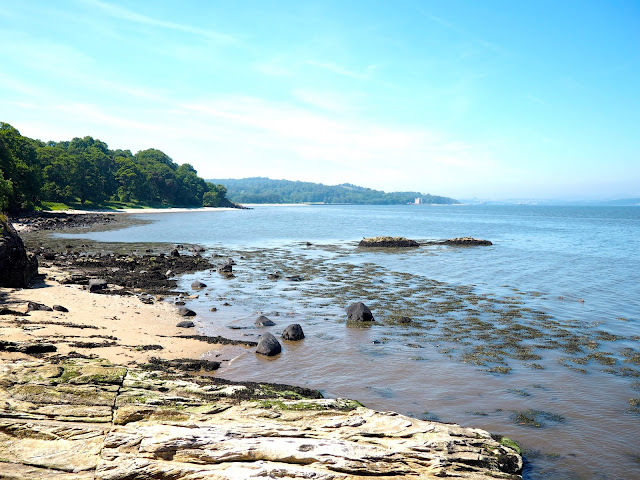 I returned to the main path, in the forest, and followed it a bit further – it continues on through the woods, curving around the bay. However, I ended up climbing down the banking through the trees, to reach the beach that I had just been admiring from Eagle Rock. There’s loads of shells here, not just sand, so it’s pretty, but a little uncomfortable to lay out on I imagine. However, it was such a hot day that I ended up taking my shoes off and walking the length of the beach in the shallows of the ocean. This is the Firth of Forth, which leads out to the North Sea, so even in summer, the water is pretty cold, but it was fine for just having my feet in. As it was a weekday, the walking path had been pretty quiet for me so far, but there were a few others around, however, I seemed to be the only person who thought to go down onto the beach, so I had the whole thing to myself! It was so beautiful and peaceful and quiet – often I listen to music when walking, but I actually opted to enjoy the silence here instead.

My timing was also perfect though, because just as I reached the other end of this beach, and was putting my shoes back on to return to the main path, the haar (a specific type of coastal fog that forms in the North Sea, around Scotland and northern England) came rolling in over the Forth. Visibility decreased dramatically, as Cramond Island disappeared, then Dalmeny House, and soon I could only see a few metres out to the sea. The good news though was, at this point, the path took me around the edge of the golf course, and then moved inland, and then I had no option to walk closer to the coast, as this is the private area fenced off around Dalmeny House, so at least I wasn’t really missing out on any views here! I simply continued ambling my way through the woodland, keeping my fingers crossed that the haar would lift again when I got to more coastal areas. 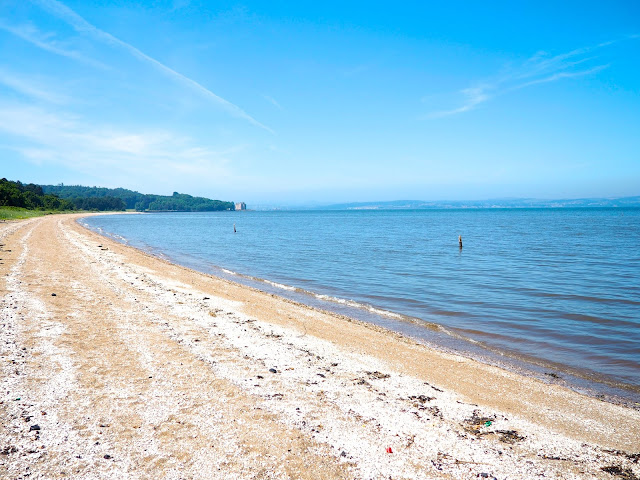 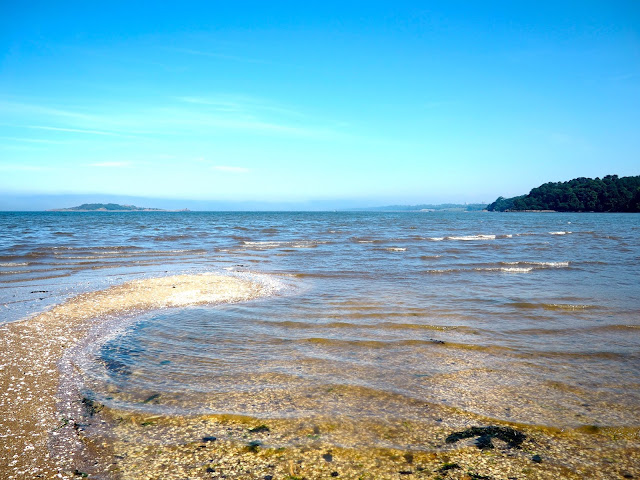 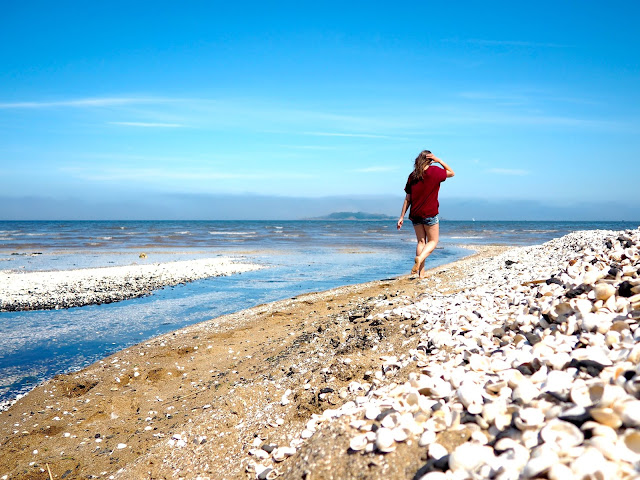 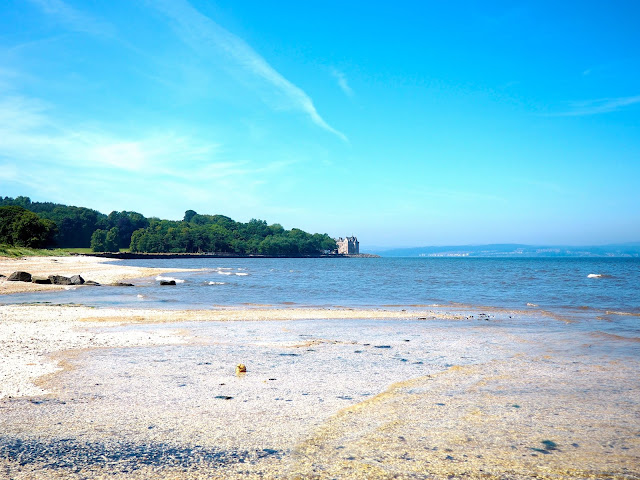 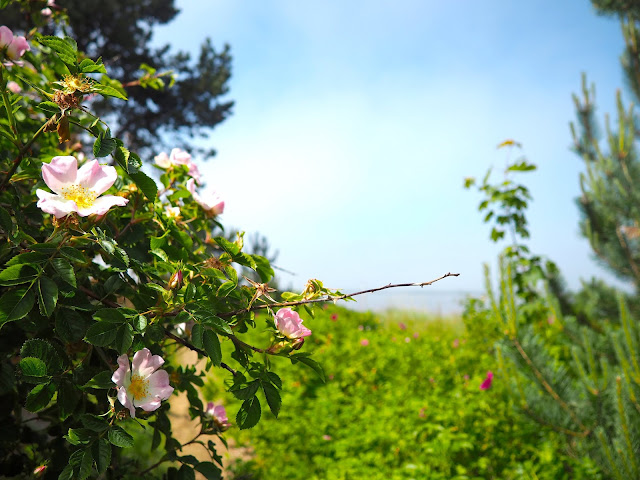 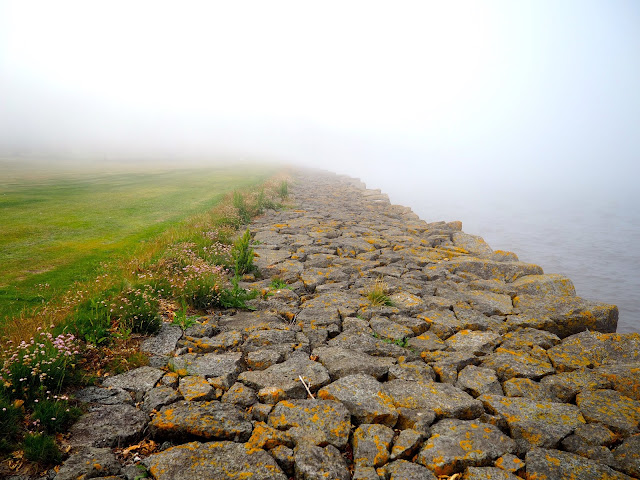 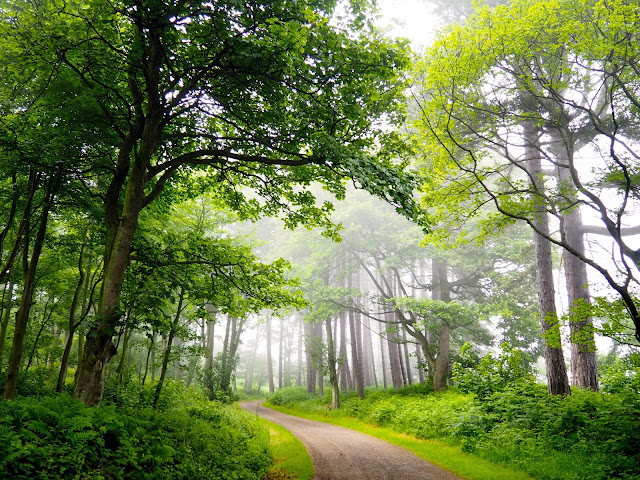 Eventually I reached Hound Point, a small detour from the path to an area of headland, where I could see more beach to the west, and in the distance I could faintly see the outline of the Forth Bridge (the railway line, and first of the three Forth Crossings). The view from here would have been far more impressive in clearer weather, and I did pause to sit here for a while to see if conditions would change. The haar did start to lift slightly, but it was slow going, so I decided to continue on anyways, and hope I would see more as I got closer to South Queensferry. I went through the woods a little more, then crossed back over to the beach shortly after, when I could see the sun starting to emerge again.

I made my way round, over sand and rocks this time, opting not to get my feet wet again, and slowly but surely, the Forth Bridge began to emerge, and I was actually able to get some pretty cool, atmospheric shots of it, half in and half out of the fog, with a few oil tankers making their way through the Forth as well. I continued around the coast, following the beach, and eventually over a rocky outcrop, overlooking the bridge, which was becoming more and more visible as time went on. I prefer the angle just under the bridge for photos, with Inchgarvie Island next to it. The beach eventually led back to the main road, and passes under the bridge itself, finishing up next to Hawes Pier, where boat trips around the Forth depart. There are buses around here, but I find with my timings that the best option was to head to the Dalmeny train station – which can be reached by following the pedestrian signs, directing you up the hillside on a flight of stairs, to reach the platform – from which it’s just 20 minutes back into the middle of Edinburgh. 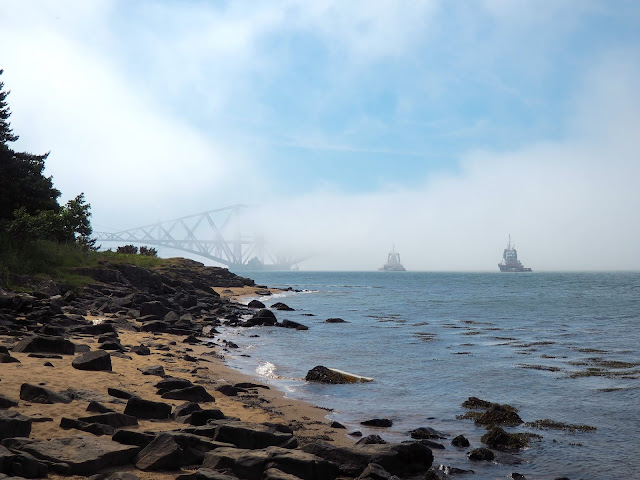 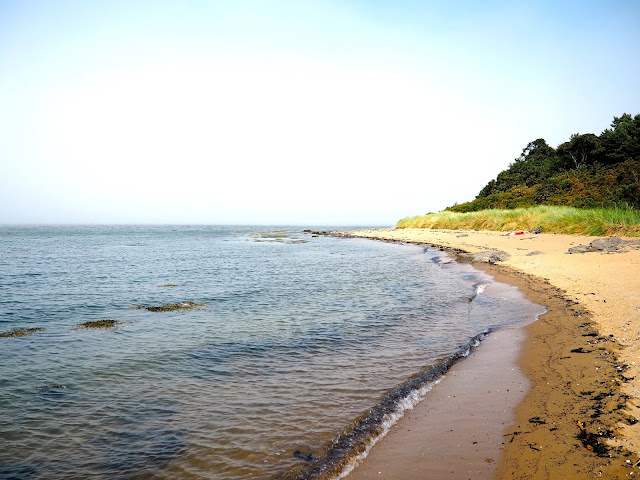 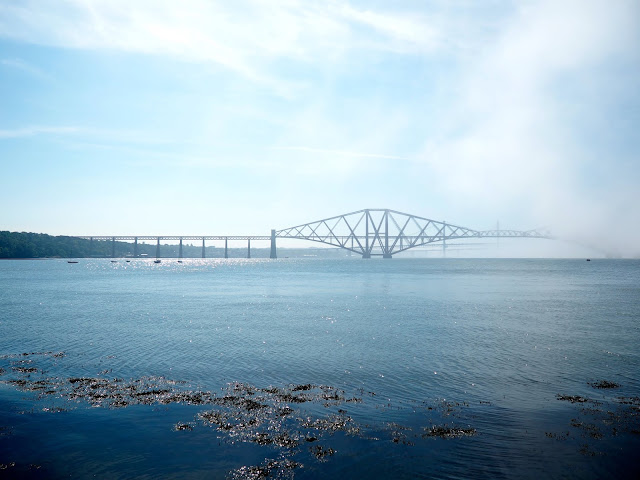 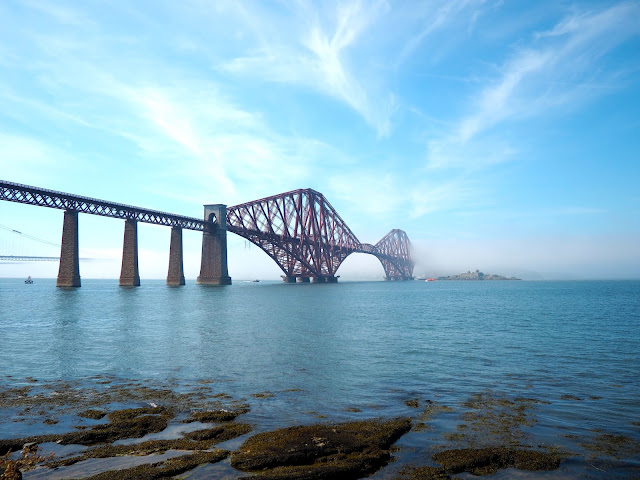 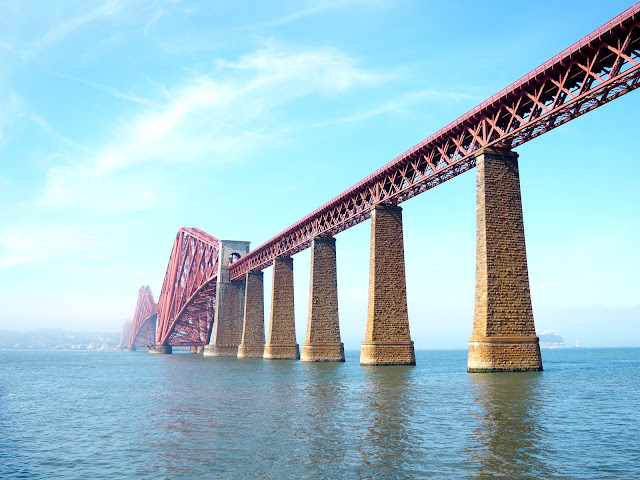 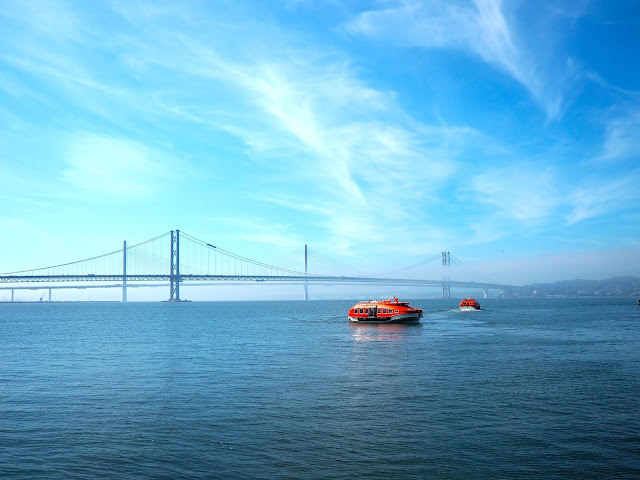 It was a beautiful route, especially on such a nice summer day, and was a nice balance of being easy enough in terms of inclination, but long enough that I was suitably tired at the end. I love being by the coast, so it was perfect scenery for me, and I was able to take short breaks on the beaches along the way. Definitely one I’d recommend to most people, with stunning views and good for most ability levels!