There’s so many parts of Edinburgh I still haven’t really explored yet, which is shocking when I’ve lived here for so long (albeit spread out over the years). So, with the beautiful sunny weather we’ve had lately, I had to seize the opportunity to go adventuring on one of my days off last week. I decided to get out of the city centre and head to the coast, the sea being somewhere I am often drawn towards; specifically, I went to Cramond Island, in the north west of the city. This is an uninhabited island, off the coast of Cramond Village, which can be reached by a causeway that emerges from the sea at low tide – don’t stay too long and get stranded, or the lifeboat has to come fetch you back to the mainland! 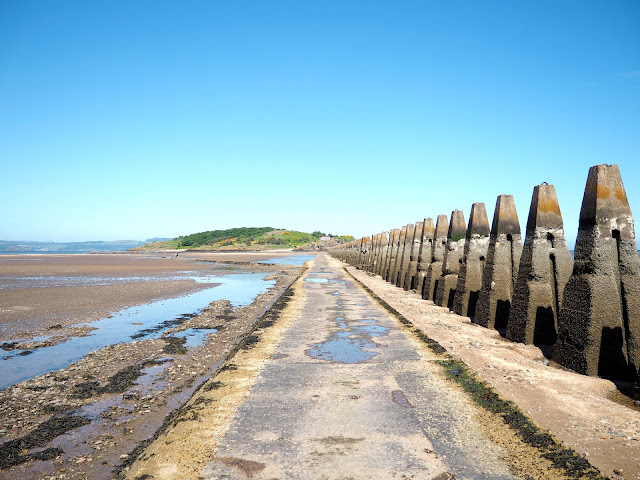 The journey started with the bus trip (no. 41) out to Cramond, which takes around 45 minutes or so from the city centre, or a little longer from where I live, in the south side. Then, it’s a short walk down from the main road, to Cramond Village and the beach there. Scotland never really gets hot enough for proper sunbathing and swimming at the beach – it’s more walking or maybe picnics that we do! I didn’t linger long on the shore anyway, as I wanted to make sure I had plenty of time to explore the island and get back again, before high tide. There’s around four hours or so when it’s safe to cross, which is more than enough time, but I was being careful! The tide times are available online and on a sign by the causeway, and bear in mind that it takes a good 20 minutes or so just to walk across! The causeway runs through the exposed seabed, a huge expanse of sand, rocks, and puddles of sea water on both sides. On the right, the strange shapes emerging from the sand are actually the remnants of an anti-boat barrier from WWII. They’re unusual formations, creating interesting shapes, and I liked peering through them to watch the seagulls on the sand bank, and see the views of Leith in the distance.

Once I reached the island itself, I went off roaming, with no particular direction or destination in mind, but I more or less ended up doing an anti-clockwise loop around it. First, I scrambled up the rock hill on the eastern side, where the first of many WWII fortifications is situated, and there are more fantastic views towards Leith, and out of the Firth of Forth to the North Sea. I made for the hill in the centre of the island next, from which you can enjoy views looking back towards the shore of Cramond itself, the causeway stretching across the sand. There were quite a few people around at this point, but as I ventured further towards the northern shore of the island, I found myself more or less alone, and following paths that had been trodden through the grass, surrounded by tall plants reaching almost up to my waist – I was bare legged that day, so I definitely left with a few nettle stings and other scratches, but nothing I haven’t dealt with before! There were more views of Leith to take in, looking down from a high vantage point, above a rocky beach. Then, as I moved around to the northern shore, I made my way past old campfire sites, and dozens of foxgloves waving in the breeze. To the north, you can see over the Firth of Forth to the island of Inchmickery, heavily fortified during the war, and even as far as Fife on the opposite shore. 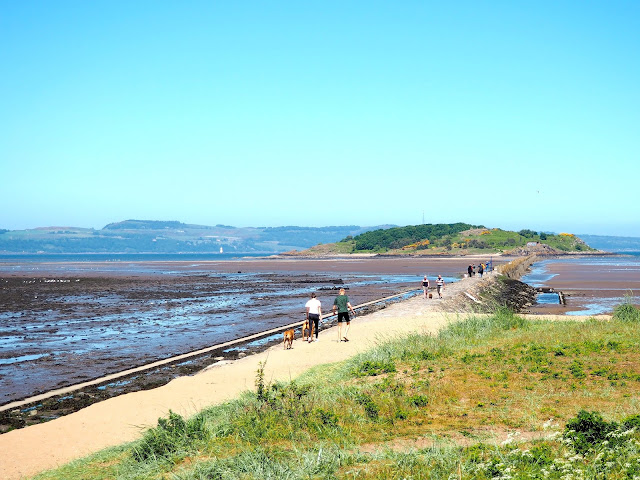 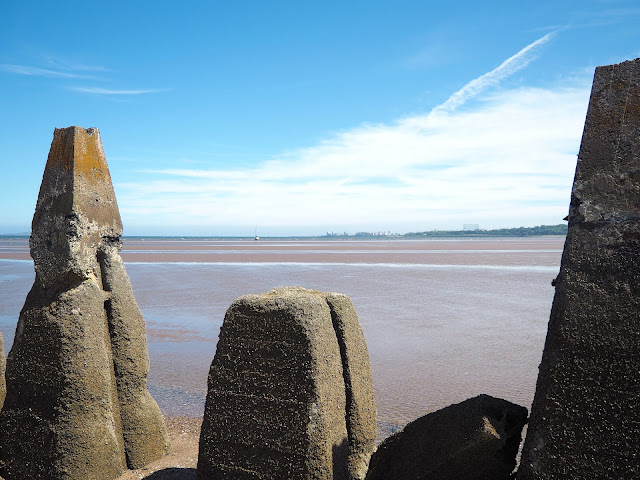 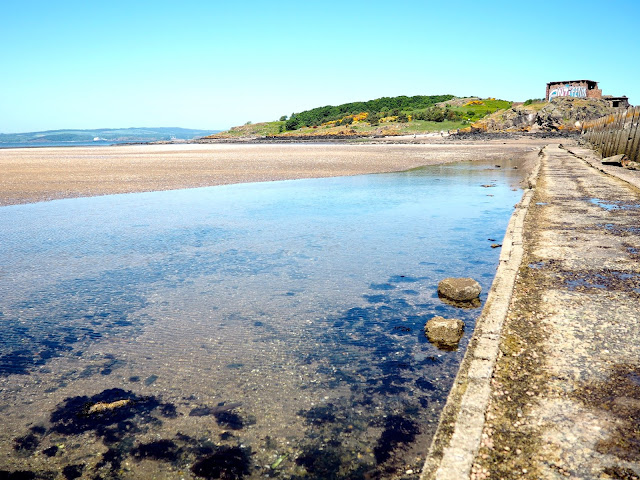 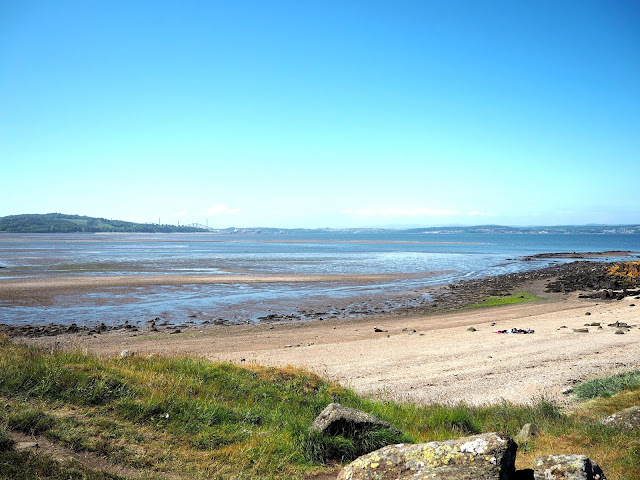 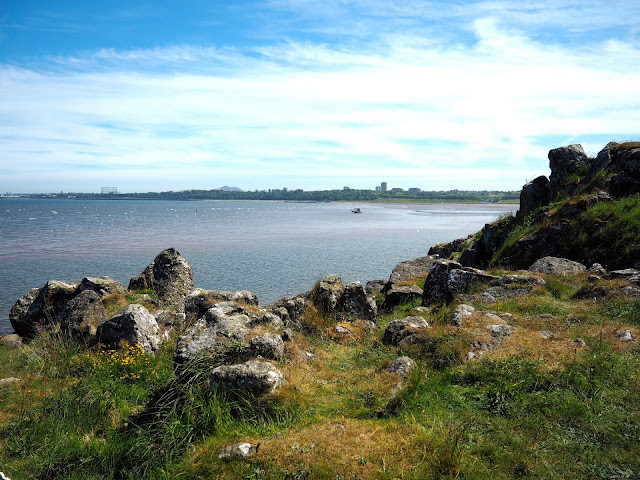 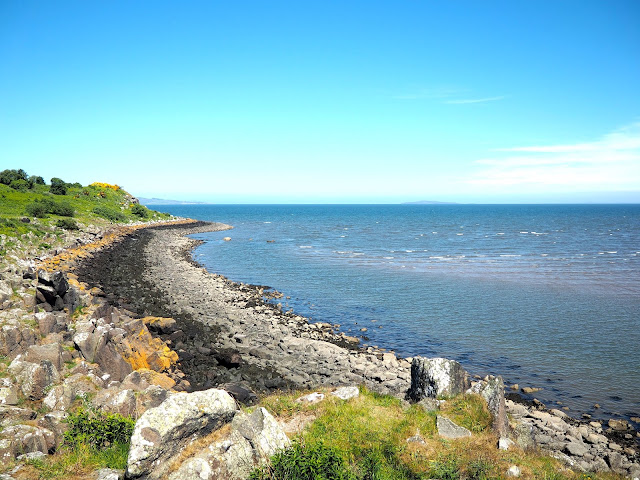 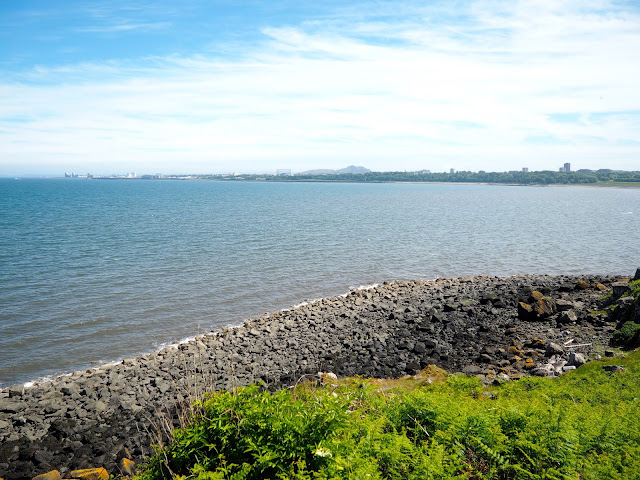 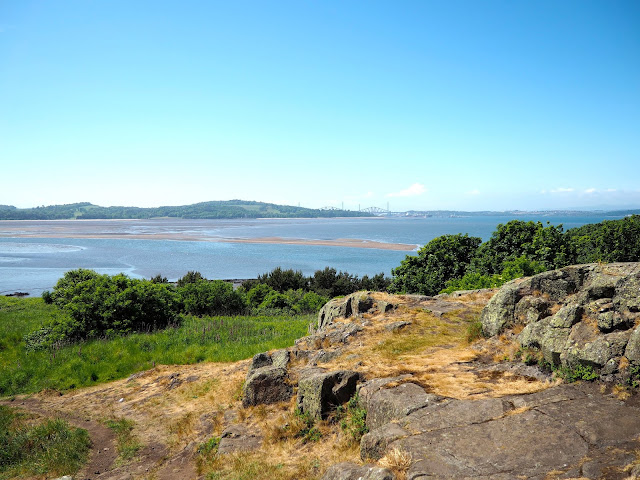 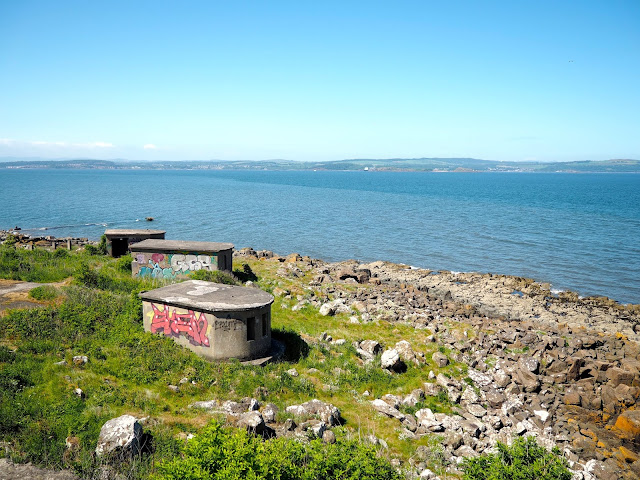 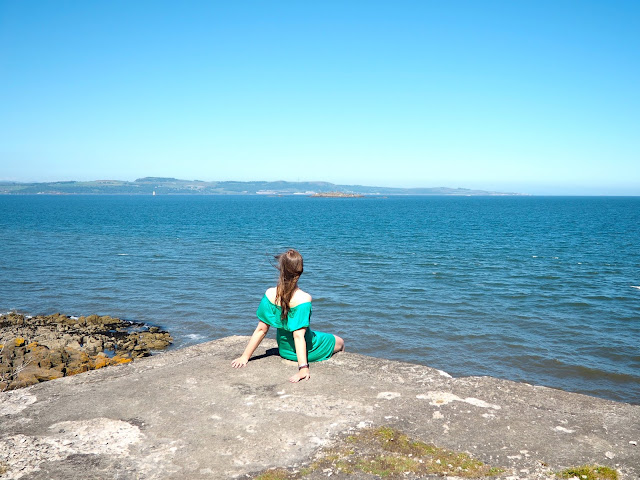 I wound my way around the northern shore, clambering down to explore the numerous fortifications and gun emplacements around the area, all of which are now empty and heavily graffitied. I enjoyed the quiet time here, as I only saw one other person in this area, who also kept to himself. There’s an interesting juxtaposition with the war buildings and modern graffiti, next to wild flowers springing from the rocks, and the stunning coastal views, made all the more beautiful by the sunny weather that day. I found myself feeling very relaxed and peaceful out here – sometimes being alone causes me to get stuck in my own head, and start overthinking and stressing, but I also relish my alone time too, as I need it to unwind and recharge, and when I can feel as calm and content as I did that day, it’s fantastic. I took my time roaming the rocks here, jumping and scrambling over some of them (no easy feat when wearing a dress, perhaps not the wisest of decisions, but I managed!), pausing to snap dozens of photos and peer into some of the buildings.

As I made my way over to the western shore, the Forth Crossings became visible in the distance – I’d glimpsed them when first crossing over and arriving on the island, but this was a better viewpoint. There was a rocky outcrop here that I spent some time roaming over, and experimenting with different views and angles for some photos. The bridges are too far away to get really great shots of them (at least with my level of camera lens), but they make for an interesting detail in the background. There’s also the ruins of Duck House on this shore, an old cottage that has long since been abandoned, making for another unusual feature. Then, my route took me back along to the beach section of the island, a dark sandy stretch around its south west side, stretching back around to face Cramond and return to the causeway, to walk back over to the mainland. 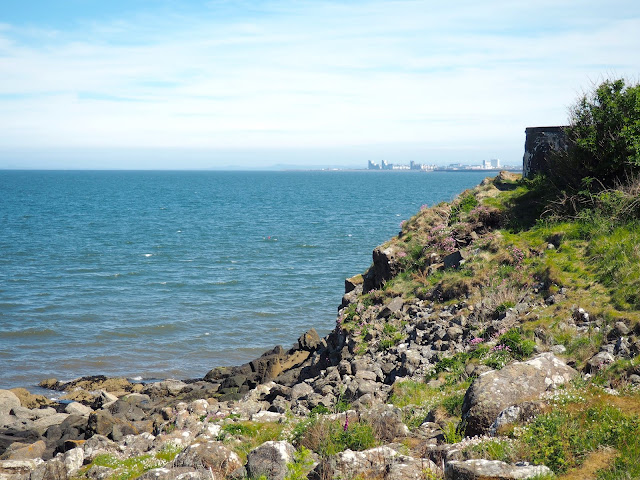 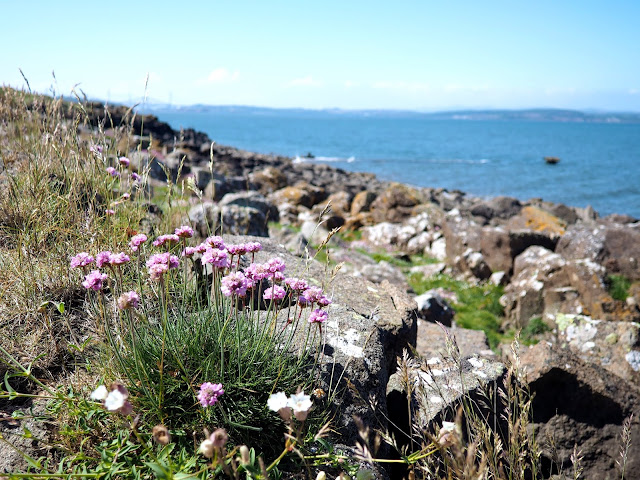 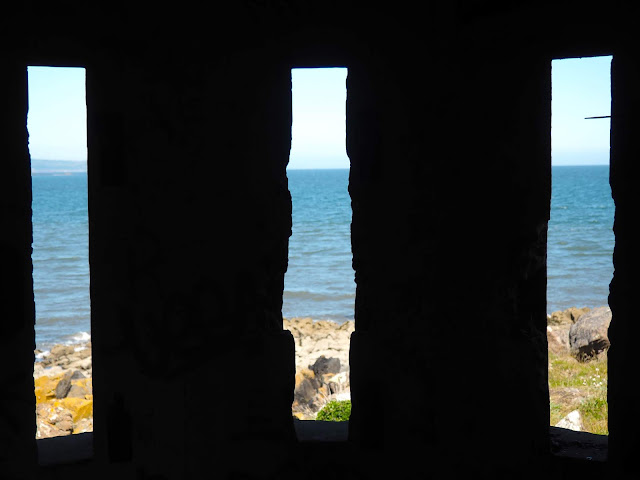 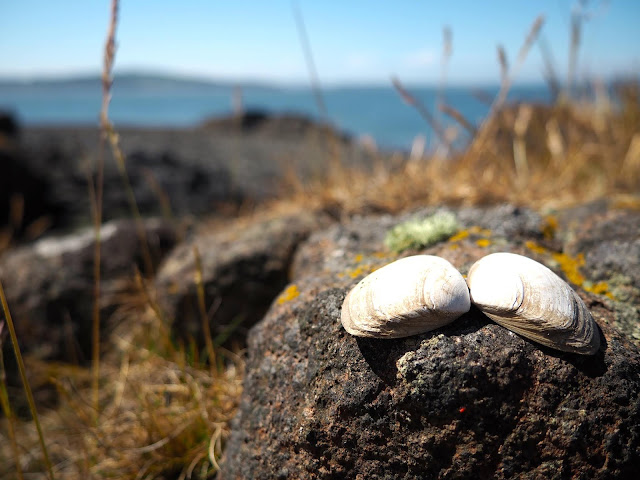 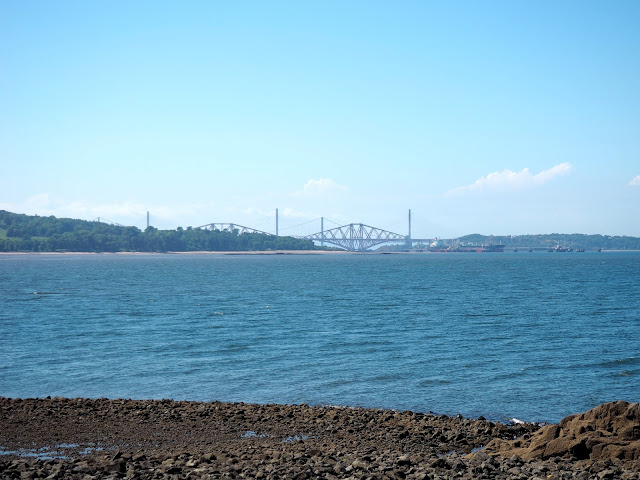 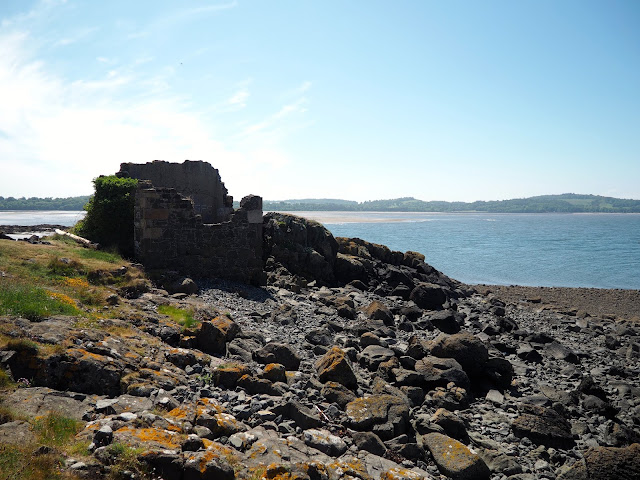 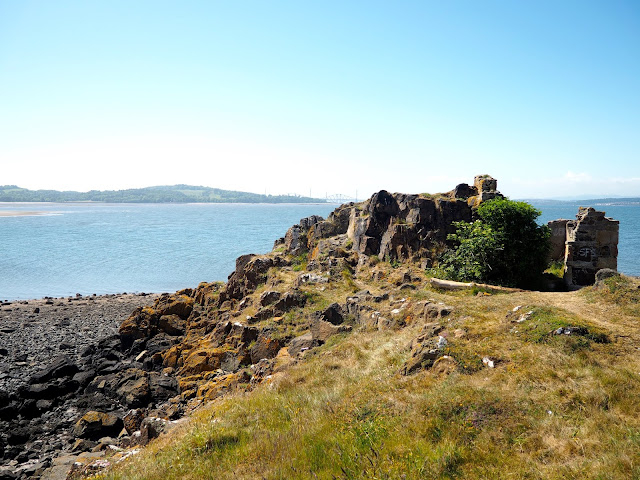 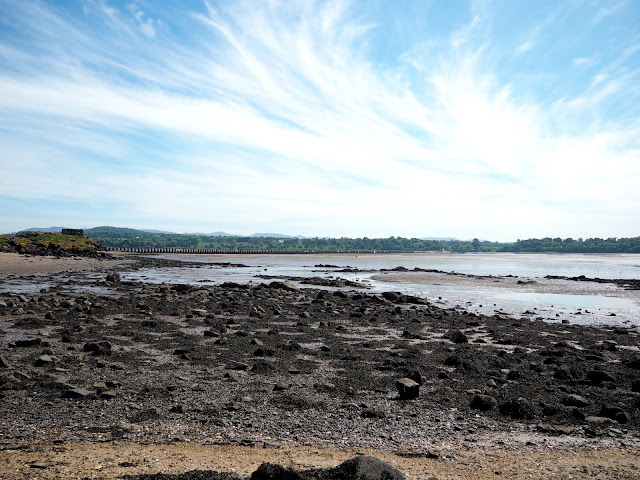 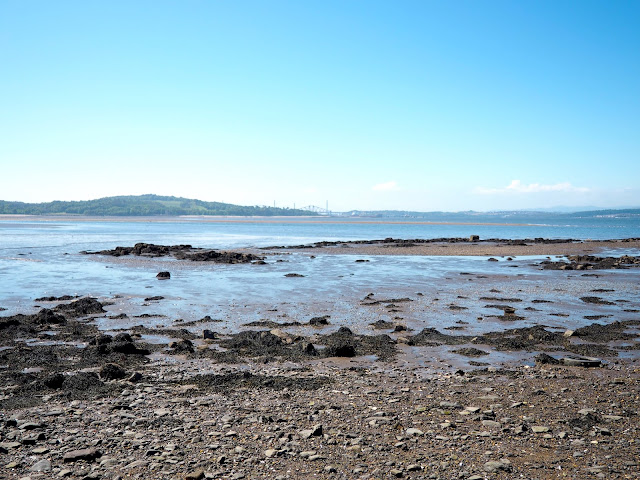 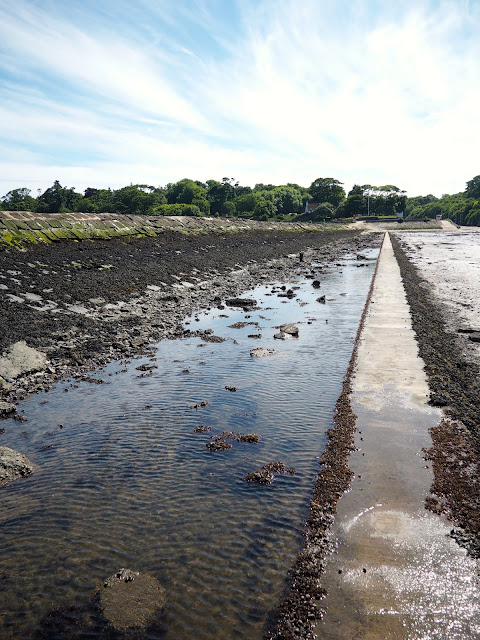 I liked that a lot of the walk around the island was just me wandering over grass and rocks, as there’s only a few paths to follow, and they’re often just from other people treading there, not from any actual construction, so the island maintains its remote, wild atmosphere. It is unusual, having that atmosphere juxtaposed with the military structures, but the fact that they are also abandoned still makes it feel like you’re exploring somewhere relatively secluded and untouched. I thoroughly enjoyed my day out here, and wouldn’t mind going back again, just to enjoy the peace and quiet, the wildness of the scenery, and be down by the coast again!