Well, here we are. Nine weeks, seven countries, and this is the twenty-fourth, and final, blog post about my travels – Taiwan seems like such a long time ago now! I was actually in need of a holiday after my holiday at this point, so my top priority for these last few days in Bali was to rest and relax. After the group tour finished in Ubud, I made my way south for the last four nights of my trip. Kuta is one of the most popular destinations in Bali, chock full of hotels, restaurants, and bars. It seemed much too hectic and touristy for my tastes though, so I was staying slightly further up the coast, in Legian. Kuta, Legian, and Seminyak all line the same beach, and it’s not clear where each one starts and ends really. They’re all busy with tourists, but it’s noticeably quieter, and with less partying, the further north you go. 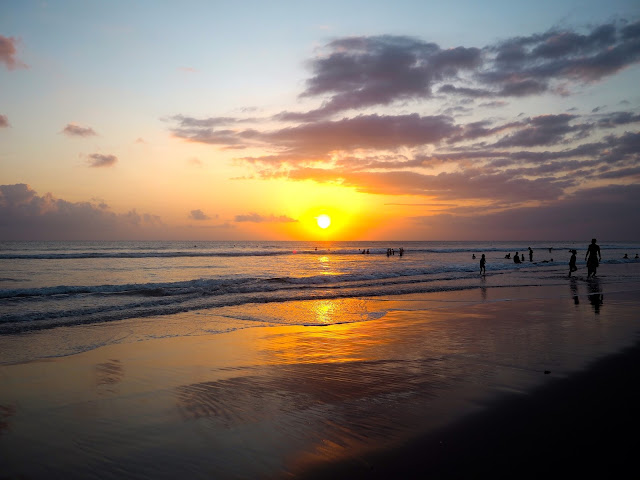 I did venture down to Kuta on my first night in the area though, a half hour walk away, to meet up with the other tour group we’d crossed paths with already in Bali. I was curious about Kuta’s legendary nightlife, and we ended up in Sky Garden, the most famous club here. It’s got four floors inside, including the rooftop, where people could dance up on the bar, and hosts famous DJs fairly regularly – had I been there just a week later, Steve Aoki would be DJing. Needless to say, after a night out there, and my many weeks of travelling, the next day was spent doing very little. I wasn’t staying in a particularly fancy resort or anything, but my budget hotel still had a rooftop pool, from which the beach was visible in the distance (it was a few streets back from the beach). I spent some time up there, just lounging in the sunshine. The pool wasn’t very big, but when I was in need of some serious downtime, it served me well. I did take a walk down to the beach later in the day (the particular stretch is called Double Six, but as I say, the whole coastline there runs together) to watch the sunset, which I’d heard good reviews about. This was when it became apparent how busy this area of Bali gets, and sunset seemed to be the most popular time of day to come to the beach – at one point, after sitting down for a while, I found I had to move when a group started playing frisbee more or less over the top of me, and some others sat right in front of my view. Crowds aside, the sunset was beautiful though, and with the waves crashing, and surfers still drifting out in the water, it definitely made for a picturesque scene. The sky lit up beautifully, the clouds even adding to it, as they darkened to this deep purple colour. I didn’t linger long after the sun hit the horizon though, as I was eager to return to the peace and quiet of my room (this was also the first time I’d had my own room since Taiwan, 8 weeks ago!). 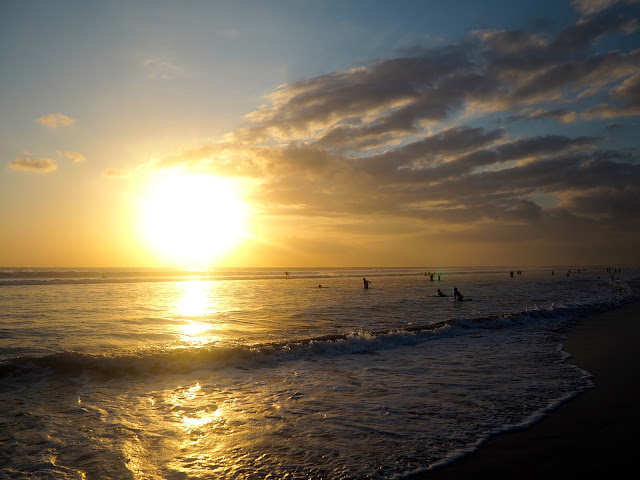 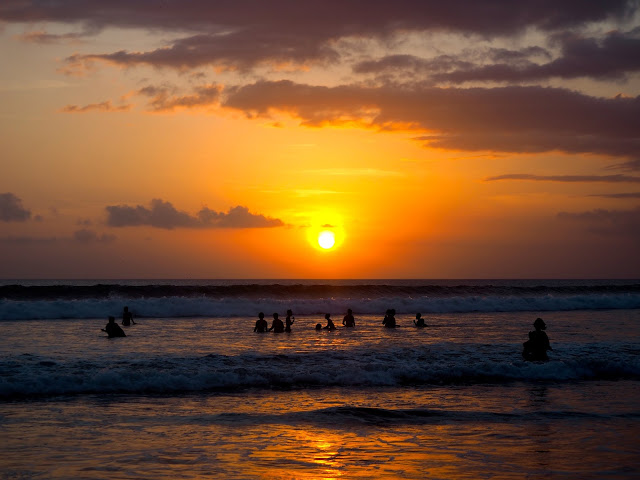 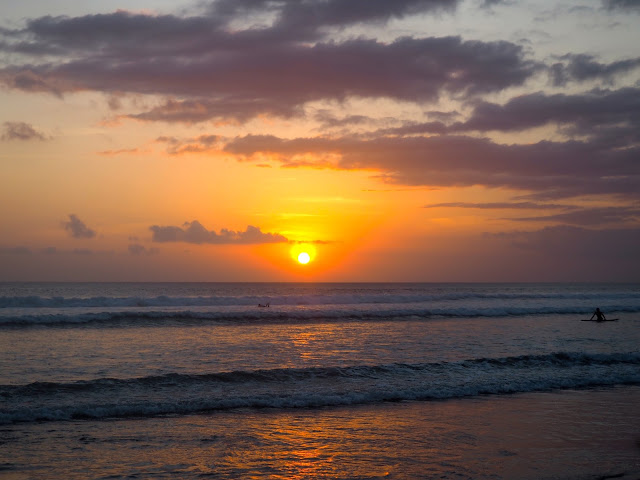 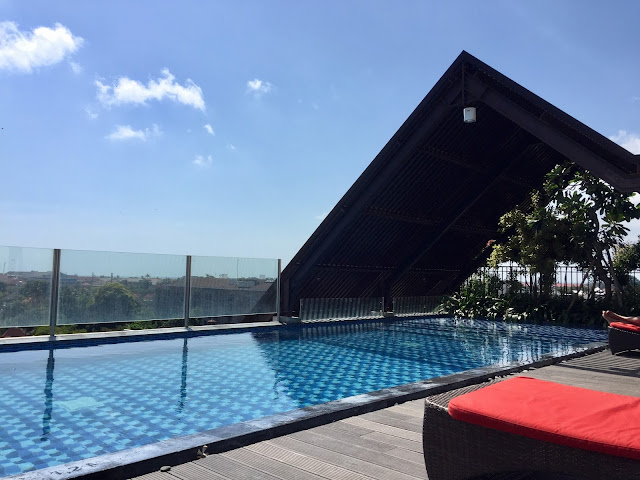 The next day was similarly lazy, since it had also been weeks since I’d had a good long lie in. I headed back down the beach in the afternoon though, and was pleased to see it wasn’t quite as crowded at that time. I ended up walking up and down – I walked about an hour and a half in total I think, but that was only a tiny portion of the huge bay. Despite its popularity, I was pleased to note that the beach was still clean and free of rubbish left lying around. With its ample size, white sands, and clear blue water, it’s clear why this is such a popular area (plus its proximity to the airport). The tide was out, but the sand was still covered in pools of water drifting in and out with small waves, while the larger ones crashed further out in the distance. This was really nice actually, as it meant I could walk through the water, which only reached my knees when waves did come in, without getting too close the larger waves. It was a good way to watch some of the surfers too, and the still, shallow water I was walking through allowed for perfect reflections of the sky and the other people wading through it. It was such a bright day, that the horizon almost vanished as the sky met the sand in front of me. I was plugged into music too for this walk, to be able to disconnect entirely from other people – I do enjoy the group tours I’ve done, but I also really value my alone time, which I was more than ready for by this point of my travels. 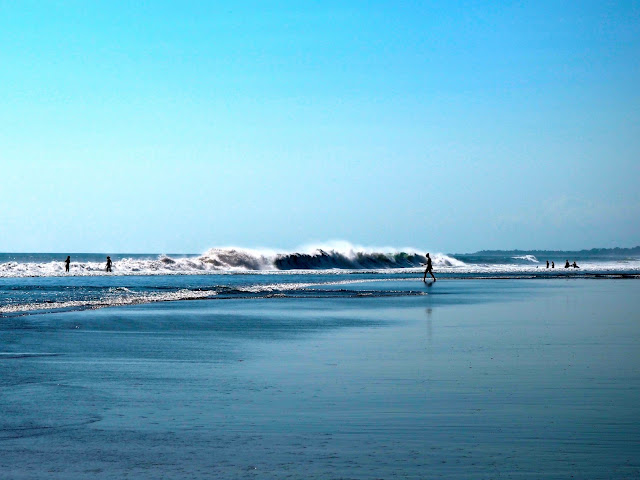 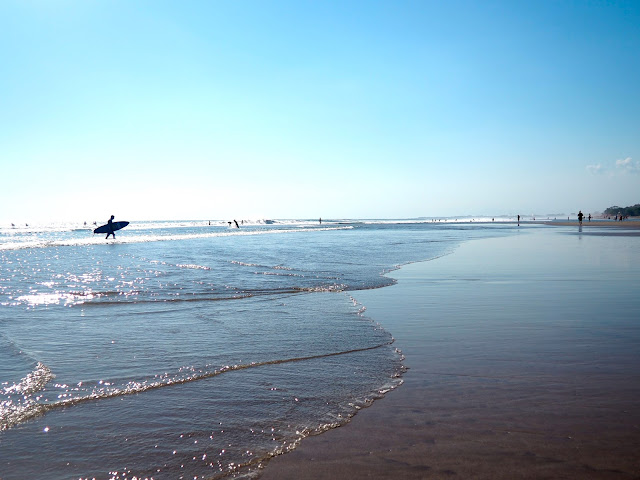 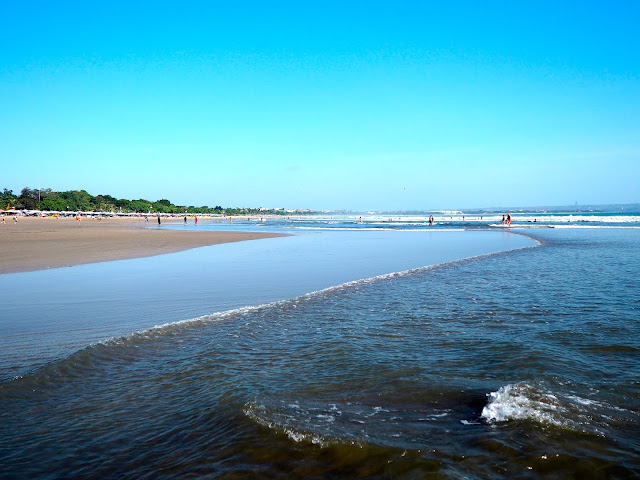 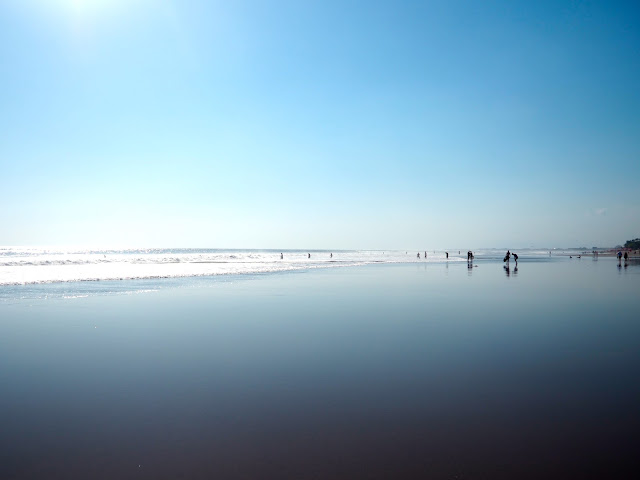 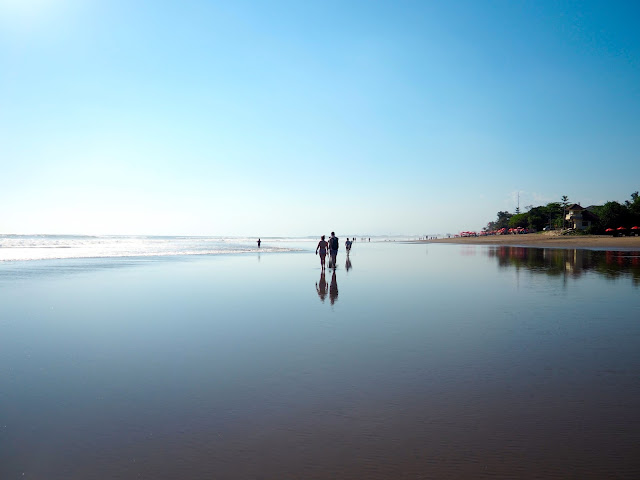 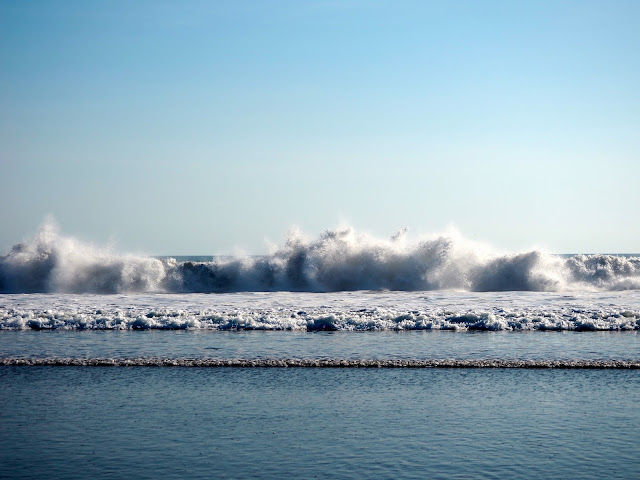 For my third, and final, day in the Legian area, I headed out of town and southwards, to the Bukit Peninsula, where some truly spectacular scenery can be found. Bali has very little in the way of public transport, so I arranged a driver for the afternoon. The official, metered taxis are best for short, single journeys, but it would be hard to find another at each location, and for the distance I was covering, a private car and driver was better value (most hotels should be able to help arrange this). I only paid for half the day, and although each location doesn’t look far apart, it can take a while with traffic and narrow, twisting roads, so I probably spent about 40-60 minutes in each location. If I were in Bali longer, I could have easily spent whole days exploring more of the beaches around this peninsula, but in the time I had (and considering I’d wanted those other two days for doing almost nothing), I was sticking to the highlights. First, I visited Balangan beach, one of the top choices for surfer’s I believe. As soon as I descended the stony steps in the cliff, I was met with perfectly clear turquoise waters, and a white sand beach with only a dozen or so other tourists on it. It was bordered at either end by large cliffs, and the shallows of the water were full of small rocks, almost acting as a barrier for the waves, which were crashing further out. I saw several surfers catching some great waves, able to follow them far along the length of the beach before coming off into the water again. I took a dip in the shallows myself, to cool off in the blazing sun, though you have to pick your way over the rocks to find a spot to sit or lie down in the water. I dried off on the sand again, just enjoying the beautiful scenery around me, before heading back along the beach and up to the waiting car. 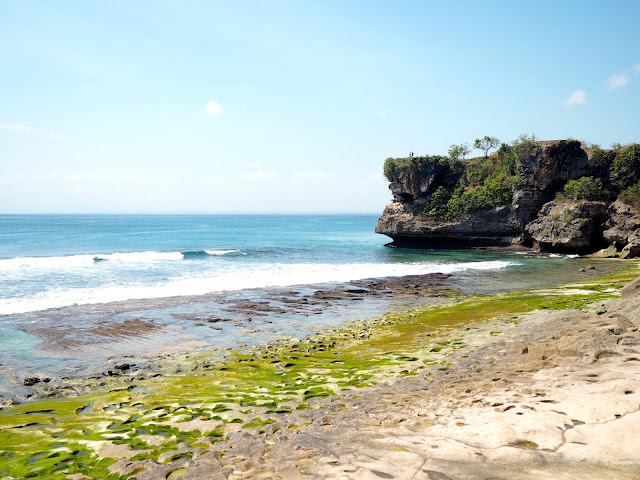 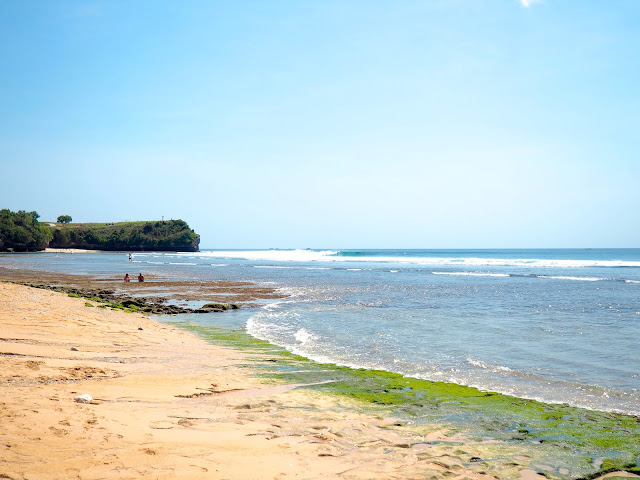 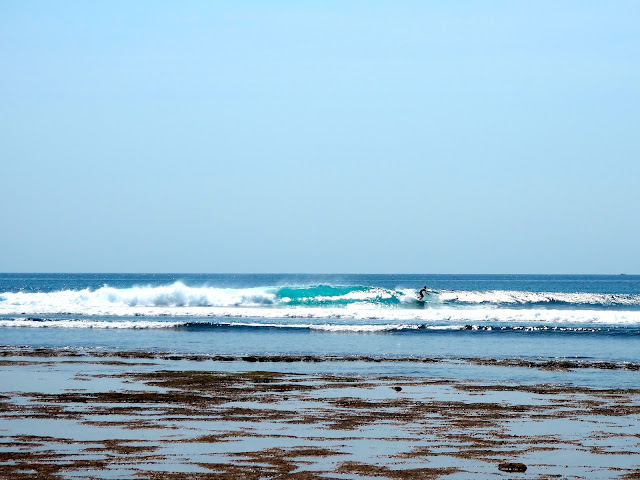 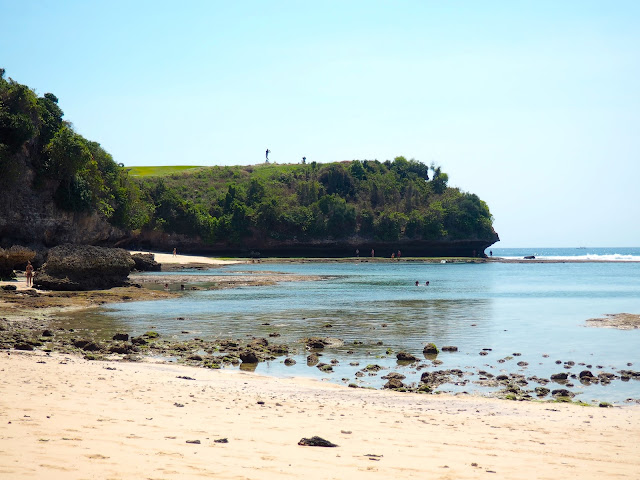 Next was Padang Padang Beach, also called Pantai Labuan Sait, one of the most popular beaches on the peninsula. Because of the large numbers of visitors, there’s an entrance fee for this one, though it’s not expensive. You have to head down some stairs through the rocks to reach this one, being careful of the wild monkeys scrambling around, and it immediately felt busier than Balangan when I emerged on the other side. However, that’s mainly because it’s much smaller, so everyone has less space to spread out. I went exploring the rocks on the left first, picking my over them barefoot; the best point is ascending the stairs hidden here, for a picture perfect view of the little bay and the clear blue water. I ventured out a little further, spotting some fisherman standing further out to sea, before turning back as the rocks got more difficult to navigate. A lot of people were sitting on this side of the beach, sheltering from the sun in the shade under the cliff. I wanted to make the most of the sun though, especially on my last day, but the middle of the beach was pretty full too, so I wandered around to the right side, where there were a few quiet corners hidden amongst the rocks. I stayed here awhile, dipping my toes in the water again, and just unwinding and taking in my surroundings. It’s not difficult to understand why Bali is so popular, when there’s always another breathtaking view around every corner. 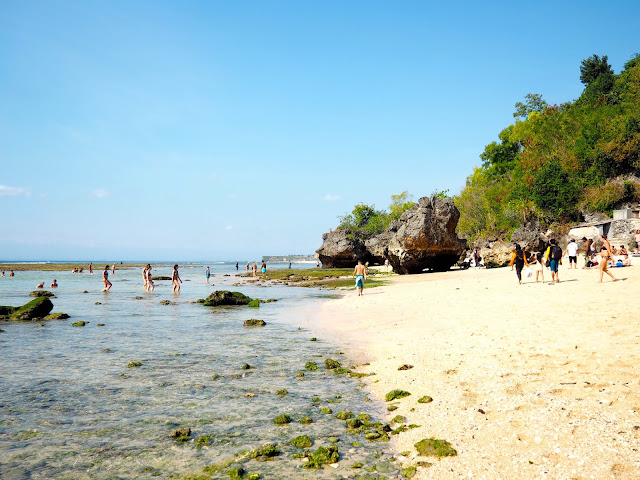 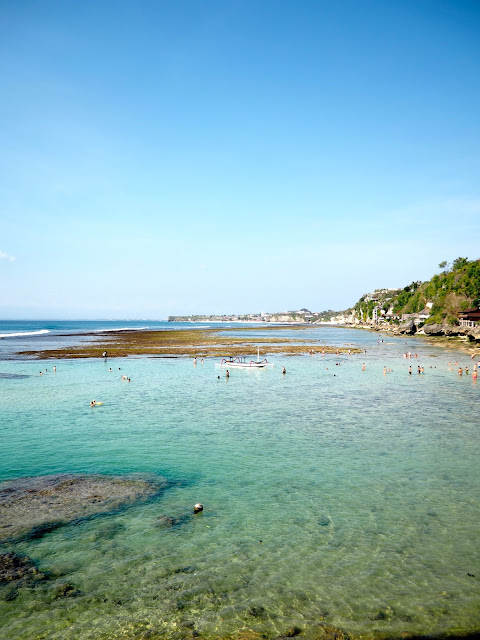 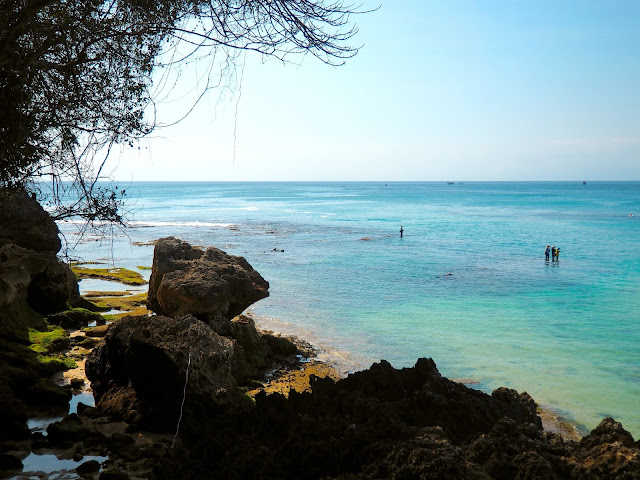 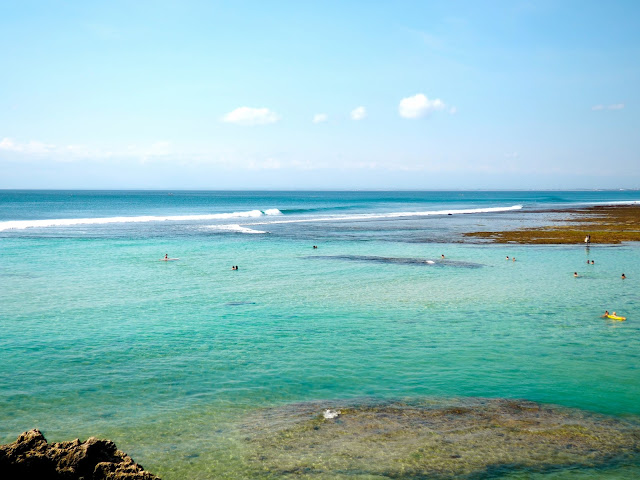 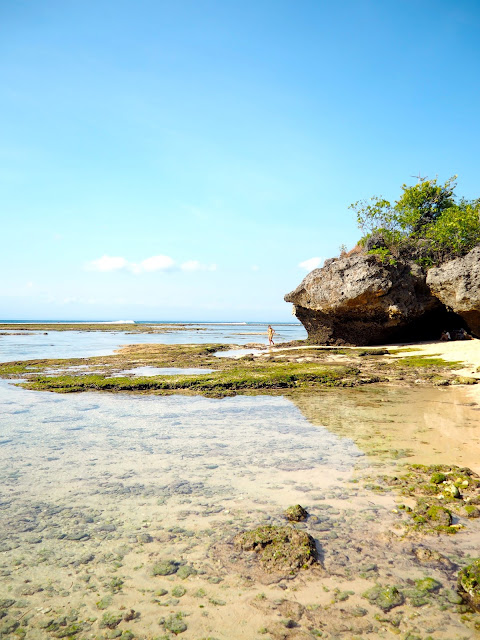 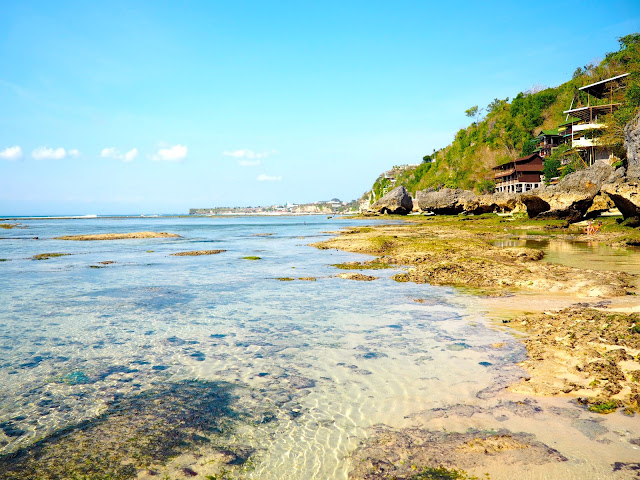 And I’d saved the most breathtaking for last, finishing my day, and my trip, at Uluwatu Temple. A popular option here is to stay for the sunset, then watch the fire dance performance, but I could tell pretty quickly that it would completely rammed at that time, plus I’d have to pay the driver for extra hours. I was content enough to spend an hour or so to visit myself, then return to Legian – though we did get stuck in a traffic on the way back, but I wasn’t charged extra fortunately. Anyways, Uluwatu was simply stunning. The temple itself isn’t the most exciting one I’ve seen, and you have to be wary of the monkeys trying to grab your belongings, but the cliff top views are absolutely worth coming for. As well as the temple in the centre, perched on the edge of a cliff looking out to sea, there are paths running along the cliff top in both directions, so most people (like me) spend their time walking up and down these. The brightly coloured flowers growing around the path also add to what are already jaw-dropping views, of the temple buildings silhouetted atop the cliffs, and the waves crashing on to the rocks and sandy bays below, as the sun sinks lower in the sky to the west. I took far too many photos of the views here, stopping every few feet for another angle, or with another flower in the foreground, as I wanted to remember as much of this landscape as possible. Even without the colours of a sunset painting the sky, it’s a beautiful location at any time of day. I walked up and down in both directions, exploring all the paths thoroughly, as well as taking a look at the actual temple buildings (though most are only accessible to worshippers anyway), and lingering as long as I could, before heading out again before it got too crowded for sunset. I returned to the hotel, ordered room service (I had a lot of room service over these days!), and one last night of relaxation, before starting my long journey homewards the next day. 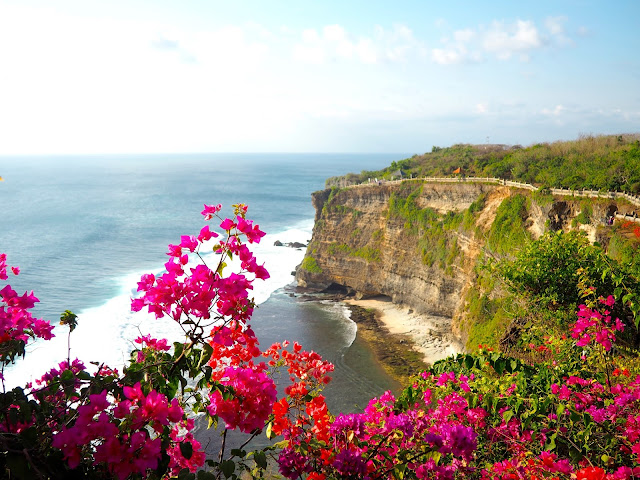 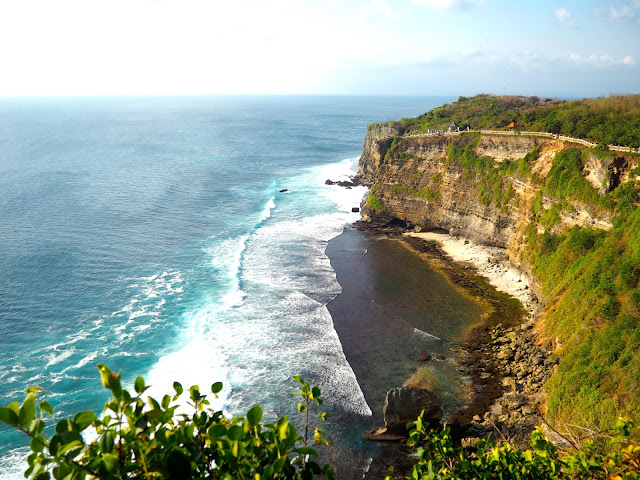 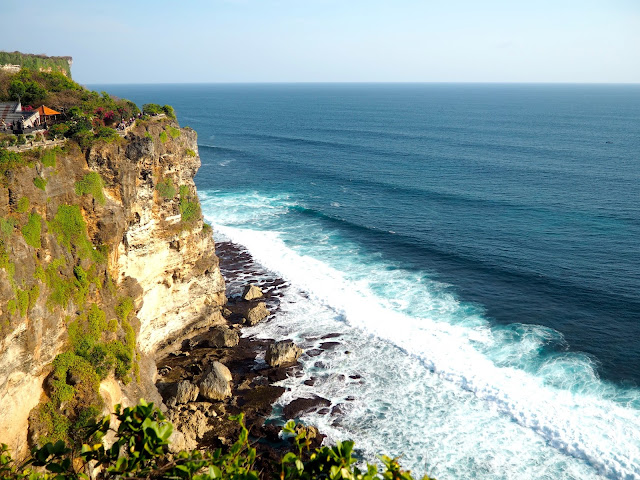 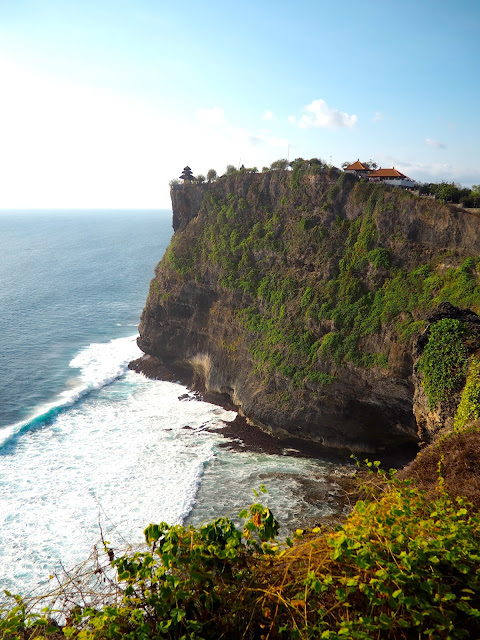 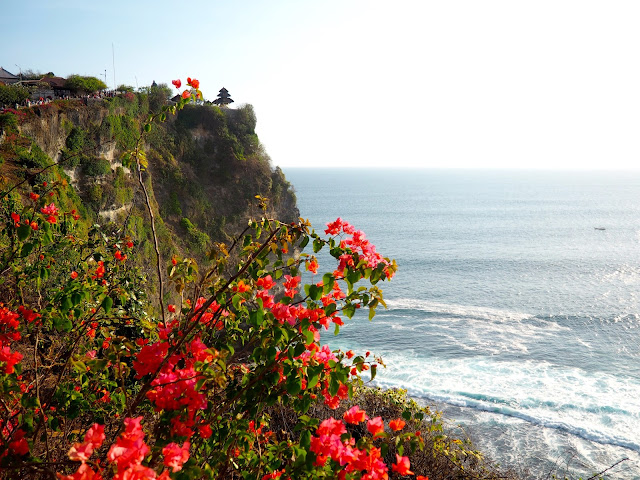 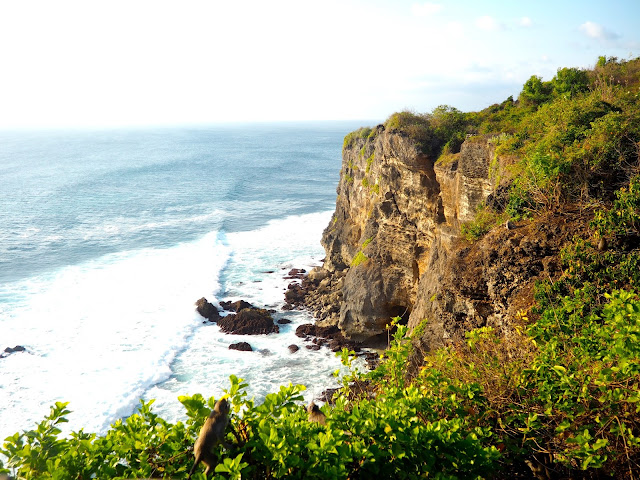 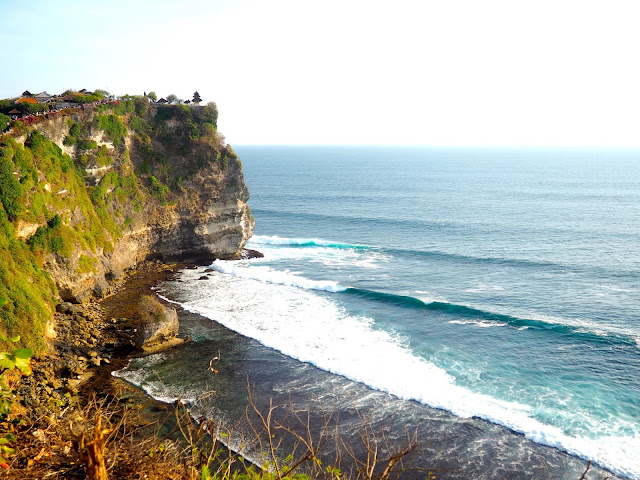 Despite the crowds and excessive tourist facilities, the south of Bali is a truly stunning corner of the world, and a very scenic place to spend my last days on the island. I was glad to have been able to balance time off doing nothing with a little bit of sightseeing, to make the most of those gorgeous views, and to have had some quiet time to myself. But with that, my time in Bali came to an end, and with it, so did my entire summer trip. It was a whirlwind of a summer, full of unforgettable experience, and I’m so glad I pushed through the stress of planning it all those months ago, as the whole nine weeks had been amazing. The journey home was a long one, taking three flights over the course of a day and a half, as I was not only leaving Bali, but leaving Asia, after two years living and working there. And now I’m back in the UK again. What’s next? Stay tuned to find out…