Charlotte Other, Travel
Now that I’m back in Hong Kong after being home for Christmas, that means resuming my sight-seeing activities! Yes, there are still things here I haven’t seen yet. The Big Buddha – properly called the Tian Tan Buddha – has been top of my list for a while now, but plans kept changing! We initially intended to hike down from it at the weekend, but when we went to leave it began to rain, so we took the bus instead. You can get there by taking the MTR to Tung Chung, from which the most popular option to get up the hill is the Ngong Ping cable car, but to avoid the queues and pricey ticket, we took the no. 23 bus from the terminus next door, which is far cheaper and takes around 45 minutes. I would like to go in the cable car another time though, but it was also really cloudy that day, so we wouldn’t have seen much anyway. Once you reach the top, there’s Ngong Ping village to explore, the buildings of Po Lin Monastery, and of course, the massive 34m tall (including podium) Buddha statue, weighing 250 tonnes, perched on the hill overlooking the piazza, the largest outdoor seated bronze Buddha in the world. 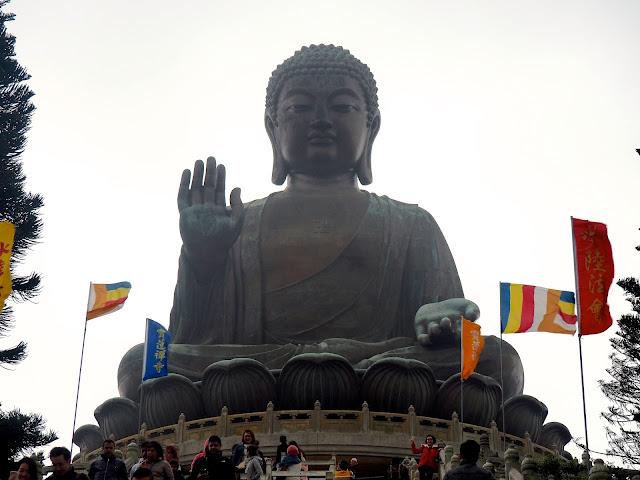 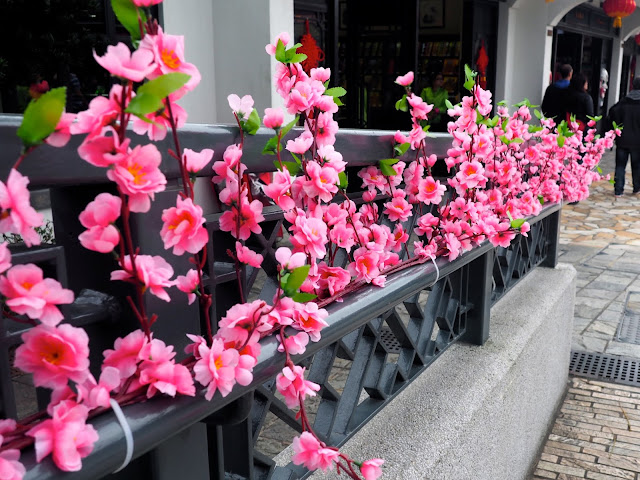 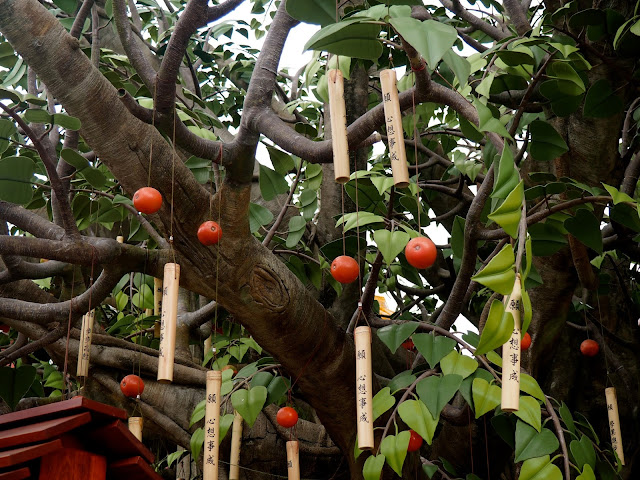 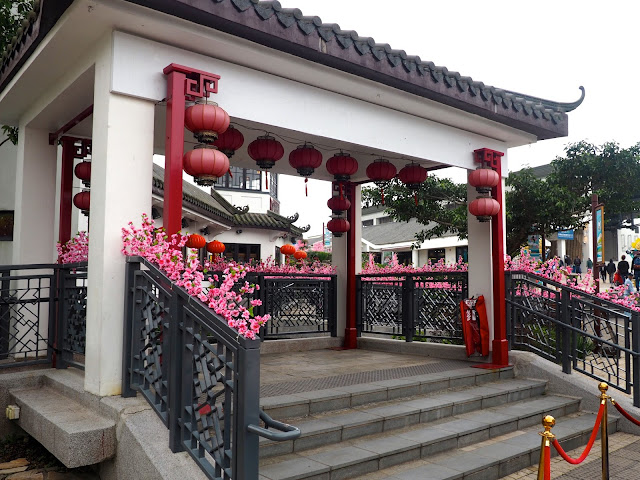 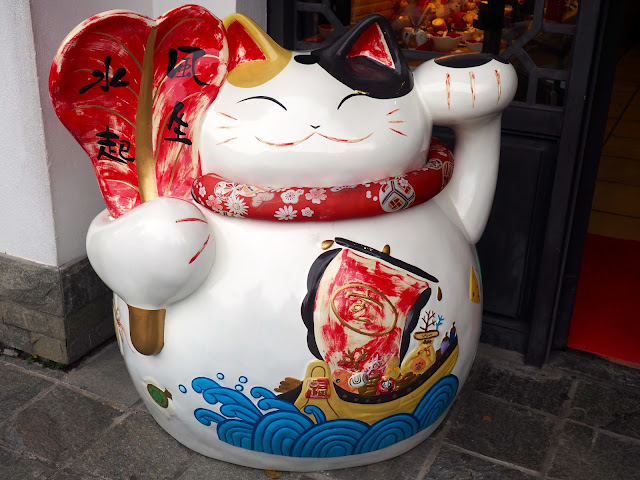 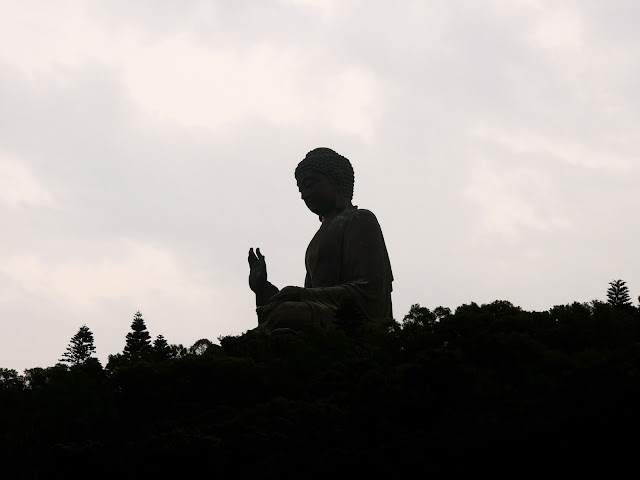 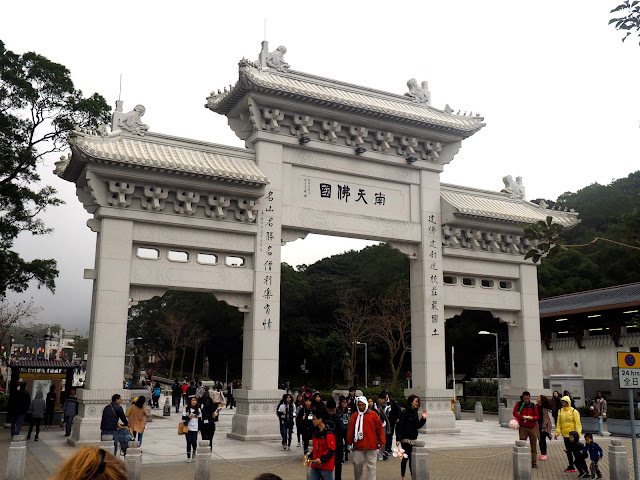 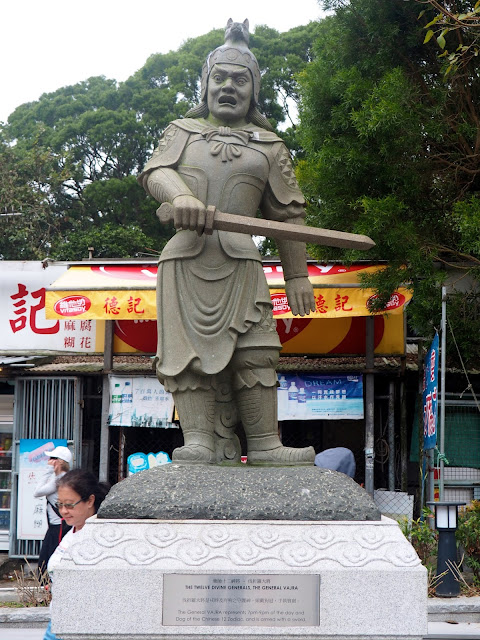 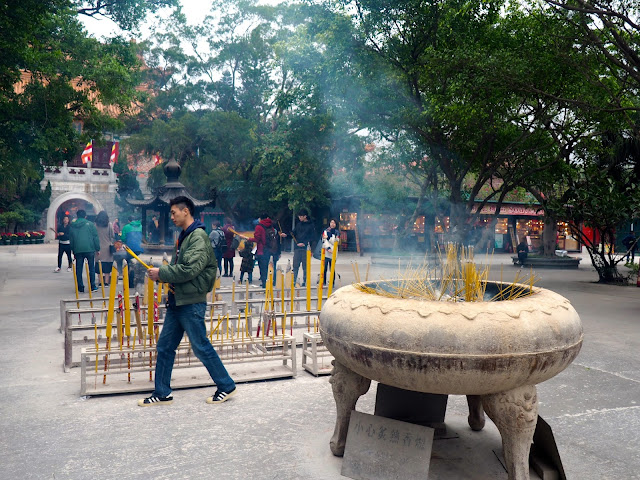 Ngong Ping village is right next to the bus stop, and we headed here first for food and coffee. The street is mainly composed of souvenir shops and restaurants, but it’s still quite pretty to wander around, especially since there was pink blossom everywhere during our visit. I’ve found a lot of souvenir shops and stalls in Hong Kong do have some really nice things, not just tourist tat, and there were a few other shops scattered throughout, selling vintage clothes or cute trinkets and such. We also went to a tea shop (near the cable car terminus) to try the honey jasmine tea my friend was raving about, having been before, and it turned out to be pretty good! The village and piazza also have lots of cows and dogs roaming free, and it was quite amusing to watch a cow stick its head in a bin looking for food! I’m not sure where they come from or why they’re there though. From the village, we walked under the massive archway and down the piazza, which is lined with statues of the warriors of the Chinese Zodiac – the one pictured above is for the Year of the Dog, the year in which I was born. 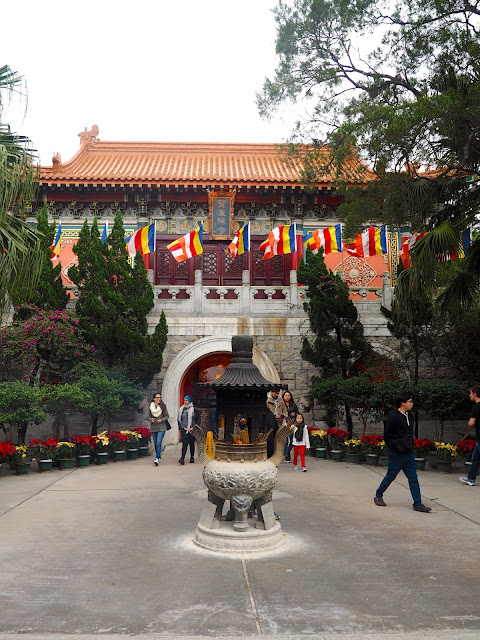 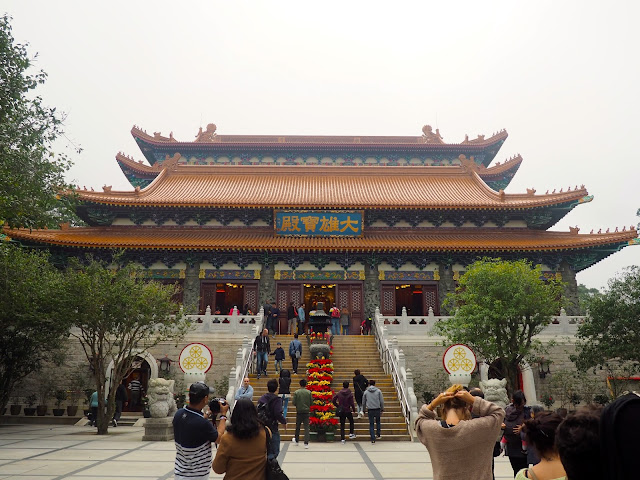 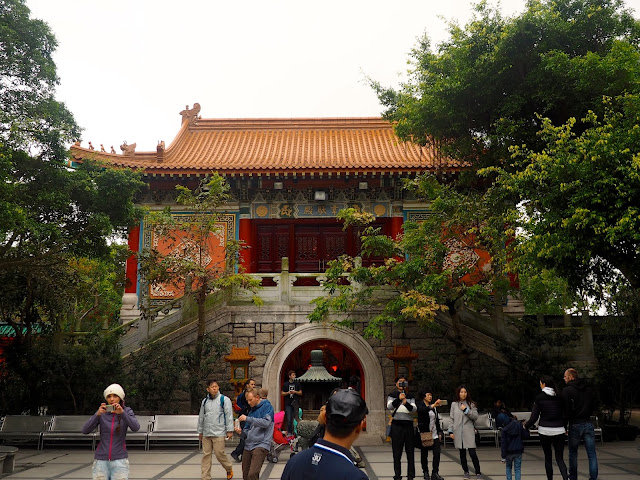 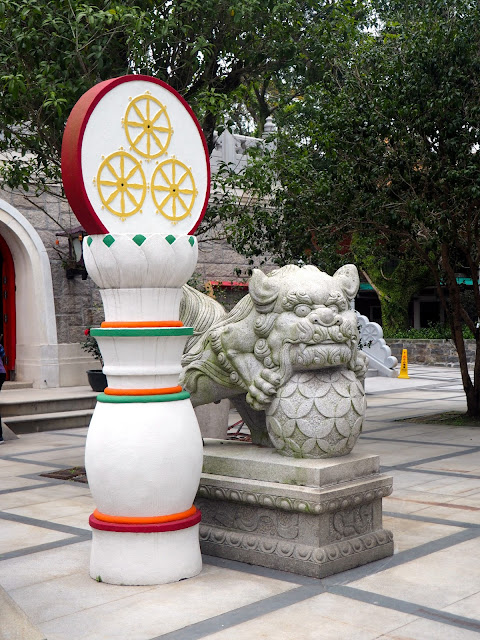 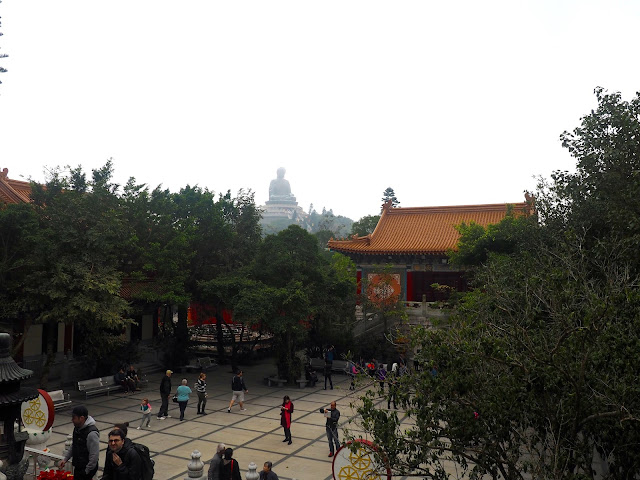 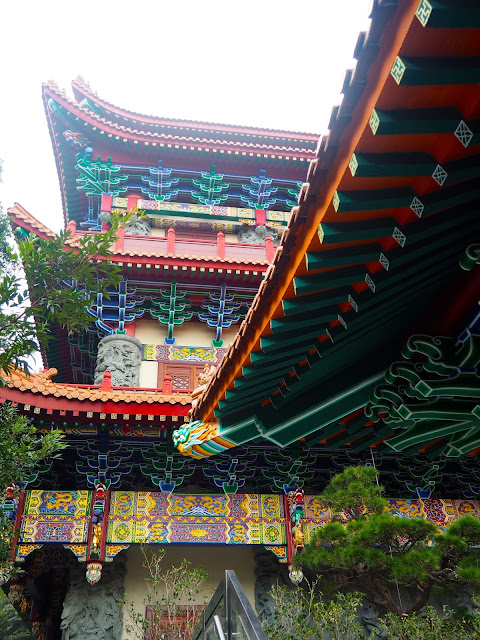 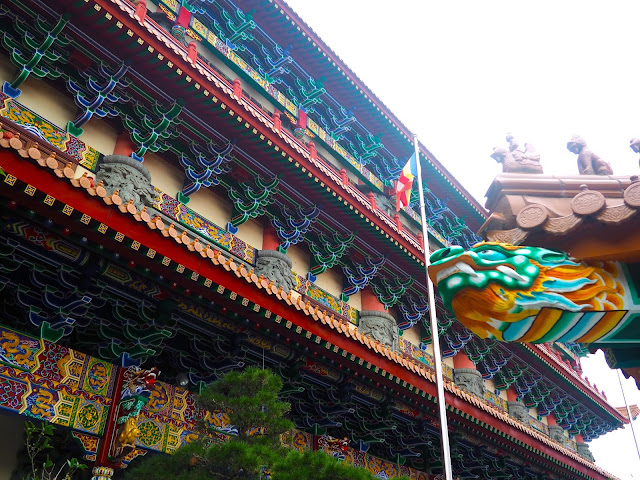 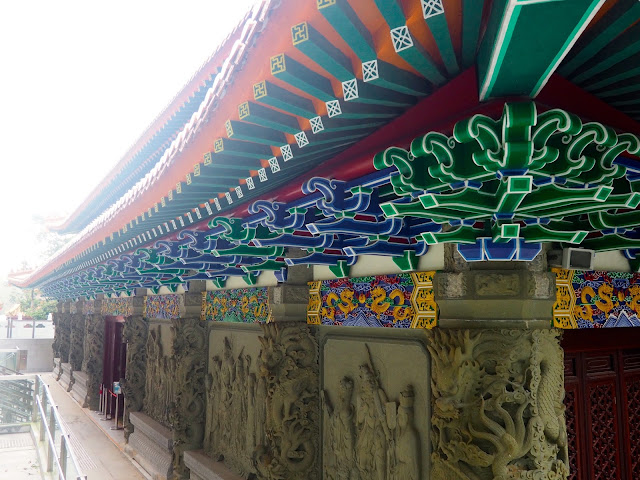 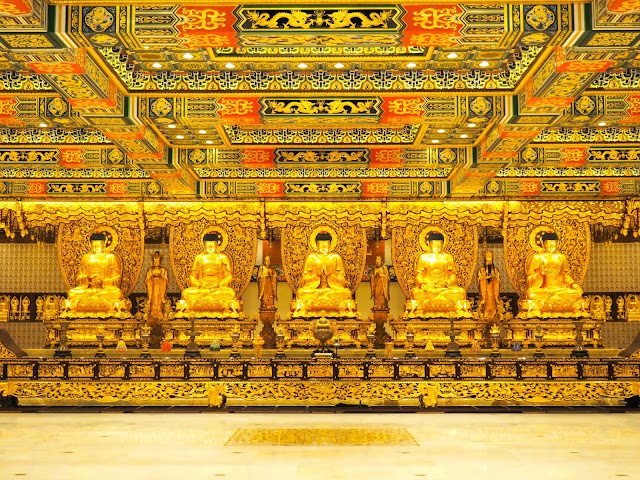 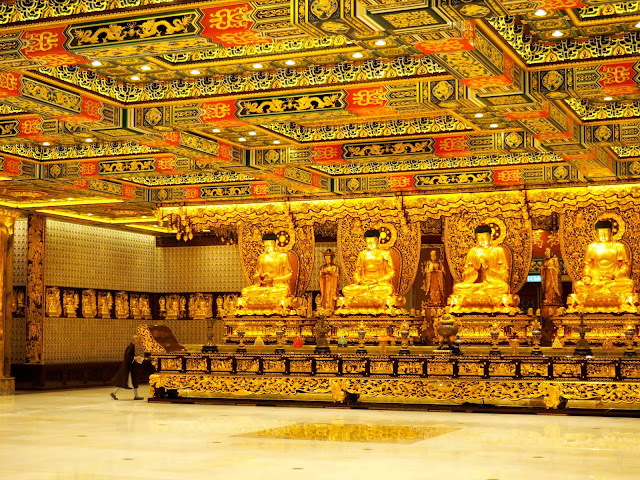 At the end of the piazza, there are rows upon rows of incense sticks burning at the foot of the Buddha’s hill, including several huge sticks that must last for weeks! If you walk around to the back of the circular podium, with all its colourful flags waving in the wind, you see the view pictured below, a symmetrical shot looking straight across to the Buddha. This also puts you right outside Po Lin Monastery, so we had a look around there first, before heading up the hill. The monastery has stood there for over 100 years, while the Tian Tan Buddha is an extensions of the monastery and took them 12 years to build, completed in 1993. The monastery’s buildings have that classically Chinese pavilion-style roof, and plenty more perfect symmetry. We saw prayers in progress in the main temple building, the one directly opposite as you enter the courtyard. There is a dining hall to the left, where you can order the monks’ typical vegetarian dishes. Around the back of the main hall, is the Hall of Ten Thousand Buddhas, a truly jaw-dropping building. The exterior of both buildings is richly decorated in a rainbow of colours, with dragons and lions making many appearances. But where the main hall resembles most other Buddhist temples, the Hall of Ten Thousand Buddhas is a lavish sea of gold. The ceiling is covered in elaborate patterns, and the walls are full of alcoves containing those thousands of little golden Buddhas. The centrepiece is of course, the five much larger statues of the Dhyani Buddhas – you can see their size in comparison to a monk featured in the last photo above. It is quite a spectacular sight to behold! 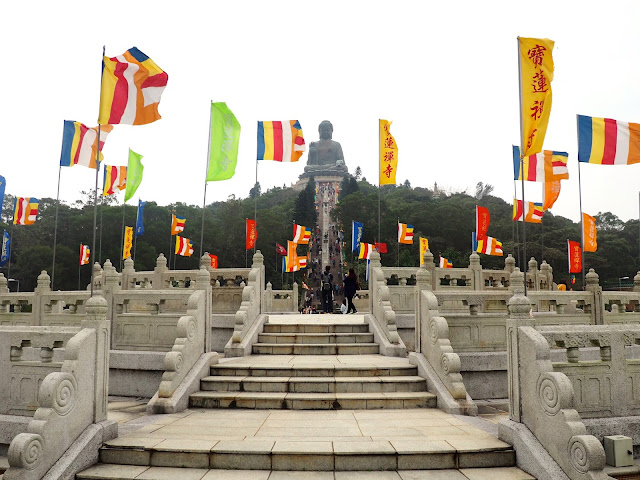 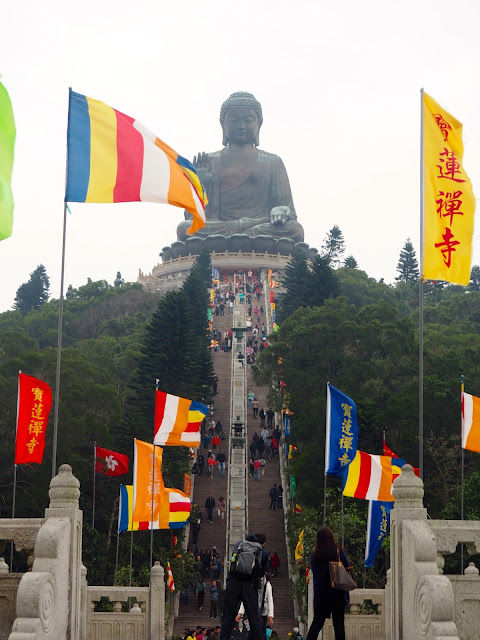 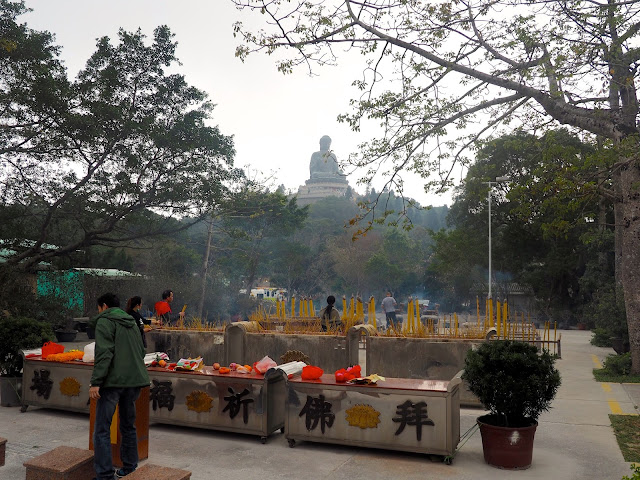 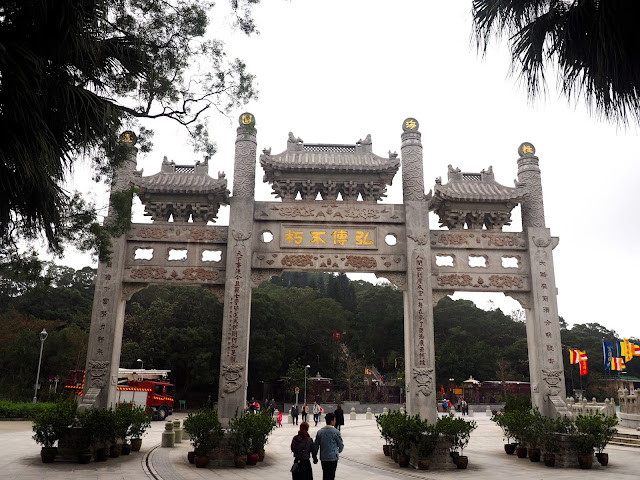 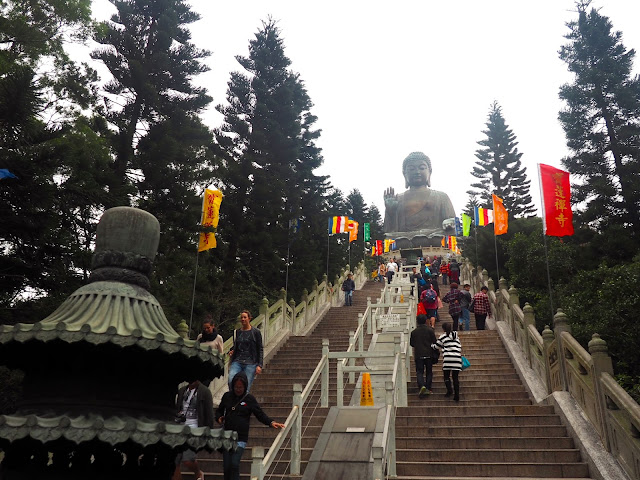 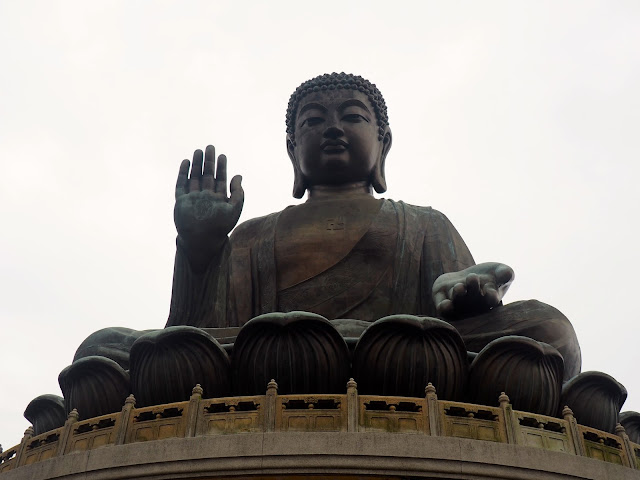 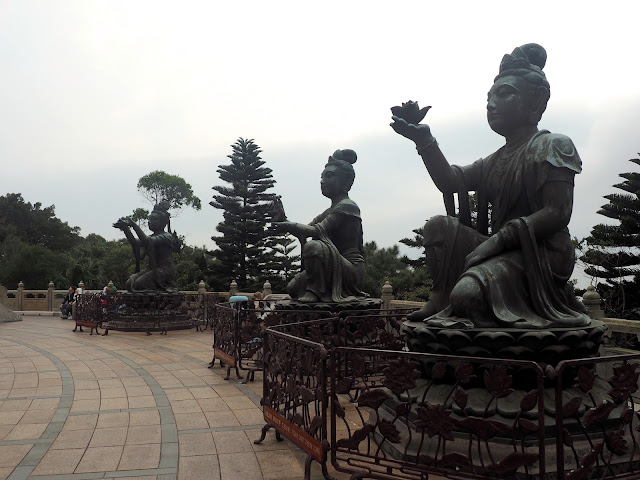 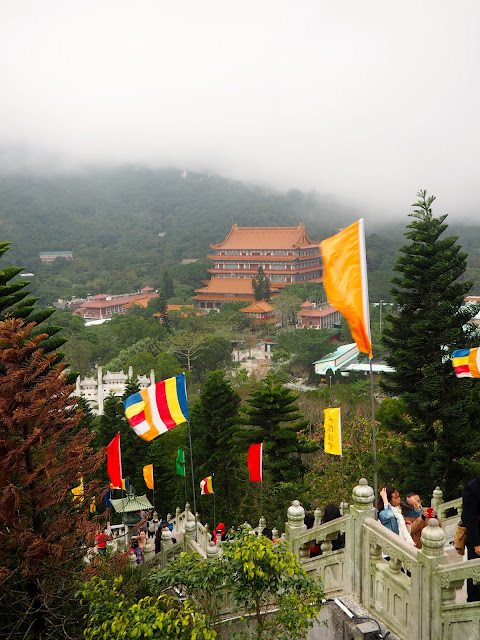 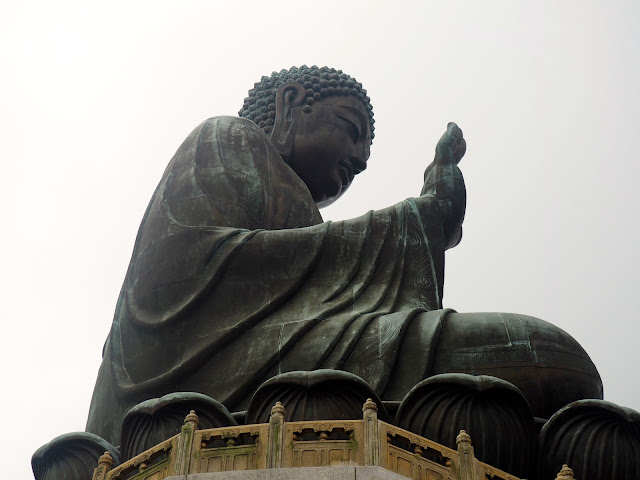 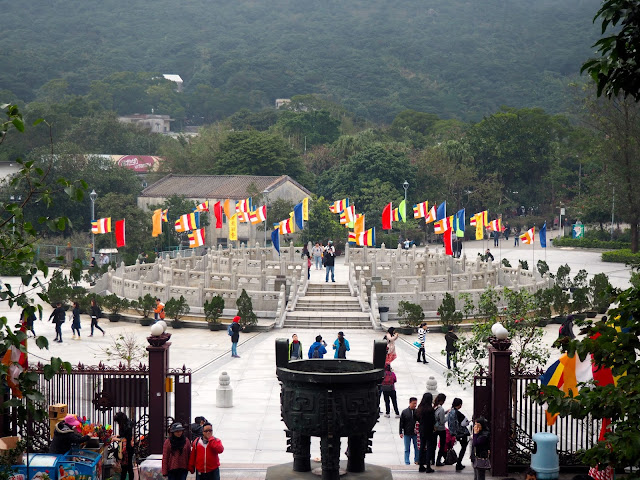 However, nothing can overshadow the vastness of the Big Buddha. We left the monastery and walked through the worship plaza, with yet more incense sticks, and passed under another grand archway. From there, it is 260 steps up the hills for a closer look at the Buddha. It’s certainly worth it though, for that close-up look at it, and you sort of have to climb up after coming all the way to Ngong Ping to see it. The lower podium is also host to the six Bodhissatva statues looking up at the Buddha. There are various chambers inside the statue, home to a museum and relics, but we didn’t go inside it on this visit. We did walk the circumference of the statue though, which would certainly offer some lovely views I’d guess, on a less cloudy day. We could look back down on the monastery though, and see the cable cars gliding through the clouds, between the hills in the distance. After some obligatory selfies in front of the statue, we descended the stairs again and went back down to the village, at which point we cancelled our planned hike since it was cold, cloudy, and starting to rain. It was still a good day out though, and I’m very glad that I finally got to see the Big Buddha in person.