A couple of months ago I wrote this post about some of the adorable and funny things my students get up to – for those who don’t know, I teach English to the nursery class of 2 year olds in a kindergarten. Of course, seeing around 50 of these kids on a daily basis means I have acquired even more stories about them, so I figured since the term is nearly over (1 more week!), I’d share a few more of them, for anyone who cares. I think some people I tell agree that they are adorable, while others are probably sick of hearing about them. But when you work 6 days a week, I don’t have a whole lot else in my life to talk about for now! 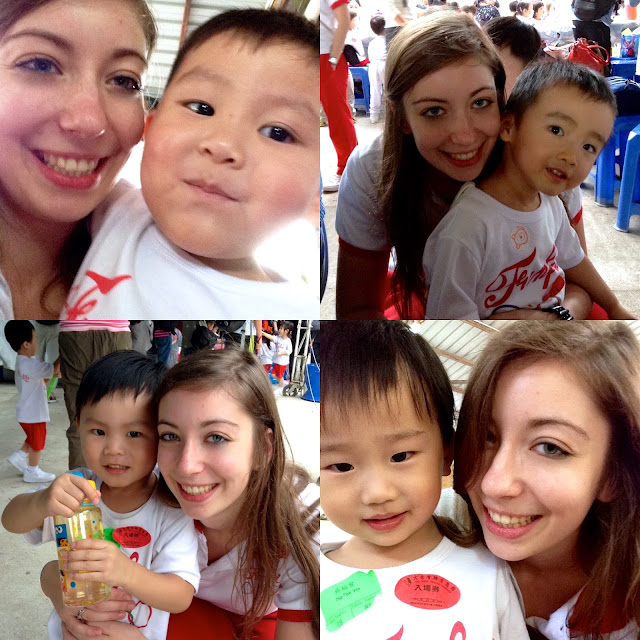 Hugs – all the hugs. The kids know me well now, so Ka Long will stop me in the hall every time I pass for a hug (usually lasting a long time), then Abby and Bosco join in too. And most of that class, as well as most of one of the other classes, have started piling on top of me with hugs at the end of each lesson. And Rafael climbed into my lap when he came into class one day.
Gabriel and Bryan will both occasionally see me and break away from their class to run down the hall to me – which they aren’t supposed to, but one is special needs and the other was premature so they don’t really understand. And it’s pretty cute. I also pick both of them up to play with a lot, and it stops them running off again.
Bryan also reaches out for me all the time, especially when he’s crying, but when he’s been naughty, his teacher says no, he can’t go to me. Our attempts to discipline him! His shorts also fall down all the time, to the point that one day his penis was sticking out the top, and we were all crying with laughter about it.
Gabriel is also so keen to take part now, and when he comes up at the wrong time, I ask if that is his name and he nods – so he now has about six names apparently!
Marcel went through a phase of responding with “eeeeee” whenever I said good morning to him – thankfully we’ve cut that out, but he now sings ABC song to himself every morning on his way in.
Ka Long thought my name was “good morning Miss Charlotte” for a while, as he would use the whole phrase when asking his teacher about me. We’ve tried to explain to him, but he’s now dropped most of it and just shouts “Charlotte!” at me all the time, forgetting the “Miss” part.
I steal the kids and we peek around the corners of classrooms at the rest of the class, and it has them giggling their heads off every time.
Tosca and Rex both dance when they get to stand at the front during singing, and it’s fantastic.
Baubau was crying in class one day, and Yu Kiu took the tissues and mopped up her face.
Hoi Kiu announced to us all one day that “My name is Charlotte” and she’s one of my favourites, so I think that’s awesome. And she’s one of the few kids who can tell you her name when you ask it in English.
Some of them have crushes on each other, and it doesn’t get much cuter than that:
Lucas tried to hold Abby’s hand during singing, but she keeps snatching it away. Pak Lam tried to do the same to Yu Ching, with the same result.
Ka Long always calls out Abby’s name, but he’s also good friends with Bercy, and the two of them are always holding hands, and she seems to get annoyed & jealous when he’s hugging me.
Yu Kiu was playing with Ho Shun’s bracelet one day, and they were smiling at each other, and another day she tried to hold his hand, but he seemed a bit confused by the attention!
Yin Kiu and Hei Tung were nearly caught kissing, as were Chi Him and Hoi Ching! But I haven’t seen anything else from them.
Jo Hong really likes Hin Ching – he pointed to her when I was choosing a Mary for him as the little lamb, and another time when they did the same song, she stood up before anyone else could volunteer etc. And their class teacher and the aunties sing the Wedding March around them.
Bryan doesn’t like any other kid in particular, but does frequently grab his classmates in hugs.
Hoi Kiu and Ho Wan used to pull faces at each other in singing, and would run round together during Skip to my Lou, but he has sadly left the school now.
At the school picnic, some kids would go shy around me – Ka Long ran up to me, but then wouldn’t speak or look me in the eye, and Gabriel shied away into his parents at first. Meanwhile Pak Yin peeked around someone else and yelled “Teacher!” and Rafael kept pointed at me. Later at lunchtime, Ka Long, Rafael, and Gabriel all kept coming to me and hugging me, and I ended up with all three piled on my lap.