I’ve been in Korea for just over two months now, and I thought it was about time to write an update about how everything is going here. I was going to write this last week, until I got sick over the weekend – read my last post about the school Halloween party for more on that… I’ve written a few times about places around Busan, like the Nampo area where I live, and what my work days are like. I’ve been lucky enough to have attended a couple of festivals, and got to go up to Seoul during the 5 day Chuseok holiday back in September. However, all of these things make life sound really fun, which it obviously isn’t every single day! So in this post I’ll be covering more about what day-to-day life is like. Also, can you believe a year ago I was writing this same update about my first couple of months in Hong Kong? Life has been crazy this year! 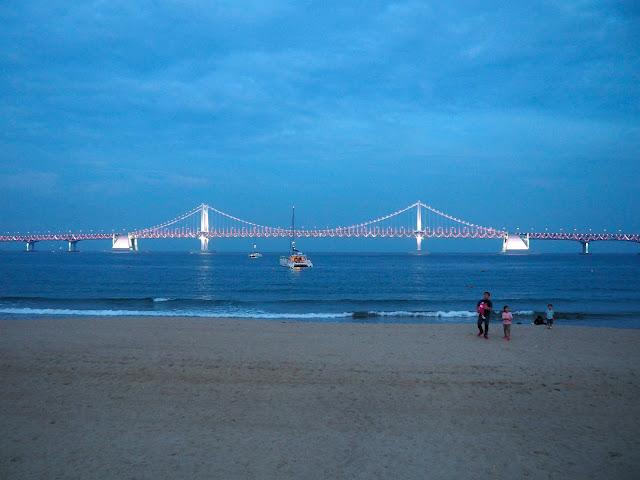 I thought moving to Korea would be easier than the move to Hong Kong was, since I’d already done a year in Asia, so it wouldn’t be quite as foreign to me. This was partly true, but there were plenty of things that were still new to me! And of course, moving to any new country comes with a lot of paperwork, and my first few weeks included several trips to the hospital, the immigration office, the bank, and various shops, while I settled in. Then, I was able to start acclimatising to the city. My immediate reaction to Busan, which still holds true, was that it is so much smaller and more spaced out than Hong Kong. It’s nice to feel like I have a little more room to breathe, but I do feel like it’s a little boring in comparison, and still lacking the vibrancy and character that Hong Kong had, and that even Edinburgh has, which I was hoping to find but have yet to discover here. Similarly, the architecture is very bland, after Edinburgh’s beautiful old-fashioned cobbled streets, and Hong Kong’s staggering skyscrapers, this crazy, jumbled mix of modern and old. However, I’ve been exploring more parts of the city, and I do enjoy having easy access to the beaches, possibilities for hiking (though I’ve yet to actually do any here), and plenty of shops, restaurants and cafes to choose from. It does feel like it takes longer to get places, even though I live fairly centrally, but that’s a result of living somewhere as compact as Hong Kong. I’m enjoying the weather so far though, as we’ve had lots of dry, sunny days (apart from the typhoon a few weeks ago, and I could live without the earthquakes!), and even now it’s getting colder I’m still ok with that, as I like winter, and didn’t get a proper one last year! Overall, it’s not a city I rate as highly as my previous homes, Edinburgh and Hong Kong, but it’s still got plenty to offer, and I’m content to stay here for a year. 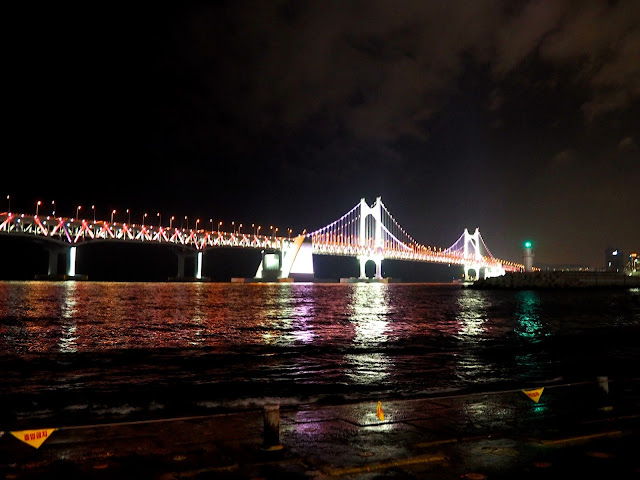 There are definitely some cultural aspects to get used to too. I mentioned in my ‘First Impressions’ post that the language barrier is more of a problem here than it was in Hong Kong, as they’re so reluctant, or unable, to speak English. I’ve learned to read Hangul now, though I’m still slow, and that can be very helpful as many words are the same once you read them – for instance, there’s tomato salsa in my cupboard, and the Hangul reads perfectly as “tomato salsa”, followed by Hangul reading as “orijinal”, which is pretty easy to figure out. I still prefer to have someone who knows at least basic Korean with me when ordering in restaurants and anything more complicated, as that’s still beyond my capabilities, but many foreigners pick up enough Korean to get by – hopefully I will eventually! The Western influence here is also very clearly American, particularly in terms of the brands available, and I’ve met more Americans than any other nationality here (besides Korean obviously), which is noticeable compared to Hong Kong, where it was more multicultural, and even the Western influence was from various countries (especially the UK). Some things are similar to what I encountered in Hong Kong – for instance, family is considered very important, which is nice, but there is also the expectation for women to marry and have children. For me, in daily life, I don’t find this particularly problematic, especially since they don’t hold foreigners to the same local standards (though I have been asked if I’m married or at least have a boyfriend many times already!), but it’s certainly not something I’m entirely comfortable with in general. Couples culture is huge here too, and you see many young couples practically joined at the hip and wearing matching outfits. There’s also a large focus on physical appearance, which I encountered in Hong Kong too – they’re much more open about commenting on your appearance, and not always positively, especially the kids. I’ve gotten used to this, and really don’t care anymore, but you will see many adverts here for plastic surgery, which is a huge industry here. I do find it problematic that this has become such an accepted, and almost expected, part of the culture here – though again, there is no such expectation for me, being a foreigner. None of these are things that cause me troubles in my daily life, but they are interesting to observe, and a large part of the reason I live abroad is to understand and experience other cultures. I only mention these aspects, as they are the ones that have struck me the most so far. 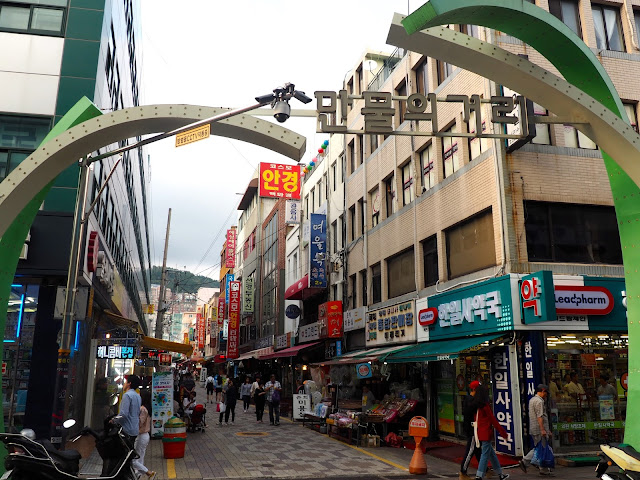 The school system is also something that foreigners have to adapt to, as children here are in school for far more hours each week than I ever was. I work in a hagwon, a private school, and while it is the main/only school that our kindergarten classes (3-6 year olds) attend, for our elementary students, we provide supplementary classes. From the age of about 7 (Korean 8), children attend public schools through the day, often starting at 8am, and then afterwards go to private hagwons for other classes, ranging from supplementary English and other academics, to hobbies like sports and music, which can last until 9 or 10pm at night. They’re long, busy days for many of them, so it can be difficult to keep them engaged in classes. I find those who do extra-curricular activities are easier to manage though, compared to those who do academic-style classes all day long. I also avoid giving excessive homework, since I know how busy they are, and only give it to them when they have been absent and need to catch-up, or didn’t finish the work started in class. I’ve gotten used to work now though, and I feel more on top of what I’m doing in each class. I do teach 7-8 classes everyday though, and I know that they aren’t always the most fun or exciting, as I’ve just got so many to plan and prepare for. The students are also expected to complete their textbooks, with no missing pages, so that has to take precedence over other activities, so I normally use those as a reward at the end when the book pages for the day have been completed. The students themselves have taken some getting used to as well, as the discipline is not as strict as I’d gotten used to in Hong Kong, and it’s difficult to change their behaviours when they’re older as well. I do find many of my students to be less respectful than I’d like, but I’m just having to figure out ways to manage them, and the more time passes, the more they are getting used to my methods and expectations of them. I’ve concluded though, that this is not my age range. I’d rather work with toddlers, like last year, or teenagers, like my summer school back in the UK, but not this in between primary age. That said, I’m pretty sure I’m not going to be a teacher once I’m done with ESL jobs! The staff has changed a bit since I started too, with two new English teachers arriving recently, and I like not being the newbie anymore! They’re nice too, and easy to chat to, which makes the atmosphere more enjoyable when we’re in the office or on activities together. 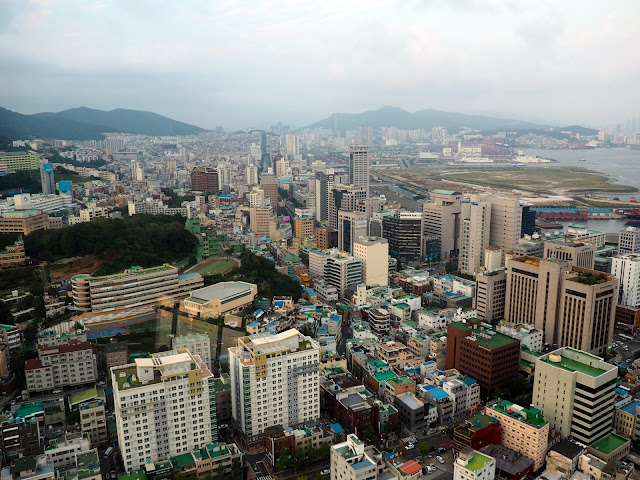 Work is the bulk of my life throughout the week, but I’m definitely enjoying having a 2 day weekend again, as it gives me back not only my Saturday mornings, which I had to work last year, but also my Friday nights, since I don’t have to worry about getting up the next morning. Meeting people was tough at first, because last year I was immediately introduced to others working for the same agency as me, and didn’t have that option last year. As mentioned, the other teachers at work are nice, but we all have our own lives away from the school. I have managed to make friends though, with initial introductions mostly coming from apps and events online, and then me forcing myself to be brave enough to go out. I’m not the sort to go to a bar alone ever, but going there to meet someone, then having a few drinks, allowed me to be confident enough to start chatting to others, and then you start to find the ones who you’re going to be closer friends with. There’s now the larger group of people that I’ll see from time to time, typically when out drinking, and then the couple of closer ones that I make plans with to see more regularly. My weekends normally included some drinks or a catchup over coffee (I’m planning to blog about some of the cute cafes we’ve found in future!), and I’ll try to find time to explore different parts of the city, whether it’s a general area or a specific (often tourist-y) site. Hiking is something I’m yet to get back to, and I’m keen to visit some of the surrounding cities in future, since Korea is small enough to travel from place to place in just a few hours, but I’ve got plenty of time still for those! 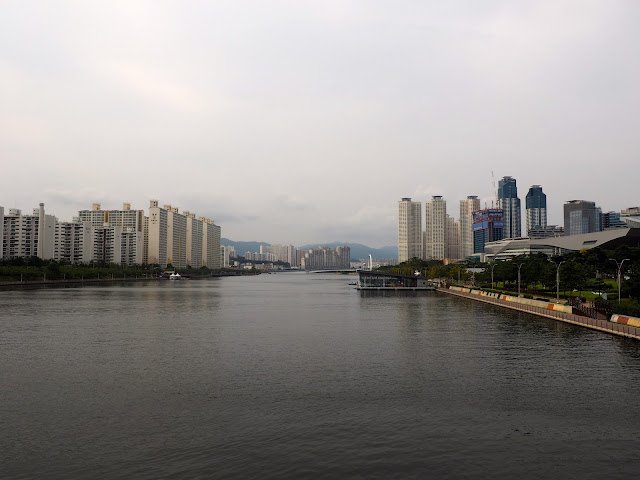 Overall, I’m getting there. That’s the best way to sum it up (since this post has come out so long!). It’s difficult, when I just left a place I loved so much, and a wonderful group of friends, and my darling little students. It’s hard for anywhere to match up to that now, and in those first few weeks I was convinced I was going to be going home, or back to Hong Kong before the year was up. I think I kept telling myself the move would be hard, but I’d done it before so this time would be a little easier, so I was shocked at how hard it still was, and how much it affected me. But with time, it gets easier. Work is more comfortable, I’ve met other people now, and I know my way around the city a bit better. We’re still a long way from Busan being somewhere as great as Hong Kong or Edinburgh, but for now, it’s pretty good.