Last weekend I spent my Saturday afternoon with a friend, and we headed to Nan Lian Gardens, on the recommendation of some other teachers. It was an absolutely beautiful sunny day, though pretty hot, but it was lovely to find somewhere outside to enjoy it. The gardens were stunning, an idyllic little patch of green amidst the massive skyscrapers of the city. One of the more interesting features were the rocks puffing out clouds of steam – not very sure why, but it was different! The orange traditional-style pavilion in the centre of a pond was certainly a photo-worthy centrepiece to the place, standing out amidst the greenery. There were also some cute water features, including a couple of waterfalls, and a water wheel, with plenty of other pavilions and arches. These made a welcome change to see a more traditional style in the middle of a very modern city. 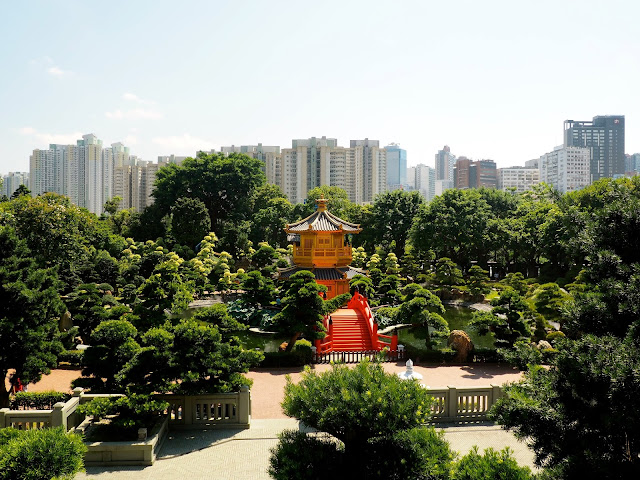 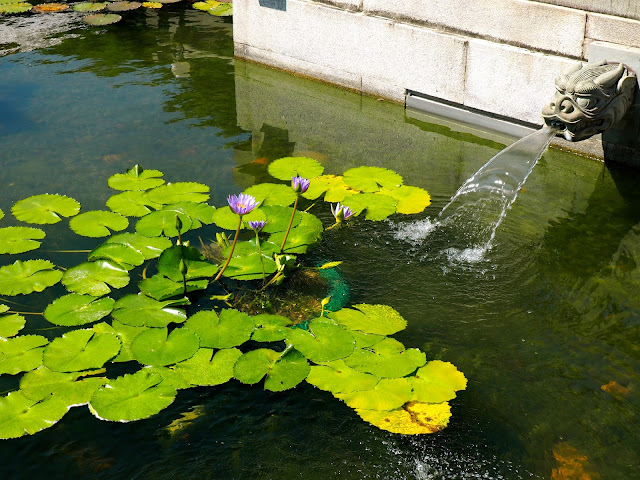 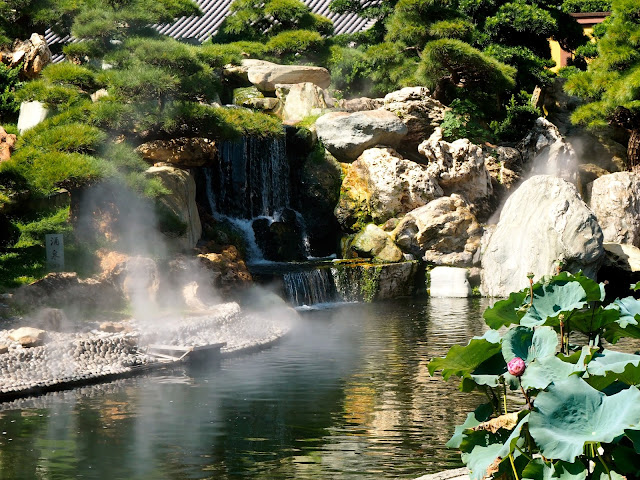 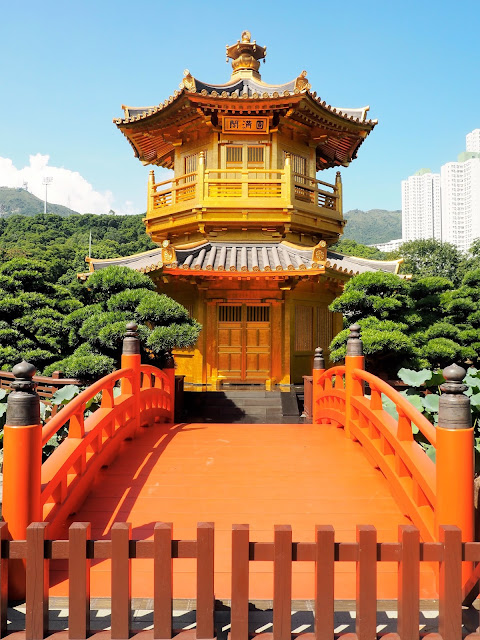 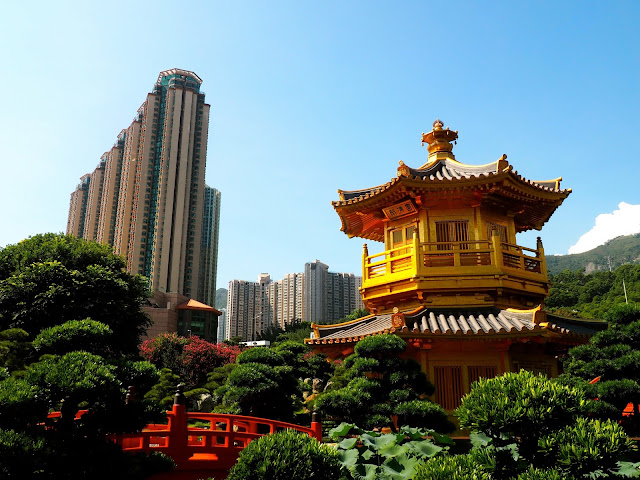 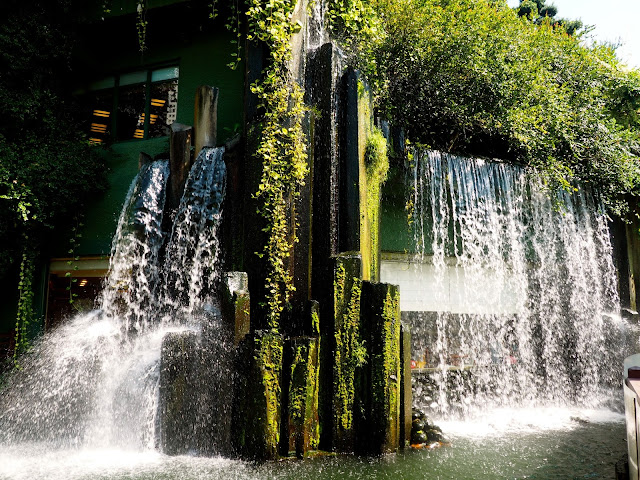 One of the major highlights in the gardens though is the Chi Lin Nunnery, a collection of Buddhist temples. The buildings themselves were beautiful, and if it weren’t for the city skyline in the background, you could have sworn we were in some remote mountain retreat. Inside was even more spectacular though (photos weren’t allowed unfortunately), as there are several stunning Buddha statues, culminating in the most spectacular one, featuring five figures, and all decked out in gold. I can’t describe it to fully do it justice, but it was breathtaking to duck under the archway and just see this huge mass of gold, with this huge deity at the centre. There was a very peaceful atmosphere to the temple too, as is only befitting, and although I’m not overly religious, it felt like a very spiritual place. There were lots of people praying to the statues, and chanting was playing in the background. I’m certainly intrigued to find out more about Buddhism after this visit, especially as it’s a major religion here, with plenty of other temples in the city. 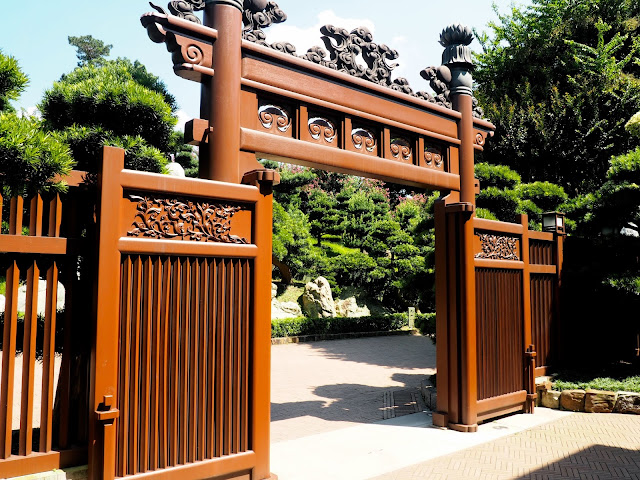 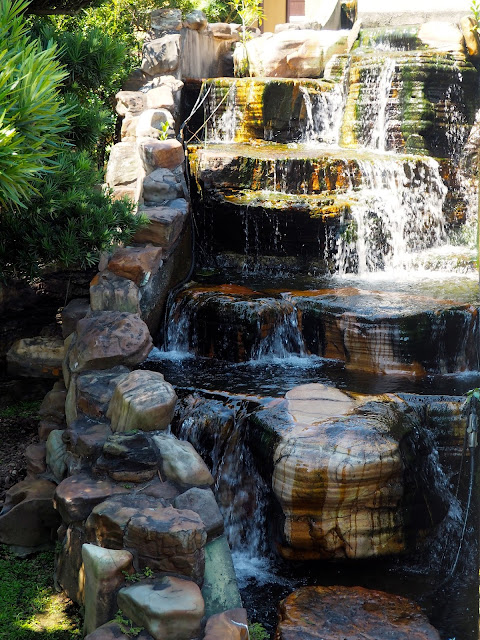 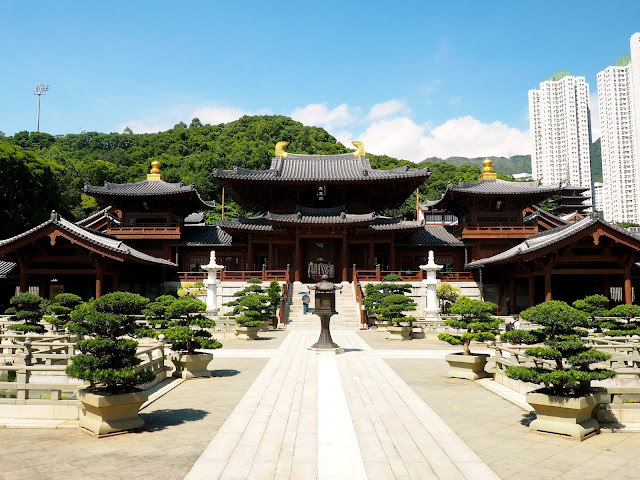 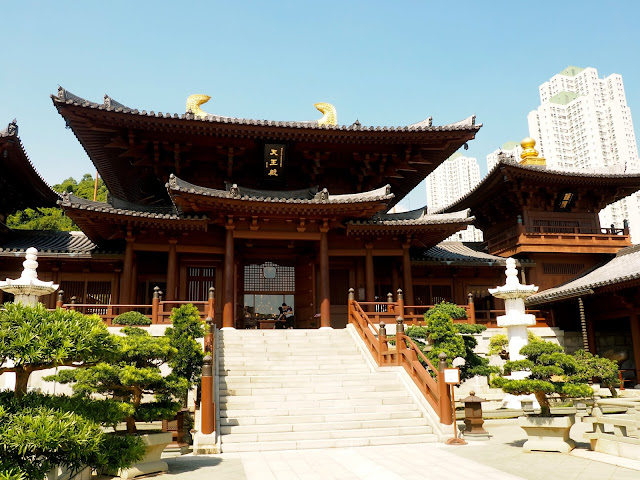 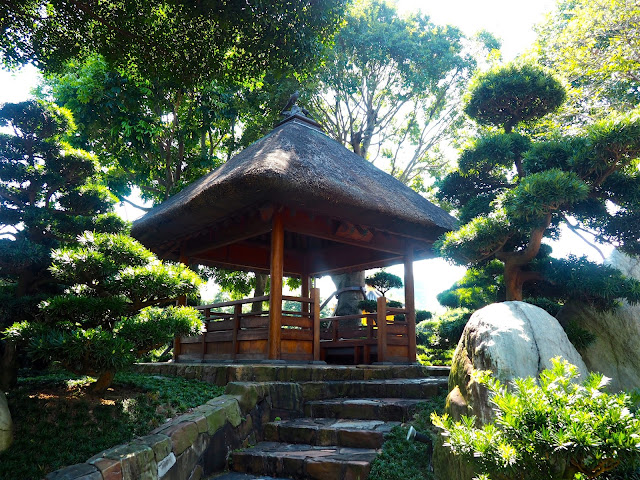 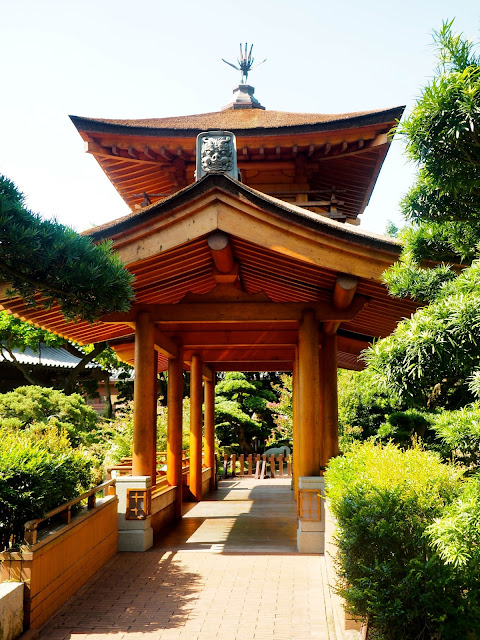 Later, after a few hours to unwind, we met up with a few others and went down to the Tsim Sha Tsui promenade (which I visited during the day the week before) after dark, to watch the Hong Kong light show, A Symphony of Lights, which takes place every night at 8pm. Saturday is a Mandarin language night, so I didn’t understand the commentary, but we still got the music and lights. You can watch the show from either side of the harbour, but I think we chose the right side, as the view of the main island’s skyline is more iconic. Even before the show started, the harbour is a spectacular display of coloured lights – the show itself was actually a little disappointing when you realise the city is always lit up so brightly. It was still nice to go see it though, and we ended up sitting by the harbour for even longer, having a few drinks while admiring the view (we’re all big fans of the fact that it’s legal to drink in public here, though it’s not that new to me after living in Edinburgh), and watching the boats sail by, including some traditional Chinese junk boats. A very pleasant way to spend an evening! 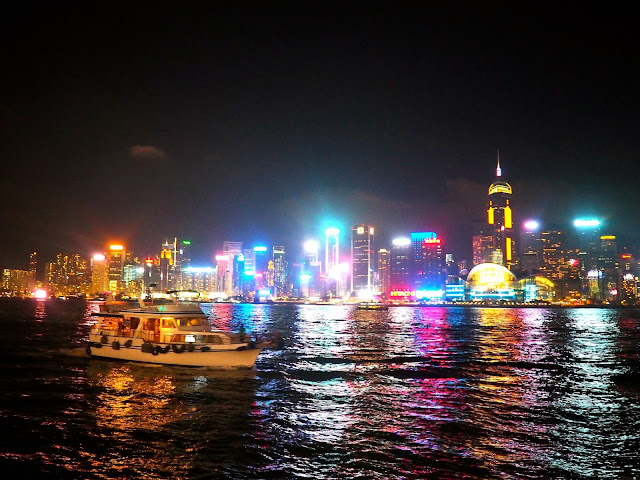 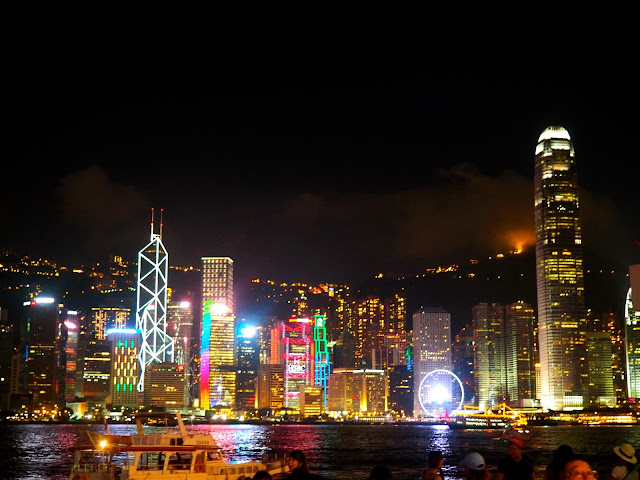 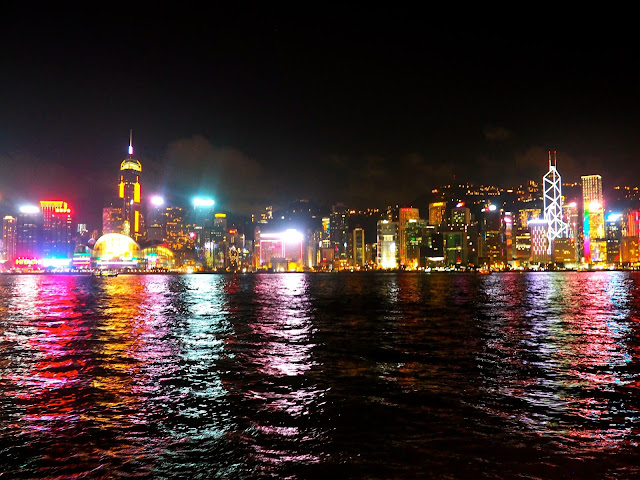 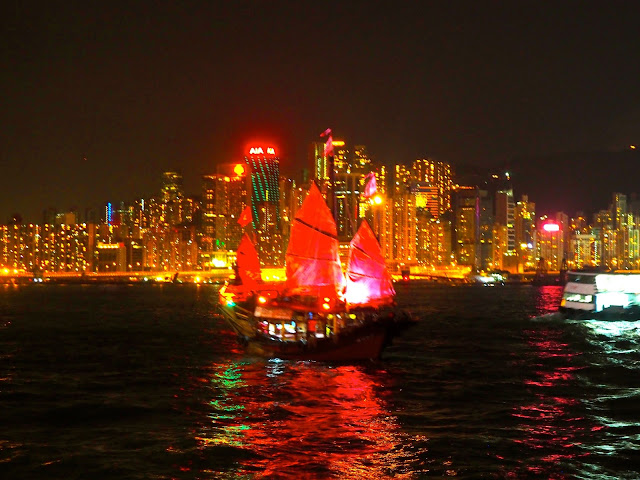 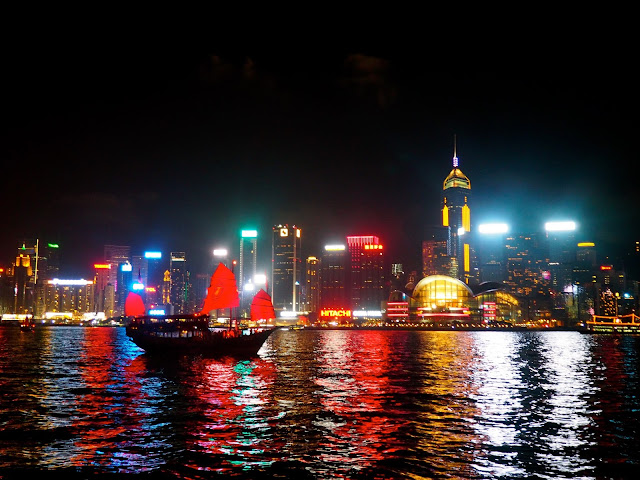 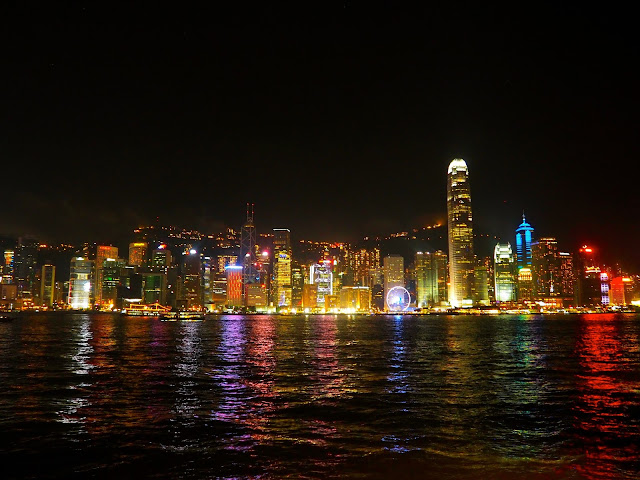