Despite not being a particularly religious person, I do find the notion of religion, and the many different faiths that exist around the world quite interesting. Having grown up in a largely Christian community, in a country whose dominant religion is also Christianity, I’m fascinated to now be living in a city where so many different religions co-exist. Even the school I work in, which calls itself Christian, celebrates Christmas and Easter, but also Chinese holidays like Lunar New Year and the upcoming Mid-Autumn Festival. Having visited many cathedrals across Europe, I thought I’d take a look at some of the oldest places of worship on Hong Kong Island. 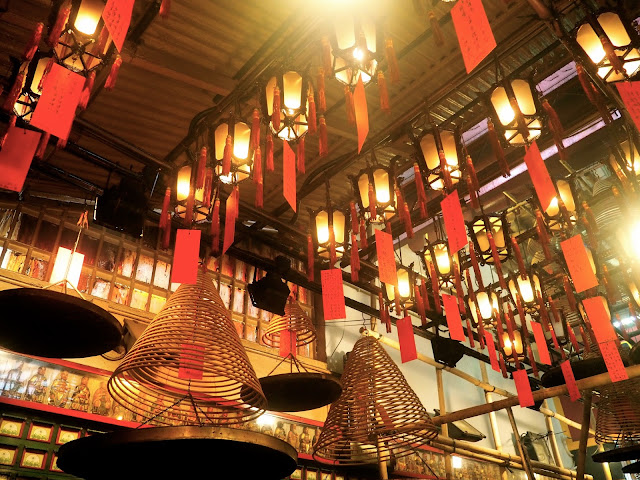 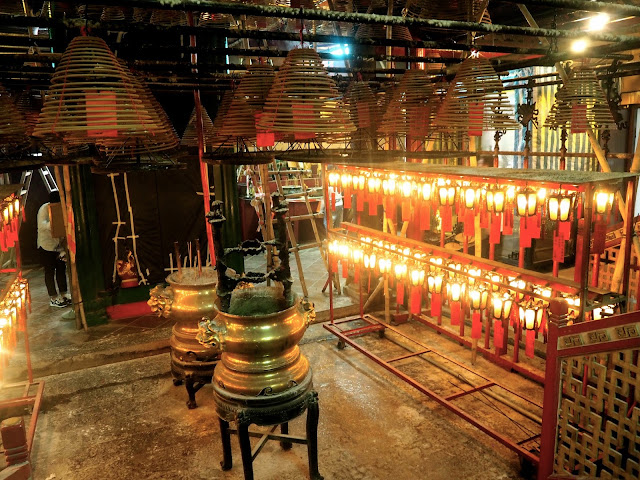 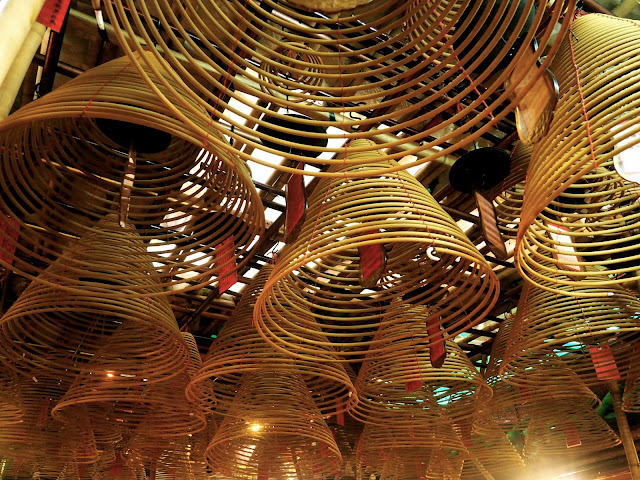 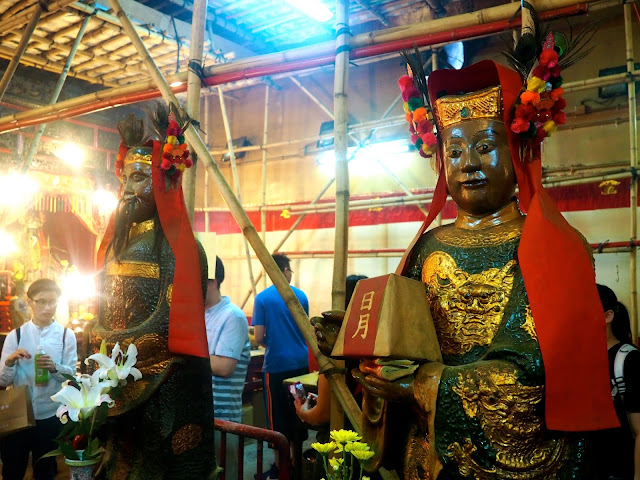 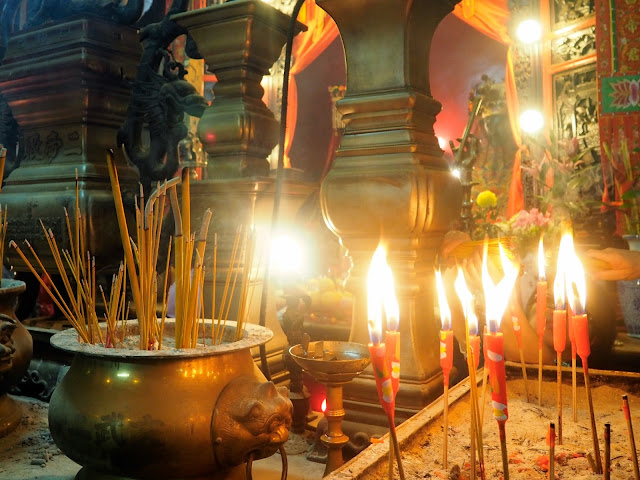 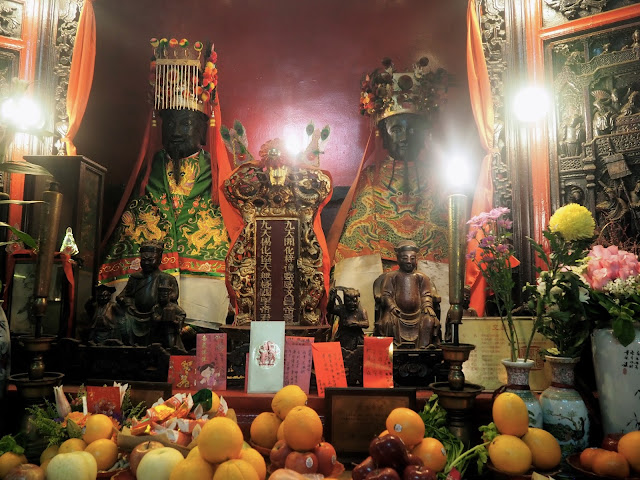 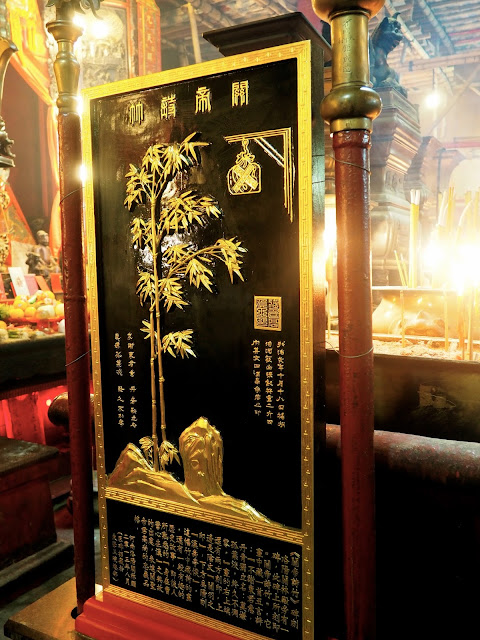 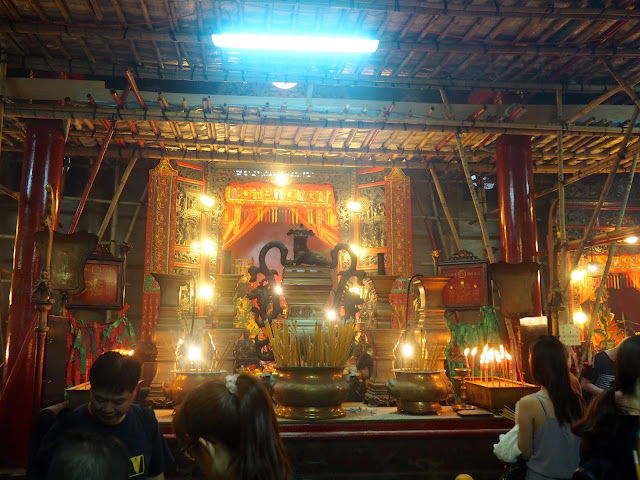 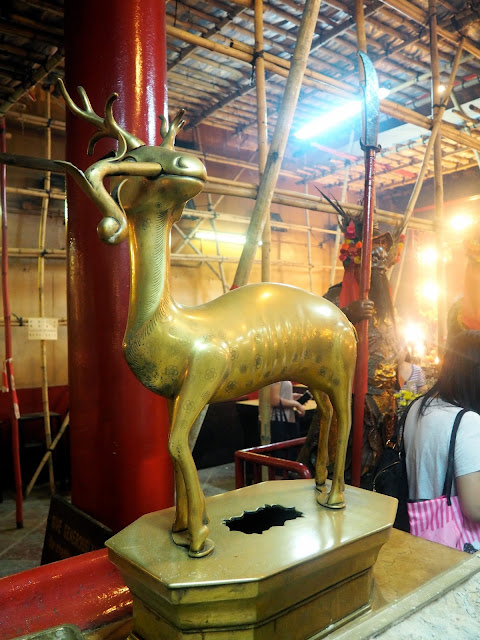 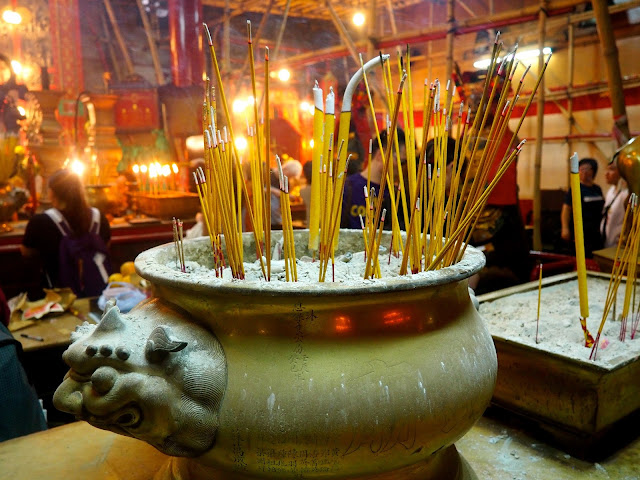 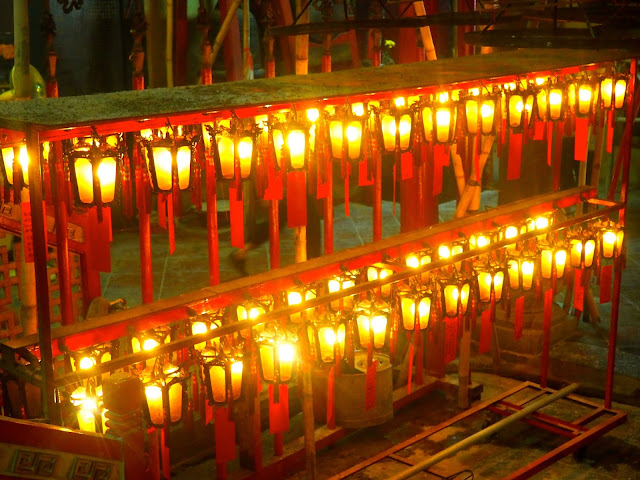 My first stop was a temple you’ll find listed in every guide of things to do in Hong Kong. Man Mo Temple is one of the oldest temples (if not the oldest – the internet contradicts itself!) in the city, right in the heart of Sheung Wan, and is popular with tourists and locals alike. Chinese religion is a mix of Buddhism, Taoism and Confucianism, and Man Mo is a Taoist temple, dedicated to the Gods of Literature (Man Cheong) and Martial Arts (Mo Tai). Outside, it isn’t anything remarkable to look at (though it was covered in scaffolding when I saw it), and neither is the inside from an architectural perspective. However, the atmosphere inside is unlike anything I’ve encountered before. The whole room is pungent with the fumes of dozens of incense spirals hanging from the ceiling, and people burning handfuls of incense sticks in worship. Everything you look there is light, from candles and lanterns, enhanced by the predominantly red and gold decor. It’s not a big space, and is packed with people praying and moving from one icon to the next, making the atmosphere feel even headier and hotter. Every corner has statues, in displays with elaborately patterned fabrics, and multitudes of fruits, flowers and ornaments. Prayers seem to be personal events too – as far as I can tell, there’s no sort of service, like I’m used to in Christian churches. Anyway, it was a fascinating place to look around, and see a totally different kind of religion. 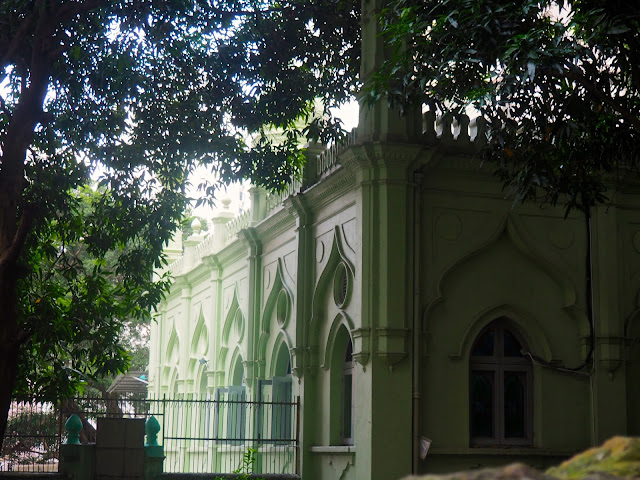 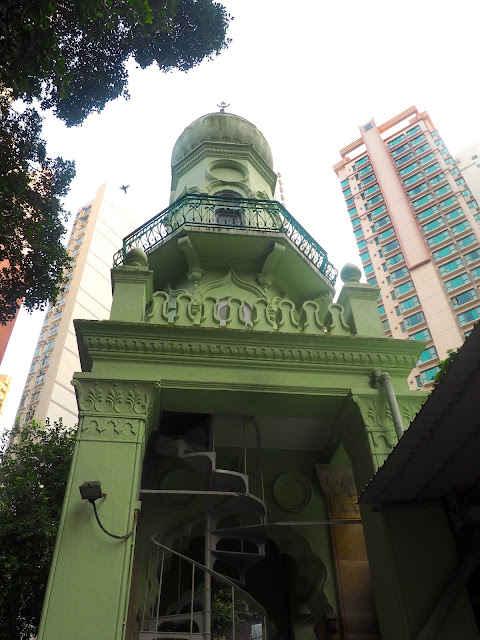 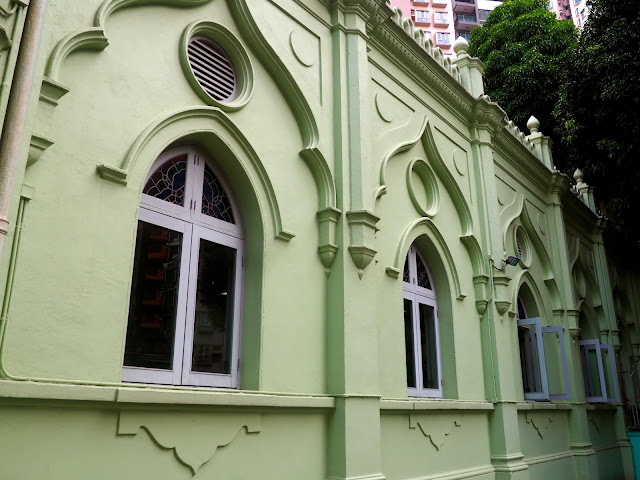 Next I wandered through Central to find Jamia Mosque, known for being the oldest mosque in Hong Kong. I was taught about Islam (and all other major religions) in school, though I only remember handfuls of it. I’d read on a few sites that they don’t tend to allow non-Muslims inside the prayer rooms (though other sites contradicted this), and as its not really a tourist attraction like man Mo, where I was obviously a tourist, but accepted as such, I thought I’d stand out a lot, so I opted to just admire from the outside instead. It’s tucked away in its own little garden, though of course you can still see the surrounding skyscrapers on every side. The most remarkable thing to me were the bright green walls, which seemed quite unusual, though very pretty. It was a lovely building on the whole, certainly compared to the surrounding, modern architecture, with delicate its ornamentation and a beautiful minaret, and there was a sense of peace around the place, despite being in the heart of such a hectic city. 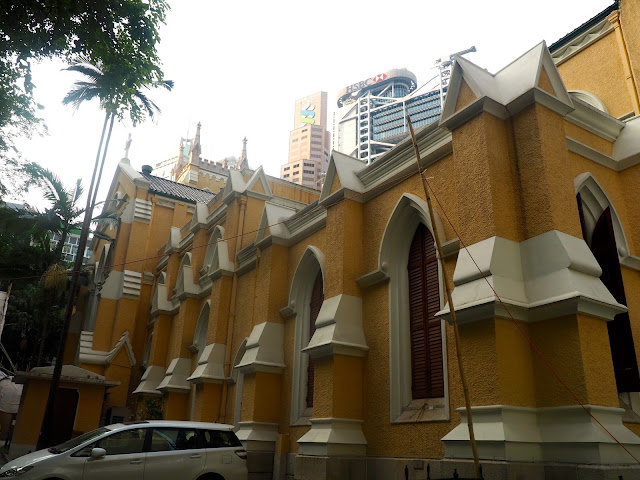 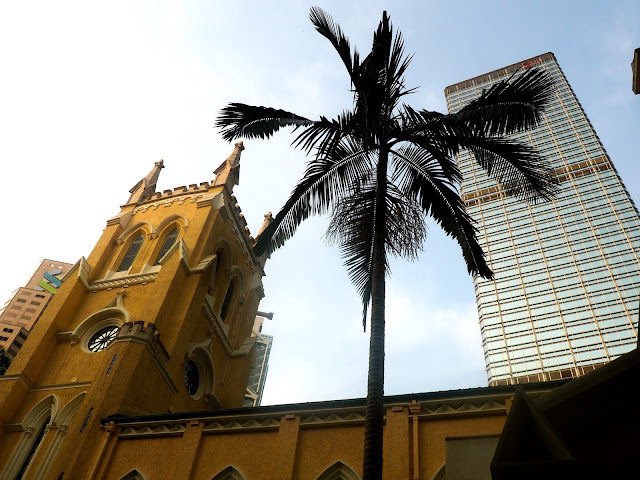 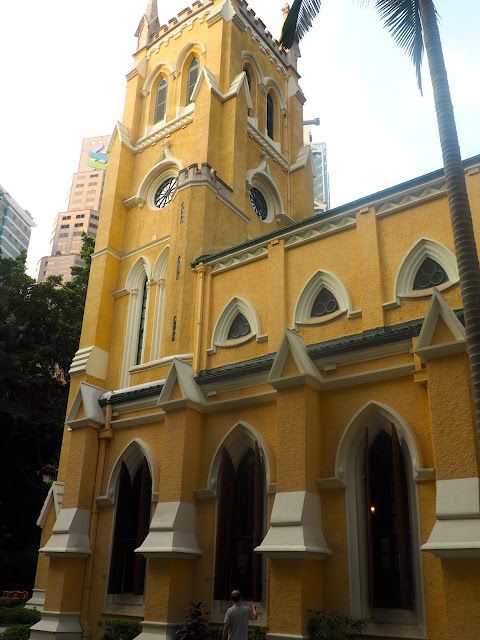 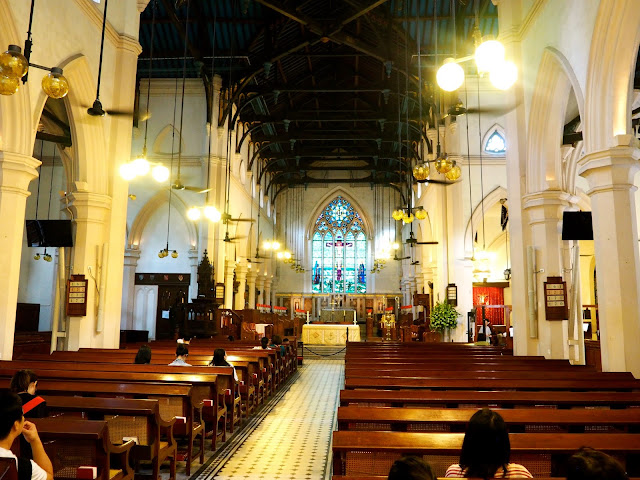 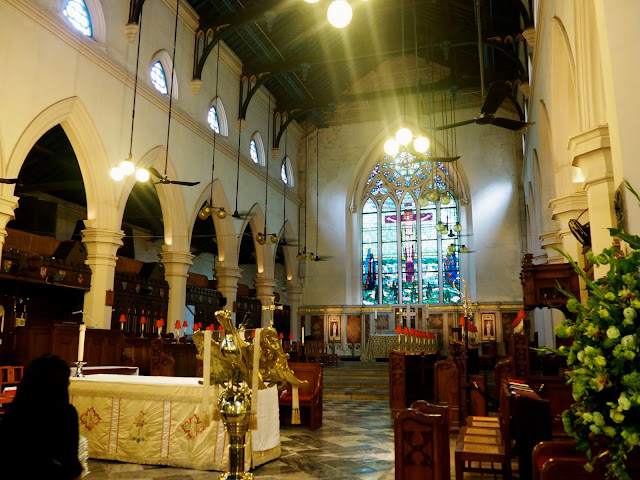 Finally, I wound my way down to St John’s Cathedral, not only the oldest cathedral in Hong Kong, but also the oldest Western ecclesiastic building in the Far East. From the outside, it immediately resembled the cathedrals I’m familiar with, particularly due to the tall bell tower, though the bright yellow walls were perhaps a little more unusual (my first thought of cathedrals are the Gothic French ones). It stands out as being very different, as its right in the heart of Central, with some of Hong Kong’s most iconic skyscrapers right outside the door (annoyingly, its small grounds, due to the other buildings, make it difficult to get good photos since you can’t stand very far back). The atmosphere inside was also more familiar to me, calm and peaceful, a million miles from the heady, aromatic, bustling Man Mo Temple. The layout was as expected too, but on the whole, the interior was quite disappointing – very sparse and plain, though that’s coming from someone who is more familiar with the elaborate and beautifully crafted cathedrals of Europe. This one just seemed a bit dull and lacklustre in comparison. And although I don’t consider myself very religious, I do associate with Christianity the most, it being what I was raised with, so I felt comfortable enough to enter (unlike at the mosque). Yet I immediately became uncomfortable when I garnered the stares of all the locals inside. I obviously stood out as a Westerner, in a non-tourist-type place, yet I’ve never felt so out of place in a place of my ‘own’ religion! It was a bizarre experience, but regardless, I’m glad I saw what a Christian site looks like here.