A-Z of My Bookcase

I’m back home with my family for a few weeks at the moment, so of course I’m staying in my old bedroom. I never fully moved out for university, and I suspect it will be a while before I do in future, so this room is crammed with basically every possession I have – including a fairly impressive collection of books. Most of the shelves are stacked double to accommodate them all! And there’s everything from childhood favourites, to books bought for my degree. So today we’re having a little A-Z tour of them – discounting the words ‘A’ and ‘The’ though, or we’d never get the whole alphabet in! (Amazon links included) 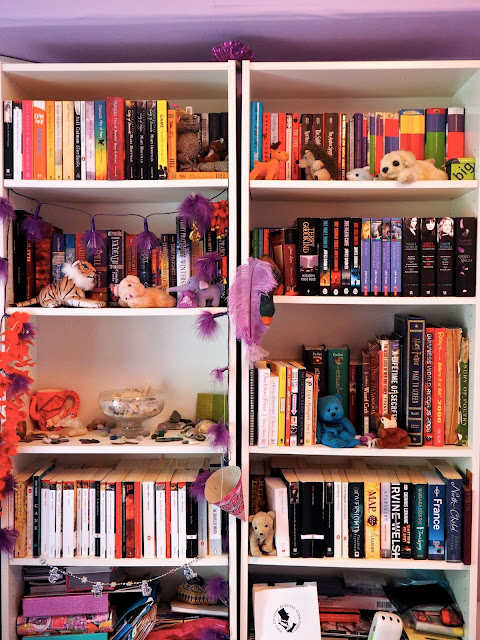 by Karen McCombie
A friend got me reading these when we were younger, and I wound up buying the whole series eventually. Funny, quirky, and relatable, these were great for my early-mid teen years, and I’d happily re-visit them now.

by Clare Chambers
This is another teen read, about two sisters sent to stay with their aunt in Brighton, for their safety. I don’t remember a lot about the plot, but there were plenty of fun adventures along the way.

C – The Chronicles of Narnia

by C.S. Lewis
Is there anyone who didn’t read at least The Lion, the Witch, and the Wardrobe as a child? I read the whole series, as I was nuts for all things fantasy, so these were a natural choice for me!

by Rachel Cohn & David Levithan
Probably not as well known as another collaboration by these two (Nick & Norah’s Infinite Playlist), but I needed the letter D! I like the back and forth narrative between the two characters, and I found it particularly effective in this book, as they don’t meet for a long time, so we get to know both of them individually.

by Jane Austen
I’m not a huge Austen fan, but as an English student I’ve read a few of them. I tend to like the storyline, but not so much the writing style, but anyway, I think Emma is my favourite I’ve read so far. It certainly has some of my favourite adaptations too! (Clueless anyone?)

F – The Fault in Our Stars

by John Green
The most well-known Green novel, yet not my favourite (that honour goes to Paper Towns) – I was trying to fill letters here! It’s a touching story though, probably the most sentimental of his novels, and certainly worth a read for YA fans.

by Lois Lowry
I wish I had read this book sooner! I only found it a couple of years ago. Dystopian novels are great at making me really think, but it’s rare that I really enjoy one as much as I did this one, and it’s a good introduction to the genre for younger readers.

by J.K. Rowling
I read this series avidly as a child – as many people my age also did, I’m sure! – and it certainly played a role in sparking my love of reading, particularly fantasy novels. While I’m by no means a die-hard fan, and it’s been many years since I read them, they remain a nostalgic and fairly important part of my childhood.

by Cornelia Funke
A man who can read characters to life – what book lover wouldn’t want to give this a try? Another favourite fantasy novel of mine, I was fascinated by this book – just don’t watch the film, not one of the better adaptations out there!

by Charlotte Brontë
This was one of my first forays into classic literature. I chose it because of my own name – Charlotte Jane – as it seemed fitting, and ended up really enjoying it. It’s got a bit of everything, and I never saw the gothic twist coming!

K – Kissed by an Angel

by Elizabeth Chandler
This came during my supernatural romance phase (I was in my mid-teens when that craze hit, of course I read some!). A girl’s dead boyfriend visits her as an angel… yes, sounds a bit ridiculous to me now, but it was one of the better of that genre (and I need the letter K!).

L – The Lord of The Rings

by J.R.R. Tolkien
A series that needs little introduction, and I could hardly call myself a fantasy novel fan if I didn’t have these! They are a long slog to read, and I know many who actually prefer the films, but the novels are definitely worth a try.

by James Dashner
I was pleasantly surprised by how much I liked this series, as I’d been avoiding much of the YA dystopia of recent years (I liked but didn’t love The Hunger Games). I think it was the mystery that drew me in – why are these boys trapped in a maze?), and the action carried me on. The whole series is good, but the first novel is definitely my favourite.

by Philip Pullman
The entire His Dark Materials trilogy is simply excellent. It is fantasy from the get-go, which is why I picked it up, but there’s some huge philosophical questions in there that fascinated me, and made me think more than I ever had at that age (pre-teen I think).

by Jack Kerouac
I know some people who really aren’t fans of this book. I read it myself at university, then again for a class, and I really enjoyed it. Hedonistic, reckless road tripping through America, it’s all about escapism, a concept I probably enjoy too much.

P – The Perks of Being a Wallflower

by Stephen Chbosky
I adore Charlie, the protagonist. Reading his letters makes you feel like he’s a friend confiding in you, and his struggles are so relatable. We’ve all felt a little awkward at times, and this is definitely one of my favourite coming-of-age type novels.

R – The Ruby in the Smoke

by Philip Pullman
I didn’t realise I had two Pullman series in here at first, but I often forget they’re both by him, as they’re quite different. I like mysteries, and I was reading lots of historical type books at the time – throw in a clever female lead, and I was sold!

by Mary Hoffman
Yet another fantasy choice, about teenagers who can travel between realms to an alternate 16th century Italy. There’s plenty of action, romance and political tension to fill the plot of each book, although the first is my favourite, making me long to visit Venice (which didn’t disappoint!) and features my two favourite characters of the series.

by Irvine Welsh
A classic of Scotland these days, with it’s dark and brutal plot. Everyone was watching the film when I started university, being set in Edinburgh, and eventually I got around to the book, which I liked, but it’s not my usual fare. And even as a Scot, it takes a little while to get used to reading the dialect!

by James Joyce
I had to read this for university, and my god, it took me forever! I’m proud I’ve read it all though. The length is obviously part of this, and although I appreciate the literary significance of the writing style, I found it very difficult to get into. Yes it’s a classic, but not one I’ll be picking up again!

by Lemony Snicket
Book 7 of A Series of Unfortunate Events, and my sneaky way of getting the letter V. I’ve read the whole series, and I love the unique style of the books, and the mystery and action within the plots. However, I did find the end a bit unsatisfactory, and the earlier books were better than the later ones.

by Terry Pratchett
I adore the Discworld books, with their hysterical humour, and wonderfully eclectic setting and characters. I haven’t read them all yet, but it was the Tiffany Aching & Wee Free Men books that first got me into the series, largely because the Nac Mac Feegle are simply hilarious!

X – Does anyone know of a book starting with X?

by Charlotte Perkins Gilman
Ok, I’m just trying to get as many letters as I can now. This is a short story, another book which I had to read for university. I don’t remember too much about it now, other than the titular story was very creepy and psychological.

What books are on your book shelves? And does anyone have any books starting with Q, X or Z?