Charlotte Musings & Thoughts, Other
The sun beats down hard, as if it were trying to burn through the ground. It’s hot, unusually hot for the city at any time of year, and the population is out in force, soaking up the rays while they last. The square is littered with people, perched on stairs or benches. Most look to be students; some have books lying around them, but most have given up the pretence of doing any work. Some of their eyes follow the skate-boarders lazily wheeling back and forth, occasionally attempting a trick off their makeshift cardboard ramps. The semester is nearly over, with long days of freedom stretching before them all, and the rare weather makes it that much harder to focus on their studies. One panicky fresher goes hurtling through the middle of the square, books and bags flying around her, disrupting the sleepy haze lying over the square – late for an exam perhaps? A second later she’s gone, and the scene returns to its stupor. 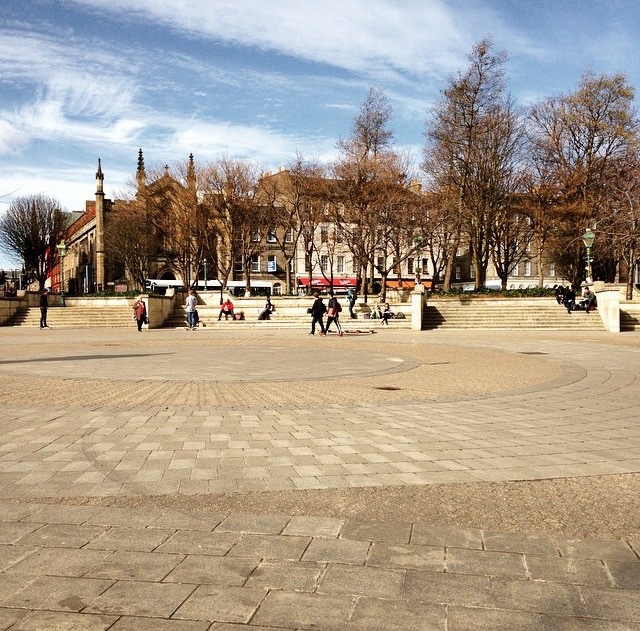 The seagulls swoop overhead, casting their shadows down below, and sometimes daring to venture close one individual or another to peck at a some discarded food or rubbish. There is no breeze today, uncharacteristic for a city so close to the sea, making the sun feel even hotter. The sounds of the city echo through the square; traffic rumbling along the road; voices chattering and shouting across the square; the gulls calling out from time to time; sometimes a siren blaring in the distance. It’s not a remarkable day by any means, in the grand scheme of things; life just continues to roll onwards.

Towering over the scene though, are two magnificent old buildings. One, with its gothic towers and spires and vaguely spooky facade, looks like a miniature castle transplanted into the middle of the city. The other has an air of nobility, clean and classic in style, curving in a grand, swooping circle. They stand like ancient markers, of knowledge, history and culture, watching over every new generation that passes before them. Each student’s time here is a mere blip in their lifespan, experiencing only a flash of the wisdom and experience that they have borne witness to. They were here long before them all, and they will continue to be there long after.