The Jonas Brothers are back, so of course we had to go see them! Well, I say ‘of course’, had you asked me that a few years ago I may not have been so bothered. But I’m very glad we went in the end, as it was a really great show, and a great mix of nostalgia from ten years ago, plus their new stuff released last year. 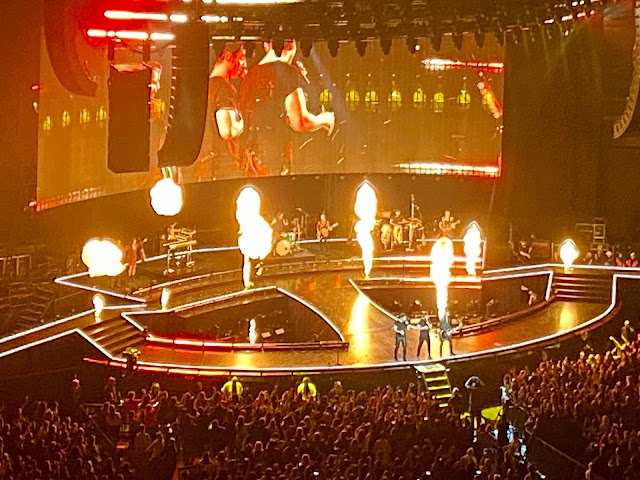 I think when the Jonas Brothers were around the first time, I was in my mid-teens, and I was just a touch too old for them. I knew who they were, as I grew up watching Disney Channel, and I knew their big singles, but I certainly wasn’t a diehard fan. I didn’t have any of their albums, nor did I even try to go see them live. So when they broke up, I wasn’t all that bothered about it. Yet when news of their reunion came last year, I found myself quite excited about it again. I hadn’t followed their solo careers in particular either, save again, for the well-known singles. But something about them getting back together stirred up feelings of nostalgia for the Disney days of my childhood, and how they were actually pretty endearing once you got past some of the cheesiness of a boyband of brothers. I got their new album ‘Happiness Begins’, to see what it was like, and was pleasantly surprised by how much I liked it. It’s definitely a more grown-up sound, as is appropriate for them now, and strikes a happy midpoint of their solo styles. 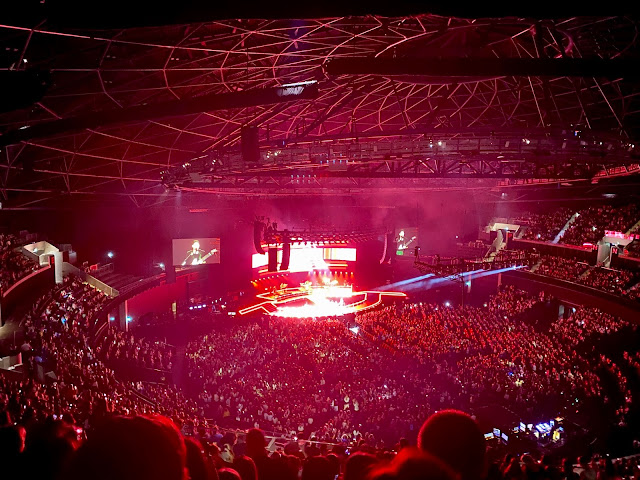 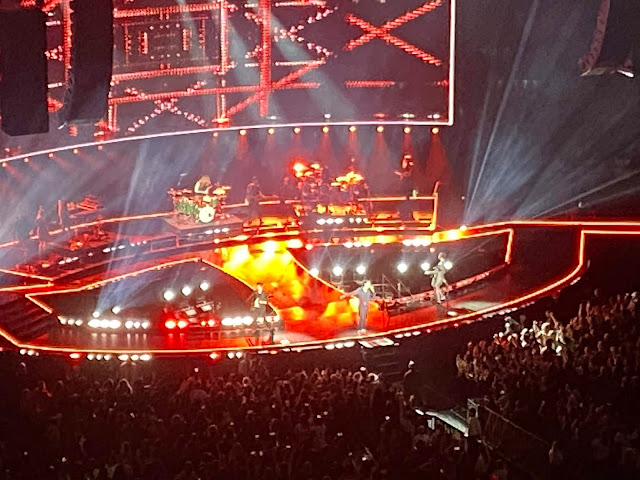 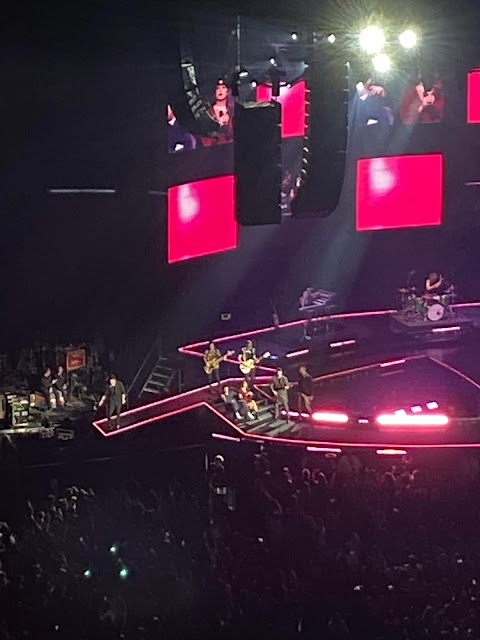 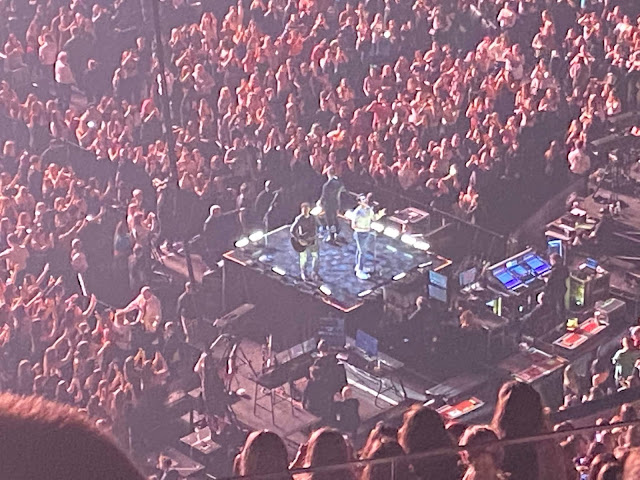 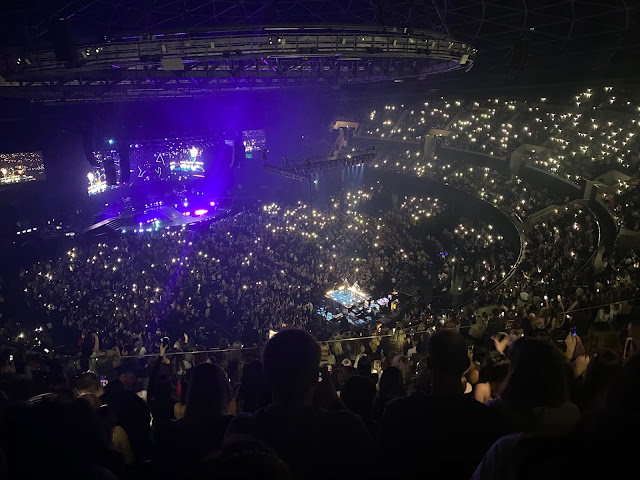 When I saw the tour announcement, I suggested it to my friend who I knew was the most likely to say yes – I was half-joking when I said it, as if she’d no, I wouldn’t have gone (I go solo to gigs regularly, but wouldn’t have in this case) and would have been fine with that. But when she agreed, I was like, amazing, we’re doing this! In the end, her whole family (who I’ve known since childhood) decided to come along too – I offered the same to mine, but they all declined. The show was in The Hydro, over in Glasgow, so we drove over together. I realised this was actually only the second show I’d seen in the Hydro (the other being You Me At Six & All Time Low co-headlining). I definitely forgot how big it is, and last time I was on the floor, whereas this time we were way up on the top levels (tickets were not cheap for this), so you could see just how big the whole space is. I didn’t mind being up top too much, as we still had a good view of the whole stage, and we were able to sit down during and between the support acts – normally I do prefer standing for gigs, but this was a long show, finishing at 11pm, and we didn’t know any of the support acts, so I was ok with it this time! The support acts were pretty good, but not hugely my style, so I doubt I’ll be looking them up again later.

The Jonas Brothers were obviously who we were there for, and they did not disappoint. They played a 1.5 hour set, with so many big hits to get through. It was quite clear that a lot of the crowd were much bigger fans than us, as they would recognise songs from the opening chords, whereas it usually took me until the chorus to get some of them! There were plenty that I had sort of forgotten about but whenever I did realise what it was, I was always like “oh, oh, I remember this, I know this!”. I did recognise a lot from the new album as well though, and they definitely struck a good balance between the two, appeasing their fans from back in the day, while also showing off their new stuff, and I think everyone could appreciate that mix. Plenty bands make ‘comebacks’ that are nowhere near as successful as their first time round, and end up only playing old songs, but the Jonas Brothers certainly seem like they can be just as successful this time around. They even played their song from ‘Camp Rock’, and a single each from Nick and Joe’s solo careers, so it was a very all-encompassing set. 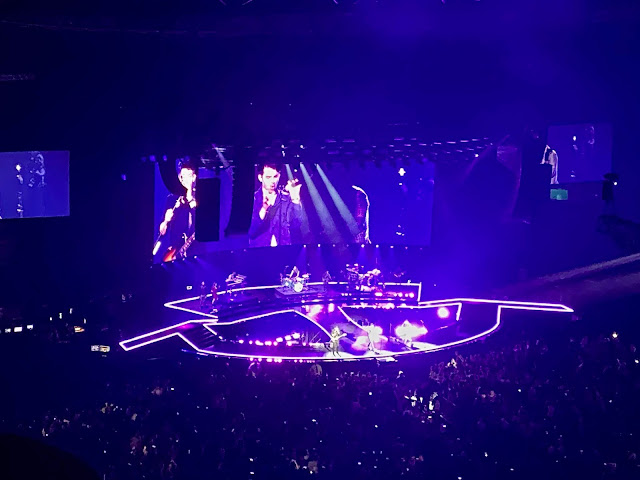 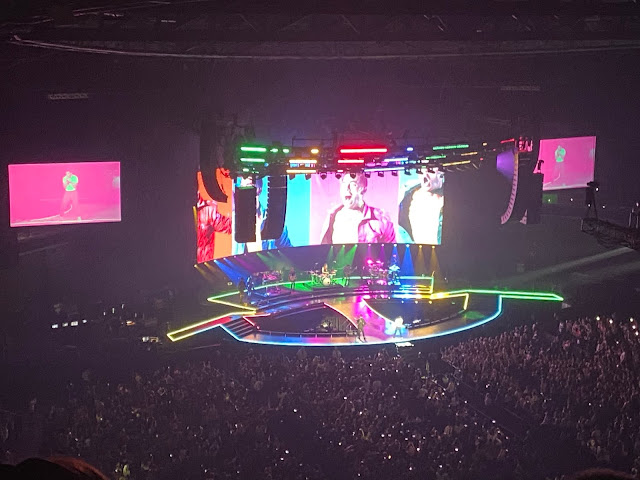 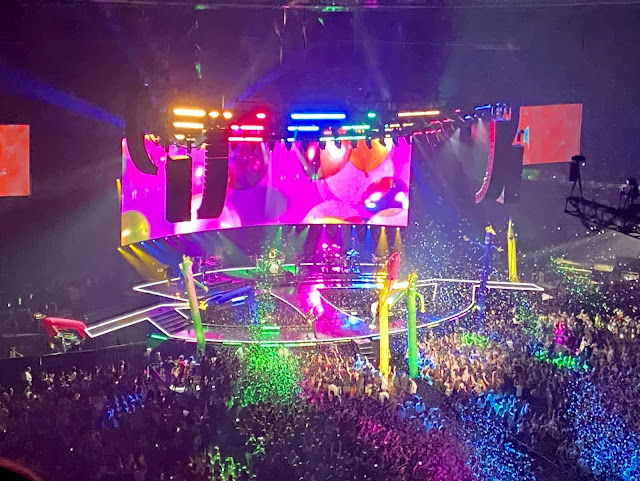 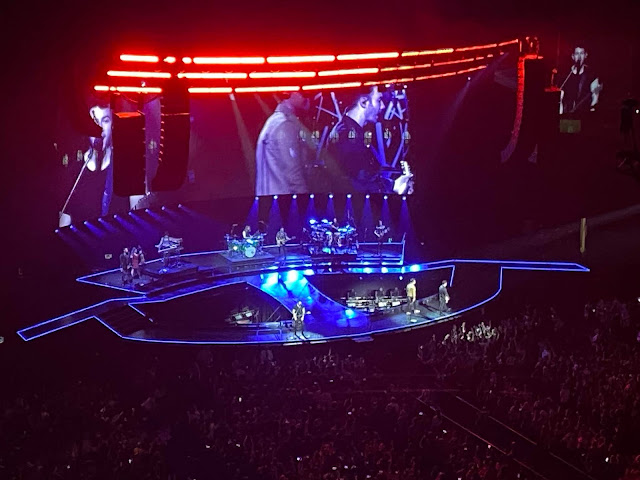 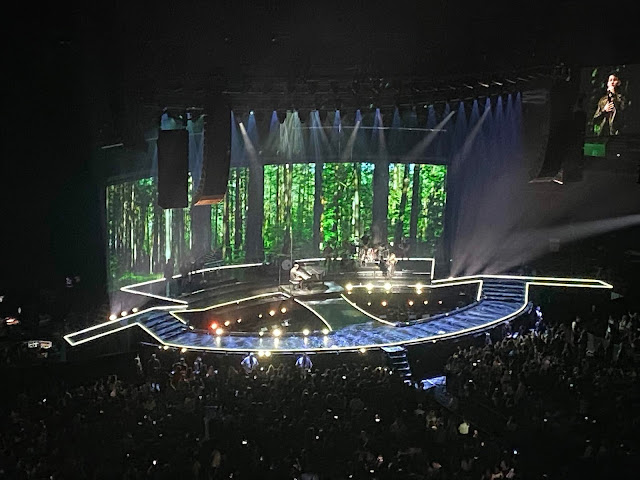 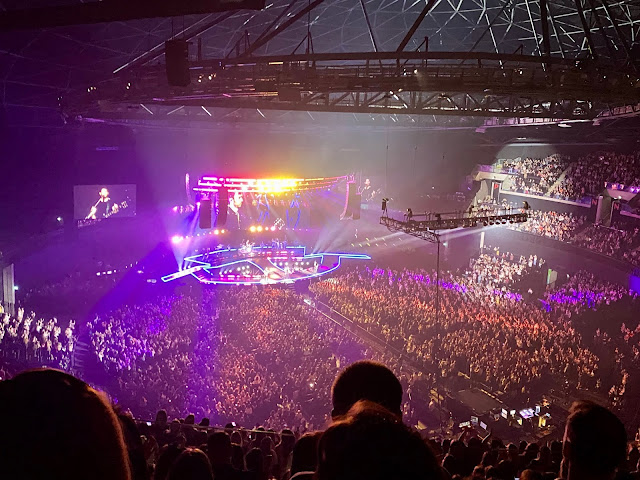 The staging of it all was great too – I don’t go to that many arena shows, so it’s fun to see what they come up with when I do! There was a stage that came down from the ceiling – twice, the second time carrying a grand piano – and trapdoors leading up from down below. We got confetti and fireworks and pyrotechnics. There were costume changes. They had videos on screen between songs, which told a sort of story of their younger selves at a carnival, who then end up meeting their older selves – I think everyone got most excited at the inclusion of Kevin’s children in that! There was a second stage in the middle of the crowd, and they would walk down a corridor kept clear between everyone to reach it. They had a full band and backing singers. One definite highlight was Joe getting the tambourine out again! But I think my favourite had to be the giant, inflatable, waving tube man things – do they have a name? – that popped up during ‘Cake by the Ocean’, they were highly entertaining! As well as my photos here, there’s also videos in my Instagram post and story highlights!

All in all, they put on a really great show, and it was so nice to see so many people excited and supportive of them getting back together, and I think they were really appreciative of that too. It was entertaining and very fun, and I’m so glad we decided to go in the end!