Well, it’s not every day you get to say you had tea with the Queen, is it? Alright, I didn’t actually have tea with the Queen, I didn’t meet her at all actually, but I did get to attend the Royal Garden Party at Holyrood Palace this year, which is pretty fancy, right? A few thousand people get invited to it every year, most of them nominated by the ‘Lord Lieutenant’ for their area, which is basically the Queen’s representative there. In our area, that would be one of my parents’ neighbours, so others friends of theirs have gone in previous years, and it was my parents, plus another couple in the valley, who got invited this year, and I got to go along with them. I’m not a massive fan of the Royals, but I don’t hate them either, so I mostly just wanted to go for the experience, as I likely won’t get such a chance again. 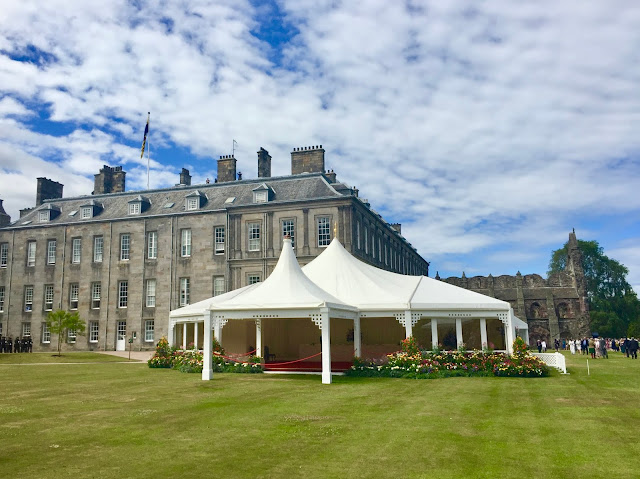 Obviously, when going to a royal event, you can’t wear just anything. The invitations come with a dress code, men having to wear suits or kilts, and women have to wear day dresses or suits, with some sort of hat or fascinator, and uniforms are acceptable too. I took this as a chance to reuse this outfit, from a wedding a few years ago, which I haven’t had an excuse to wear since. The day started waiting outside the palace gates, as you’re advised to arrive early, because of the amount of traffic going into that part of town. We had to bring our invitations and ID to gain entry from the police manning the gates. We got in pretty quickly, hence the reason I managed to take some of these photos of the grounds, before it filled up with people! The outer edge was the main tea tent, where we would get our refreshments, while the central tent was the one to be used by the Royal Family. There were also a couple of tents with bands inside, who took turns providing music, and the grass had tables and chairs scattered throughout.

Since we were in quite early, we quickly secured a table then headed to the tea tent to sample what was on offer. There were loads of options to choose from, so I limited myself to just a handful, otherwise I’d have been stuffed, but it did all look excellent. Of course, I had to make sure to take a cucumber sandwich, and I’m not normally a big tea drinker, but I thought I had to while at a tea party! We held on to the table for a while even after we’d finished eating, as it would have been swept up by someone else the second we even indicated we were about to move. That is what happened eventually, but we stayed for a while first, mainly people watching the crowds around us, particularly everyone’s outfit choices! There was also a pipe band playing in the centre of the gardens, all in their clan coloured kilts, and the Royal Company of Archers were marching round the grounds, as they serve as the Queen’s bodyguard when she’s in Scotland (we did spot additional security up on the palace roof too, monitoring everything, and of course, the gates were surrounded by police). 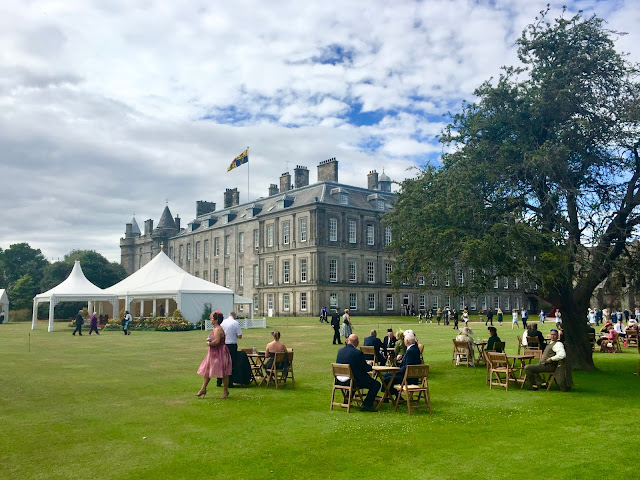 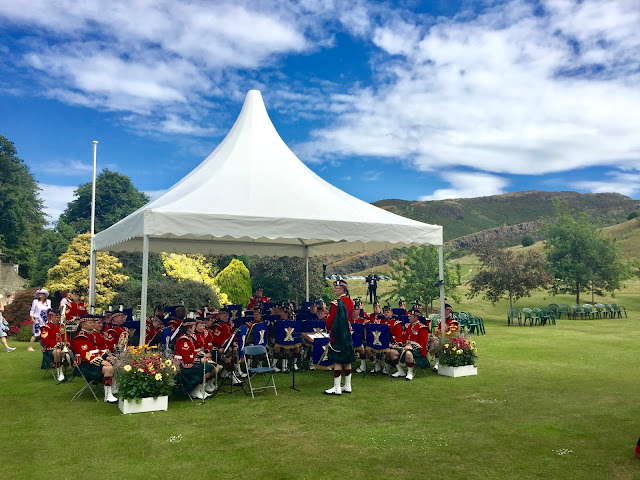 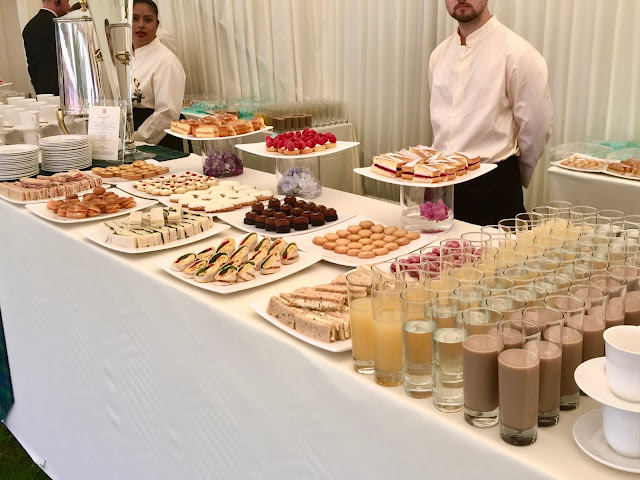 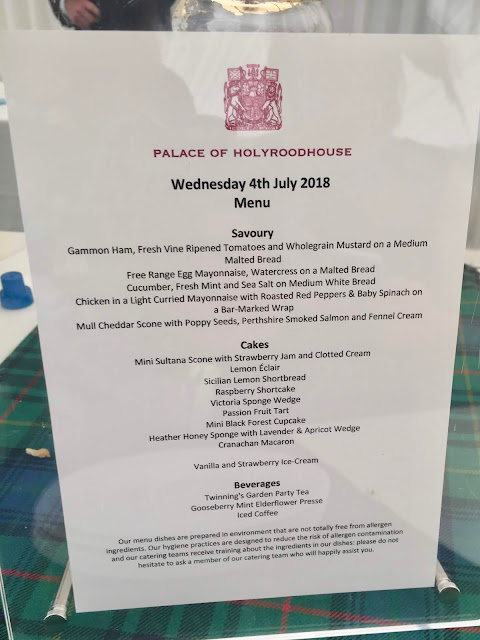 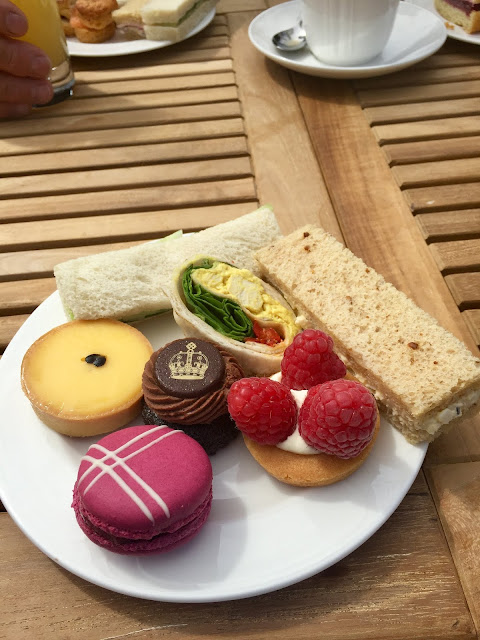 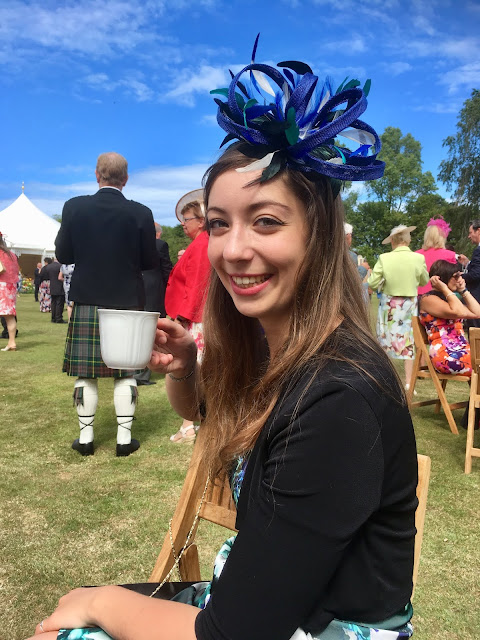 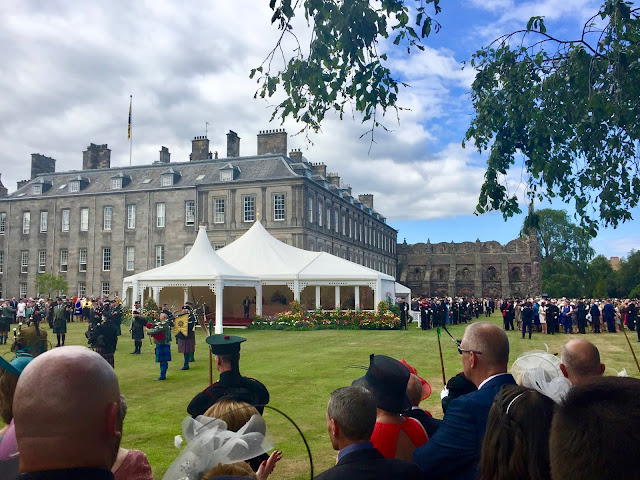 We moved eventually, and went to find a spot in the crowds to see the Queen arriving. She was accompanied by other family members, but none I recognised (I only know who the most prolific ones are). They all stand on the staircase leading out of the palace while the National Anthem plays, and then move through the crowd to talk to people. Obviously, there has to be order here, for safety, so the Archers form rows for them to move through, keeping the crowds in line. This means only the people at the front will get a chance to speak to any Royals, so you have to get in formation pretty early on if you want to try. We were much further back, so we only saw her from a distance, over other people’s heads, as she moved through the lines, and entered the Royal Tea Tent – her bright pink hat made it easier to spot her, I did like it!

We went for a wander round the gardens after that, while the Royals were having their tea. Holyrood Palace is open to visitors for most of the year, with an audio guide available to go around the palace, gardens, and Holyrood Abbey, but while the Queen is in residence (which is usually for about a week), only the gardens and abbey are accessible. I’ve done that whole tour before, so I’ve seen inside the palace, but usually the gardens are partially roped off, to keep visitors on the paths, whereas for the tea party, it’s all open. The Archers were also wandering amongst the crowds too, making conversation with people, so one stopped to talk to us, to see how we were enjoying our day. 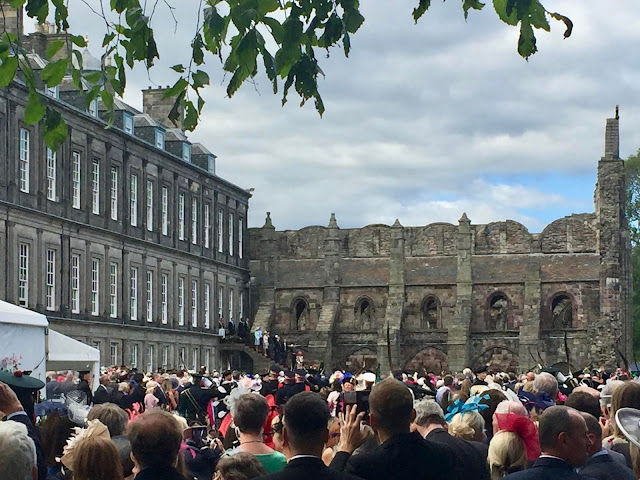 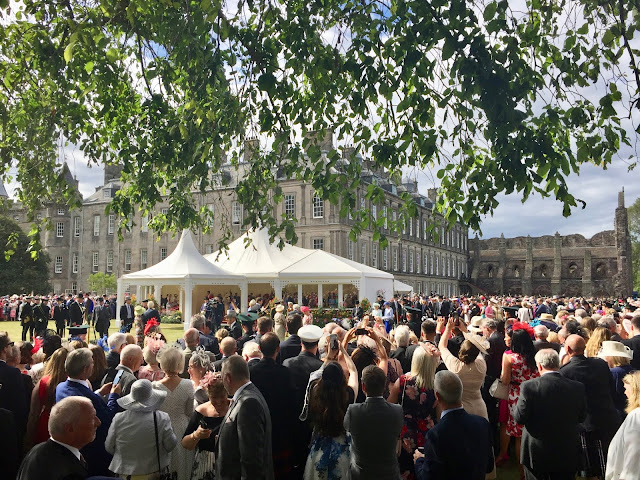 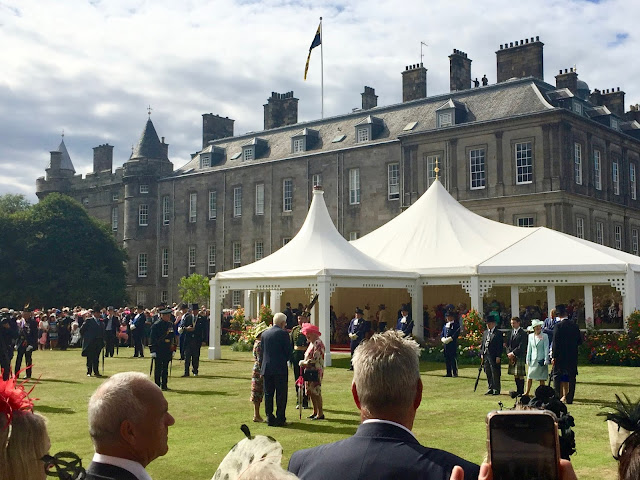 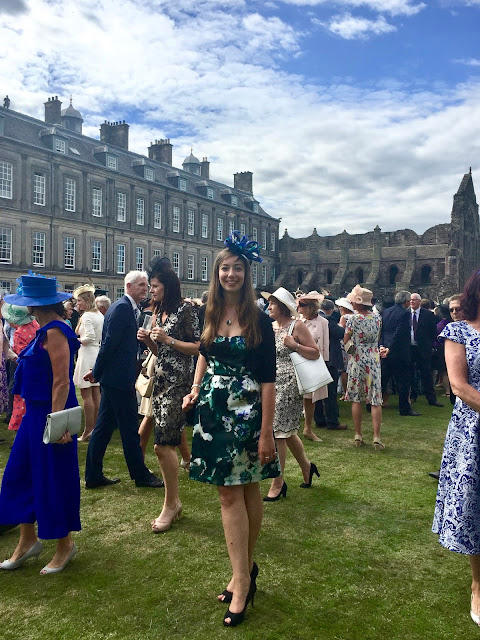 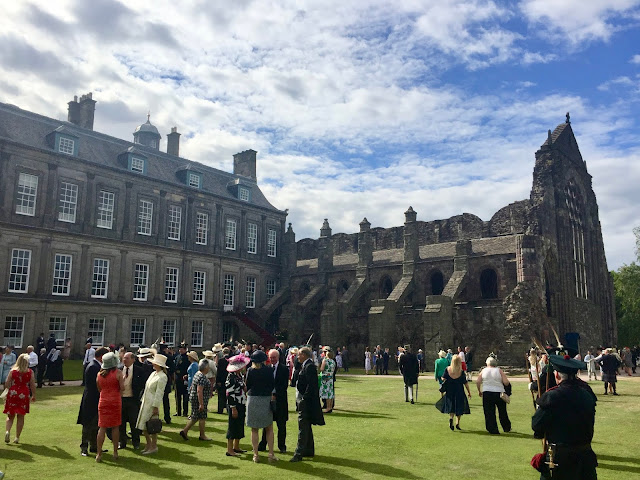 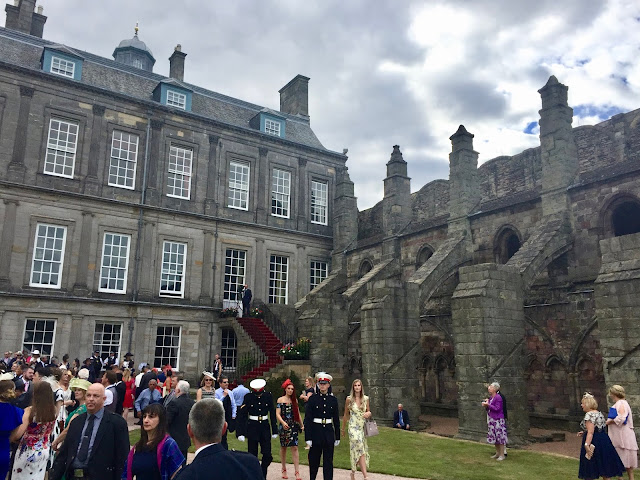 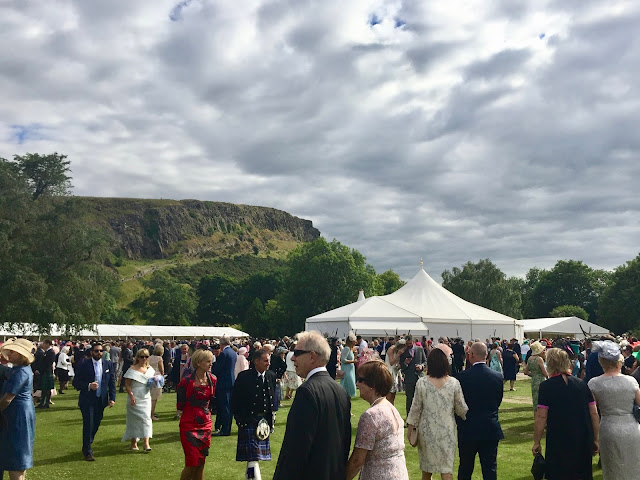 There was also ice cream on offer at this point, and as we were heading back over to find it, we noticed the Queen heading back into the palace (earlier than the schedule on our invitations had said). By this point we had pretty much seen and done everything there was, and it be finishing and closing in about half an hour anyways, so we decided to make our exit, also in hopes of avoiding the worst of the traffic. My parents and I also went out for dinner afterwards, since a few little cakes and sandwiches doesn’t fill you up!

All in all, it wasn’t always the most exciting thing, when we were just standing around waiting ages for the Queen to appear, and only saw her from a distance, so there were moments when it felt like a big fuss for nothing really. However, it was an experience that I likely won’t have again, and having afternoon tea and wandering the gardens, listening to all the music, was a pleasant way to spend a couple of hours.