Charlotte Travel
It’s beginning to look a lot like Christmas… and I’m so excited! Christmas has always been my favourite holiday, but in recent years I haven’t gotten quite as excited about the build-up to it as I used to. I assumed this was part of growing up, but it was more than a little sad to lose some of the magic. However, this year, my excitement levels are much higher! I think a large part of this is because I’m going home for Christmas, and I haven’t set foot on Scottish soil since January – this is the longest I’ve ever gone without being home. It’s also nice because, while I love travelling and see so much of Asia this year has been amazing, Christmas is something familiar, something from home, and of course I’ve been a little homesick, having been away for so long. Christmas isn’t generally as big a deal over in Asia as it is back home, since it’s largely a Western holiday, but they do know about it and celebrate to an extent; though it is disappointing to see it so utterly commercialised here (which it is back home too, but we at least know more about the background and meaning of it – my students here just know they get gifts!). The Christmas lights though are something I can get very excited about, as they’re just so pretty, and Nampo has a huge display in its main streets, which I went to check out last week. 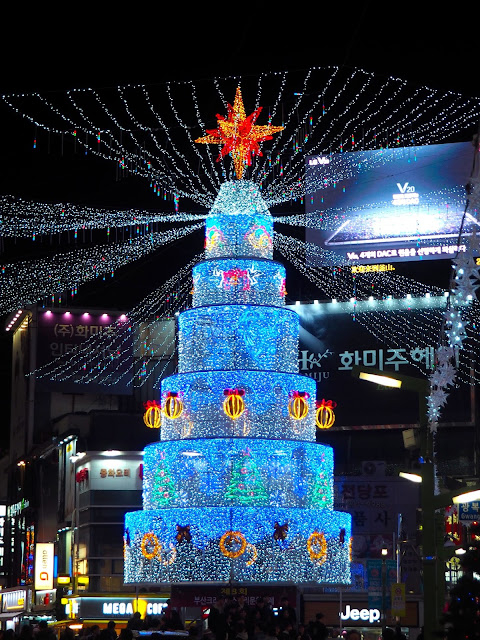 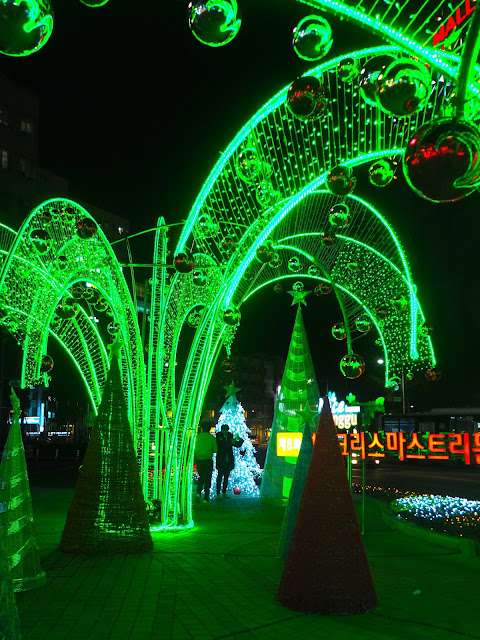 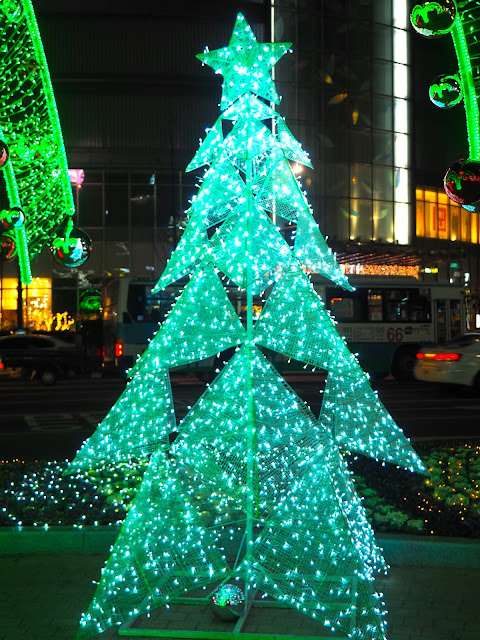 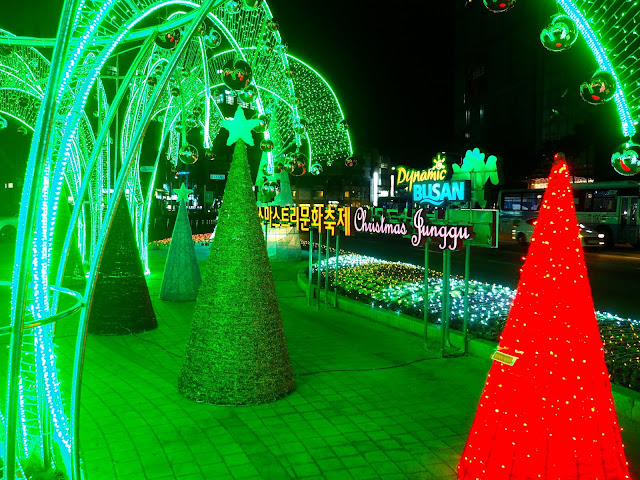 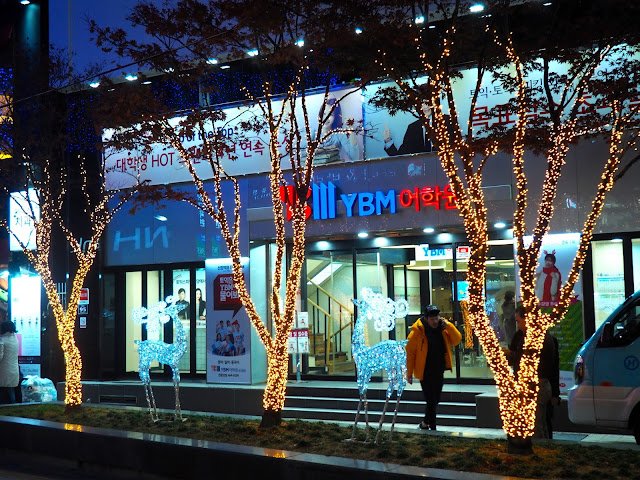 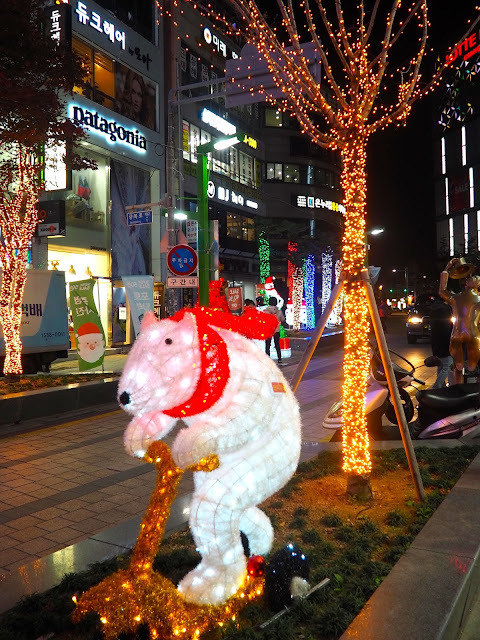 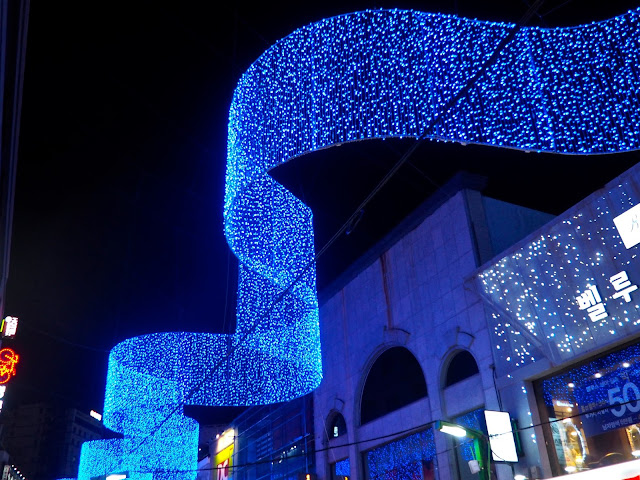 I walked past this street every day, going to and from work, but I only actually walk along it every now and then. I had thought about going to see the lights being turned on the first night, but it was cold and wet, and the website was all in Korean so I couldn’t really understand about all the ceremonies and performances happening before the turn on, so I didn’t know what time it would be at. Plus, Saturday nights on that street are hellishly busy on a normal week. It’s still busy after work, but more manageable. The entrance to Gwangbok-ro has this sort of grotto of trees, as pictured first, which is naturally full of people posing for photos. Only the larger green displays were lit while we were there, though I have seen the other trees lit at different times… the green was festive, if a bit garish, and our skin looks ghostly in the one selfie we took there! The rest of the street is lined with various festive displays, from candy canes to snowmen to reindeer to polar bears riding scooters (naturally…), and the trees there anyway are strung with lights. The whole street is lit overhead by this weaving pattern of lights, as if leading you to the centrepiece of the whole display, the gigantic Christmas tree at the intersection. I’d been watching it get put together for weeks, so the size wasn’t surprising (though it really is huge), but it looks much more impressive finally lit up! Though as my friend pointed out, it does also resemble a wedding cake a bit. 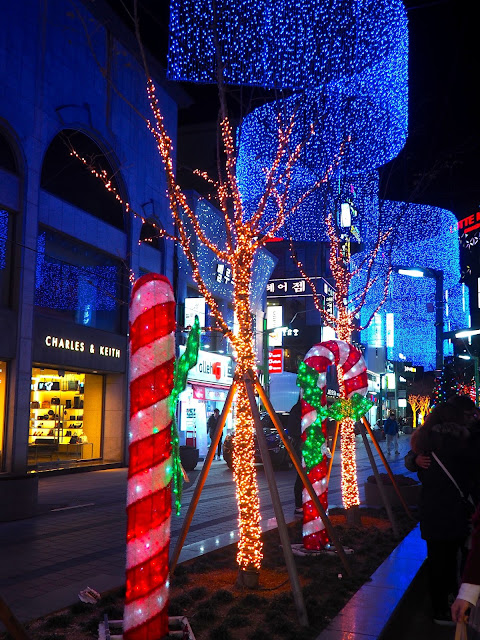 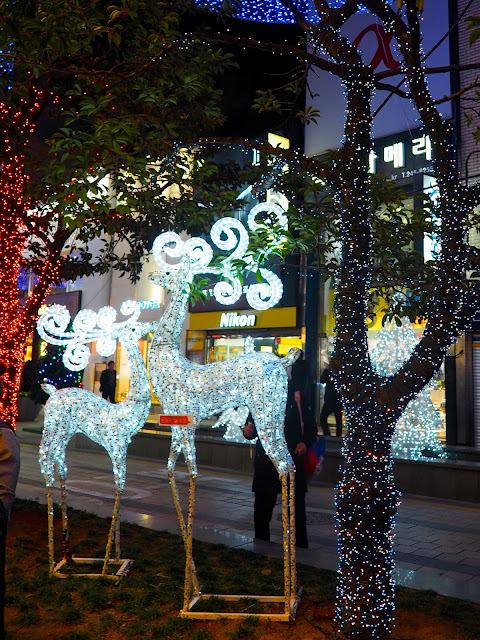 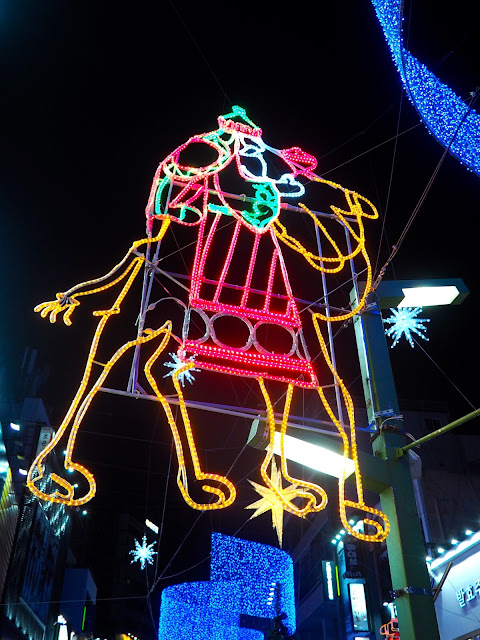 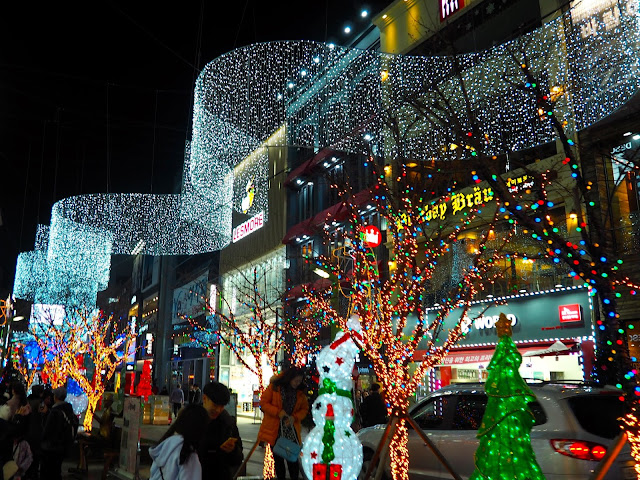 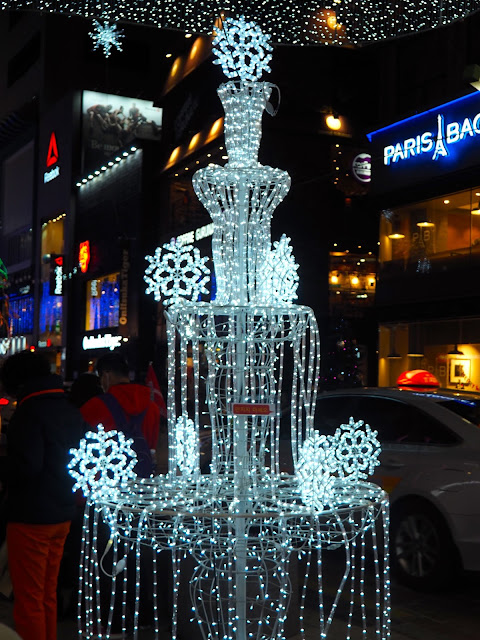 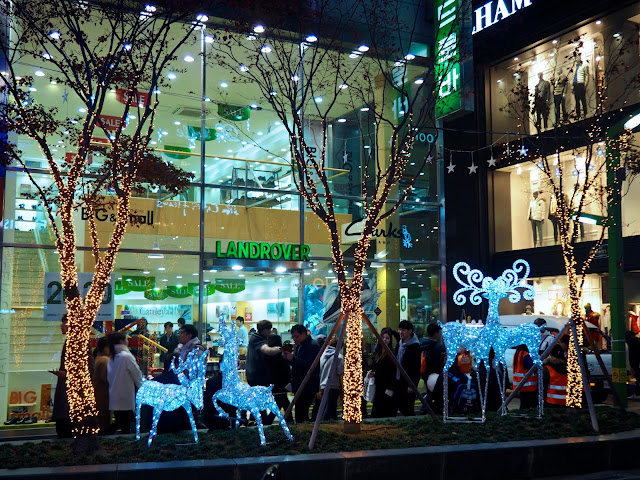 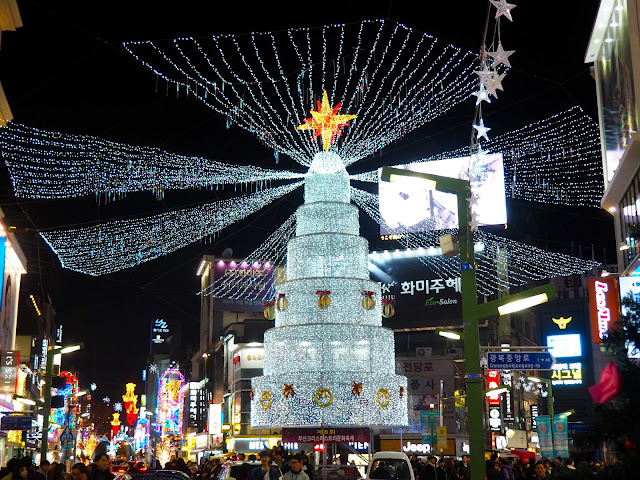 From the intersection, there are two more streets of lights, one which continues similar to the first, with more deer and trees and the like. Some of the shops on this street have put up their own lights to join in, my favourite of which was the gift design pictured, as we thought it was quite a clever idea. The lights come to an end quite suddenly at the next intersection, when the other streets suddenly look much darker in comparison! The other street leading away from the tree is a wider road (unlike Gwangbok-ro, which is one-way and doesn’t have very much traffic), so instead it has these large arches along it, which meet above the cars, and mostly seemed to be decorated with musical instruments and notation. We didn’t walk all the way along this street, as it was out of our way and looked like it was the same all the way along, but it was quite cool to view from one end, with the arches getting smaller into the distance. I enjoyed seeing all the lights, as it makes everything feel more festive, but I have to say, I still don’t generally like walking around Nampo when it’s busy in the evenings like that, but oh well! I’ve seen Christmas things in a few shops, but otherwise Nampo is the only part of the city I’ve seen so far that feels Christmassy. There’s certainly not going to be anything to rival Edinburgh’s Winter Wonderland, but I’ll take what I can get! 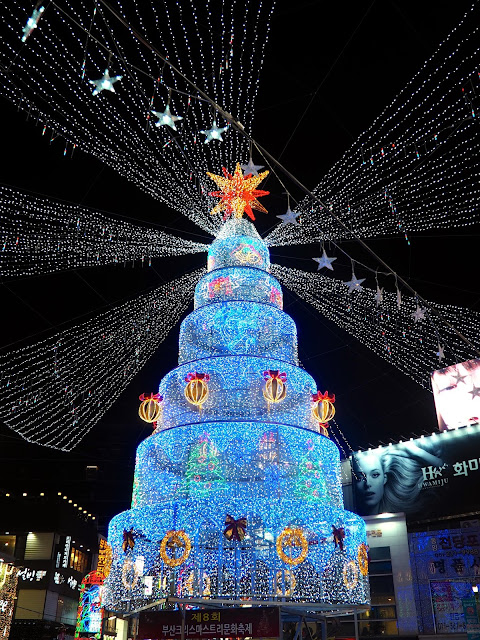 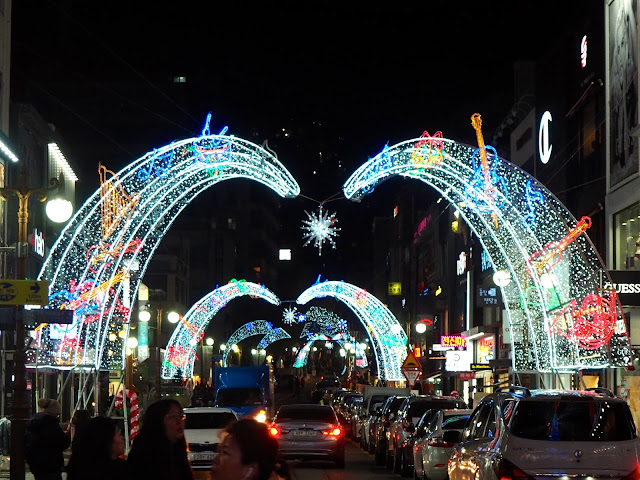 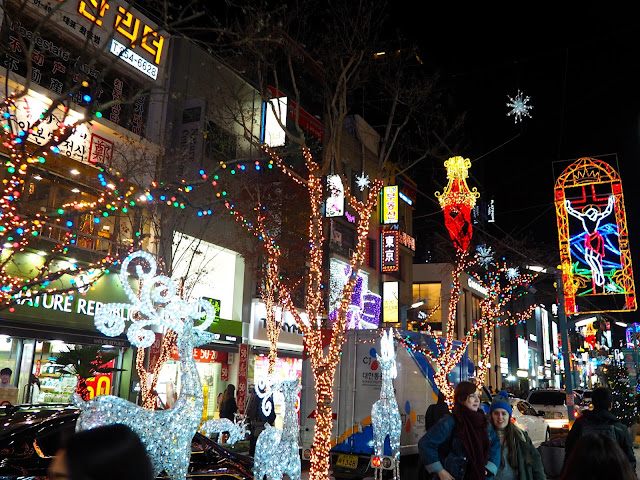 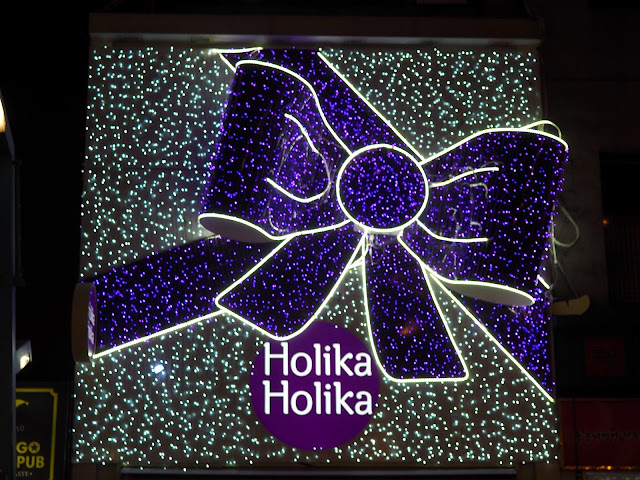 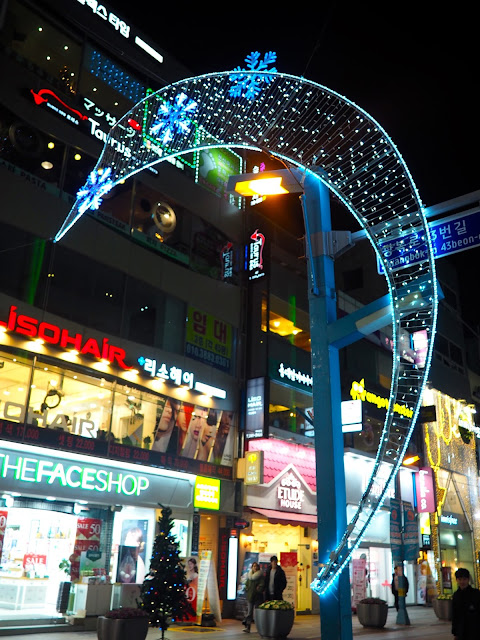 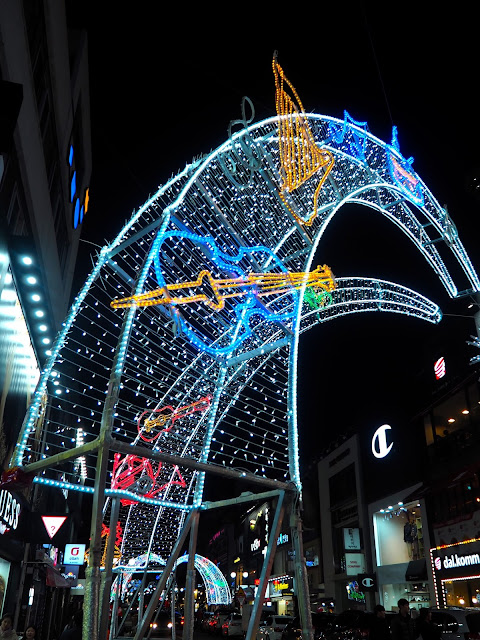 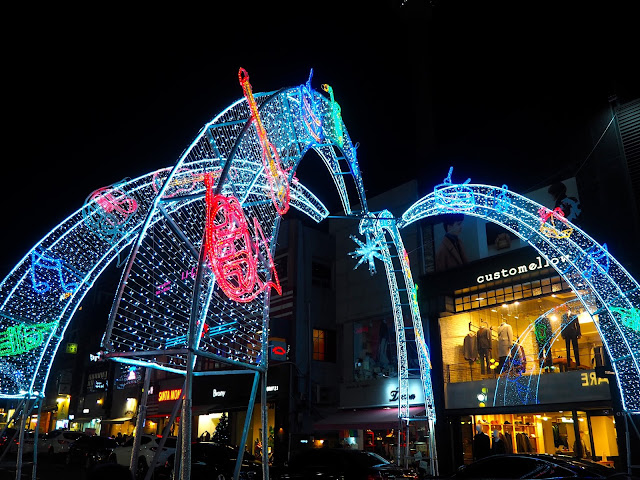 I’ve been getting in the Christmas spirit for the last few weeks myself too; I bought a few cheap decorations to put up in my flat, to make it feel more festive. Tinsel isn’t normally my thing at home, but it’s cheap and cheerful, especially when it’ll probably get given away or thrown out at the end of the year, and I’ve got some twinkly lights and little ornaments (the latter I’ll probably keep, as I did with the ones I got in Hong Kong). What I wasn’t planning on getting was a tree, but they had 1m tall artificial trees for dirt cheap, so I couldn’t resist! It’s been perched in a corner of my room now since late November – far earlier than I ever usually put up decorations, but I couldn’t help myself this year! I put together a Christmas playlist on YouTube too (which is here, for those interested), which I’ve been playing around the flat when I’m in the mood. The school is getting into the spirit too, which is both good and bad – it’s good considering I’m felling festive anyway, and the Christmas music they’re playing is a million times better than the kiddy songs we normally have to hear. But, as I mentioned, it’s disappointing that these kids only know it commercially (and it’s too difficult to teach them more about it when they don’t understand half my English). Plus, it has led to a lot more work than usual, making all the decorations, which does end up putting you off a bit… But my classrooms are pretty much done, so I can start to feel cheerier again!

More than anything though, I’m looking forward to going home. I’d be excited about that anyway, but it’s even better to be going home for Christmas (and my Granny’s 90th birthday on Christmas Eve!), when I get to see more family than at other times of year, and everything feels warm and festive and happy! And Christmas dinner. I’m super excited for Christmas dinner! Sixteen days until I’m home, eighteen until the 25th!

If you’re interested in visiting the Festival, and are staying in Seoul, you may like to look at the Busan Christmas Tree Festival: Overnight Shuttle Bus Package from Trazy Crew. I did not do this tour myself, but it offers transport and accommodation from Seoul for a night in Busan, and I am an affiliate for Trazy.