So Halloween this year was a bit of a bummer, especially after last year’s being so much fun! A big part of the reason was that I got sick over the weekend, so couldn’t make it out on Saturday night, which was when most people were going out to celebrate. However, it sounds like it was a standard Saturday of bar hopping, just in costume, so I’m not sure I missed out on all that much. I think I enjoyed last year more than most Halloweens because we were doing something a little different (Rocky Horror and Bierfest). I have mixed feelings about Halloween anyway, as I find its origins fascinating – from the Gaelic festival of Samhain, and the idea that it’s a time when the boundary between this world and the “other” world is thinnest, allowing spirits to visit us. I also love the spookiness, and all the lore and legends about witches and ghosts and demons and such, and when costumes are done well, they can be breathtaking. I like the mystical side of it more than the scary, horror stuff, and I’m less interested in what modern, commercialised Halloween has become – cheap costumes that are nothing to do with the supernatural, excessive candy consumption, and gory, horror films. So although a night out drinking in costume would’ve been fun, I guess it’s nothing I haven’t done before. 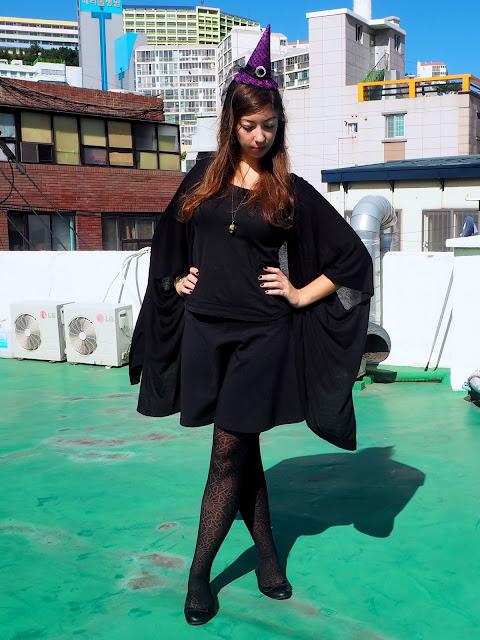 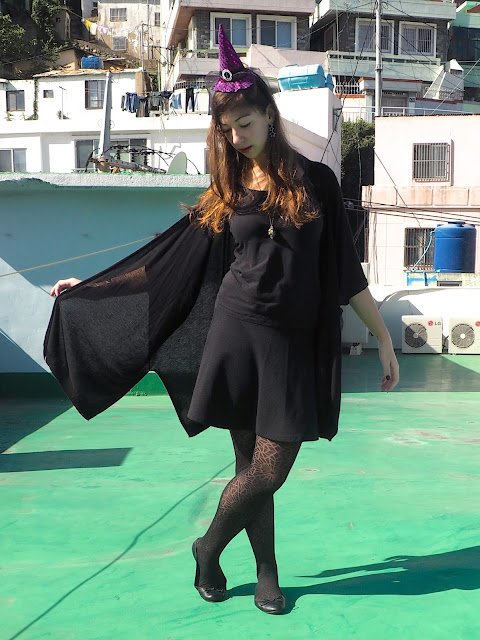 What I did do though, was spend a day at work doing the Halloween party for the students. Parts of it were fun, parts were irritating, and the whole thing was exhausting (I’m definitely blaming it for how sick I felt the next day). We worked from 10am to 5.30pm with very little in the way of breaks, and then had to clean up after, and I had one class still to teach at 6.20pm. We had a staff meal afterwards too, which was a nice gesture, but I was so tired by that point that I wasn’t really in the mood for it, but I went anyway. The outfit photographed here was what I wore that day. We weren’t asked to get full-blown costumes, but we were encouraged to wear something, and there was a selection of odds and ends in the office to choose from, but I put all this together myself, not fancying what they had on offer. The clothes are all items I own anyway, and it’s pretty easy to dress all in black. I thought the cardigan was a good touch, since it’s so wide and floaty that it’s a little like a cape. I’ve had the tights for ages (since I was in France actually!), and I certainly don’t exclusively wear them around Halloween, but they were definitely appropriate. The jewellery is pieces I had anyway too, and I thought the skull was appropriately spooky, and the stars worked with my mystical, witchy vibes. The headband was the only thing I bought, and it was dirt cheap. I didn’t want a big hat, as it would have been too irritating to wear all day, but the headband just helped clarify to the kids that I was definitely a witch (or at least channelling some witchy vibes)! 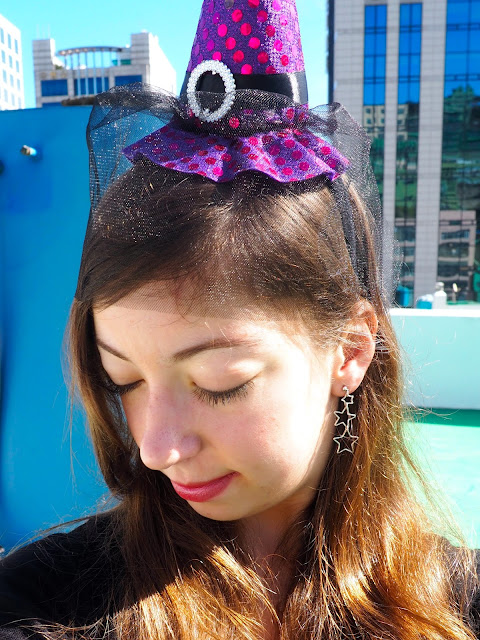 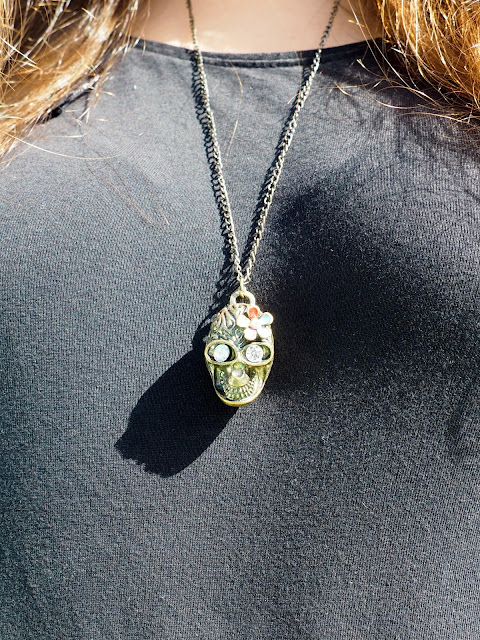 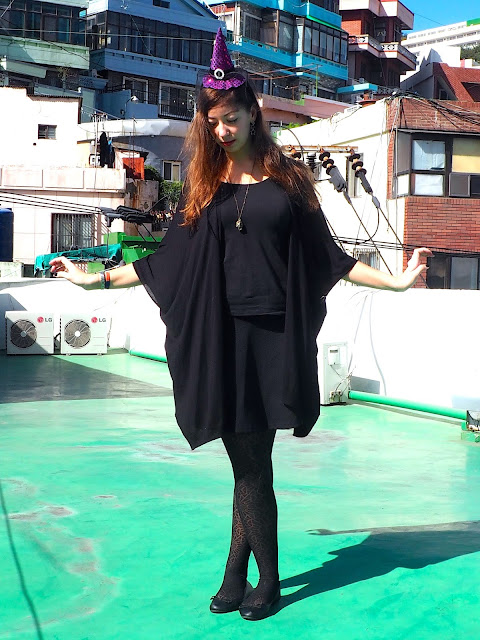 The day started off quite fun, with a costume parade by all the students, which ranged from spooky witches, vampires and cats, to pop culture superheroes and princesses, to some downright odd combinations – a penguin with halo? The teachers wearing costume had to take part too, which made me super glad I’d put my own outfit together, when I witnessed another English teacher have a pink tiara and veil forced upon her head… After that we did pumpkin carving, which I thought would be fun for the kids to learn about, but it’s limiting what you can do with kids that age. We carved the pumpkins beforehand, and just popped the eyes and mouth back out in front of them all. Then I had to help very student scoop out a spoonful of seeds, while photos were taken, which was fine at first, but since I’m a lot taller than the kids, my back was aching after hunching over them and the pumpkin for a good 20 minutes. Our lunch break was given over to setting up the activity rooms, which were for both the kindergarteners and the elementary students coming later (we got brief breaks during the session changes, as students left and arrived). We had a snack room, a flea market, face painting, a haunted house, and the games room, each run by a Korean and an English teacher. 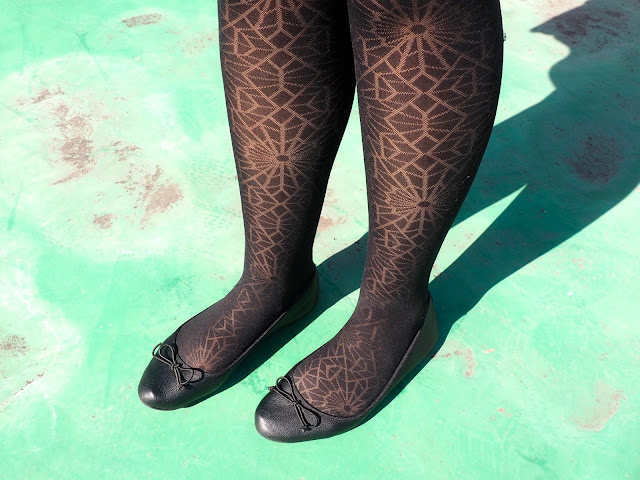 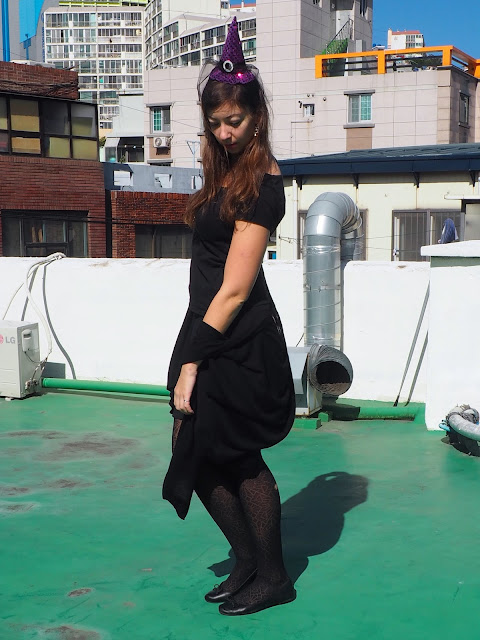 I was in the games room, and luckily the Korean teacher had prepared a lot of it well in advance, and we had back up games that we never actually needed to use! Our two main ones (for any other teachers who may want ideas one day!) were Monster Bowling, where we stuck monster faces to cardboard bricks, which were worth different points, and students threw bean bags to try to knock them over, and Eyeball Race, where we coloured polystyrene balls to look like eyes and students had to pass them along their line wth spoons, without touching the balls with their hands. Both very simple concepts, but they were easy and fun for all the ages that we had that day. It wasn’t difficult work, but I was on my feet all day, re-setting the games mostly, and it certainly got tedious and tiring after a while. We did that for hours, with up to about sixteen kids in the room at a time. Then, as mentioned, I had to help clean up, teach a class, and go for dinner. No wonder I woke up sick the next day and stayed in bed! I was also so Halloween-ed out after the party, that I wasn’t too bothered about doing anything else to celebrate, and I’ve already explained how I feel about Halloween in general anyway. So not my favourite year for it, all in all, but I was quite pleased with how this outfit turned out, and since I didn’t go out on the Saturday night, I now have a spare non-spooky costume, that I had been planning on wearing, stashed away for whenever I next need to dress up for something! 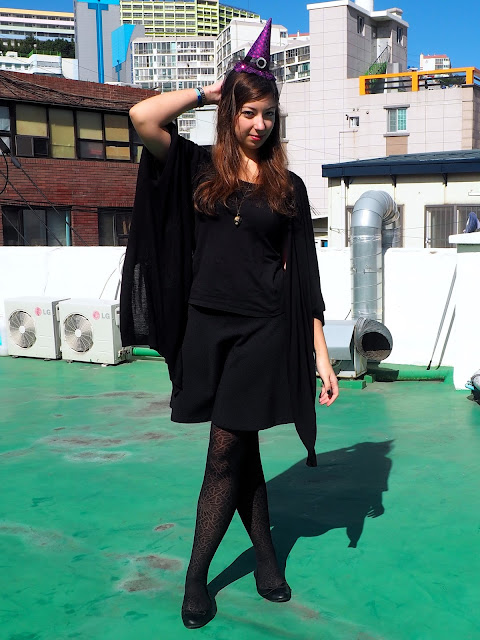