One of the great parts about living in a foreign country for an extended period of time, is that you are more likely to get to experience local events and festivals, which may not always coincide with shorter holidays to these countries. One such festival in Korea is happening now, and I managed to visit it last weekend. Just over an hour on the bus from Busan is the town of Jinju, which is currently hosting its annual Lantern Festival (Namgang Yudeung). Saturday was the opening night, when the lanterns would be illuminated for the first time, and there were fireworks and some special ceremonies to go alongside it. Having been to Mid Autumn celebrations last year in Hong Kong, which is also known as their lantern festival (though the origins and reasons behind each are entirely different), I was curious how this one would compare. Plus, the pictures I’d seen online looked very pretty! 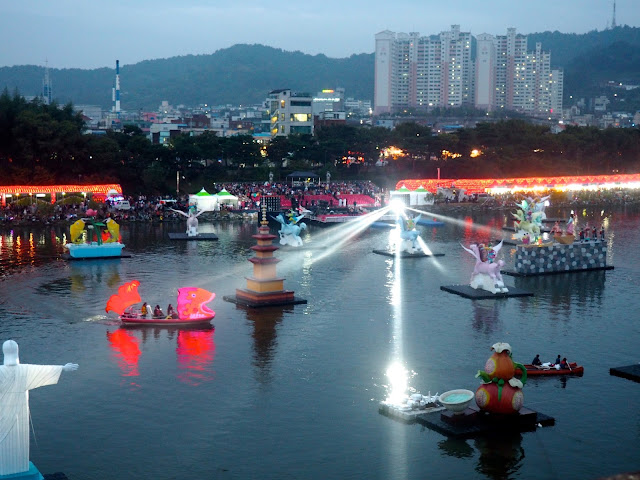 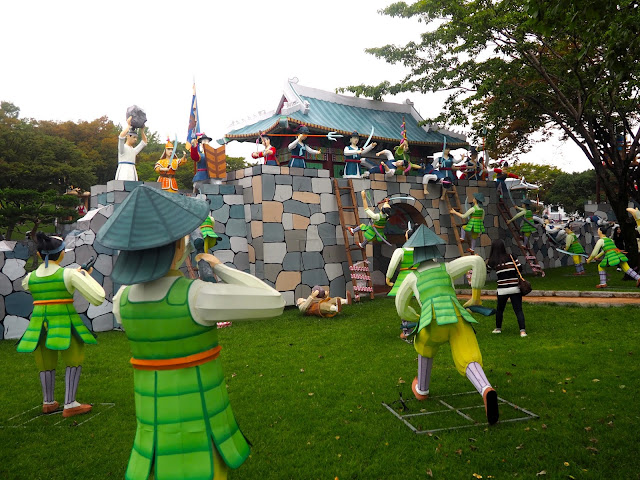 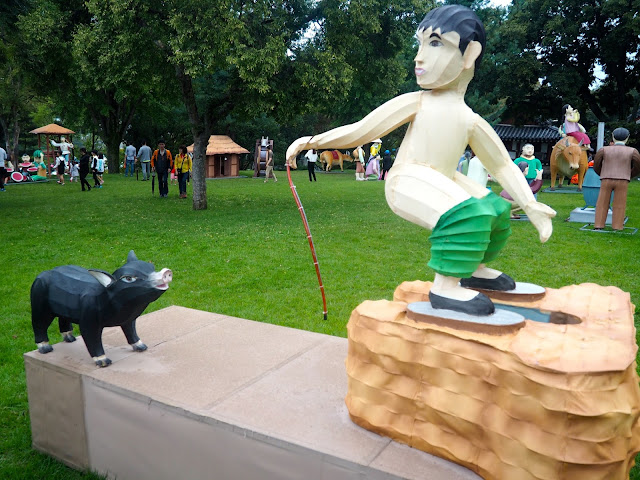 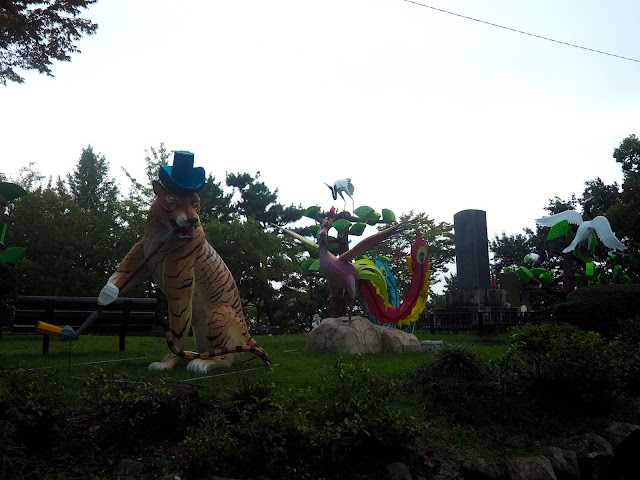 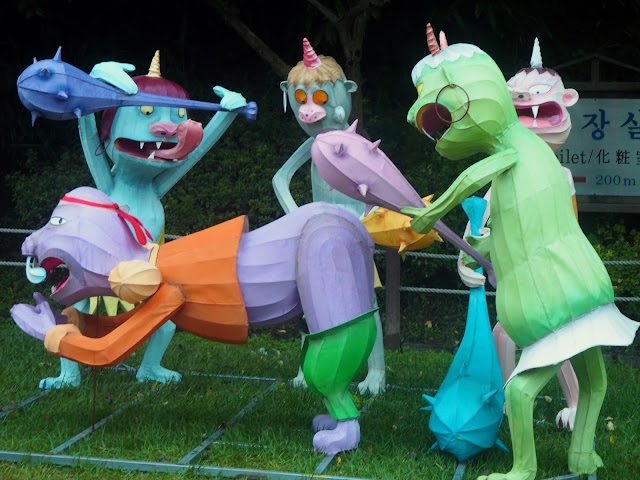 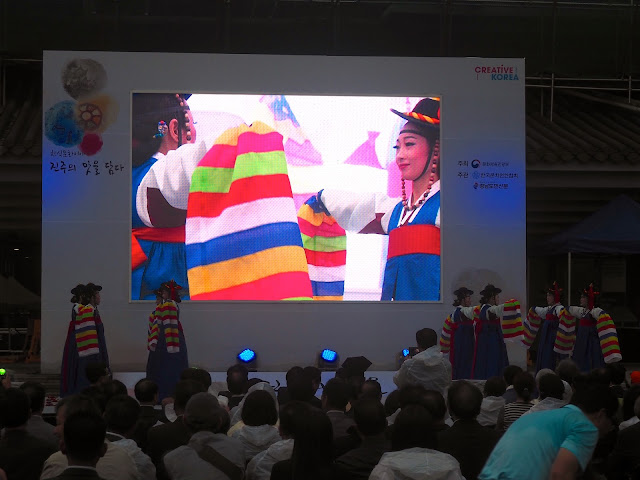 I headed over to Jinju around mid-afternoon, in case there were any hold ups getting there – I was anticipating it to be fairly busy, since it was the opening night, and on a public holiday weekend (Monday was National Foundation Day). However, we got on the next bus that came through the Sasang bus terminal, and made it there in plenty of time. It was easy to see where the festival was happening, as all the lanterns are either on or next to the river, though it was too early for them to be lit up yet, since it was still light out. Apparently, the festival used to be free, but now you have to pay entrance to the area, which is slightly frustrating, but it’s not too expensive. When we entered the grounds, there were a lot of people going in and out the fortress to our right, which looked to be a year-round tourist attraction, but entrance to it was included with the festival ticket. Since it wasn’t dark yet, we figured this would pass some time while waiting; what we didn’t realise, was that the fortress is crammed with even more lanterns, and is part of the festival! The lanterns are definitely more impressive lit up than by daylight, but still pretty interesting either way. We wandered around the fortress, passing hundreds of them. There were large re-enactments of battle scenes, archers lining the walls, and various traditional aspects of Korean life, like games and musical instruments, as well as some more unusual displays. Animals dressed as people, insects mating, a field of snowmen, a boy urinating while a pig stood behind him, and some troll-like creatures spanking each other with a spiked club… I suddenly started to doubt how family friendly this festival was! There were so many paths winding through the fortress that we got a little bit lost at times! And as it started to get dim, the lanterns would suddenly start to light up, different sections at different times. 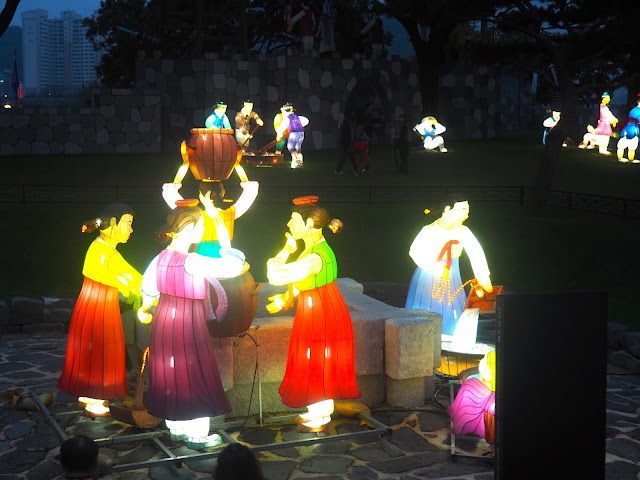 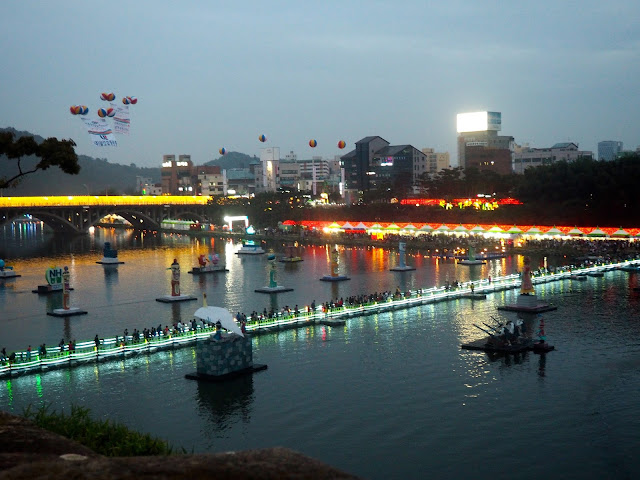 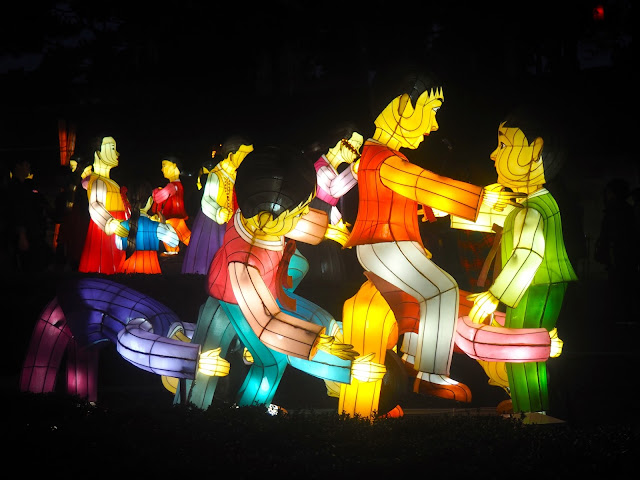 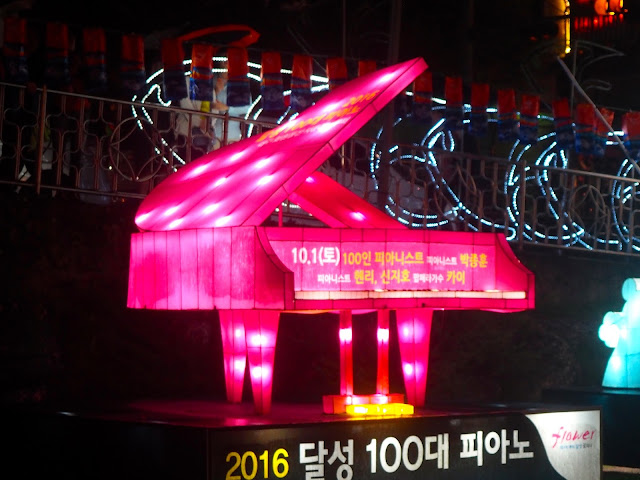 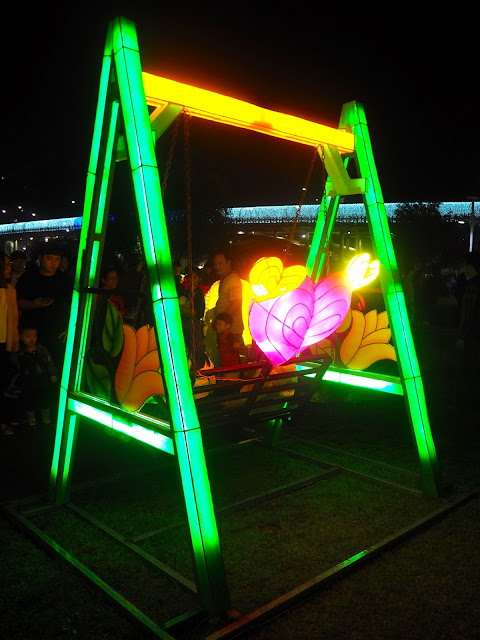 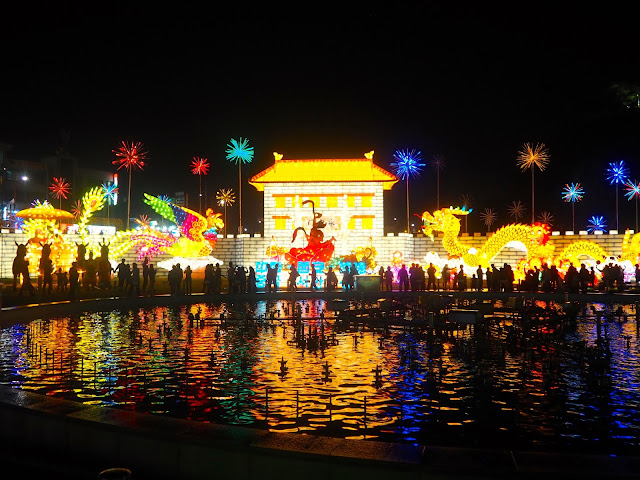 It still wasn’t completely dark yet though, so we stopped off for some food. Since we didn’t think we could get back into the area, as our tickets were ripped on entering, we had to explore the options inside. Fortunately, there were many street food tents to choose from. These can be a challenge sometimes, due to language barriers and menus written only in Korean, but thankfully we found a stall where one guy had pretty good English, and managed to get something! There were even more food options down by the river, so later on we snacked on some waffles and cream too – I could smell them before I could see them! After eating we went down to the riverside, and discovered that the lanterns along the banks were lit, but the ones floating out in the water were still in darkness. The main bridges crossing the river are outside the ticketed area, but there are temporary pedestrian bridges set up inside, also brightly lit. These were the wobbliest things ever to walk across though, and it sort of made me feel like I was drunk! Its even harder to keep your balance with dozens of others crossing at the same time too, and nearly every picture I tried to take came out blurry, because of the movement of the bridge and not wanting to hold up other people – oh well! On the other bank, people were gathering by the side of the river, and it was clear that this was in anticipation of something, we just didn’t know what. We decided to stick around to see, and were rewarded as it struck 8pm, when the river burst to life as the lanterns turned on, accompanied by the fireworks display. We had a good spot, being almost in the centre of the display, as they flared up from behind the river. One of the more unique fireworks was a pair of birds that began to swoop through the sky, before their tails suddenly erupted into sparks. 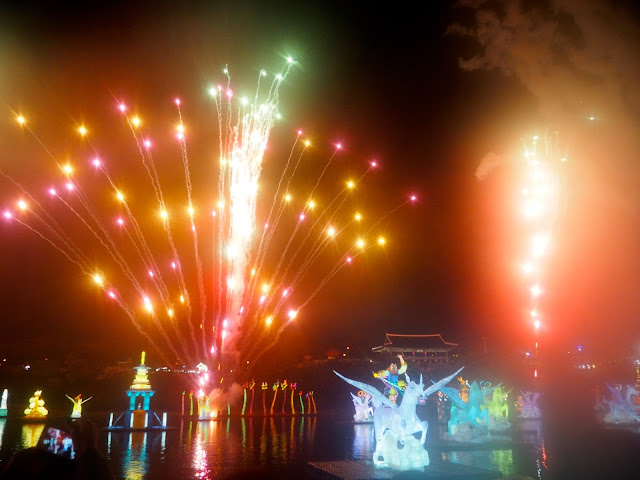 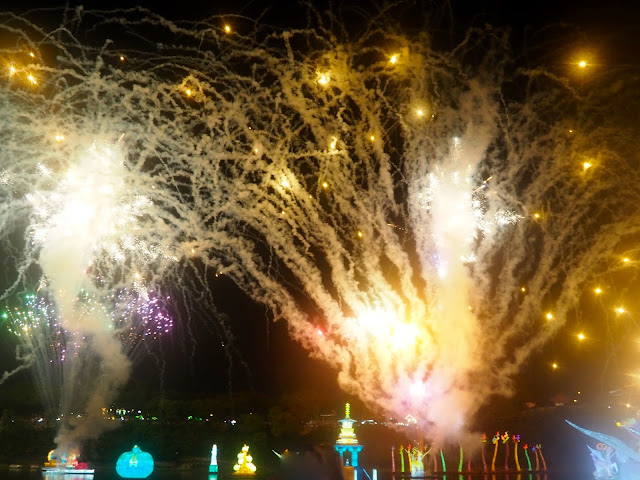 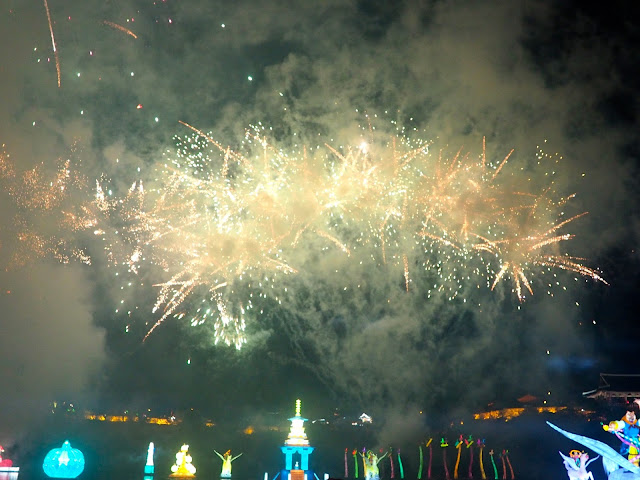 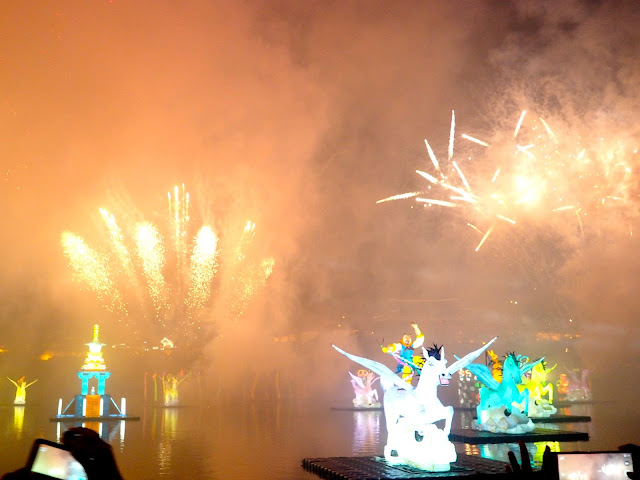 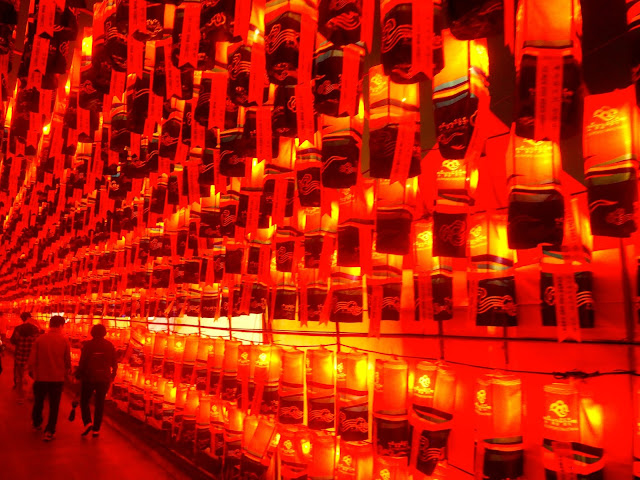 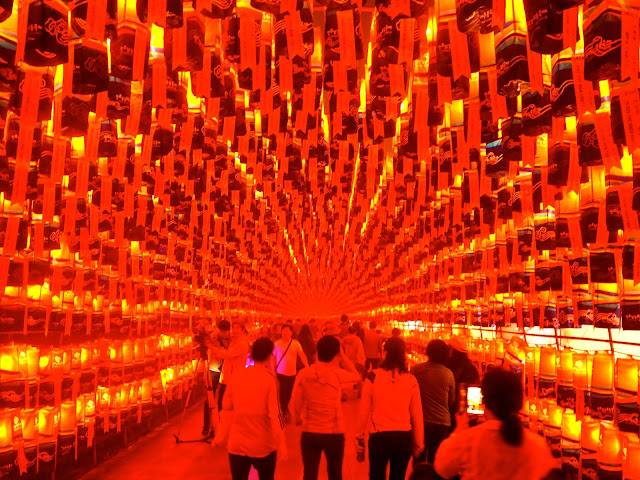 After the display finished, we could properly appreciate the lanterns on the river itself. First though, we took a quick detour through the lantern tunnel, which is so long that you can’t see the end of it, and made from hundreds of red lanterns, so it’s pretty impressive to walk through. We crossed the river again at the other end, using another wobbly water bridge, then walked back down the other banking, which gave us a good sweep off the whole area. The river played host to lanterns designed like famous paintings, fairytale characters, and the World traditional exhibition, featuring famous sights and representations of different countries. There’s also an illuminated playground at the top of the river, with swings and slides lit up, and a huge, colourful fountain feature. Walking along the bank, some of the lanterns out in the centre of the water are harder to see from a distance, and we really should have gone up and down both sides to see them all properly, but we were still able to see a lot. And while each lantern is impressive on its own, seeing them all lit up together like that is even more stunning. We took another loop around the fortress again, since the path naturally took us back inside, via a different entrance to earlier, which is good, as now everything was lit up, and surrounded by darkness. The view looking down over the river and bridges was very impressive, and as we roamed the fortress, we were still able to stumble upon different paths and lanterns we hadn’t seen before. Some lanterns were even rigged up to move, like the man popping out of a pot and going back in again. I was a big fan of the flowers ‘growing’ out the ground, and the spherical lanterns hanging above them, which was all very pretty (and less weird than some of the others!). 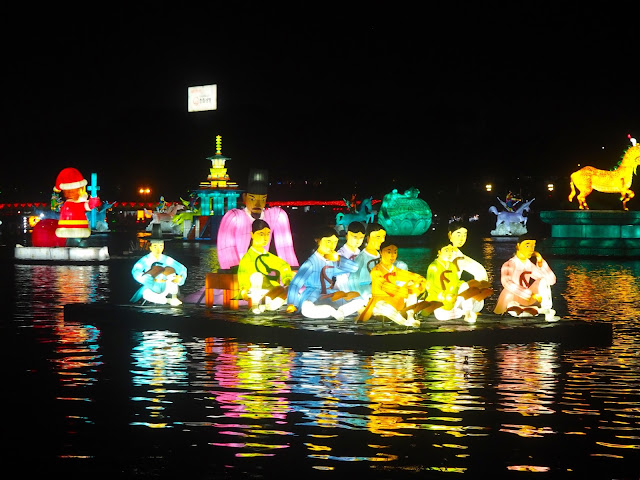 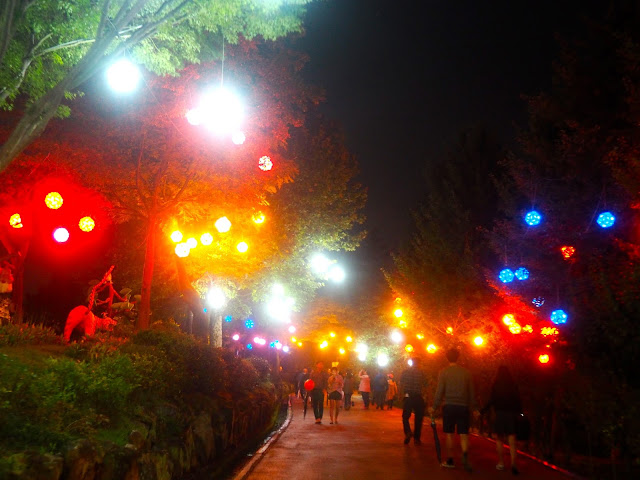 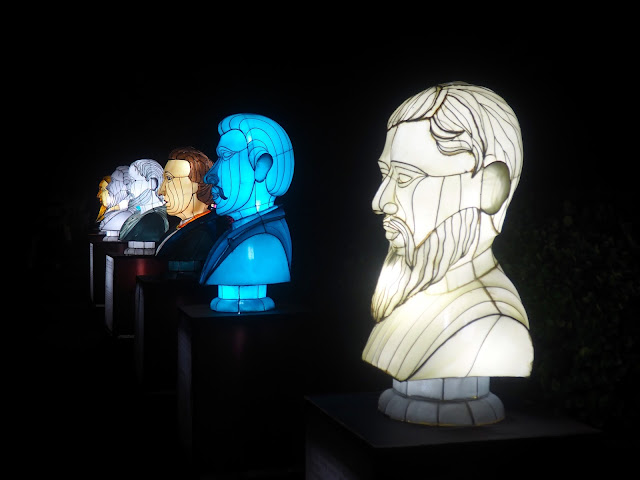 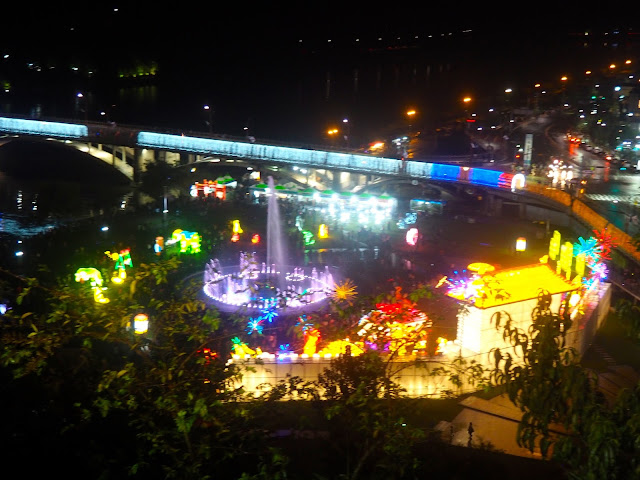 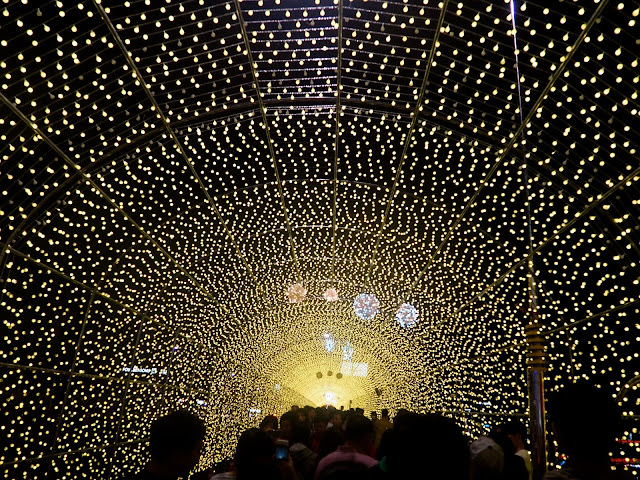 Eventually, we’d had our fill of the lights, and certainly felt like we’d covered the area pretty thoroughly. There was one last stop as we exited, one the pavement part of the main bridges, which were covered in tunnels lit by thousands of little twinkling lights, so it felt like you were under the stars perhaps. Then it was time to find the bus station and figure out how to get home. It is popular to stay over in Jinju, since the festival is a night time event, but there are late buses for those who don’t want to (up until midnight I believe), and everywhere was booked up for that night anyway. In comparison to lantern displays I’ve seen before, including in Hong Kong and Vietnam, this was certainly impressive in its size and range of lanterns, but nothing that dissimilar from what I’ve seen before. The fireworks made it a more worthwhile trip, so I’m glad to have chosen the opening night. If you’ve never seen Asian lantern displays like this, it’s definitely worth checking out; if you’re already familiar with them, it may be less exciting. I’m glad I went anyway, and experienced some Korean culture!

If you’re interested in visiting the festival, and trying to get there from Seoul, you might like to look at the Jinju Lantern Festival package from Trazy Crew, which includes a shuttle bus and admission ticket. I didn’t do this myself, but I am an affiliate for them.