Charlotte Fashion, Other
Now, after my last haul post I thought it would be a long time before I did another. A student budget means I can’t go out and buy masses of clothes every time I go shopping. However, unforeseen circumstances arose. I was on my way home from France last week, having completed the year abroad, when one of my suitcases was stolen from the train. This led to drama, frustration, tears, numerous explanations to officials and forms to fill in… the works. Long story short, I’ve had to replace a lot of stuff. I didn’t get everything at once, but there were some items I needed more urgently than others. I had to get new jeans, leggings, toiletries and such, as well as these items, but I thought I’d just share some of the more interesting ones.
First of all, I needed a new pair of heels, which may not seem urgent but I’m going on a trip next week where I might be in need of a pair. These came from Primark, and I struck lucky as they were the very last pair and happened to be my size! I love the colour of these more than anything else, and I also prefer solid heels to strappy ones, as they feel more comfortable and are more practical for year-round wear. It is a summery colour, so I’ll probably be on the look out for a black ankle-boot style like those I lost, but that can wait for now. 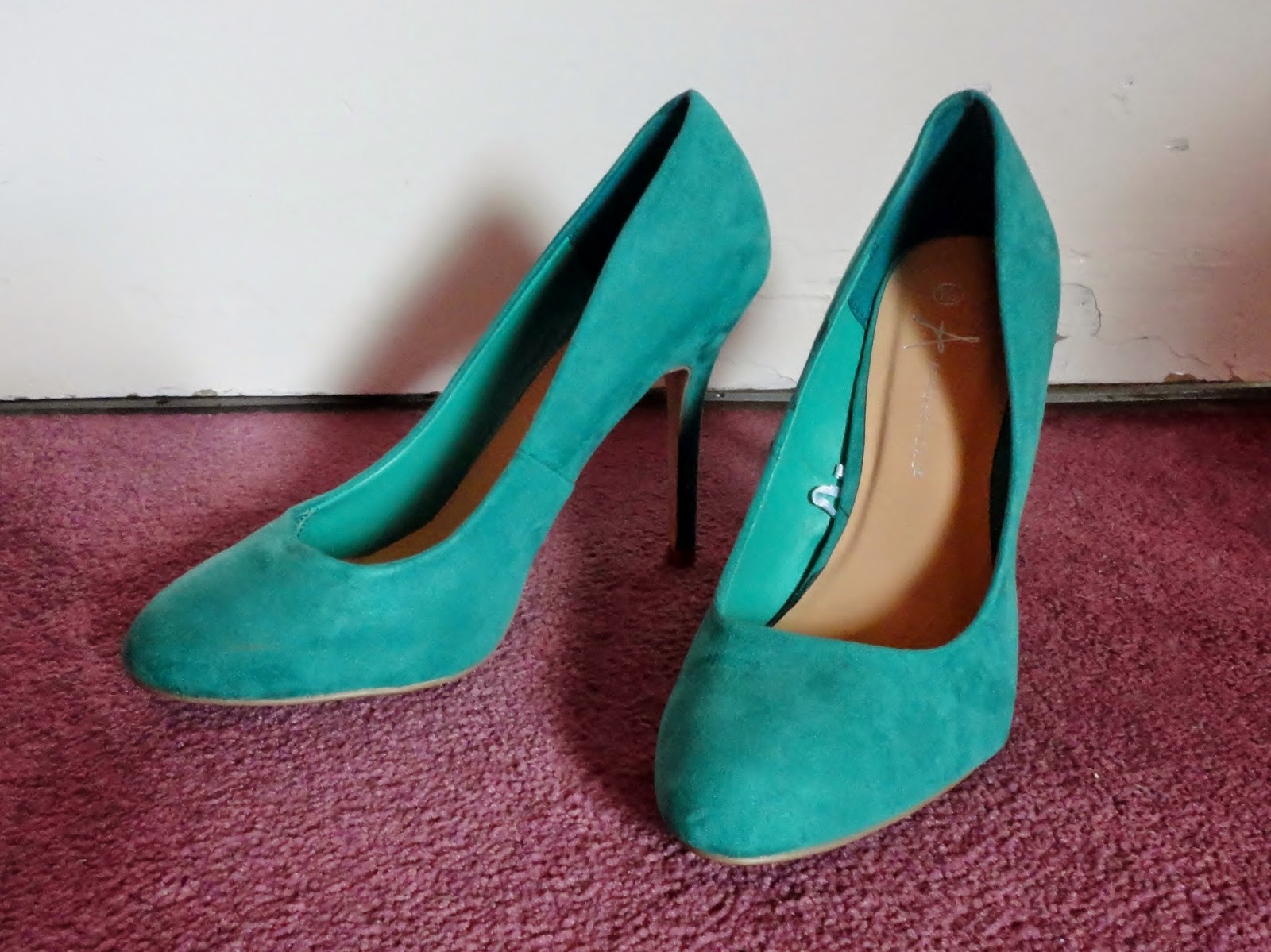 I lost several of my nicer going-out dresses, which I also need for this trip. The shops are all full of summer colours and styles just now, so as with the heels I’ll need some darker ones come autumn time eventually. However, I picked up this one in New Look, which I think will be versatile enough for day and night wear. I don’t always wear many patterns, but this one just looked so quirky and zany, and I love all the colours in it. 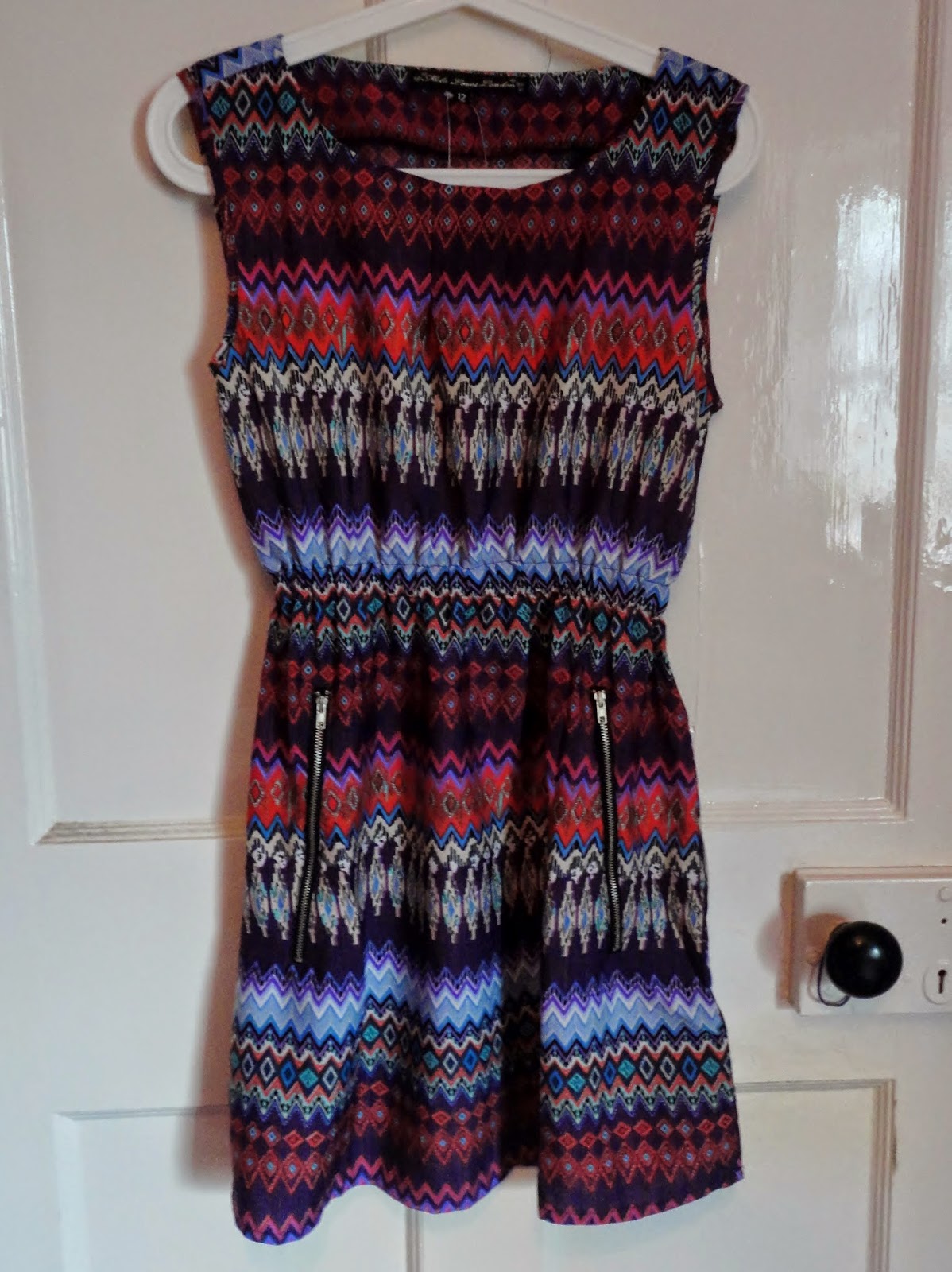 This dress was also from New Look, a shop I seem to get a lot of my dresses from, and this one is very typically me. I think this is a really pretty summer colour (purely coincidence/accident that it matches the heels!) and I’m a big fan of lacy patterns. I like the sheer bit at the top, with the sweetheart neckline underneath too, as it’s a little different to my usual high necklines, and of course the skater skirt and belt are my favourite style for flattering my figure. 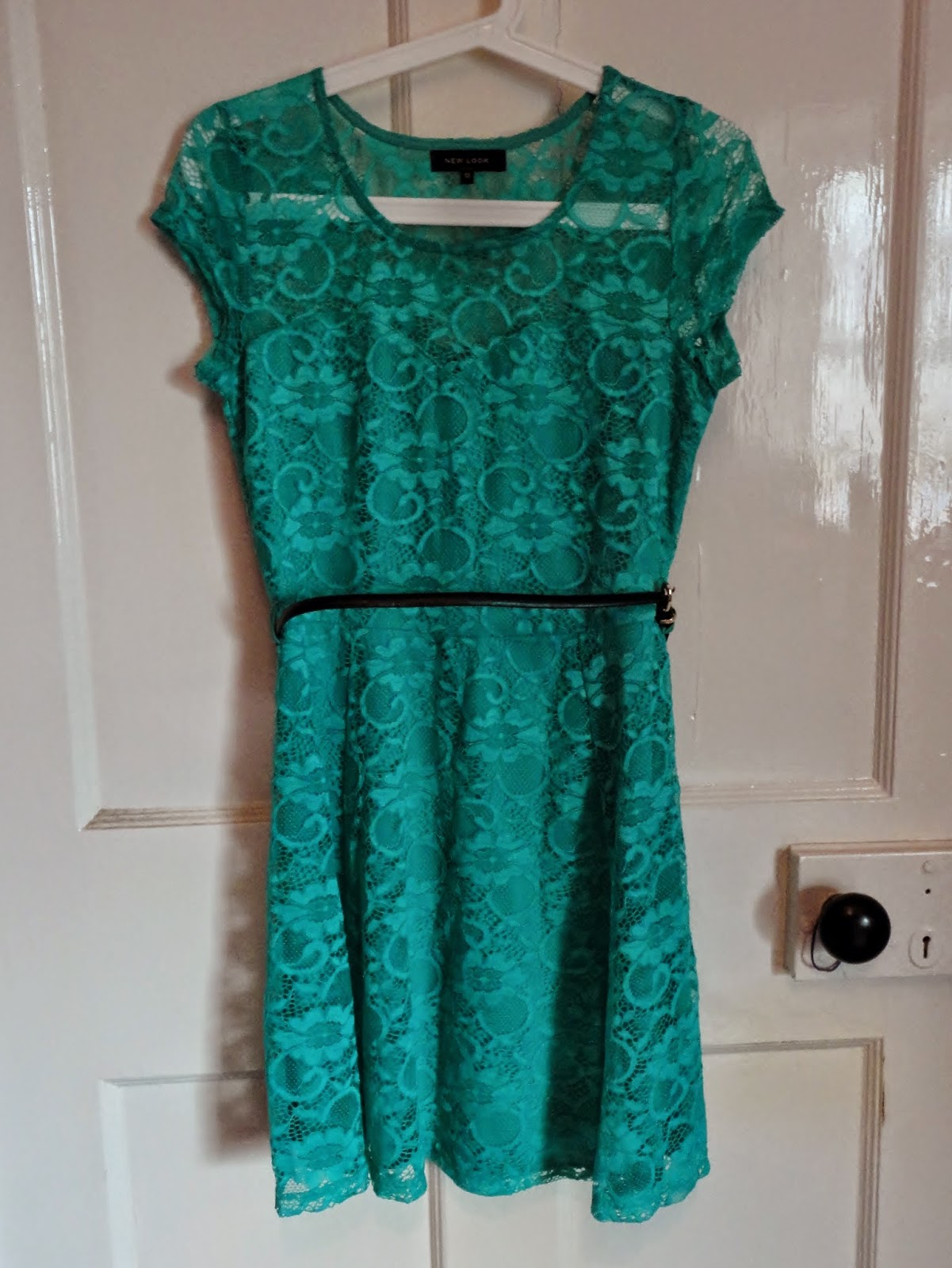 I’ve always had a pair of Converse for years now, so these were first on the list after losing my last pair (which were actually coming apart anyway), and Schuh is my go-to shop for them. I’ve had various colours and styles over the years, so decided to change it up again with this nice burgundy colour. I stuck with hi-tops, as I prefer them to the low ones I’ve had before, but couldn’t find a double soled pair again. I’m still pleased with what I wound up with though. 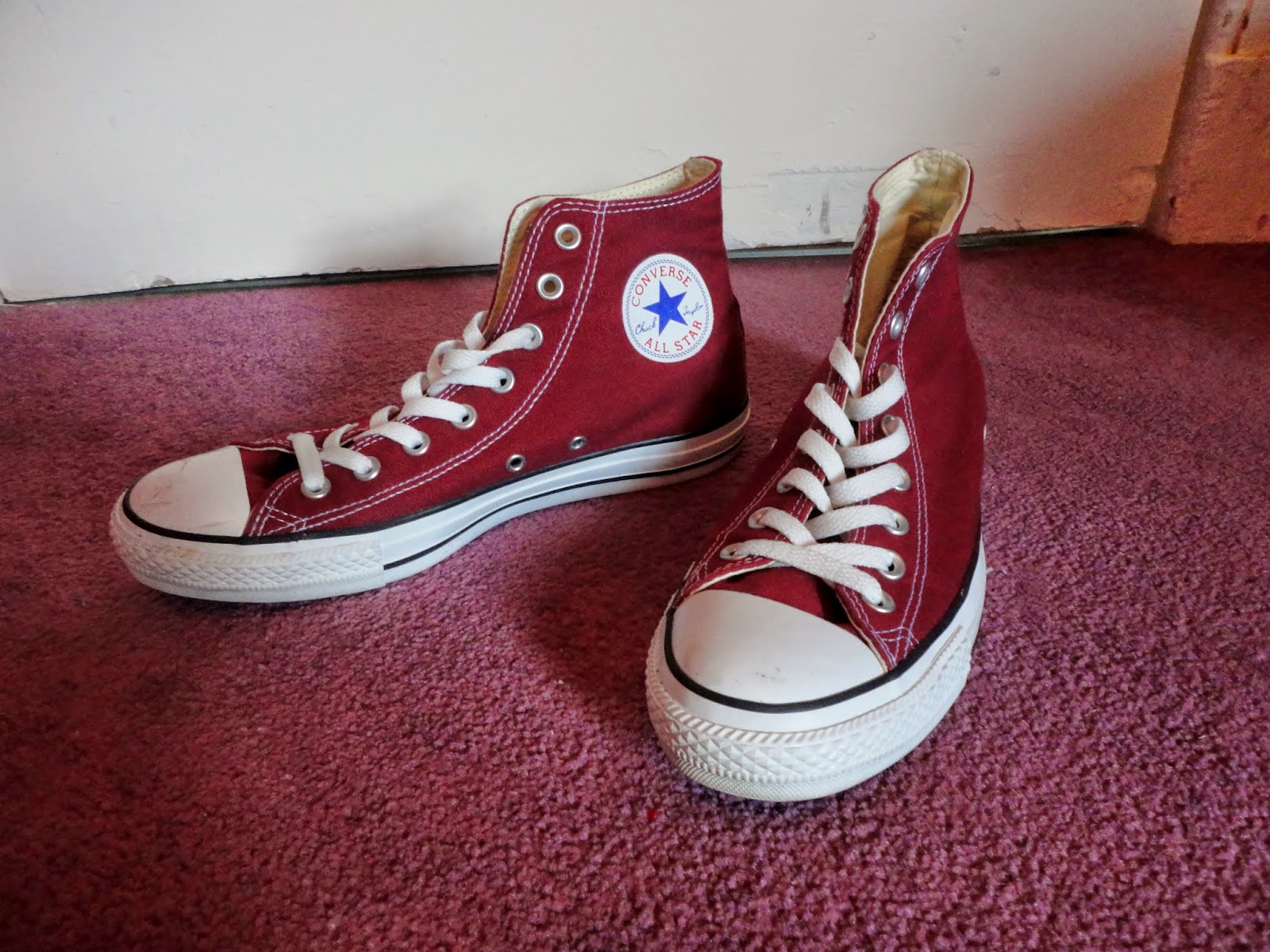 The loss I was most upset about was that of my jewellery case. As I was away for nearly eight months, I had taken a lot more with me than I would for a short holiday, so my collection is seriously depleted, and as most of it came from market stalls and tiny shops abroad it’s basically irreplaceable. I’ll end up replacing it all gradually from the same sorts of places, but to start off with I picked up this necklace in Accessorize. I like pendants on long chains like this, and the elephant was too cute and intricate to pass up on. 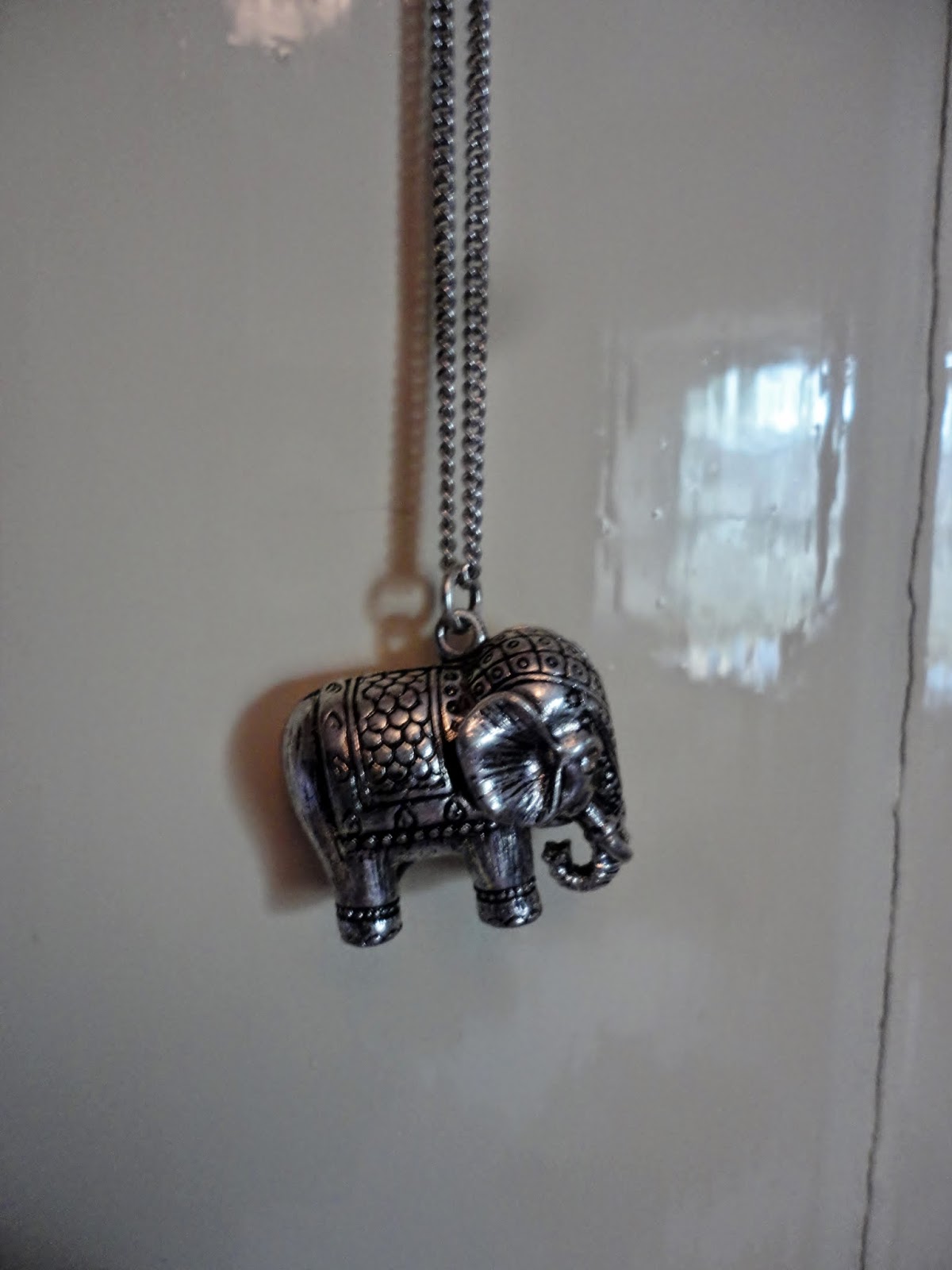 So, while I’m still sad about losing a lot of things, I guess one of the only good results of this is that I’ve been able to get lots of nice new things, and not feel guilty about spending so much! And this is only a small dent in what needs replaced, so I’ll be picking up bits and pieces for quite a while I expect.