If you haven’t seen the first part of my Doors Open Day posts, check that out here. Or, to summarise, last weekend Edinburgh opened up a bunch of buildings that you can’t normally access for free. Some were only open for one day or the other, so we went to places on both days, to make the most of the weekend, focussing on ones that we couldn’t see at any other time (some of them are open the rest of the year, but with an entry fee). 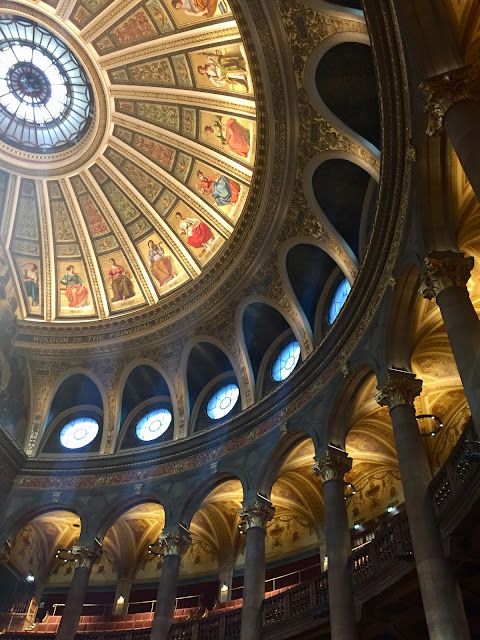 Our first stops for the Sunday were buildings I have actually been to before, since they’re part of the University of Edinburgh, but I only really went for exams and therefore couldn’t take photos or explore much of the buildings. The first one was McEwan Hall, which is normally where graduation ceremonies take place, but it was being refurbished the year I graduated, so mine was in the Usher Hall instead. I wanted to check it out since the renovations were completed though, which cost a whopping £33 million. The hall was first built in 1897, by a donation by the brewer William McEwan, and is located in Bristo Square, part of the university’s most central campus. The renovations included the addition of an entrance hall in front of the main building (which kind of ruins the view in my opinion), so you have to go in there and through an underground passage to reemerge in the main building.

The main hall is the star of the show of course, a huge circular room, with balconies of seating over three levels, and benches along the back of the stage area where the academic procession sits during ceremonies. Graduates would normally sit in the floor area (where the exam tables were too!), but it was empty that day so people could wander freely around. The building is absolutely breathtaking, with a huge central chandelier set inside a dome ceiling with paintings of the traditional academic disciplines around it. There are several more large paintings around the room, as well as friezes and other ornamentation, and the balconies have their own painted, domed ceilings as well. The back wall is occupied by a large organ, and you could go up close on the stage, even sitting in the large central chairs, typically reserved for the Principal of the University and other such guests at the ceremonies or other events happening there.

We were also able to explore a couple of the other parts of the building, by passing through the door beside the stage, where there is the long corridor circling the building, and a stone spiral staircase which took us up into another hallway. Even these areas are impeccably designed, with more chandeliers and domed ceilings, as well as a mosaic tiled floor and other sculptures dotted around. We were able to climb upstairs to where you would normally enter the balconies, but these were sealed off that day, which was a shame as I’d been hoping to admire the room from above as well. Still, it doesn’t lessen how stunning the whole place is! 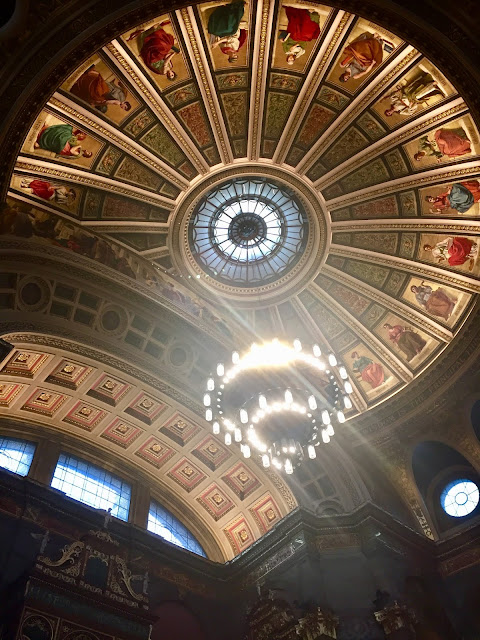 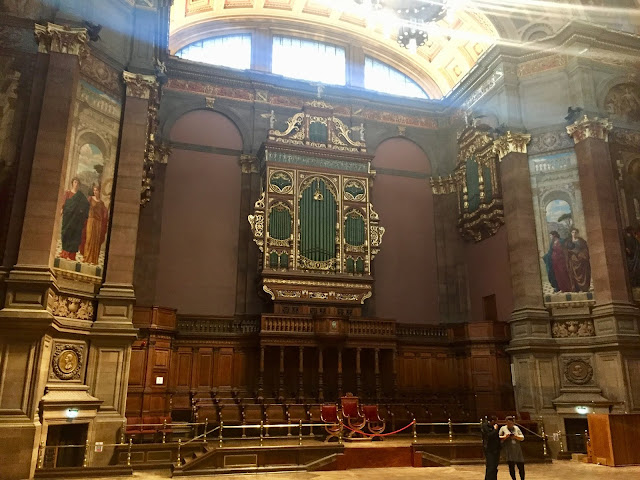 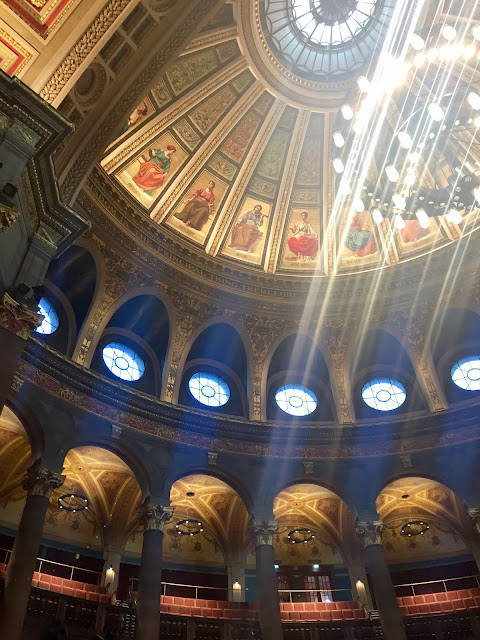 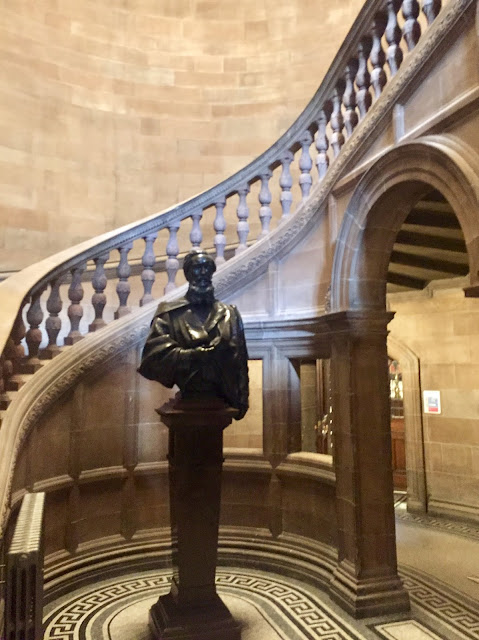 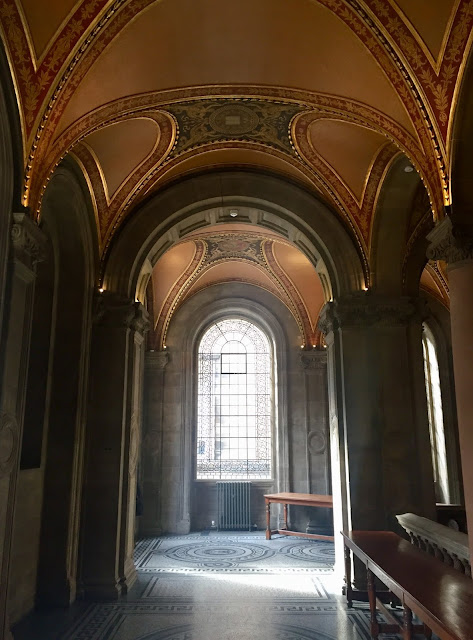 We then headed over to Old College, which I did have class in for one semester (a social anthropology tutorial), but in a tiny back room that was fairly nondescript. It houses the School of Law, hence my not spending much time there while a student, but there are much more impressive areas than that classroom I used to go to, so I was curious to see more. We entered on the left of the quad, where the main reception is, and immediately followed the stairs up into a long hallway, which I instantly recognised from sitting an exam here once. It’s the Playfair Library – designed by William Playfair, who is responsible for many of Edinburgh’s most impressive buildings – though all the books are in locked cases, since it’s not a lending library for students, like the Main Library. It’s now mostly used as a venue for special events! We were more interested in admiring the beauty of the room though anyways, wandering up and down the length of it, and checking out the names on the busts around the room, of famous alumni over the centuries.

At the far end, we inadvertently entered the Talbot Rice Gallery, which is open year round, and we took a brief wander through it to see what was on display, but quickly concluded that it was some fairly modern art that just wasn’t to my tastes, and I didn’t understand in the slightest. We headed back through the library and downstairs again, where we were able to see a few other rooms in the building, which look to be used for meetings, or possibly seminars and similar smaller gatherings. It almost felt like walking through a house at times, with the rich carpets, large fireplaces, and splendid furnishings throughout – far fancier than any room I had classes in! Only the big wooden tables, and the computer in the corner of each room give away their real functions. It was an area I would have never seen while a student, so it was interesting to see some of these more formal academic venues. 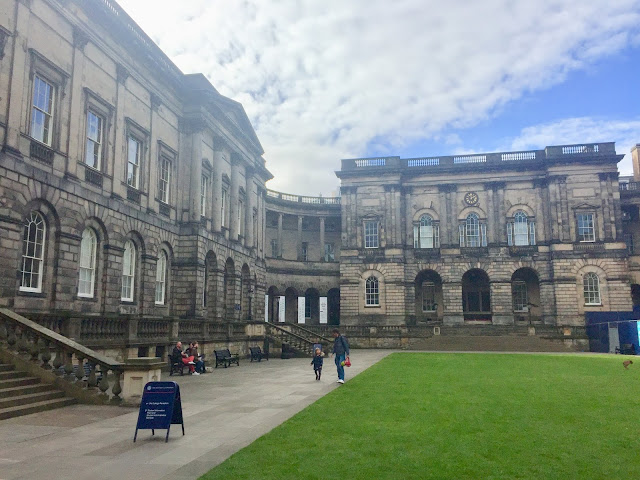 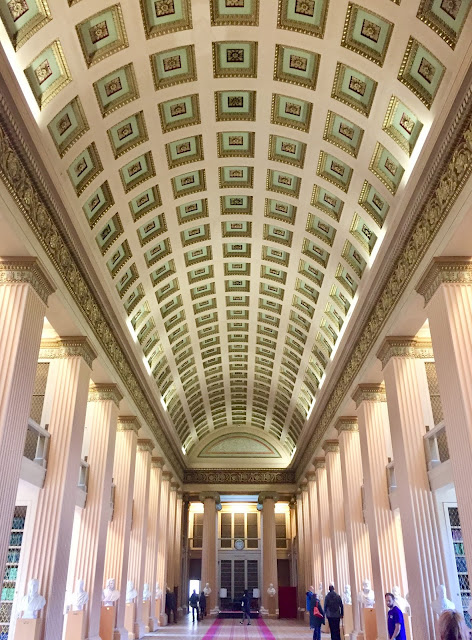 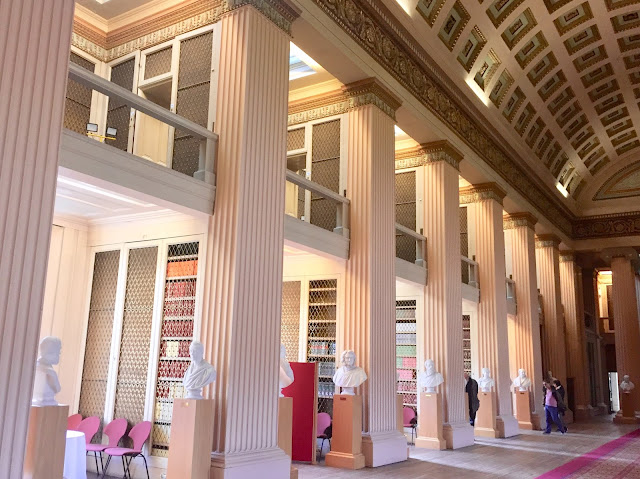 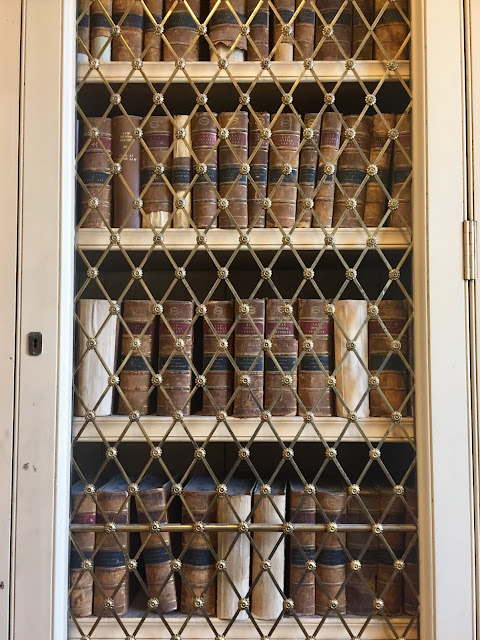 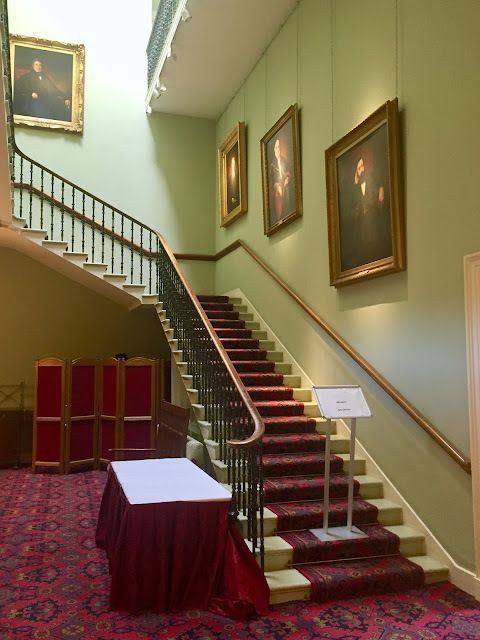 After that, we headed over to the New Town, specifically towards the Water of Leith, where the Dean Gardens were open for the afternoon. There’s a public walkway that’s always accessible on the south side of the river, but on the north side, stretching between the Dean Bridge and Stockbridge, there’s a private garden, which is normally exclusive to people who live in the nearby catchment area and who pay an annual subscription for their access. It was a pleasant area to wander through (although not worth the annual fee in my opinion), especially on a dry day with the autumn colours starting to appear. The waterfall viewpoint was a nice place to discover, and there’s a play area for children as well. It also offers a wonderful view of St Bernard’s Wall, which you can only see side-on from the public walkway since it’s on the south bank as well, whereas from the Gardens you can see it from directly opposite.

We actually headed around to the Well afterwards, since it was also open for the day. Normally you can only see the outside, but they open the gate to the upper section, and open up the room below where the actual well is on Sunday afternoons. You can go any Sunday during the year, but since we hadn’t been before, we figured we may as well take this chance. The well is thought to have healing properties, which is why the structure was built around the spring. The lower room houses the well, where you can pump the handle to extract some of the special water, and the room itself is also worth admiring, with its tiled ceiling design. The upper portion houses a statue of Hygeia, the Greek goddess of health, which is also why the whole things has a Grecian design to it. 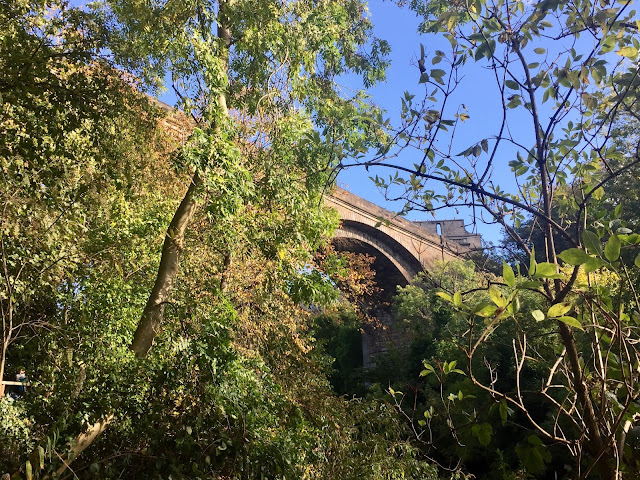 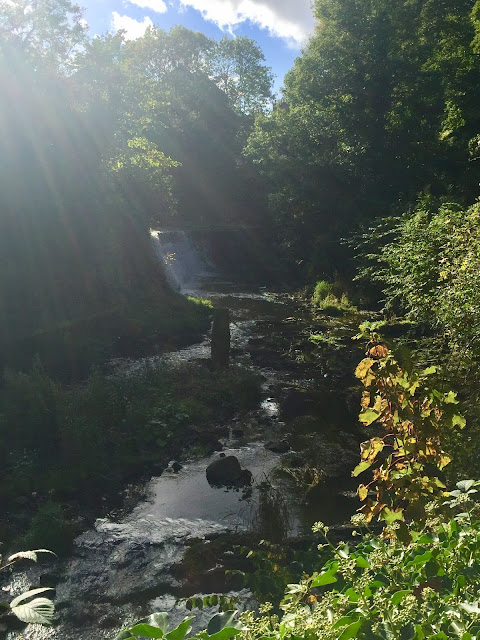 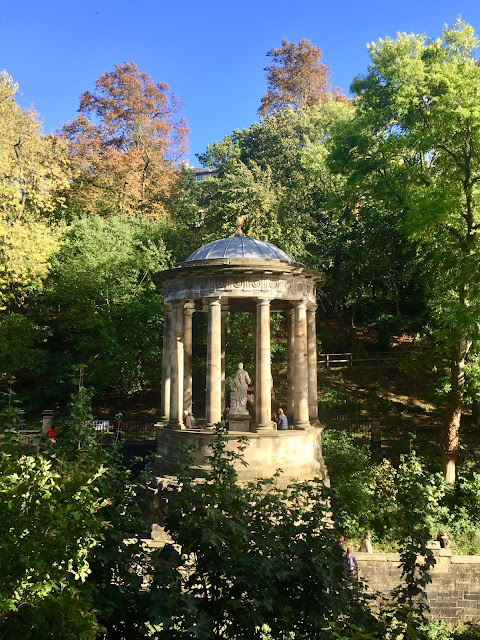 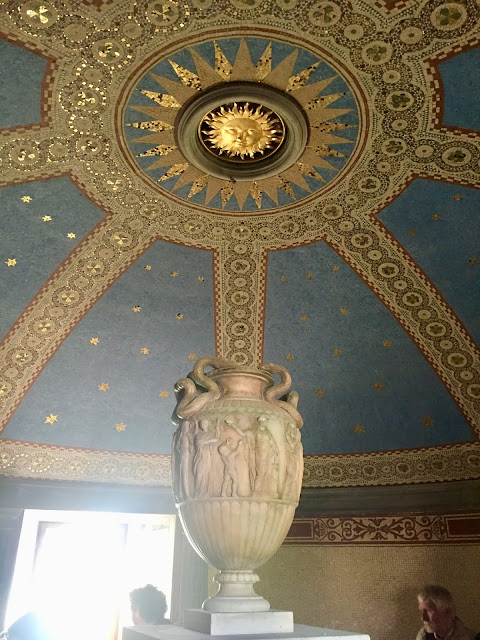 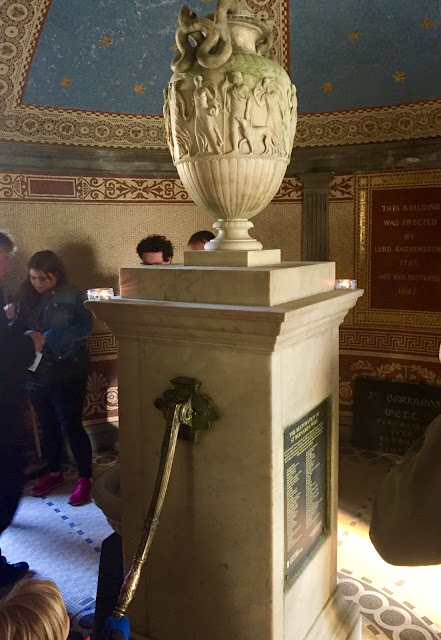 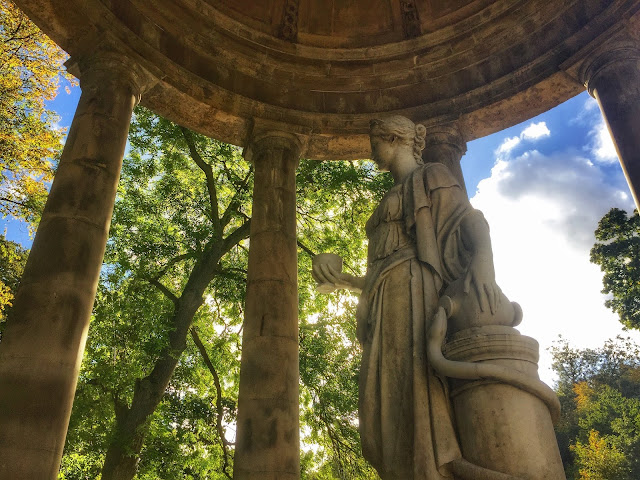 From there, we wandered along to the Stockbridge market, to finish our day up with a late lunch from there. It was interesting to see all these places that you can’t normally access, although there were too many to see all in one weekend – there are so many others we had to skip, but which I would either pay to see at other times of year, or will have to be quicker to book tickets for next time around!