This past weekend I ticked off one of the top places on my list of things to see in Busan, and that was Gamcheon Cultural Village. A lot of places around here that I’ve seen so far have been nice, but they’ve mostly been beaches or shopping areas and such, that you would find in many other cities too. Gamcheon is something a little more unique to Busan, and is also just so pretty, that I was very keen to explore it. It’s a region of town built into the mountainside, near the harbour (only a couple of subway stops from Nampo, where I live), which was long known as a poor, slum area of the city. Up until a few years ago that is, when it received an artsy makeover, the buildings now decked out in a rainbow of colours, and quirky murals and art installations all around, which have made it a popular tourist sight to stroll around. 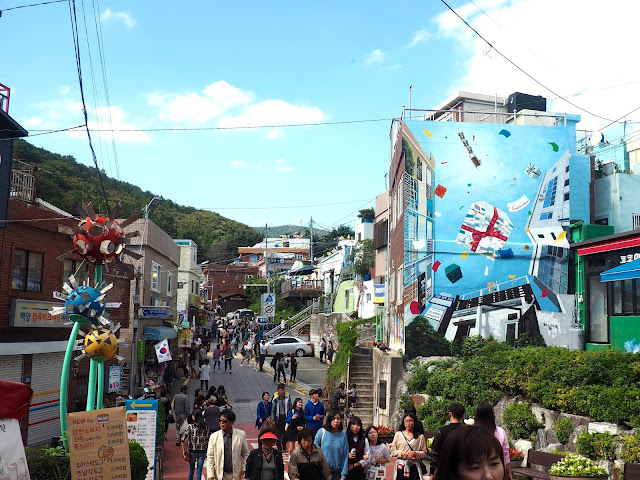 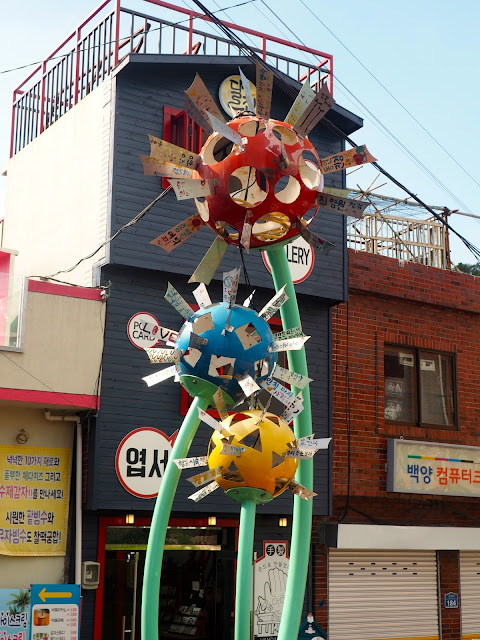 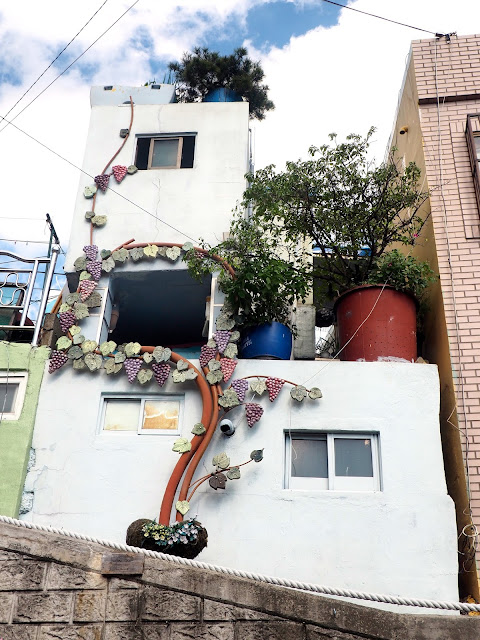 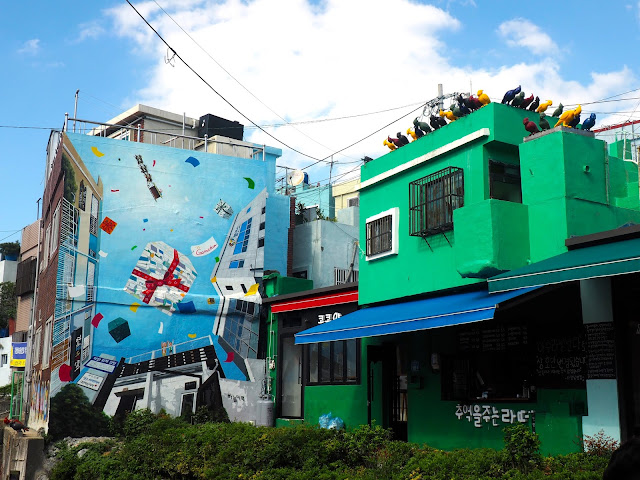 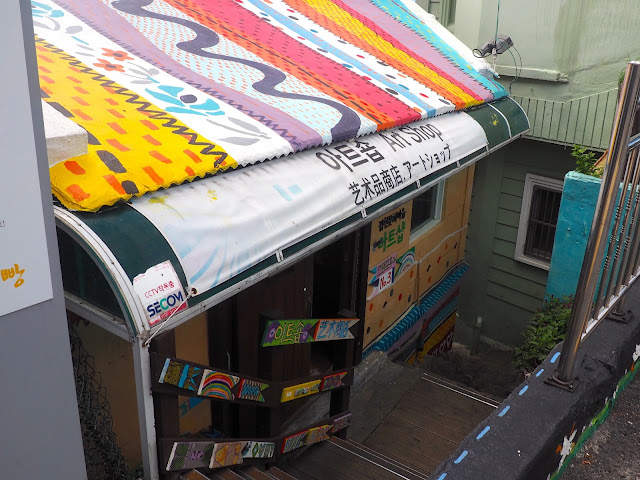 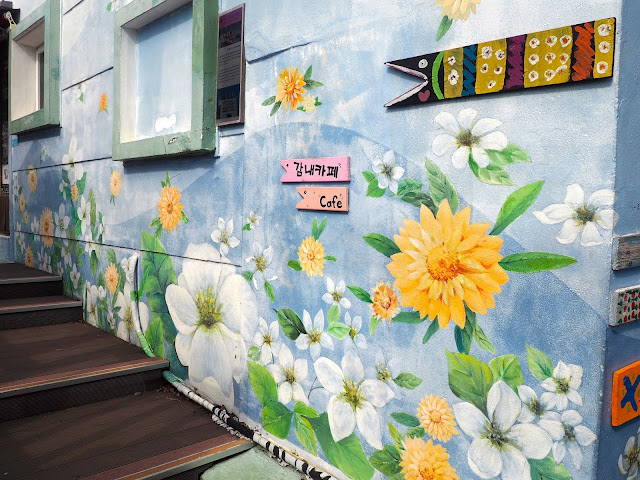 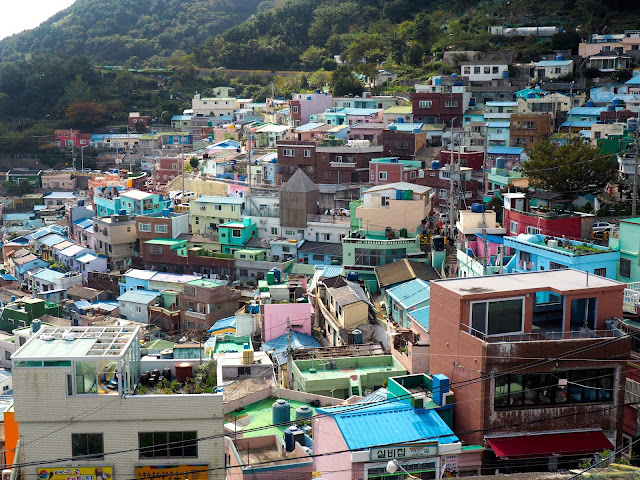 I headed there early on Sunday afternoon, getting the subway to Toseong, and then opting to walk the 15-20 minutes up the steep hill to the village entrance (there are buses too, if you don’t fancy the uphill trek). There is no cost to enter and explore the village, but you can choose to buy a guide map from the information office at the entrance, which is only 2000 won. The map has a stamp scavenger hunt on it, which takes you around the village walking course, and you get a couple of postcards if you complete it. Or, you can go without and just wander the streets, but I decided the get the map, which also has some information about many of the art pieces around, and figured I may as well do the scavenger hunt since I had it. As you first enter the village, it’s a wide street with many shop and cafes on either side, and you’re immediately hit with a wave of colours and patterns from all the beautiful artwork on display – my photos will probably do a lot more than my words in this post! I saw lots of fun street art when I was in Suwon last month, and this reminded me of a little, but since every house in the village is painted a bright colour, the overall effect is quite different, as you feel like you’ve walked into a child’s storybook. As well as paintings, I saw coloured birds perched atop buildings, a large metal flower-shaped statues, a series of plant holders made from jeans that looked to be walking along the street, and buildings with additions to look like a mug or a lighthouse. Some spots are particularly popular for photos, like the Little Prince you can sit next to and look down over the village, and I couldn’t always squeeze in an empty photo between punters. Other times I waited for my window, like the Grand Budapest Doll Hotel, which was so quirky with its clock paintings and array of dolls and other random items attached to the exterior. 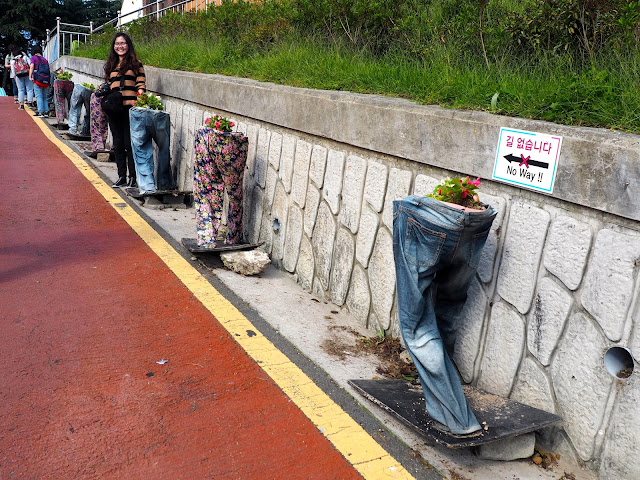 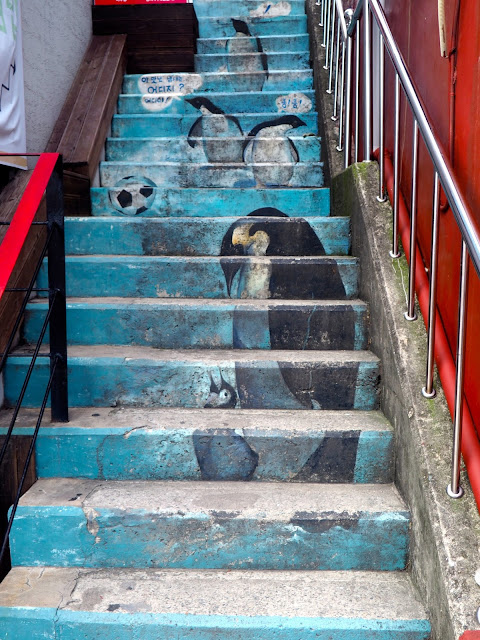 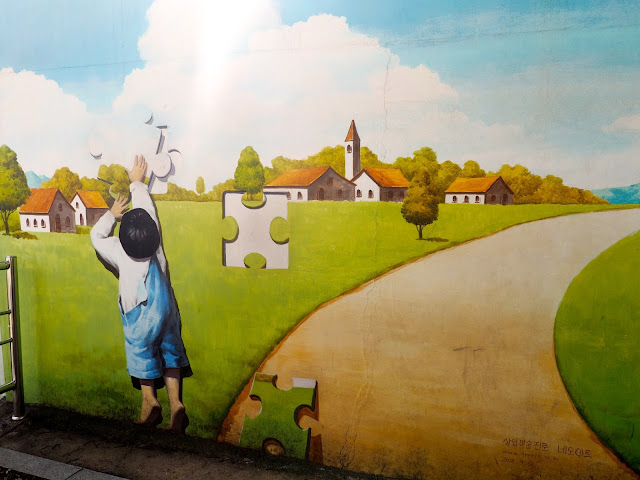 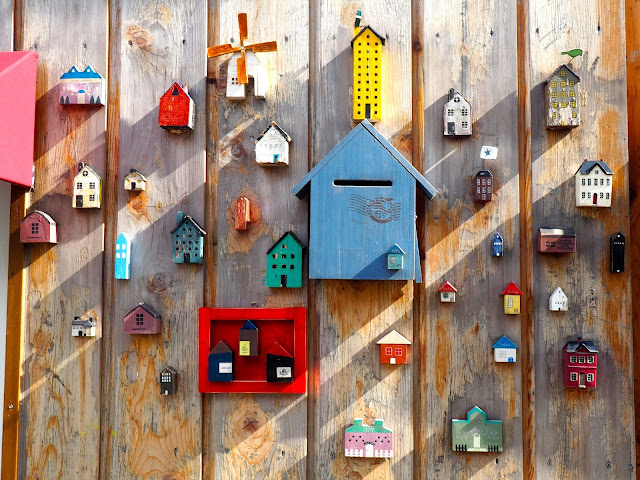 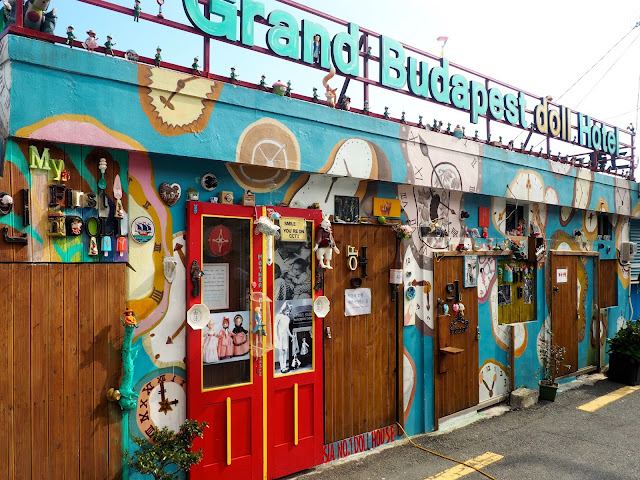 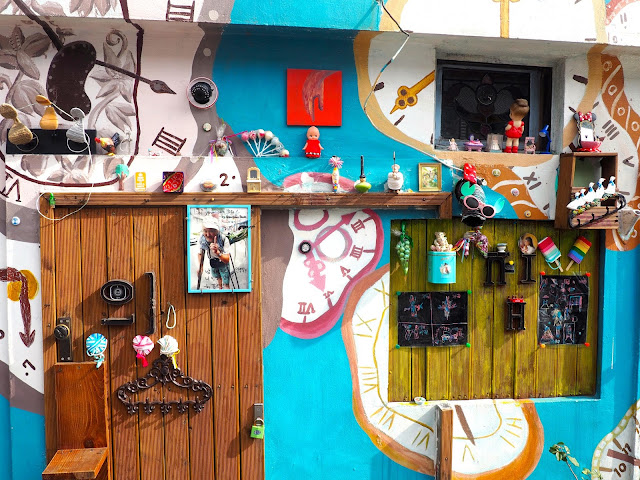 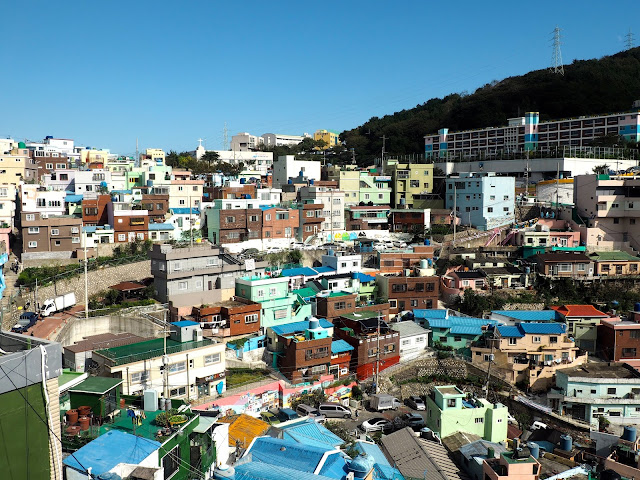 One of the features of the village are the fish signs lining the streets, which point you in the direction of the recommended walking course (handy if you didn’t buy a map), and there are thousands of them, all with their own unique designs. I particularly liked the street that had them arranged on the wall in the pattern of larger fish. The walking course is a good route, as it takes you around the major artworks, and the majority of it is around the highest point of the village, so you can amazing views down over the rest, this maze of colourful houses. Speaking of the fact that they’re houses, it’s important to remember as you’re walking around, that these are people’s homes, and it’s nicer if you aren’t too loud, don’t disturb them and respect their privacy. Not every building is a home though; a few are buildings solely housing some sort of at installation, like the House of Light and the House of Wind. Wind was one of my favourites, a display made from mirrors and coloured wires stretched across the room. These are down some of the narrower streets, winding through the hillside, which also involve some tiny back alleys, with plenty of fish to lead the way. There are a couple of random sort of detours you have to take if you want all the stamps, as a couple involve basically finding the stamp then doubling back on yourself, but since it was a nice day and I had plenty of time (and wanted the postcards!), I didn’t mind too much. 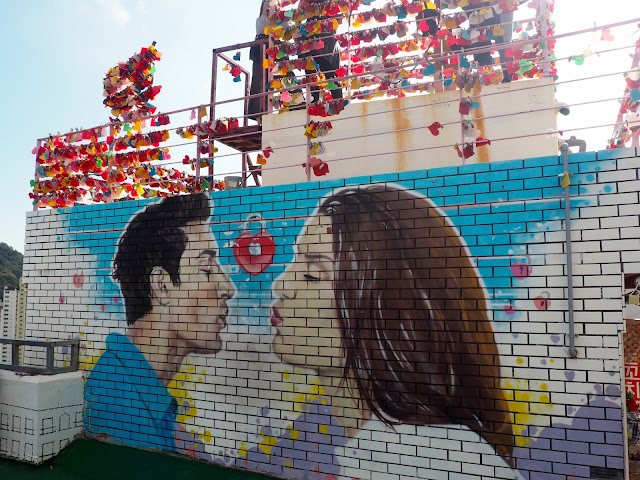 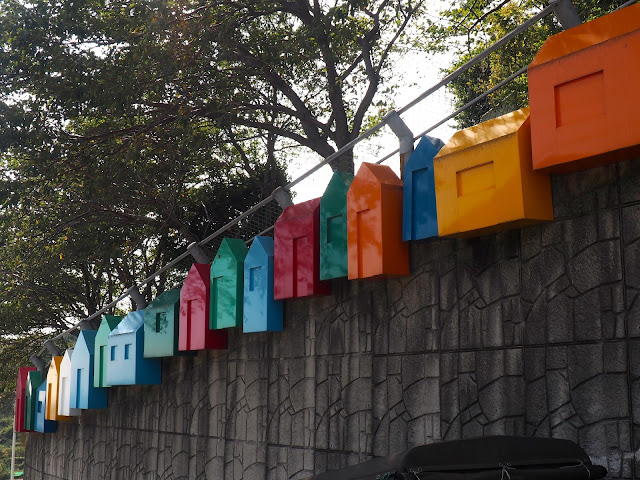 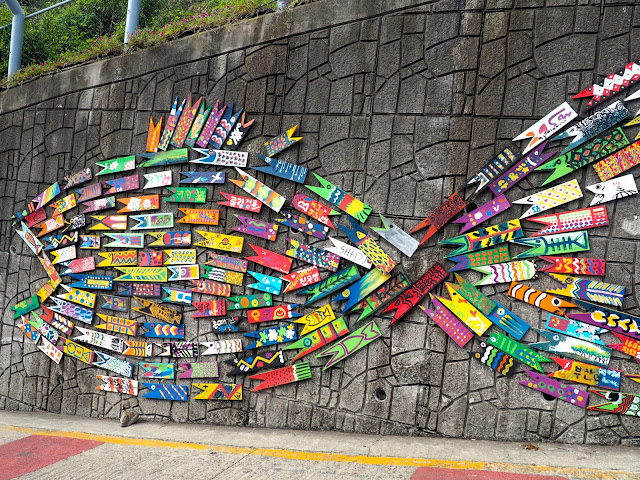 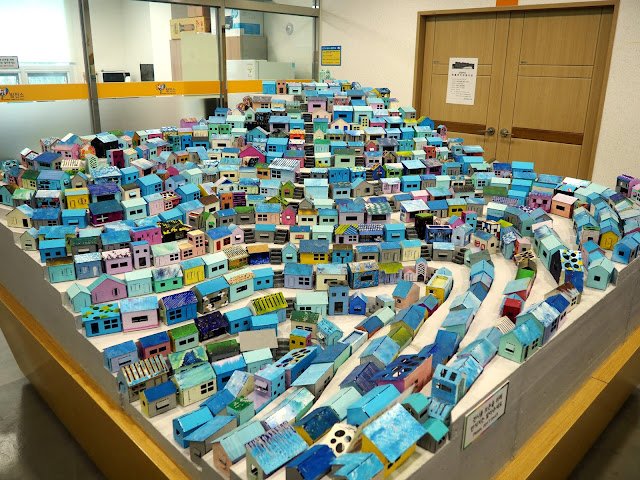 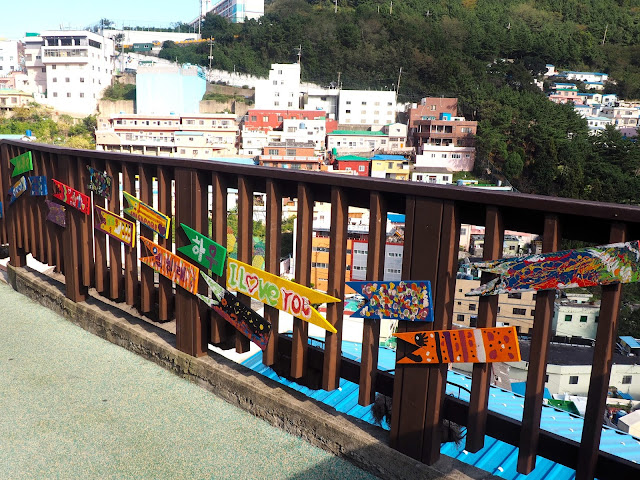 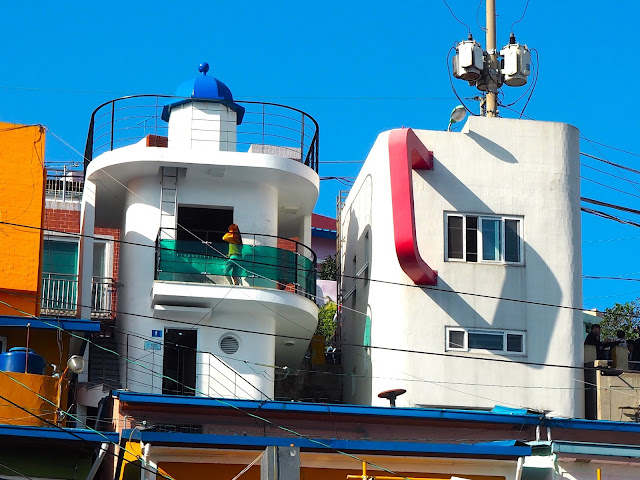 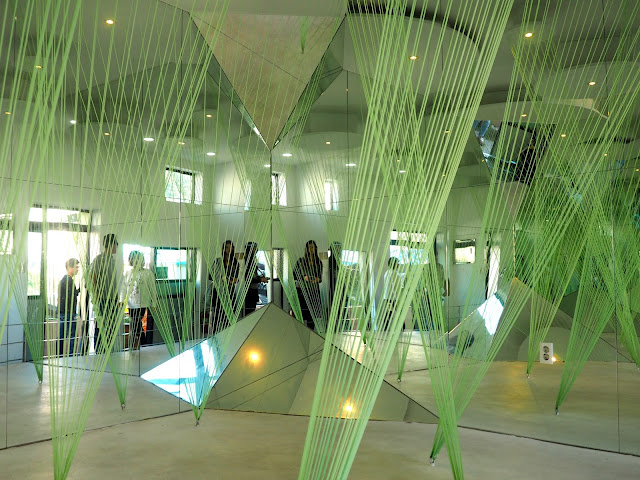 I completed the walking course in just under two hours or so (I did get a little lost at one point), and there’s interesting things to see right until the end, like the colourful ‘Village Wriggling’ near the final stamp location, and the ‘Becoming One With Gamcheon’ piece, which features silhouettes of people painted to match the landscape of the village behind them. I looped back to where I had started, passing the information point again, and went in search of a coffee to end my afternoon. By a bit of luck, I think I chose one of the best cafes in the village. I entered and ordered my drink, then the lovely lady working there quickly ushered me to the stairs, encouraging me to go see the view. And what a view it was; climb a coupe of flights of stairs, and you sit on the rooftop with a perfect, uninterrupted view down over the while village, all the way down to the sea. I’d gotten several similar views throughout my walk, but this one was the best angle, and with nothing blocking it; spectacular! I don’t remember the name of the cafe, but it had a sign that said something about rooftop ocean view I think, if anyone else were looking for it. As well as numerous other cafes, the village also has lots of shops selling interesting, arty goods, usually handmade by locals in most cases. It was nice to peruse, and certainly suited the colourful, artsy surroundings, though I didn’t buy anything myself on this particular visit. 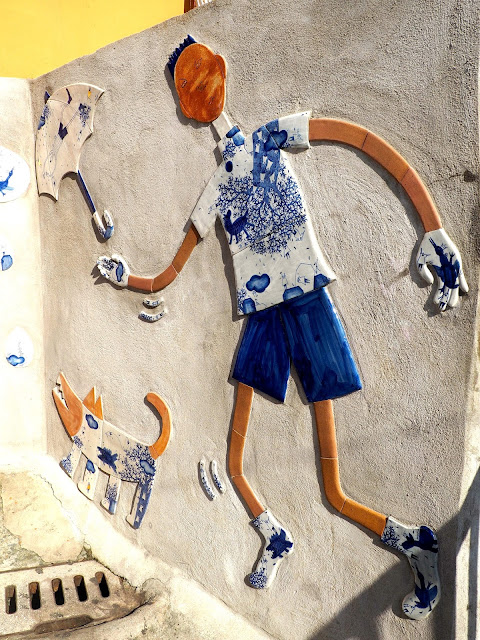 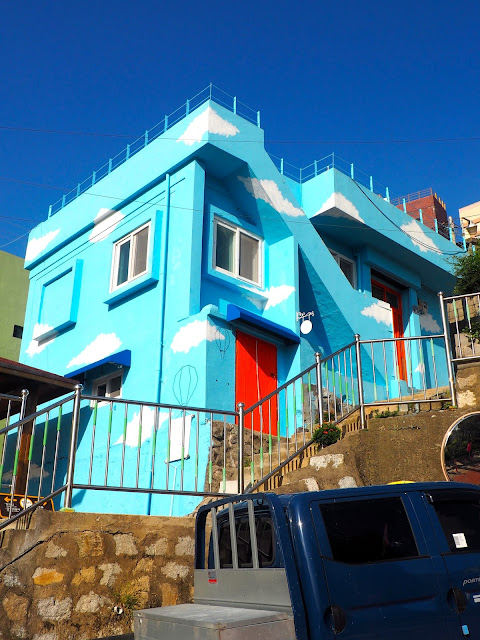 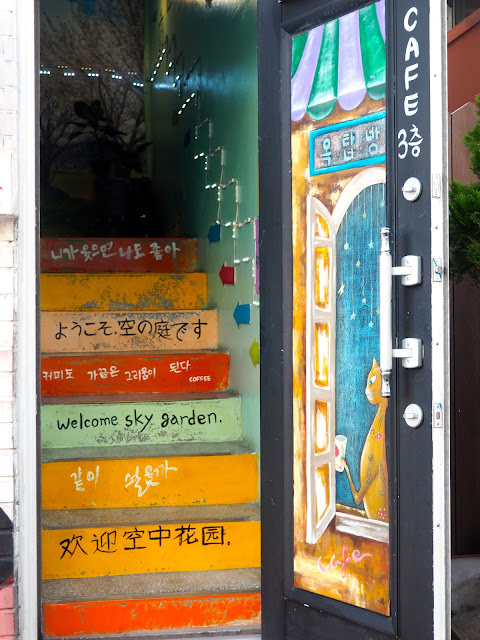 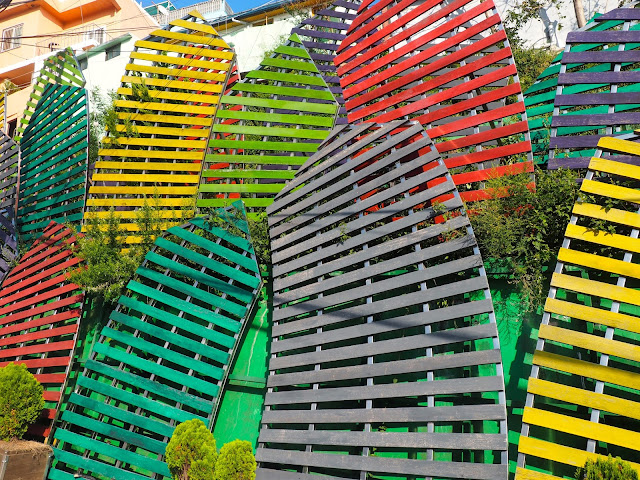 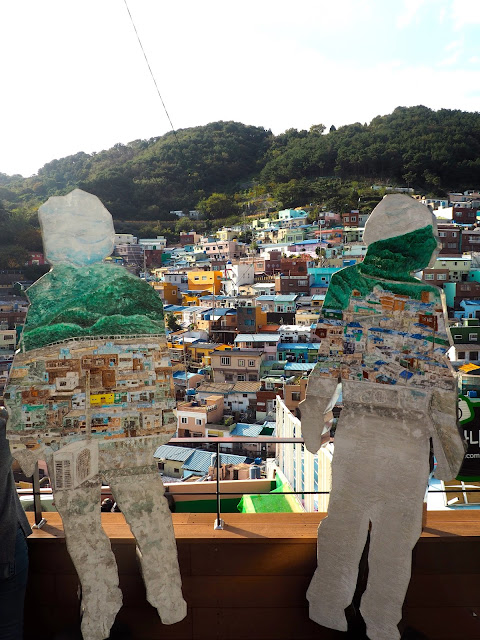 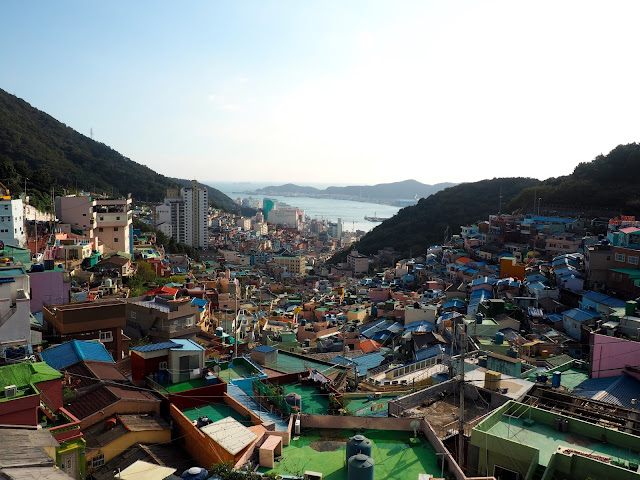 Eventually, after lots of walking, I was starting to get chilly, and had thoroughly explored the village, so I headed back down hill (much faster than I’d come up!) to the subway, and home again. I would highly recommend a visit to Gamcheon for anyone who finds themselves in Busan. It’s definitely one of the more unique places I’ve visited, not just in Korea, but throughout my travels, and makes for such a nice afternoon stroll, with some shopping and coffee thrown in, and so many beautiful and interesting things to see.

If you’re interested in visiting Busan yourself, you may want to consider the Busan 1 Day Small Group City Tour from Trazy Crew, which includes Gamcheon. I have not done the tour myself, but would like to recommend it as an affiliate (I will receive commission on bookings).