Charlotte Other, Travel
Well getting from Battambang to Koh Rong was a mission and a half. I mean, I knew this when we made our travel plans, but actually executing them was exhausting. We took Mekong Express buses, having read online that they’re one of the better bus companies in Cambodia, and we made it out alive, which was the main thing! They’re actually more like minibuses, and you get air con and water, so it’s not all bad. However, our driver didn’t give us the smoothest of rides, but I don’t know if that was his driving or Cambodian roads. Anyway, first we had around 5 hours back to Phnom Penh, a couple of hours to wait there, then another 5 or so to get to Sihanoukville, on the south coast. We didn’t have the same stress of buses being late, as we did when leaving Siem Reap, but we did stop in the middle of a Phnom Penh market for about 20 minute, which was slightly disconcerting, and when you’re a bus-load of tourists, you tend to get some funny looks from locals. Fortunately, if turned out we were just waiting there for our last passengers. I saw some interesting sights along the way too, such as what were essentially carts of school children, and vans so crammed with locals that extra seats had been installed in the lid of the boot, which was hanging open with them sitting in it… Definitely not something that would be allowed in the UK! 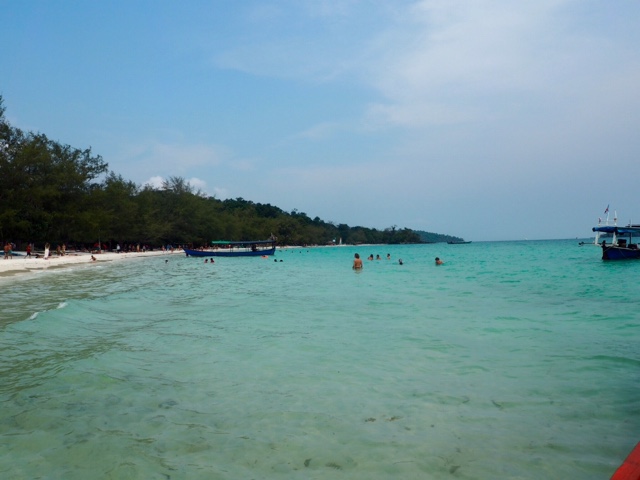 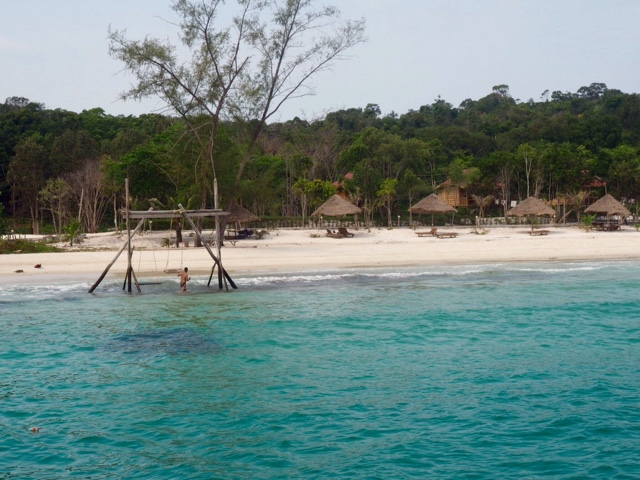 We stopped in Sihanoukville for the night, as our mammoth bus day was never going to get us there in time for the last ferry, at 3pm. We didn’t see much of the town, other than where we were staying and where we went for dinner. However, the walk to dinner did allow us to encounter some local children – and apparently all they knew to say in English was “Hello, money?”. One little girl followed me for a solid 10 minutes, just repeatedly asking I money, which we were not about to give them. Cambodia is a very poor country, but I’ve been warned in many places that giving people money, especially children, only encourages them to beg more, and the children won’t actually use the money for school, as they often say they will. This wasn’t the first time I’ve encountered this in Cambodia either, but these children were the most persistent! As we reached the busiest street, leading down to the beach, the locals gave way to masses of backpackers. And I mean masses. I know I’m likely considered a backpacker too, but these were the proper “gap yah” wander types, that I can’t stand, who make all those cliched claims about travelling, and complete obliterate the local culture, creating party towns like this. It made me pretty glad we were only there for the night.
In the morning, we headed back down that same street, where lay the pier to catch the ferry to Koh Rong. I was somewhat disheartened to see so many of those same backpackers waiting to catch the same ferry, but we were more than ready for some relaxing beach days, so I was willing to put up with them for a few nights. The ferry ended up running on Cambodian time, leaving an hour later than scheduled. I was getting pretty hot and restless, especially during the time we waited on the pier to board, and my mood was not best improved by the prospect of having to stand on board for an hour. I ended up squatting on a cardboard box, as the ill feelings from earlier in the week resurfaced, and I thought I’d pass out if I didn’t sit down. When we docked on Koh Rong, the beach front was nothing but hostels, bars and backpackers, which is never really the travel experience I’m looking for, but it turned out the accommodation we’d booked was on another beach, a water taxi ride away. So we waded out to the boat, our luggage was heaved aboard, and then a young boy began steering us away from the main beach! It turned out he was simply the co-captain to (presumably) his father, and the two of them sailed us there, getting my bag wet and knocking into the pier we arrived at in the process, but we made it in one piece! Nature Beach was a million miles from that other sight, a much quieter, more remote setting, which was far more what we needed, with both of us still feeling somewhat ill. 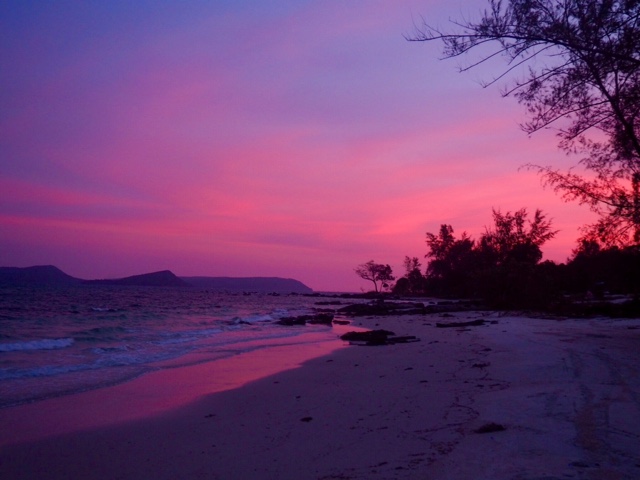 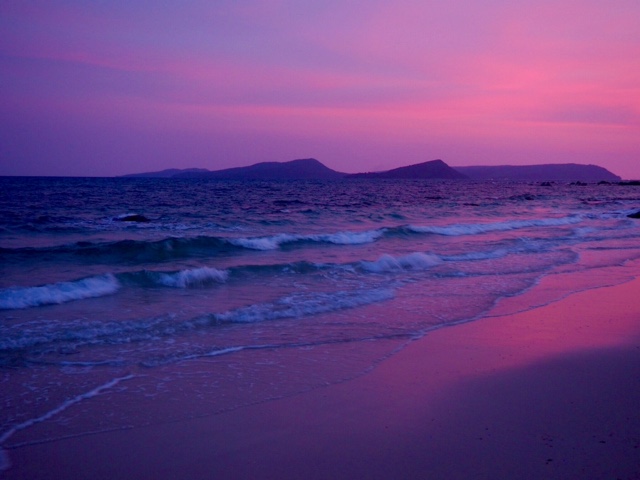 Our accommodation was nothing more than a tent on a wooden platform, but we willingly booked this, for something cheap and simple. The site had bathrooms and a bar selling food and drink, with power points available for use to, and a smattering of sun beds, umbrellas, hammocks and swings across the beach front. There were bungalows to rent too, but they were beyond our budget. The tent was uncomfortably hot, as well as just plain uncomfortable, but for two nights, it sufficed. I did avoid the showers though (I know, sounds gross, but I went in the sea at least?) as there were no doors or curtains on any of them, and I wasn’t keen on anyone seeing me that much in “Nature”.
We spent the remainder of the day sprawled on sun beds, me napping for the most part, then sitting by the bar, chatting, using wifi and the like. The food there was really good actually, or at least the toasties and burgers were – I had peanut butter and banana, then PB&J for the former for lunch each day, then beef and veggie varieties of the latter for dinner. The wifi left something to be desired, but that’s been true for much of Cambodia, and I think I’ve been spoiled by the speed of Hong Kong’s connection. There were backpackers among the other guests, but the place had a very chilled out atmosphere, with no risk of parties breaking out, and no one was talking in that wanker way that irks me so much. It was just a few drinks, good food, and some beautiful skies as the sun was setting! 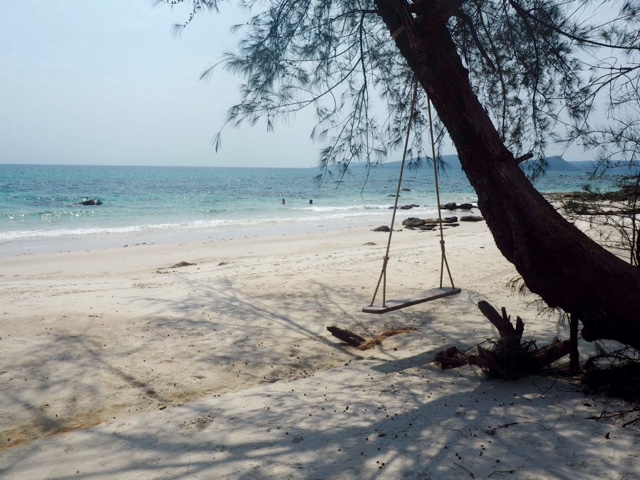 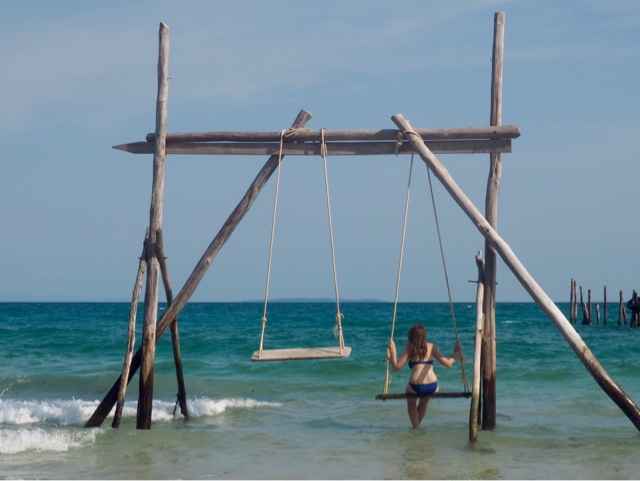 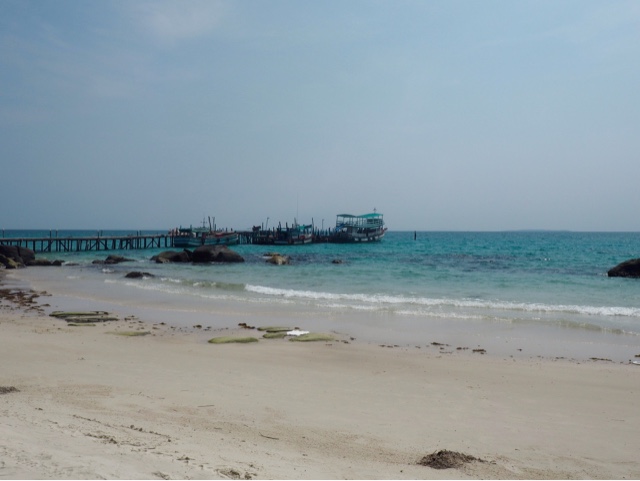 The next day was spent in an equally chilled out fashion, which we were so ready for after a week of travelling around and sight seeing. There was no lie in to be had, since as soon as I woke up, I was reminded of how uncomfortable the tent was, but I did slip in and out of consciousness on my sun bed throughout the day. We essentially set up camp on some beds for the day, picking a strategic spot spaced between the ocean and the bar, with plenty shade and near-but-not-too-near other people. I dozed, I used what wifi I could hold on to, and I finally read a bit more of the book I’ve been carting around all week (in my defence, we were sight seeing, catching up on wifi, sleeping or travelling to, and I can’t read in vehicles). I went for a swim later on too, and the blue waters were fairly clean, with just some seaweed drifting through. The beach could’ve been cleaner, what with various debris from the hotel lying around, and it’s far from the nicest island I’ve been to (see my Central America blogs!), but it serves is well enough for a day of rest. After my swim, I wandered over to the ocean swing too, and if anyone can get on the higher one then they’ve definitely got more upper body strength than me, as it was a struggle enough to haul myself on the lower! We had a bit of a funny photo shoot session, taking turns on the swing,  to get some shots like the one above.
That evening we tried to go in search of the glowing plankton that we’d read about, supposedly found all around the island. We’d been told you need complete darkness, so we walked to the next beach, away from the bungalow lights. We waded out to around waist level, and stirred up the water over and over, but all we saw was a few twinkly specks, and it was hard to tell if it was plankton, or the reflection of the moon, which we were keeping our backs to, but it was still very bright that night. We trod for a while, but eventually conceded defeat and went back to the hotel beach. Over dinner, we mentioned to the girl behind the bar who’d been talking about the plankton the night before that we’d had no luck, and she replied that we’d gone too early. Apparently it needs to be around 10pm, for the water to be cool enough for them to rise to the surface. So after eating, we decided to give it one more go. We trekked back to the neighbouring beach (luckily only about 20 minutes away), where it was undeniably darker than before – to the point where we began to freak ourselves out with potential traveller horror stories. We braved the black waters again though, but with no change in the results. We mixed up the water as much as we could, squinting into the darkness, but with nothing more than a few twinkles again. This time we really were defeated and went to bed. It was disappointing to be sure, but I’m sure one day I’ll be in another part of the world where glowing plankton live! I might even pay for a guided trip, to be sure I see them next time. It was a funny little late night swim though!
Overall, Koh Rong wasn’t the most beautiful or exciting place I’ve been, and possibly slightly more hassle to get to than it was worth. The couple of days of rest and relaxation was certainly what we needed though, and it was a pretty enough place to do it. It just wouldn’t be my first choice for a long holiday where I only wanted to relax. A nice spot for a few nights though.